This is where you'll catch us in Kennedy Town 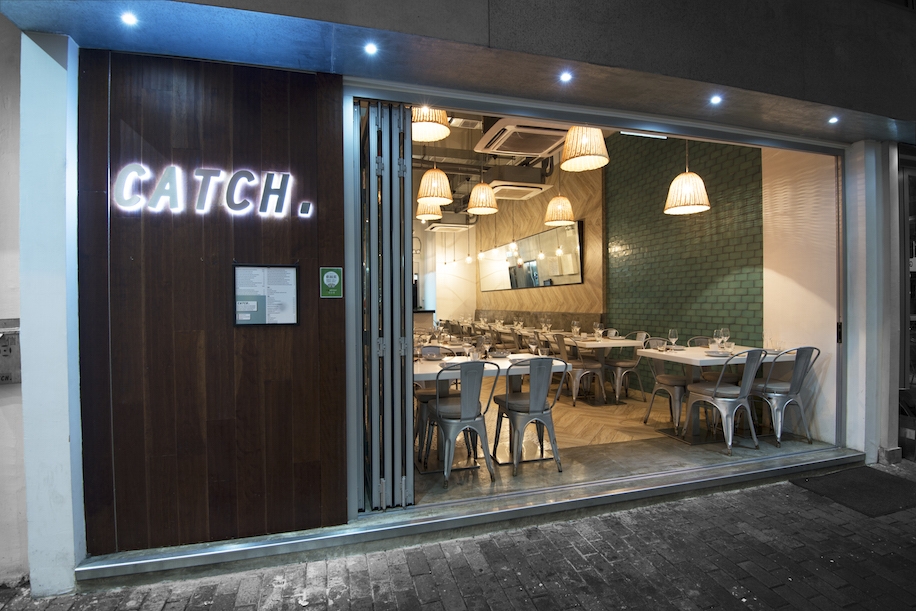 It's Monday night, and it's buzzing inside this hot little spot way up at the end of K-Town. Catchick looks like a quiet street from the outside, but that's probably because everybody is in here. The owner of Catch is Alex Malouf, also of the popular Mama Malouf Lebanese restaurant next door. This guy knows what he's doing – from the simple, rustic-chic decor, to the friendly, knowledgeable service, to the – most important to us – great food. It's not too dressed up; it's just good ingredients, simply done and done well.

We started off with a platter of Irish and American oysters ($210). Served with a striking sesame soy that added a nice accent and a tomato basil salsa that was a creative touch, these molluscs really shone on their own with just a touch of lemon. If you're an oyster fan, these are shell-set triumphs. The Irish is a brinier, slightly sweet version while the Americans offer a plumper, creamier shellfish. Valentine's Day may be done and dusted, but it's never the wrong time to take your taste buds out on a date. And this is where I would go to treat mine.

The prawns ($148) came simply served in a big ol' pint glass with baked bread and a lemon aioli sauce. The beautifully plated seared scallops ($148) arrived on a luscious cauliflower purée with a pop of colour courtesy of the vegetable-of-the-moment, a beetroot-pickled cauliflower floret, and bit of truffle caviar thrown in for good measure. This was a spectacular little dish housed in a pretty shell to impress the eyes and deliver to the taste buds as well. 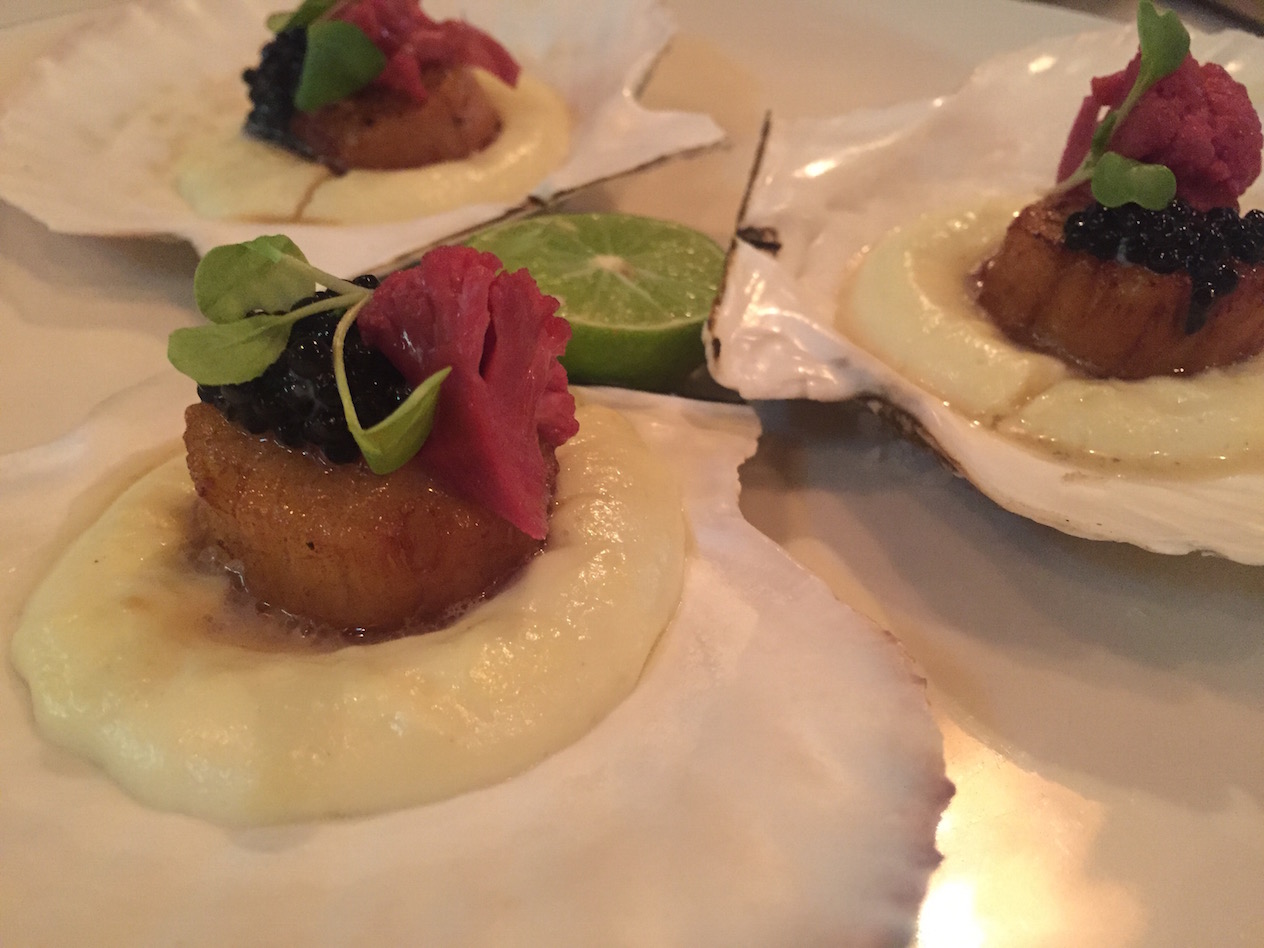 The beef tartare ($148) with poached quail egg was a solid offering, notable mostly for the innovative pairing atop thick potato skins.

We devoured the pulled lamb tacos ($148) doused with feta and a spicy yoghurt sauce, and we ordered seconds of the Parma ham salad ($148), which surprised us with slices of peach alongside its mozzarella, pine nuts and mint. Salads seem to be having a moment and becoming much more interesting these days, and Catch is definitely on that train. We would go in specially for the quinoa, halloumi, hazelnut and barley salad ($158), which was heaped with pomegranate.

We enjoyed the barramundi ($178) atop a bed of potato salad and broccolini. The dukkah salmon ($178) was a sweet-accented dish composed of Egyptian spices that crusted the perfectly cooked flakes of juicy salmon. This fish was served with orange lentils, currants and fennel. 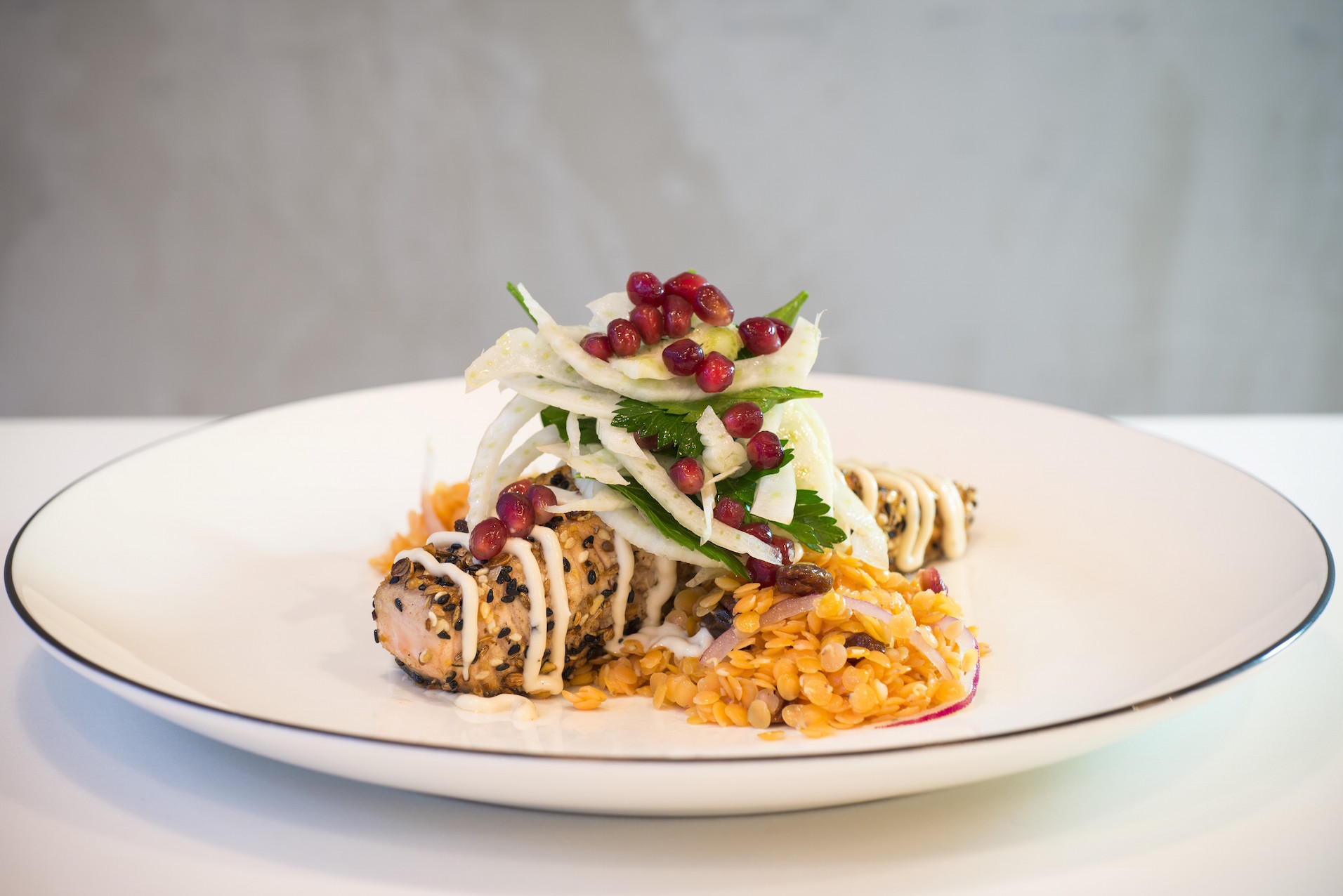 For us, linguine vongole ($168) is never the most appealing dish on a menu, so we were delighted that it may now be after sampling this flavourful option with its simple white wine sauce, with chilli and dill saturating every strand of pasta along with the fresh, brackish clams. 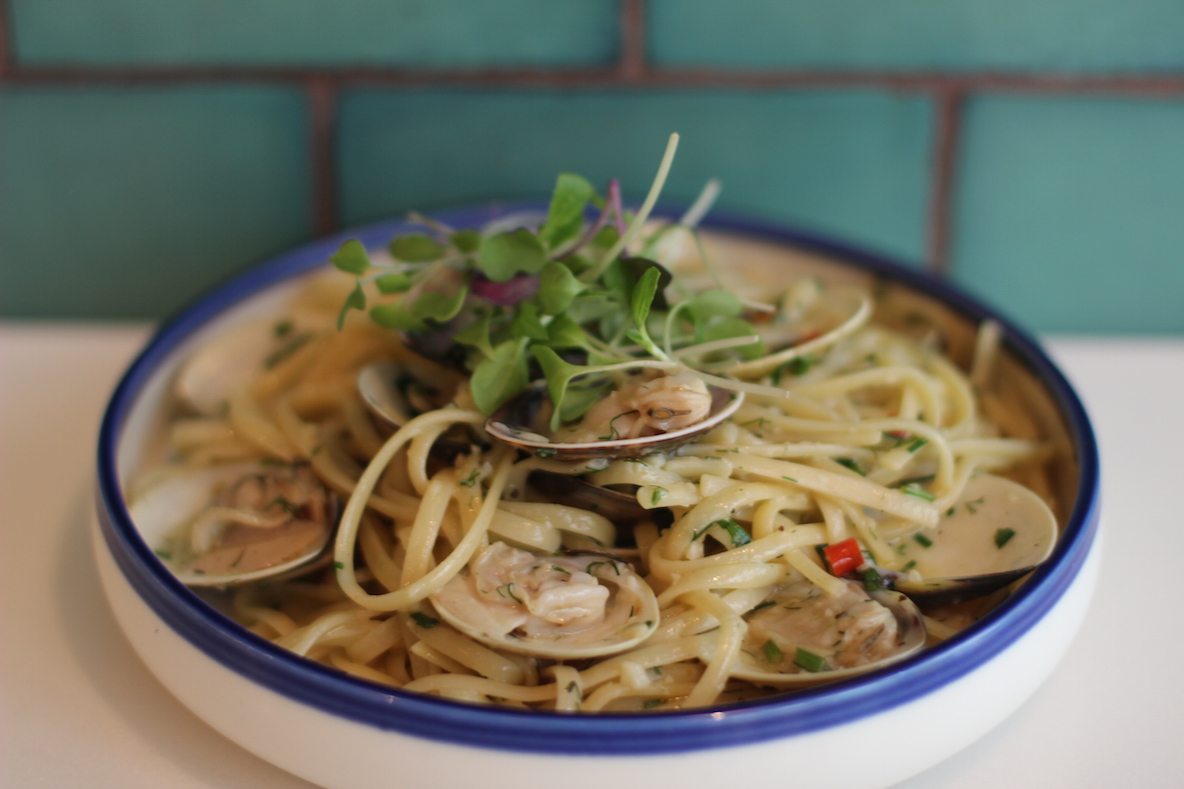 Catch isn't just for pescatarians – both the aromatic jerk chicken thighs ($168) (hard to go wrong there) and the butter-soft rib-eye steak ($298), hidden under a mound of mushrooms, were tasty carnivorous options. 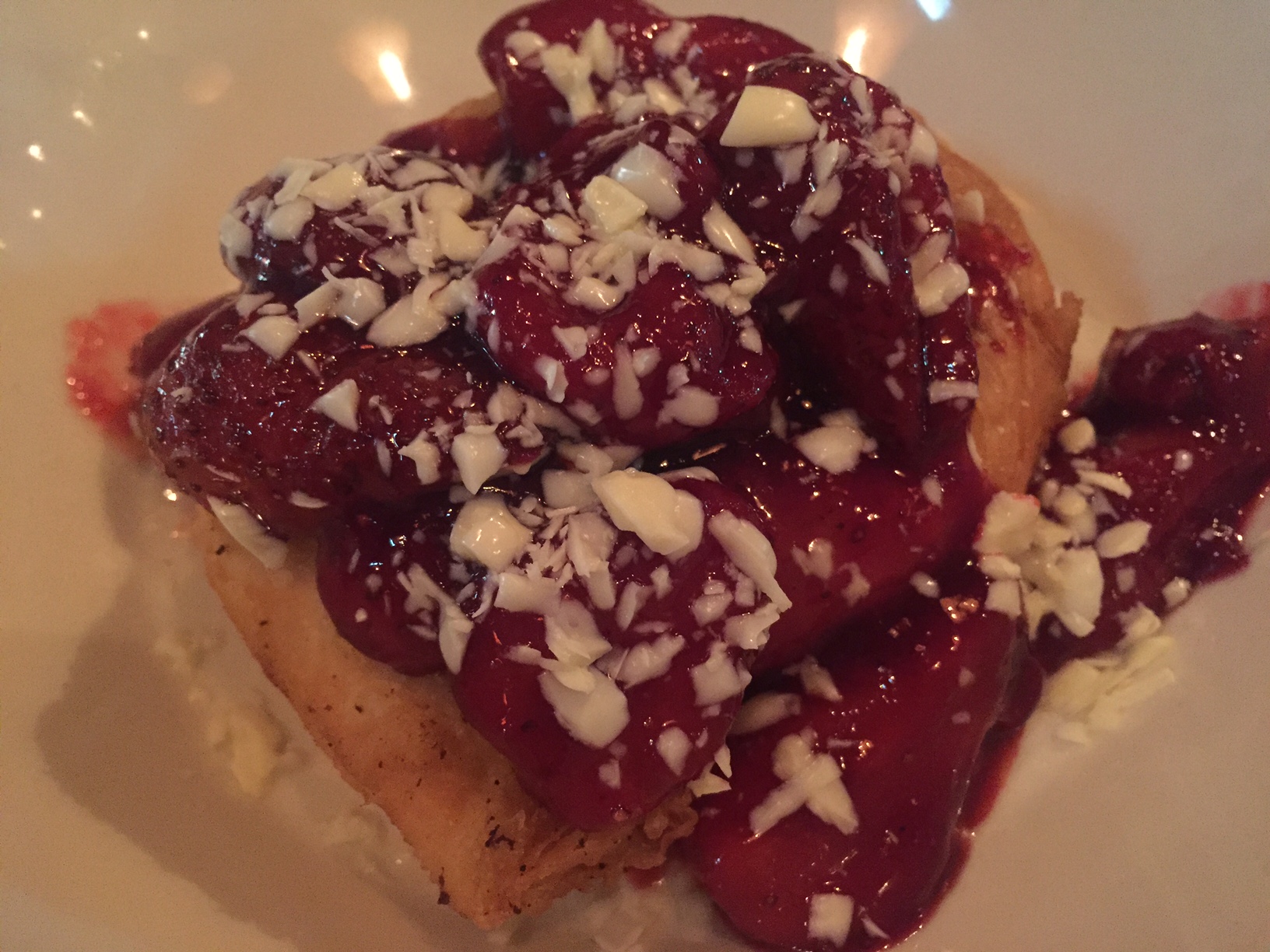 The strawberry cheesecake filo pastry ($68) was light enough to devour after such a feast yet satisfying enough for any sweet tooth, rounding out an exceptional meal.

We'll be back soon to catch another wave of deliciousness at Catch. 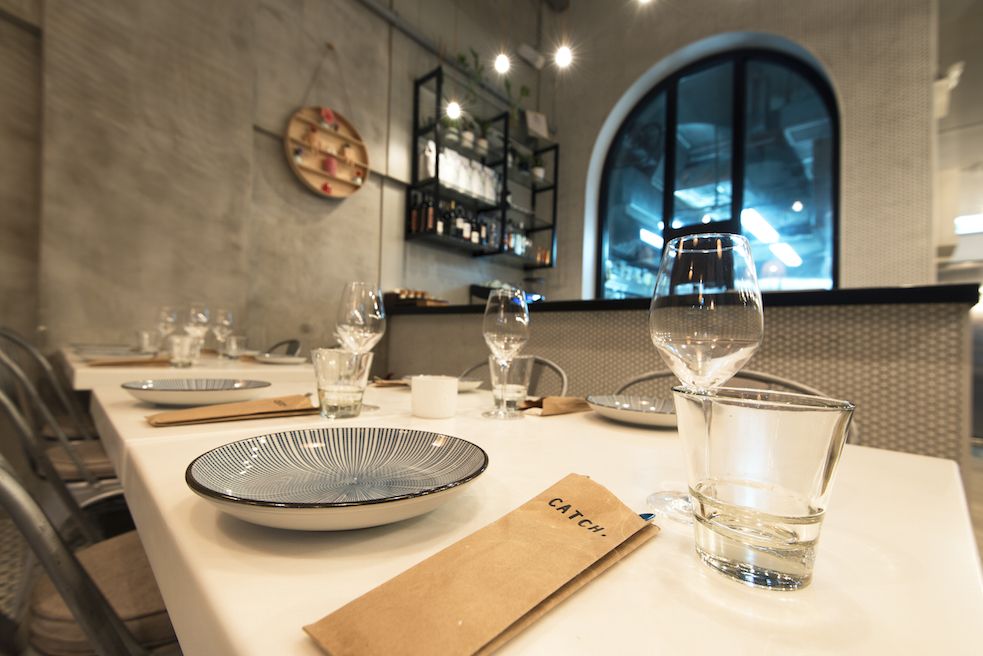 Where to Discover Spanish Lamb in Hong Kong