You may have already fallen for Le Garcon Saigon in the Star Street precinct, with his cool, open-air facade and deeply flavourful grilled meats made from the Vietnamese chef's mama's recipes. Well, now you can sample the goods from this boy's little bro next door, and he's as uncomplicated as they come, serving only one thing, bánh mì thịt, or pork banh mi ($88).

Chef Bao La, of both restaurants, has taken the beloved breakfast of his youth (not a typical breakfast food, but Bao was lucky) and has replicated it into a lunch offering for the hungry Hong Kong masses.

The baguettes were the first thing Chef Bao needed. He went through four bakers before he settled on the one that he worked with to perfect the exact shape and consistency to recreate the authentic banh mi his mama used to make. The result is a crunchy, crusty, torpedo-shaped loaf begging to be stuffed, then stuffed right into your mouth.

We peered at the meticulously laid out ingredients that follow along in an assembly-line order, much like Subway, except there is no choosing here – it all goes in. And that's why we like it. Who needs choice with a line-up like this – just pile it all on. 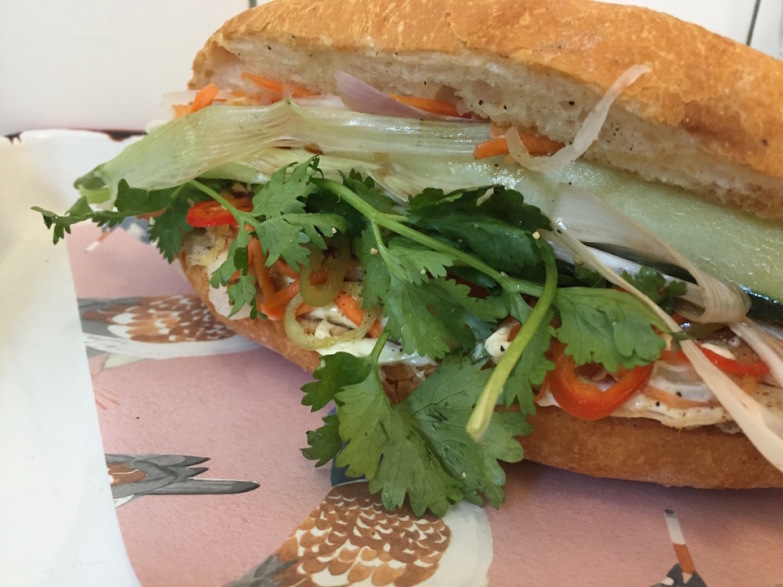 First come the pork belly slices, then the fromage de tête (head cheese), with all the fatty and flavourful bits like tongue and cheek, then the mortadella-like slices of pork tendon and ear to give that sinfully soft mousse-like texture and a hearty dose of pork floss. Next comes a thin spread of chicken liver pâté and homemade mayonnaise before piling on the pickled carrots and daikon, cucumber and coriander, then the pièce de résistance: the chillies, specially sourced from little-known Vietnamese farmland Bình Chánh outside Ho Chi Minh that Chef Bao says have just the right hit of floral and aromatic flavour, with a quick jab of spice that dissipates quickly off the tongue once they've had their fun.

So you've got the crunchy yet soft bite of the baguette, the pork four ways, the sauces and spreads, a touch of acidity, then the herbaceous and spicy hits that all combine for a gorgeous submarine of a sandwich that's been delighting Vietnam since French colonial times and is now in Wanchai to continue its legacy.

They are keeping it small to begin with and only doing 50 sarnies a day to start – so go early (LPS opens at 12pm) if you plan on taking one of these babies home – but they have plans to work up to more and potentially even open for early dinners. Chef Bao also hopes to be able to offer on-the-go Vietnamese iced coffee in returnable bottles, which we are very excited about, despite the willpower it will require to restrict ourselves from daily trips there.

If you eat in the tiny confines of the shop overlooking the geometric tiled floor, you'll have a thoughtful tin tray of a plate on which to catch the mess – because it is very messy – or you'll get a nice, eco-friendly brown bag for eating al desko.