It's the only day of the year where plenty o' pints are in order, but why?

You may wear a spot of green this St. Patrick's Day regardless of whether or not you're Irish, or even know what the day is all about.

We'll do you a solid and get to the bottom of the keg, so you can impress one and all with your knowledge of this most glorious of holidays.

The Saint, the Clover and the colour green

Celebrated internationally from Ireland, the United States, and Australia, even all the way over to Russia, St. Patrick's Day commemorates Ireland's national apostle, St. Patrick. The 17th of March marks the anniversary of his death and is a day that has been observed by the Irish for over a thousand years. Apart from the Irish native clover, or shamrock, being significant on this day (it's believed that St. Patrick used the three leaf clover as a symbol of the Holy Trinity), these are the only bits of fact associated with St. Patrick on this commemorative day.

Green foods, beer and clothing had no association with the occasion and were introduced much later when St. Patrick's Day officially became a celebration of all things Irish. That means shamrocks, leprechauns, gold, and jolly good cheer, not to mention the colour green. After all, Ireland has its "emerald Isle" nickname to live up to, and the legend has it that wearing green makes one invisible to leprechauns who would otherwise pinch you if they saw you; Irish folktales see leprechauns as "cranky souls" who protect their gold with countless trickery schemes while we may see them as cheery little lads with a pot of gold at the end of a rainbow.

Throughout cosmopolitan cities such as Dublin, New York and Montreal, annual parades take place with hundreds of thousands of revellers donning green and clover shaved novelties, rivers being turned green (random fact: Chicago uses over 15kg of green dye to turn its river into a green hue for several hours) and thousands of litres of Irish getting downed.

From a Religious Day to a Feast Day

Traditionally a religious day of celebration revered by Roman Catholics, Irish laws actually forbade the opening of pubs on March 17 all the way up to the 1970s, and it was another several years before it officially became a celebratory day of the Irish culture.

Now a multi-day affair with parades, concerts and millions of participants in the Dublin festival alone, St. Patrick's Day is far from being the religious occasion it once was. No feast day is complete without an actual spread of food, and the most traditional of St. Patrick's Day meals is not actually green, but a serving of Irish bacon and cabbage. In America, though, the bacon is substituted for corned beef, as the initial Irish immigrants had to use cheaper cuts of meat to save money, and it soon became a tradition for Irish Americans.

Accompanying this would be copious amounts of boiled, mashed, fried or baked potatoes - think colcannon, a dish of mashed potatoes with kale (before kale was too cool); coddle, which sees layers of pork sausage and bacon mingling with more potatoes and onions and boxty, an Irish potato pancake. There is also the iconic Irish soda bread, made with a pinch of bicarbonate of soda for leavening and marked traditionally with an "X" on the top to help to ward off evil spirits.

There there's the beer. Oh the plethora of beer! St. Patrick's Day is normally the one day during the Lenten season when restrictions on eating certain food items and drinking alcohol are lifted. Around 13 million pints of Guinness and well over 1% of the world's beer are consumed on the day, according to IBISWorld.com, which is no easy feat. Whether it's ale, lager, stout or porter, all beer is welcome on this day.

Where will we be going?

There is no shortage of beer establishments to choose from, but the biggest event specifically for St. Patrick's day (even endorsed by the St Patricks Society of HK) is the Irish Village being setup at Cyberport tomorrow at 6pm.

Yes we know... it's in Cyberport... but its outdoors, spacious, and relatively peaceful. See you there! 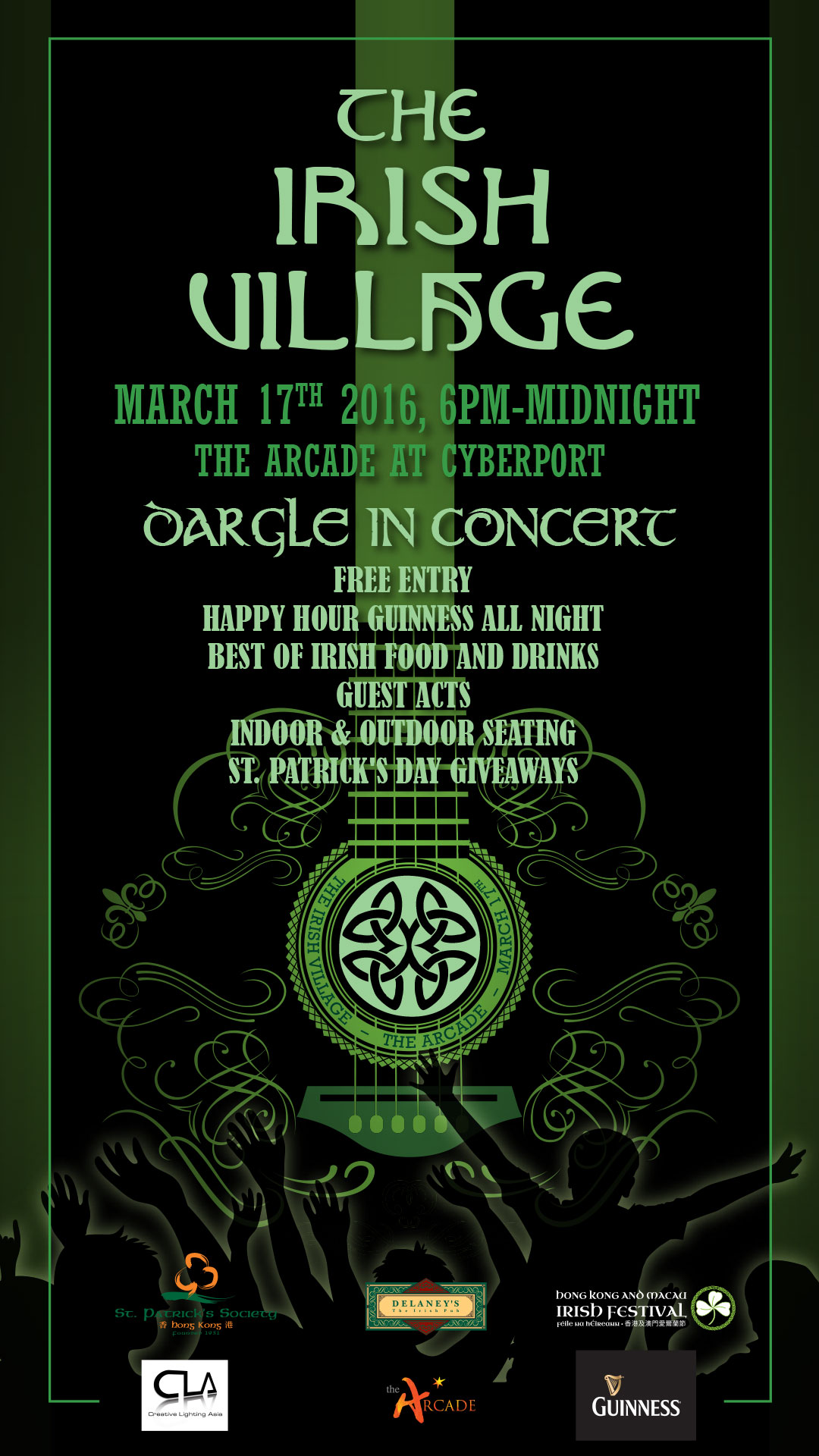