The Magician’s Maytag Blue burger from Burger Circus is a magical burger of decent abilities. 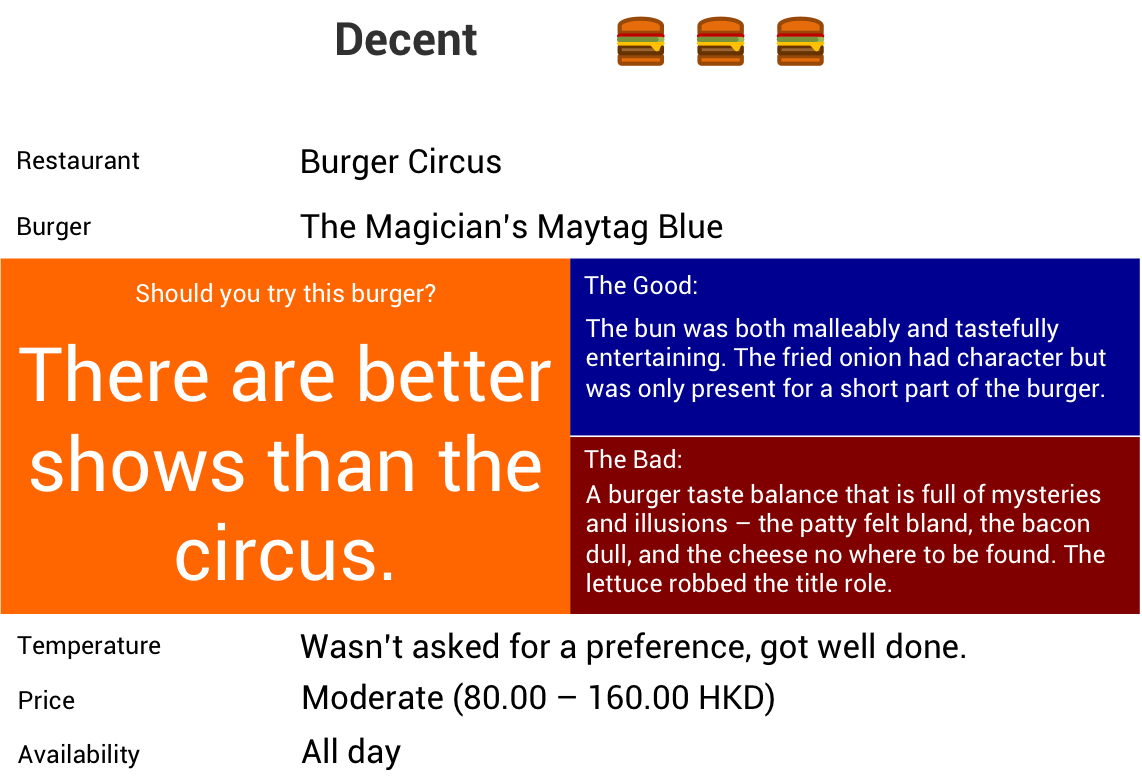 The big top has been raised and the stage set – a burger construction with everything in place, where not all is as it seems… As the curtains rise and the show in one’s mouth commences, a hamburger, full of mysteries and illusions, will have a couple of audience members in awed wonderment as to the perplexities of the ingredients that spectacle a presentable burger taste balance and a burger construction of unfulfilled proportions.

The burger’s showhamburgership, perfectly scened in its box, appears to be as sincere as they come, yet something about it feels slightly dolorous… something about its stacked presentation, as one is soon to discover, seems a little out of character – and as the show plays on, the burger’s lead characters are restrained by those of supporting roles. A green hyperbole of lettuce and tomato is introduced in this hamburger; the lettuce in particular, with its too many layers of leaves, robs the title role – bites are lush with crispy fresh tomatoey greenery that overpower the ring leaving the meats as fill-ins.

The beef patty, standing in as the magician’s assistant, has an enticing brown roundness and a textured character that crumbles in an agreeable juicy manner, its tragic illusion is portrayed by a beefy blandness and an unimposing stature that has difficulty staging itself with the other characters in the panoply. The bacon has a more ominous feel in the burger, the single slice has a hard crisp presence that behests attention, but lacks confidence in its taste.

The burger magic between the two pieces of bread, buns that execute their part with a winning malleability and taste that manages to capture the essence of the burger show, continues with the vanished cheese. A distinguished performer such as blue cheese, with an interesting stage name, should hail excitement; as one anxiously waits for its savory appearance, in the end, this credited role was left utterly unfulfilled. The fried onions make a charismatic but lowly appearance throughout most of the burger. The fries are pretty standard.

The cost for the burger experience at the circus comes to 88.00 HKD plus an additional 30.00 HKD for the fries, it all seems a bit steep for the burger one gets. During the finale, as one reflects on the closing act of this decent burger, it’s hard not to think about other burgers one might be missing because the circus is in town.