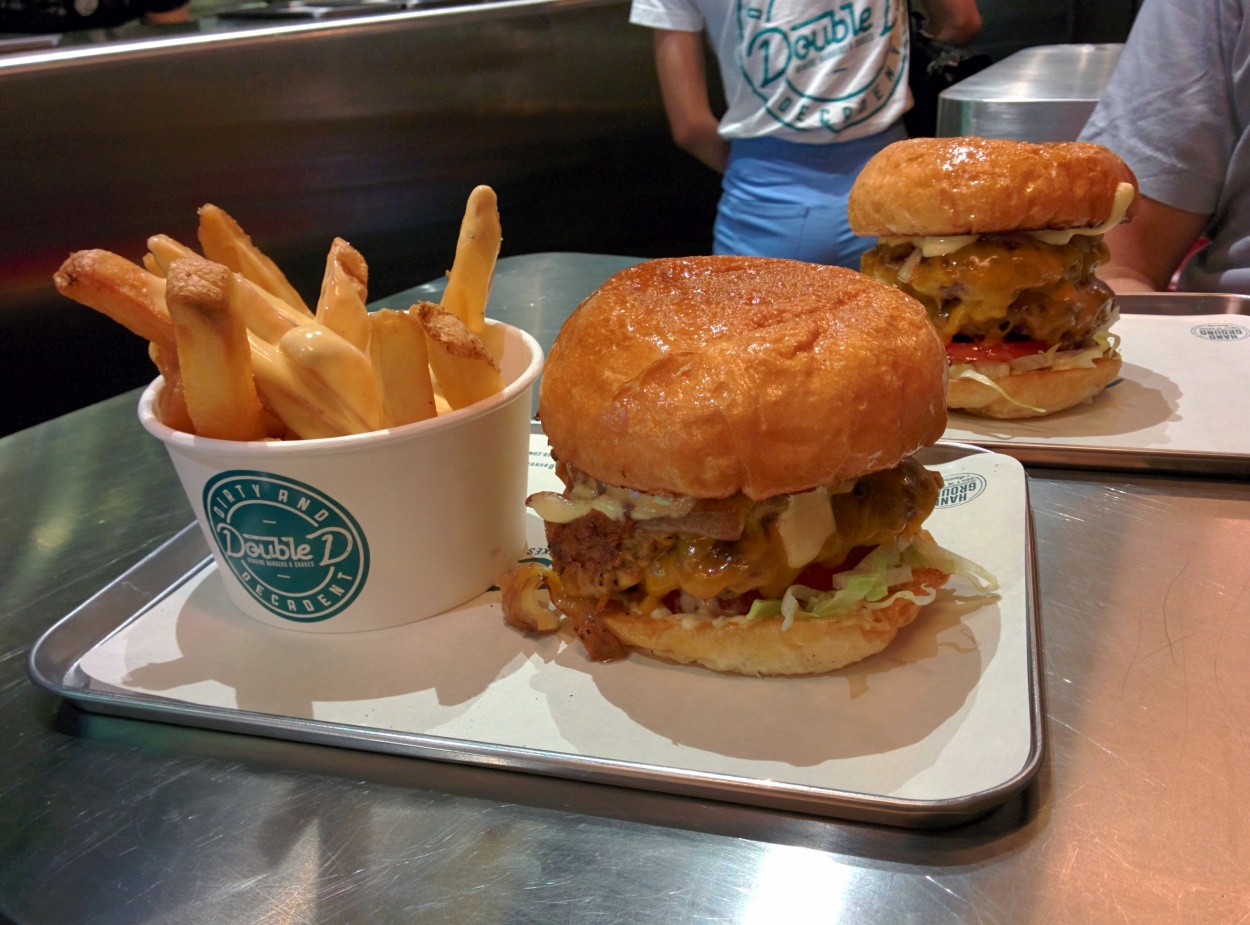 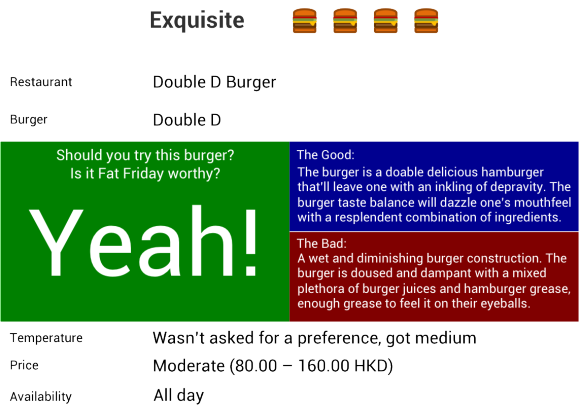 This is a burger that’ll do the deed, a double delicious hamburger that’ll leave one with an inkling of depravity. A feeling that dawns with alluring eyes befalling onto a burger that is gleaming with shine, that carries on with the first dabble between tongue and burger engulfing taste and body in an doused and dampant, slightly wet and exciting, mixture of burger juices and hamburger grease; an intimacy that promptly fulfills any one’s burger aspirations with a rousing burger taste balance characterized by a doable delectability.

The burger’s burger construction, seemingly well stacked, and at first firm between one’s fervid touch, is plagued with salacious amounts of perspiration and fat – savoury loads of sauce and oils are felt by laying eyes, as one might almost experience grease coming out of one’s eyeballs; by gentle hands that won’t want to let go despite the subsequent lustrous slippery build; by frivolous taste buds, that persist for that desired burger taste balance that relieves a dashing mix of a racy ardent ingredients. It takes one bite, a first enormous nibble around the two patties and buns, to get instant bur-gratification as all the ingredients come to dazzle one’s mouthfeel with a resplendent combination of themselves.

The two patties, which might seem as an overload on the outset – they aren’t, have a grabbing texture that tear into lively meat bites that add to the already debonair beef palatableness with its inviting salted seasoning. The rest of the ingredients form a titillatingly basic burger; the cheese grapples the burger with a crude mild gooeyness and a wrapping flavour; the cooked onion has an entertaining tickle that is both silky and zestfully sweet, and the chopped lettuce and slice of tomato – covered in a myriad of juices, lose their green innocence. The buns, lustrously covered with an lewd dipping layer of butter, project a soft darling firmness that dwindles as they become smeared in the burger’s nectar – the comparative ratio between buns and meat works well… It’s the sultriness that slowly diminishes the burger’s texture and build. The fries are good and quite dense.

For 120.00 HKD one should nestle the Double D, give this burger a good tumble; and for 12.00 HKD one should get the bacon, if only to add to the plethora of oily extracts. Double D Burger is a good place to have a gratifyingly guilty double d burger experience, even if not everything in the shop is Double D…

Original article has been featured on: Burgers HK Website