Eat your way through Thailand in two hours

Many of us love vacationing in Thailand. Their postcard beaches, warm hospitality and infamous massages play an all-important role in Thai holidays. But, above all else, it’s the food that shines for us. Thai cuisine is not only known for its heat but also for its amazing ability to balance five different flavours in one dish: sour, sweet, salty, bitter and spicy.

When Ayuthaiya offered to lead us on a gastronomic tour of Thailand one afternoon, I couldn’t afternoon resist a quick holiday. Ayuthaiya’s chef, Pairote Pimswat, has designed an eight-dish Tuk Tuk menu with a mixture of fresh salads and rustic mains to showcase the best delicacies found in his favourite Thai regions. In line with Thailand’s etiquette of eating as a community, he created the menu with the intention of sharing.

This chic bistro can be spotted almost immediately after you exit the escalators on Hollywood Road, along with its illuminated motifs of Wat Pho temple on the walls. My husband and I always love to watch the world go by as we eat, so we opted for an al fresco table. 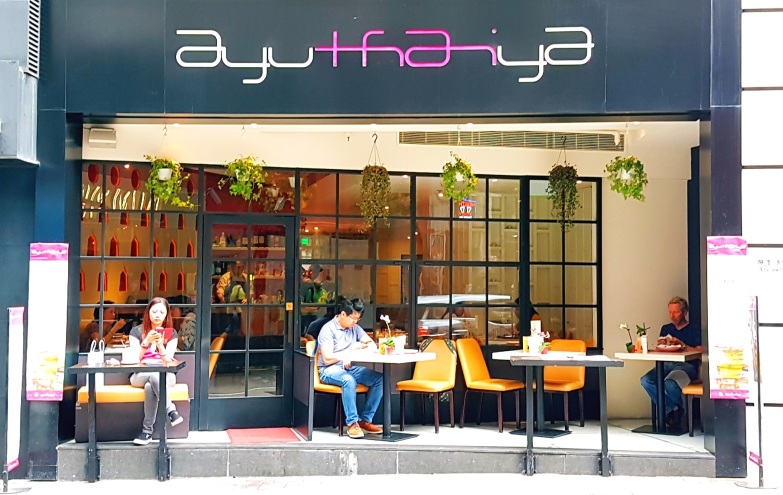 The Food and Drink

We began our lunch with a couple of refreshing mocktails. Som Saa ($75) contained all the bright fruits – passion fruit, pineapple, orange, lemon – and opened up our palates with its zesty flavours.

Blushing Trilogy ($75), on the other hand, was concocted with three different types of berries – strawberry, raspberry and blueberry – mixed with apple and Yakult. It was light, more sweet than sour, but was packed with so much punch and fruit bits that it could also double up as a breakfast shake. 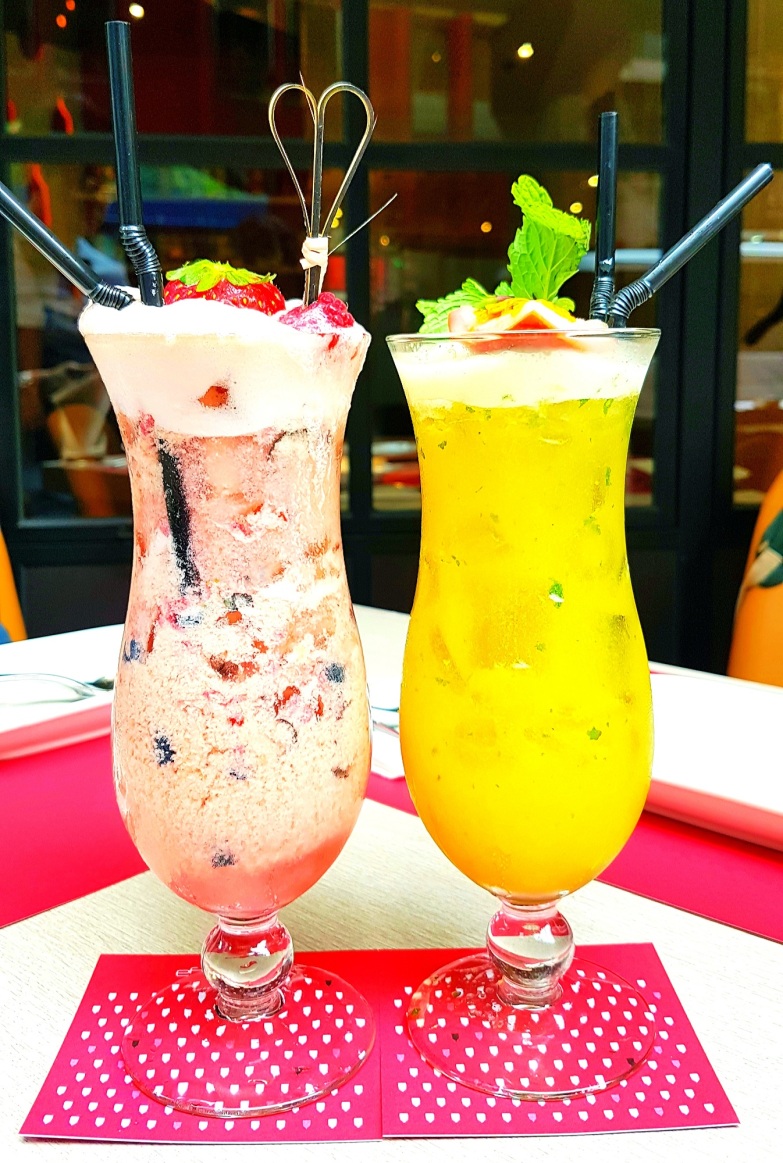 We began our meal tour of Thailand with the country’s capital that defines bustle, Bangkok, and were treated to yum tua poo ($118), a winged bean salad. The greens also included shredded chicken bits and a couple of king prawns, tossed with fragrant coconut milk, savoury roasted chilli paste and gorgeously roasted peanuts.

I loved the play of tastes and textures in this pretty blue dish. There was the crunch from the beans, the nuttiness of the peanuts, the zing from the dressing and shallots and the mild heat of the chilli, a spice Chef Pimswat can’t do without. Every spoon tasted delectable, with each motion almost unstoppable. At the end of this course, I noted that my senses were sharply heightened and I was eager to explore the next regional dish. 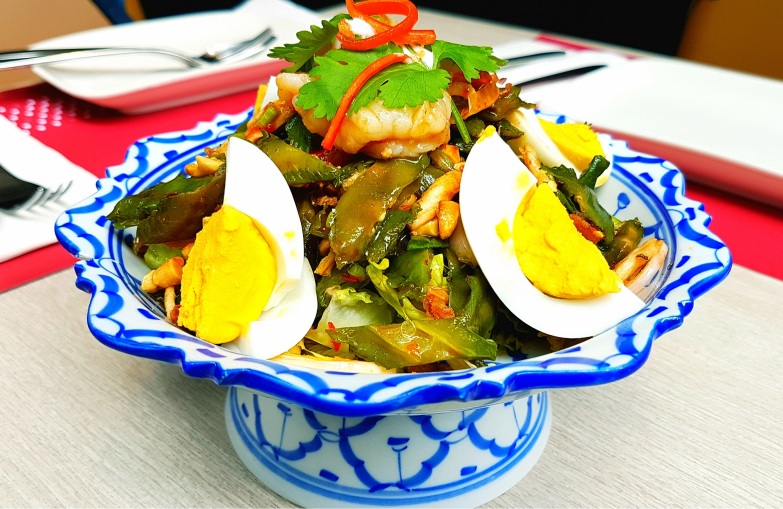 Next, Chef brought us a bit south-east to Chanthaburi and treated us to another starter, yum nuer ($138), a grilled New Zealand strip-loin beef salad. Though the region is known for its seafood, the sliced meat was beautifully seasoned and cooked perfectly to medium rare.

There was also a very tangy palm sugar, lemon and fish sauce dressing on the side. It was surprisingly overwhelming, and it intensified the flavour of the beef, which was already delicious on its own. The mint leaves, celery, cucumber and cherry tomatoes provided a nice cooling balance to the tartness of the sauce, along with a good mouthful of crunch. 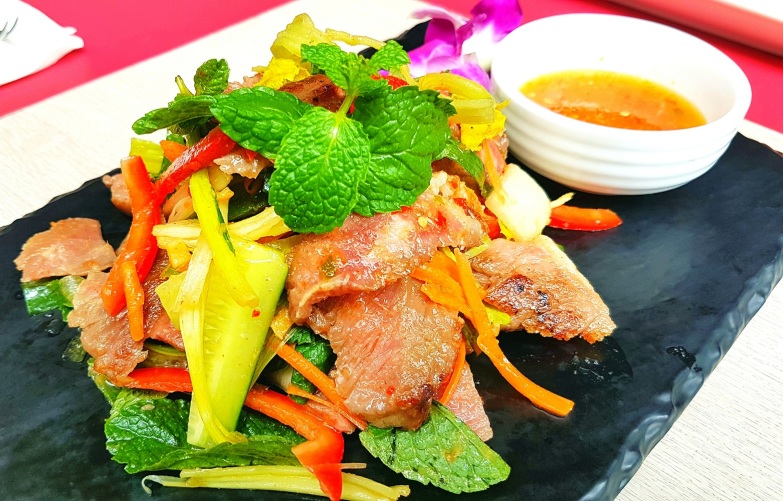 We travelled up north to the furthest region, renowned for its Lanna food, or dishes of ancient Thailand. For this course, we were served kai yang ($118), or grilled chicken skewers marinated in lemongrass and Thai spices. The chicken was well seasoned but a tad too dry.

Fortunately, the skewers were served with a side of papaya salad with tomatoes, lime leaves and chilli. We draped some papaya shreds across our chicken pieces and drizzled some of the dressing on top – much better. 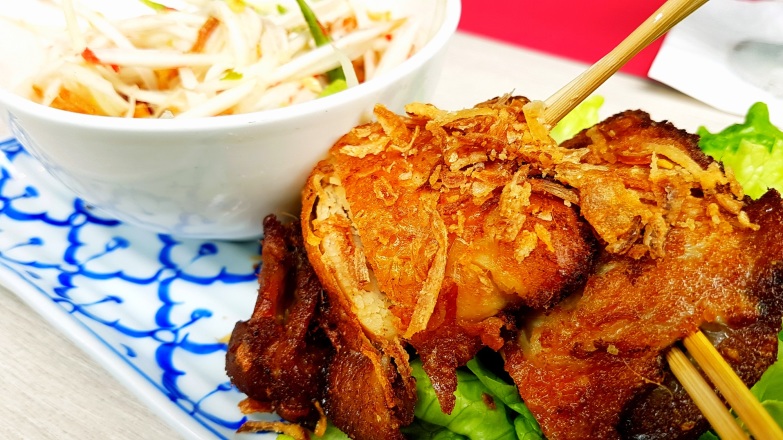 We then went east to Nakhon Phanom, home to fiery Isaan cuisine. Because this region is near Laos, it’s also well known for its Indo-Chinese fusion dishes. In this course of our tuk-tuk journey, we were treated to pla pao ($178). This was a whole salt-baked tilapia that looked beautifully scorched. It was such a visual feast that onlookers stopped to peek at the dish.

Chef Pimswat believes in the traditional Asian method of spice-pounding, and we could see the coating of fragrant charred lemongrass and coriander on the fish. It was so well perfumed that we could also taste the lemongrass on the tilapia flakes as we peeled them off the bones. This dish was both rustic and aromatic, and the spicy tamarind dressing accentuated the flavours of the fish. Two big thumbs up! 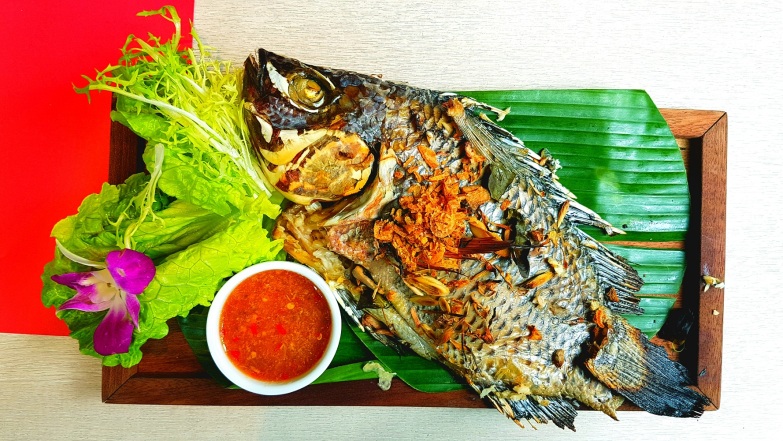 We ended our meal with a Thai classic, khao niew mamuang ($118), mango with sweet sticky rice. The mango tasted like honey and was so heavenly ripe that eating it the next day would have been a sin (and too late). This dessert was served with two scoops of sticky rice, one white and one red, both covered generously in a delightfully sweet coconut gravy. It was a beautiful end to a beautiful tour. 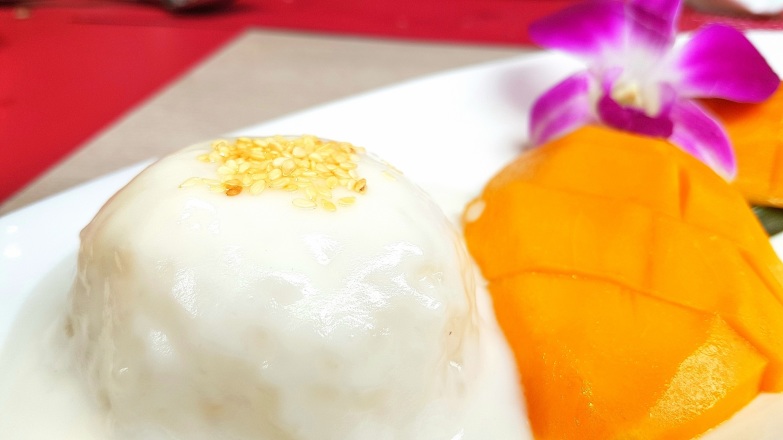 Our lunch showcased some colourful, piquant highlights of Thai cuisine, and the taste of Southeast Asia was evident in each dish. The new mainstay Tuk Tuk menu is not only affordable, it’s also perfect for sharing as a couple or a small family. Ayuthaiya’s spice level is great, so if you’re craving something fiery, be sure to inform the staff not to hold back on the heat.

Jenni Lien | about 2 months ago