My childhood memories are filled with yum cha weekends, a treat from my late grandparents and a ritual to which I always looked forward. I would opt to sit at the aisle and watch the servers wheel by steaming carts of tantalising snacks. First to exit the kitchen would be the “fried” pushcarts with spring rolls, potstickers and fried dumplings. I always anticipated the “steamed” carts to follow, stacked tall with baskets of har gow (prawn dumplings), siu mai (pork and prawn dumplings) and black bean pork ribs. But what I really loved were the ”sweets” trolleys, which were decked with egg tarts, Malay cakes, sesame balls and mango pudding. Our table would always be filled with noisy chatter and laughter, and we would also play our own version of “dim sum roulette” on the lazy Susan.

When I received my very first pay cheque, I treated my grandparents to a dim sum feast. By then, the carts had disappeared and the orders were delivered directly from the kitchen. All of us were now much older and notably more mellow, but our table was still nothing short of warmth and love.

I tried to relive the experience with my husband one Sunday afternoon at Zen. Though there wasn’t any sign of a traditional pushcart, I was still looking forward to savouring favourites that reminded me of the afternoons I used to spend with Grandma and Grandpa. 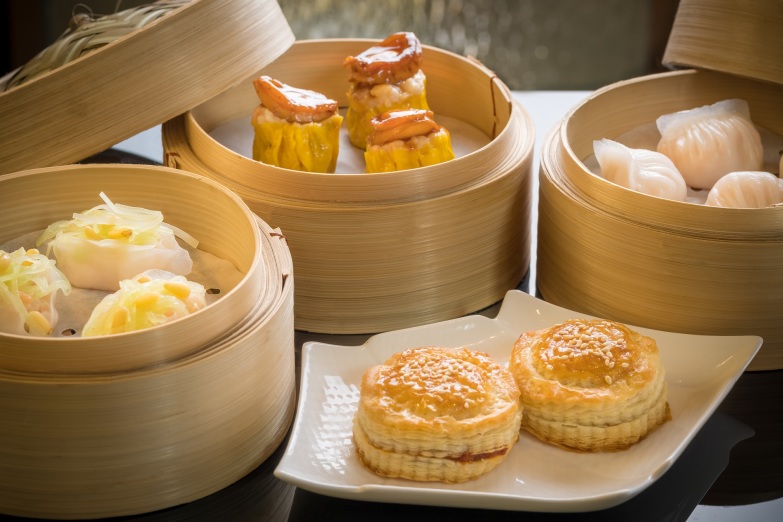 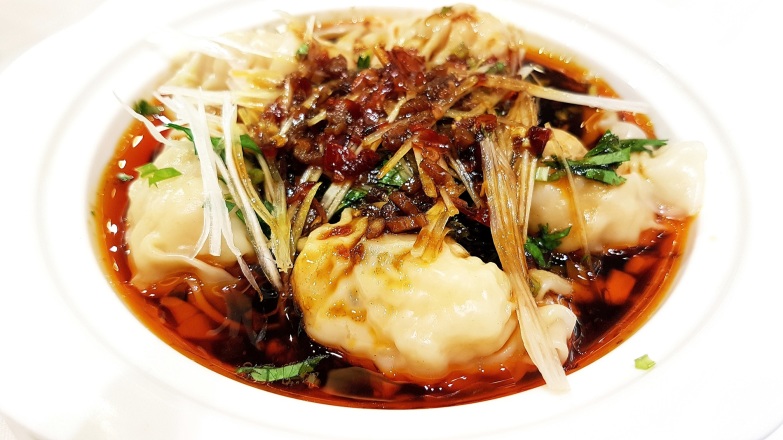 The prawn and pork dumplings in hot chilli sauce 川味紅油抄手 ($55) were first to be served. The dumplings were fat, stuffed with generous portions of fresh meat and prawns. The chilli oil had a devilishly red hue, but surprisingly, the spice level was rather mild. The dumplings tasted both sweet and savoury, and much lighter than the ones commonly found in Sichuan, which makes them great for those who want to sample this dish without feeling the heat. 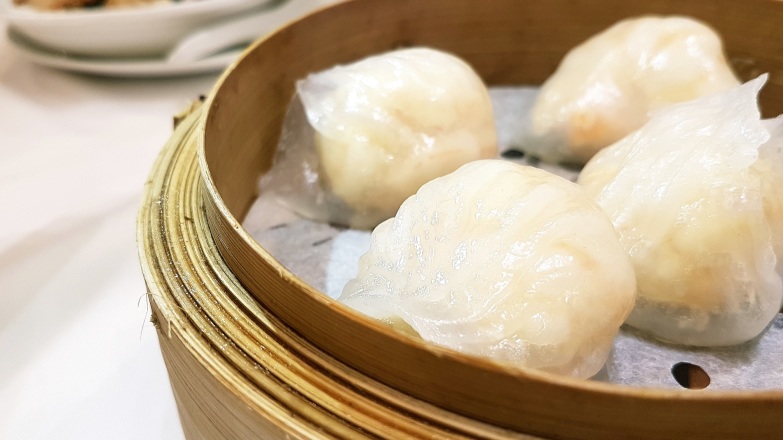 Prawn dumplings 釆蝶蝦餃皇 ($55) are essential to my dim sum meals because they were loved by Grandma. Also known as har gow, these are little bonnets of shrimp wrapped in rice paper. I picked one up and, almost immediately, the rice paper skin tore apart, sending the prawn filling tumbling back into the steamer basket. Oh dear. The prawns were fresh and delicate, but the crystal skin, which I ate separately, was unfortunately a little too soggy, which explains why it didn’t hold the filling well. 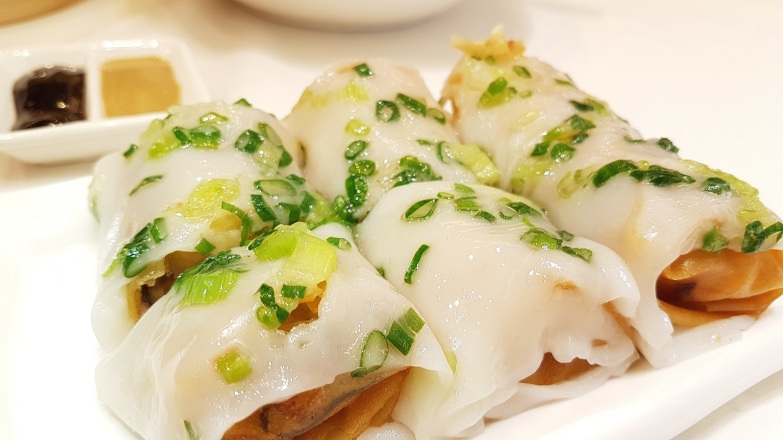 Crispy shrimp cheung fun stuffed with mixed vegetables 春風得意腸粉 ($55) was served next. These were deep-fried spring roll skins stuffed with assorted fillings and wrapped in steamed rice paper rolls. Though the menu stated they contained a “mixed vegetable” stuffing, they were filled with meat and prawns, so generous so that there was never a hollow bite.

These rolls were served with two sauces: Peking duck and peanut. The peanut sauce was like a slightly watered-down version of peanut butter that left a bitter aftertaste. But I loved how the chef played with flavours with the tang of the duck sauce. I glazed a piece with the sweet sauce and the crunchy spring roll was almost similar to enjoying a piece of crispy roasted Peking duck skin. It tasted absolutely divine and I continued to slather my remaining pieces in the duck sauce. 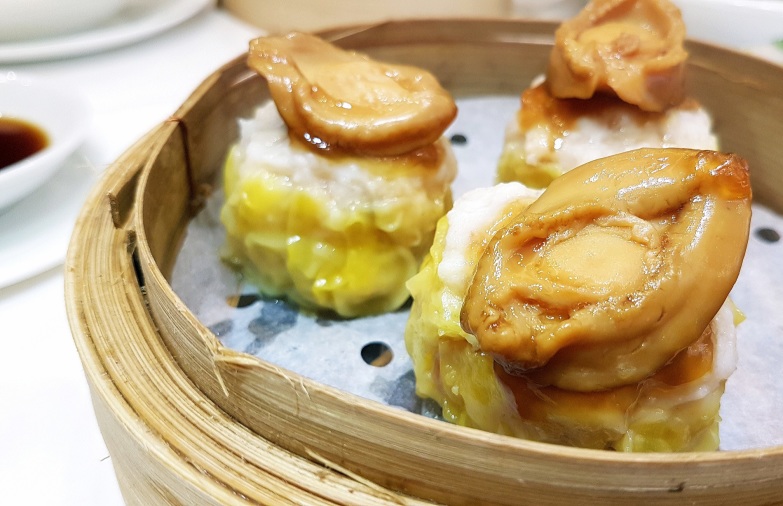 The siu mai with whole baby abalone 鮑魚燒賣王 ($63) was slightly different from the siu mai most of us are accustomed to eating. Instead of topping the dumplings with crab roe or mushroom, Zen incorporated a golden baby abalone atop each. The abalone had a deep seafood aroma, a stark contrast to the pork, which has a lighter fragrance. The pork was cooked to a slight pink and the dumplings had a distinct flavour from the juices of the meat. It was exquisite surf ‘n‘ turf in one bite. 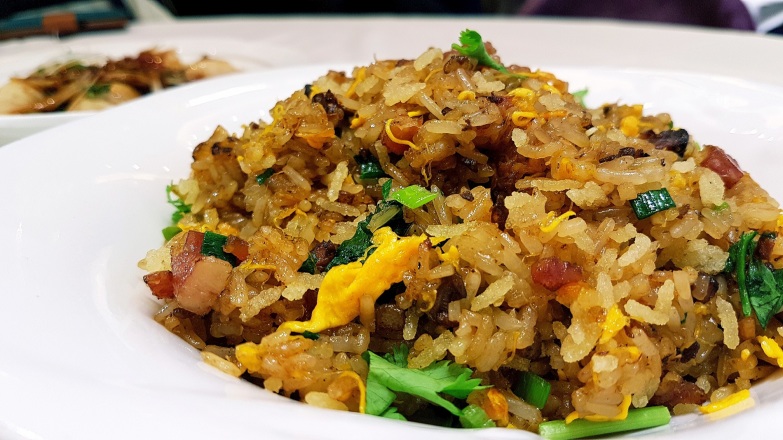 Most glutinous rice I’m familiar with at dim sum teahouses is usually steamed and wrapped in lotus leaves. Zen’s glutinous rice with mushroom, Chinese sausage and dried shrimp 生炒臘味糯米饭 ($168) came fried, not wrapped, but it tasted just as great. This is one of the dishes that requires more preparation time, as the grains need to be soaked for hours before frying. The chefs were generous with the mushroom, sausage and shrimp, and they even incorporated crispy rice into the mix (the crunchy kind found at the bottom of a clay-pot rice dish) to give additional texture. Yum! 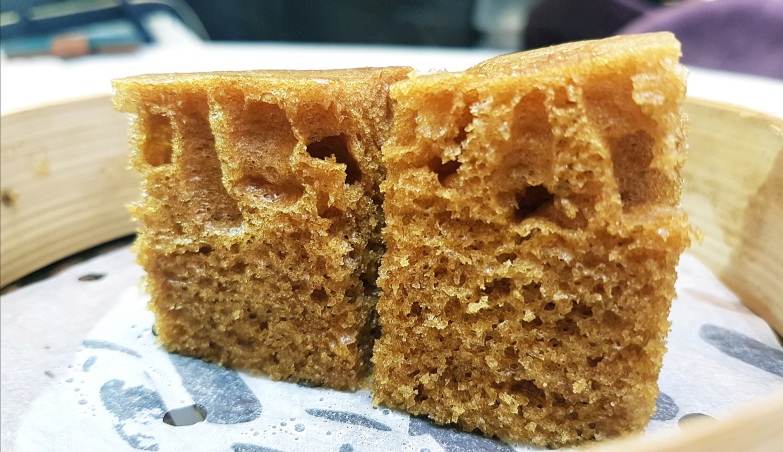 Steamed sponge cake 古法馬來糕 ($35) literally translates to “old-school Malay cake”. Word has it that when the Brits colonised Malaysia (then Malaya), they brought their afternoon tea cakes with them. The Malays then improvised these cakes, replacing cow’s milk with coconut milk, steamed them instead of baking and added pandan leaves. Cantonese chefs then took them to Hong Kong, removed the pandan leaves and the Malay cake has since remained a mainstay favourite at dim sum restaurants – and a must-have for me each time I yum cha.

I lifted a section of the cake and was pleased that it was able to cleanly separate itself from the waxed paper underneath – so far, so good. I tore off a small piece and took a bite. The texture was fluffy and the brown sugar flavour continued to linger in my mouth for awhile. I’ve had great Malay cakes elsewhere, but this one definitely takes the cake. 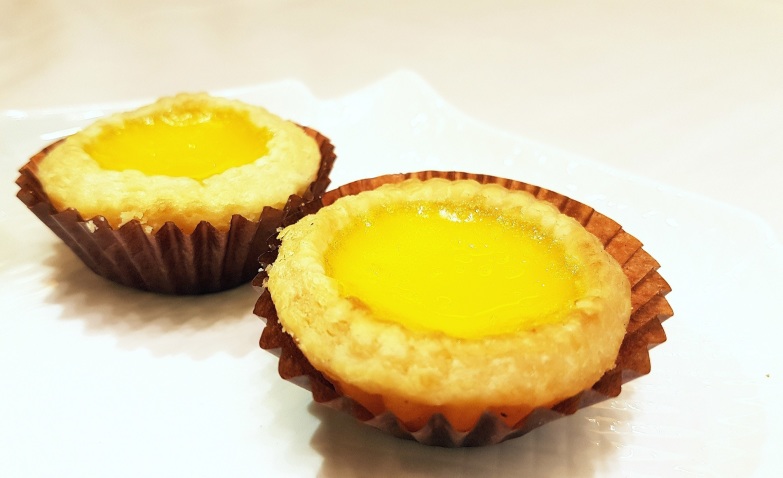 We ended our meal with a portion of swallow’s nest mini egg tarts 燕窩蛋撻子($35), which came as bite-sized tartlets. Egg tarts were one of Grandpa’s favourites, and he would have at least two at each sitting. But these tartlets included dissolved bird’s nest – a highly sought-after delicacy that is dangerous to harvest and laborious to prepare. I held up a tart and took a whiff of the strong, buttery aroma of the pastry before taking a bite. The shell was rich and flaky and the custard was smooth. I could almost see Grandpa beaming with bits of pastry crumbs around his mouth.

It was a bittersweet but beautiful ending to a stellar dim sum experience.

This dim sum at Zen is anything but dim. Though the skin of the prawn dumplings was a disappointment, the fillings for each dish were fresh and generous. Kudos to the chefs for the crispy shrimp cheung fun in particular, which I found especially creative. There is limited seating, so reservations are highly recommended before visiting Zen.