How to Steam Hairy Crab

These furry crustaceans may look intimidating, but they are a snap to prepare!

It's Crab Season!  Autumn marks the season for several of my favourite foods - persimmon, pomegranate and....hairy crabs!  We are now smack in the middle of hairy crab season.  Famed for their irresistible umami roe (and hairy little claws), hairy crabs are a prized commodity amongst Chinese foodies, and are quickly winning over foreign palates.  The original hairy crab stock hails from the famed Yangcheng Lake, a body of freshwater northeast of the city of Suzhou, in Jiangsu Province.  Legend has it that at one point, these hairy critters were considered pests by local farmers, and one such farmer tried to destroy them by pouring boiling water over the advancing crabs.  The result - well, a delicious aroma that converted crab haters to crab lovers!

Today, this highly revered delicacy headlines most Shanghainese cuisine menus during the autumn months.  The hairy crab season officially begins in September, although the female crabs pack the most roe in the month of October.  Come November, it's the males time to shine, with their shells brimming full of oily, glowing yellow roe.  The season officially ends in December, so this delicacy is truly a "limited time offer".  I, personally, prefer the males over the females, since the roe of the male crabs have an extremely creamy consistency while the female roe congeal and harden with heat.  The sex of the crabs are easily distinguishable - just flip them over and look at the bottom flap of their shells.  The females have a round-shaped back while the males have a sharp triangular one.

I was recently gifted with a couple of these delicious critters by a friend who has an investment in a crab farm near the famed Yangcheng Lake.  They arrived by air parcel still tightly bound, and feistily blowing bubbles.  Important note:  crabs must all be VERY MUCH ALIVE at the point you cook them, as dead crabs will build up dangerous bacteria and toxins in their bodies.

The crabs (below) measure above 6 taels, which are considered the optimum size for hairy crabs.  Any smaller, and you don't get enough roe or meat, and any bigger, you don't get as much flavour.

First of all - give these little critters a good scrubbing!  They come from muddy lakes, and are notorious little bottom feeders, so make sure to pre-soak them in cold water for 30 minutes, so they blow out some of the mud inside their bodies, and then give them a good scrubbing with a toothbrush.  This helps wash away any sediment. 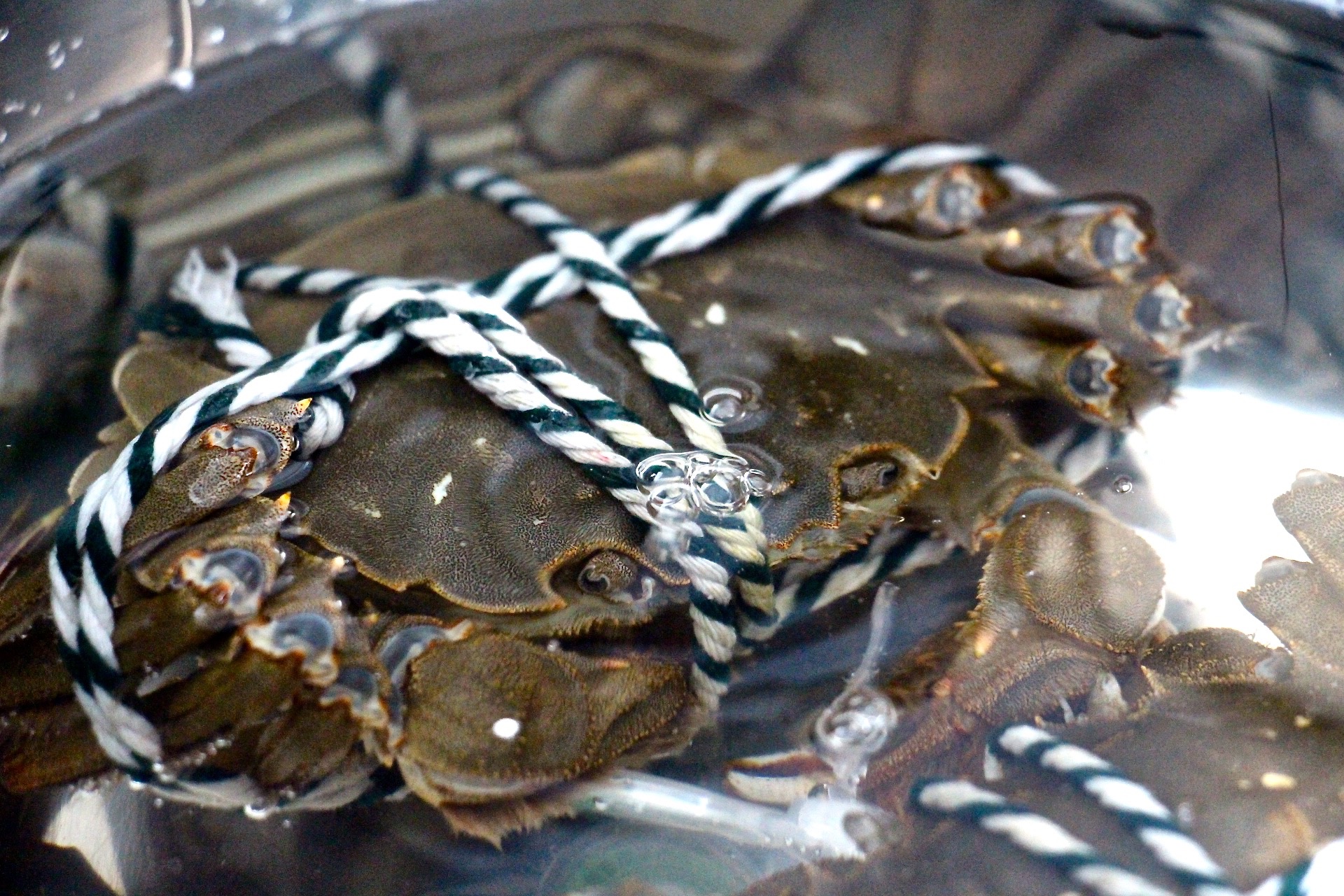 In Chinese medicine, crabs are considered extremely "cold" foods, so they must be balanced with "warm" foods such as ginger, yellow wine and perilla leaves to achieve harmony within the body.

Slice up the ginger and seep in the Zhejiang black vinegar to make the dipping sauce.  Cut extra slices to place under the crabs during steaming. 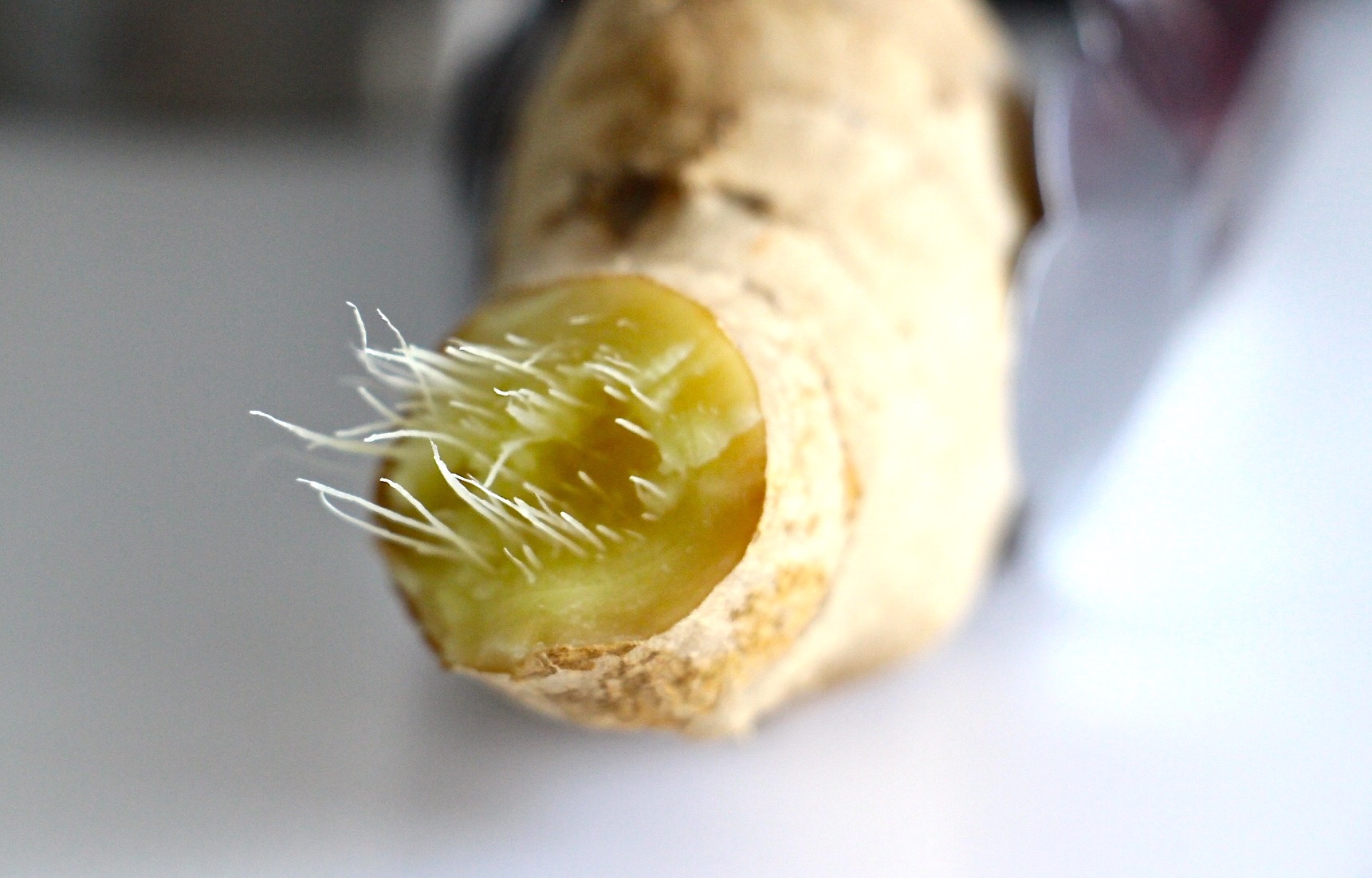 Bring a pot of water to the boil, then fit the steamer snuggly onto the steaming pot.

Layer the perilla leaves and ginger slices at the bottom of the steamer, then place the still alive crabs on top, belly-side up.  Make sure the crabs remain bound, or else you might get a few escape artists!  It's very important to place the crabs belly-side up, as otherwise you might lose some valuable roe as they dribble out during the steaming process!  Put the lid on and be patient.

Steaming time depends on the size of the crabs.  For 3-4 taels, it'll take 15 minutes, while the larger 5-6 taels will take 20 minutes.  Watch for doneness when the crabs transform into a persimmon orange shade. 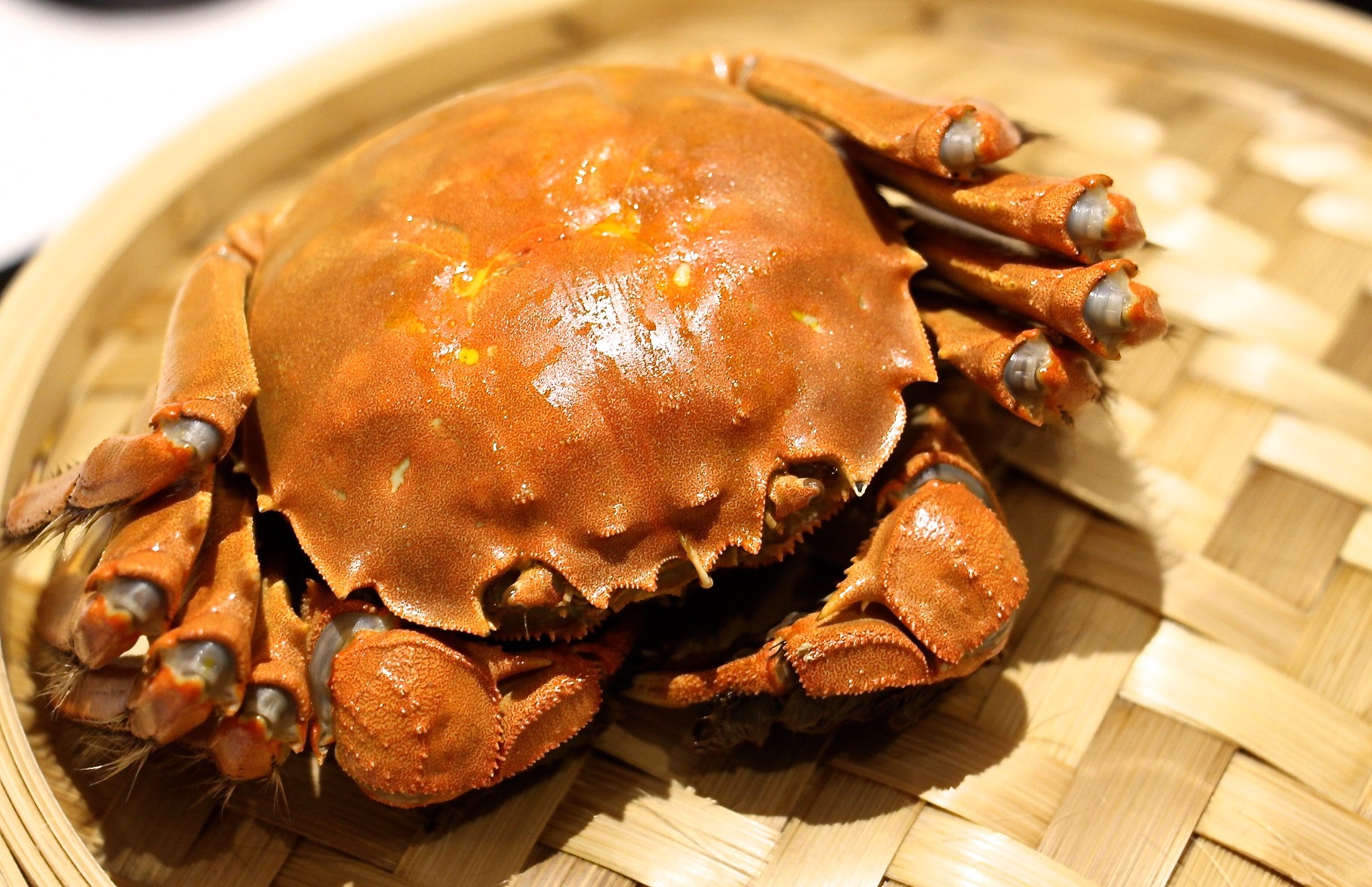 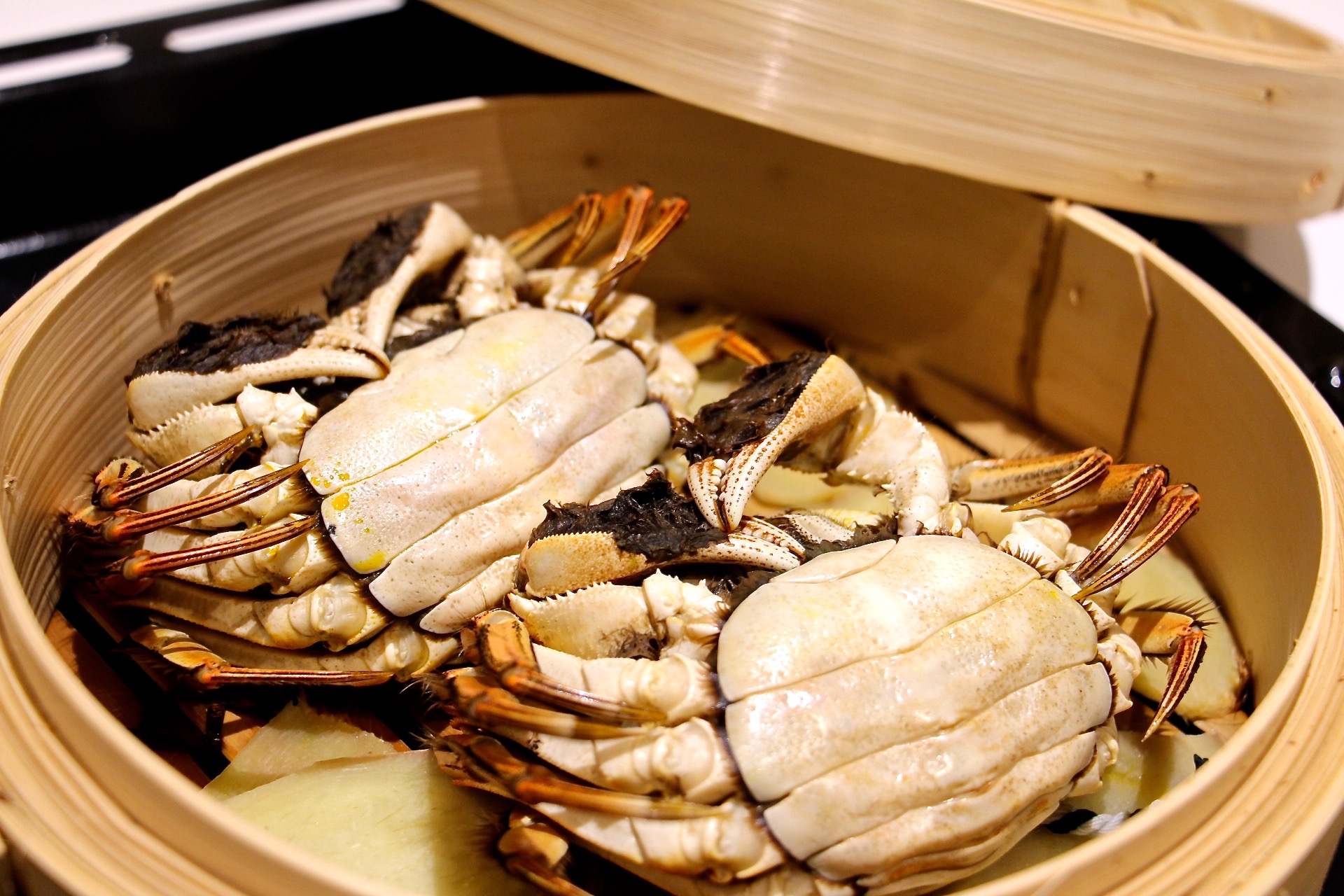 Now, the tricky part is in how to eat these critters!  First, flip the crab over and lift up the belly flap (see below). 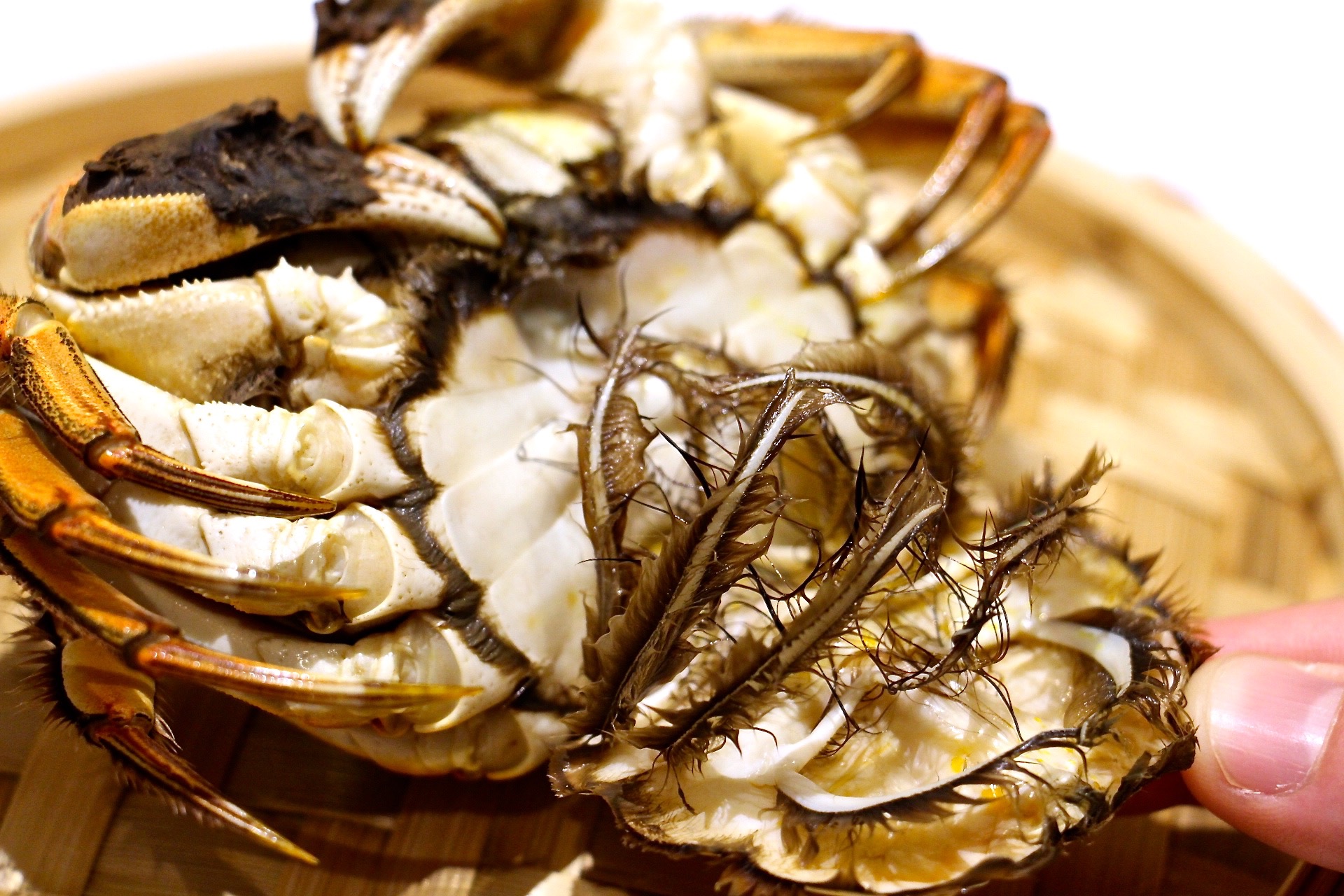 Pull this flap off, and then you'll see a crack where the flap used to be.  Crack this open to separate the shell from the body.  Now, you've hit the gold mine - literally!  Well, a gold mine of golden roe!!!

(Below) The crab's body separated from the top shell.   Eat all the yellow stuff! 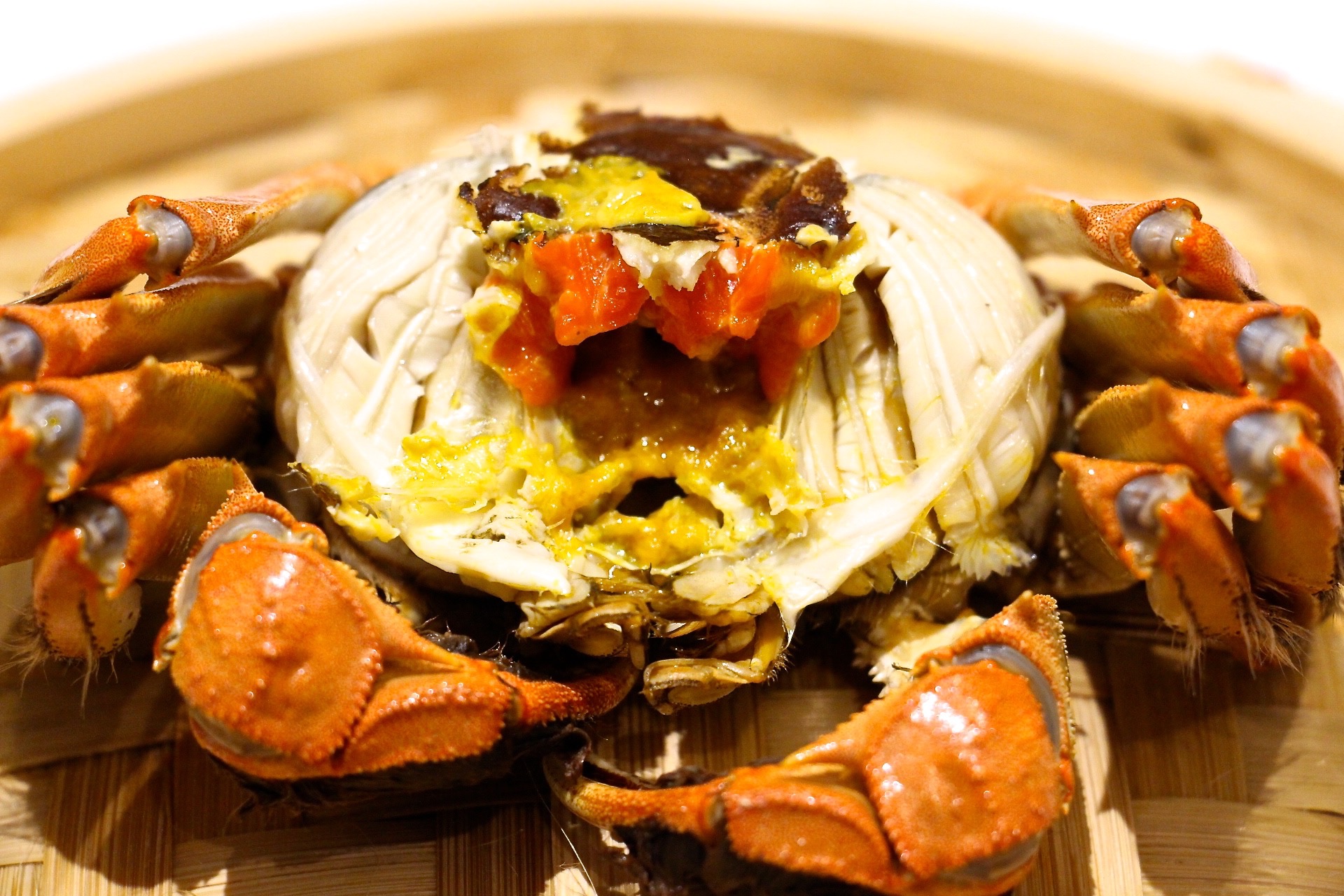 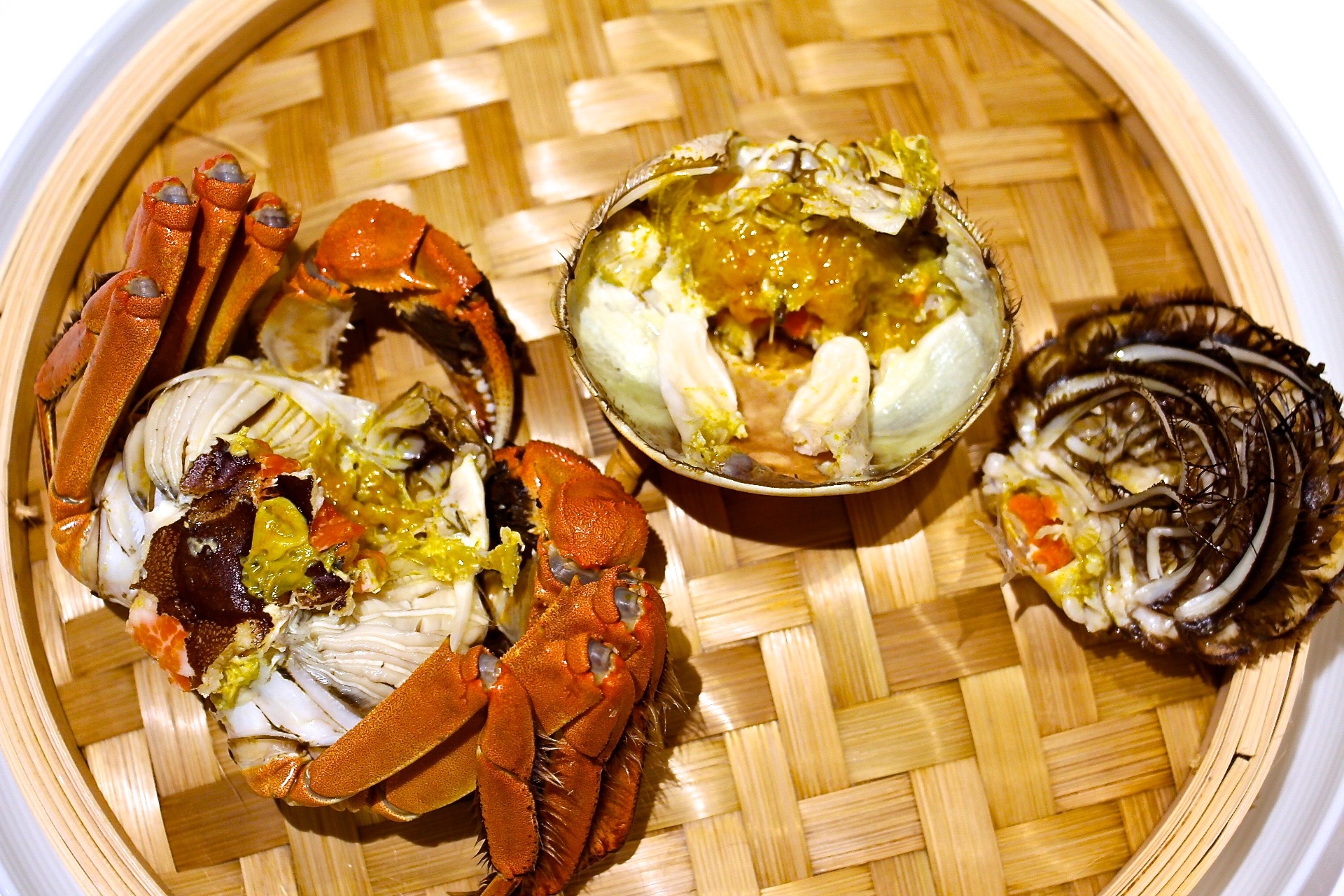 The money shot!!!  Look at all the luscious golden roe!!! 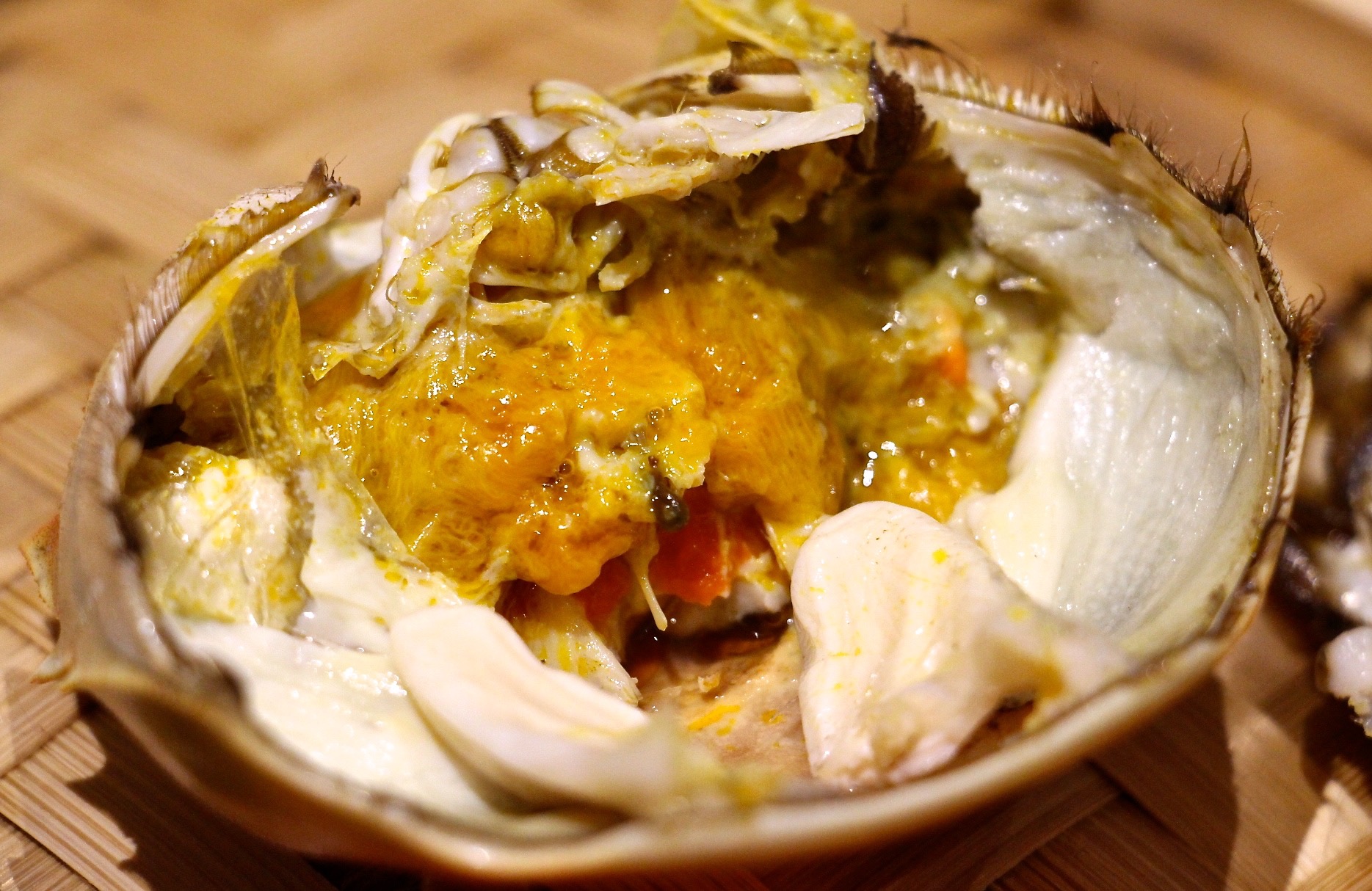 This article originally appeared in girlmeetscooking.com