Restaurant REVIEW: A Luxurious Dip at The Ocean

Dive into The Ocean for an experience unlike any other

Swimming in luxury: Stepping into The Ocean felt like entering the Little Mermaid’s underwater kingdom, that is if it were outfitted entirely in Hermès. The newest edition to Le Comptoir’s portfolio of beautiful restaurants, The Ocean is a sprawling 10,000-square-foot giant in Repulse Bay’s The Pulse. Subtle hints of the deep blue sea can be found throughout the venue in chandeliers reminiscent of iridescent bubbles, the coral-reef-inspired furniture and the palm trees that sway their fronds like algae against the floor-to-ceiling windows. One could easily get bewitched watching the mesmerising jellyfish blooms in the many built-in aquariums lining the dining room. The inspiration behind the menu is divided between two chefs: Executive Chef Agustin Balbi and Japanese cuisine chef Yukio Kimijima. Chef Agustin entices diners with his blend of Japanese and French creations, while Chef Yukio specialises in the omakase experience at the UMI bar. 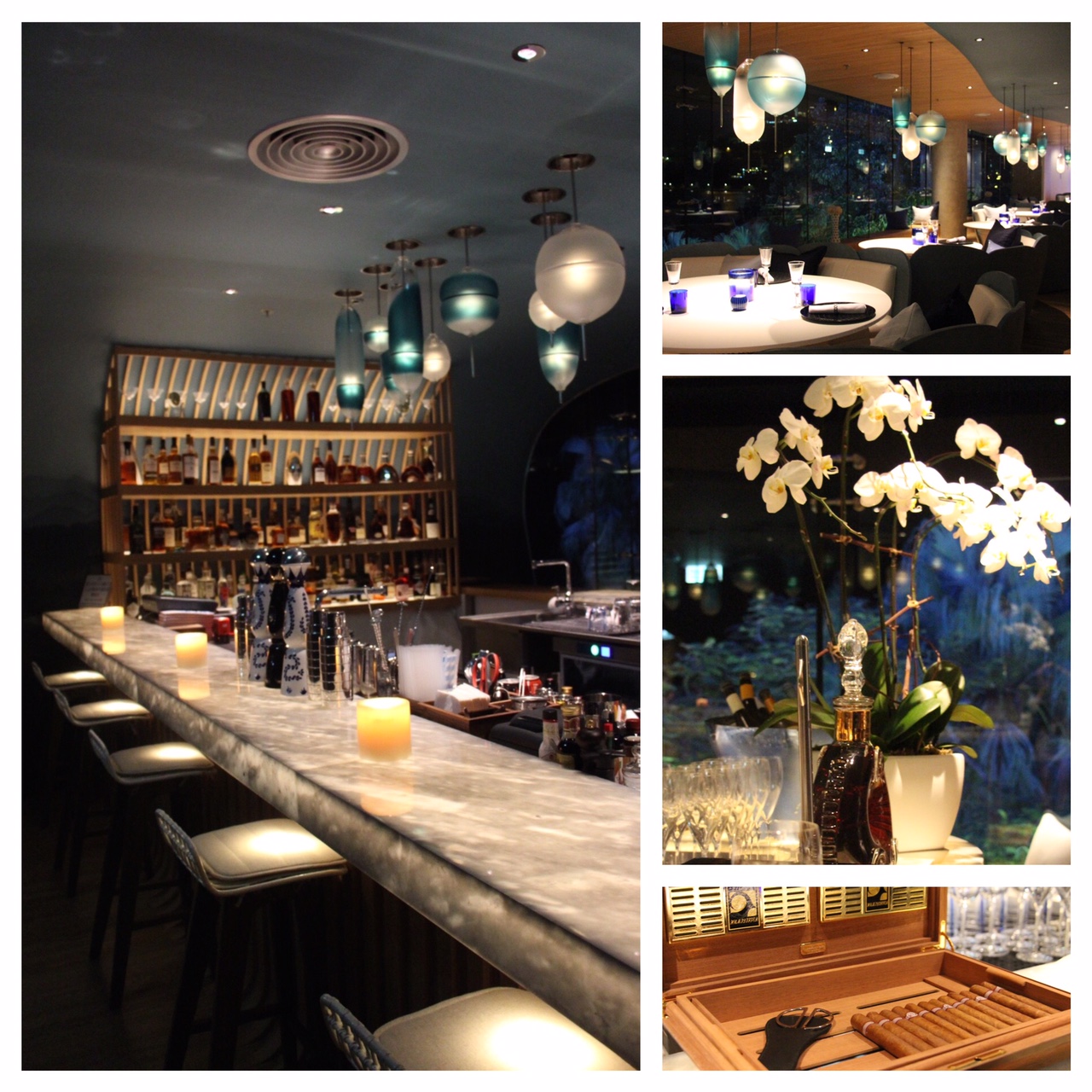 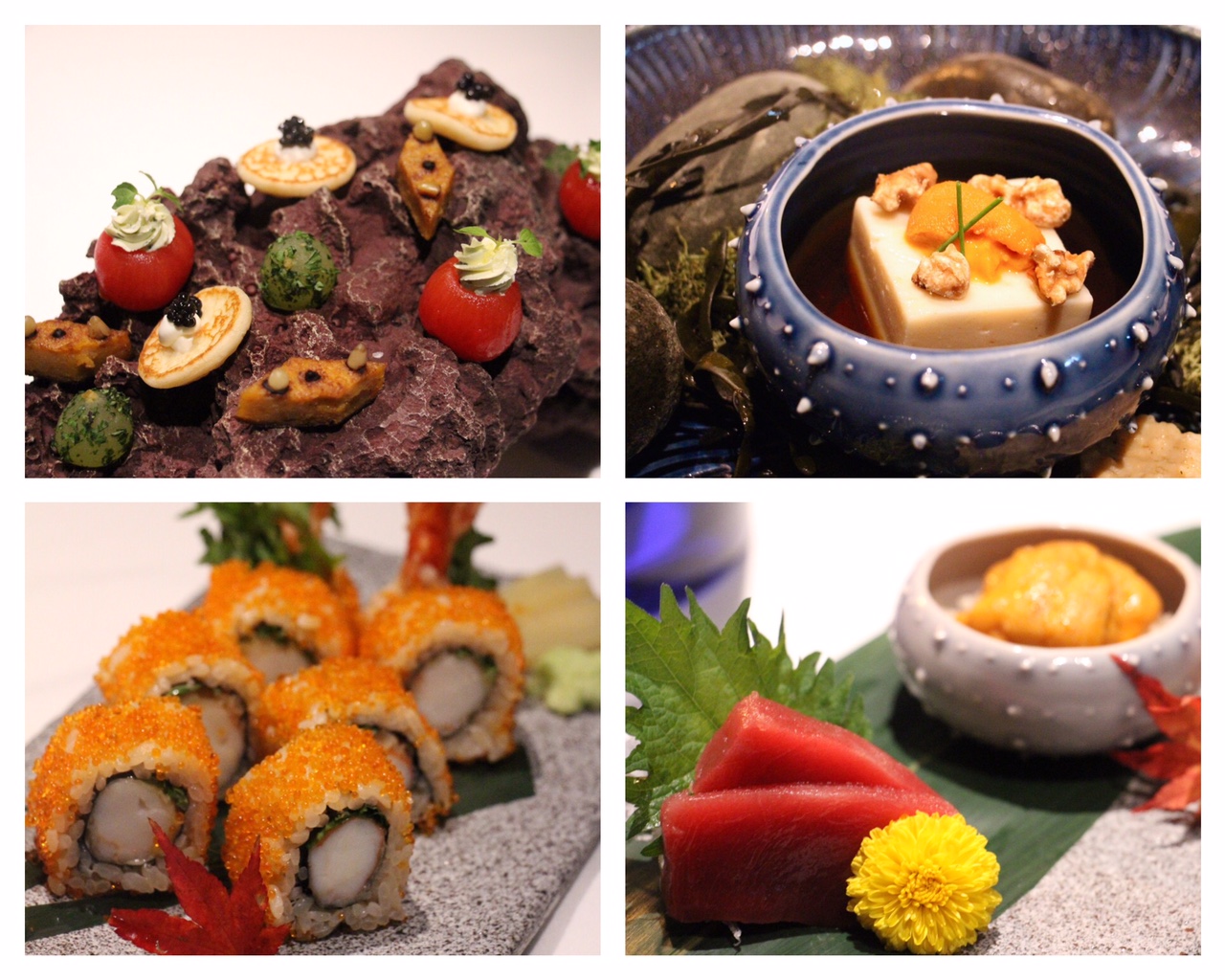 Plenty of fish: As a whimsical twist, the menu is divided into four sections, each offering a sampling of dishes. There’s the three-course Horizon Lunch ($488), the five-course First Dive ($888), the eight-course Deep Blue ($1,188) and the gut-busting ten-course Ultramarine ($1,488). We dove into the First Dive menu, starting our meal with a 'sea breeze' of creamy homemade tofu topped with walnuts and uni, steeped in ponzu, served on a plate adorned with coral and seaweed. As appetisers, the scallop crudo with seasonal vegetables was subtle yet refreshing, while the house-smoked red snapper with chanterelle and pickled apple provided more pronounced flavours. The tuna tartare, accented by sharp Dijon mustard and crème fraiche against the coolness of sliced cucumber, was the favourite of the three. Warm appetisers included a seared scallop nestled over corn purée and shaved fennel and a carrot gnocchi embellished with tender octopus and chimichurri. Thanks to the flavourful chimichurri sauce, the gnocchi was the clear favourite, as the scallop lacked contrast against the rather monotonous corn purée. 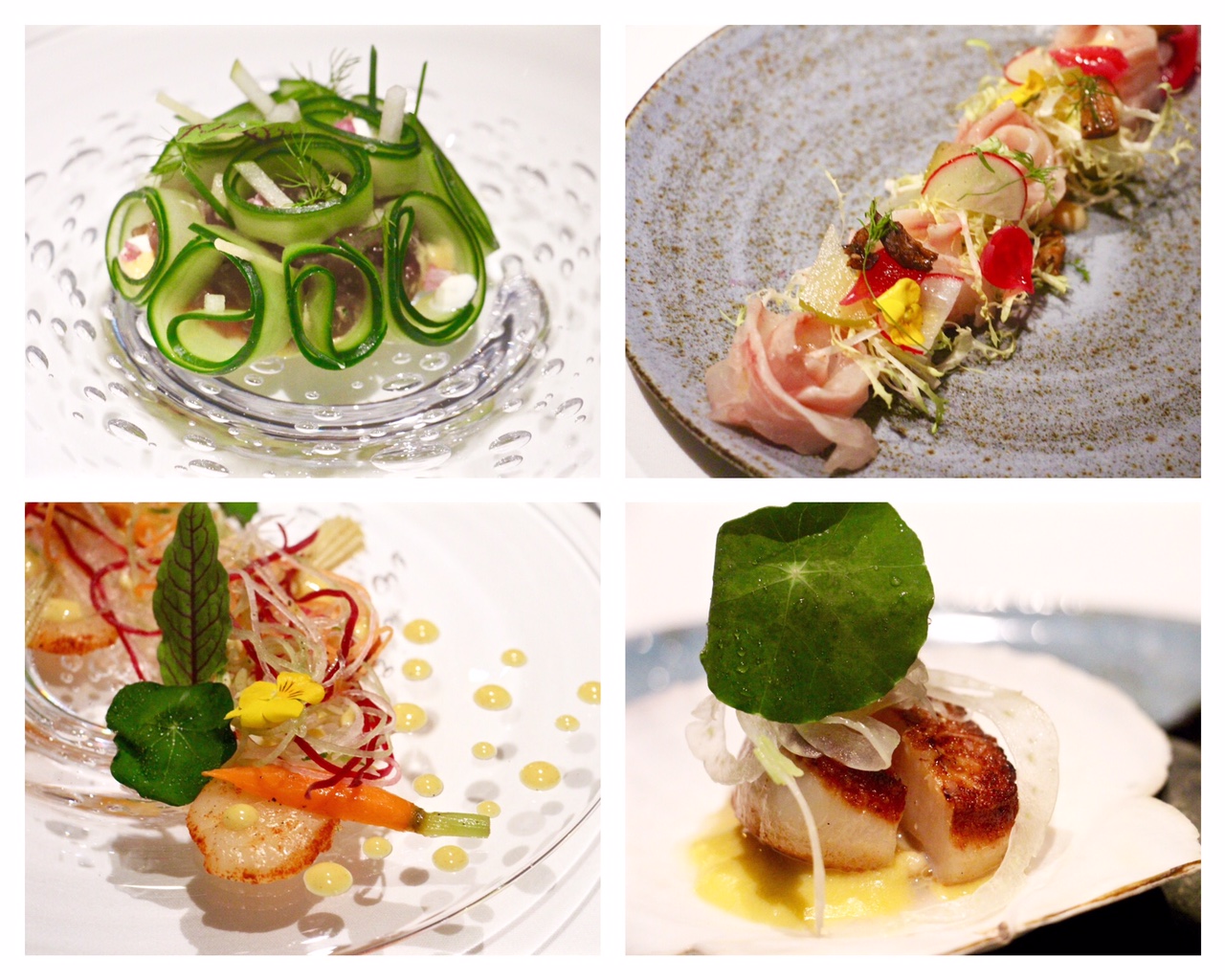 As mains, the hearty wild mushroom tortellini with lobster confit and earthy maitake mushroom won owing to its robust umami accents, while the pan-seared sea bass over wild rice was slightly overcooked. The sous-vide turbot with nori butter was a touch bland, and it was hard to detect any notes of nori in the sauce. 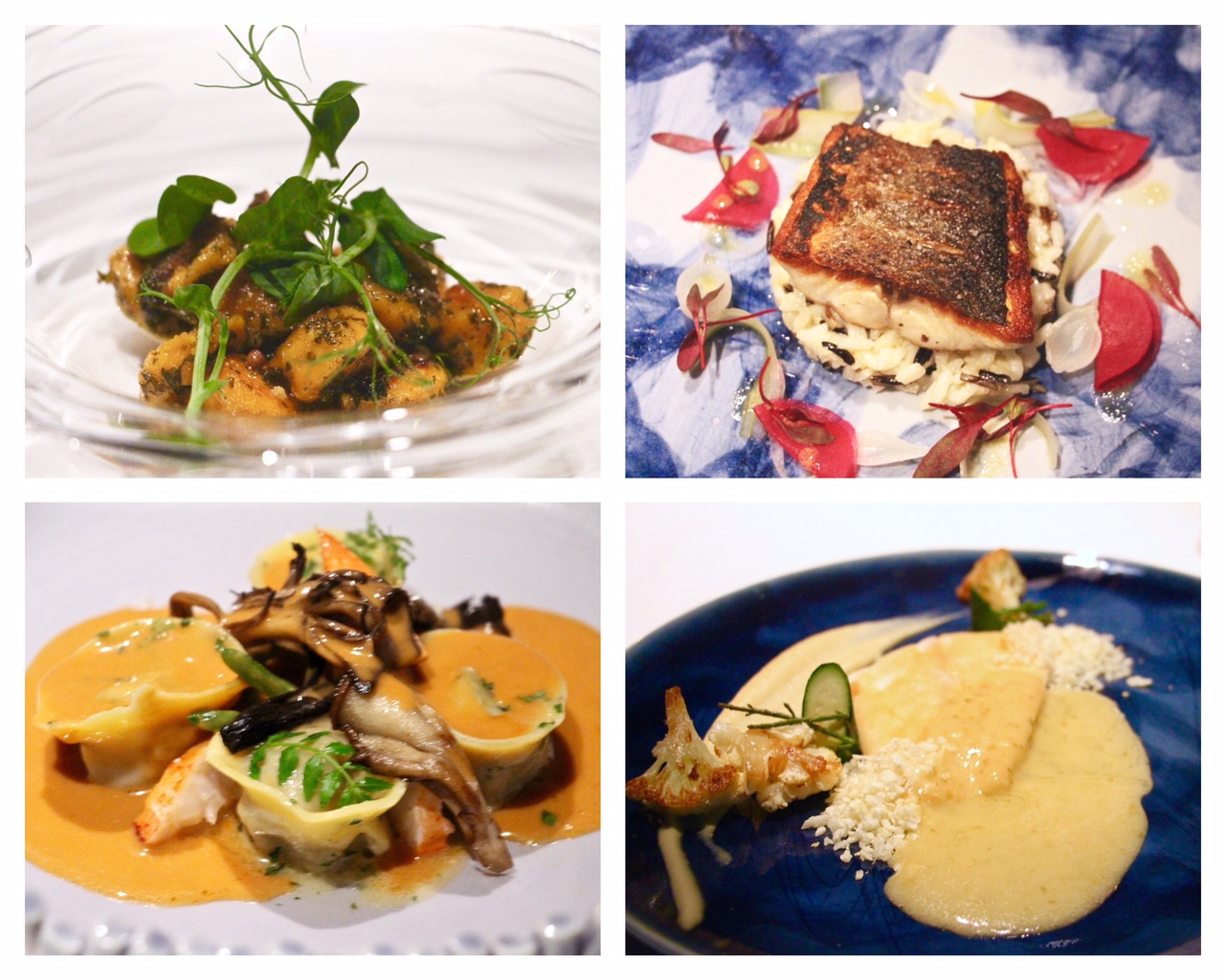 All three of our desserts were beautifully presented, with top marks going to the chocolate dome encircling yoghurt ice cream amidst splashes of pickled blackberries, although the tartness of the yoghurt didn’t quite complement the chocolate. The hazelnut crumble and sponge cake with orange looked enticing on paper but lacked the expected citrusy notes to offset the rather bland cake. The passion fruit, coconut foam and rum granita provided a refreshing, tropical end to our meal. 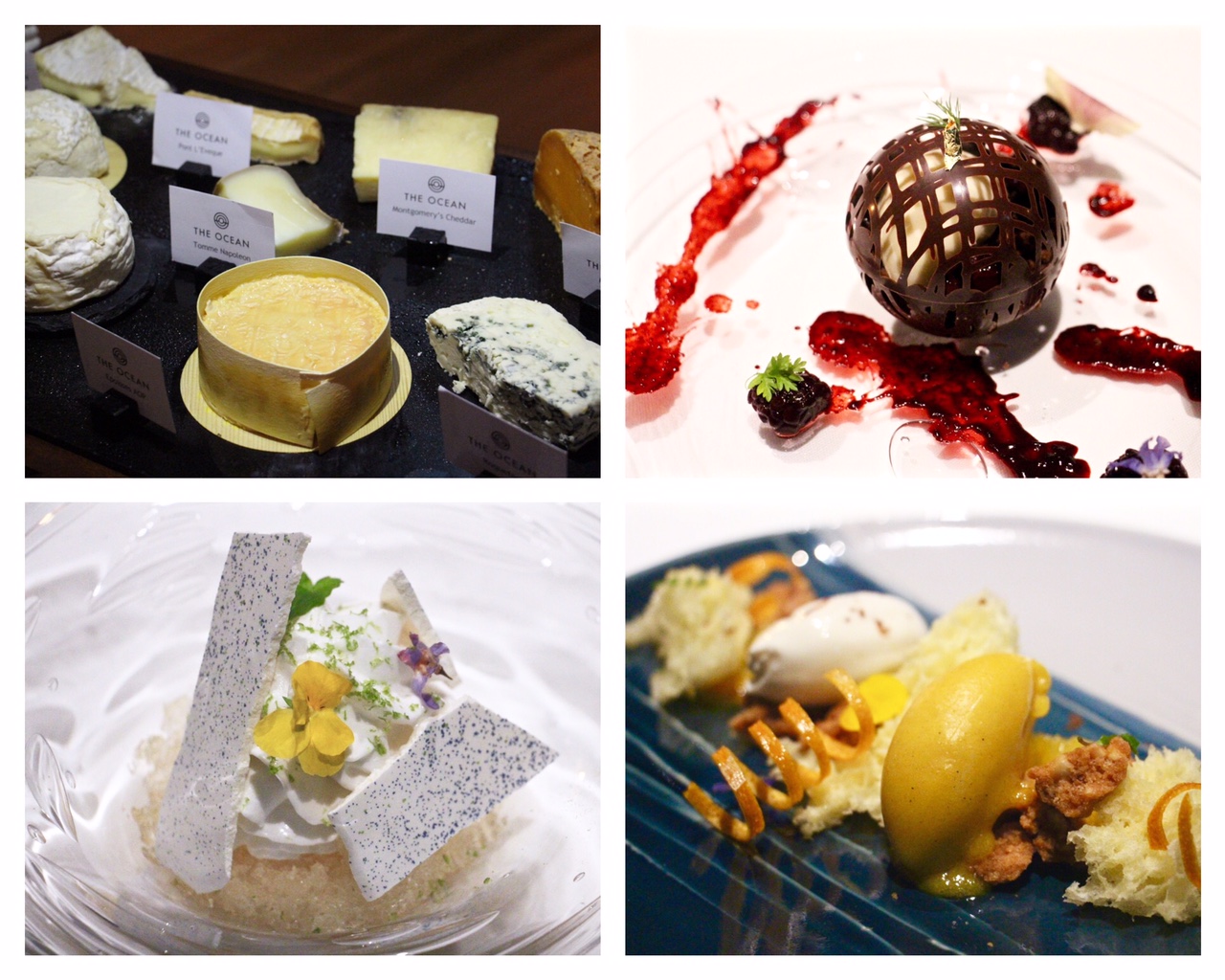 Verdict: Like a well-appointed stage, The Ocean is spectacular, but we found ourselves waiting for the headliner dish that never arrived. It’s certainly an exquisite venue for impressing guests or for a special occasion, and although the dishes were, on the whole, well executed, just don’t expect the flavours to be memorable. This is one of those instances where it helps to be ever so pretty.