A fun, playful take on classic Chinese cuisine, we tested out the very photogenic dishes to see if they're worth all the hype

From the creators of whimsical dim sum restaurant Yum Cha comes another contemporary take on classic Chinese cuisine. Dragon Noodles Academy, the latest venture by Dining Workshop, is a modern makeover of traditional dim sum and noodles and other classic dishes. Walking into the sizeable venue feels like entering a 1970s kung fu den, with the entrance wall covered in an intricately carved golden dragon and giant lion heads adorning the length of the dining room. A long open kitchen aptly named the Lobster Noodle Station dominates the space, giving diners a ringside view of the chefs expertly crafting freshly hand-pulled noodles and dim sum.

The place was packed during our tasting in the middle of the weekday lunchtime hustle. First to arrive was a crispy lobster puff ($69 each) disguised in the shape of a lobster thanks to the use of the crustacean's formidable head and tail. Buttery, flaky pastry painted with carrot juice to further enhance the lobster's lifelike effect came wrapped around juicy lobster meat, coriander and water chestnut. Each morsel was piping hot and addictively flavoursome, although a serving would best be shared as the pastry is incredibly rich.

Next came black truffle taro puffs ($49 for three) filled with the intoxicating fungi, courgette, king oyster mushroom, corn and carrot. We enjoyed the flavours, although each puff was a bit overwhelmingly buttery as a follow-up to the lobster puff. The presentation also needed a bit more work as it was hard to discern the ingredients amidst the ink black pastry.

Following all that rich food, the berry winter melon ($69) was the perfect palate cleanser. Stacked together like a bunch of grapes, each ball was dipped in blueberry sauce to enhance the illusion. We commend the fact that the restaurant uses no MSG and only vegetable juices as natural colouring for their whimsical dishes, making each item both pleasing to the eye and the body. 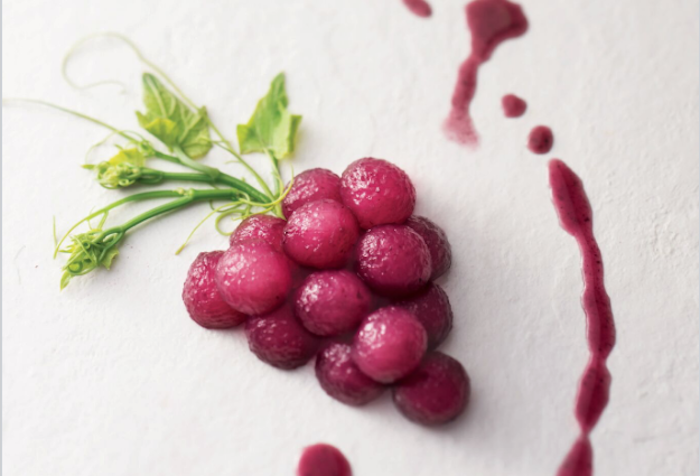 We sampled a selection of handmade noodles, ranging from lobster tail soup noodles ($149) to lobster and shrimp roe lo mein ($149). The soup base is a labour of love – it takes five hours of slow-cooking with three kinds of fresh fish, rock lobster, a mirepoix of diced vegetables and swish of brandy to complete. We thoroughly enjoyed ourselves, slurping the umami-rich broth, and liked the bouncy texture of the freshly made noodles. There is also a sous-vide beef cheek noodle ($129) available, although we felt that it paled in comparison to the lobster. 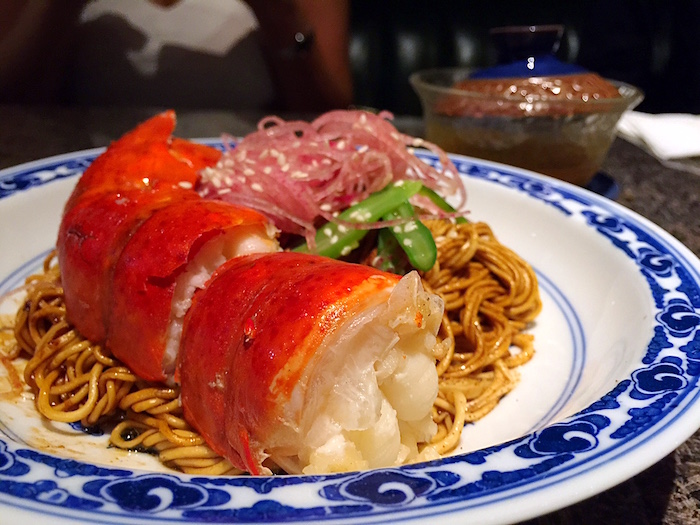 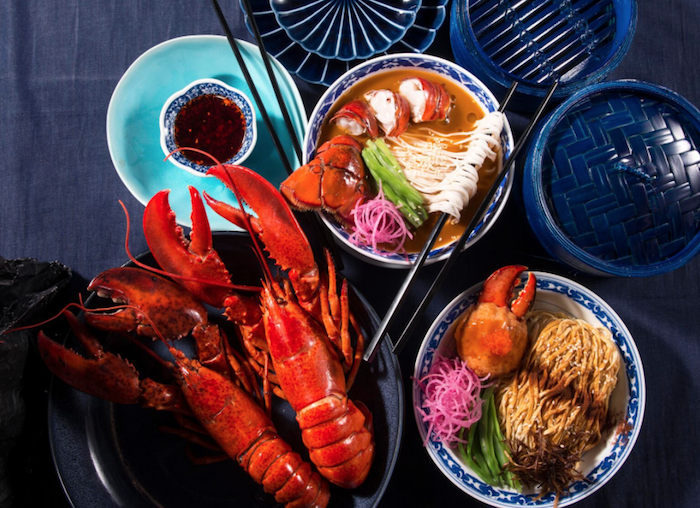 We can never pass up a chance to sample Peking duck. Dragon Noodles Academy's rendition is an eight-week-old Peking duck ($499) roasted over applewood, served alongside pancakes, cucumber, melon, leek and pink cabbage. Aside from the traditional rolled pancakes, diners can also choose from eight other ways to slice and eat their duck, ranging form wok-fried minced duck lettuce wraps to stir-fried duck with mushroom, carrot, celery and spring onion. We found the duck to be a tad underwhelming; it didn't have the tender flesh and crispy skin we craved. The lettuce wraps, however, were decidedly flavourful. 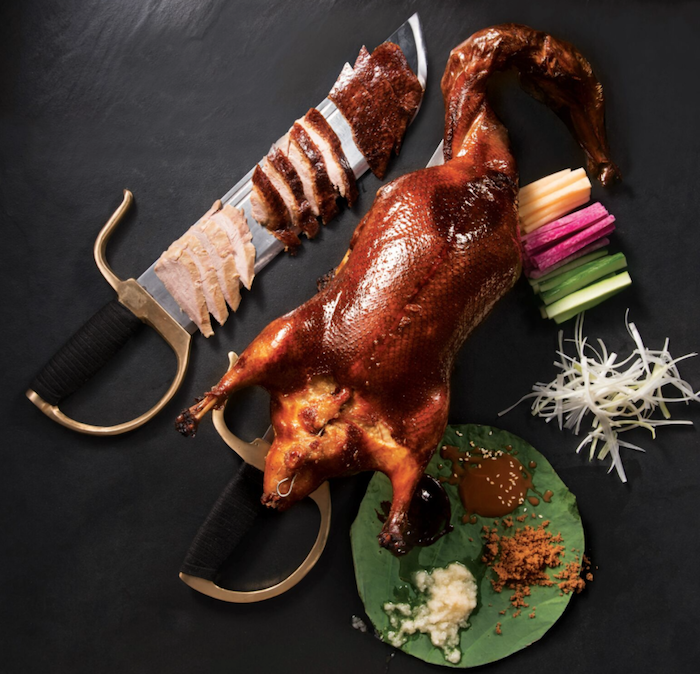 The char siu, or barbecued pork ($119), looked as if it had landed at our table mid-spa-session on a bed of hot stones. We liked the attention-grabbing presentation but weren't enamoured with the flavours. It lacked the characteristic crisp caramelisation that hallmarks a great piece of BBQ pork. 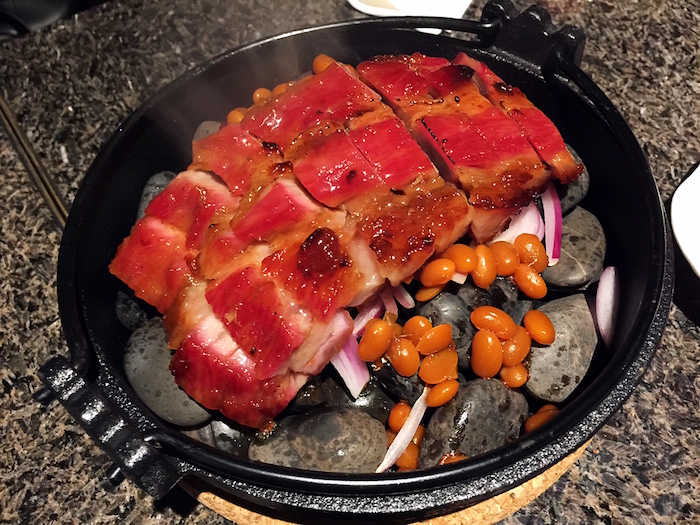 Another hefty dose of meat came in the form of ale-braised pork knuckle ($399) over rice, dotted with pomegranate. The dish arrived with much fanfare in a massive paella pan and was deliciously and dangerously moreish. The pork melted away in fat slivers into the rice, and we greedily gulped down bowl after bowl. Because of the ratio of rice to meat, we wouldn't consider this a meat dish but rather a sort of fried rice group-sharing meal. 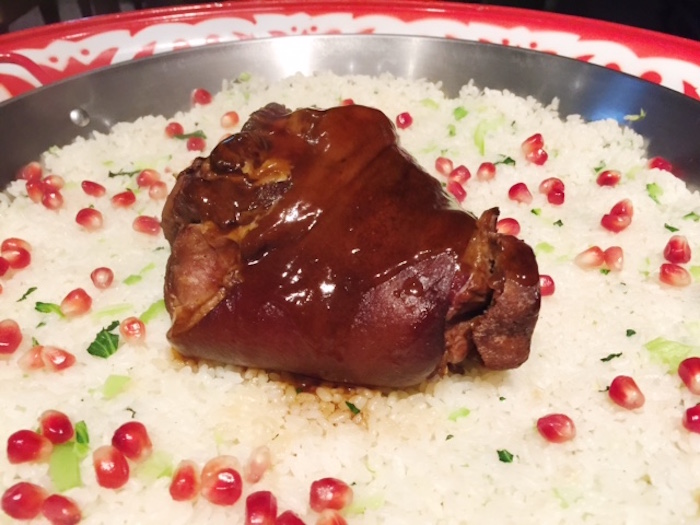 Lastly, we had to counter our gluttonous meat fest with some vegetables. The baby cabbage florets with ham ($99) arrived resembling a work of art, with cabbage stalks cut artfully to resemble radiant blooms. The sweetness of the cabbage blended deliciously with the salty Chinese ham broth and the umami pops of fried sakura shrimp. 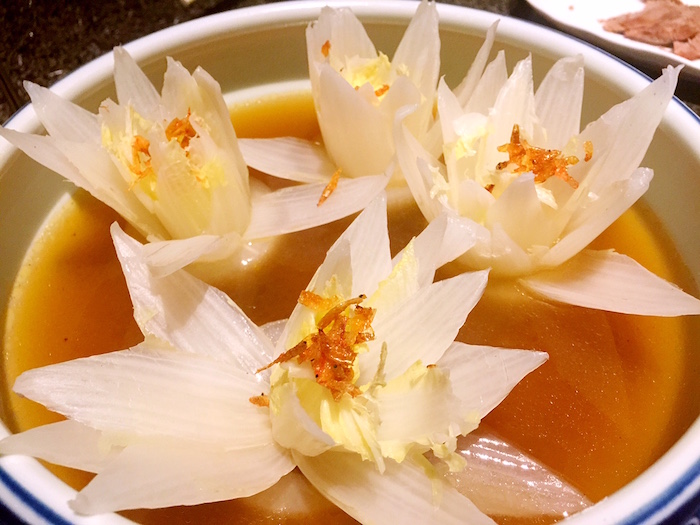 Verdict: There were some hits and some misses, but as the restaurant is in the very early stages of operation, it would be unrealistic not to expect any teething problems. We loved the creativity that went into the presentation and the new ways of pairing classic Chinese flavours with international ingredients. Like Yum Cha, we can certainly forsee many likes on Instagram thanks to the restaurant's fanciful presentation efforts. This would be a fun spot to introduce newcomers to Chinese cuisine but may be lacking in depth for seasoned aficionados.