CNY Feasts: Where to Eat and Watch the Fireworks

We scoped out the best dining spots in town for the Chinese New Year fireworks, as well as the top holiday goodies

Hot on the heels of Christmas and New Year's Eve follows Chinese New Year, yet another reason to pig out. This year, we celebrate the arrival of the Fire Rooster in the only way we know how: by stuffing our faces with plenty of nosh.

Here's our list of some of the tempting offers this CNY:

What: Seafood Room, with its panoramic views of Victoria Harbour, is the perfect spot to catch this year's mesmerising CNY fireworks display. Complementing all that gunpowder is a decadent five-course menu full of choice ingredients ranging from abalone and whole turbot to Wagyu, all accompanied by chilled flutes of Perrier-Jouët champagne. Priced at $1,388 per person, be sure to arrive before 8pm for the fireworks! 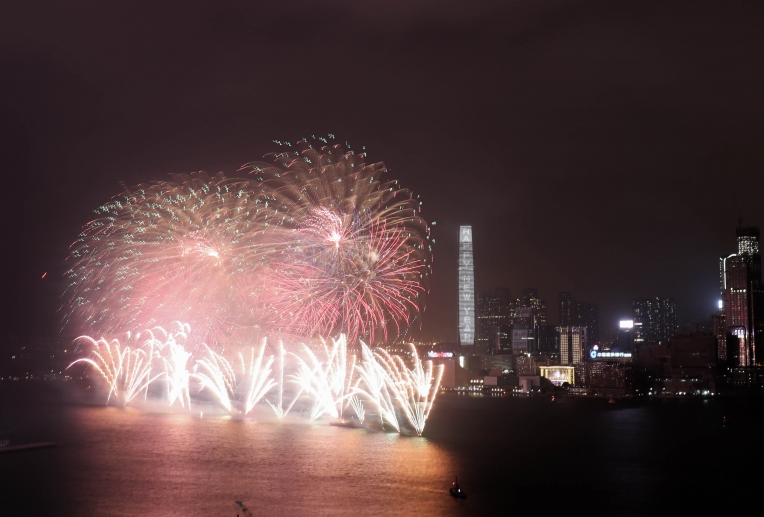 What: Sweeping views of Victoria Harbour and immaculate Chinese cuisine are a winning recipe for any CNY feast, and both can be found at the Grand Hyatt's revered One Harbour Road restaurant. Executive Chef Li Shu Tim has created a special menu full of luxurious indulgences ranging from wok-fried prawns and pigeon in XO sauce ($208 per person), to slow-cooked pork knuckle ($308), to braised mushrooms filled with shrimp mousse and abalone ($268 per person). 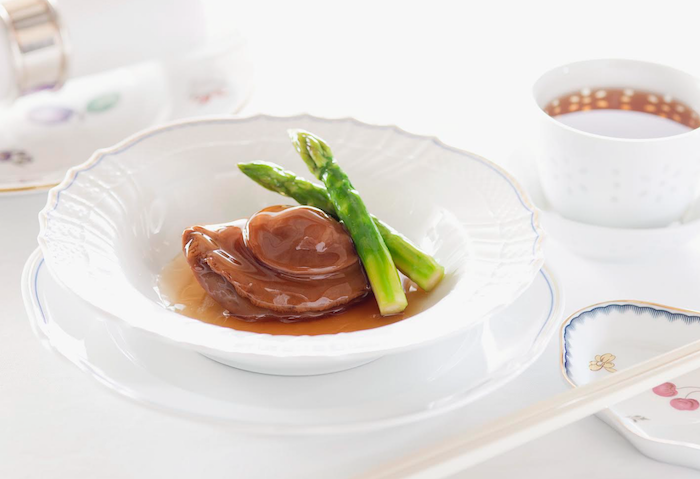 What: The grande dame of Hong Kong knows how to celebrate the Lunar New Year in style. Festivities start early on Saturday morning, 28 January with a traditional lion dance in the lobby. Spring Moon, the hotel's acclaimed Chinese restaurant, will offer a six-course menu at $1,688 per person. Traditional Chinese New Year puddings made with taro, water chestnut or turnip are also on sale from now until 27 January. A dinner on the 29th guarantees an invitation to the hotel's Sun Terrace to watch the fireworks over Victoria Harbour. 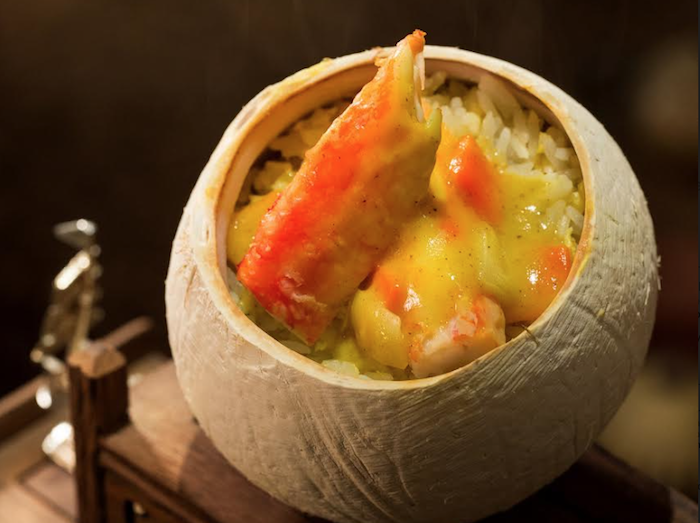 What: Boasting one of the best locations for viewing the Lunar New Year fireworks, Hutong offers panoramic views of Victoria Harbour alongside mouth-watering Chinese cuisine. This CNY, the restaurant is teaming up with the OneSky charity to sponsor orphaned children in China. Each guest is invited to place a wish on the 'wishing tree', with part of the proceeds from each meal going towards sponsoring three children in need. There's also a tempting lo hei salad made up of salmon and hamachi fillets to celebrate the new year, to be tossed tableside with family and friends. 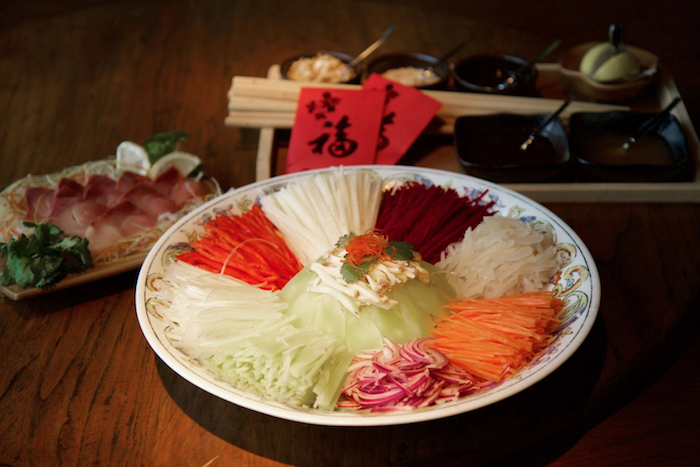 What: Chinese New Year feasts are full of 'lucky' dishes with auspicious meanings. Above & Beyond at Hotel ICON offers a number of these dishes, from marinated shredded crispy chicken to braised pork knuckle with black moss. It's also the perfect spot to watch the fireworks on 29 January, with an eight-course dinner priced at $1,488 per person, alongside a glass of Perrier-Jouët bubbles. There's an al fresco champagne party with a live DJ and free-flow champagne on the ninth floor for those who want to enjoy the fireworks outdoors. 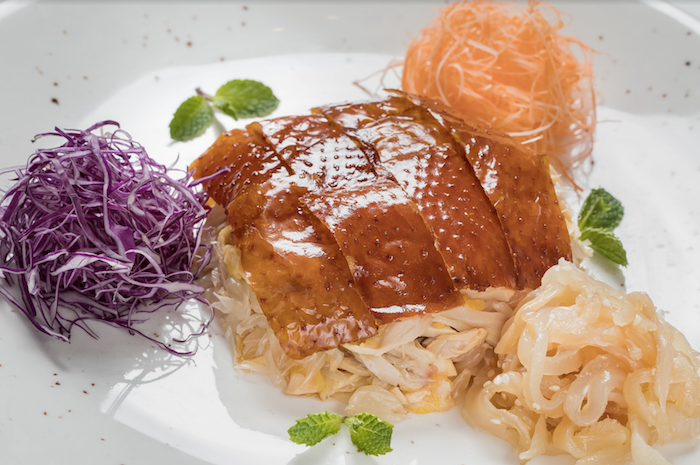 What: Designed by Sir David Tang of Shanghai Tang, China Tang oozes Chinoiserie charm. The refined Chinese restaurant focuses on flavours from Beijing, Sichuan and Canton and has composed a luxurious menu in celebration of Chinese New Year. Braised whole Yoshihama abalone with goose web, sautéed lobster with elm fungus and roasted crispy chicken with black truffle are just a few of the speciality dishes that compete for attention on the menu. The Harbour City location also boasts floor-to-ceiling windows and an outdoor terrace, both with panoramic views of Victoria Harbour and the CNY fireworks. 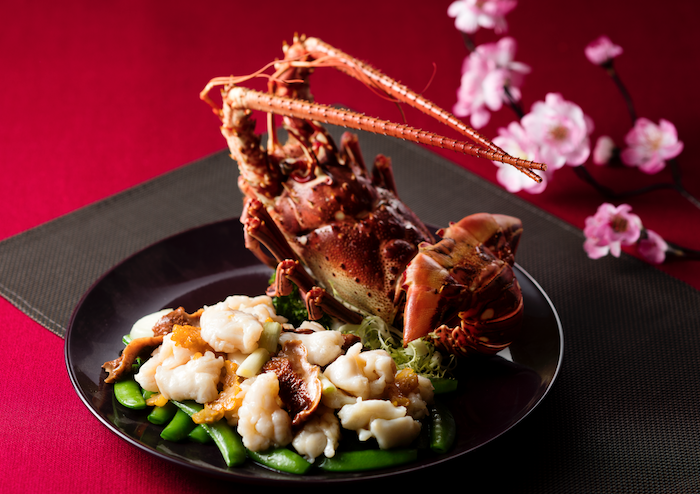 What: Ring in the Year of the Rooster in party central with an auspicious five-course menu with a Korean touch by Executive Chef Kun Young Pak. The CNY menu, priced at $888 per person, includes scrumptious bulgogi buns, a nigiri platter, red snapper and braised pork belly. There's also a boozy option of wine pairings for an additional $488 per person. Although not offering a direct view of the fireworks, the rooftop showcases panoramic views of Hong Kong's cityscape and glimpses of the harbour. 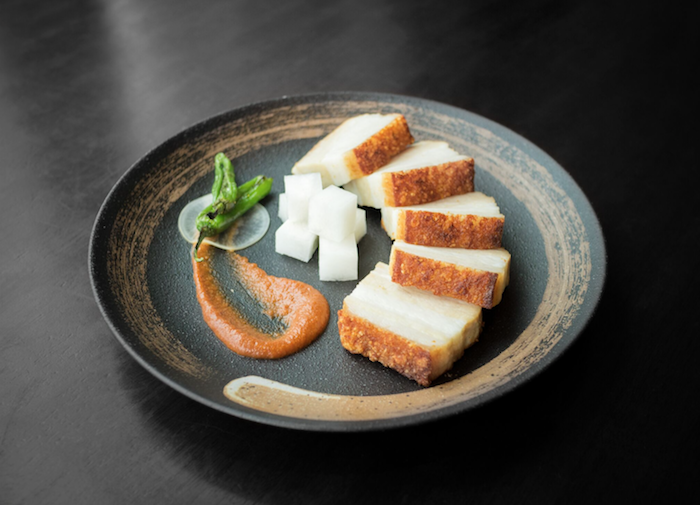 What: Chinese New Year banqueting gets a hip makeover at this buzzy restaurant, at the same time retaining the classic flavours we all love. Chef Jowett Yu brings his favourite dishes to the menu, ranging from crispy chicken served with sticky riceplump with mushrooms and seafood, to steamed whole snapper in white soy, to fork-tender braised beef cheeks. The limelight, however, is on the yee sang platter, a confetti of vegetables with hamachi sashimi, tossed by guests at a height tableside to encourage prosperity in the upcoming year. 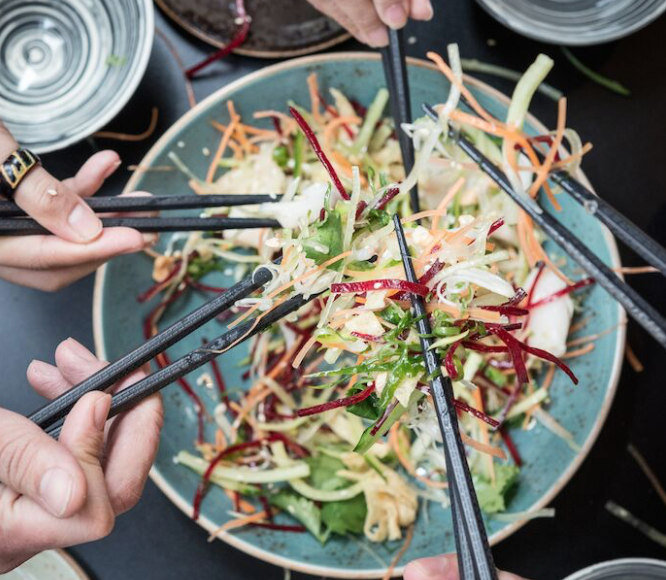 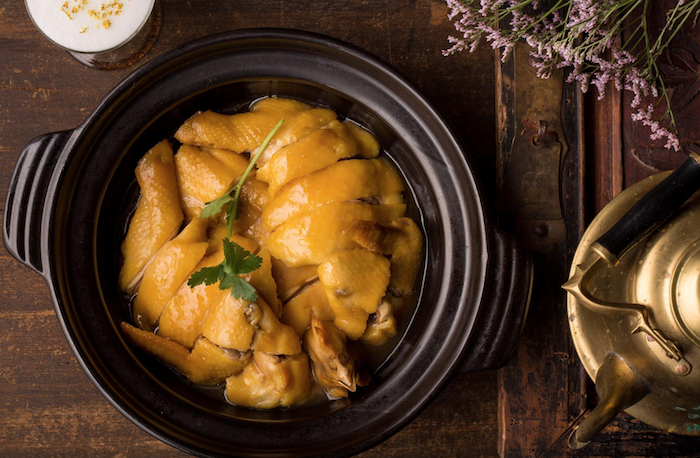 What: Known for its whimsically plated dishes, Dragon Noodles Academy has created a delectable menu for Chinese New Year that's not only pleasing for the palate but also for the eye. There's the traditional southern Chinese lo hei dish, where guests are asked to toss the noodles at a height to reflect the growth of their fortunes in the upcoming year. The eight treasures beggar's chicken comes stuffed with whole abalone and wood ear mushrooms, and the baked Chinese ham puffs are shaped like mini legs of ham. 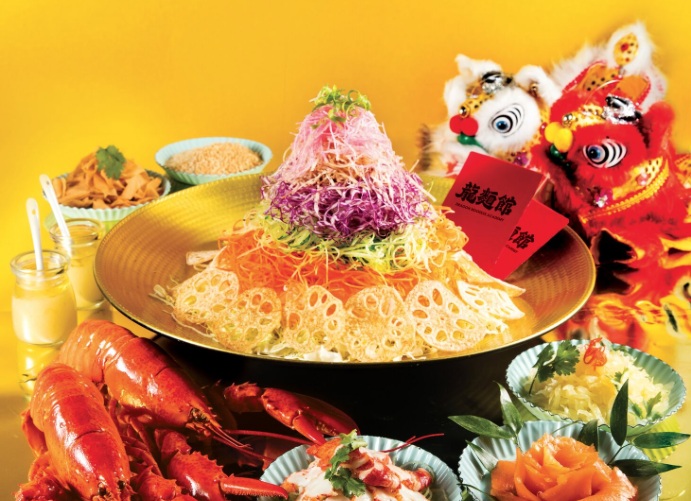 What:Hotpot is definitely one of the most delicious ways to warm up for winter, especially when filled with adorable chicken-shaped dumplings. This trendy hotpot restaurant will be serving up a bevy of animal-shaped dumplings alongside auspiciously named soup bases just in time for Chinese New Year. We are ooh-ing and ahh-ing over the chick-shaped cuttlefish and pumpkin balls, the egg dumplings shaped like golden ingots and the goldfish-shaped shrimp dumplings! 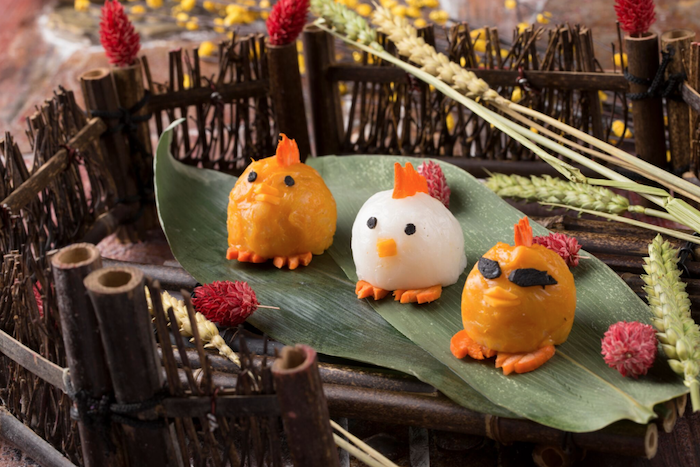 What: Get your drink on with this Argentine restaurant's cool CNY cocktail promotion. Along with your steak, diners can order one of the mixology team's 12 new cocktails ($128 each) – one representing each animal on the Chinese zodiac. For the Year of the Rooster, it's the matcha sour made with Bulleit Bourbon and Chinese matcha syrup, while other tipples include the Year of the Dog's sweet potato cooler and the Year of the Ox's lemongrass mojito. Mocktail versions ($88 each) are also available for sipping. 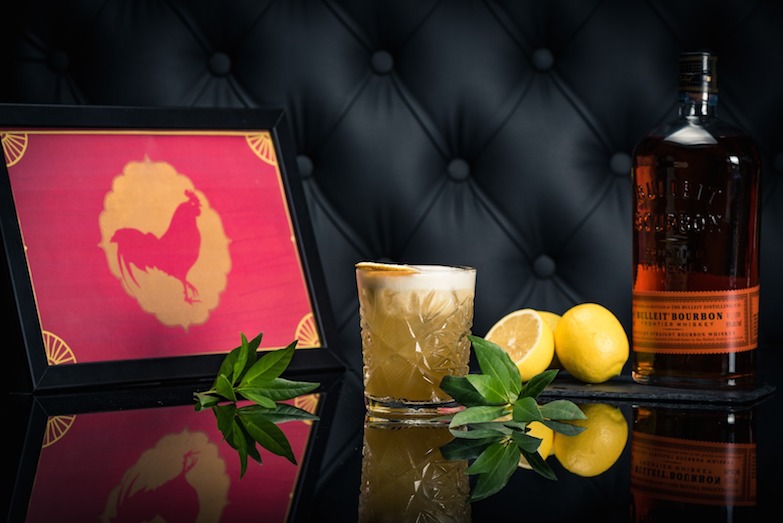 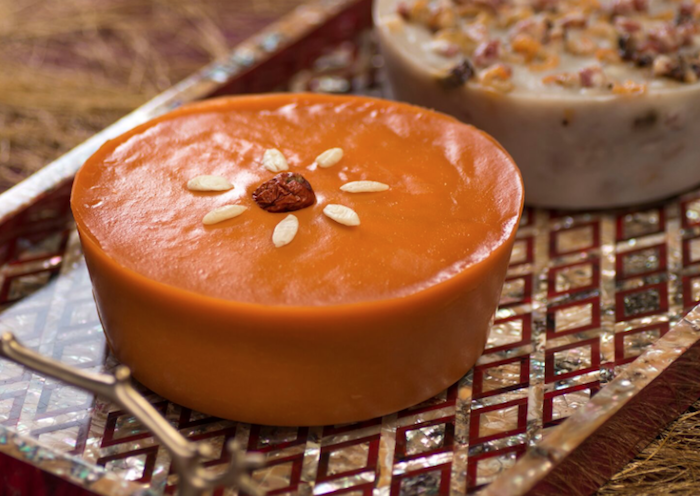 What: No colour is as auspicious as red for the Chinese, and Little Bao has capitalised on this with a unique turnip cake coloured with beetroot. The gorgeous red savoury cake, accented with pops of Chinese sausage, dried shrimp and shiitake, is made with a beetroot and turnip base combined with corn and rice flours. Yuzu peel adds uplifting aromas in place of the traditional tangerine peel.

When: Pre-order and pick up between 15–27 January 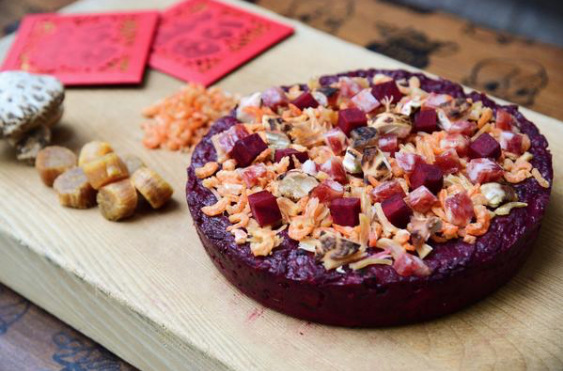 What: Good taste goes beyond the palate at Duddell's with turnip cakes and sweet puddings in limited-edition boxes designed by Goods of Desire (GOD). Each ornate box features hand-drawn designs in commemoration of Hong Kong's heritage and makes CNY gifting both stylish and delicious.

When: Pre-order and pick up before 27 January 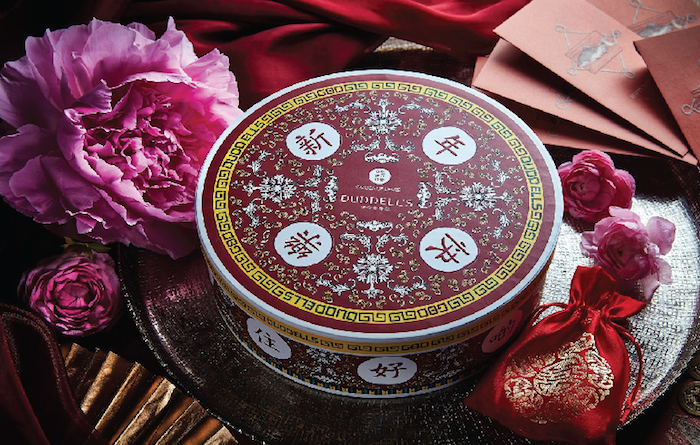 What: The hotel's three-Michelin-starred Cantonese restaurant Lung King Heen pays homage to the classic flavour combination of chrysanthemum and honey and has created a sweet pudding around this exquisite pairing. However, what we are most excited about is the Lunar New Year Barbecue at the Pool Terrace ($688 per person) this January 29th. The mouth-watering lineup includes hibiscus marinated salmon, seafood platter, beef ribs, lamb chops and Iberia pork. Diners can  enjoy the decadent offerings to the backdrop of fantastical fireworks from one of the best viewpoints in town!

When: January 29th for the Pool Terrace barbecue 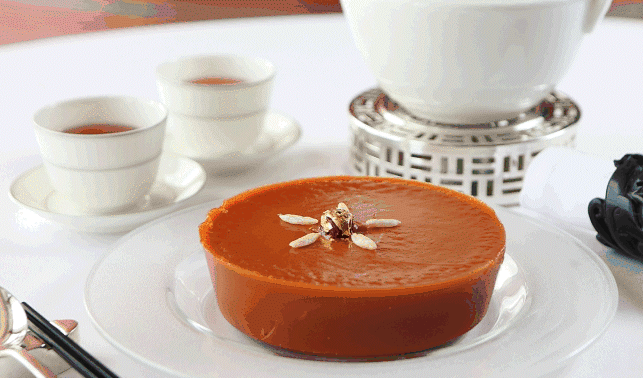 What: Classic Asian flavours such as mandarin orange, star fruit, ginger and mangosteen make up the unique flavours of Godiva's Lunar New Year gift boxes. Boxes range from $328 to $798 depending on the quantity of chocolates.

Where: Visit Godiva for locations 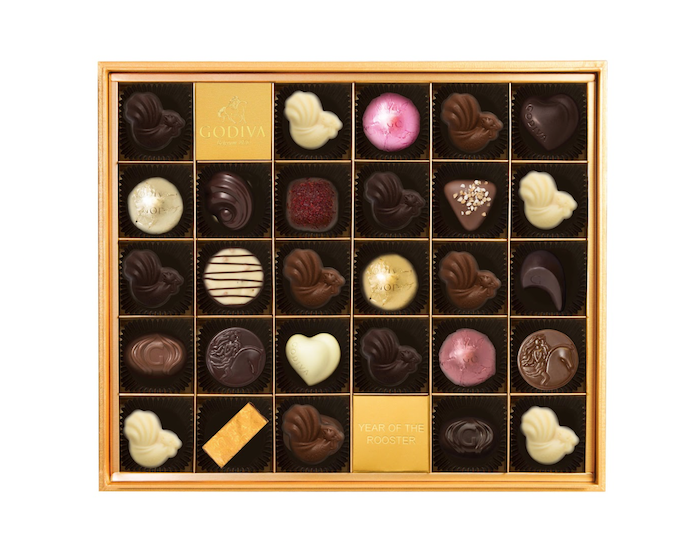 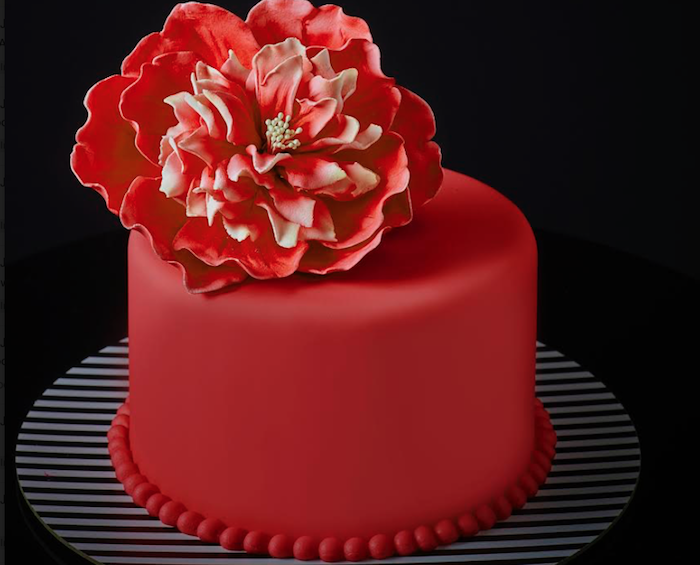 What: Traditional Chinese ingredients such as salted kumquat and dried tangerine are given a twist with the patisserie's Chinese New Year collection. Two new flavours, salted calamansi and choco' tangerine, provide a tasty spin on traditional holiday gifting.

When: Available until 31 January 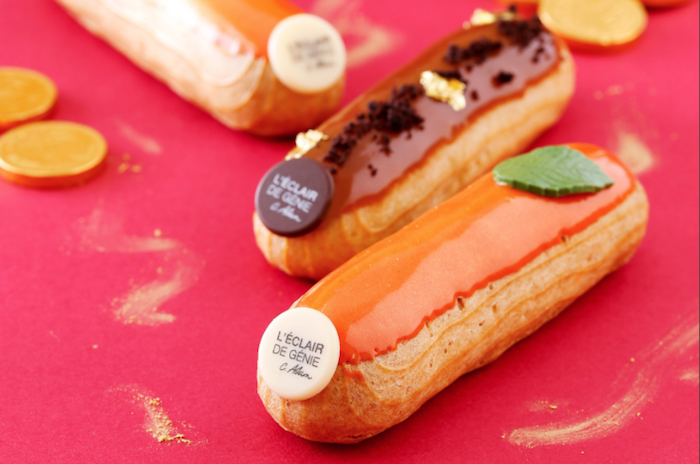