A Night On The Future of Food

by:
by:    clarissalui  on 21 Jul '16
share the ♥
header image: Lily Ng, CEO of Foodie addresses guests at the discussion

Twenty one floors above the buzzing streets of Lan Kwai Fong, a group of industry's experts gathered for a panel discussion at Mettā to discuss the future of food and dining. Offering up their insights on the upcoming trends, as well as their observations on the current market, the evening was split into two parts: the first focusing on food and how it should be prepared and consumed; the second addressing dining trends and the incorporation of technology. 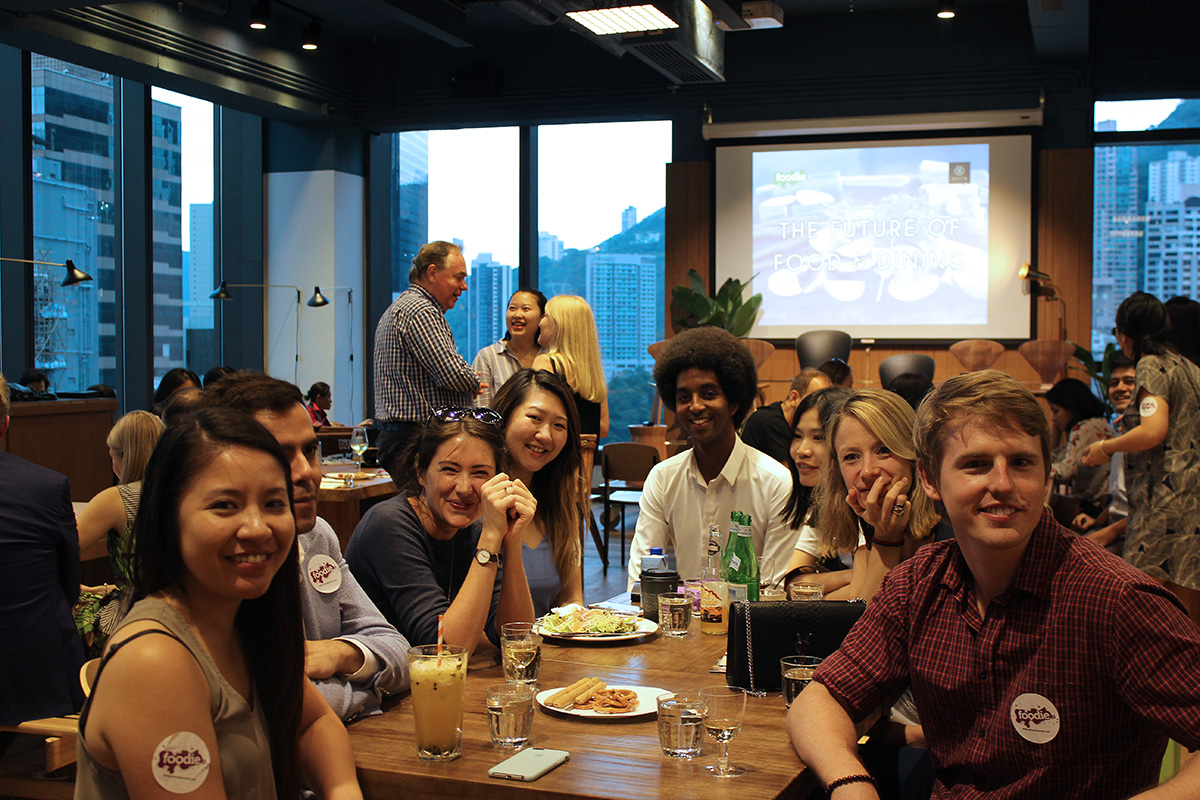 Guests wait in excitement for the discussion to begin

The discussion kicked off with the panel consisting of Alicia Walker; editor-in-chief at Foodie, Katharina Unger; founder of Livin Farms, David Yeung; founder of Green Monday, Lori Granito; founder of Kitchen Sync, and Vinny Lauria; group executive chef at Homegrown Foods. The discussion included a broad spectrum of topics, ranging from the responsible management of food preparation, to the importance of sustainable food, and future of eating insects as a food source. 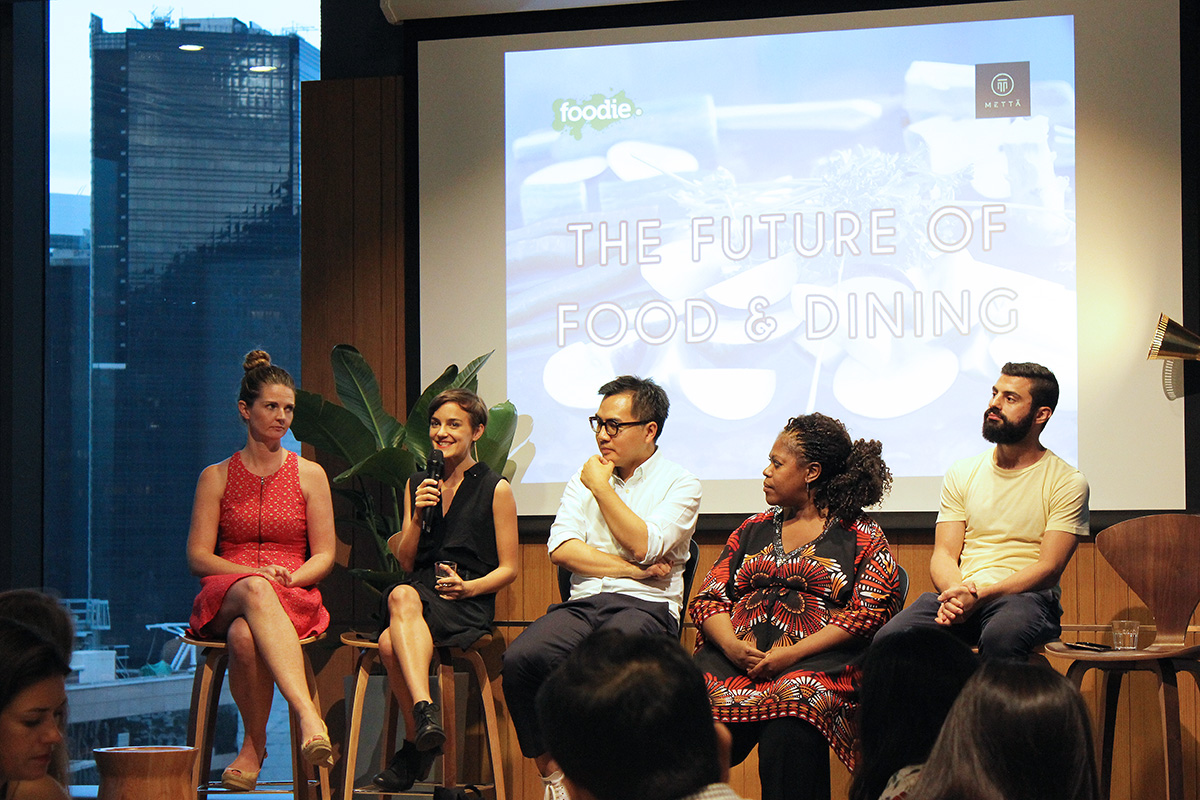 One point suggested by Chef Lauria stuck with us in particular for the whole of the night; when asked to comment on the rise of using fresh and sustainable clean food, and how this trend might continue onwards, Chef Lauria expressed his disagreement to have this seen as a "trend". Instead, he believes that using fresh and sustainable ingredients should be a "mentality" and "paradigm". In today's fast-changing world, trend implies a short-term hype, usually something that rises quickly but also fades out. To embark on a long-term journey to healthy eating and sustainability, merging our dietary habits with environmental conservation is a must, and having the right mentality is the first step. Chef Lauria also mentioned how suppliers would often have excuses to refuse him whenever he suggested simple things, such as working on ways to reduce their packaging. This goes on to show how important it is to have the right attitude towards the issue in order to recognise the real objective. 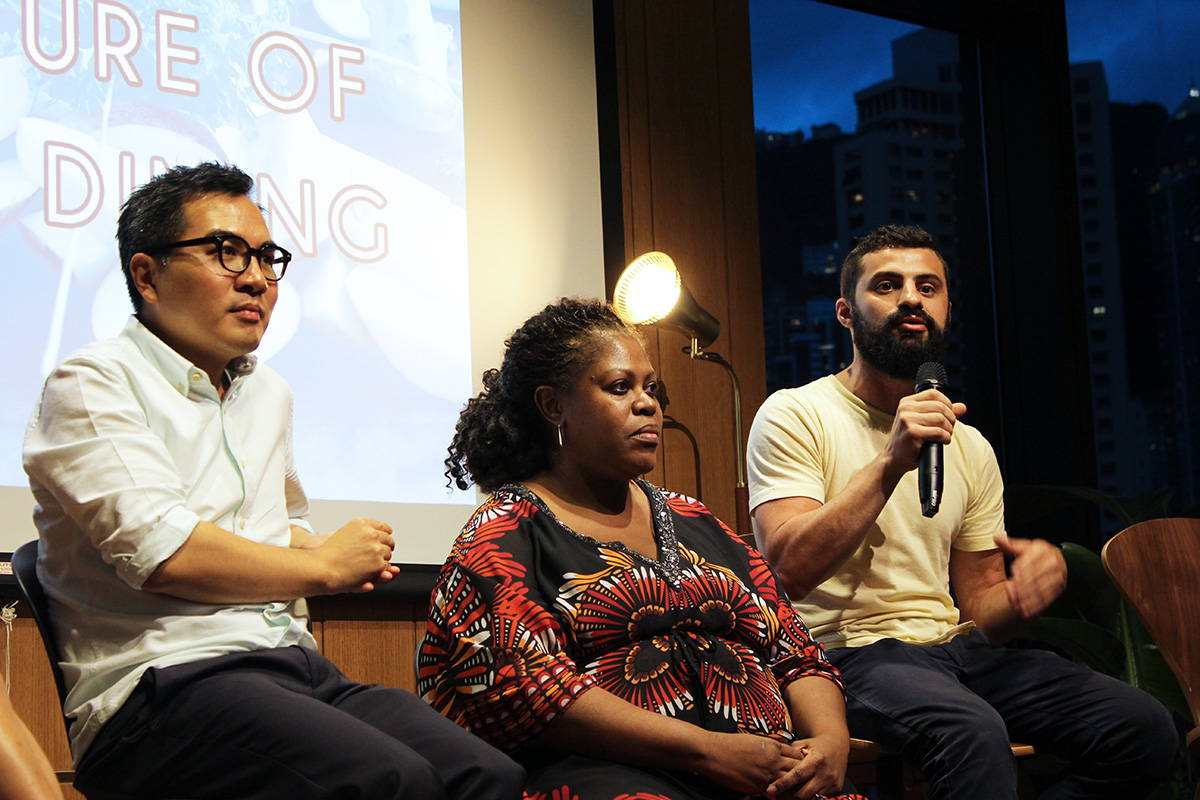 To back up Chef Lauria, Lori Granito also indicated that education on such issues should start from the beginning, so that more people in the industry may adopt the correct mindset, and play a part in helping the world move towards sustainable clean eating. 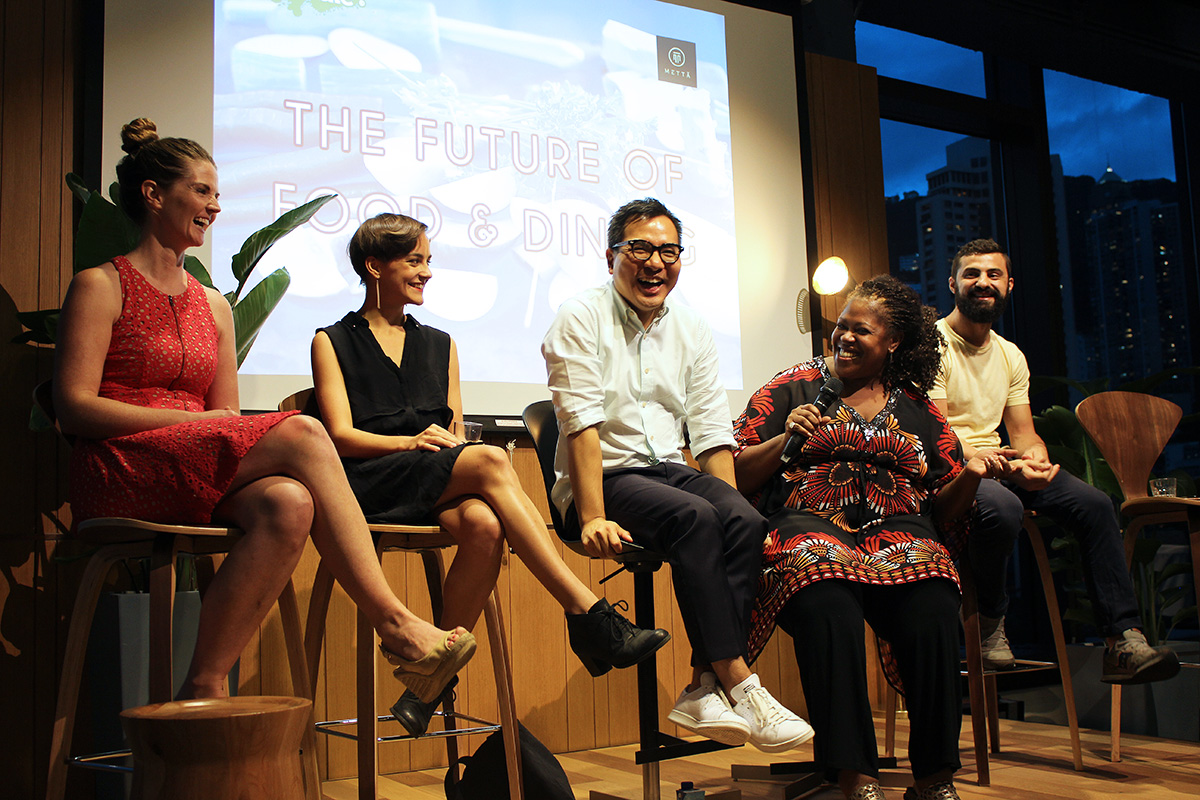 Lori Granito's added humour along with her interesting outlook

David Yeung elaborated on his view of sustainable eating by providing details on his concept of using various plant species to produce sustainable sources of protein. He quoted statistics on the consumption of meat, pointing out the great amount of greenhouse gas caused by livestock, which is highly unsustainable, and how adopting a plant-based lifestyle will improve the situation. It was interesting to understand how choosing a plant-based diet would be a much better way to sustain the planet and its resources. For most people, it is simply a matter of being accustomed to consuming meat and having the world shift to a plant-based diet will definitely require more time, but from David Yeung's well-researched viewpoint, it is seems a plausible and necessary direction for the population.

On the topic of protein sources, Ms Unger suggested entomophagy, the consumption of insects. Commonly, the idea of consuming insects may be daunting, but really, it is only the stigma we have against insects. If we can get over how they look, and find ways to make them delicious, then there will be nothing to fear. Miss Unger also mentioned that people are attracted to food by their taste and unique story, we found that they in fact have quite a neutral taste. With more promotion and education on the idea, more and more people will become used to the idea of eating insects as they are a great source of sustainable protein. 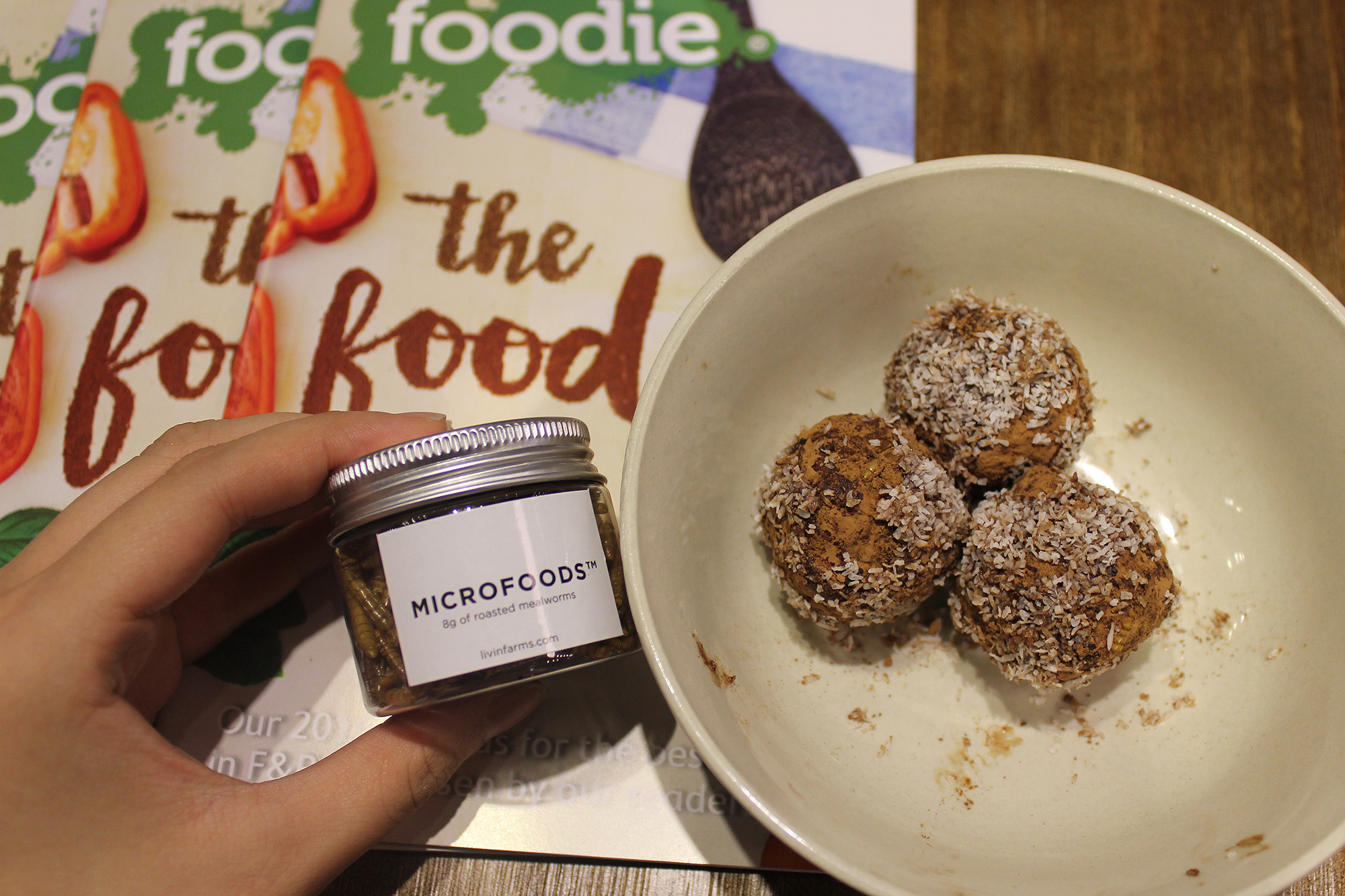 Snacks brought in by Livin Farms made with apricots, oats, and roasted mealworms

On to the second part of the night on dining and technology, Edgar Sanuy; corporate chef at Maximal Concepts, Brian Mak; country manager of The Entertainer Hong Kong, Wesley Tang; general manager at Chope, and Brian Lo; general manager at Deliveroo Hong Kong dished out their views on current trends. 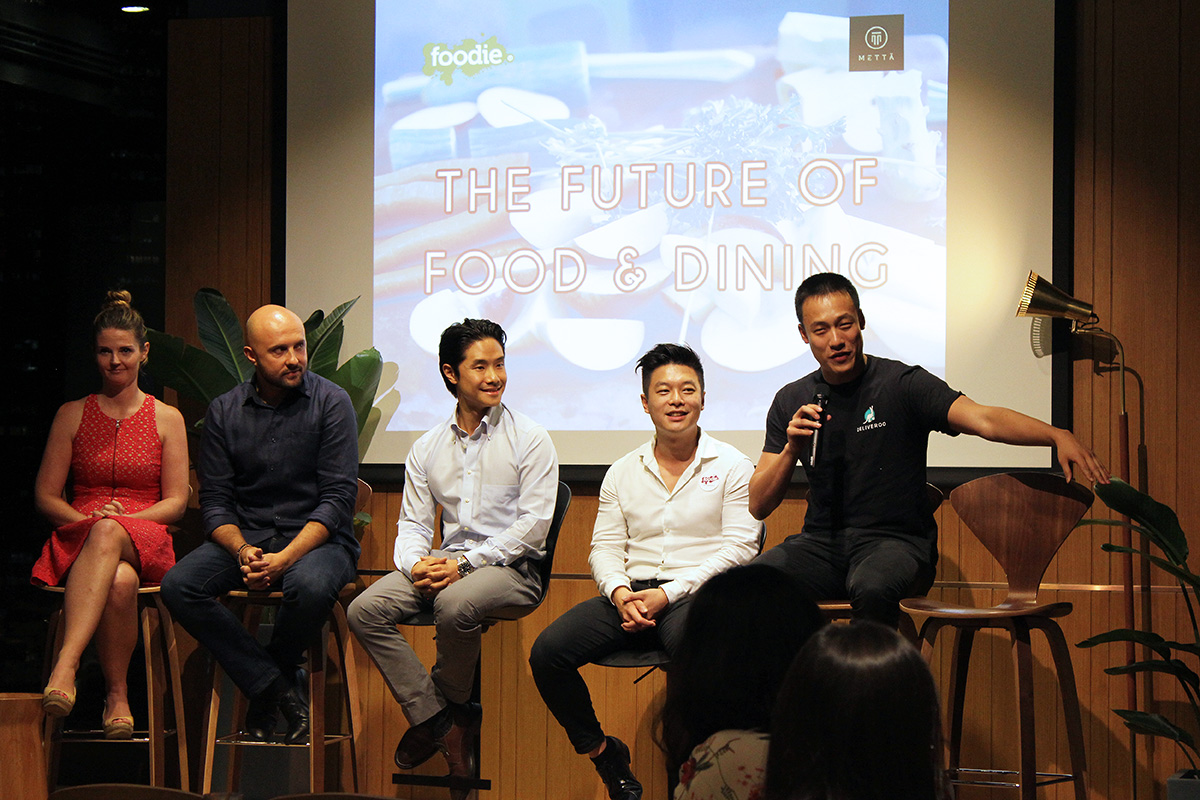 For the second part of the talk, Chef Sanuy brought up the concept of breaking boundaries when cooking. We now have the technology and knowledge that provides us with a much deeper understanding of food and how it all works, therefore we must aim to understand their origins and not let ourselves be limited by a single cuisine and its traditions. What he meant was not exactly fusion, but just to be more open-minded in the interpretation of dishes and merging of the past and present. Alicia also mentioned that it is quite hard to know what will work in the unique market of Hong Kong with some popular restaurants closing unexpectedly. She also mentioned the hope to see more of the zero waste concept expanding and mentioned such futuristic developments that are happening such as edible wrappers made from natural food particles and genetically engineered meat. She described the current trends in the market for pop-ups, tasting menus or niche cuisine.

On the use of technology, Brian Mak mentioned that what they were doing in the industry is not exactly the innovation of the concept, but the delivery method. In this somewhat fragmented market of restaurants going digital and compiling all the information in one place is the best way forward as the most commonly used object in our daily lives are our smartphones, and online platforms and mobile apps like such are sure to gain attention in the market.

Wesley Tang expressed that many people are used to making reservations at restaurants by going to the physical location, or over the phone-- so they're actually competing with offline. It is now with the advance of technology that brings more people to using online tools that can aid them in doing simple things such as making reservations, that create an increased demand and possibility for concepts like Chope. 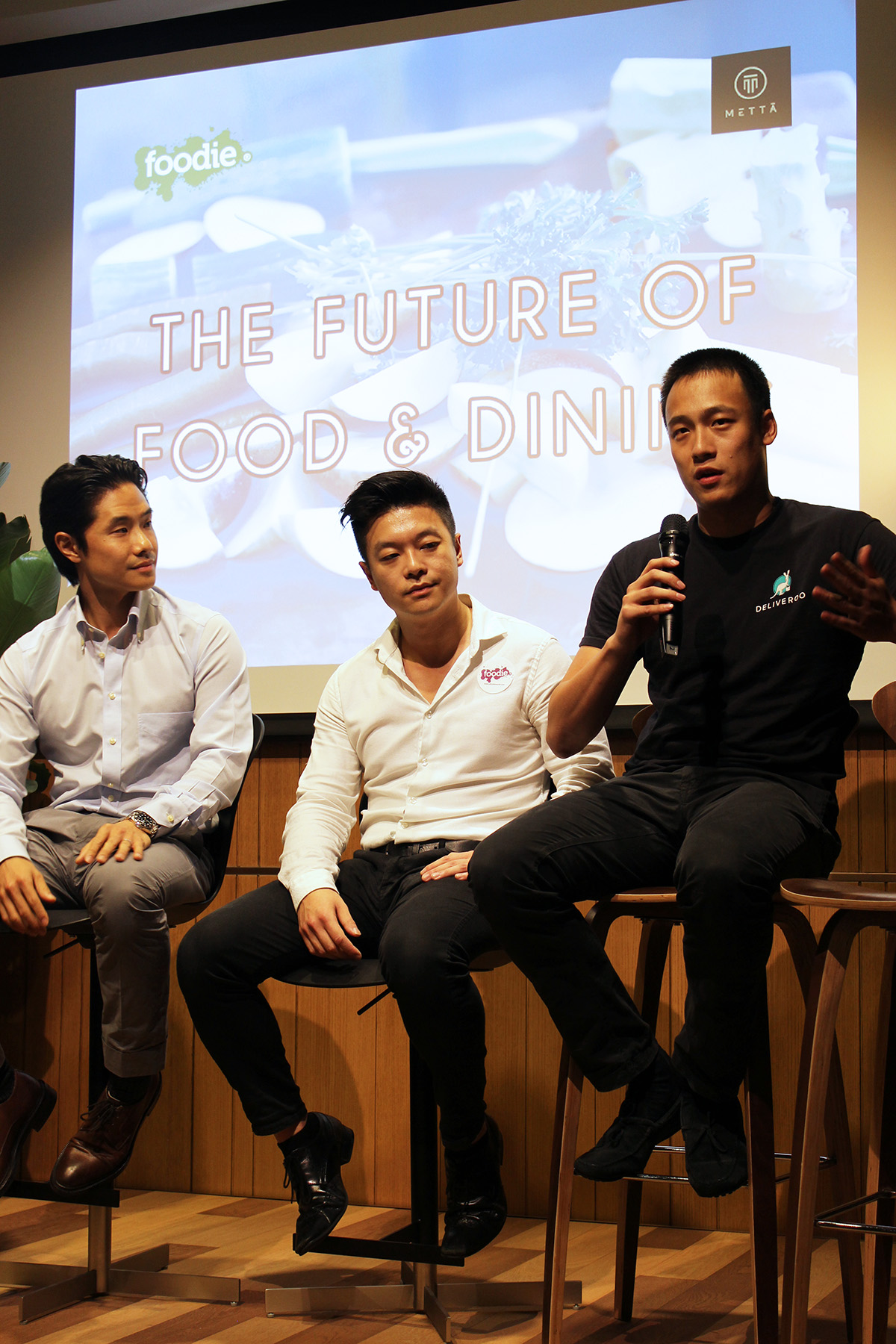 On the habits of the consumers Brian Lo observed that there are three obvious trends:

Chef Sanuy also commented on the delivery aspect, and reminded us as consumers to be smart when ordering delivery. For example, you're craving something crispy and deep-fried, but you know that crispy food and steam that results from a hot item being boxed, would you still order it and would you alter your expectations because of these details? Chef Sanuy also mentioned that there is always room for everything, and it would be interesting for restaurants to come up with a special line of delivery-friendly food.

After a fun-filled night with great insights from the industry's experts, everyone had a great time both listening and participating in the discussion, especially with the opportunity to mingle and converse with the speakers, as well as try out some of Katharina's roasted mealworms. Without a doubt, the event was a success, leaving us all with food for thought.

For more great Foodie events, sign up to Foodie Club on www.afoodieworld.com

On a see-food diet.