Dining on Mealworms and Flies

First thoughts on insects: ew, yuck, what the heck. First thoughts on having insects in your regular meals: no, thank you (are you crazy?). Okay, I admit it, neither toasted flies and mealworms nor deep-fried crickets and beetles sounds very gourmet. However, once you get over the fact that they're insects, and view them as a normal food source, they really aren't that bad. In fact, a lot of good comes from entomophagy.

Entomophagy is the practice of eating insects. Now, while many of you are probably thinking that this is some kind of novelty, or a culture only in extremely exotic places, it is actually a sustainable protein alternative. Now to this point you might be thinking, who is this entomophagy advocate? Actually, I'm not. I just find the concept of entomophagy interesting, and the idea of it becoming a sustainable lifestyle in the future as a solution for food shortages is why we should all pay attention to it.

Entomophagy has the following benefits:

On an individual level, entomophagy is good for physical health. Insects like black soldier flies and locusts have a high level of protein which is comparable to meat, and can also satisfy our daily needs for potassium, calcium, zinc, and iron. Also, insects are taxonomically distant from humans, and can reduce the chances of zoonotic diseases.

On a community level, adopting the lifestyle of entomophagy can provide livelihood for the poor. Insect gathering and rearing is extremely easy, and requires low capital expenditure or technology. It can open the door to more job opportunities for many people in less affluent communities.

On a global scale, insects, having one of the largest biomass, can be the solution to achieving food security and sustainability. With the quick-growing population and rate of urbanisation, there has been a great increase in the demand for food, especially animal proteins. It is estimated that there will be over 9 billion people to feed by 2030. Faced with current issues of environmental pollution, intensive production, land degradation, as well as vast amounts of wastage, resources-- especially food-- will run out very soon. Insects have a fast growth and reproduction rate, as well as a low environmental footprint. One of the greatest problems of rearing livestock is that they take up a lot of the food sources on the earth (when in fact the problem of starvation prevails in certain parts of the world), require a lot of land, and emit a multitude of greenhouse gases, such as methane, which contributes to climate change. Given the same amount of feed, a much greater amount of insects can be produced as opposed to other animal proteins. The fact that insects contain the same amount of nutrients, if not more, shows that it is a good alternative to meat. 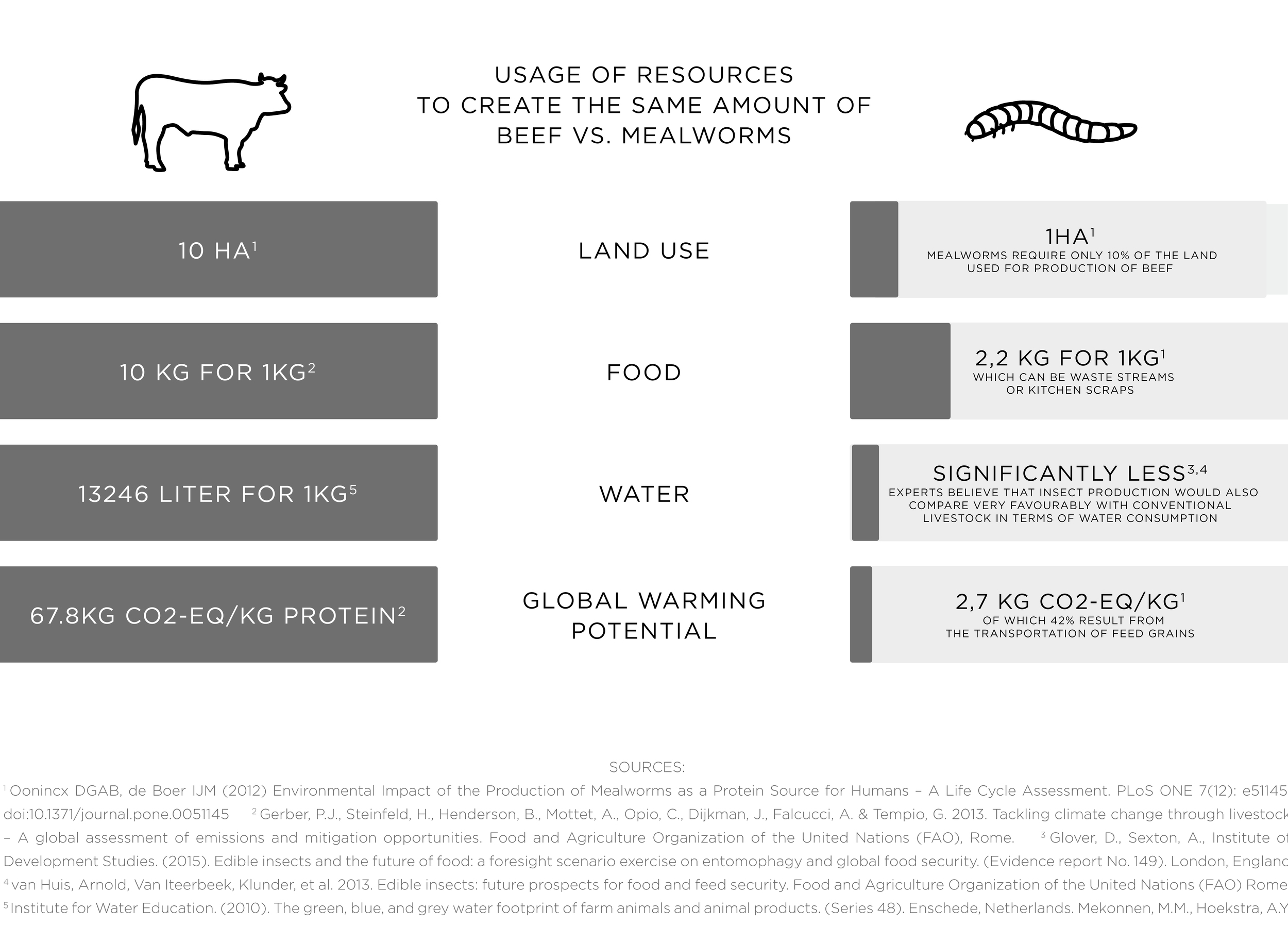 Also, insects are highly capable of feed conversion. Many insects feed and survive on waste, which means that the rearing process for insects is less complex, as there is not really a need to source special feed for them. Think of this as a good way to reduce the amount of waste on the planet! Not only do insects provide the possibility of securing a food source for the generations to come, it also complies with the three core values of sustainability, which are: satisfying the economic, social, and environmental needs of the present and future, without compromising the opportunities of the future generations.

Most people find entomophagy unacceptable as their initial reaction to bugs is disgust. However, there are also people who disagree with the idea of consuming insects based on ethical reasons. They believe that raising insects for consumption is devaluing their life, and dismissing their ecological value. However, isn't that the same thing as keeping livestock for consumption? Moreover, some people refer to the practice of eating insects as being uncivilised, primitive, or atavistic.

Interestingly, all of us has, in fact, consumed insects at one point or another. According to the Defect Levels Handbook issued by the US Food and Drug Administration, there are insects in many of the foods that we consume. Maggots can be found in canned fruit or fruit juices, insect fragments can be found in ground spices, beetle eggs or sacs are often attached to vegetables... the list goes on and on. The point is, we've all had insects before, whether we knew that it was there or not, and it never tasted any different.

I've personally had insects on two occasions. The first time was in Beijing, where I had deep-fried scorpions from a hawker stall on a packed and energetic street. Imagination suggests that scorpions might taste like super venom, that a bite of it will be a burst of acidity that leads us to immediate death. On the contrary, it tastes nothing but normal. In fact, its flavour and texture is alike to that of eating deep-fried soft-shell crabs. The outer shell is quite crispy and thin, and the middle is kind of mushy and gritty. The tail of the scorpion, in my opinion, is the best part. It is extremely crispy, basically like any of the deep-fried packet snacks that you might reach for to nibble on when you're hungry.

The second time I had insects was at a recent event, where I got to meet Katharina Unger, the founder of Livin Farms. Ms Unger enjoys eating insects, and her work at Livin Farms is developing the world's first ever desktop hive to raise insects for consumption. She prepared snacks for the event, using mainly oats, apricots, and roasted mealworms, and rolling them into spherical shapes. From the snacks, you could hardly taste them, which means that there is nothing weird-tasting about mealworms at all. I also tried some roasted mealworms straight from the container, and they reminded me vaguely of toasted sesame seeds, but a lot more crunchy. 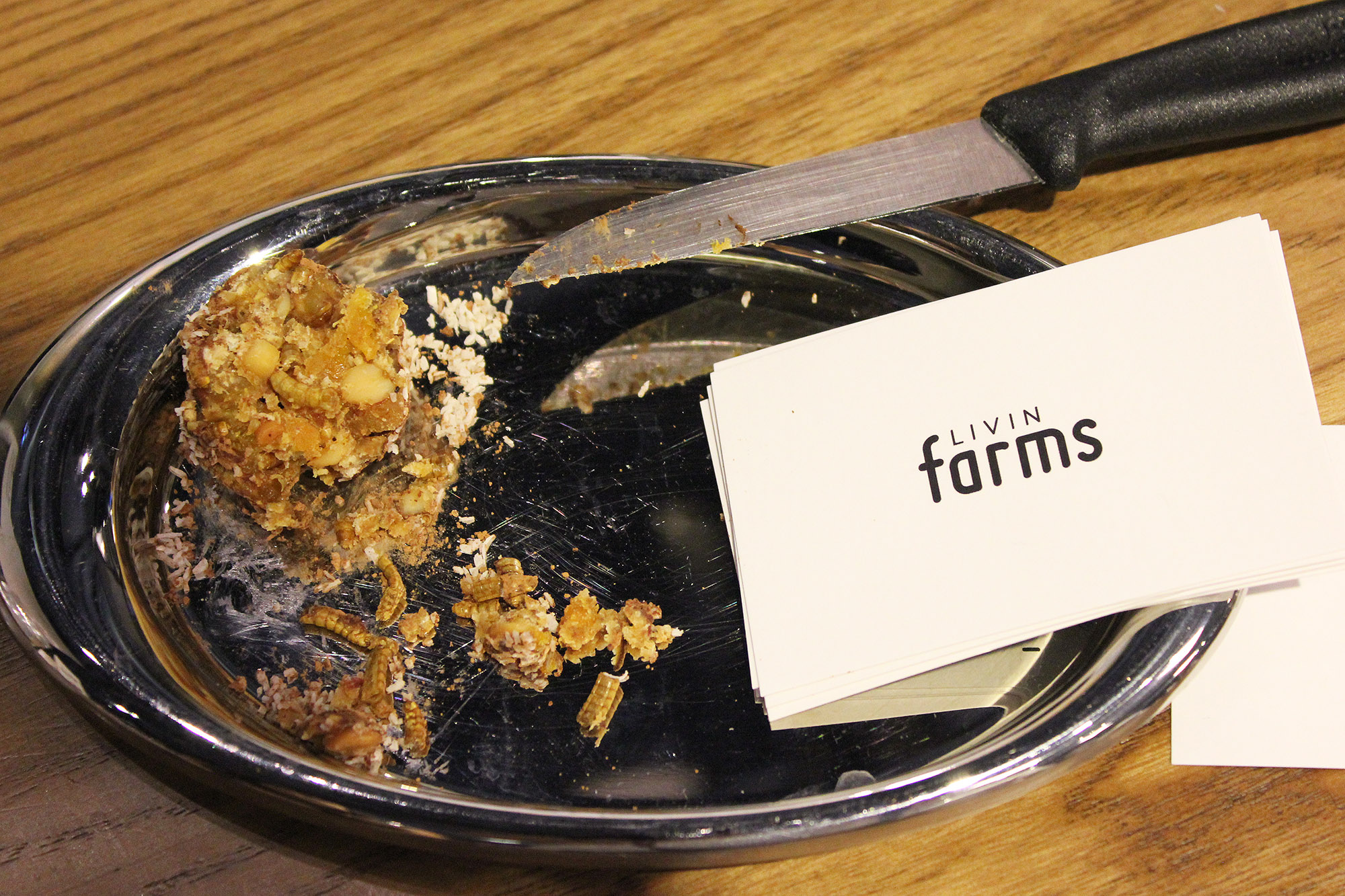 Snacks made with oats, apricots, and toasted mealworms.

As stated by the United Nations Food and Agriculture Organisation, there are more than 1,900 edible insect species on earth.  The most commonly consumed insects are beetles, locusts, flies, ants, grasshoppers and mealworms. These do sound quite daunting, as it is not what we are used to seeing on the plate. However, I think that a good way to slowly shift the world's stigma against consuming insects is to begin with the incremental step of switching out basic ingredients. For example, an alternative to using regular flour when baking, could be cricket flour, which is essentially processed crickets that have previously been boiled and dehydrated.

Well, what are you waiting for? Hop to it!

On a see-food diet.