Sashimi has never been this hot!

GOGYO, ifc mall’s resident ramen gastropub and brainchild of famed “Ramen King” Shigemi Kawahara (founder of Ippudo), has released its Cool Summer Seafood Feast, a tribute to summertime flavours, the ocean and – the main reason for our visit – seafood. From sashimi to tsukemen, the new menu bursts with natural flavours and creativity, so if lobster, tuna and uni make you hot under the collar, grab your sunblock, because it’s about to get even hotter around here. 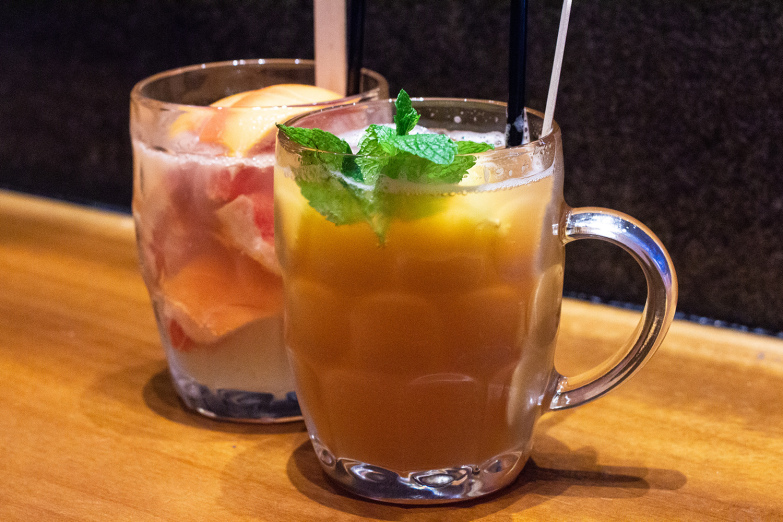 The summer menu introduces four fresh cocktails and mocktails too. Trendy as ever, GOGYO follows the Japanese shift towards freezing fruits before mixing them into cocktails, something that isn’t quite as popular in Hong Kong, but after trying these tipples, we certainly wish it was (take note, restaurant owners). This technique not only keeps the drinks as cool as an especially cool cucumber, but, with no ice involved, they won’t become more and more diluted as time passes, leaving you to indulge slowly. We tried the pineapple oolong tea ($68) and grapefruit highball ($88), which must’ve come with close to a whole grapefruit inside – absolutely delicious. 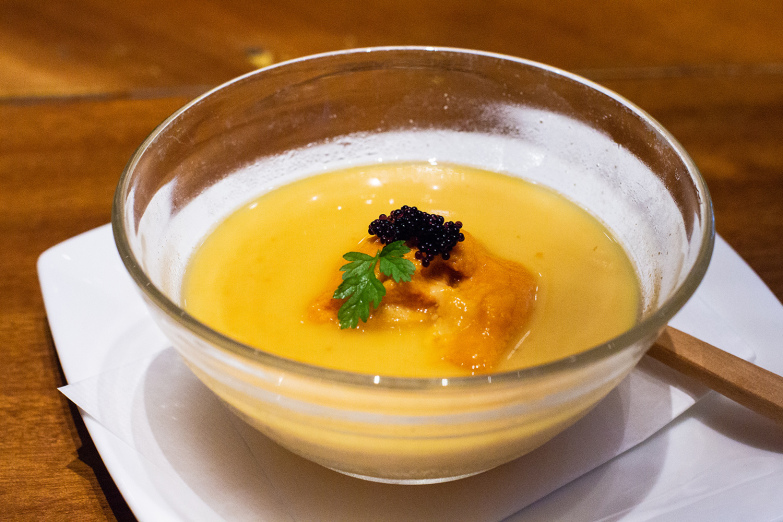 The first dish had a unique twist – it was a savoury pudding. At first, I could’ve sworn they were bringing me crème caramel as a starter, but it turned out to be the cool uni pudding ($98). Yes, that’s right, sea urchin pudding. Despite my knowledge of what it was, the first bite was still a surprise – briny, fresh and creamy. The flavour of the uni shone through, and the black tobiko that garnished the pudding added a touch more texture. We’re glad we tried it, but it didn’t have that wow factor we were seeking. If uni is your thing, though, and you want to try its distinct flavour in an interesting format, stop pudding yourself and head on down for this limited-time offer. 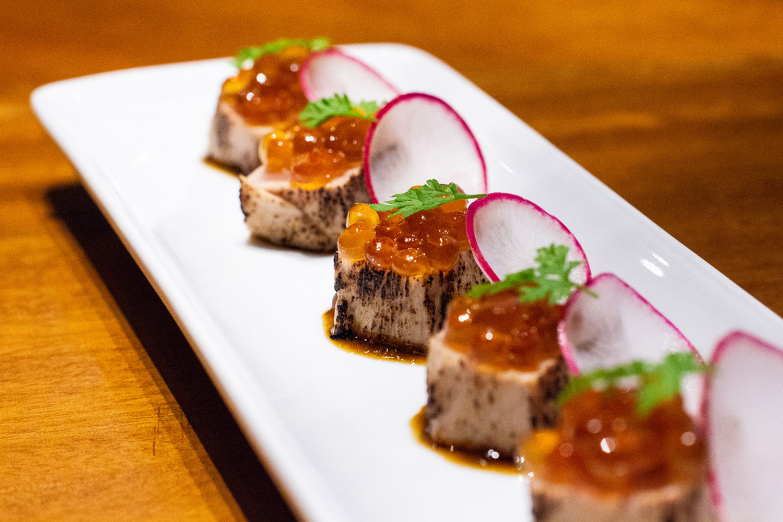 Our next dish was one of the stars of the day, the aburi toro cubes ($178). Toro (belly) is one of the most valued parts of a tuna, known for its melt-in-the-mouth texture and rich flavour. GOGYO gives it a unique twist whilst still showcasing the beauty of its natural flavour (because, let’s be honest, tuna needs no cover-ups). The chefs lightly sear the outside of the toro cubes, leaving the fish raw on the inside, but giving a slightly different texture and flavour on the outer layer. Each distinctive bite-sized cube is complemented by salmon roe and a light seaweed-based sauce. This was an absolutely mouth-watering combination, and one I would definitely go back for. 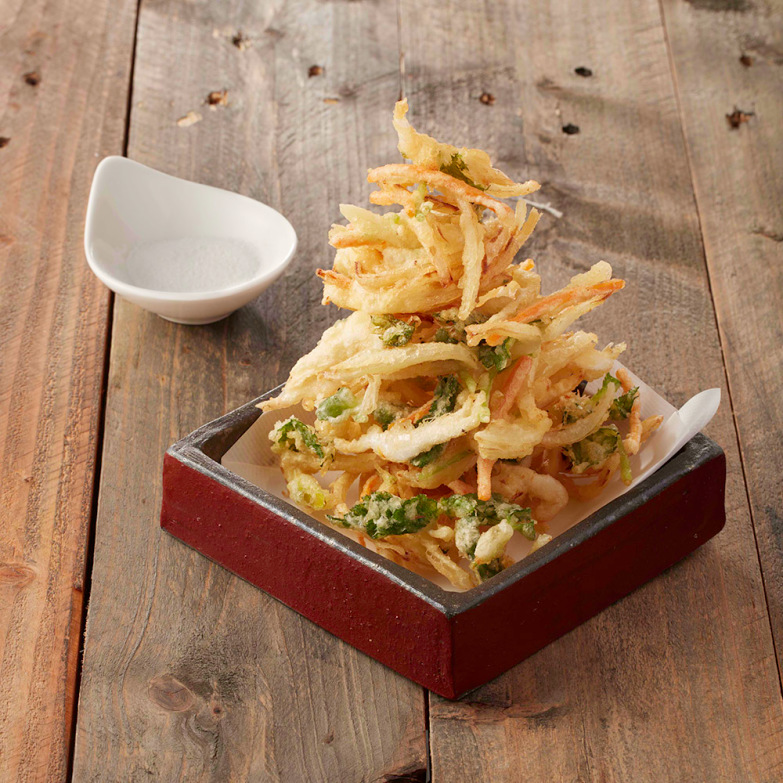 The next dish was a tasty tower of tempura. The white shrimp and mitsuba tempura tornado ($78) is considered tsumami (something to snack on whilst you drink before the main meal) and comes in the form of two tempura bricks (because it all sticks together when fried), which were slightly harder to eat elegantly than would have been ideal, but the flavour was there and it was certainly moreish (Thank God elegance wasn’t required on the day). 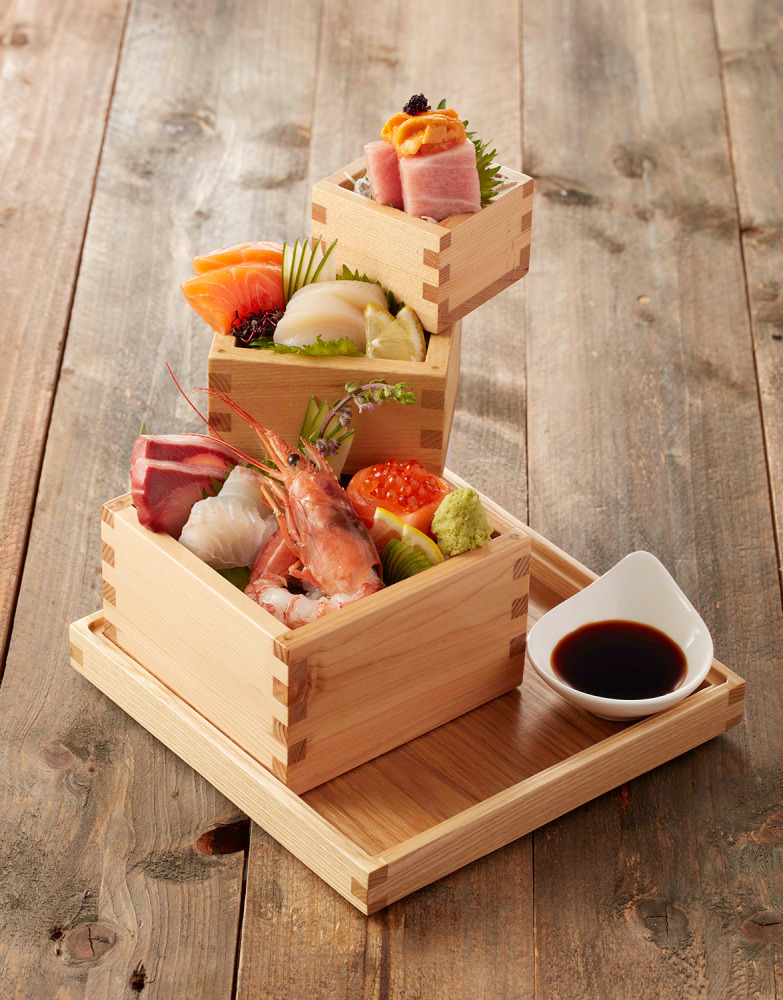 This was followed by the much-anticipated “freshly built” sashimi skyscraper ($268). Presented on a wooden scaffold with an array of fresh sashimi pieces, this was a pure delight, featuring salmon, scallop, hamachi (yellowtail), red snapper, red shrimp, toro, uni, black tobiko and salmon roe. The presentation itself was a showstopper, making the already-anticipated dish seem all the more extravagant, and there was not a piece of food on the plate that wasn’t devoured. Although the idea of serving sashimi as a tribute to summer isn’t unique in our books, the sheer variety allowed for an interesting combination and comparison of flavours. 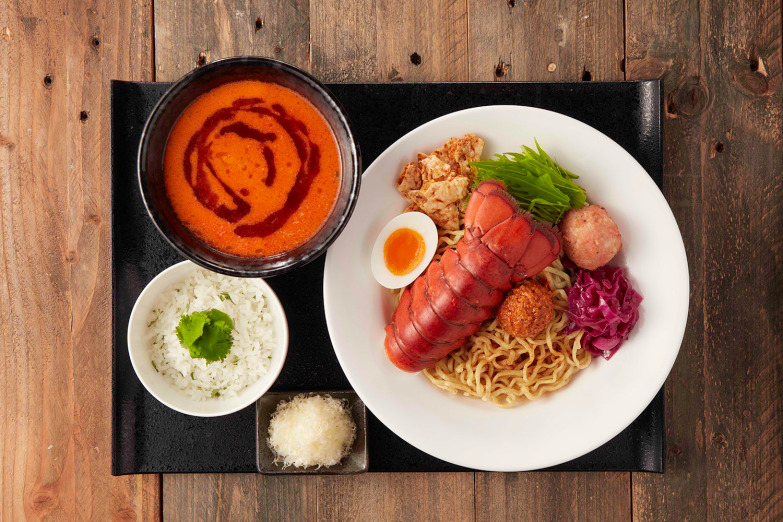 The last dish we demolished that day was the lobster tsukemen ($238). Although the sashimi skyscraper and aburi toro cubes had so far won our hearts, this was the real star of the show. Considering GOGYO was founded by Shigemi Kagahara, we had high expectations for the tsukemen. Topped with a slow-cooked whole lobster tail, a delicious sakura shrimp ball and a soft-boiled egg, the perfectly cooked ramen was something to behold. The rich tonkotsu-based broth in the accompanying bowl was similarly enticing. It’s not often I have the internal conflict of contemplating savouring the moment and just attacking the bowl with all the primal desire that the meal has swelled up in me, but this did make me question my morals for eating something so precious. When the ramen has finally been sufficiently savoured, the tray also has a bowl of coriander rice in which to pour your broth, for a delicious shrimp-flavoured risotto type of affair – something I could definitely get used to.

As a whole, we enjoyed each dish on GOGYO’s latest menu. There were, however, a few dishes that truly stood out and would definitely warrant a return visit. The aburi toro cubes were heavenly – the idea of searing the outside of the tuna and complementing it with salmon roe and seaweed sauce made this dish absolutely mouth-watering. The sashimi skyscraper was aesthetically creative, with an interesting, generous selection of fresh, top-notch sashimi. And, as would be expected, the Ramen King did not let us down, with GOGYO’s lobster tsukemen the absolute star of the show. If tsukemen is your thing, you should go-go to GOGYO right away.

South African born, living in the Big Dim Sum since 2016

Top 5 Thanksgiving Treats and Feasts of 2020