A poetic, alternative review to this Wanchai pasta palace – bust a move!

Waiters in nice threads? Designer lighting? Meh. If it’s delicious, you’ll eat it from your helmet with a bayonet in the dirt. Your wife disagrees. In a tone suited to her primary-level students and those of like maturity, she explains that nice threads matter, designer lighting matters, bayonets must have matching forks, all dirt bad. So you go to Pici, Italian.

Large windows prop open just as they do in forest-fire lookout cabins and you like it immediately. Romantic couples queue outside. You can sit at the bar overlooking the fires of the kitchen or by the windows overlooking the fires without. Beatles, Van Morrison, Al Jarreau, the playlist is perfect, and better yet, the volume hasn’t been set by a teenager. The embers of romance begin to glow. A bottle of rosé in a champagne bucket (the one item, more so than all others, vital to a civilised life) makes them glow brighter.

A burrata – whose lustful connotations do not escape you – is served. The embers crackle. You love the garland of Parma ham, excellent bread and rocket in a light vinaigrette. Jolts of joy from the occasional cracked peppercorn.

You feel benevolence for the waitresses who are kind, attentive and, truth be told, wear nice threads. Yes, yes, you’re inconsistent, but a foolish consistency is the hobgoblin of little minds. Your mind isn’t little. Thus you explain to your wife, who smiles cryptically.

Pinkies touching, the two of you watch the chefs – bent in veneration – make pasta. Pinkies entwine.

Orecchiette in a cream sauce with sausage. Tagliolini in a cream sauce with truffle oil and truffles. Tagliatelle in butter with porcini mushrooms. All al dente, which is no mean feat with fresh pasta. Yes, tasty indeed, but all three are roughly interchangeable. When you go again, you’ll order at least one with ragu. 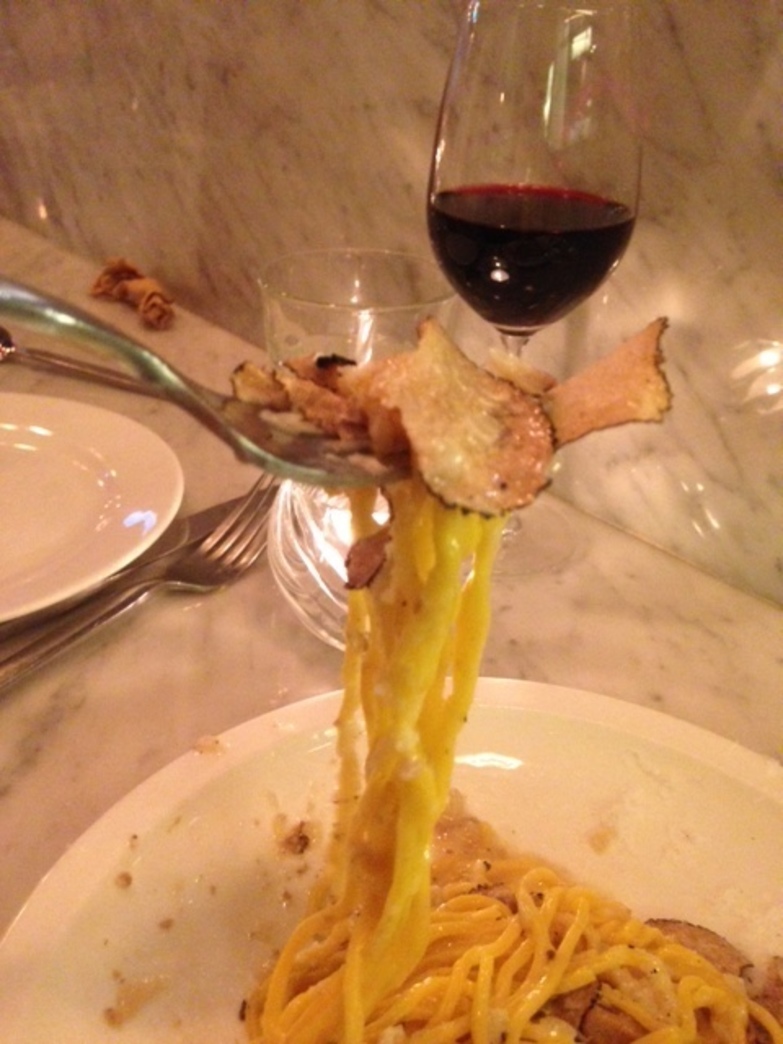 Pici, bust a move! Your special our night was spinach ravioli. Tasty, no doubt, but meek. Stuff your ravioli with lamb confit and serve with preserved lemon butter. Go, chestnut pasta (noblest pasta of all). Go, goose ragu (which would be life altering with chestnut pappardelle), and then anoint the dish with cracklings from the beast. How about squid-ink spaghetti (or fusilli lunghi!) in saffron sauce? How about a bagna càuda sauce over semolina orecchiette with a few obese shrimp, the peels charred and sweet from a hellish pan? If you insist on panna cotta, please, five per cent less gelatin in the cream, five per cent less sugar in the coulis.

Cream comes from cows and cows eat plants, but that doesn’t make cream a plant. Add vegetables to your menu (one salad is insufficient) because it’s... well, it should be obvious.

Departing this delectable albeit monotone meal, you slip your arm around your wife’s waist. Those peering out from within the forest-fire lookout cabin see smoke.