Growing up watching numerous American dramas on TV, I have always dreamed of travelling to the USA. This dream was realised few years ago, but here in Hong Kong, I decided to check out Alvy’s, a joint in Kennedy Town styling itself as a NYC bar and restaurant, focusing on the art of New York–style pizza and craft beer made by local brand Young Master Brewery. 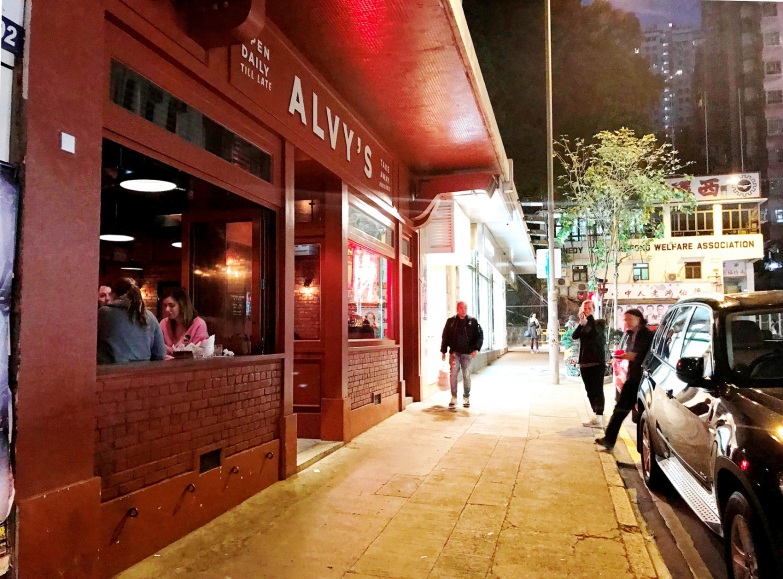 Arriving at Alvy’s at 7pm on a Friday night, a push on the door brought me back to a NYC bar right away – the scene was set in earthy wooden tones with chequered floors, amber lighting and 90s rock playing in the background. 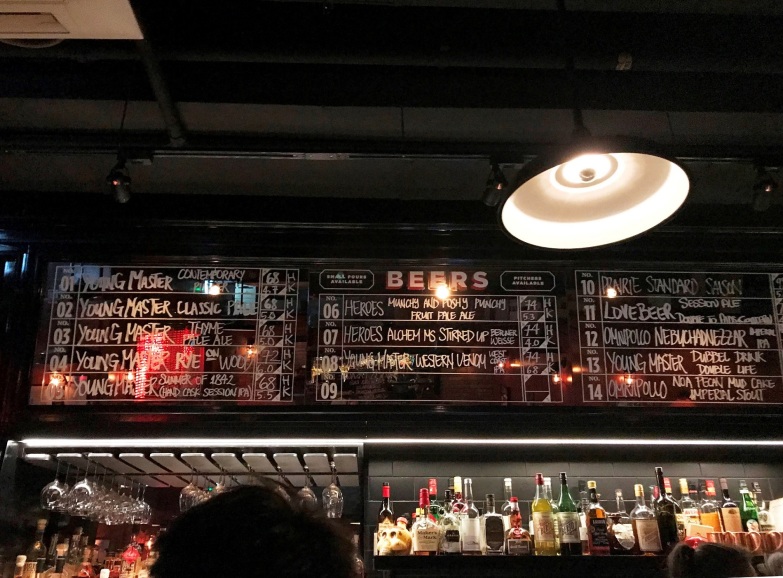 First greeting me was a long wooden bar lined with a wall of colourful whisky bottles. Turning right from the bar revealed a spacious dining area with wooden tables. The decor was unassuming but laid-back and inviting.

My friends had arrived a bit earlier to catch the happy hour deal – a half-price pizza upon ordering a 1.8L beer. Since pizza/hot wings/beer is my forever-favourite combo to wind down an exhausting week, there was no doubt we would start our night with some Summer of 1842 beer, a Bak Gwei pizza, an A La Vodka pizza, Yu Kwen Yick hot wings and an order of meatballs. 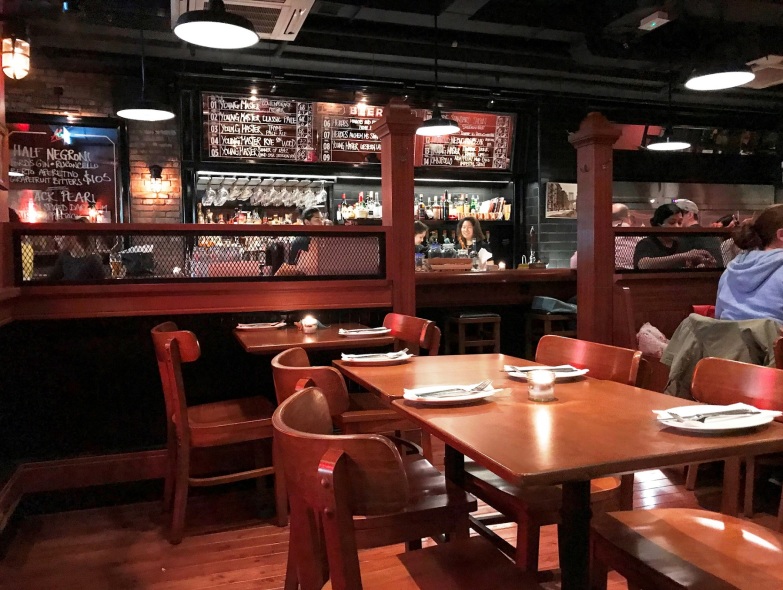 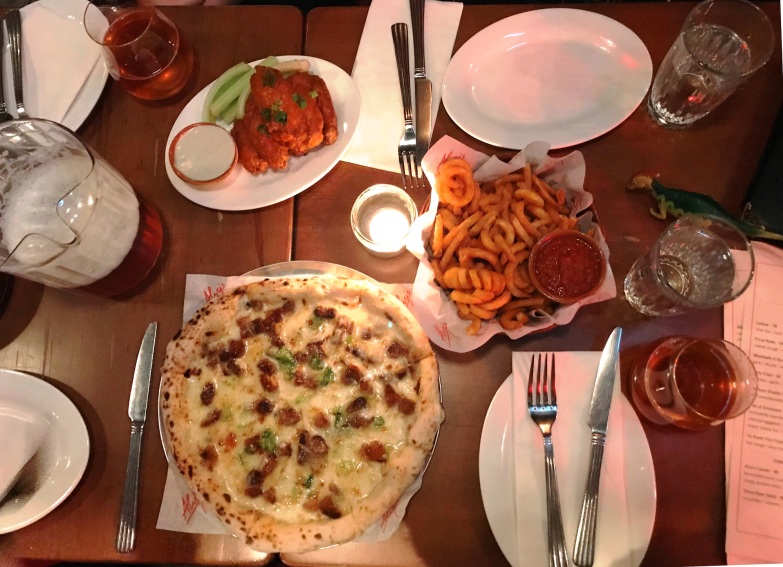 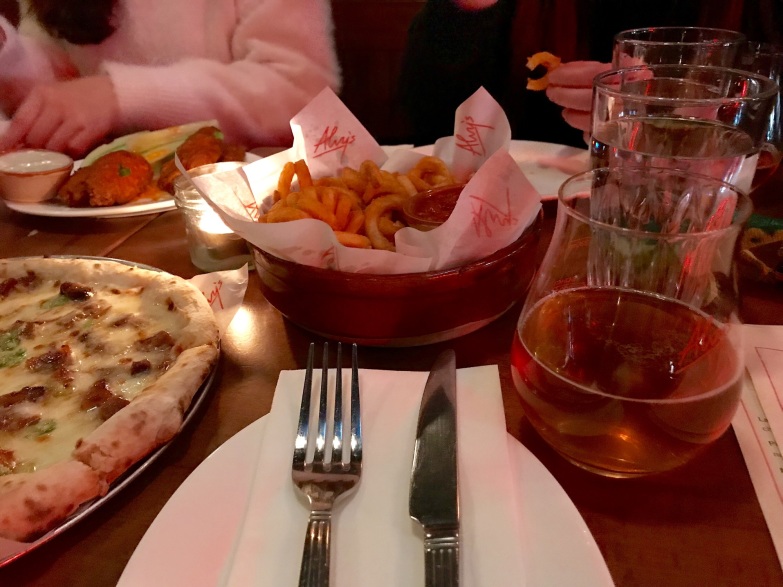 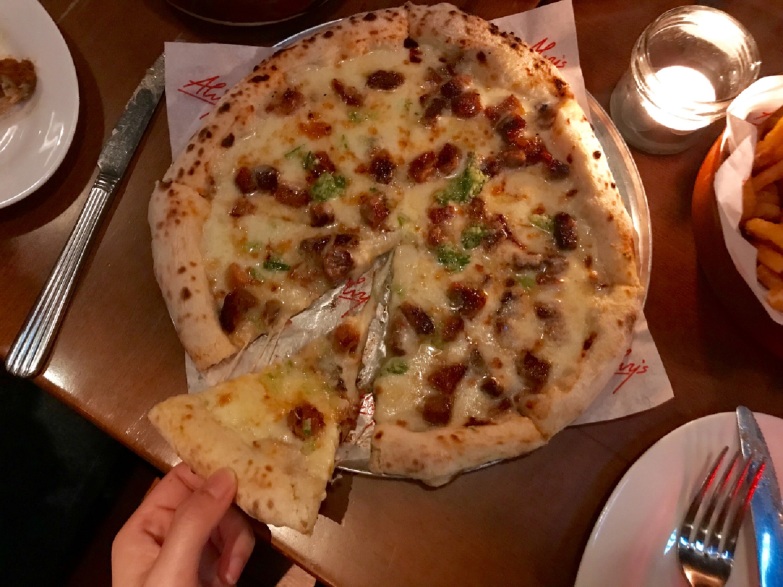 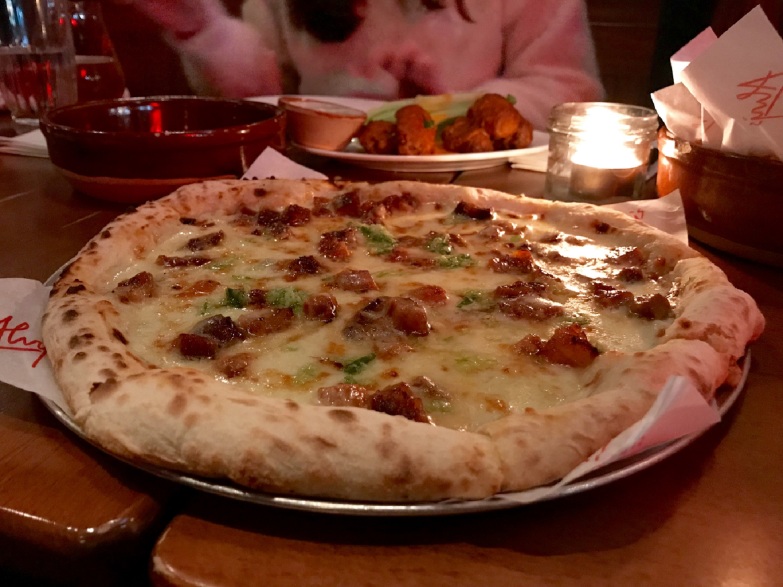 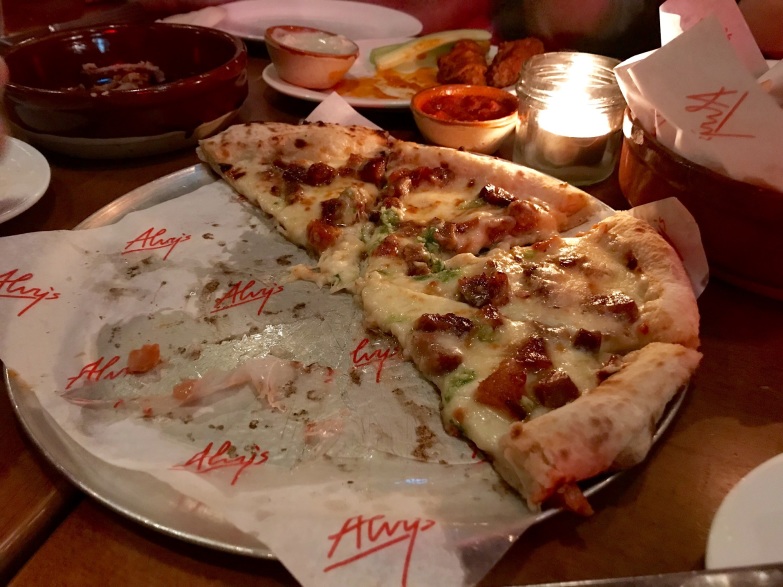 This Summer of 1842 brewed by Young Master Brewery definitely took my taste buds to the glory of craft beer, showcasing intense hop flavours intermingled with fruity and floral notes. It tasted more refreshing than bitter – right on point for a Friday girls’ night out.

This authentic New York–style pie was swiftly served to our table just a few minutes after ordering. The base, slathered with béchamel sauce and mozzarella cheese, was super thin, soft and pliable enough to be folded for eating, while the thick yet crisp crust was well charred and blistered. Despite Alvy’s emphasis on making their sourdough base using beer yeast, I was dismayed that the sourdough did not showcase its distinguishing slightly sour and chewy bite.

The toppings of the Bak Gwei were the fusion acid test but fell short of my expectations. Featuring Hong Kong’s acclaimed char siu (BBQ pork) and geung yeong (spring onion and ginger sauce), the pizza failed to provide the expected punchy flavours.

To be qualified as good char siu, the pork should be well roasted to retain a charred and crispy skin glazed with honey, while the meat inside should be succulent and tender. However, Alvy’s char siu was chopped into tiny cubes without any hint of flavour. As for the geung yeong, despite the chunks of spring onion, the taste was bland. 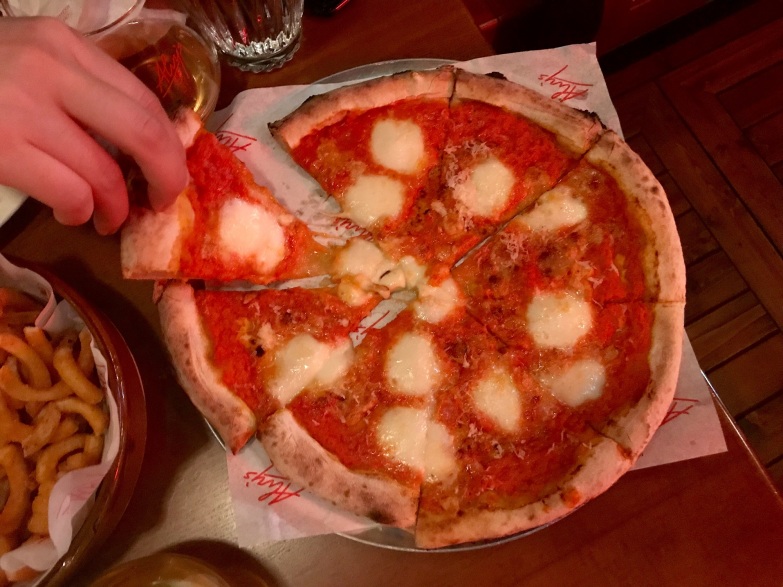 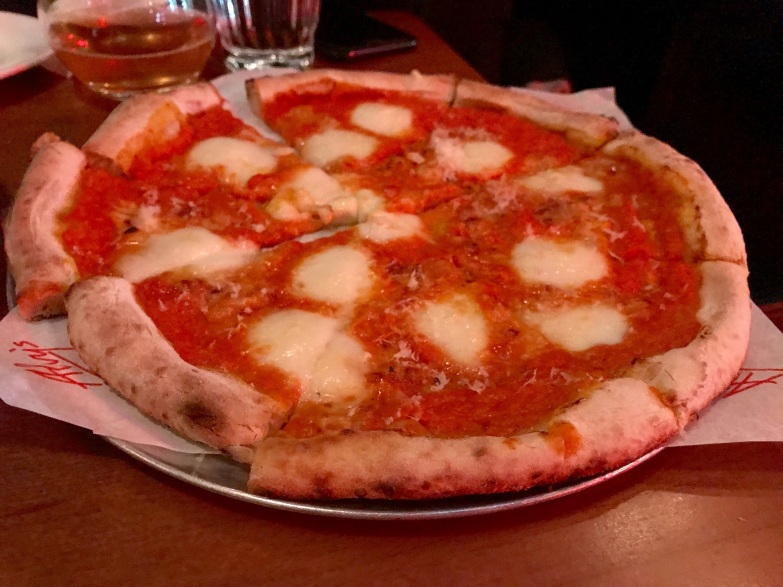 Compared to the previous Bak Gwei, the A La Vodka was more scrumptious, overloaded with bocconcini mozzarella. These springy, savoury nobs contrasted nicely with the tart tomato sauce base, bringing me the dilemma of indulgence versus self-control. Well, as a shameless foodie, I – with no hesitation – opted for indulgence, munching on three slices! 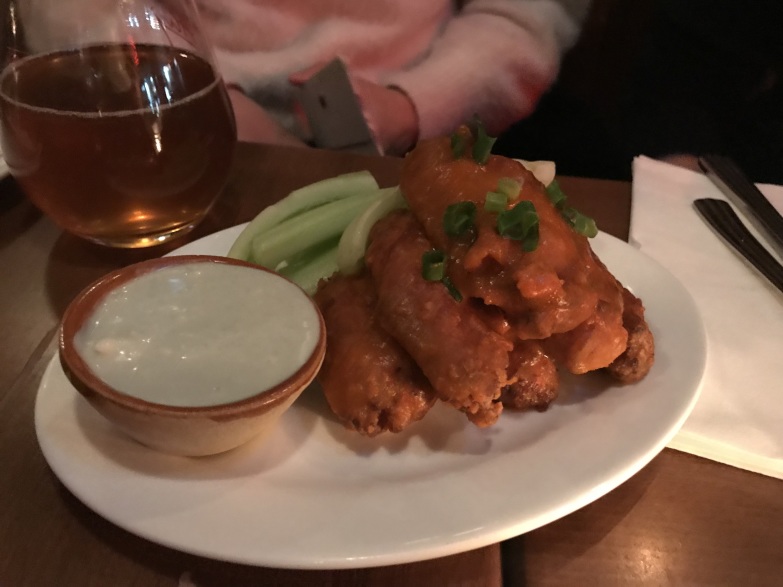 While the pizzas veered between so-so and excellent, our excitement was spurred again with the hot wings. It’s not uncommon to see buffalo wings on menus in Hong Kong, but Alvy’s provided one of the few versions that truly resembled American-style buffalo wings – unbreaded, deep-fried to golden brown and smothered in a blanket of hot sauce. Instead of the usual buffalo sauce, they used Yu Kwen Yick, one of the oldest locally produced chilli sauces around. The chilli sauce was unexpectedly tongue numbing yet flavourful, basically second to none in intensifying the flavour of the crunchy chicken wings. The dish was complemented with celery and blue cheese dressing to counter the heft of heat. 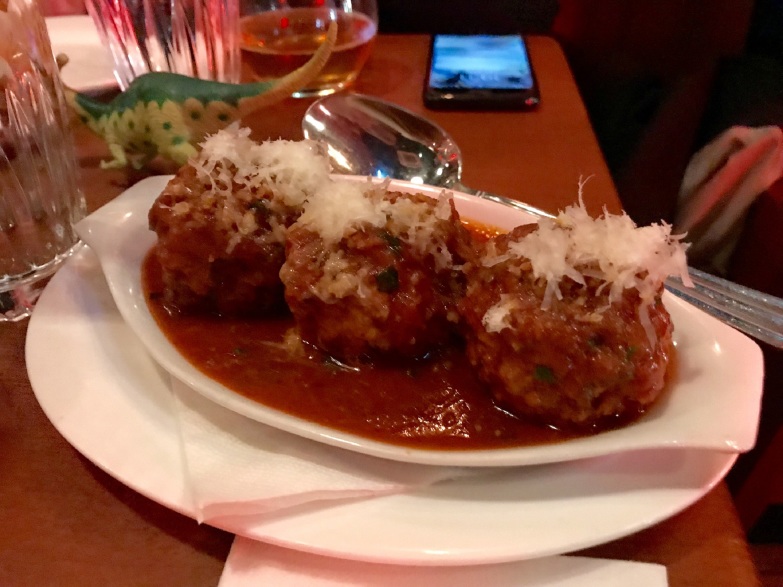 Playing hard at the Italian-American game, Alvy’s meatballs scored a home run for me. These fist-sized balls were seared to a deep, golden brown but remained tender and succulent on the inside. The dish was further accented with “Sunday” sauce and a generous amount of Parmesan cheese. The tart chunks of tomato and salty cheese made the already excellent meatballs the must-order item of the night.

I eat, and therefore I live.