What Kind of Eater Are You?

The 11 different types of eaters

We’re all different, and so are our food habits. Some of us eat to live, while others live to eat. Still others live to photograph their food, try the weirdest dishes or criticise every single aspect of their meals. Vibrant Doors from the UK have decided that there are 11 different types of eaters and have taken a light-hearted look at their different characteristics.

The question is: which one are you?

We all know a Food Thief. They’re that person who goes to a restaurant and doesn’t order anything, citing diet/not being hungry/the fact they ate before. Or maybe they order the wrong thing. Or they “just have a salad”.

But when the food arrives, the envy begins. First you get the sidelong glances, and then comes the stealing. It starts with just the odd fry, but before you know it, they’ve eaten half your onion rings, as well as a large portion of everyone else’s mains. And if you’re in a big group, well, it’s like their own personal tasting menu. 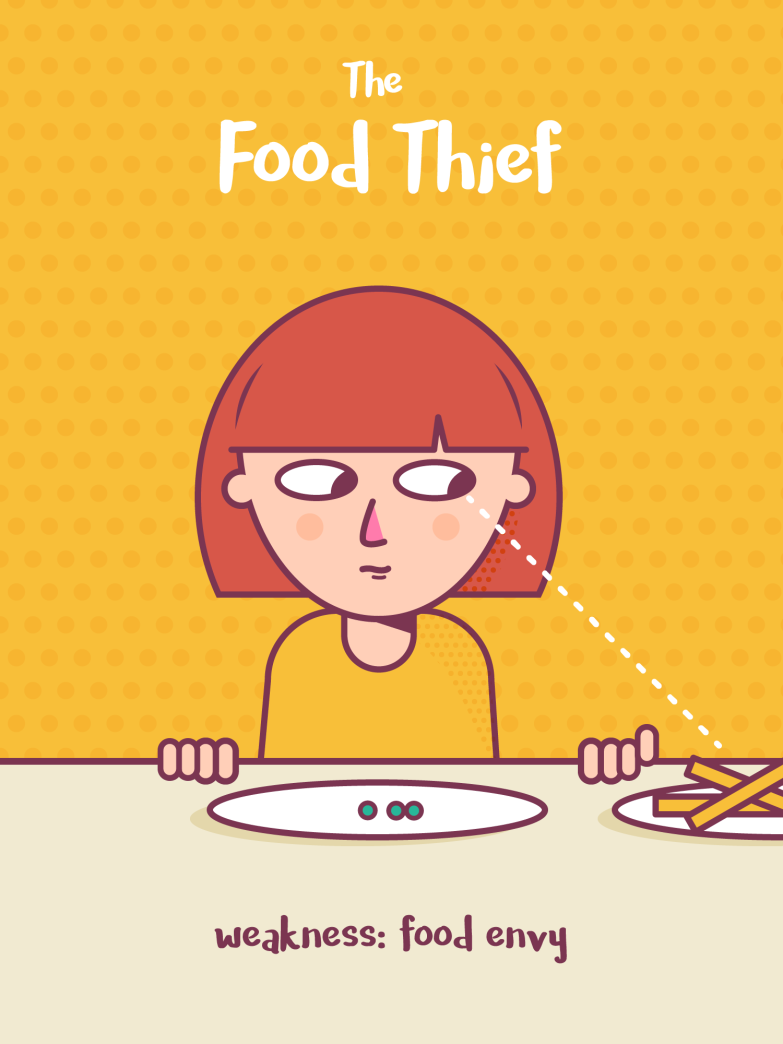 The Healthy Eater is that person who is constantly on the latest healthy trend, whether it’s activated charcoal, avocado or acai. Diets? They’ve tried them all. Keto, vegan, high protein, no carb, juice, paleo, 5-2… the list goes on.

When not demolishing a spirulina, bee-pollen and matcha-tea shake, they can often be found polishing their halo, criticising you as you put away a bacon cheeseburger and milkshake. 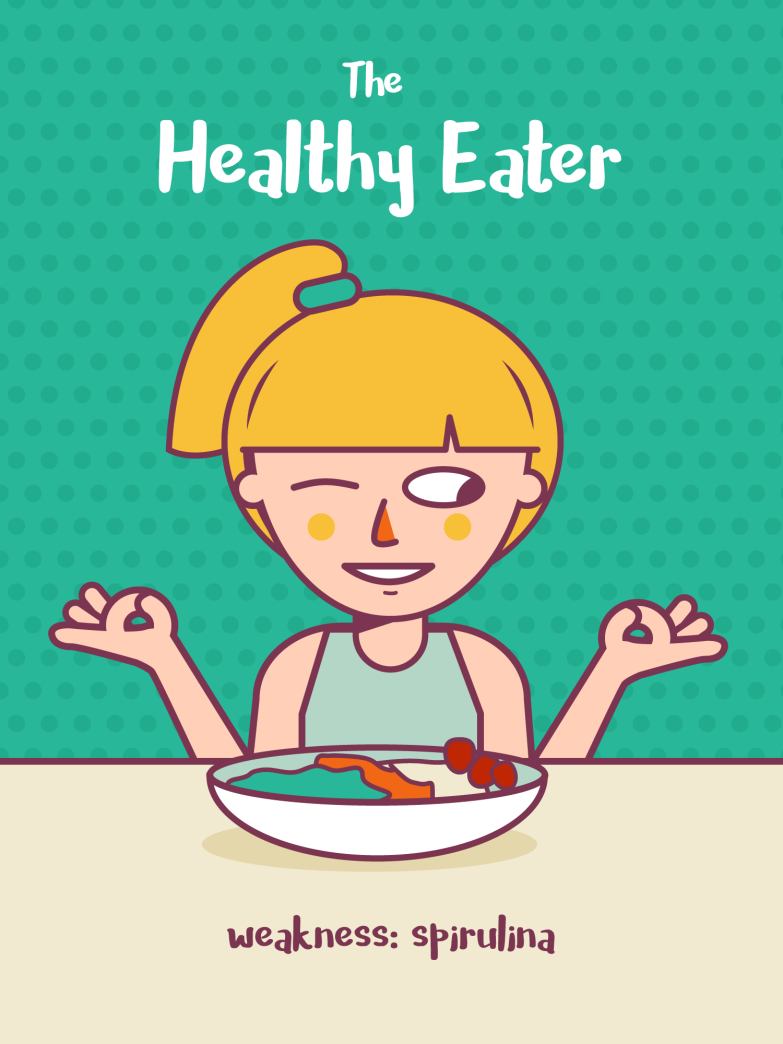 While we all have our messy moments (just try to eat a massive burger without making a bit of a mess, and, let’s face it, we’ve all had the “tomato sauce, meet white top” moment), The Messy Eater takes things to the next level. This one should come with a “splash zone” sign!

They somehow always manage to get food all over the place – crumbs all over the table, sauce down their front, chocolate round their mouth. If asked, they’ll claim they’re “saving it for later”. They also don’t hesitate to use their hands and get stuck in. Messy, but effective. 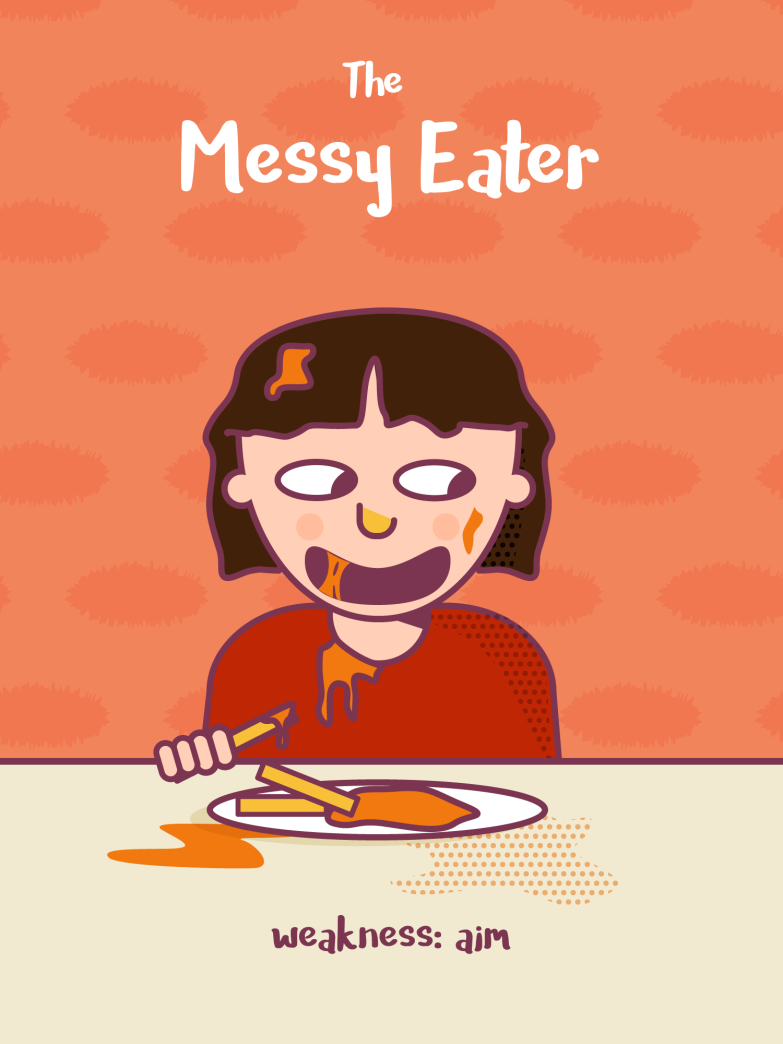 The Midnight Snacker is a slave to their cravings. By the glow of the fridge, they snack on anything that’s available. Ice cream, cheese, chocolate, leftover pizza… you name it. Anything noisy, like crisps, is a no-go, however. Wouldn’t want to wake the rest of the house; they might have to share!

The next morning, of course, they’ll deny everything and swear they have no idea where the missing snacks went. Then they’ll quickly leave the room, dressing-gown pockets rustling with the telltale sound of empty wrappers. 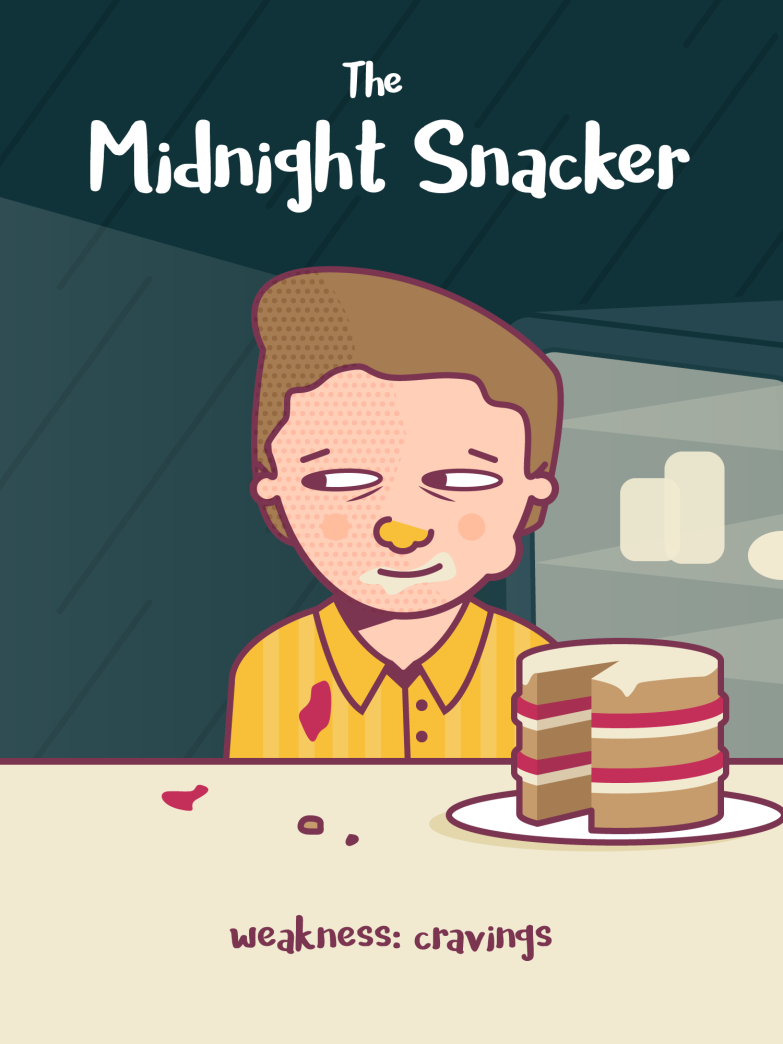 Ah, The Over-Enthusiastic Eater. This is the person who’ll rise to any food-related challenge, whether it’s tasting the hottest chill or taking an all-you-can-eat spot very much at its word. In other words, they’re highly competitive and don’t know their limits.

Eyes are definitely bigger than stomach with The Over-Enthusiastic Eater. And their tolerance for spice is… well, not as high as they’d like to think. But their biggest fear is losing face, so they’ll never admit it – even when said face is bright red and sweating. Don’t offer them milk to calm any spice-related side effects. They’ll just claim they’re fine. And after a couple of days, they will be.

But they’ll never learn their lesson. 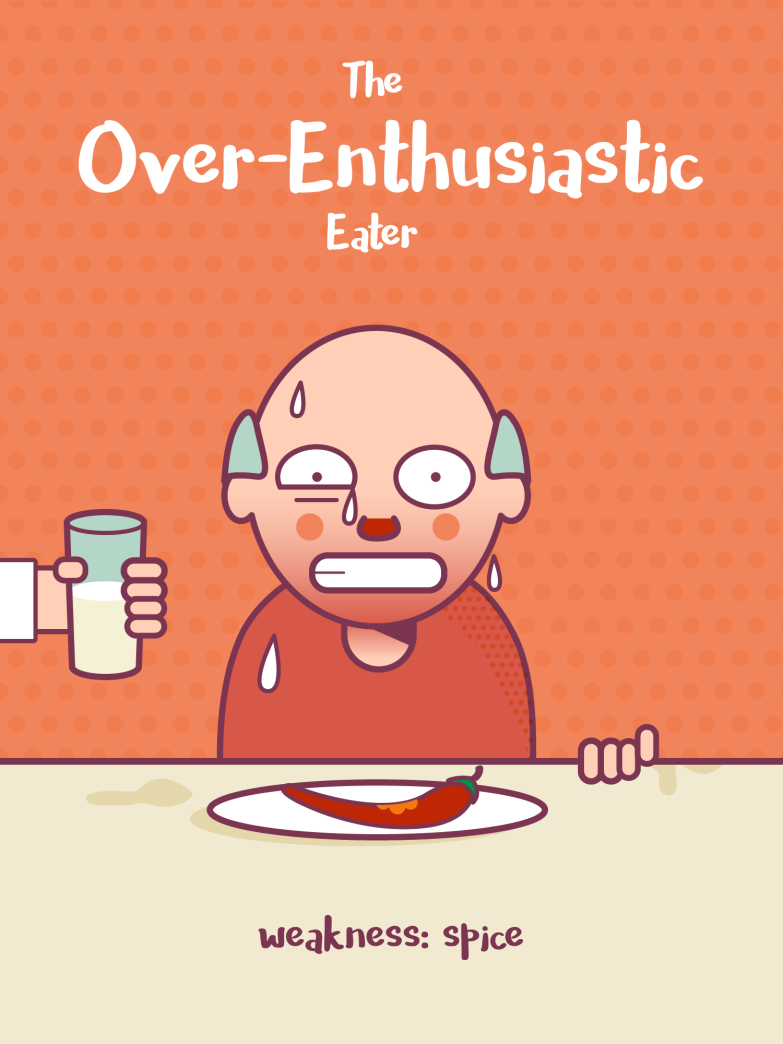 You know that one person you can never please? Perhaps you are that person? Anyway, that’s The Critic. Determined to go through life disappointed in everything, they’ll analyse their meal to the nth degree and pick apart every little detail.

They’ll choose the most extravagant/unusual item on the menu and then claim to love it, even though it’s the worst thing they’ve ever eaten. They’ll also insist on knowing the names and origins of every component of every dish and then return their meal once it arrives because it doesn’t have the right kind of mushroom. And don’t even get them started on the wine… 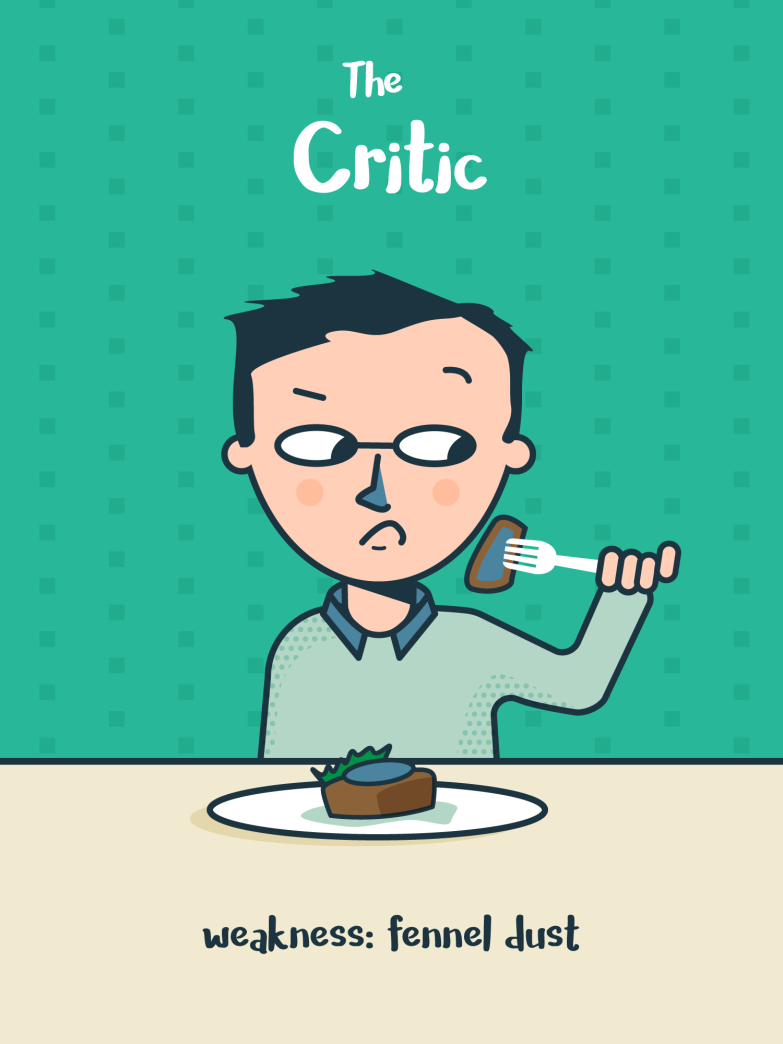 Really, we’ve probably all been The Emotional Eater at some point in our lives. This is the person who hits the fridge, snack cupboard or biscuit tin when things get rough, whether it’s a break-up or a bad day at the office.

They can usually be found crying into the dregs of a tub of Ben & Jerry’s, wrapped in a blanket and surrounded by empty crisp packets and chocolate wrappers (although no food is off limits and they’re on first-name terms with all the local takeaway owners). While eating, they’ll also most likely be watching a film featuring one or more of the following: Julia Roberts, Richard Gere, Tom Hanks, Meg Ryan and Sandra Bullock. 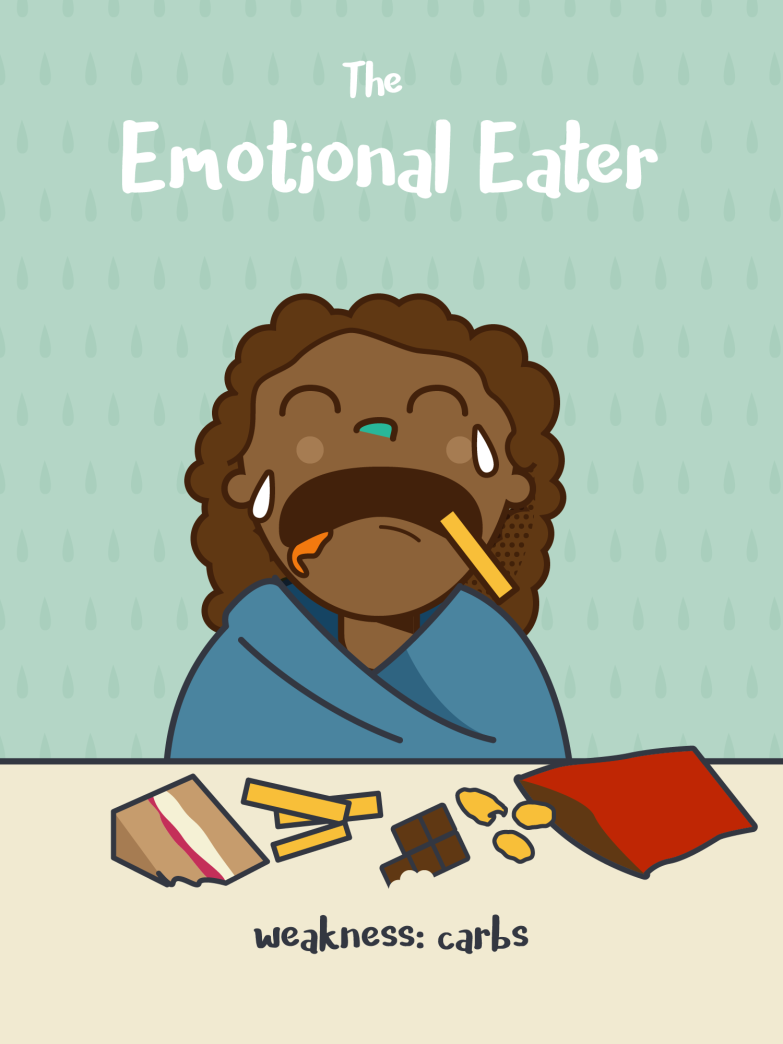 Always on the hunt for beautiful-looking food and drink, less interested in how it actually tastes, that’s The Instagrammer. They’re most likely to be found at the latest pop-up restaurant or hip underground bar or visiting some far-flung destination (paid for by the travel company or hotel, of course, in exchange for promoting them to their 650,000 followers).

They know just the right angles, lighting and filters to use to make their food pics pop, making their followers drool with envy. But be careful: they’re not above stealing your food if they think it looks better than theirs, and don’t expect any dinner conversation – they’re too busy finding just the right hashtag (#foodporn). 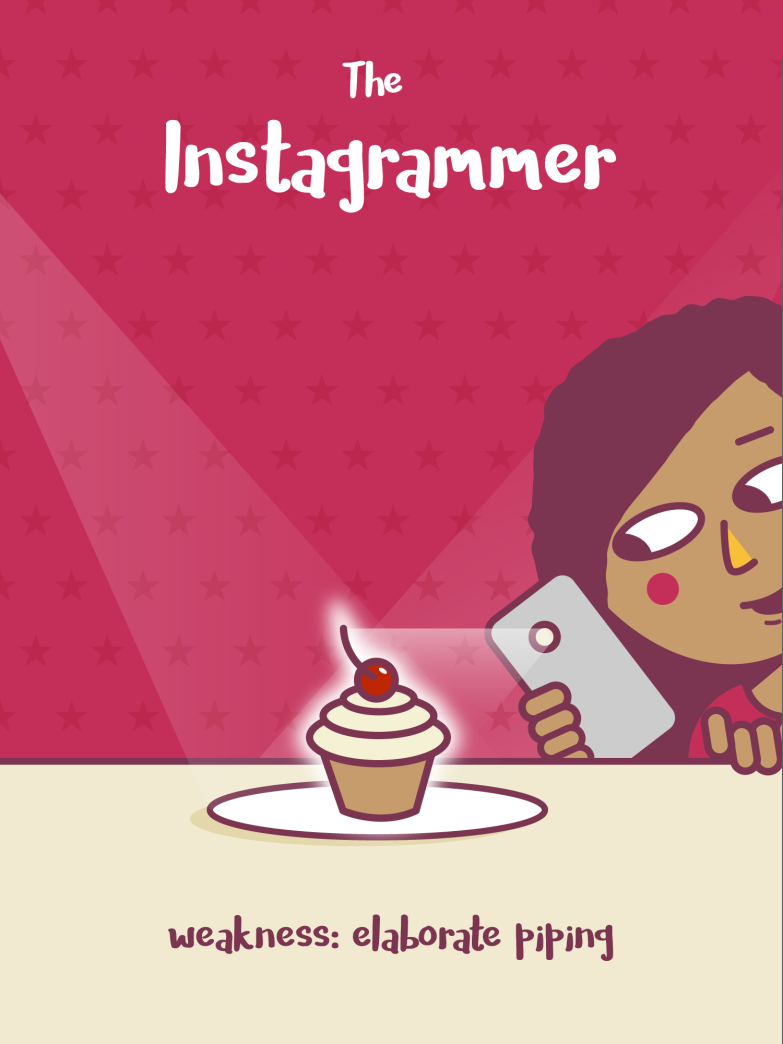 The Separator just can’t abide things touching each other on their plate. It’s especially annoying when sauces mix. Or when things get mixed in with mashed potato. They may use more solid foodstuffs such as sausages to create “walls” on their plate to keep everything apart.

Extreme separators will even separate out foods that come as part of the same thing. Like Jaffa Cakes, for example. Or Oreos. And you’ll never see The Separator dunking a biscuit in their tea, because more than one flavour or texture in one mouthful just won’t do. 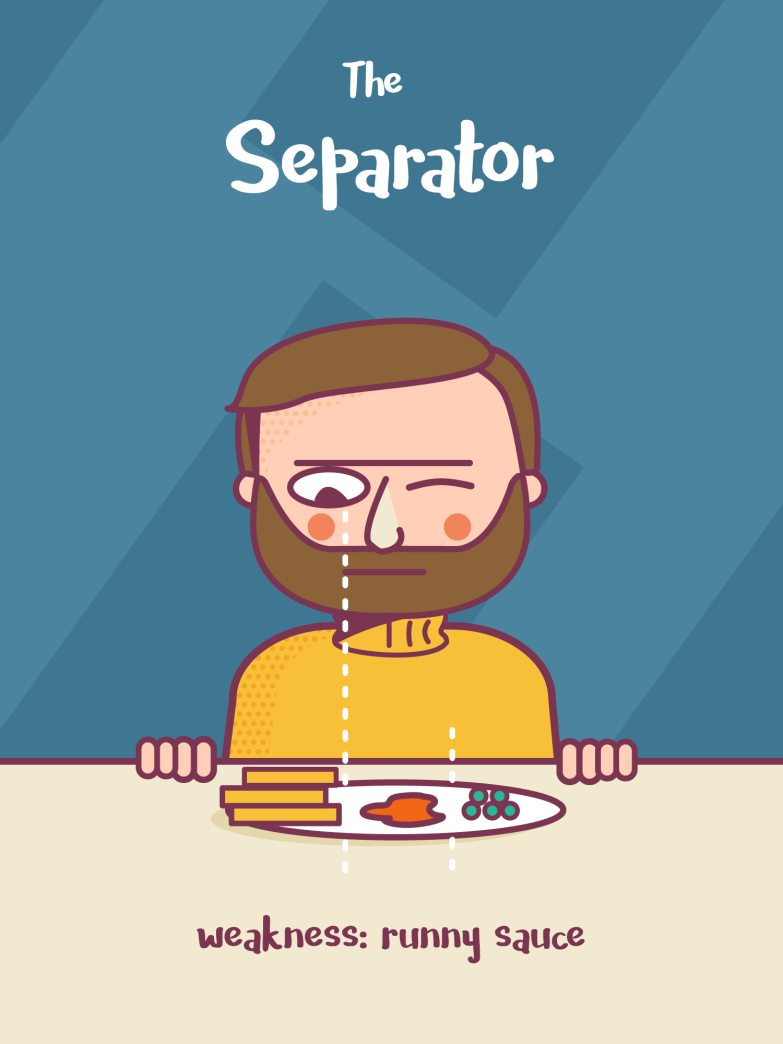 Perhaps best personified (dog-ified?) by Lady and the Tramp in the movie of the same name, The Sharers are that lovey-dovey couple nobody wants to be sat next to at a restaurant. Perhaps they’re still in the honeymoon stage or perhaps they never left it. Either way, that’s lovely; just don’t inflict it on innocent diners.

The Sharers will feed each other mouthfuls of food from each other’s plates, gazing lovingly into each other’s eyes, before ordering one dessert with two spoons (usually an ice-cream sundae). There will be smooches. Many of them. And a lot of holding hands across the table. Maybe even a marriage proposal. 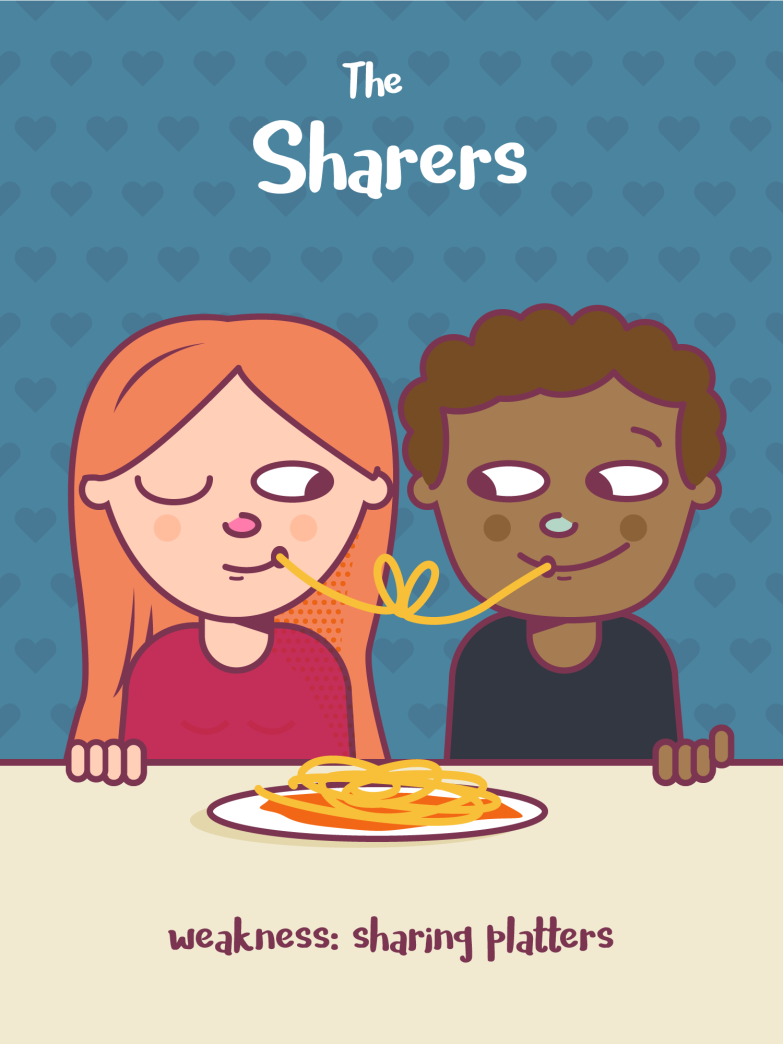 This is the person who’s still halfway through their first course long after the rest of the table has finished. They’ll take teeny-tiny bites, but then chew each one for several minutes. They really want to get the absolute most out of every mouthful. Alternatively, they’re so busy talking that there’s a 10-minute gap between each mouthful, the next forkful of food poised but forgotten.

Their dinner companions have no choice but to wait as their plate slowly clears. Meanwhile, dust will collect, cobwebs will form, the restaurant staff will lock the front doors, years will pass, empires will fall.

And still The Slow ‘n’ Steady Eater chews on… 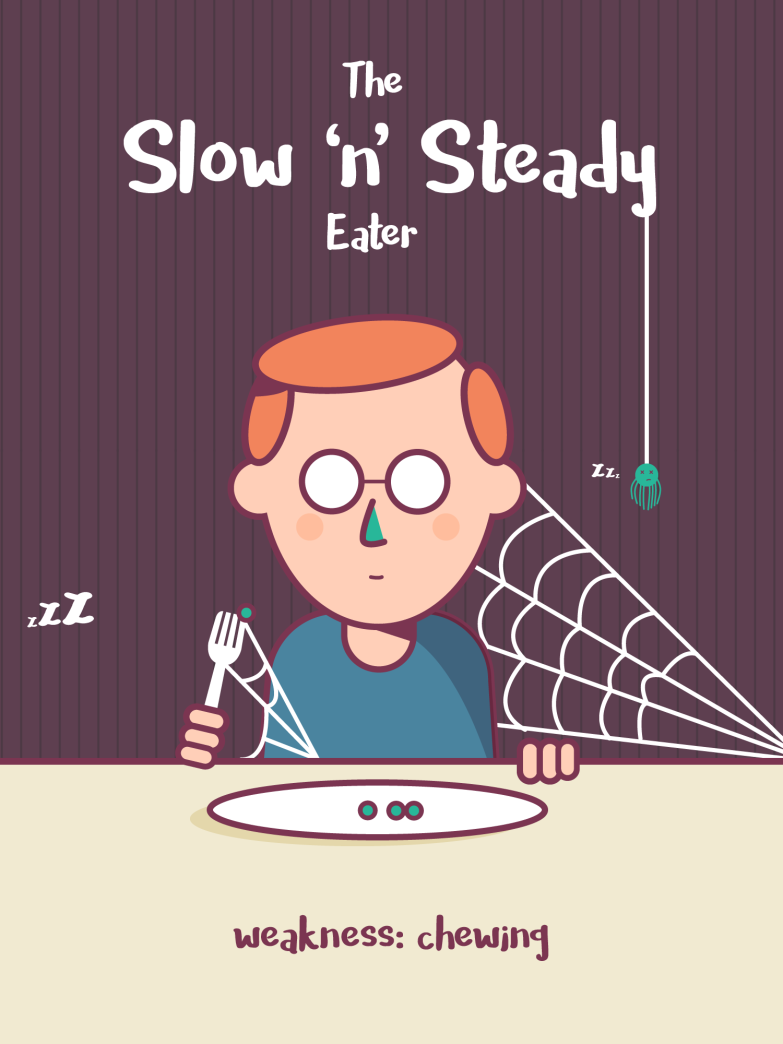