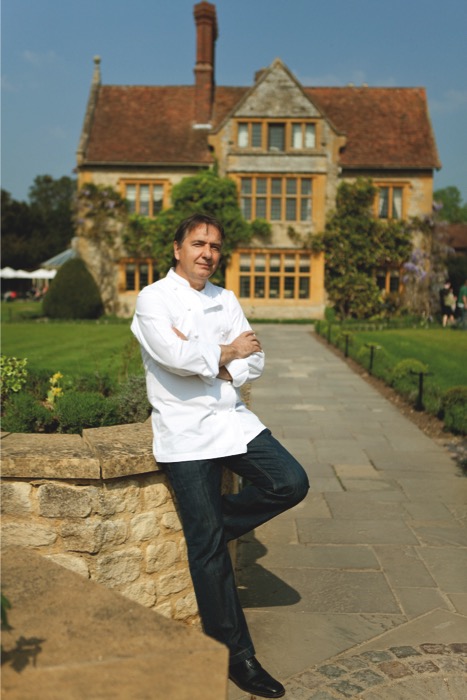 urants that you would fly across the globe to experience. These rare unicorns of the culinary world require months of advance bookings and planning, and command the utmost degree of anticipation. Raymond Blanc's Belmond Le Manoir aux Quat'Saisons, a les grandes tables du monde establishment, is one such restaurant. In fact, it's not quite fair to describe the institution as a restaurant, because the dining aspect is only a piece of the bigger picture. Established more than 29 years ago, the dreamlike estate is set in picturesque Oxfordshire village, a 30 minute drive from Oxford town centre. The two Michelin-starred establishment sits on 30-acres of idyllic English countryside, and houses 32 individually designed guest rooms, a fine dining restaurant, and the acclaimed cookery school, surrounded by manicured lawns, a vast vegetable garden and orchard. The sumptuous gardens, filled with 100% organic vegetables, herbs and mushrooms, keep the Michelin-star kitchen fully stocked. 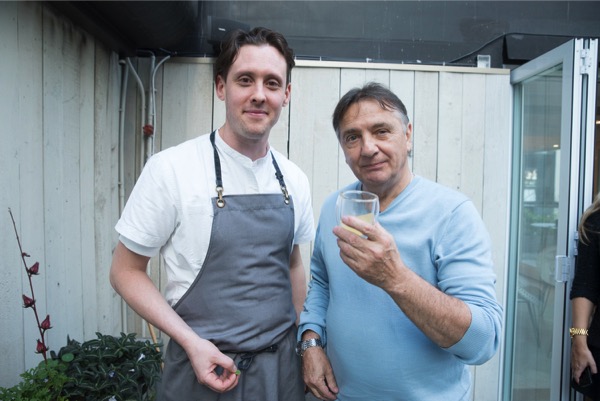 Raised from humble beginnings, Raymond Blanc was born in a tiny rural village near Besançon, France, and worked as a waiter in Oxford before a chance opportunity introduced him to the kitchen. Actually, the story goes, that the chef of the restaurant (the Rose Revived) Monsieur Blanc worked in fell sick one day, and he was asked to help in the kitchen. The rest, as they say, is history. The Raymond Blanc Cookery School opened its doors in 1991, and have so far mentored 34 Michelin starred chefs, with notable names such as Heston Blumenthal, Marco Pierre White, Richard Neat and Peter Eaton, just to name a few. Hong Kong's very own Chef Nurdin Topham of NUR, also expanded his culinary horizon here. 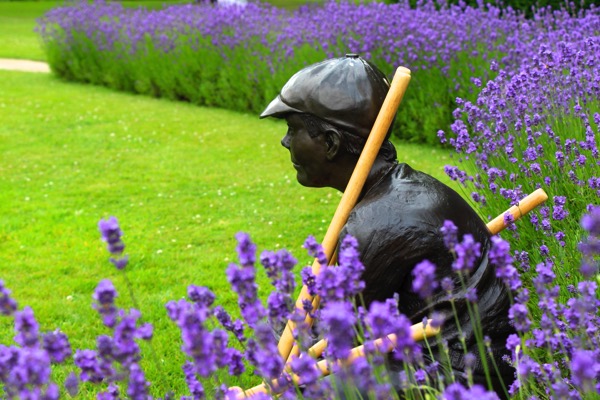 Last June, I had the pleasure of dining at the esteemed Le Manoir. It took a 12-hour flight and a 2-hour train ride to get there, but well worth it. The quaint yet luxurious estate was nothing short of spectacular, and I couldn't help but ogle the beautiful surroundings of lavender-lined croquet field, intoxicatingly fragrant herb garden, a bountiful orchard bursting with summer fruit and a mysterious mushroom valley blanketed in more than 20 species of exotic fungi. 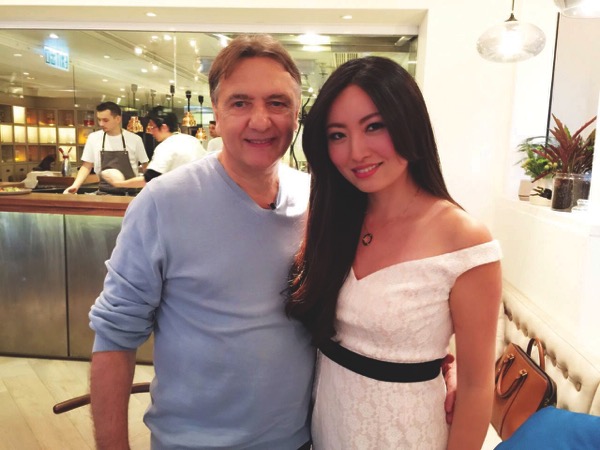 This January, I was delighted to meet Monsieur Blanc again, this time, on home turf during his visit to Hong Kong. I sat down with the enigmatic chef over an exquisite lunch at his protege, Nurdin Topham's, NUR, to hear about his latest projects, his passions, and his food ethos.

On what inspired his passion for molecular gastronomy

In the early 1990s, I was part of an initiative with 50 scientists and F&B professionals at the Molecular Gastronomy Institute in Erice, Sicily. The initiative encouraged the rise of experimental cooking, where traditional kitchen preparation and its processes were studied and improved with basic physics and chemistry. It was a time of eye-opening change in the culinary world, where science and cuisine converged and took on new frontiers.

The key elements that define his culinary ethos

Provenance, seasonality, variety and knowledge are the fundamental ethos behind my cooking. Provenance determines the nobility of the produce, what its story is, where it originates from and from what kind of soil and environment in which it gets its flavours. Using seasonal produce at its prime not only maximizes flavours, it also sustains local farming communities to produce ethical-raised produce. Variety of produce enriches the palate and the senses, and knowledge is key when it comes to understanding all the above. To create exceptional cuisine, a chef must understand, and respect, all these elements.

For example, I use milk and organic flour milled from Shipton Mills because its production process adhere to all these ethos. NUR also uses the same producers. I believe many of the gastro-intolerances of today can be solved by going back to basics, by eating food as nature intended. For instance, GMO whet tends to have at least 20% higher gluten content as compared to organic, non-modified grains, and hence we see a rise of gluten-intolerance diseases today. 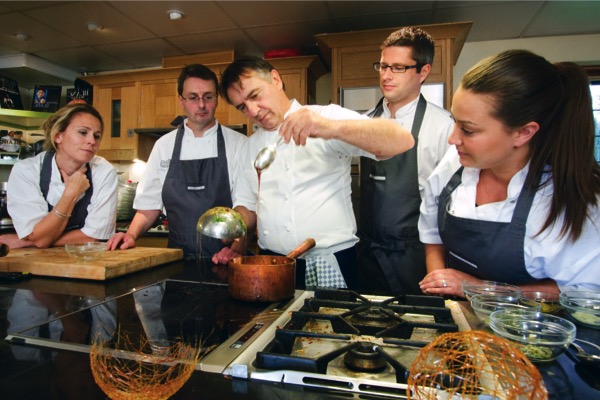 His approach to food

I have a “localvore” approach to food, and I encourage this in all my chefs and my audience.

I believe food tastes best, and is best for you, when it hasn't travelled long distances and undergone much human intervention to get to the table.

One thing I worry about with NUR in Hong Kong is the relatively limited range of local produce, although I am impressed that Nurdin is currently working with 3 local, sustainable farms here to provide the bulk of the vegetables and fruits used in the kitchen, and also working with the local farmers to introduce new varieties suited for the local climate. 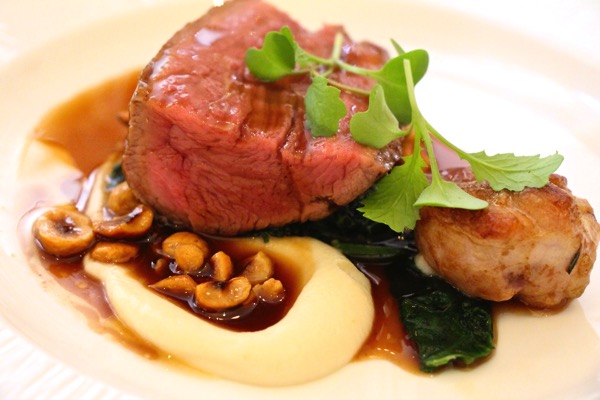 His view of what is modern gastronomy

Modern gastronomy is about looking within, about relearning what our ancestors used to know about food. It's about rediscovering ancient techniques, such as fermentation (which increases taste, texture and flavours). Too often, we are preoccupied with sterile environments, and we forget that foods that are “alive”, like probiotics, are good for us. Modern gastronomy is about going back to the roots, thinking and eating local, and working with local ethical farmers to attain the best seasonal produce. 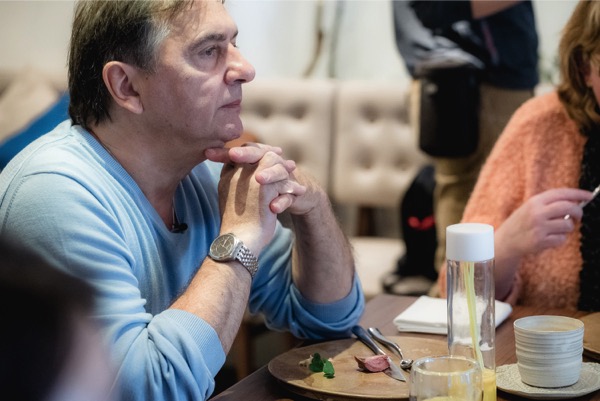 On the Changing Face of Luxury

Today, the idea of luxury is changing. We are changing our perception of food from only valuing what is on the outside, to questioning what is in the inside. Traditional luxury has always been associated with excess, pollution and waste, and I want to help redefine this into “responsible luxury”. This new brand of responsible luxury is about morality, sustainability, and social responsibility. This is what I've been working with the Belmond luxury brand on, to create the first luxury brand that live by the “responsible luxury” motto.

Traditionally, food in England has been “class-based”, and I want to change this, so that everyone can have access to ethical, sustainable produce.

On his appreciation for British cuisine

Even looking back 15 years ago, British food used to have a bad reputation, because the chefs have forgotten about their local gastronomical heritage. There was too much “fusion cuisine” and British food lost its identity. But now, Britain has some amazing chefs, because they are reconnecting with the culinary heritage and history. One newcomer I highly regard is Bruno Loubet from The Grain Store, one of the newest restaurants in London.

I once asked a group of chefs I was mentoring to look into the historical produce and dishes from the regions they come from, and cook two dishes that connect with their heritage. What resulted were young chefs who became so inspired by their local food cultures, and they ended up creating some brilliant dishes.

For my new show “Kew on a Plate” which will air on BBC, I did something never before allowed – I transformed a part of the Kew Gardens into a sumptuous fruit and vegetable garden, on the site of what was once Queen Victoria's royal kitchen garden. The experiment taught me a lot about the history and provenance of heritage varieties of produce spanning the four seasons. 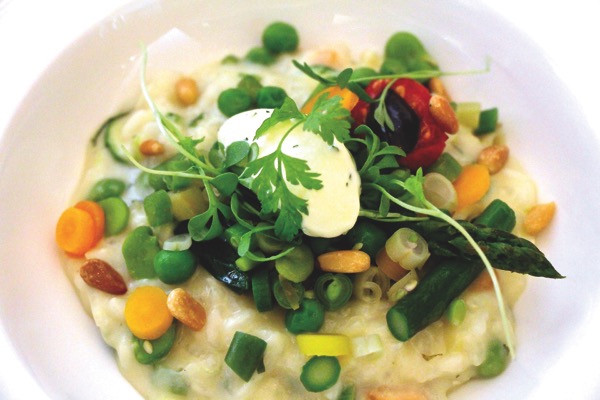 On any expansion plans into China

I've been asked many times if I have plans to establish in Hong Kong and China, as many of my peers (such as Robuchon) has already made their marks in this region. I have no immediate plans as of yet, but if I find a region in China with wonderful produce that I fall in love with, then I will think about opening a restaurant there. Although, I am always cautious of overexpanding.

Next year, I want to explore China with Nurdin, to discover organic, local produce in the various regions. I am not familiar with China right now, and Nurdin (at least one of us) need to learn an acceptable level of Mandarin before we embark!

I feel that Peking duck is the crown of Chinese cookery. The complexity and minute details make this dish “king”, and I want to learn the techniques and create my own version.

On this visit, I spent 7 hours with the Chinese chefs at the Mandarin Oriental (presumably in Mah Wah's kitchen) learning how to make Peking duck. But what I find is that the Chinese chefs are quite secretive, and guard crucial parts of their recipes and techniques! I keep on asking the chefs to show me “all the steps” because I notice they left out important parts of the process! I guess this is a difference between chef cultures, whereas we like to “give away all our knowledge”, Chinese chefs are more mysterious about their secret recipes. 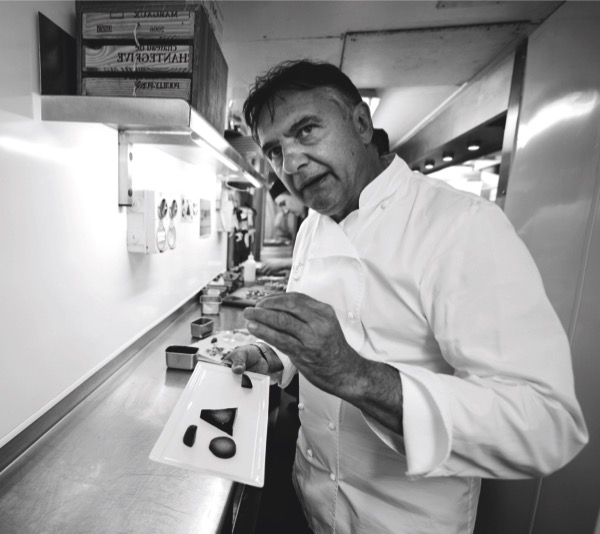 I've been asked the question of why, being a Frenchman, I haven't yet set up a restaurant in my home country. It's a long explanation, but I do answer it in detail in my upcoming book! (Chef Blanc has 2 new books out this year)

In my cooking, I like to unleash my “Frenchiness” with exotic flavours, without loosing my own identity. For example, 30% of the plants in my 11 gardens at Le Manoir originates from China, but I use them to compliment my dishes, without creating “fusion”, so they still adhere to the French ideal.

I once made the Queen Mum sing “La Marseillaise” with her hand on her chest, and she did it in perfect French.

The motto encourages the chefs to excel beyond what they perceive as their personal limits. The novel The Tipping Point describes how out of 20 genius composers, there is only one (such as Mozart) who makes it to the top because they had the ability to push themselves above all others. This is the mind set I want in my kitchen.

I also want to add a new motto “the good doesn't interest others, only the best does”

On his ethos behind Le Manoir

How he would describe himself

I always have a child-like curiosity, it keeps life interesting. I do mistakes, but I don't do kitsch.

After the meal, ask for a private tour of the kitchens and cookery school. We did this on our last visit, and it was an eye-opening, exclusive look at the inner workings of one of the world's greatest kitchens!

Work off some of the meal with a little game of croquet.

The property is divided into many gardens, several of them, which are purely decorative. We loved the Japanese tea garden and English water garden, which was originally dug by monks in the 16th century!

When walking through the gardens, keep an eye out for terracotta jars, which are cloche tunnels used to cultivate courgette flowers. The kitchen at Le Manoir can use up to 200 of these flowers a day!

The Shipton Mills organic flour used by NUR and Raymond Blanc can be purchased in Hong Kong via ida.wong@chopsticks-co.com