Melbourne, like Boston and New York, Toronto and Vancouver, there’s always an underlining “sibling” rivalry when it comes to competing metropolises set in the same country. Our native Sydney-based friends always rave about their iconic harbour and beaches, while our die-hard Melbournian friends gush about the vast parks and down-to-earth sensibilities of their hometown. Having visited Sydney on several occasions, we decided to give Melbourne a try, just to see what all the fuss is about. What greeted us was true to all the praise we’ve heard – a relatively young yet culturally rich city with artsy yet grounded people. It’s easy to see how one can fall in love with Melbourne with its graceful long walkways lining the Yarra, its quirky laneways and passionate coffee roasters. Melbourne is full of enthusiastic Foodies who appreciate the every day, instead of the flash and glitziness of the new “hot” ticket. Come along, as we check out Australia’s “other” cultural capital.

Located on the 55th level of Melbourne’s iconic Rialto building, Vue de Monde offers diners not only a panoramic view of the city, but a fine dining experience full of theatrics. Originally established as a classical French cuisine restaurant by Shannon Bennett, who gained his strips working with culinary giants such as John Burton-Race and Alain Ducasse, the restaurant reconfigured into a fine dining experience full of sensory stimulation and whimsical imagination. The decor is a kaleidoscope of design, with an eclectic arrangement of cultural and historical icons mixed in with a stunning neon art piece by Joseph Kosuth based on his interpretations of one of Charles Darwin’s sketches. The Lui Bar, named after construction tycoon Luigi Grollo, mixes up innovative and classic cocktails under the whimsical Mikala Dwyer’s ‘chandelier’, a transparent cloud sculpture made from industrial residual plastic. Although opulent, the restaurant is also one of Australia’s most sustainable kitchens, using cutting-edge technologies such as an E-water system and “cold kitchen technology” to minimize energy wastage.The menu pays homage to seasonal homegrown ingredients sourced from organic small-farm producers. The restaurant was invited to be the first Australian member of the exclusive Les Grandes Tables du Monde, further putting the restaurant on the world map for exemplary cuisine. Must-haves on the menu – cucumber sorbet with crushed herbs, and the tonka bean souffle. 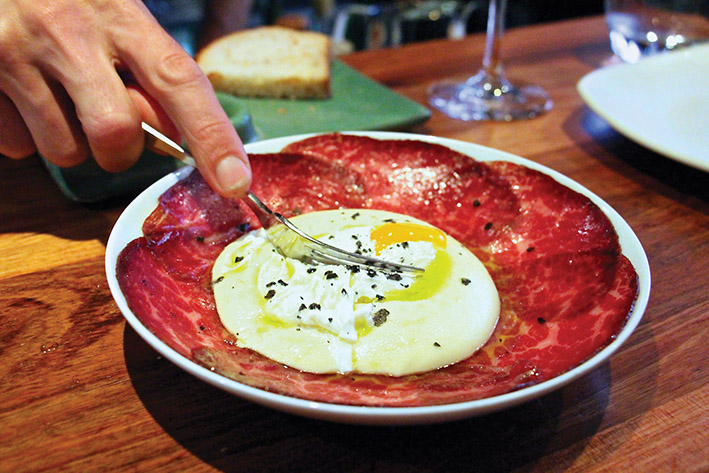 When asked which restaurant is on their top list, the common denominator from our Melbournian friends somehow all distilled into one word – Movida. Even after ten years and a rampant expansion from a single restaurant into a culinary conglomerate with offshoots including MoVida Next Door, Aqui, and Paco’s Tacos, the original MoVida still remains golden. Started by Frank Camorra in a time when Spanish tapas suffered a backlash in Melbourne due to a few ill-established venues, MoVida won back the hearts and minds of diners, with its own brand of edgy, yet classically-rooted tapas. Tucked in graffiti covered cobblestone Hosier Lane, Movida is the type of place one could sit with a glass of wine while plucking away at a plate of rosy jamon before moving onwards to a table and tucking into something more substantial, like the slow-braised beef cheek on cauliflower purée. Signature plates such as the air-dried Wagyu with poached organic egg and truffle foam, swirled together in front of you, and then folded into the most delicious envelope, thanks to the wafer-thin beef, is simply rapturous. Although predictable, you’ll want to finish the meal with golden churro batons dipped in rich drinking chocolate. Trust us, you’ll thank us for the tip.

The Grain Store harkens back to a time when many of the buildings in Melbourne’s now bustling CBD were used as holding stores for shipments, drifting in from the Yarra River. Walk past the barn doors, and you’ll find yourself in a soothing, airy dining room awash in plenty of natural light and wooden tones. The ethos here is about appreciating the best of what Mother Nature has to offer by using ethnically-raised ingredients sourced at their seasonal prime, and using cooking techniques that allow the natural flavours to tell their stories. This is an ideal place to cosy up with a good cuppa while perusing the Sunday papers between indulgent mouthfuls of creamy omelette. We lingered here for brunch before jetting back to Hong Kong and I still remember that sweet corn rosti topped with oozy velvety poached eggs and fat rounds of hearty fennel sausage. 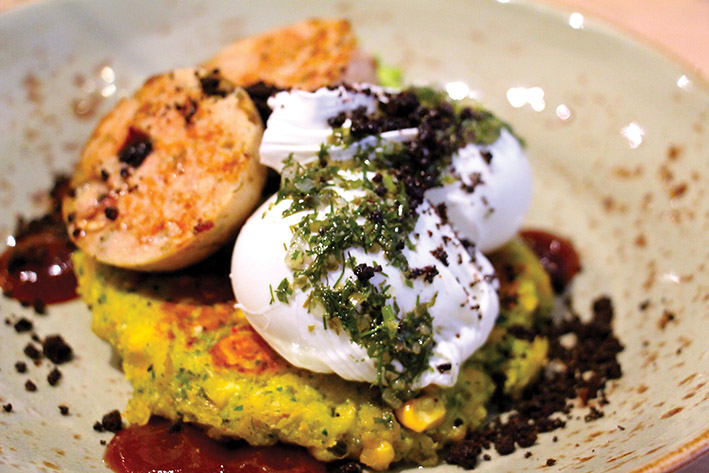 Fennel sausage and sweet corn rosti at The Grain Store

Il Solito Posto knows how to do Italian right. We first heard of the name when it was whispered to us by a nearby diner in Hobart, Tasmania, when she overheard our discussion on where to eat while in Melbourne. We were thankful for this clever bit of eavesdropping, since her recommendation was spot on. Located in a sub-basement, Il Solito Posto literally translates to mean “the usual place”. True to its name, this is definitely a local favourite. The restaurant is divided into two parts, with the “engine” being the upstairs Cafeteria, a busy, fast-paced casual dining area, and the Trattoria in the basement draped in cosy lighting for more formal dining. The menu reads like a gastronomical journey built around comfort eating, full of Italian classics such as gooey slow-braised pork shoulder ragu, juicy meatballs over soft polenta, and fork-tender lamb simmered for hours in white wine.

The brainchild of Chef and Restauranteur Andrew McConnell, who has a knack for opening up trendy eateries such as Cutler and Co, and Three, One, Two, the industrial-chic loft-like space on buzzy Flinders Lane has had its share of glowing critical acclaims. Designed by Andrew’s architect wife, Pascale, the space is all white-washed walls, high ceiling and plenty of natural light. It’s also a hard-working, versatile restaurant, that stays up for breakfast, lunch and dinner service, seven days a week. On our last visit, we perched on the white marble bar overlooking the amphitheatre-esque open kitchen, and sipped refreshingly crisp The Hills Cider while slathering thick cuts of house-made bread with creamy butter. The charcuterie list is extensive, so make sure to pluck through a plate before settling into the mains. We indulged in glossy succulent pork chop over charred fennel alongside vibrant green florets of the house-famous broccoli. Cumulus – this cloud certainly has a silver lining. 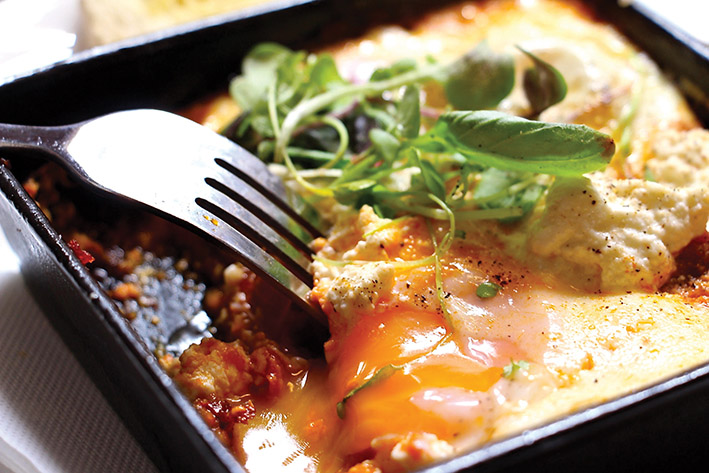 Seven Seeds is a love letter to the art of great coffee making. The name was inspired by the precious cargo of coffee seeds that Baba Budan once smuggled from Yemen to India during the 17th century, during a time when coffee cultivation was strictly confined to the Arabic world. This small rebellion, made coffee cultivation possible throughout the Americas, Asia and Africa. So it comes as no surprise that Seven Seeds takes coffee brewing quite seriously.The cavernous converted warehouse is a micro roaster, retailer and cafe.There’s a glass-enclosed coffee laboratory up front, a communal seating area against a backdrop of exposed brick walls, and temperature-controlled coffee vats at the back.The menu here is limited but sometimes simple is what you need.There’s Bircher muesli with toasted coconut, house-made crumpets with honeycomb butter and plenty of egg options to accompany that cup of Joe. Our favourite – the skillet of baked eggs in tangy tomato sauce with crumbled ricotta, mopped up with a generously buttered slice of rustic bread.

Queen Vic Market – Spanning across two city blocks, Queen Vic has been the heart of Melbourne for over a century. Artisanal craft vendors jostle with meat and vegetable purveyors for shoppers’ attention, and there’s even a Social Kitchen Cooking School for visitors to pick up a few culinary tips.

“I love you like a fat kid loves cake” – Indulge your sweet tooth at the Dessert Concept Bar of the Adelphi Hotel with treats such as the Basil Garden with olive oil and honey ice cream, white chocolate cremeux and chocolate soil. Or satiate the booze hound with dessert cocktails like Flossie, a concoction of blood orange liqeur, sparkling wine and candy floss.

Wine Country – Swirl and sip while using fancy schmancy words like “terroir” and “minerality” when tasting these cool-climate wines at Yarra Valley.  Just an hour’s drive from Melbourne, it’s time to get out the decanter! 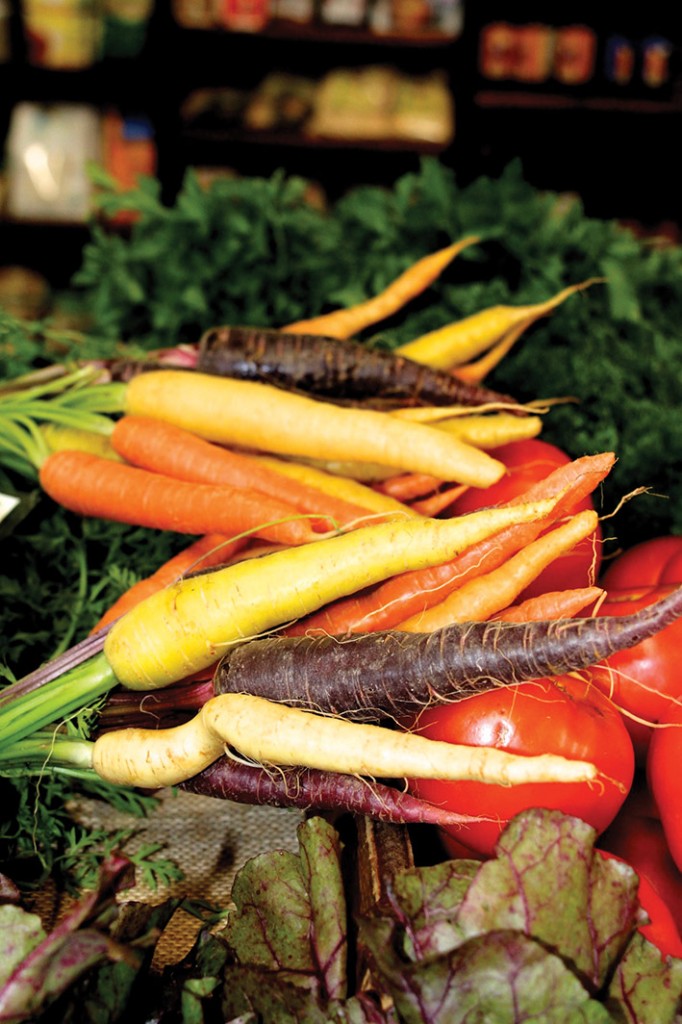