Celia Hu immerses herself in the super geil eats of Munich 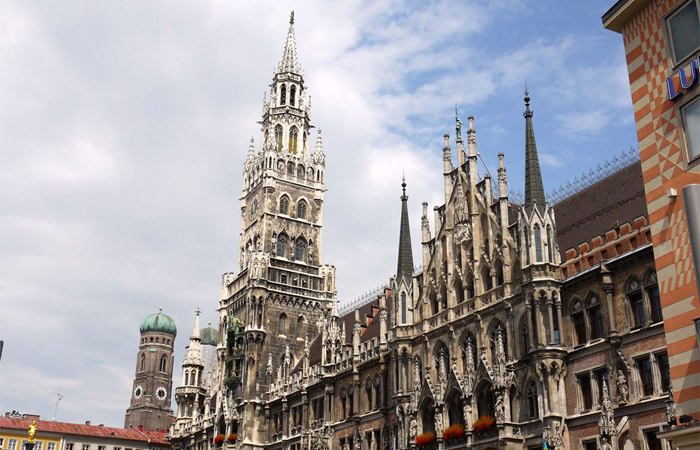 Rathaus-Glockenspiel of Munich in Marienplatz

My earliest glimpse of Europe was through the beautiful visage of Munich (or München), the first European city I ever visited. As the capital and largest city in the German state of Bavaria, Munich, with its vast parks, historical architecture and churches, has been the center for science, arts and culture in Germany since the early 19th century. Most of Germany’s formidable engineering and software brands reside here, with iconic names such as Siemens and BMW jostling for space with film studios, publishing houses as well as beer producers. Each September, under the decorative maypoles and crisp blue and white colours of Bavaria, beer lovers congregate to celebrate that sacred festival known as Oktoberfest, so there’s no better month to journey to the home of Weissbier, that magical land of technology and lederhosen, known as Munich. 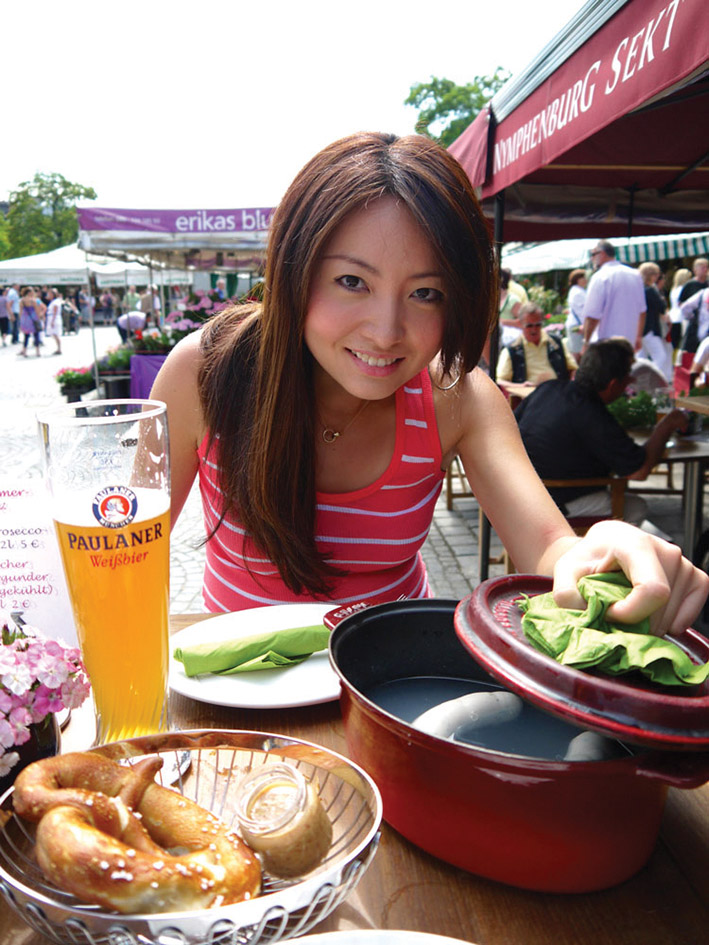 This iconic white sausage make up one part of a quintessential Bavarian breakfast. Made with finely minced veal and pork back bacon, and infused with a variety of herbs and spices ranging from parsley, lemon, mace, onions, and cardamom, these sausages are traditionally eaten with sweet mustard (or Weißwurstsenf) “before the Church bells chime”. The time limit dates back to the age before modern refrigeration, when these highly perishable sausages were made fresh every morning to be eaten before noon. Today, most Munichers still observe the tradition and finish these scrumptious sausages before noon, along with freshly baked, giant-salt encrusted pretzels. Weißwurst is served in most restaurants (but only in the mornings!), and my favourites are from the gourmet stalls in bustling Viktualienmarkt. Oh yes, and remember to wash all that down with a cold, foamy Maß of Weissbier!

A gourmand’s haven, Viktualienmarkt is possibly the most beautiful farmers’ market I’ve ever visited. Originally located in the city centre, Marienplatz, the market was moved in 1807 a few metres to its present location, in order to accommodate its ever expanding size. Today, the market is a gourmand’s dream, with 140 stalls enticing visitors with seasonal fruits and vegetables, venison and fowl, eggs, butter, honey, fish, cheese, meats, sausages, flowers, various delicatessens, wine and tea vendors covering 22,000 square metres. Old traditional Bavarian specialities mingle here with new creations – this was the first place I saw green cheese made with wasabi! A tall Maypole marks the market, as pre-dating the time of general literacy, the decorations on each pole represent a trade for traveling salesmen and craftsmen to refer to. Today, Viktualienmarkt is also the centre of many local folk music events. 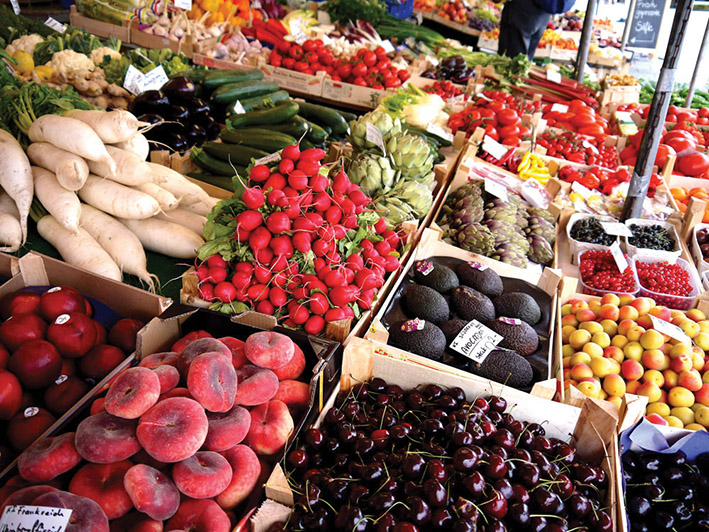 When a beer hall is as old as Hofbräuhaus, there’s bound to be some interesting stories. The brewery was founded in 1589 by Wilhelm V, the Duke of Bavaria, and the giant vaulted-ceiling Great Hall can seat 1,300 people at any given time along communal tables, some of which, are more than 100 years old! Hofbräuhaus’ famous beers have played inspiration to artists such as Mozart, who once lived around the block and credited the beers for fortifying him during the writing of his opera “Idomeneo”. The beers even saved Munich during the Thirty Years’ War of 1632, when the Swedish King Gustavus Adolphus agreed to peace, if the city surrendered some hostages and 600,000 barrels of Hofbräuhaus beer. During WWI, Lenin was a regular at Hofbräuhaus, and in 1919, the Munich Communist party set up headquarters there. On the opposite side of the political scale, Hitler also held his first National Socialist meeting on the 3rd floor, in 1920. Definitely a must visit for any history buff or beer lover! 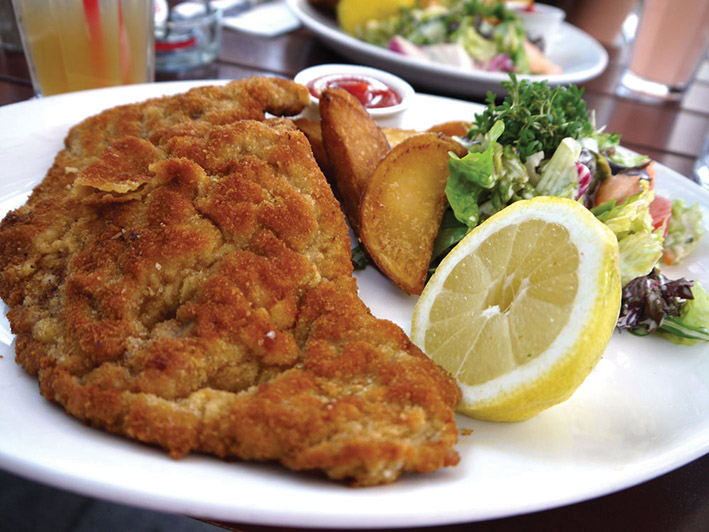 Built in 1789, the Englischer Garten was converted from a former hunting ground and with a coverage of 417 hectares, trumps both Hyde Park in London and Central Park in New York in size. The Chinesischer Turn (Chinese Tower), a wooden pagoda in the midst of the park, marks Munich’s second largest beer garden and can accommodate up to 7,500 guests at any given time. The perfect place to unwind, food stalls offering traditional Bavarian delicacies such as hendl (grilled chicken), obatzda (Bavarian cheese blend), steckerlfisch(crispy grilled fish on a stick), schweinshaxe (roasted pork knuckle) with knödel (bouncy potato dumplings) and auszogne (fried dough pastry) border the beer garden. And if the season is right, you can catch surfers battling the waves in Eisbach, a man-made river that runs through the park! Following WWII, Munich-based G.I.’s started the trend when they missed surfing the waves along their native Californian shores.

When Paul and Elsa Kafer opened their little grocery store in 1930, they may not have anticipated how their family business would become a household name to represent German quality and excellence in cuisine, more than 80 years later. Today, the Kafer brand is synonymous with fine taste, and is a restaurant group, a delicatessen chain and a catering conglomerate. Kaefer Schanke, the restaurant located above their flagship delicatessen, serves up modern Bavarian cuisine with impeccable service. All action revolves around a central open kitchen, modeled after the style of an old castle kitchen. Chef Volker Eisenmann, who structures each dish around seasonal freshness and regional specialty produce, captivates diners with his take on modern Bavarian cuisine. Codfish poached in seawater shares space on the menu with Tyrolean veal with apricot saltimbocca and classic wiener schnitzel, while the famous Kafer crispy skin duck remains the pièce-de-résistance. 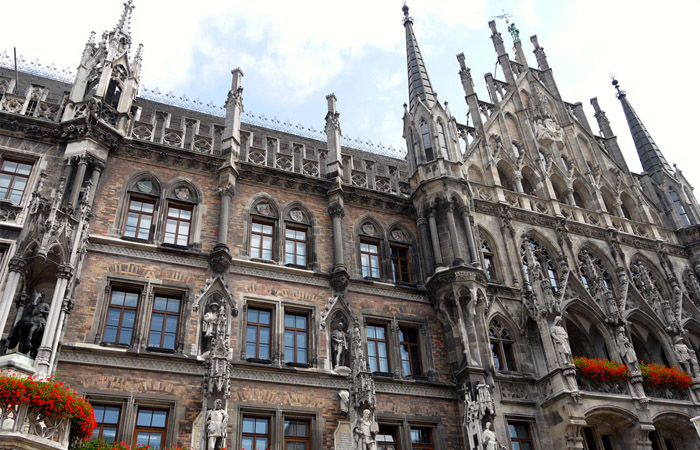 Rathaus-Glockenspiel of Munich in Marienplatz

Cafe Clockenspiel is the ideal place to grab brunch or a relaxing cup of coffee. The food is often served with a side of entertainment. The cafe is named after Glockenspiel, one of the main landmarks of Marienplatz, the main square in the heart of the city and has the best view of the tower. The revolving chimes on top of the tower was constructed in 1908, and depicts the marriage of Duke Wilhelm V (who founded famous Hofbräuhaus brewery) to Renata of Lorraine. Every day at 11am, 12pm and 5pm (summers only), the 43 bells and 32 life-sized figures in the chime piece re-enact the scenes from the wedding to the cheers of tourists and locals alike. The show lasts around 15 minutes and at the end a small golden rooster at the very top of the Glockenspiel chirps three times to mark the finale. The cafe is definitely the best place to enjoy a relaxing brunch or a few beers, while watching this quintessential Munich spectacle. Make sure you arrive early to ensure a window seat! 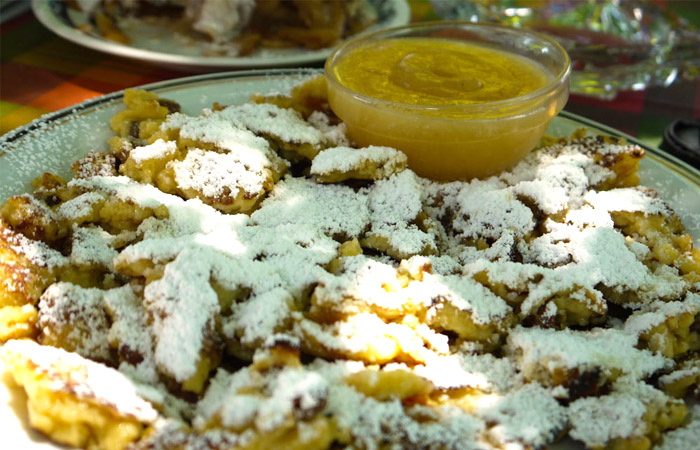