Jamie Oliver recently visited Hong Kong to see the sights, sample the flavours and check in on his little venture called Jamie’s Italian

“I'm so excited to meet Jamie, I grew up watching him on TV!” was the most frequently heard utterance amongst the crowd of journalists as we eagerly awaited the first press conference with Jamie Oliver in Hong Kong. The phrase does somewhat date Jamie (and at 39, he's not really very old), but it also conveys the popular sentiment that, for many, their relationship with food “grew up” with Jamie.

From his early days as a fresh-faced young chef cooking for his mates on his first TV show, the Naked Chef, growing into his rustic-style home cooking on Jamie at Home and then easy quick recipes on Jamie's 30-Minute Meals, to his passionate community outreach programmes for disadvantaged youths in Jamie's Kitchen and his revolutionary School Dinners series, Jamie, in a sense, also grew up with us.

Today, with 30 shows under his belt, 19 cookbooks and a name brand that spans the globe, Jamie has truly built himself a culinary empire. But the man behind the brand remains humble to his roots, and maintains that he is first and foremost, a chef. Dressed in his signature casual ensemble of jeans, t-shirt and casual jacket, Jamie Oliver made his first press appearance in Hong Kong at Causeway Bay's Jamie's Italian this March. Perched casually on a bar stool, the incredibly affable Jamie chatted away with the press about his humble beginnings, his love of food, and his passion to pass on the knowledge of good cooking to future generations.

On how Jamie's Italian came about:

We started Jamie's Italian seven years ago in the UK, but it was really a project I've been dreaming about since I was 18. I started work in a famous Italian restaurant in London called Neal Street and worked with Gennaro Contaldo, who is like the James Bond of the Italian kitchen. To this day, we still work together on Jamie's Italian. 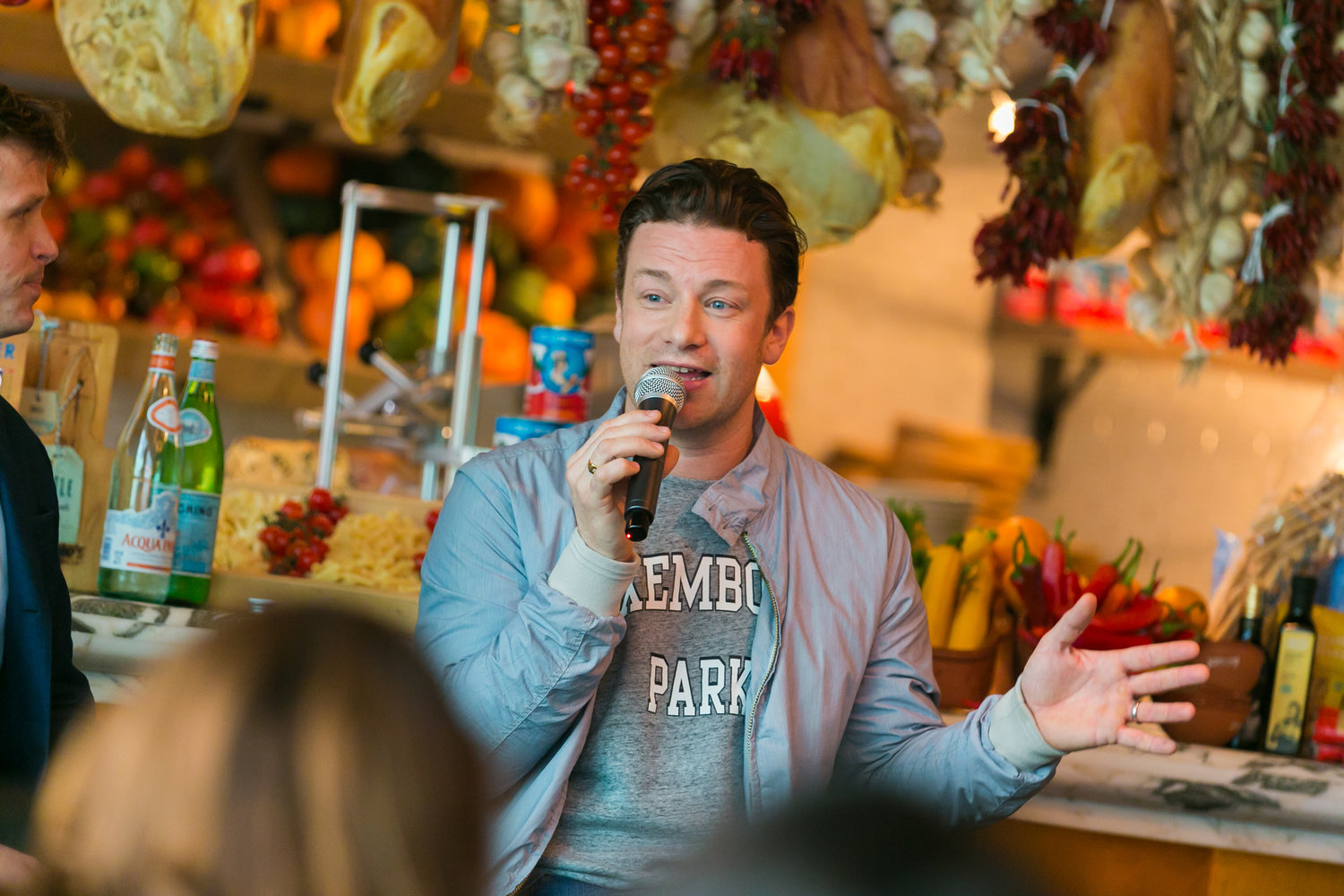 On why he decided to open a restaurant in Hong Kong:

I never thought we'd come to Hong Kong, never ever thought it'd happen; but I was approached by Big Cat Group who came out with a plan to translate what Jamie's Italian is about to the Hong Kong market. When you have a restaurant in another country, it's like you're giving your baby away, and you only want to give it to someone you trust. We have a very tight, close-knit team in Hong Kong, and we're just about getting ready to open the Harbour City location by the end of May to early June. 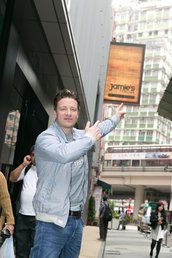 On worries about brand dilution with increased restaurant expansion:

The reality is, when you open multiple restaurants, after the second one, you're physically never going to be in that restaurant like the first one. That's why I only work with people I can trust. I have a bible on how we cook the food, on how we train and hire staff, so even if I can't be there with every member of the team, it's about “what would Jamie do?”

I don't dream of any global domination. I’d rather stay steady, make sure it's done right, and choose the right partners. We are teeny tiny compared to other restaurant groups, and the person on top is me, who is a chef. I think differently than a businessman, because for a businessman, food is not in their veins, money is. We are not in a rush to do things, but go at a good steady pace. 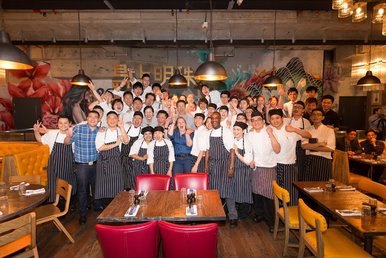 On championing locally-sourced foods in his restaurants, and where the produce in Hong Kong's Jamie's Italian are sourced from:

Sourcing in Hong Kong is quite mixed. A lot of the campaigning we do focuses around ethical issues, such as sustainability, traceability, and the avoidance of certain pesticides. For Hong Kong, we source both locally as well as from the US, Europe and Australia. For example, we'll get the olive oil and the chartecurie from Italy. There's plenty of fish in Hong Kong but we can't buy all of them because some are not Amnesty approved. But we do try to get as much locally as possible, and it does take time to build up a relationship with the local producers. 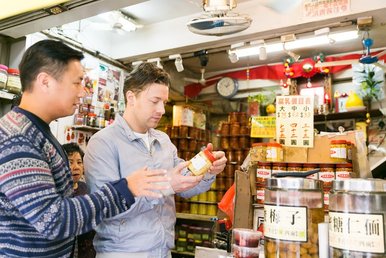 On not attending the opening of Jamie's Italian in Hong Kong and it being joked about by Gordon Ramsay:

First of all, there's only one of me, and I think it's fair to say that I run more consistent and efficient restaurants than Mr. Ramsay. He's the type of guy that would turn up for the launch, do the jazz hands, and disappear. I'm much more honest. In England, I pay for every single one of my restaurants. I write the menus, engage with the chefs. That's what I do – I'm a chef, a CEO, a MD, it's a bit of everything.

I try to get to the launches, but the actual fact is that it's not very useful as all it does is put extra pressure on the team at a time when they should be focused on the launch. I'd like to act like an owner rather than pretending to be a celebrity chef. You're not going to see me on the line in the kitchen, so let's just be realistic about it and not pretend I'm there every day. (We talked to the team at Jamie's Italian afterwards, and they noted that Jamie has been to Hong Kong on previous occasions to work on the restaurant, but did not want the added attention of a press conference.)

On his favourite food moments in Hong Kong:

I really enjoyed our dinner at Spicy Crab under the Bridge last night, and the cocktails at Brickhouse were great – the tequila really hit the spot. I also loved the traditional breakfast this morning with all sorts of different congees. The blood congee is my favourite, and those little fried doughnuts you dip in to the congee were really nice. I'm really looking forward to visiting the local markets this afternoon. When I'm back home, I love dim sum on Sundays for brunch, it's just the best. The diversity is just incredible. 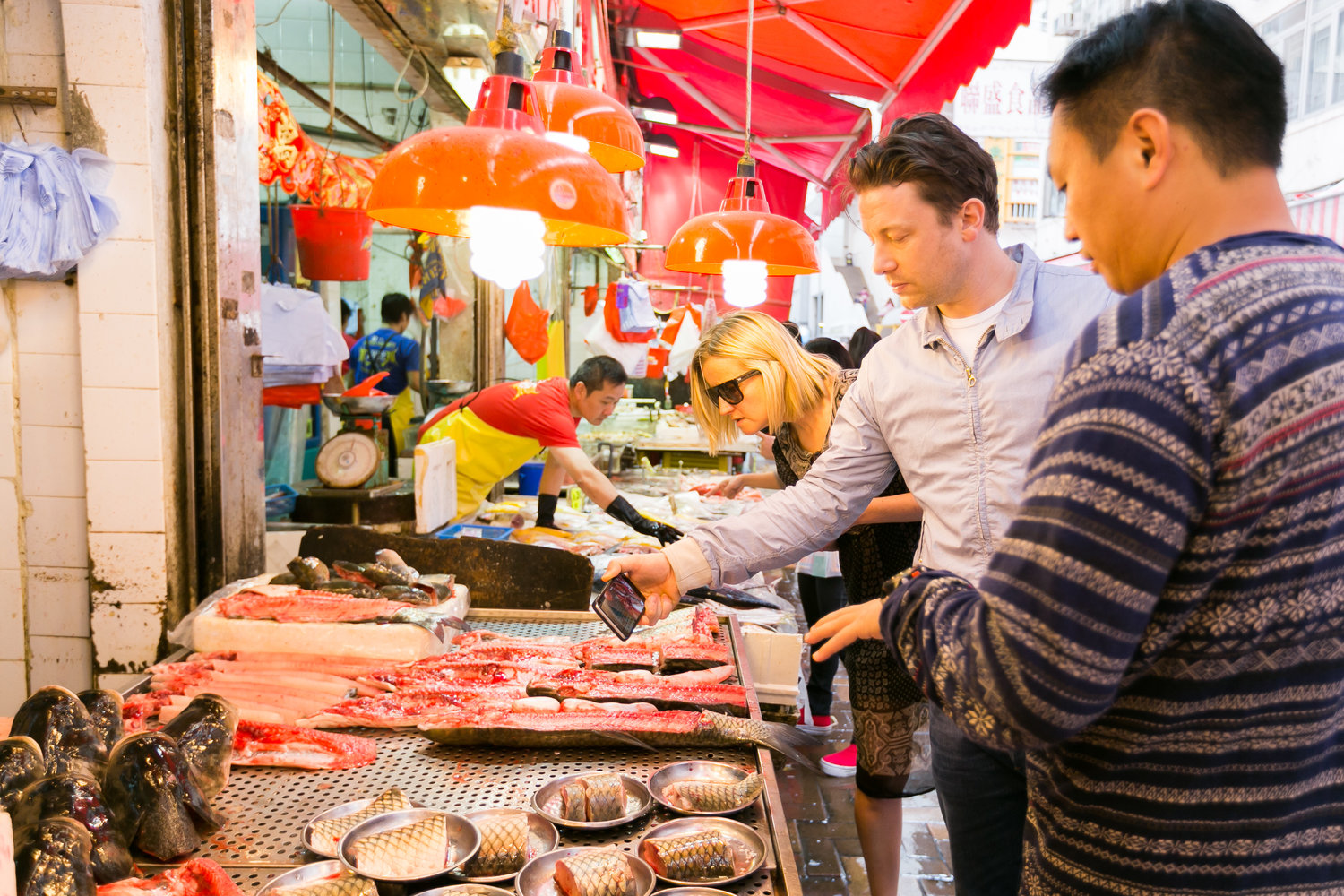 On his favourite Cantonese ingredients:

It'll have to be ginger. Ginger is like one of my best friends in the whole world. There's just so many ways of using it, from sweet and savoury dishes to drinks and soups, ginger's just got massive range. I had some beautiful congee with the most amazing hit of ginger this morning. Also, it's quite hard to grow ginger in England, so it's romantic to have access to something I can't grow. 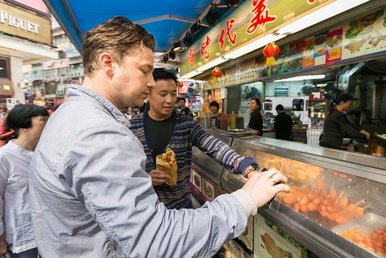 On the first thing he ever cooked:

That's got to do with mastering eggs – making an omelette or scrambled eggs. The first proper meal I cooked was probably a Sunday roast, with potatoes and roast chicken. I was about eight or nine at the time. I was born into a restaurant; I lived above one. Our family owned a restaurant and my dad put me to work early, prepping vegetables, sweeping floors, and cleaning toilets starting from when I was eight. He had me in bins, up chimneys, anywhere he can fit me in that the men wouldn't be able to get into.

On his Food Foundation campaign:

Ten years ago in Britain, we were serving low quality, processed foods to six million children in schools between the ages of four to 18. We had the most unhealthy population in Europe and it was a real struggle to get access to the government to talk to them about improving food programmes in schools. After our first documentary came out, the response was amazing and I could get a meeting with the Prime Minister within a week. Ten years ago, if I wanted to produce food for school children, there were no standards, but if I were to produce dog food there were legal papers by the stacks. Today, standards have improved, they are still not where we want them to be, but are much better. Good is a moving target, and we are always pushing for better.

Last September, after six years of campaigning, Britain passed a law that allows every child to learn how to grow food and gain practical cooking skills in school. This year, on Food Revolution Day on May 15th, we want people to sign a petition to put into law that children must be taught in schools about food, where it comes from and how it affects their bodies. We believe it's a child's human right to learn how to grow and cook nutritious food at school. At Jamie's Italian, we hosts school groups at least three times a month, and educate children on the various types of produce and how to cook simple meals.

On what he feeds his children?

I've got a thirteen year old, a twelve year old, a five and four year old at the moment. They are pretty good with food, and like most kids, they have their good and bad weeks. We try to have a lot of fun around food. We go to the markets with them and let them decide what we're going to eat that the week. A lot of the time we have to put back their choice of crappy sugary snacks though. I really do try to instill in them the openness in trying new things, and we have a simple salad every day. Sitting around the table and having that time together is important, and we do that more on the weekends because I work long hours during the week. My advice to parents – don't think about what they don't like to eat, but concentrate on what they do like.

On adding to his brood:

I have four children, and my home is...well, it's carnage. My wife does want another baby, but I'm really trying hard not to make that happen. She's chosen all the names of our children so far, and they've all been centred around flowers – Poppy, Daisy, Petal and Buddy. If we do have another child, I really want another boy, and I want to call him Elvis.

On the future of food:

Definitely, more research will be published about the link between unhealthy eating and dietary diseases, which is already responsible for 68 per cent of health issues in the Western world. As countries get richer, meat consumption will increase. We already eat way too much meat, so getting people on a more plant-based diet and at the same time, respecting good quality meat but just eating it less often, will be key.

In the past two years, almost everything I post on Instagram and Twitter has been largely vegetarian focused, not because I am a vegetarian – I love meat and fish, but because the public are interested to learn more ways to love vegetables. It's probably better in Hong Kong as I've seen a lot of vegetables done in different ways, but in England, America and Australia, it's still very much a heavy carbohydrate and protein-based diet. Last year, for the first time in world history, more people died from eating too much of the wrong things than having too little to eat. I strongly believe food education is the solution to these problems.