Celia Hu takes her taste buds through the flavours of Okinawa, Japan

My fascination with Okinawa began in elementary school, when my best friend brought back a bottle of star-shaped sand from her hometown visit. Since then, I've been riveted by her tales of crystal clear waters teeming with colourful fish and a tropical Japan so different from the rest of the nation. Okinawa, home to the most centenarians per capita than anywhere else in the world, is a strange and wonderful mix of cultures. Formerly the Kingdom of Ryukyu, and a tributary of China, the local culture is a mix of Chinese and Japanese influences. In 1879, Japan annexed the archipelago and tried to force assimilate the Ryukyu Kingdom, but the population resisted and today, Ryukyu culture is very much alive and celebrated. The Americans added their cultural influence following the Battle of Okinawa, the bloodiest ground warfare on Japanese soil, where it claimed more casualties than the atomic bombs of Hiroshima and Nagasaki. Okinawa remained in American military possession until 1972, and there are still several military bases in operation on the island. 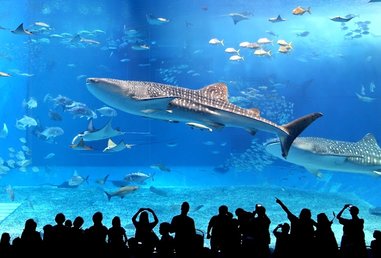 Come along as we sink our teeth into juicy Agu pork, slurp up chewy Okinawan soba, gorge on pineapple cakes and purple yam tarts, munch on sea grapes and kelp and wash it all down with the local favourite, goya juice.

We stumbled upon this quaint little Ryukyu teahouse after our visit to Shuri Castle. Located on a quiet street across from a little temple nestled in a small reservoir bordering the Okinawa Prefectural University of Arts, the wooden cabin serves up mouth-watering Ryukyu dishes in traditional settings. Shoes are stored in wooden cabinets before guests walk barefoot into the old house, complete with tatami rooms and zen garden. We slurped up the regional favourite, pork soba, topped with either fall-off-the-bone tender pork ribs (soki) or sticky collagen-rich pork trotters (tebichi). Okinawan soba differs greatly from those found in the rest of Japan, and contains chewy thick noodles made from wheat rather than buckwheat. This gives the noodles a fantastic, hearty flavour, especially when soaked in a clear pork bone and chicken broth. The flavour is reminiscent of those from my beloved Northern China. We loved this place so much, we returned a second time for lunch. And a little tip – try to be seated on the open-air podium overlooking the zen garden, these are the best seats in the house. 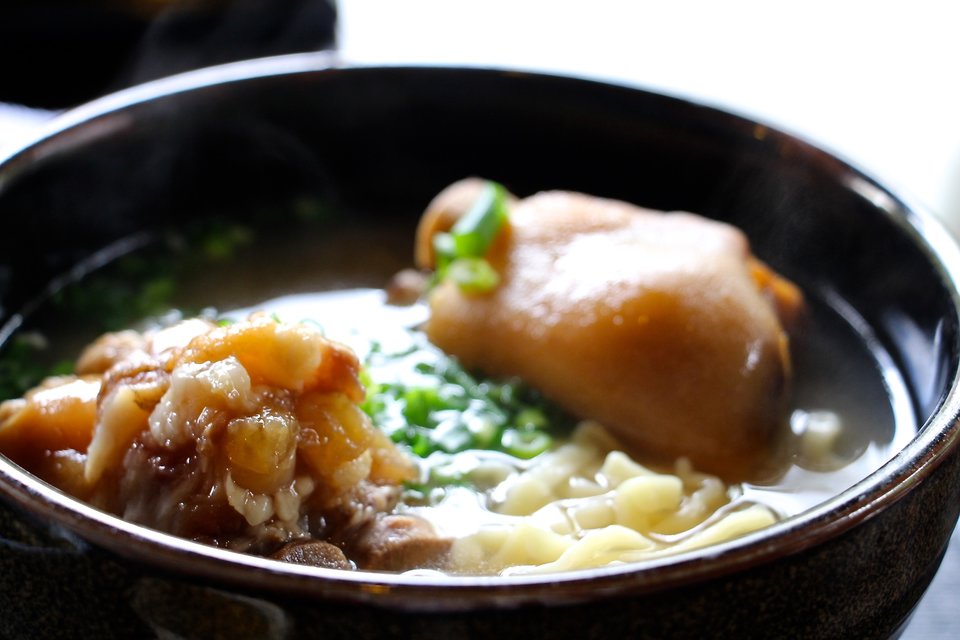 This irresistibly charming old estate is one of the best places to savour Okinawa's famous Agu pork. Brought from China 600 years ago, these small black piggies are renowned for their tender flesh and succulent buttery fat. Ufuya is the perfect lunch spot on the way to Churaumi Aquarium and is so popular that it is strictly a “no reservation” venue. Made up of several centuries-old restored wooden houses from the Asato, Aragusuku and Takushi families, the main house faces a moss-covered landscape with a cascading waterfall. We devoured bowls of Agu pork soba and lightly seared pork over rice, covered with fragrant minced ginger. Another favourite is the mozuku appetizer, a tangy blend of slippery local seaweed steeped in ponzu. Cap off the meal with fluffy giant cream puffs filled with rich brown sugar cream, or the pari-pari pudding with a crème brulee crunchy top. The best seats in the house are on the outdoor podium facing the waterfall, so be sure to wait for those prized tables! 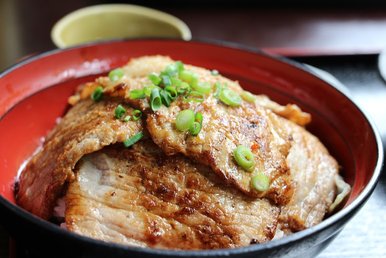 We wanted to sample the local Awamori liquor one night, so opted for the highly recommended Tsukinohama a short walk from our hotel at Kafuu Resort. We were greeted by the earnest grin on a big Agu pig statue upon entering the little wooden structure. The two-storey house is all rustic weathered wooden beams and grey stone, and specializes on shabu shabu. Instead of beef, the highly coveted Agu pork is the meat du jour here. We started our meal with crunchy local sea grapes (umibudo), which popped with briny juices then washed it all down with fiery glasses of awamori. Our pork shabu shabu feast started with creamy tofu broth which, after a slow simmer, solidified into lusciously silky spoonfuls of tofu. Buttery slices of pork followed accompanied by a variety of mushrooms, vegetables and a wooden trough of minced fish paste. Each thin wafer of pork came capped with a generous layer of creamy fat that made each mouthful literally burst with porky aroma. 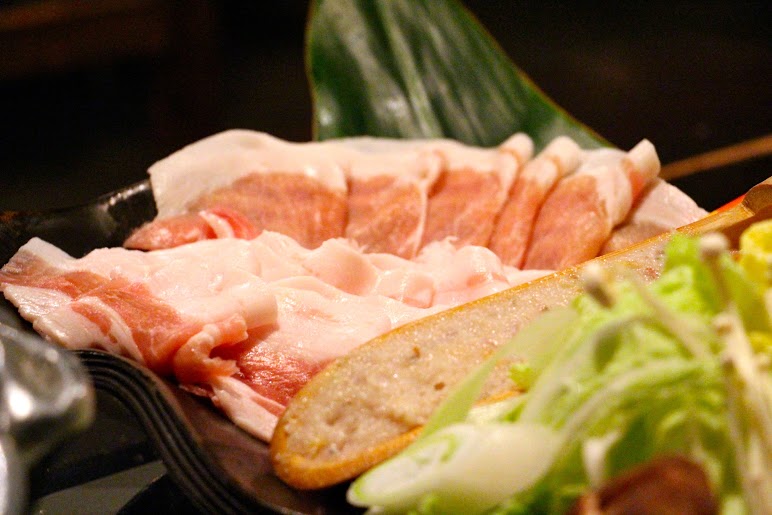 As the former palace of King Sho Hashi, unifier of the three principalities of Okinawa and the founder of the Ryukyu Kingdom, Shuri Castle has seen its share of turmoil. Originally built in the 1300s, it served as a royal residence and court, as well as the trade and administrative center of the kingdom. However, the castle was burned down several times during battles, the last of which was during the Battle of Okinawa, when American forces bombed the structure for three consecutive days and completely burned the palace to the ground. It was later restored to its former glory in 1992, and today, the palace welcomes visitors with more peaceful intentions. Surrounded by gardens, the tearoom is situated in the kusarikorekan, an area once used by the king for studying and receiving foreign dignitaries. We loved savouring the fragrant sanpin tea, a flowering jasmine blend that was introduced from China 600 years ago, in the soothing tatami room while sampling an assortment of Okinawan sweets. The tempting spread includes intricately shaped hanabouru cookies, sesame paste filled kunpen cakes, steamed chiirunkou sponge cake and buttery chinsukou cookies reminiscent of shortbread. 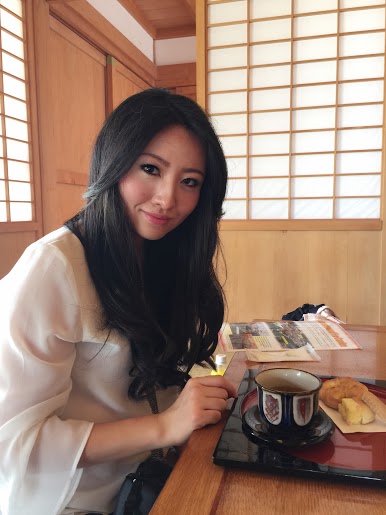 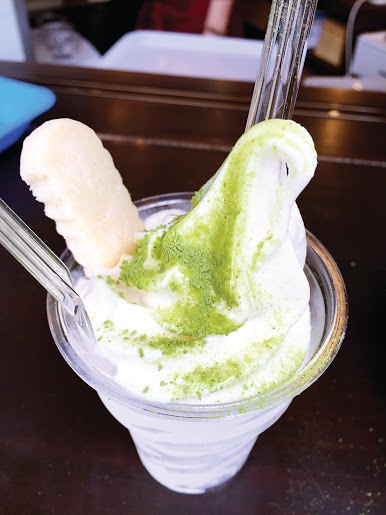 There are plenty of Okinawan specialty restaurants spread across the archipelago, but we particularly enjoyed our meal at Rinken's Kitchen, not only because of the delicious offerings, but because it was one of the few appealing options available near the garish American Village. This unassuming restaurant sits next to the beach and is the ideal place to sample all the local favourites. Between gulps of iced sanpin tea, we tasted the famed goya champuru, a stir-fry of local bitter melon, eggs and tofu. There was a plate of “taco rice” which could best be described as American Japanese fusion with steamed rice topped with minced beef, shredded lettuce, cheese and taco sauce. Our favourite was the incredibly indulgent fried pork trotters, which struck the perfect balance between the gooey stickiness of the collagen and the crisp, well-seasoned exterior skin; my mouth waters just thinking about those crunchy piggy feet. 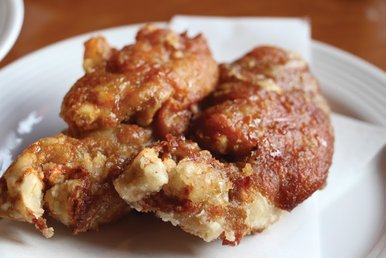 There are plenty of yakiniku restaurants in Okinawa, but Hana stands out in quality. Located in Naha city, it was our first dinner upon arriving on the island. It came highly recommended by friends for the top quality meat, and we were keen to feast on meat grilled over charcoal - the yakiniku restaurants in Hong Kong can only use gas grills due to safety codes. Hana specializes in prime cuts, and one of the specialities is Ishigaki beef. Perhaps less well known than Kobe beef, Ishigaki is also a type of Wagyu –literally meaning Japanese cattle. The cattle are raised in Ishigaki, a region of Okinawa, and the beef is characterized by the fine snowflake marbling that defines Wagyu. Although decadent, Ishigaki beef is full of monounsaturated fat, which helps to lower cholesterol and reduce heart disease. We sizzled and grilled plates of buttery Wagyu kalbi, thin intricately marbled misuji and succulent rounds of ox tongue before concluding our meal with the local favourite – Agu pork. The pork platter was served in three grades, starting from thick slices of almost pure fat, and ending with the leanest cuts. Hana is a carnivore heaven.

Big Fish – Be mesmerized by the three resident whale sharks alongside manta rays and giant trevally at the Churaumi Aquarium. If you arrive during feeding time, you can see these gentle giants guzzle down kilos of shrimp – they are filter feeders just like baleen whales! The adorable dolphin show is equally memorable, so make sure to check the website for show times.

Uncle Sam– The US military bases have certainly instilled their influence in Okinawa culture. For a touch of Yankee kitsch and exaggerated campiness, head to American Village for some contrived Americana. Be sure to dig into a few scoops of ice cream at Blue Seal. Our favourite flavours: Okinawan salt cookies, chocolate brownie and Okinawa Ta-imo cheesecake!

Kokusai Dori – Head to lively International Street to stock up on souvenirs and regional delicacies. Okinawa is famous for its yukisio (snow salt), which contains 18 minerals and is reputed for its sweet aftertaste. The soft-serve salt ice cream at Ma-Suya is a must and be sure to top it off with the various salt powders such as hot chili and matcha! The unusual salt mixture actually accentuates the creaminess of the milk ice cream.

Potting about – An offshoot of International Street is the quiet Tsuboya pottery street, where you can get all sorts of quirky clay works, including the Shisa, a mythical lion dog that guards every house in Okinawa. We particularly love the adorable pottery at Yocchi & Moon, and Cafe Chataro is a quaint little spot to stop for a bite.

Natural beauty – There are plenty of snorkle and dive spots around Okinawa. We particularly enjoyed watching the surf on a stormy day crashing into the breath-taking rock formations at Maeda Point.