This article originally appeared in the latest May edition of Foodie: Jamie's Hong Kong. Read it here!

Look: This gleaming golden-brown chicken was the biggest of the birds (and also the priciest) and is served up in aluminium foil to retain the heat with the sides in paper tubs and then packaged in a substantial box and bag that feels quite luxury and a bit over the top. But it is very effective and travelled the best.

Texture: The chicken was the easiest to cut with the accompanying plastic utensils as it was so tender and buttery.

Flavour: This rustic spit-roasted poultry was perfectly juicy and the roasted potatoes were soft on the inside and crispy on the outside. A wonderful vegetable mix included turnips, carrots, peas, zucchini, broccoli and pumpkin and both sides were extremely generous in portion.

Verdict: There is a reason why their outlets have queues around the block, and might we add that although the queue may be long, the wait is not as they have an efficient system that gets you that succulent chicken before your feathers get ruffled. 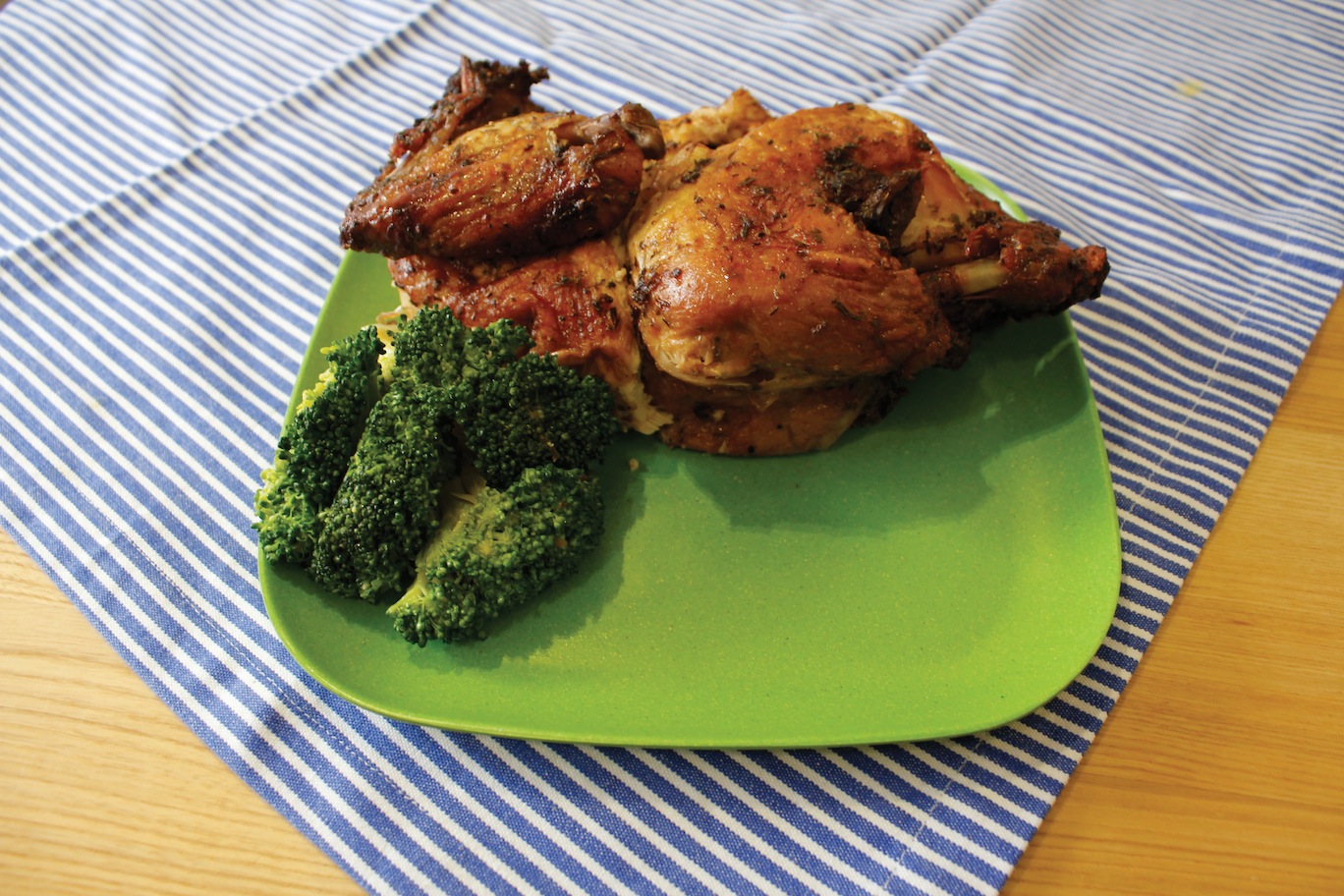 Look: Wrapped up in a plastic clamshell that kept its offering nice and warm. The bird was nearly as big as La Rotisserie and had an attractive herbaceous skin.

Texture: Although the white meat was moist and tender the drumsticks were slightly overcooked and a bit stringy.

Flavour: Tasted strongly of dried rather than fresh herbs so this chick wasn’t our top bird in the taste stakes. The veggie side was a bit boring but there were plenty of other individual sides we could have chosen from.

Verdict: Given the chicken feed price and decent flavour, we would buy this again but wouldn’t put it at the top of our pecking order. 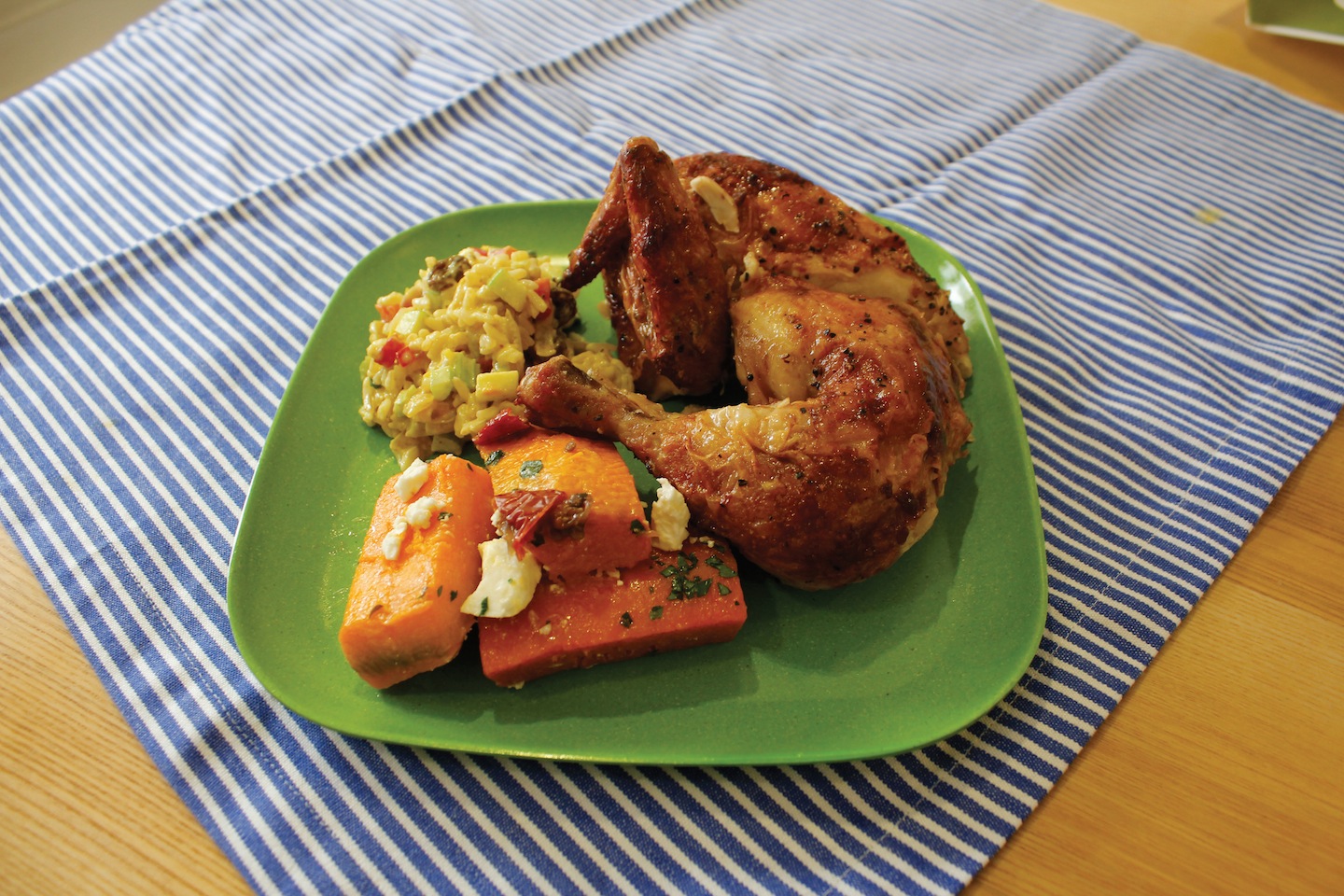 Chicken on the Run

Look: Comes simply in a paper bag that is eco-friendly but not so easy to eat if you’re without dishware. Served up the smallest offering in both chicken and sides, but not price.

Texture: A nice sheen and colour on the outside and moist on the inside.

Flavour: crispy and delicious skin with a natural poultry flavour inside. The extensive selection of sides made choosing rather difficult but we opted for the roasted pumpkin with feta and a delectable Coronation-style rice with apple, celery, raisins, sundried tomatoes and cashews.

Verdict: The best sides for taste and selection and a nice all round flavour on the take away meal but not the best value for money and you may find yourself squawking that you’re still hungry. 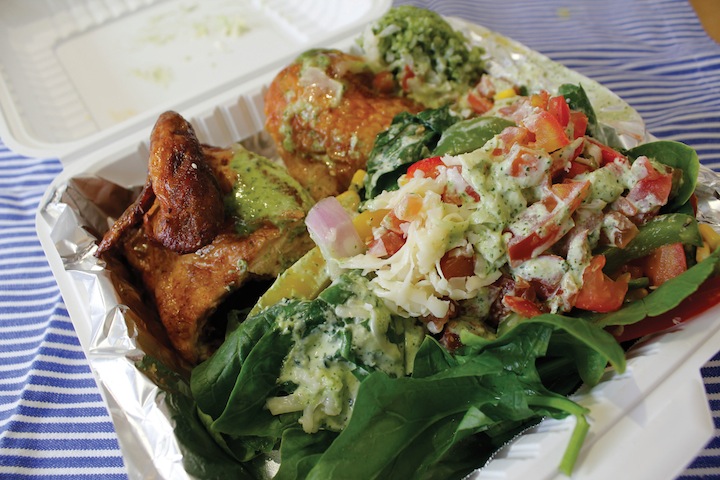 Texture: The gloopy mush of rice was very unusual and the sticky chicken glaze was a little off putting but the bird was a decent size albeit with very tiny wings.

Flavour: It tastes like chicken. Nothing more, nothing less, clean and unmodified but with a slight paprika tang to the skin. Nice enough white and dark meat but nothing special. A very strange selection of sides that all seemed to be Mexican-themed.

Verdict: We liked the calorie count information but overall weren’t terribly happy didn’t feel like it was something to crow about.