Located on Bridges Street and sandwiched between Yardbird and PMQ 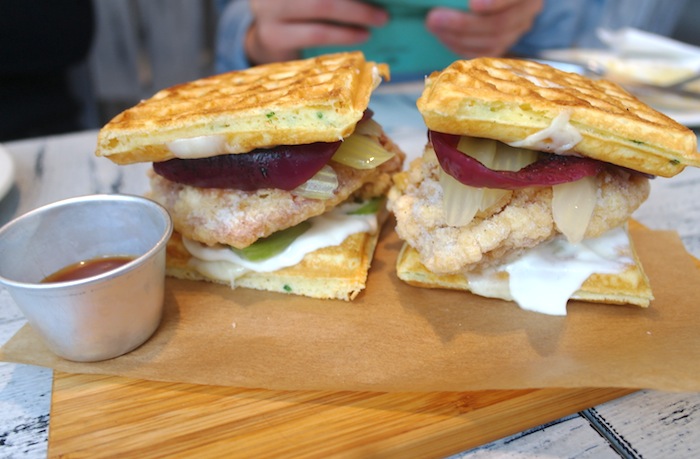 Please note: Head Chef Eva no longer works at Lazy Hog and we can therefore no longer guarantee menu items are the same as when this review was posted. Let us know if you go there what you think!

As is the case with many a buzz word, a collective shudder can often be felt when terms like ‘new Nordic’, ‘paleo’, and ‘fusion’ are thrown about the place. With a desperate attempt to latch onto a cuisine theme, menus are guided more by trend than by intentionality, and the result can be courses that seem awfully familiar to the last restaurant you ate at. What Lazy Hog is serving, although still titled under a neo-nation term of ‘New American’, is innovative, sleek, meticulously thought- through, and some of the tastiest food we have tried in recent memory. 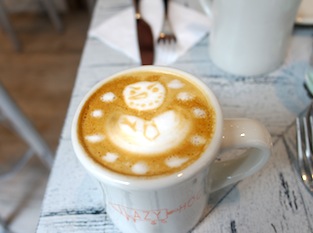 Located on Bridges Street and sandwiched between Yardbird and PMQ is this segmented little restaurant, that comfortably seats between 30-40 people. The chef is Eva Chin, whose background ranges from stints with Shane Osborne in Hong Kong to London’s famous Ottolenghi to five years in the local-produce rich Vancouver. What is to be said of Eva is the deep care she takes in her sourcing and in her methodology. Look up in the restaurant and you will note jars of fermentations, look down and the plate contains buttermilk that has been home cured, and in one’s bowl you’ll see dried local fruit, dehydrated in-house. Many attempt the New American (which, in short, is taking classic flavours like the Philly cheese steak or pancakes and making them more refined, more ingredient conscious and a far sight healthier than their more classic counterparts), but we feel fail by oversimplifying and adding more expensive ingredients. There are no burgers here, nor will you find truffle oil on your fries. These are American recipes, generations old, revised with contemporary focus.

Owners Marcus and Eugene (who notably know precisely what direction they’re taking, being from the West Coast themselves and with vocations as an economics professor and an accountant at KPMG respectively) have carefully curated and designed furniture and settings that reflect the cool of California. Being the founders of Lof 10, they certainly know how to do coffee and they know how to make the vibe of an eatery inviting. They are also the only ones to stock Blue Bottle Coffee, which will cause coffee aficionados from the States to rejoice. A cup of this with the exquisite latte art (something we feel is a horrendously lacking skill in baristas of Hong Kong) will cause immediate ingratiation with sippers. 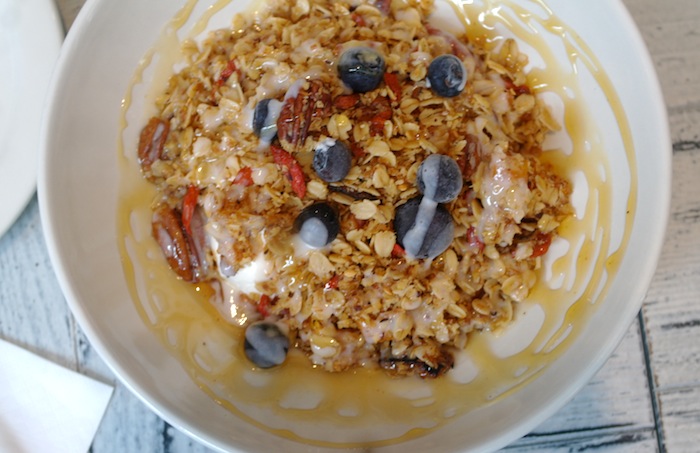 Reading the brunch menu, the immediate reaction was weariness. Ah, house made granola and pancakes. Baked eggs and open-faced sandwiches; we have seen this menu a hundred times before. How entirely misguided this judgment call was, however, as the first course wound its way to our table. The house granola was a concoction thought up by Eva herself, made with aforementioned in-house dried fruit, and specked with lovely surprises like toasted coconut, thick creamy yoghurt, masala infused honey and a frozen blueberry jam centre. With some of us being Australian, we find we have quite lofty granola standards, and in this city often refrain from ordering the morning favourite for fear of disappointment. This one certainly passed the test. 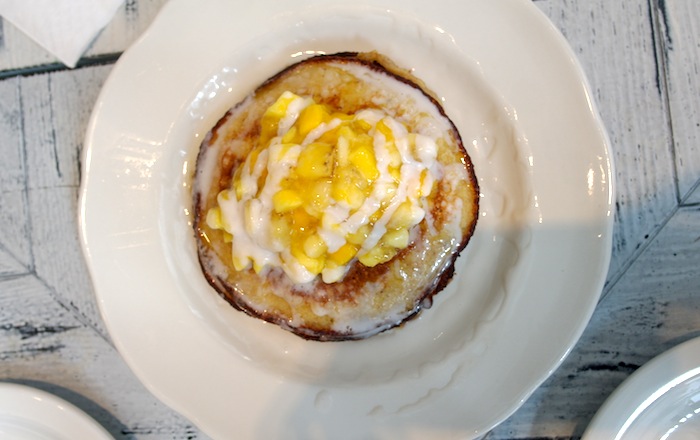 The Hawaiian banana pancakes were a nod to Chef Chin’s heritage, and nod we all did in approval, as we portioned the beautifully fluffy pancakes that can be adapted to any intolerance through substitution of the mere 30% flour in the batter (yay for the gluten-frees!). The bulk of the recipe was made with pureed banana and cinnamon, a popular method with our paleo communities, and an assured route to a light and far less guilt inducing breakfast. We're not even mentioning the salted coconut and banana mango salad that adorns the stack, which completely nullified the poor maple syrup that awkwardly tagged along! 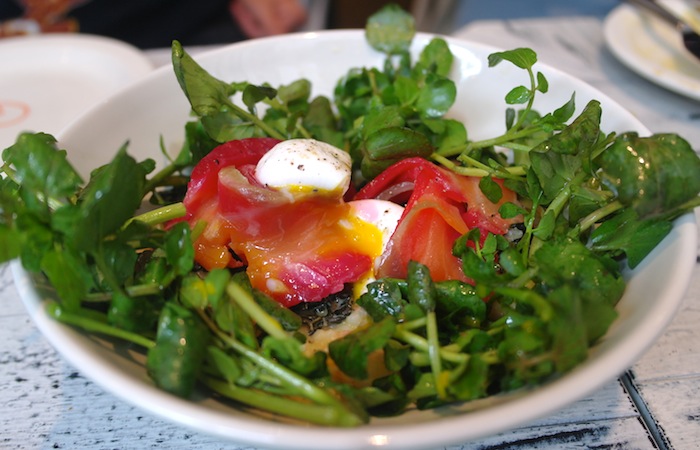 Savouries began with an egg dish; the smoked salmon with braised kale and crushed potatoes. The eggs are perfect and run all over the creamy kale, which cleverly emerges as an evolution of the standard creamed spinach side. As the two mix over the ratte potatoes that form a steady base and are DELICIOUSLY seasoned, we were so distracted that we had no need to pop the salmon on the fork too. Rather, we enjoyed toying with the fresh watercress that comes directly from the Sheung Wan wet-market, 200m away. Locally sourced is a huge focus for Eva and she executes her passions flawlessly. 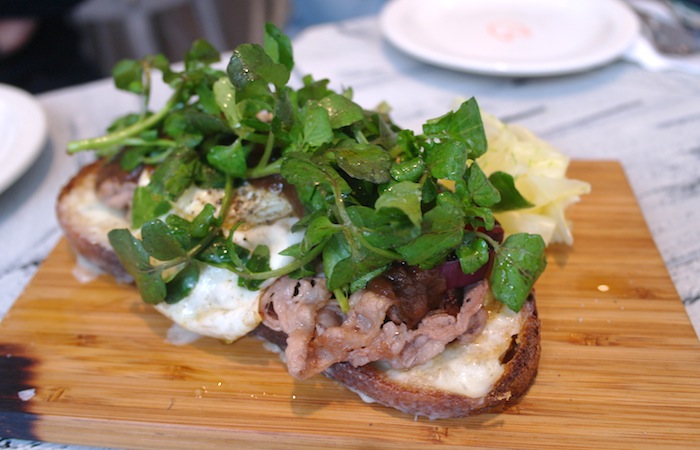 The PHILLY BEEF THOUGH! This was a favourite and perhaps the best thing we have eaten all month. Its foundation is a slice of sourdough from none other than Po’s, with cheddar cheese melted and oozy on top of that, preceding gloriously buttery short rib steak slices, more of that gorgeous watercress, a fried egg, and for us, the pièce de résistance came in the form of onion. Pickled red onion and the most sumptuous onion sauce consisting of caramelised onions, maple syrup and bourbon that have been reduced down and tie all the other elements together perfectly. The pineapple carpaccio that comes standard as a side lifts all the other flavours and makes this, in our opinion, the ideal sandwich.

Finally we try one from the dinner menu, the fried chicken and waffles. These are good. These are really good. Even though we wouldn’t rate ourselves as enormous fried chicken lovers, we really like these. The chicken stays obscenely succulent, dripping its tasty juices over the chive waffle and Jack cheese. We love the chive waffles, and though the Philly beef still reigns as king of the menu in our minds, we delight in this deep southern classic. 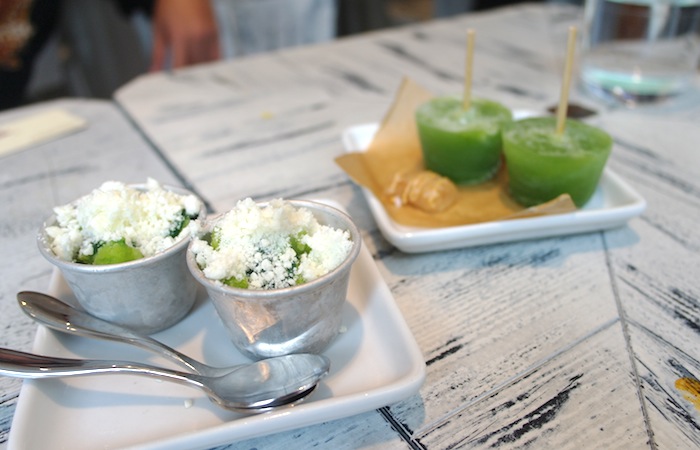 Moving on to dessert, the gin and cucumber popsicles are refreshing, and they’re due to change weekly, which makes for some unplanned fun. The standout dessert for us was the sorrel, as we are big fans of clever herbs replacing heavy cream and sugar based dishes in contemporary cooking. The sorrel consists of a sorrel ice cream, on top of which is layered frozen sorrel, and then finishes with home cultured frozen yoghurt. The yoghurt is fresh, and textured in such a way it resembles a ricotta or mild goat’s cheese. With the sweet ice cream and the frozen, more intense sorbet layers, each component pulls its weight and we think these guys are doing innovative, herb-based dessert better than most fine dining establishments with similar aspirations.

The Lazy Hog has officially opened as of tonight, and they are so centrally located you’d be hard pushed to avoid them if you are anywhere near PMQ over the weekend. We really recommend popping in and trying their brunch and dinner menus. Come in, order everything, drink lots of West Coast coffee, hit a caffeine high, crash down, nap for weeks and then wake up ready for Christmas.