Spanish ham, tapas and sherry can be found at Ship Street 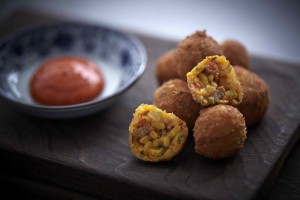 Unable to nab a seat at 22 Ships? You prayers may just have been answered; only a few doors down the block is 22 Ships’ stylish bodega baby: Ham & Sherry.

The 22 Ships team, helmed by hotelier and restaurateur Yenn Wong, chefs Jason Atherton and Lee Westcott (who oversees the kitchen on a daily basis) and general manager Josef Murray, have worked with the world’s leading sherry producers to create Asia’s largest sherry list featuring more than 50 varieties (no doubt about it – sherry is definitely back in vogue). There are even sherry dynamos from the world’s most famous cellar, elBulli. To pair with these first-class sherries, the food menu showcases Spain’s highest-quality aged jamón, from Jamón De Teruel PDO aged 24 months (small $90, large $125) to the jamón granddaddy: Jamón Ibérico de Bellota aged 40–48 months (small $240, large $330). 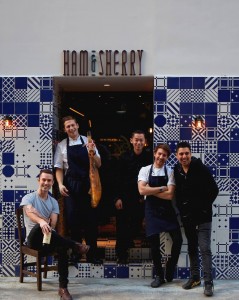 Also available for your eating pleasure are a selection of small sharing tapas-style dishes (such as paella arancini with chorizo and pepper purée and garlic fries with brava sauce; both $68), “on toast” plates (like seared beef with Manchego and rocket; $98) and classic dessert options including crema catalana and warm chocolate mousse (both $48).