Fresh from the Coop: Toritama 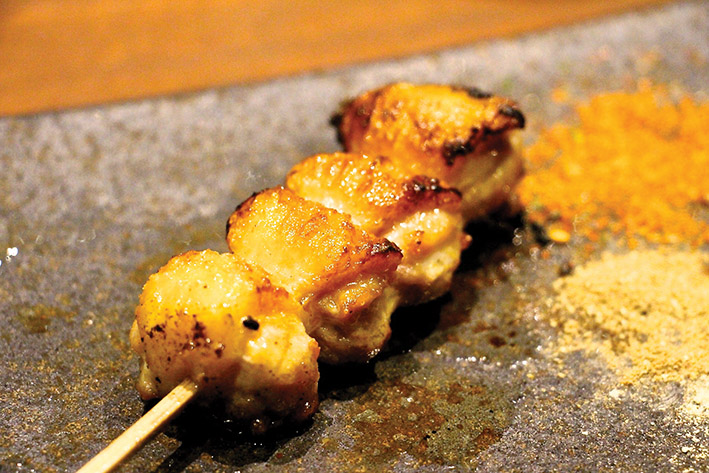 Fresh from the coop:

The new HK edition is a mix of bar and counter seating, surrounding an open grill theatre tailored in modern clean lines and dark wood. The term “yakitori” literally means 焼鳥 (grilled bird), and Toritama’s menu takes diners on a grand tour of the beak-to-tail experience. More than 20 parts of the chicken are currently on offer on Toritama’s Hong Kong menu, with “unusual” additions slowly being added to entice adventurous palates. The yakitori master behind the grill is Hironobu Matsumoto, a Japanese celebrity chef who starred in popular TV programs back in the Land of the Rising Sun.

We decided on the “omakase” 12-course skewers at a tidy $588 per person, and toasted dinner with ice cold glasses of nama-beru (draft beer) and sweet refreshing sake before crunching into a simple salad. First up on the skewer line-up was the chicken tsukune, mini balls of minced chicken with subtle bits of cartilage that gave the flavourful chicken interesting texture. Next, came a velvety skewer of soy-glazed leba (chicken liver) with just the right amount of metallic brininess. The vibrant green skewer of kinshinsai (golden needle flower) was sweet with a subtle fragrance, while the sunagimo (chicken gizzard) made for hearty chews oozing with robust meaty flavour. The misaki (hen’s tail) was indulgently fatty with just a hint of ammonia and crisp, caramelised skin. The peta (thick back skin) was beautifully golden with a slight crunchy skin wrapped around succulent fat, while the negima (chicken thigh with leek), although a predictable combo, was beautifully juicy and charred. The grilled asparagus was crisp and tender while the tokkuri (chicken neck) had addictive crispy skin. The oysters, and the skewers of soriresu (chicken oyster) had tender flesh covered with just the right amount of crispy blistered skin. After a rather ordinary gingko skewer, we came to our final skewer of mitsubamaki (Japanese wild parsley wrapped in chicken breast), which was comparable to the flavours between chervil and celery. We concluded our skewer feast with rich, creamy chicken soup and silky oyako donburi (chicken and egg rice bowl). Our adventurous Foodie palates led us to request an “off-menu” item, the “unborn or undropped” egg, which is the golden yolk of an unformed egg. In Japan, they are traditionally served inside the fallopian tubes of the chicken, but for the Hong Kong crowd, the yolks are skewered like fat creamy orbs. The outside of the yolk was slightly caramelised, with the inside centre still gooey. There’s only one dessert on the menu, and the small ball of dense, richly textured mitarashi (soy sauce) ice cream instantly reminded us of another familiar dessert flavour – the salted caramel!

Verdict:  The best yakitori experience in Hong Kong. We loved everything about the meal, the flavours, the quality ingredients, the refined yet laid-back environment, and the friendly service.