What could be better than trying out a new dining experience and making some new friends in the process?

Pioneering in the sharing economy, hosts Marco and Dalila make supper clubs accessible to all, by opening up their Upper East Side home to friends and visitors alike, in what they have named Casa Maestoso. You can find their dinner available on any of three different websites that promote a welcoming, home environment where strangers become chums and real life is exhibited, Eatfeastly, Cookapp and Eatwith. 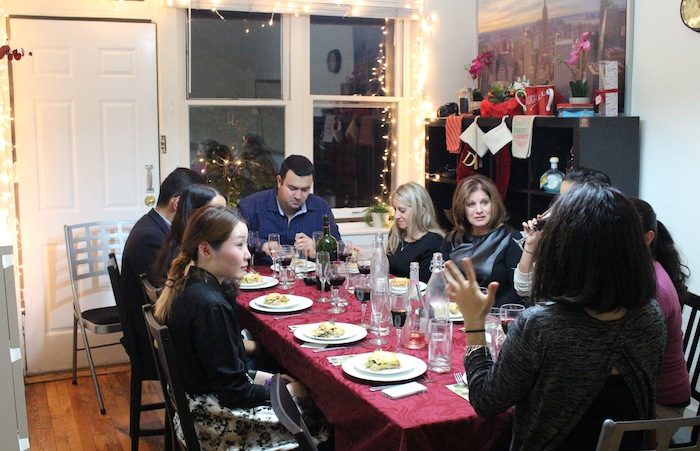 Focused on striking the balance between traditional recipes and modern interpretation, this couple have combined their skills to present Dinner at Casa Maestoso; an Italian themed and run company/brand that embodies Italian flair, friendliness and presents some stunning flavours.

If you’re not familiar with supper clubs, or the food sharing economy, and are a travelling (or single location bound) foodie, then this is certainly something you need to look into. Though slow to take off in Asia, the “Airbnb of dinner” makes connections between hosts and the visitors/locals of the metropolitans around the world. Particularly popular in Europe, America and parts of Latin America, the concept builds on the idea of vanquishing the ‘stranger syndrome’ that is prevalent in the world of today. Fearful of those we don’t know, there is a tendency to avoid uncomfortable/initially tiresome encounters for dinners with only those who are known to us, to the neglect of forming new friendships that comes with it. Organisations like Eatwith and Feastly employ a simple interface that requires a date, a city, and a cost, and instantly the options are presented.

Say you want to spend between $30-$50 (the cost of an average two to three course meal in New York city), are staying near Central Park and have four days of potential dinner options, these website will filter the choices that suit you, and after a review of the host and the cuisine style, a credit card payment system confirms your place! On the night, you show up to the address, usually a person’s home, and enjoy what is usually a lot more bang for your buck, in the enlightening environment of a local home. This is the kind of authenticity that no restaurants can offer, because the setting is exactly the same as being invited to a close friend’s home, with accompanying warmth and engaging conversation. 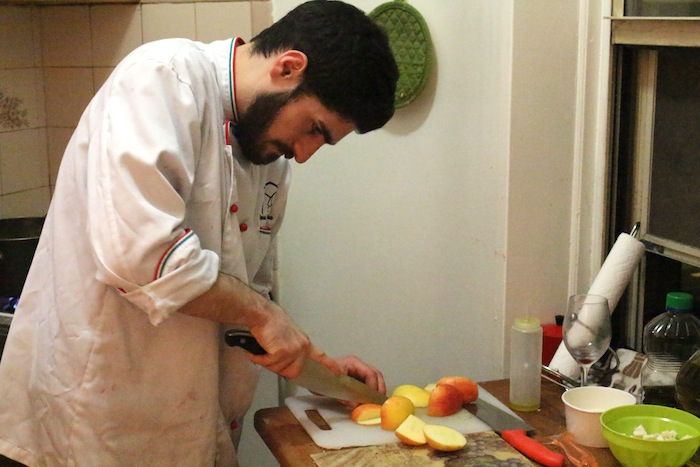 We partook of a dinner when in New York on a recent trip that reiterated the joy of making new friends and further educated us, in far more rigorous depth than we would have been able to glean ordinarily, about the nuances of food culture in New York. Marco Maestoso was formerly a chef in Manhattan, and Dalila, a food writer in Rome. They offered a sumptuous four course meal ($45) on a chilly winter evening to eleven enthusiastic guests who varied in origin from the Ukraine to Australia.

Beginning with a vegan pumpkin and ginger soup, we were warmed from the inside out, and enjoyed the nutrition from the vegetables bought from the locals farmers markets who occupy Union Square most days (a tip we were not privy to until this dinner…useful!).

Second was a classic with a vegetable spin, a broccoli and courgette lasagne. The cheesy topping and silky kiss of the tomato béchamel, that was housed in each layer of pasta, was sublime in the cold weather. 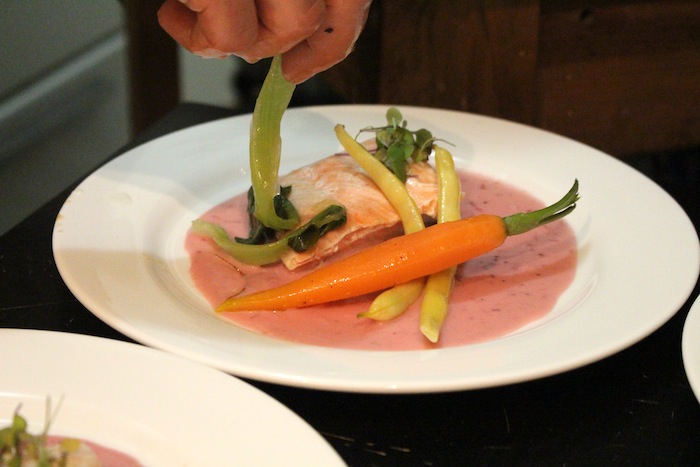 Our final main took the form of salmon from Canada cooked sous vide with an unusual but well complemented coconut, cranberry and pomegranate sauce. We would have never contemplated combining those flavours, nor would have thought we would see the day the sauce out-pinked the salmon, but all surprises impressed and the salmon was cooked perfectly, thanks to that delightful controlled cookery method that is no longer restricted to the professional kitchen only.

The finale, another long-established Italian staple, tiramisu with a twist! A blueberry granola substituted for the characteristic soaked ladyfingers; the typical mascarpone topping was enhanced with the addition of whipped egg whites with tiny amounts of sugar to form peaks of the fluffiest, gently sweet cream we could imagine. The meringue-like layer sang of berry, with the blueberry compote subtly incorporated into the almost-parfait-dessert, making it perhaps our favour course, and we had no problem engulfing huge quantities of it. 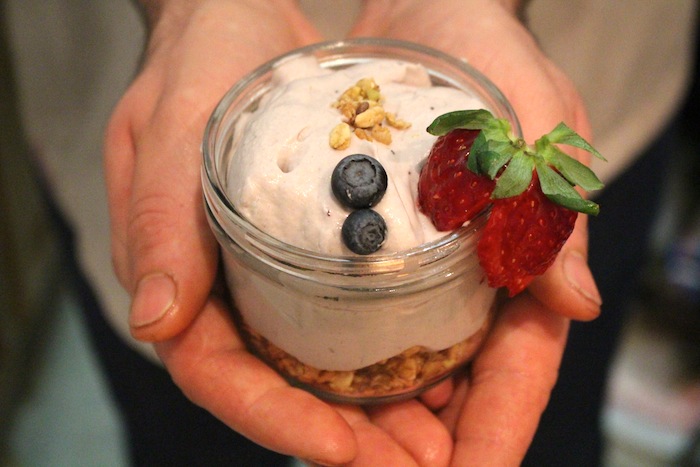 A smooth Merlot resided over our table in an enormous vessel of a bottle, which was fine social lubricant for a variety of topics, from New Year's resolutions, to the standards of tipping across the world, between all of the new friends gathered. Of the ten people assembled, only four had met prior to the evening. What was delightful about this was that numbers were swapped, handy restaurant and musical info exchanged, and such was the level of enjoyment of the evening that some people just wouldn’t leave (us).

In the thread of thinking that promotes a “one less stranger” mentality throughout our ever-increasingly globalised yet detached world, it was a pleasure to amble from the home of a complete stranger with new friends and buoyant spirits astride. In an entirely fair transaction, chefs around the world are given greater opportunity to express their creativity, explore and experiment outside of more old-style bistros, whilst guests are given the chance to enjoy a meal that comes with the opportunity to interact with the very people of the city you have come to learn more of, an enhanced knowledge of a society and food culture, and a bunch of new friends, at no extra cost.