From K-pop, to drama, to cosmetics, to Korean cuisine, South Korea’s cultural allure is tantalising and ever-growing. Korean food has been in the spotlight of the local food scene in the recent years. Korean TV shows have also proven to be a runaway success in Hong Kong. So what could be better than both Korean cuisine and Korean stardom? A combination of the two. 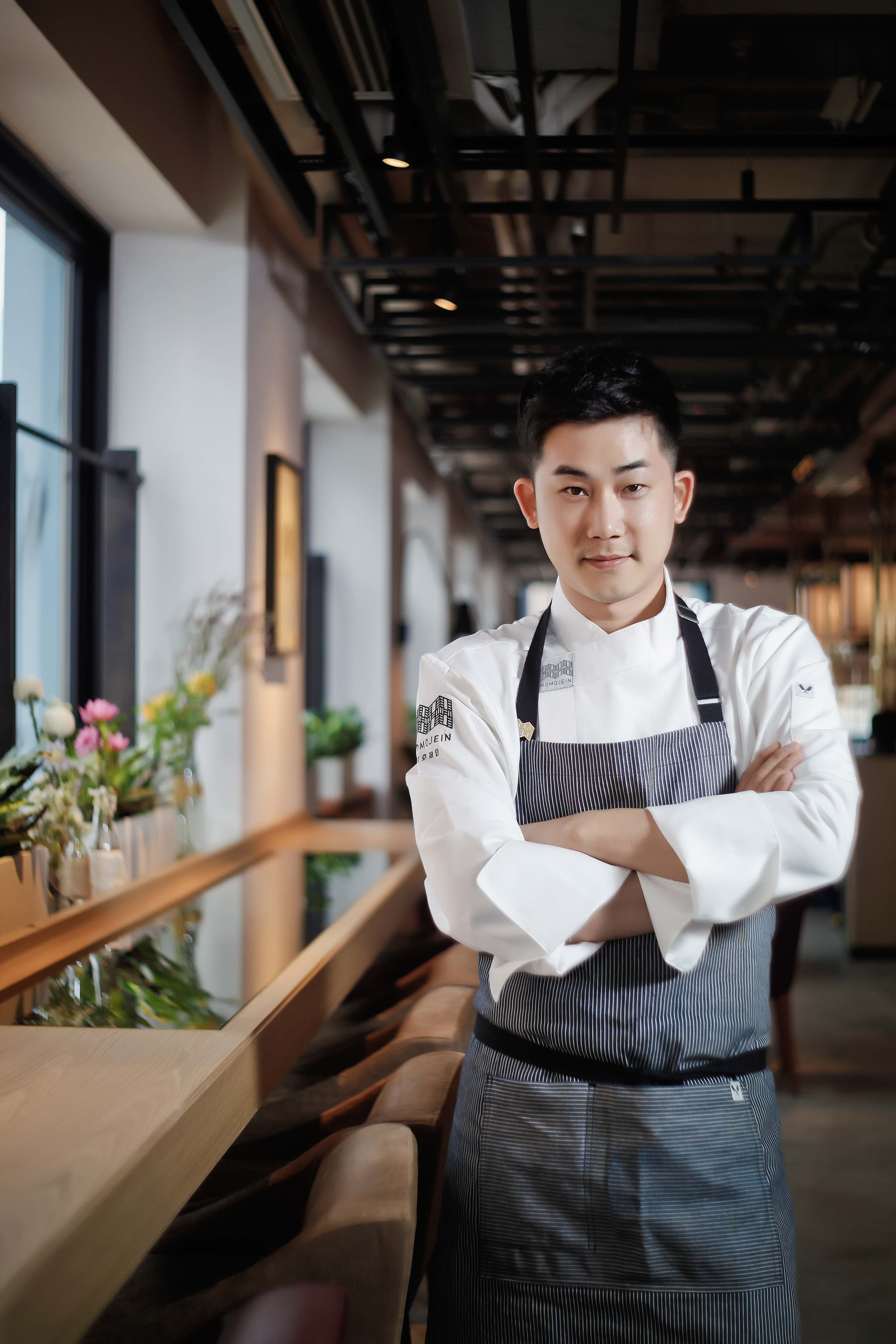 Nestled on the 23rd floor of the QRE Plaza, just across from Hopewell Centre in Wan Chai, MOMOJEIN is a new Korean restaurant that produces traditional Korean dishes with a contemporary and more refined take on them. It also houses Korean celebrity chef Lim Hee Won, an experienced chef who has spent over 10 years in the industry and has been featured and crowned as one of the top star chefs featured on Korean cooking shows. Good looks and a down-to-earth nature have earned him a sizable group of enthusiastic supporters back in Korea and Hong Kong looks to be next to join the fangirl team.

Of course, MOMOJEIN has much more to offer than that alone. The restaurant combines a modern interior design with natural elements. It gleams with natural lights thanks to the huge panels of windows across the restaurant. The designer also did a great job in creating a clean, minimalistic yet elegant environment by using a combination of black, white and wood decorations. 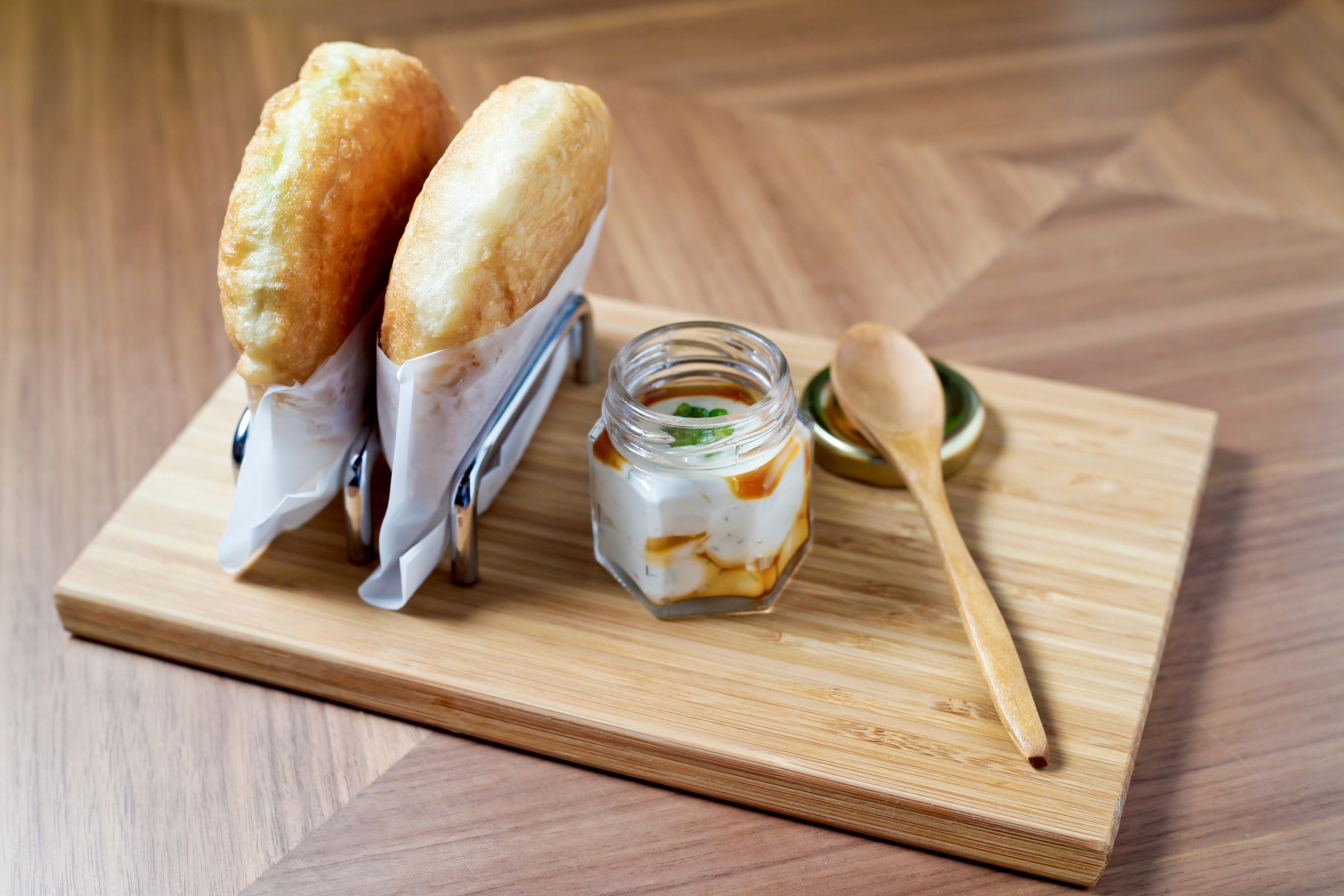 To start with, the kalbi hotteok ($82/piece) is a must-order. Traditionally one of the most popular Korean street foods, MOMOJEIN abides by its inventive philosophy and takes the usual sugar and cinnamon filled crepe bun and stuffs it with savoury, succulent beef instead. The crepe bun, made of glutinous rice, is also crispy and chewy. The dish was wonderful just by itself, but the ranch and teriyaki sauce paired with it really helped to take it to a whole new level. 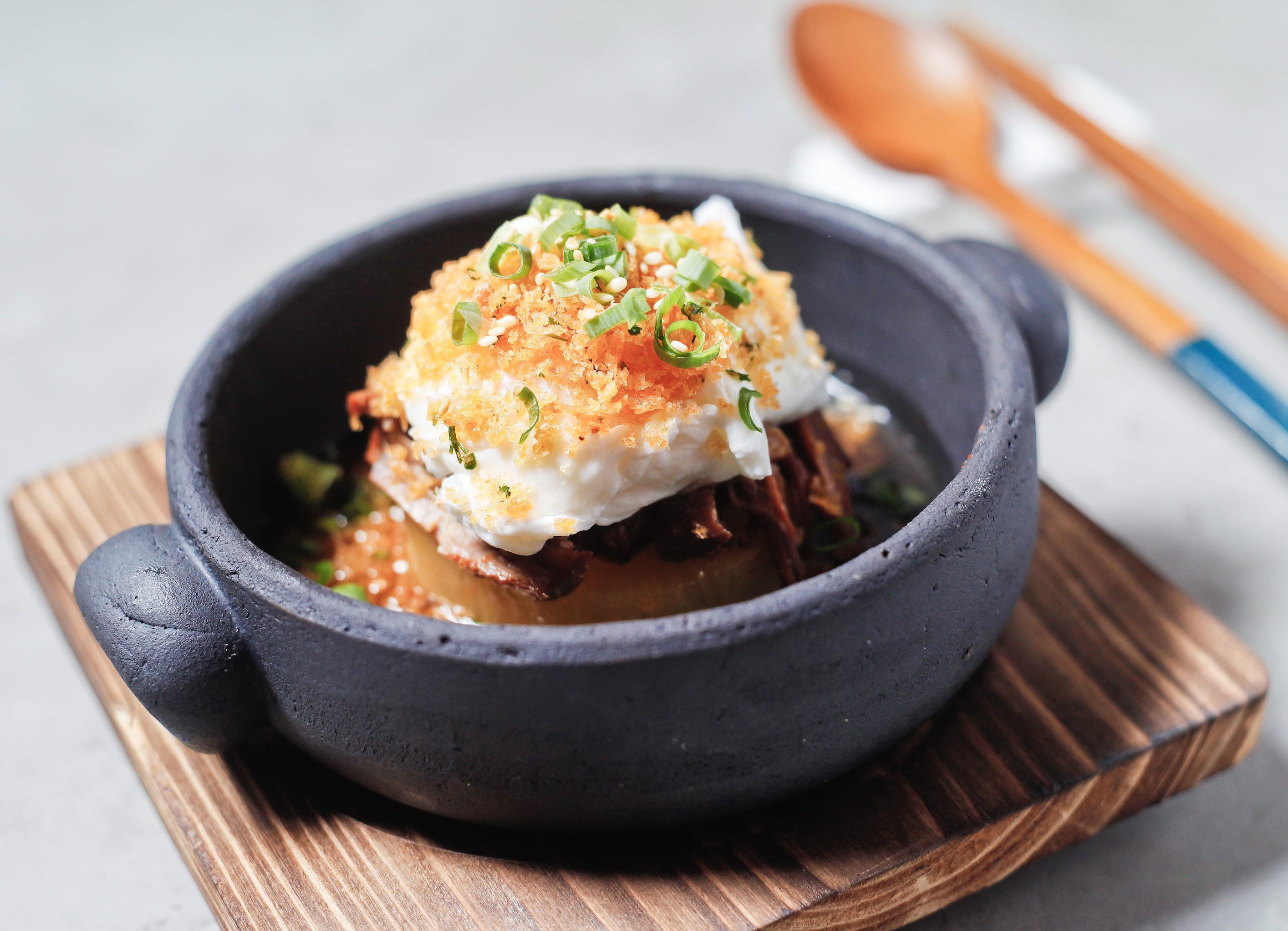 The beef and poached egg ($78) was delightful too. While the name seems rather unassuming, the dish imparts a strong, wonderful flavour. A runny poached egg is always an aesthetically pleasing sight and the shredded beef is sweet and tender. The highlight of this dish lies in the white radish. Stewed in a mixture of sugar, soy sauce and thick vegetable broth, the radish absorbs the essence of the dish and is incredibly delicious. 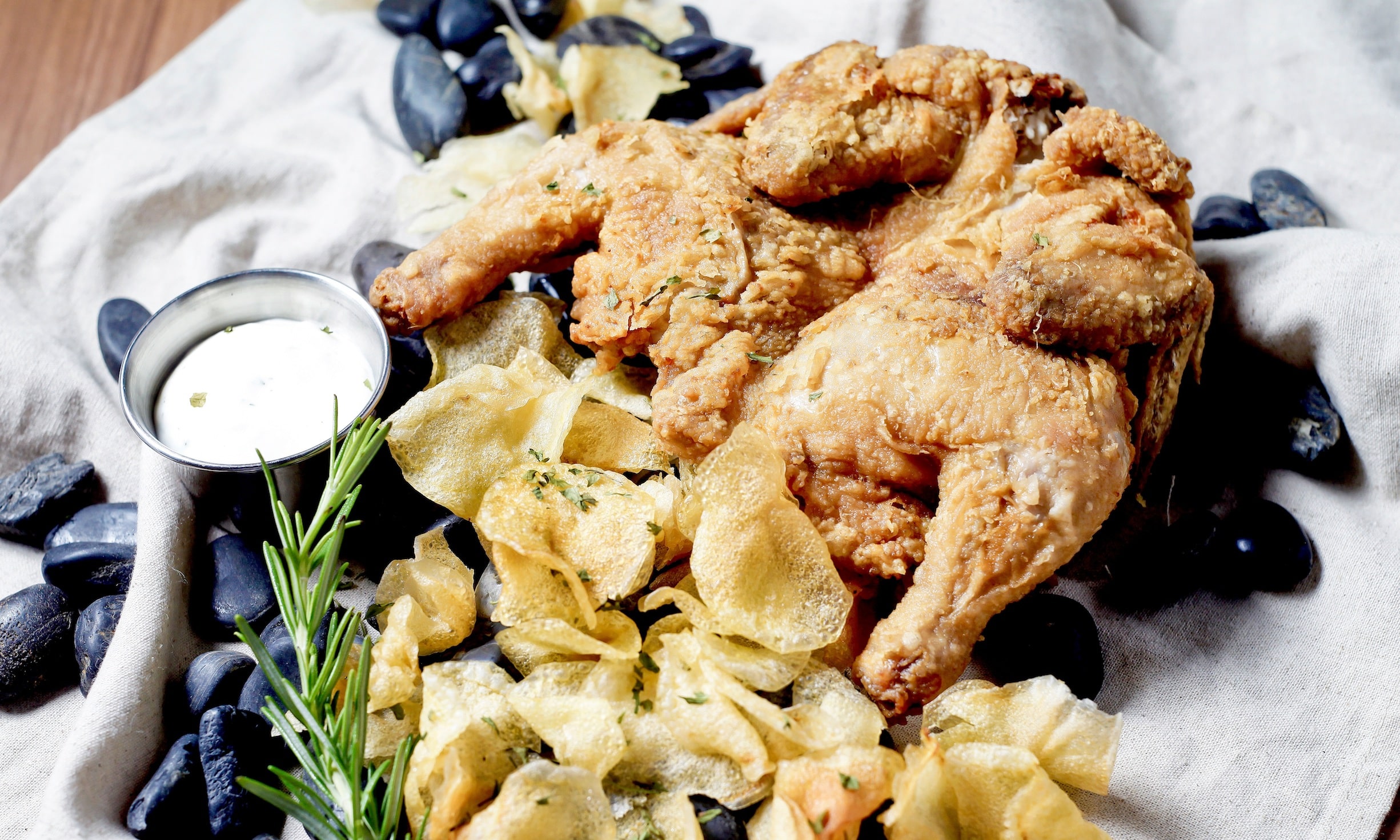 Fans of fried chicken will absolutely adore the country fried chicken ($230). Yes, we’ve all been a little worn down by the craze about Korean fried chicken ever since “My Love from the Star”, but trust us on this, and give this perfectly fried, juicy chicken a try and you might just fall in love with this comfort food all over again. What makes the fried chicken here stand out from the rest is its marinating process. Using a chicken broth made from a handed-down secret recipe and marinated for 6 hours, the chicken was incredibly tender and overflowing with juice. 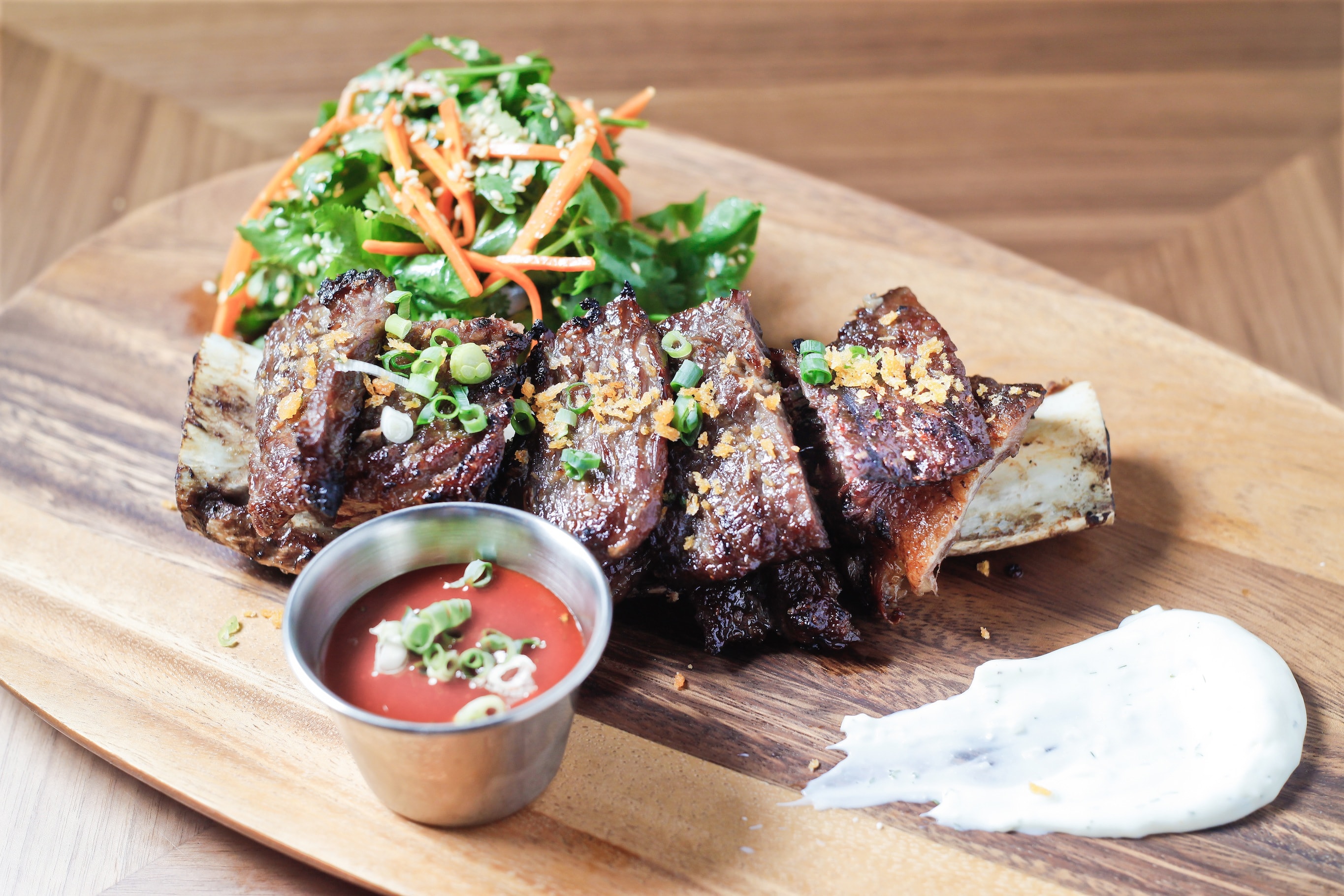 The Whole Kalbi & Coriander Salad ($340) was also well executed. US prime ribs marinated in yet another secret recipe barbeque sauce and served with a coriander salad on the side. The choice of using a coriander salad is unusual but the unique scent of the coriander came out to have a particular affinity with the soft and aromatic beef.

Verdict: With wallet-friendly prices, a modern and relaxing décor and most importantly, great traditional Korean dishes revamped with inventive techniques and ingredients, MOMOJEIN is sure to become one of our favourite casual hangout spots. Don’t miss out on the weekday set lunches too. Good quality Korean food with a price averaging 90 dollars is a deal that cannot be matched.