Chef Marc Vidal is the man shaping the food in the Boquerias here and in the U.S.

You will know Boqueria’s Hong Kong hotspot known for its reasonably-priced brunches, great sangria and its good time atmosphere. Chef Marc Vidal is the man shaping the food in the Boquerias here and in the U.S.

Marc’s first cookery experience was at his family’s restaurant in Barcelona where his grandmother was the chef. He would spend his after school hours helping out and that’s when his love of the trade was burned into his food-loving soul.  After graduating from the Escola de Restauracio I Hostelatge de Barcelona, Marc worked with some of the world’s leading chefs including Carles Gaig, Ferran Adria and Alain Passard at the three Michelin starred restaurant, L’Arpege in Paris.

Five years ago, Marc joined the Boqueria team as Executive Chef where he contributes his wealth of experience and culinary talent into maintaining and enhancing their menus for the cuisine of his homeland in the New York, Washington D.C. and Hong Kong restaurants. 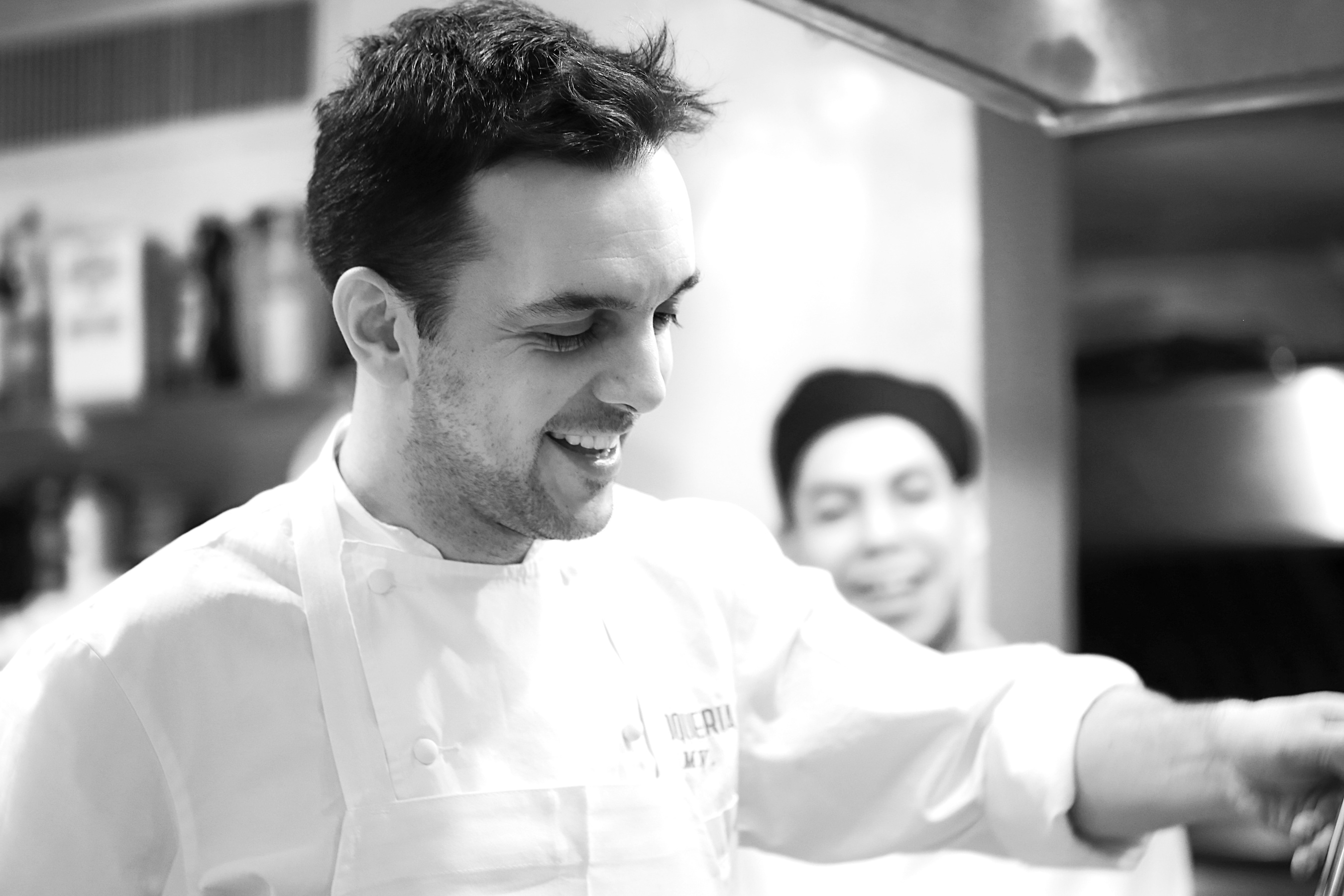 What makes New York a great place to cook in?

It is the capital of the world and particularly the culinary world, so you can learn a bunch from other cuisines and learn the value of other cultures. Thailand, China, Spain – it’s all there.

What makes Hong Kong a great place to cook in?

Well for the same reasons as New York, but in a different part of the world. It’s the capital of Asia, it’s a melting pot, and it has that same energy. It is also ultra-competitive, filled with decisive, high- quality people who correspondingly want quality food, which causes you to push yourself.

What is your favourite thing to cook?

Seafood anything really, and and as much local stuff as I can get my hands on. For example, there is very nice squid in New York, and cuttlefish in the UK. The problem is, the people are so used to eating the likes of tuna and salmon, that everything gets exported, so they miss out on the bounty of their own region. Fortunately, the tide is beginning to change and they are being a little more adventurous. I like to cook food that encourages this.

What is your favourite thing to eat?

Seafood, any kind, as long as it is good quality. In New York, Roberta’s (Italian) pizza and Italian food.

What should people order when they come to your restaurant?

Paealla for sure; the constantly changing options on the tapas market menu; classics like patas bravas, mushrooms, and sangria.

Do you have any tricks when it comes to cooking Spanish food?

Use a LOT of olive oil and a LOT of garlic; with those two ingredients plus onion, which is what we call a fritto, we form the base of most of our cooking. 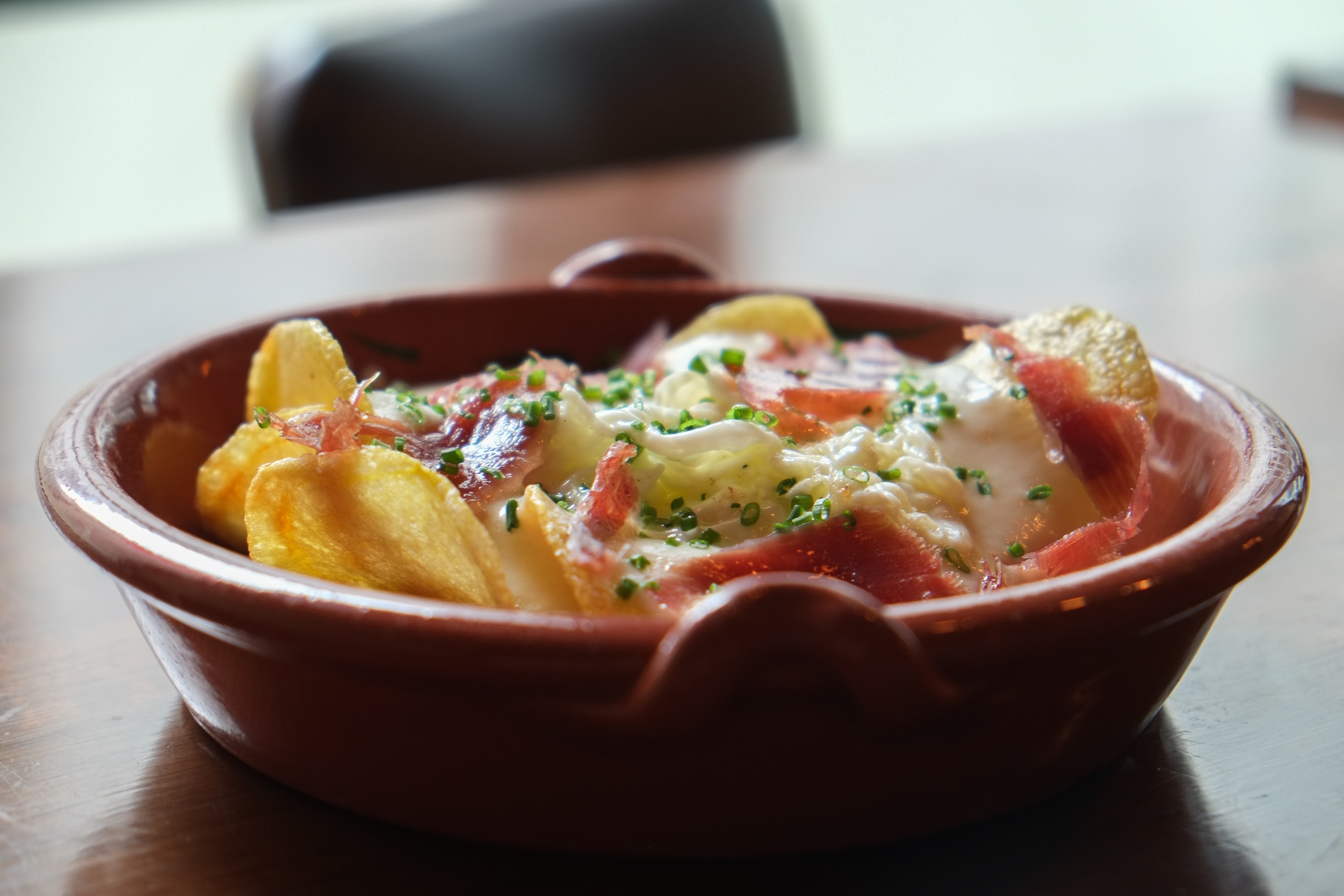 What do you find most rewarding about cooking in New York City?

It means I get to live there [laughs].

What is the greatest challenge with cooking in New York?

We’re seeing a lot of chefs go local with ingredients for a lot of reasons; do you feel like you need to do the same?

For me that is exactly what we do in New York, and that is what Hong Kong should be doing as well. A market menu, like what we offer, is the place where we can put all the regularly changing local stuff. Base menu items can also learn to incorporate local ingredients. Using local produce as much as we can is the goal.

Where are your favourite places to eat in the world?

Spain for sure; all over but in particular San Sebastien. Mugartiz is an amazing restaurant.

What do you think of the Spanish food in Hong Kong?

To be fair I have not tried a lot of it. So that being said, I really like Boqueria [laughs]. Very traditional Spanish is what we have here and I think if a Spaniard walked in, they would expect that. However, we are in HK and NYC, and therefore it cannot be rural cuisine, so we need to adapt a little bit.

What are your favourite restaurants in New York?

Robertas; a New York institution. Estella, which is an Italian restaurant opened by a guy from Uraguay; it is super simple and always consistent. And I also love to try any restaurants that are doing new South American foods. 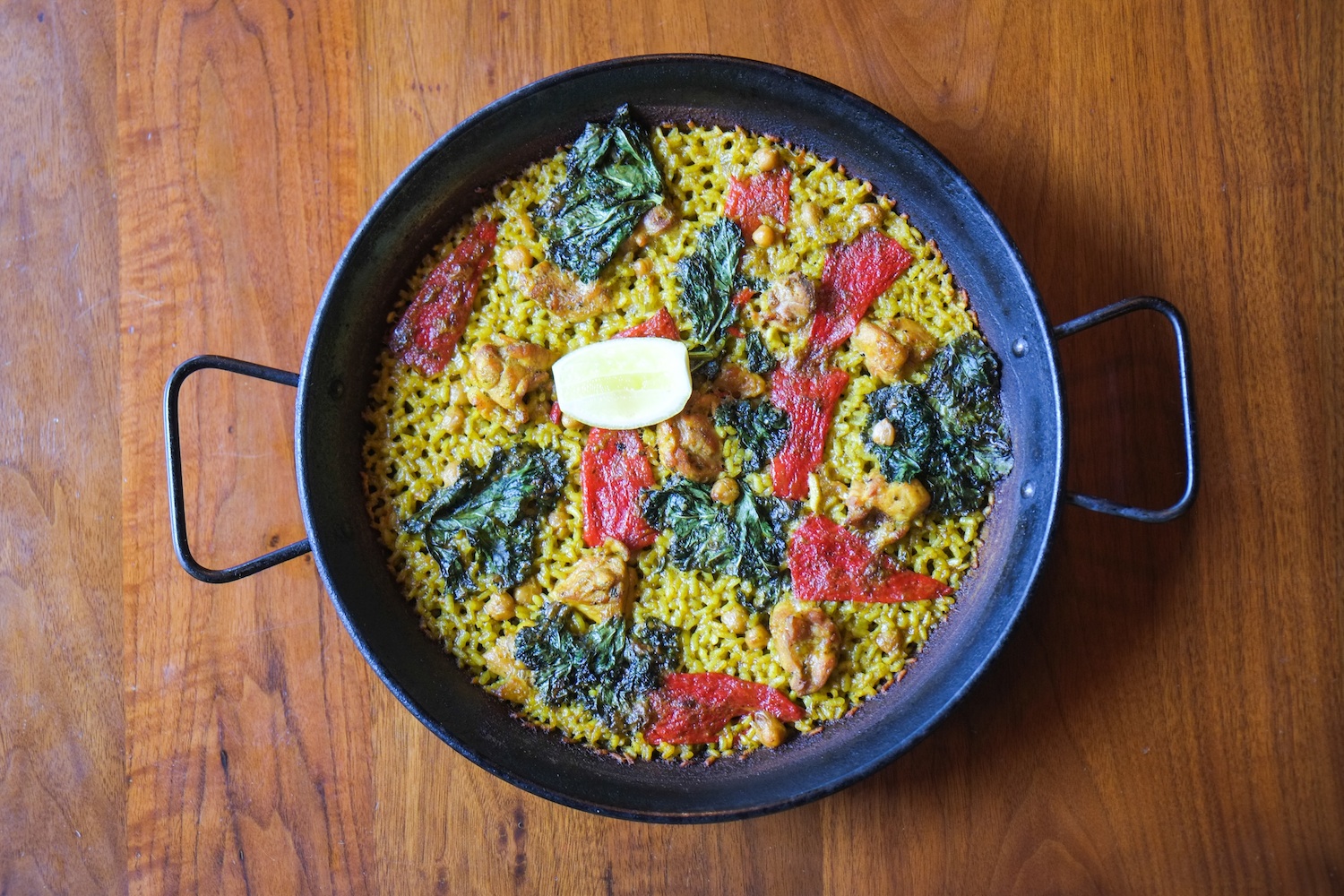 What do you love about Spanish food that is often overlooked?

Spanish food is very simple. Our cuisine is very much about seafood, and should be about seafood, because seafood in Spain is some of the best in the world – our oysters are the best, our shrimp is the best, our pork is the best. Getting those products can be a challenge, but it is then the responsibility of the chef to only tweak these ingredients so they stay true to form. That is something Spanish chefs need to keep in mind.

How do you feel about desserts and which is your favourite on Boqueria’s menu?

I was a pastry chef for six months, so I feel quite connected to the sweets section. In NYC and in Hong Kong, we have a French toast dessert which I really like. It has a great balance of textures being both crispy outside and soft Brioche inside, both hot and cold. With a sharp yoghurt and berries, it’s fairly great.

Who are your chef idols?

The El Roca brothers; they are from Catalunya and they have done so much with what they have. I would not cook their food necessarily, but I love their what they have been able to achieve. Also the guy from Estella, the Italian restaurant in NYC, inspires me a lot with his passion.

You can only cook with three ingredients the rest of your life; what are they?

Olive oil. Arbequina olive oil. They are little bit bigger and the finish is a little stronger.

What do you think about Chinese cuisine?

To me it is one of the top cuisines in the world because of the variety; there are so many different versions of dishes from different regions in China, and every place has a really different take. I would honestly rate it in the top three in the world.

What are your favourite restaurants in Hong Kong?

Ho Lee Fook and Carbone. Of Carbone, I can genuinely say the quality remains the same in both New York and Hong Kong. 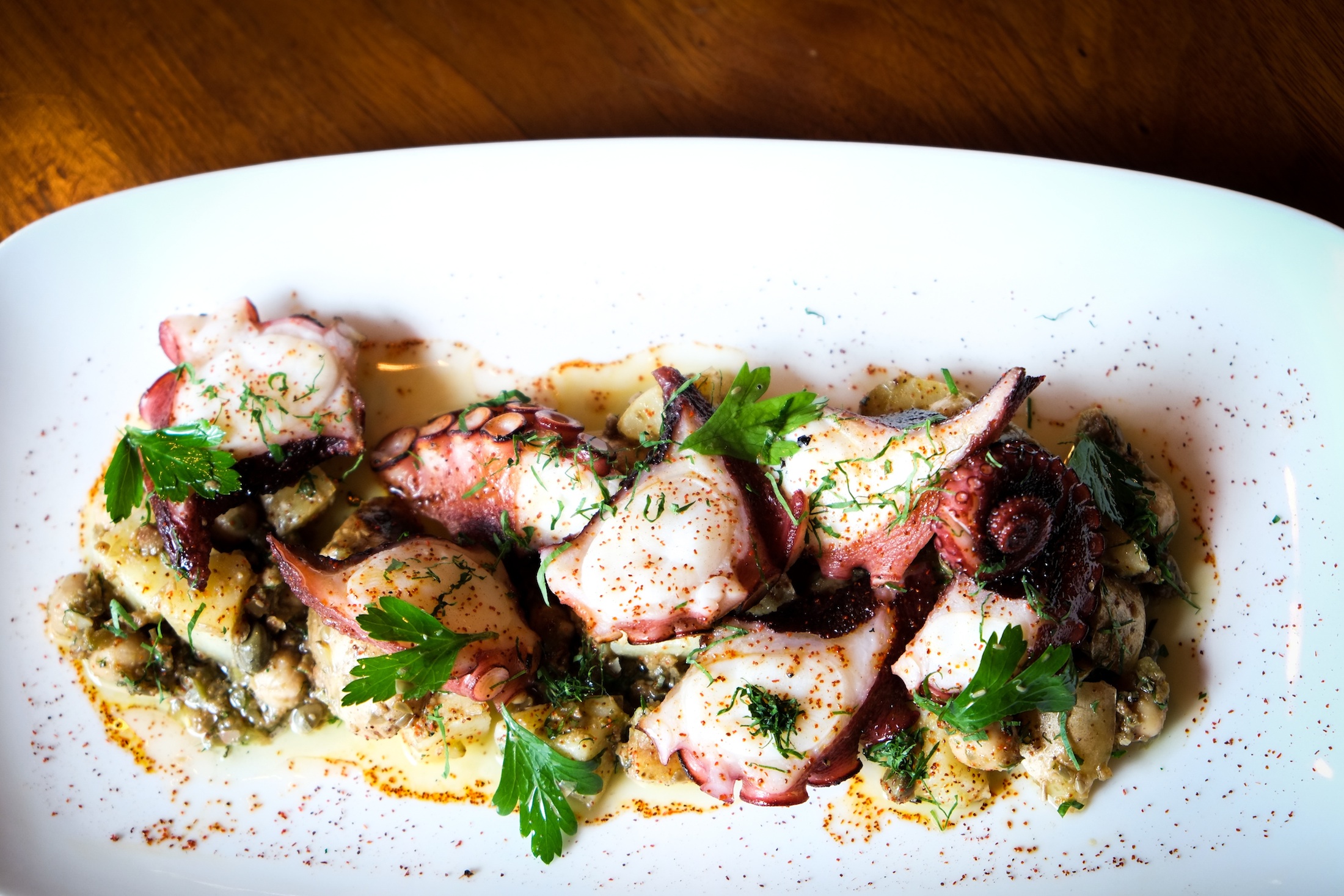 What’s in your fridge?

Cheeses (French cheese and some Spanish because the suppliers are always giving me samples). A whole octopus, pickles, short ribs, vegetables always, jalepneos and herbs. Lots of herbs. My balcony full of herbs back home.

Having worked for Alain Passard, Alain Ducasse and Ferran Adria, who would you say influenced you most and whose technique did you most adopt?

I learned from all of them a lot. Adria when I was there it wasn’t as molecular as he is lately. I learned a lot of traditional Catalan and Spanish cuisine from him when I was there, in a way that no one had been able to achieve before.

I really like Alain Ducasse’s focus on the vegetables and I was there when he was just moving to this type of cooking, which was again entirely new and very educational.