Modern Shanghainese with a touch of the dark arts

Magic is in Macau these days, within Studio City that is.

Situated right next to the House of Magic show within the hotel is Shanghai Magic and despite its moniker actually reveals a beautifully designed and opulent restaurant that relies very little on kitschy tricks up its sleeves and instead wows with its impressive modern Shanghainese cuisine.

With subtle odes to the art of illusion the dark and romantic restaurant features a couple of paintings with images like butterflies that lightly flutter their wings from time to time and two private bird cage tables with privacy curtains for secretive meetings, that blend in beautifully with the theme without being over-the-top. There are a few hokey elements, like the bathroom mirror that says hello and tells you you're beautiful, but then, who doesn't like a bit of flattery when powdering one's nose? 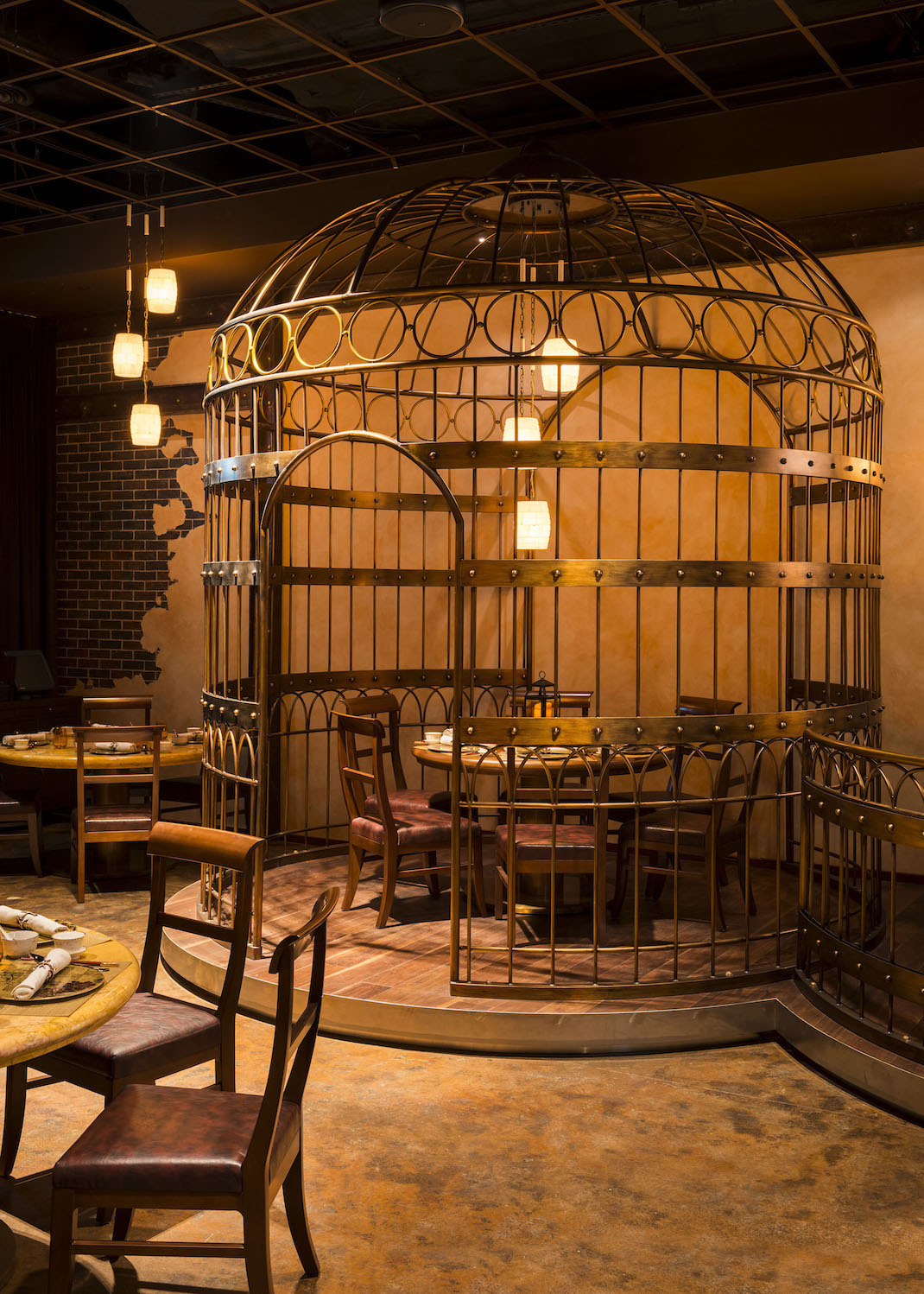 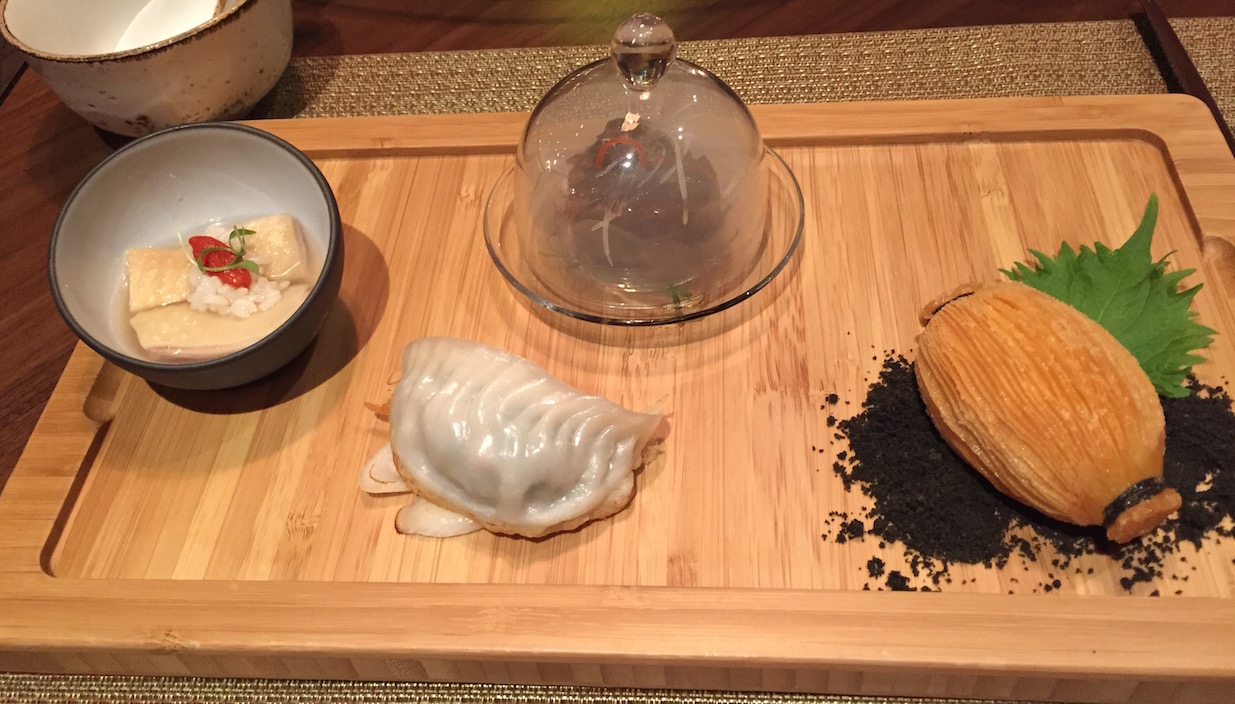 We began with the chef's signature amuse bouche, a watermelon jelly containing pop rock candy that was sweet with a pleasant vinegar taste that was delightful. We then sampled the starter platter with a dumpling filled with sour and spicy soup that took our breath away while the drunken chicken soaked in two Chinese wines had a sweet flavour and perfectly firm yet juicy texture.  The deep fried cuttlefish pastry was crispy and flaky on the outside and moist with the juices of the fish inside. 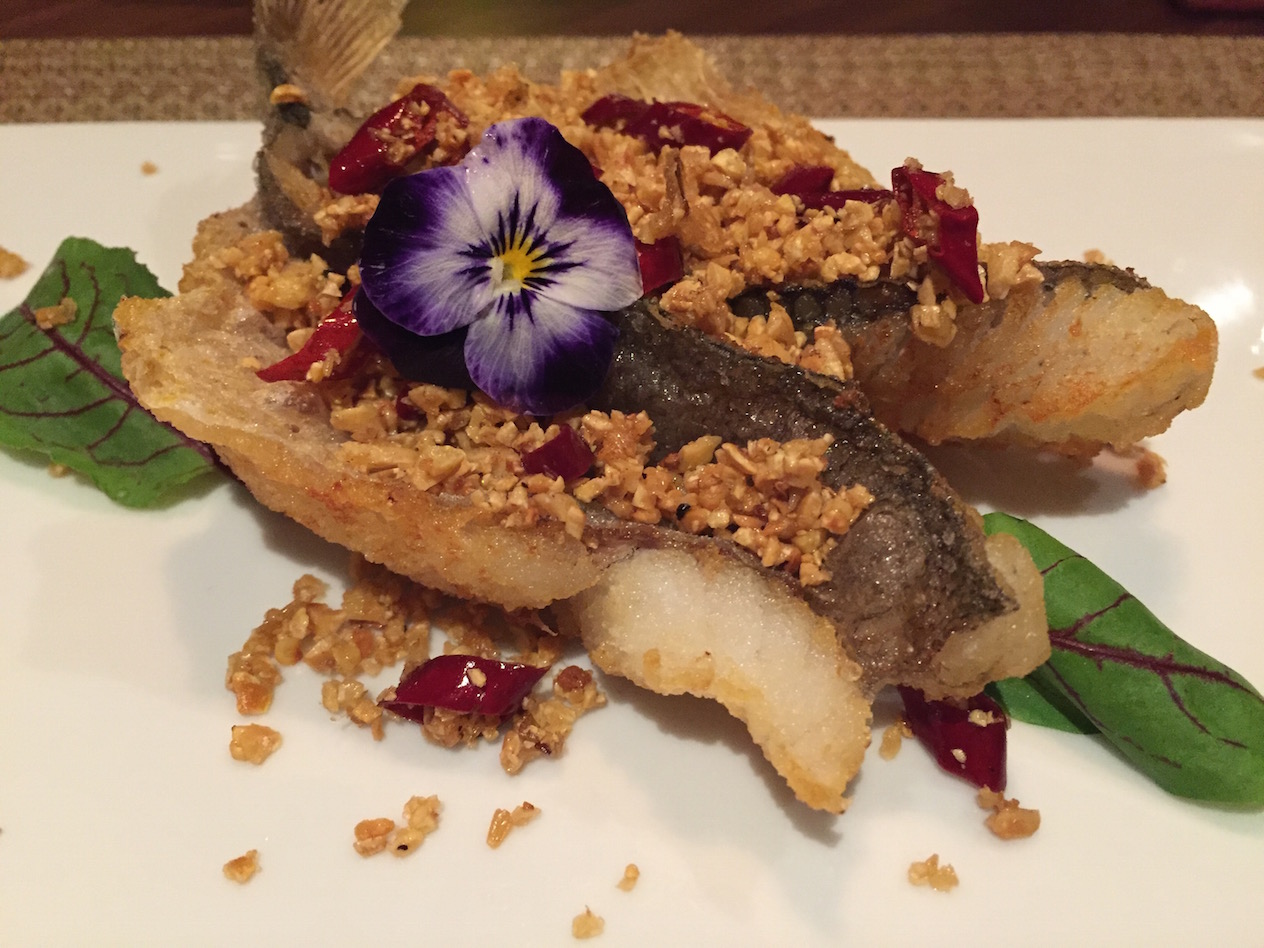 The dried chillies added a subtle hint of flavour to the fried yellow croaker fish decorated with edible flowers and a spattering of crispy soybeans that add another interesting textural element to the simplicity of this spectacularly presented dish. 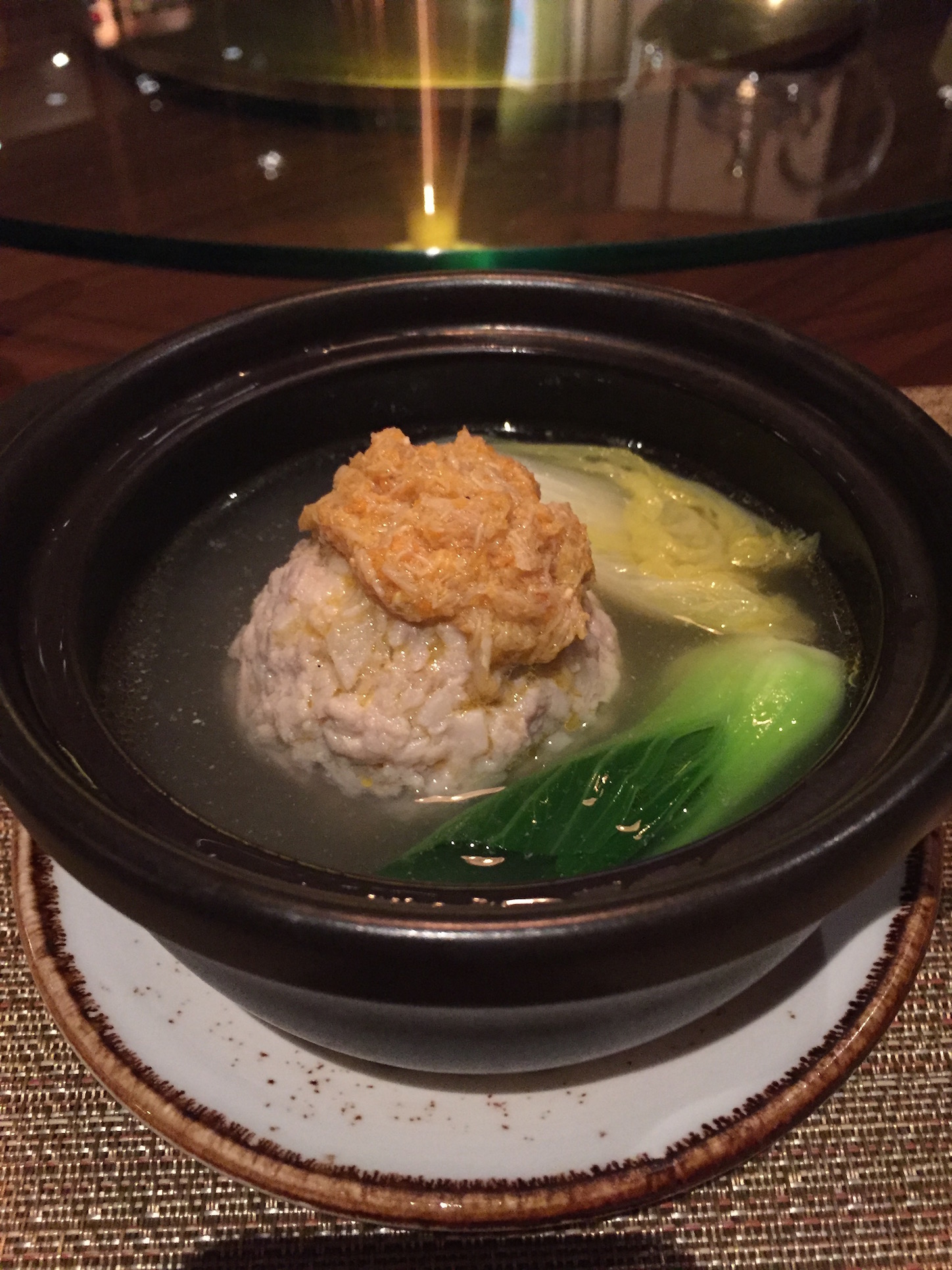 One of their signature dishes was this giant boiled minced dumpling in hairy crab and roe in superior broth and while individually we enjoy all the elements involved in this dish, altogether was a bit overwhelming on the senses and ended up not being our favourite despite its impressive preparation. 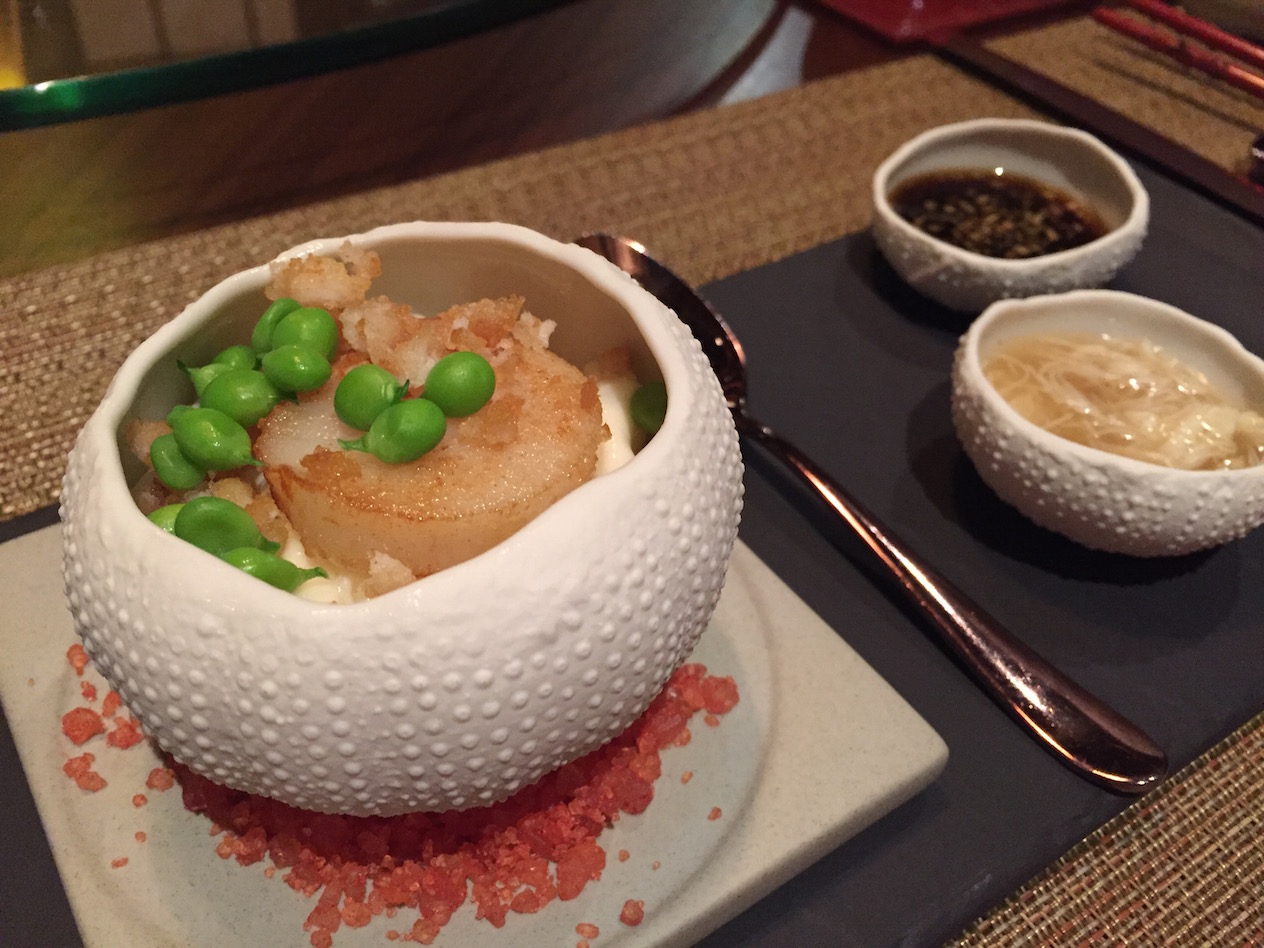 The marinated cold bean curd with young soy beans was topped with scallop and the combination was a rich mixture of flavours with a strong density for an unassuming dish presented with a creative composition that we enjoyed. 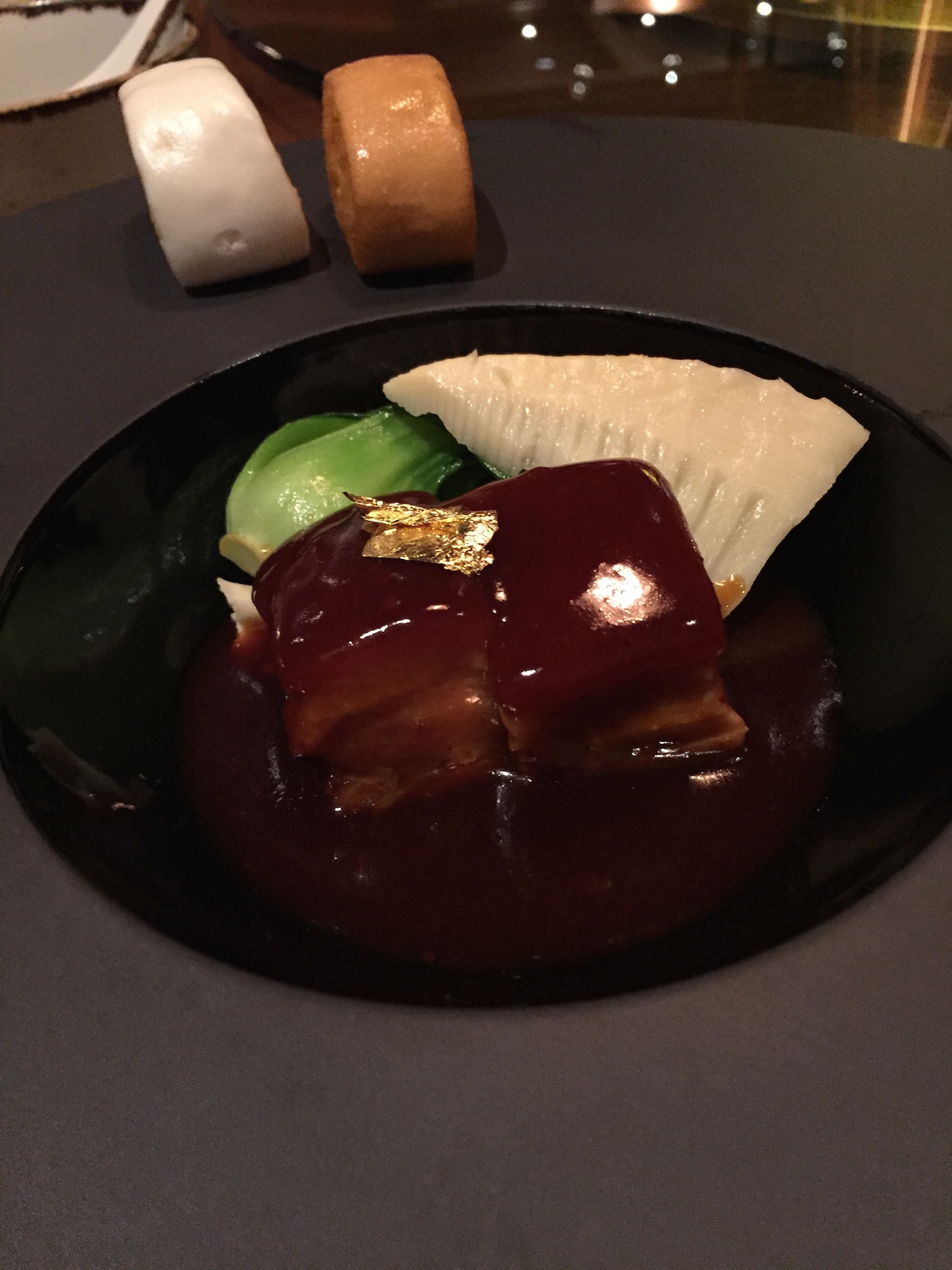 The pork belly was served swimming in a flavoursome and thick sauce with the meat owning a gorgeously unctuous softness. It came with some buns, one of which had been dyed with carrot juice to add to the overall presentation of this dynamic dish. 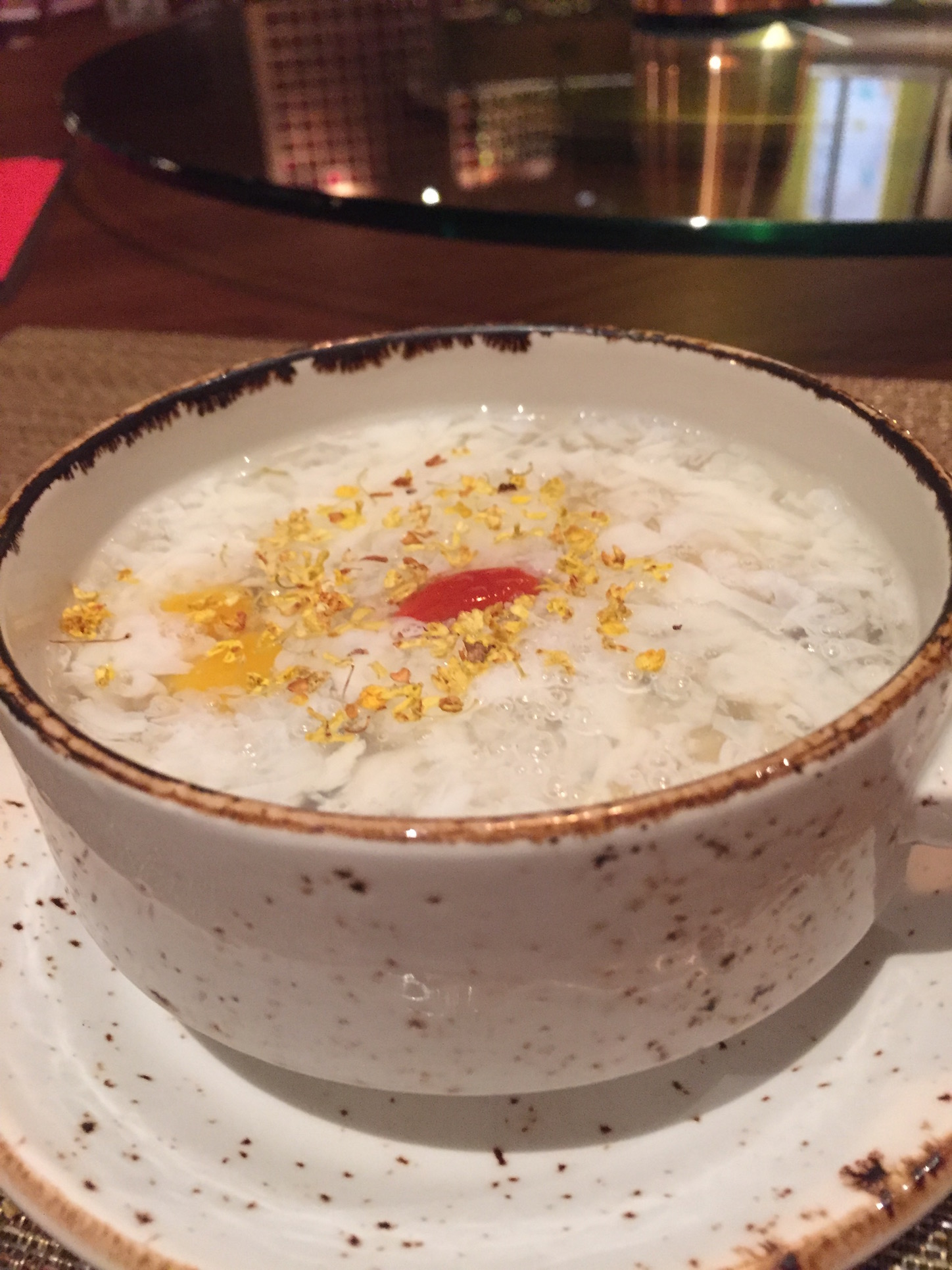 Dessert presented a huge display of textures made a treat for the tongue with this syrupy soup littered artfully with gold leaf and the bright colours of taro, pumpkin and sweet potato mini rice dumplings that added chewy bites to the spoon sipping.

The petit fours come in a cloud of liquid nitrogen for a nice unobtrusive hint towards the magical theme of this simply spectacular display of culinary wonder.