The Team and Vision Behind Ee Da Le

The highly anticipated Ee Da Le opened last month as the first of four new Harlan Goldstein restaurants at 8 Lyndhurst Terrace, with My Tai Tai, Mamasita’s Cantina, and Eat Me + Drink Me by Harlan Goldstein soon to follow in the coming months. Customers flocked to his new Italian restaurant to get a taste of the eclectic menu designed by one of Hong Kong's most well-known chefs. We spoke to Harlan about his role in his restaurants and on building a team he can trust. 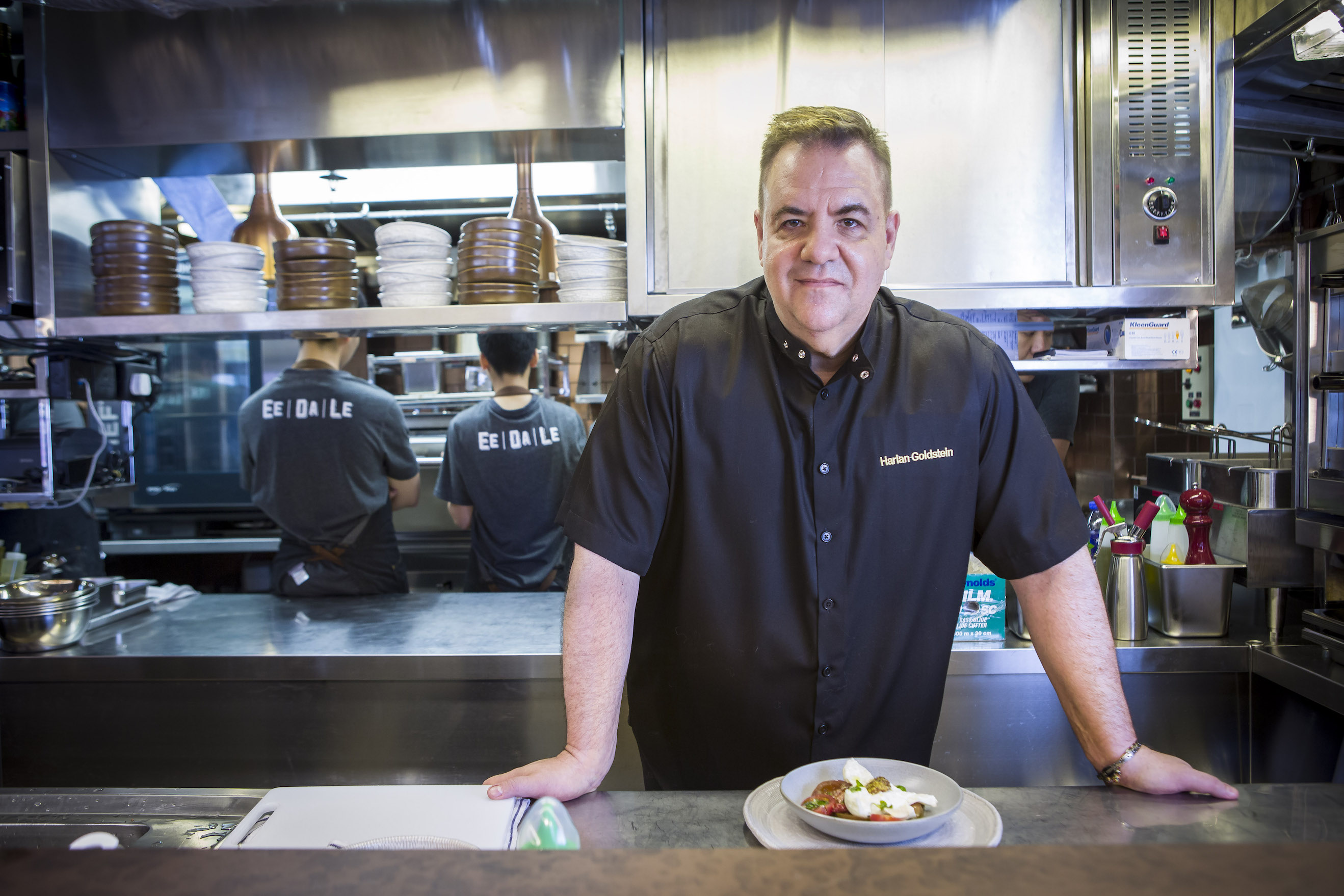 Harlan Goldstein first came to Hong Kong in 1993 where he began as executive chef for the esteemed Aberdeen Marina Club. He got his lucky break when he happened to meet real estate mogul Walter Kwok when he was cooking at a prestigious event at a private home. Harlan audaciously asked him as a joke, 'Do you think I could ever get a place in IFC to open up my own restaurant?' To his great surprise, the chairman replied, 'Sure, come see me tomorrow morning.' Harlan returned to the kitchen shaking but resolute. The next morning he was shown to the spectacular second-floor IFC location that was to be his new restaurant. Harlan says, 'Fear has never been a part of my life. I'm confident; I got match made in 24 hours to a Chinese investor that gave me HK$10 million to invest in the business. I then resigned after ten years of service at the club, and my restaurant became so popular that I gave the investor back his money within seven months. I learned to be honest from my Jewish mother and work hard. I never had a father; he didn't want the responsibility for me. So I learned how to work hard and earn my own money.' Harlan says the partnership had its highs and lows. 'I lost the rights to use the name Harlan's. I don't want to talk about it too much; it's bad feng shui. I said, "Keep it as a gift. I'll come back as Harlan Goldstein." I'm proud of it. In life, there's always a lot of ups and downs, but my mentor is Muhammad Ali – knock me down one time, two times, I'll get up for more and more and more. I'm a fighter for passion, for love of what I do. My staff and customers love me; I'm not sure about my competitors.'

He has now teamed up with ZS Hospitality to deliver this ambitious array of eateries. Harlan says, 'I took an eight-month break, because eight is my lucky number. I’m born on the eighth, I put eight on a roulette table and I always win. Eight, eight, eight. The partnership with ZS Hospitality Group has been great; they have shown me already that they trust me, and they're really great people, and I'm honoured to be associated with them after all the hard journey in my life so far. And guess what, the building that I took over is 8 Lyndhurst Terrace. So, we are feeling lucky.'

How do you view success at this stage in your career?

Money is not everything for me. It only gets you sick. But you know what, if I can have a comfortable life, if I can be successful in my own way, if my partnership can be beautiful, with my home, then I’m a set man. Right now, working with ZS Hospitality, these people are so beautiful; the whole family supports me a hundred percent and they speak my language. It’s the language of business. It’s pure business at the end of the day: it’s professional, it’s detailed, it’s correct, and this is what I love about these people. A lot of people in Hong Kong open restaurants, and they wanna invite all their friends to show off, and for me, that’s okay if your restaurant is already worth a lot. But at the end of the day, why we do open restaurants? We open them to be successful, and we want to take care of our loyal customers. We wanna give them great value, and we wanna give them a style that they don’t have anyplace else in the world. I get very, very excited. I love what I do. So, yes, I’m wild and I’m a tiger.

After all the ups and downs here, why did you come back to the city?

I made such an effort to get into the culture of Hong Kong, because I love Hong Kong. It’s a stressful city, it’s busy, people don’t have time to even talk to you. However, ninety-six per cent of our customers are local Chinese and support me. They love me and miss my food. So I came back, not in a small way, I came back in a big way. Because, you know what, I’m hungry, I’m starving for success. I have a passion that blows up in the morning. 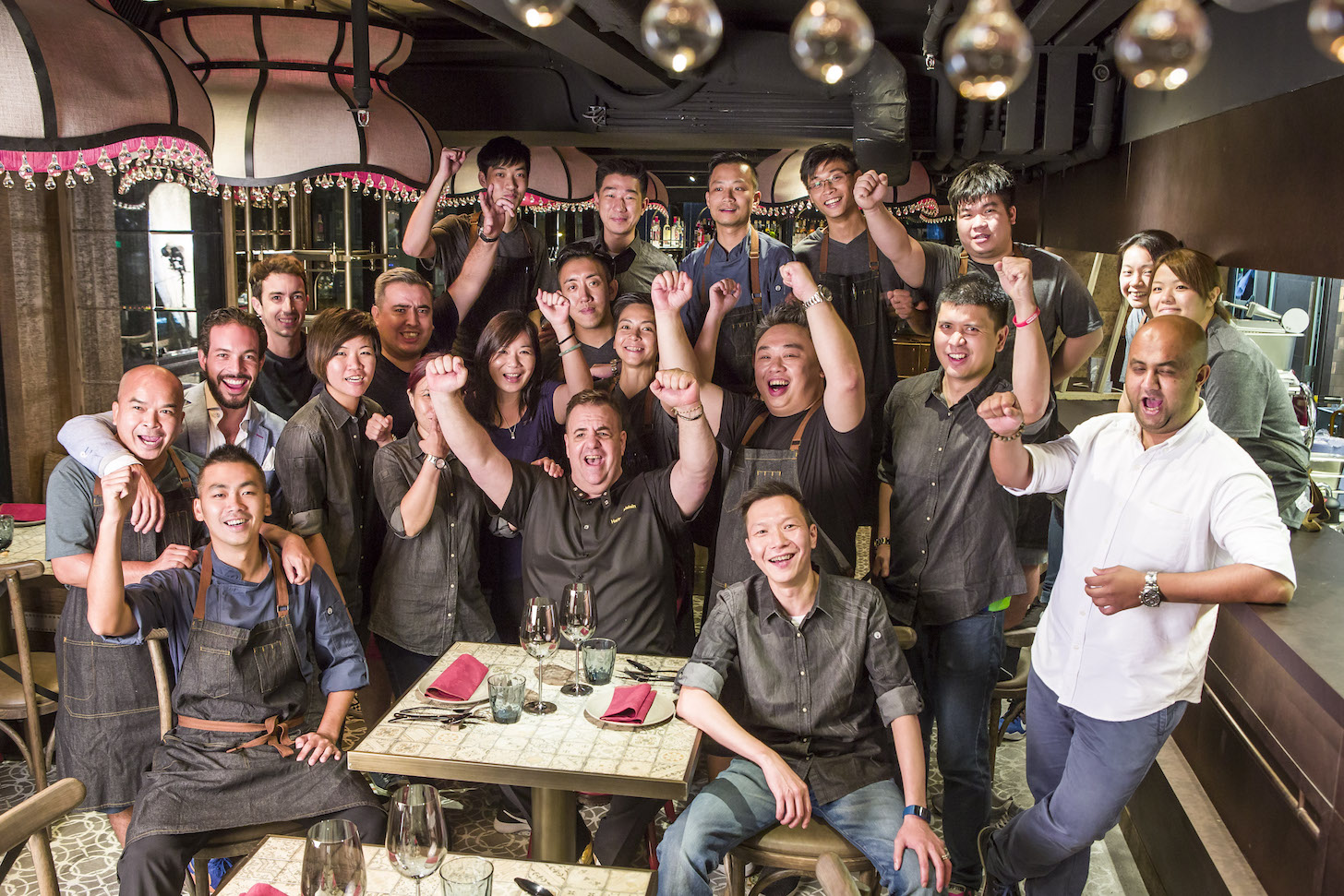 What role will you play in your new restaurants?

How did your experience working for Jean Banchet shape you?

I went to work for a three-star Michelin under Jean Banchet: 72 years old, he was the toughest guy I’ve ever worked for in my life. After a year and a half, he actually punched me in the face. I hit him back and I didn’t say a word. As I left the kitchen, he tried to pick up the biggest piece of machinery and throw it at me. He was a mental, passionate guy. However, I learned a lot. I shut my mouth. I ate my words.

Did this make you a tough leader as a result?

I have learned from the best. I have gone through the shit. I have got the battle scars on my face and my back. And I tell you what, I’m proud of it. So, the way I treated my staff 20 years ago, yeah, it was a little bit rough. When I was opening up the China World Hotel [in Beijing], I ran over 500 people that were all over me. I needed to earn their respect, not by being insecure but by showing them what I got. So if they were not good at their job, I would knock them off.

And how about your current leadership ethos?

People that don’t know me think I’m a bad boy from Brooklyn, that I’m arrogant and I’m cocky. However, the only ones thinking that right now are the competitors. They’re thinking, this guy is shaking up four of the hottest restaurants in town with staff that are impossible to find in Hong Kong. He just pulled 60 of his loyal staff that had been with him for up to 15 years, and he said, "Come to Papa." We’re taking over Lyndhurst Terrace and we’re doing a firework show. They all joined me immediately. I love them. I do not give them shit – I give them motivation. I’m a leader, and I feel like their mentor, because I’ve had a lot of mentors that mentored me. However, my mentors gave me so much trouble and pain. I didn’t want these kids to go through it. Not every day is perfect – we have our off days – however, we strive to be professional. And I’m a Capricorn. The problem with being a Capricorn is that we always want to be better and better and better. So at the age of 55, I’ve reached the level of 20th, and before I finish my career, I’ll make my legacy. I wanna go to the 80th floor. You know, that’s right, because eight is my lucky number. 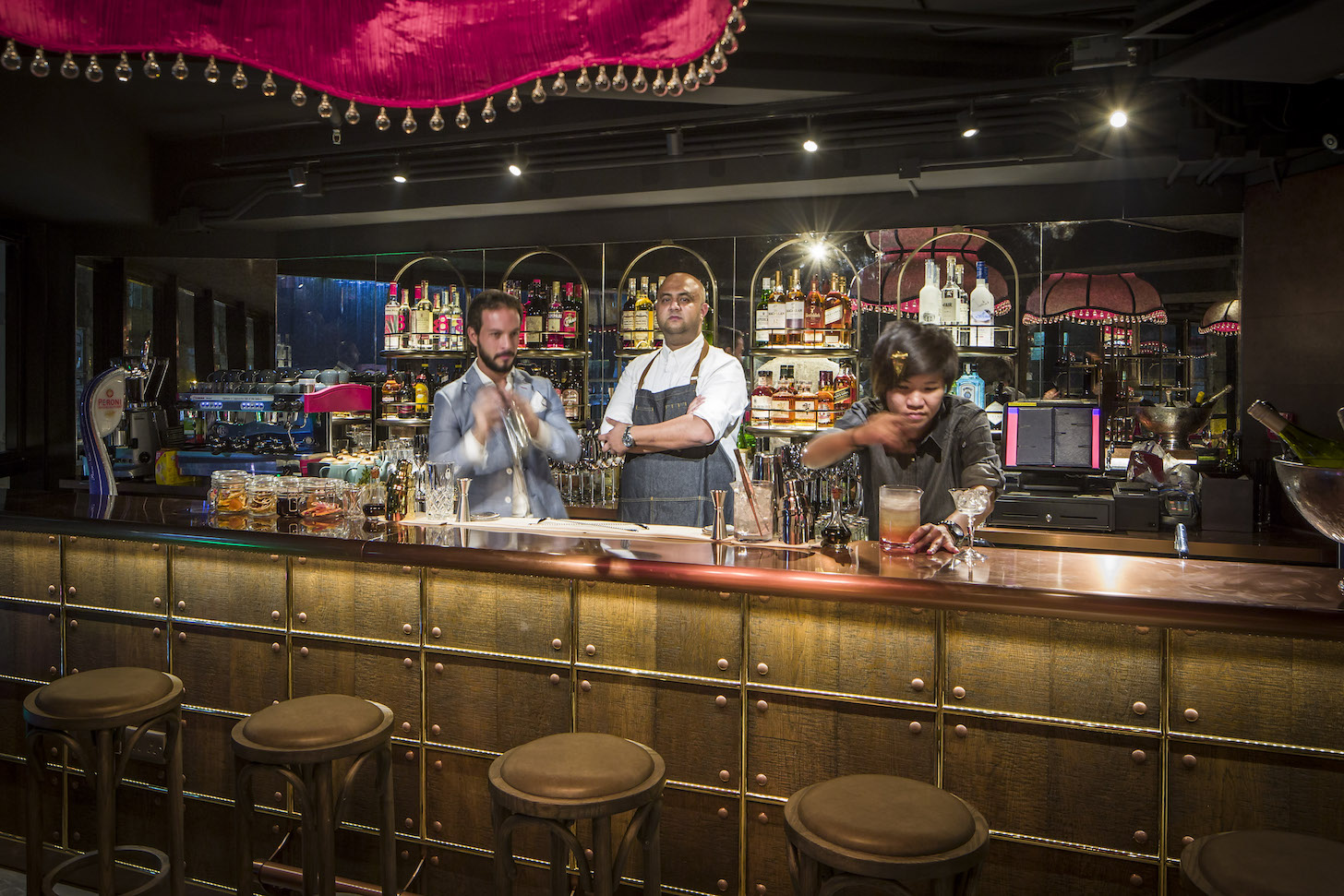 Tell us about your four new restaurants.

Starting from the ground floor, it’s Eat Me + Drink Me. It’s 41 years of my world travel journey through food. Second floor is My Tai Tai. I wanted to do it for 12 years, but I didn’t have the courage. It’s about Thai food and about the team that worked for me for 13 years. My Tai Tai is a women that I fantasised about – it’s a myth, it’s not real, it’s dreamed up. I’m a concept person that likes to have a complete story. Then we go to Ee Da Le. Everybody says, "Oh, you copied Eataly from New York." Excuse me, honey, I’m Chinese; I’ve been here for 25 years. Do you know what Ee Da Le means? In Chinese Mandarin, it means Italy. I didn’t copy anybody. I get inspired and I look. I inspect and I go, "That’s a good idea. Let me make it better." Mamasita’s Cantina is about real Mexican street food. The bar – you do a margarita and a shot, pop pop pop, a tequila. You got sexy people there. You got boys, you got girls, you got music. I guarantee those girls are gonna be dancing on the ceiling!  And I got the team that is gonna energise you to the maximum. 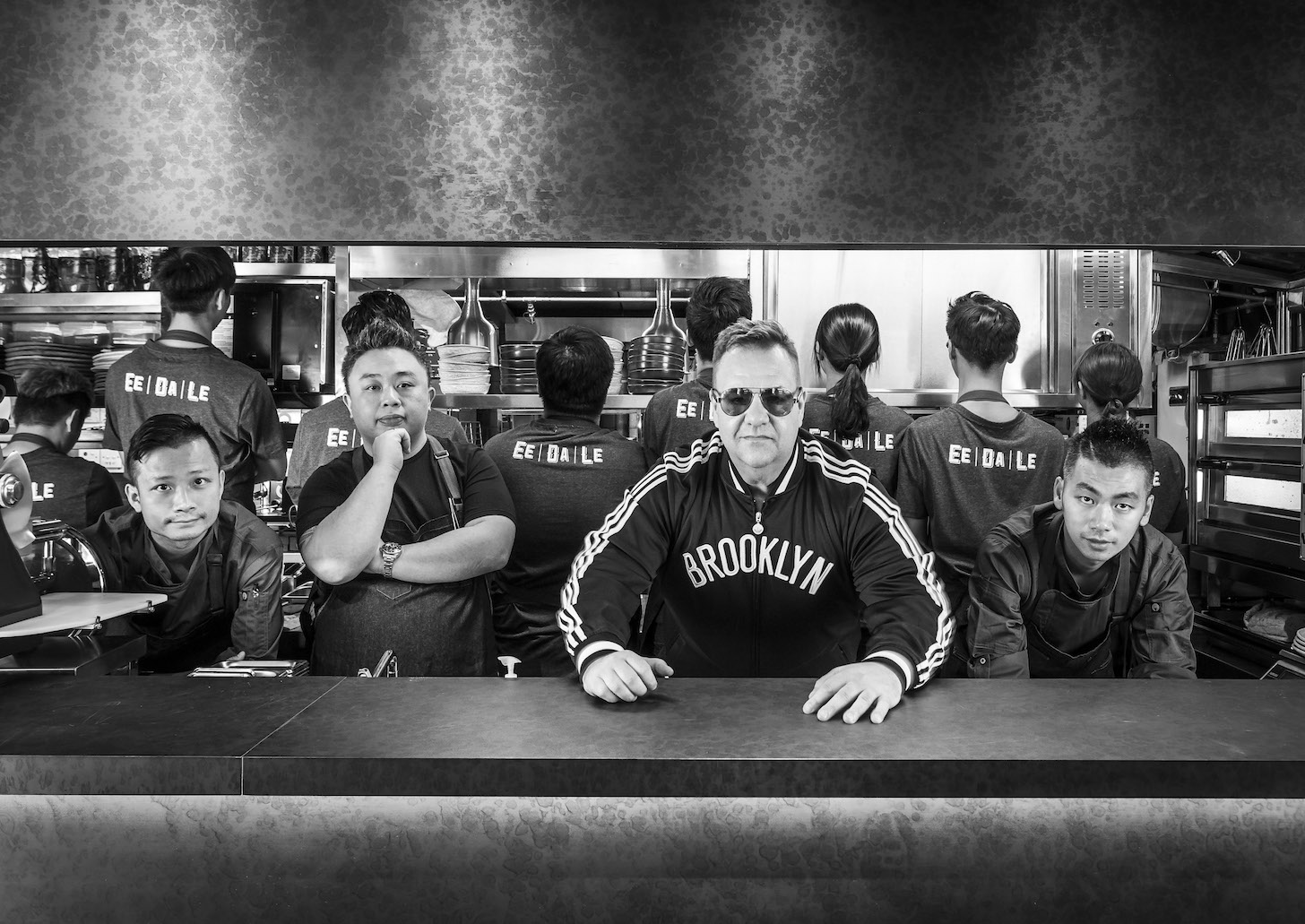 Brought to you by EMW Wines, who are passionate about wine and dedicated to introducing the best products to the market.