The Future of Food

A variety of industry professionals met at the Mandarin Oriental last week to discuss some of the issues arising in the F&B industry's future. Divided into three sessions, the first focused on The New Chef and discussed how the restaurant industry is changing and the ways that it should change. Panellist Richard Ekkebus of two-Michelin-starred Amber made the thought-provoking comment that diners who make reservations should be charged if they don't turn up. 'It's becoming absurd in Hong Kong. We have wait lists of people who would love to come. We cook for a certain number of people, so it creates waste and frustration within the team. This has got to change, as there are a lot of restaurants closing because of this.'

The second discussion, Faced with Waste, saw panellist Wendell Chan, project officer at Friends of the Earth (HK), highlighting the importance of not over-ordering for the sake of it. 'There is the issue of face, of not wanting to look like you're skimping on food and ordering too little at banquets. Food waste should not be a social norm.' Peggy Chan of Grassroots Pantry also weighed in on the subject. 'We need to shift the perception to nutrient-rich foods regarding portion sizes rather than how many calories you can fit in. It's an education thing. As a chef, monitoring how much you purchase and how much you use. It is my everyday goal to make sure we do not waste food. Education is very important so that it becomes habit.'

Panellist Dr Daisy Tam said that there are certain things the government can do that would easily make a significant difference to waste in Hong Kong. 'A [Good Samaritan] law would facilitate a lot more food donation. It would really help. Waste charges is potentially another one. Waste is misplaced resources, and if you put it in the right place, it can be used and zero waste is possible. Compassion fatigue is a problem, so how can you build it into the system to make it easy? If you own a restaurant, educate your consumers to demand the good but not the best [for example, using not just the best bit of the salad but all the salad]. If you go to a buffet, you are participating in a very wasteful dining experience. It's everyone's problem.'

There was a third discussion on the ever-changing face of the media landscape with the evolution of social media and the impact it is having on the dining industry. Catch On have released a report of their findings on these subjects, along with three more issues regarding everything from buzzwords and science in cooking to a return to primal techniques and the evolution of chefs themselves.

You can find the third annual Future of Food report here. 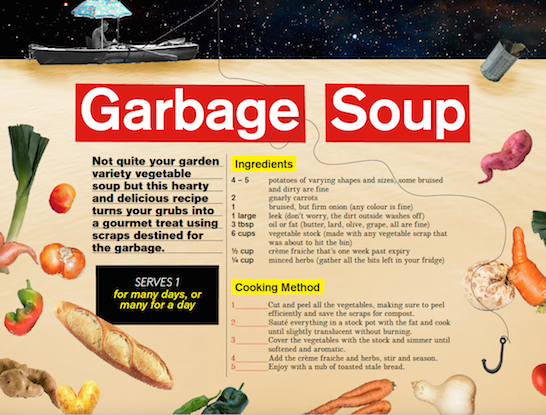 A thoughtful recipe from The Future of Food report