Jonny Farrell has been interested in butchery since he was a wee lad growing up in rural England and has now made it his life's work to source some of the most ethically raised, flavoursome cuts of meat for his new in-house role as butcher for Blue: Butcher and Meat Specialist. We got the deets from the meat man himself on his butcher origins and Blue's state-of-the-art butcher’s shop and dry-ageing room. 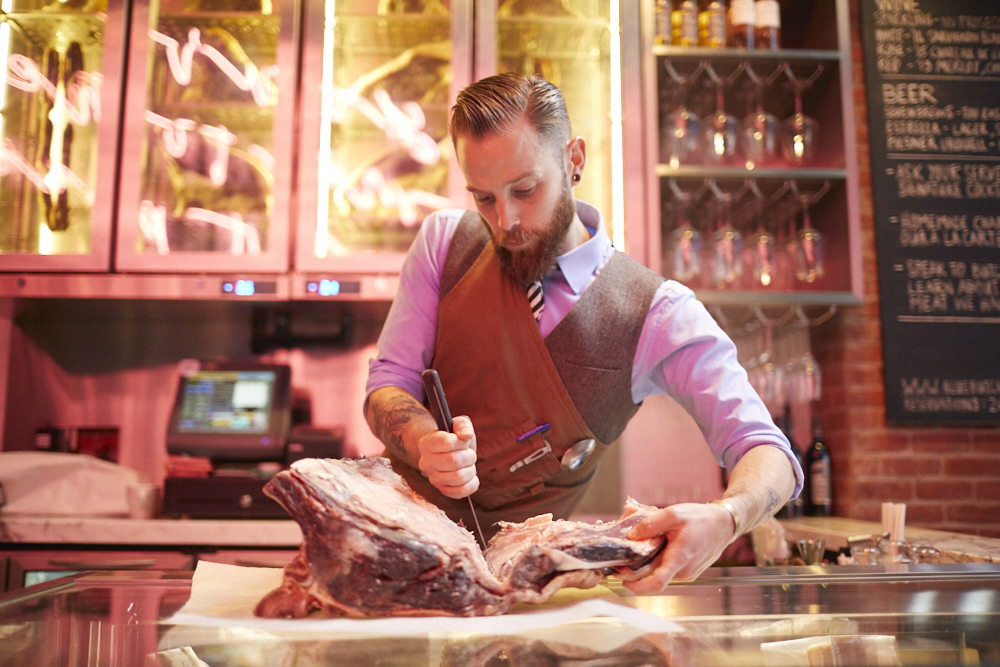 How did you become a butcher?

So, I’ve always had a want to understand why something works. I was never the best in classes because I’d always want to know WHY anything worked. I was that kid in the back saying, 'Yeah, but why?' The same goes for cooking. I’ve always worked in F&B, and no one really ever explained why use a loin, why use a thigh or why this bone is better than that. When I cooked for myself, I would always choose the opposite of what the book asked for, simply to try to dissect why.

Back in the early days, in the shire where I grew up, I was a pot washer at the local pub and was exposed to full-carcass breakdowns of pigs. Also growing up in a village, there was an awesome local butcher that we always went to, with shed loads of meats hanging. Blood, guts and all that were fascinating. But it was the same then; I had to know how it all worked.

When I was at uni, I learned quickly that you can impress girls by cooking. By filleting some fish you can’t pronounce or by breaking down a big piece of meat, you somewhat come across as master. I’d always be the lad you pass on the way to a lecture who would have a bag of rabbit saddles or a heap of veal liver – student loan well spent! Fast-forward a load of booze-filled, music-playing days and I’m sat in Shanghai and staring at a job post asking for a butcher. Boom, why the hell not? Since then, I live, breathe and sleep butchery. That probably makes me sound like the fellow from American Psycho!

Are you enjoying your showroom of a butcher shop? You must feel like you have your own show with everyone peeking in on their way up to dine…

It's proper funny. I’ll be in there with my speakers blaring out a bit of James Brown or Sinatra. When you’re in the fridge at night, you can't really see people looking in. Needless to say, a few people have caught me dancing about or singing out loud! But, yeah, I bloody love it there. I’m like a kid in a sweet shop. It's around four degrees, and most people can’t seem to last two minutes in there. I spend most of my day in there wearing a shirt and waistcoat. But I’m from the North of England – I’d give John Snow a run for his money any day. 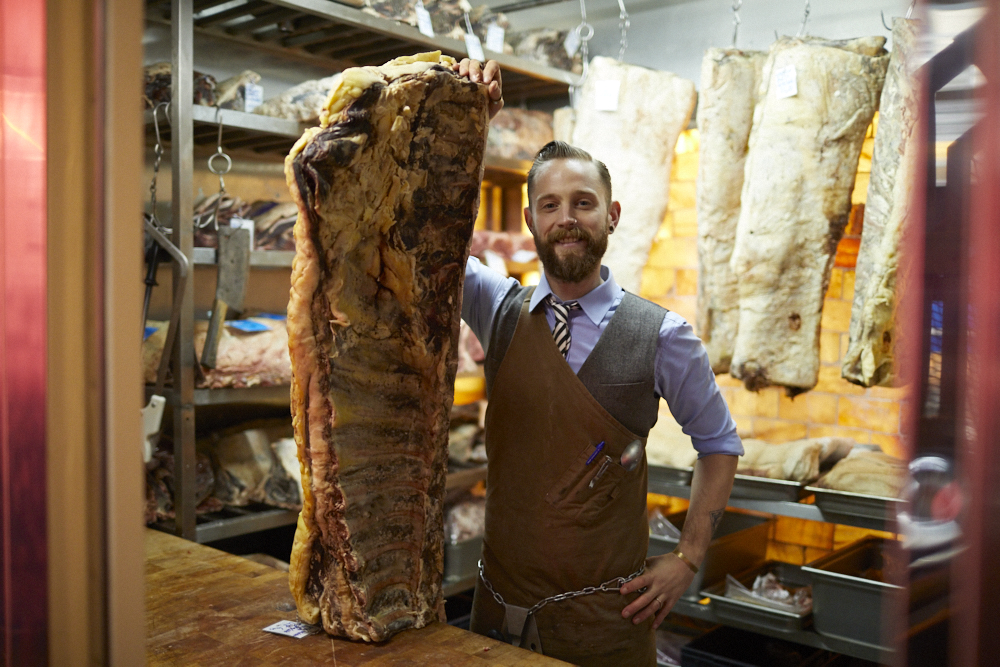 What do you like most about being a butcher?

Honestly, apart form playing with knives all day, it’s the customers I get to meet and become friends with. I’m a passionate fellow. I’ve changed careers to be a butcher, and I’m completely besotted with my craft. The best thing is that people who come to me to buy meat usually want to talk and learn about it, which means that on a daily basis I interact with equally enthusiastic people. It’s infectious.

How do you think the field of butchery is changing?

People are definitely more interested in what they are putting in their mouths, especially in Hong Kong. I’m in touch with the whole butchery community on Instagram, and all my fellow butchers worldwide are learning more about meat. It’s not just about which cut is ideal for braising or BBQing but [for example] what are the nutritional values that will aid for an upcoming marathon. That part gets me excited.

Is there anything you wish people would be more open to eating?

Offal! Most are packed as an easy nutritional boost, but people tend to shy away from them. Some devilled lamb kidneys on toast, anyone? There are lots of unknown cuts that are amazing and need more love. Take, for example, the velvet steak, a cut found in beef heel. Considering it’s from a sinewy, heavy part of the animal, its super tender and juicy. Getting hold of these cuts in Hong Kong can be difficult. But stick with us at Blue – we will be able to awaken some taste buds to new things soon!

What’s the most overrated cut?

Before I answer this, everyone has his or her own preferences and tastes, but I’d have to say the tenderloin. Yes, it's tender and that, but where it’s tender it lacks flavour. But some folk aren’t into massive beefy flavours, and as I’m getting older, I’m also learning more about understanding that. 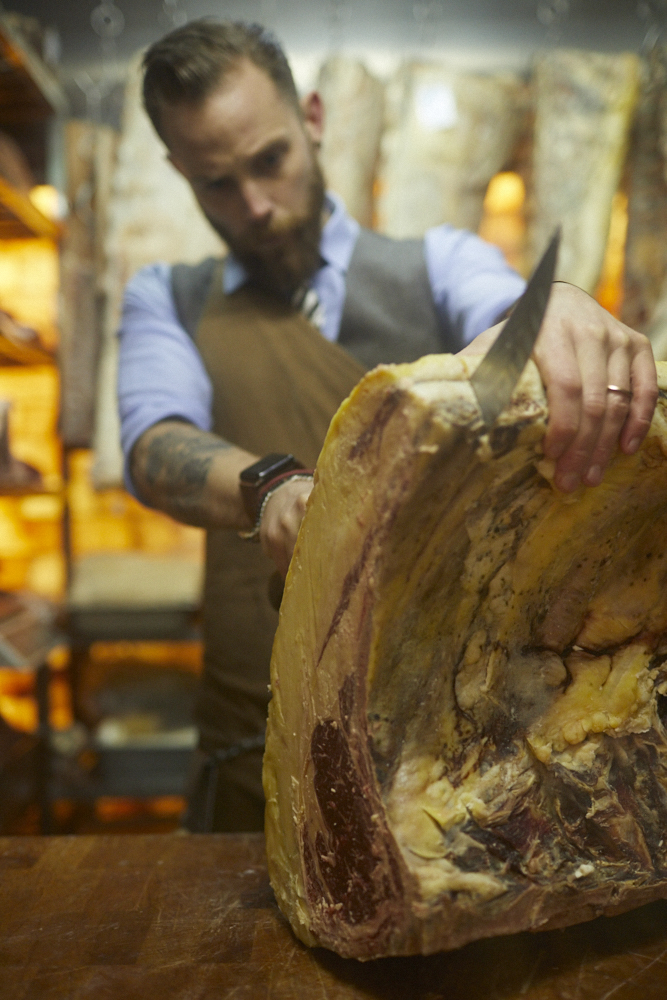 What’s special about the Rubia Gallega at Blue?

Seriously THE best meat I’ve ever tasted. Rubia Gallega, or Galician Blonde where I come from, is a breed of cattle from Spain renowned for being super big. They’re bought as ex-dairy cows and left to roam around the Galician hills [north of Portugal, Bay of Biscay] where they live out the rest of their lives completely chilled – just like I’d like to be in my retirement days: getting fat and relaxing to the max. This gives the meat a distinct flavour that is seriously like no other. And best of all we’ve got exclusivity on the crème de la crème.

So these old cows age so well on the inside essentially because they’re retired and enjoying greener pastures?

In a nutshell, short of playing the Spanish equivalent of Bob Marley, I don’t know what else can be done to relax and boost the nutrients. You say greener pastures and you’re spot on. The hills where they roam are right near the coastline and with that brings a load of tasty grasses and herbs that can only be found in these places. These minerals are absorbed into the pastures, which are then eaten by our hungry mouths. I like to keep things simple: happy cow with a happy life produces much tastier meat.

How would you describe the unusual, pungent flavour of this intense meat?

Now this is something you need to experience in person; the following words will not do any justice! When I talk with customers, I always bring over their steak so they can see and smell it – it’s part of what we believe. This is such a unique product that has to be fully respected and understood. I normally tell them that it has gaminess to it but nowhere near lamb gaminess; this bad boy is in a league of its own. I also tell my customers that smell isn’t a word that can be used to describe Rubia Gallega. I use aroma. I might sound a bit up my own arse, but as soon as they inhale, they look at me with an … understanding. And when I come back to the table after they’ve tried the meat, they have the same look on their faces, along with a huge smile!

Tell us about that beef fat candle.

As you can imagine, our cows live pretty happily and tend to add a few pounds here and there, totally acceptable in their retired and 'no need to impress anymore’ life. But when it comes down to trimming, I’m usually left with a lot of fat, and I hate wastage. When I was in Shanghai, I used to make and sell pork scratchings to local bars; a by-product of this was lots of lard. My wife and I used it on everything: we cooked with it, we spiced it and used it on toast, we never got round to using it to make soap, but that’ll be a little further down the line. But Edgar Sanuy [Blue's corporate chef] and I had a brain wave one day: why buy other fat when we have this premium product at our disposal? Some restaurants give you olive oil and some give you hydrogenated butter. At Blue, what we give you is as natural as can be: rendered beef tallow. 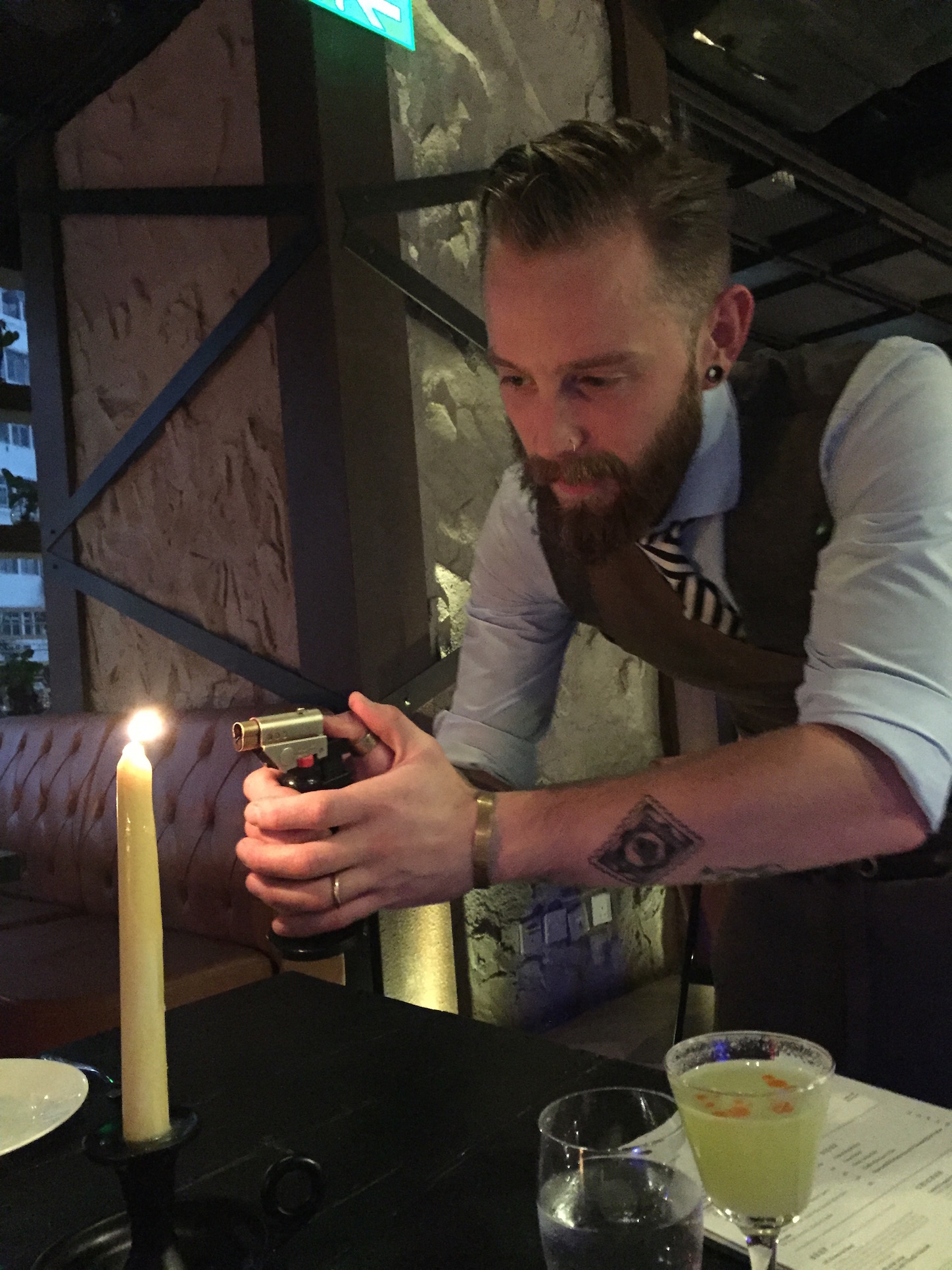 What other meats are you particularly proud of at Blue?

Our Rubia Gallega gets a lot of press, but our other meat is something that gets me a giddy kipper. I work closely with our supplier in the UK, and we bring over proper heritage cattle breeds. Think your classic British beef icons such as Hereford [recently in the headlines as Heston Blumenthal's fave], Longhorn, Lincoln Reds, Belted Galloways. And I pride myself in being able to talk with my customers about this. I remember growing up and going into the butcher's and having this option. Just because we’re not in the UK we should still have the knowledge and option.

What’s your favourite type of meat to go to work on?

It used to be pork as I was cutting a lot of that before, but I’d say the Rubia Gallega. I think it’s due to the age of the animal that can show me a lot whilst I’m breaking it. But unfortunately I can’t bring in the whole beast. So if it’s whole-carcass breakdowns, it’d be lamb. We’re bringing in salt marsh lamb from Wales. It has a very similar mineral consumption to our old Spanish cows. I love breaking down a whole carcass and looking at all the products you’ve made from one thing.

Can you tell us something about meat that we might not already know?

You’re best off coming into the butcher's for a brew. But in the meantime, ever tried dry-aged pork? Some of the most intense porky goodness I’ve ever tried! 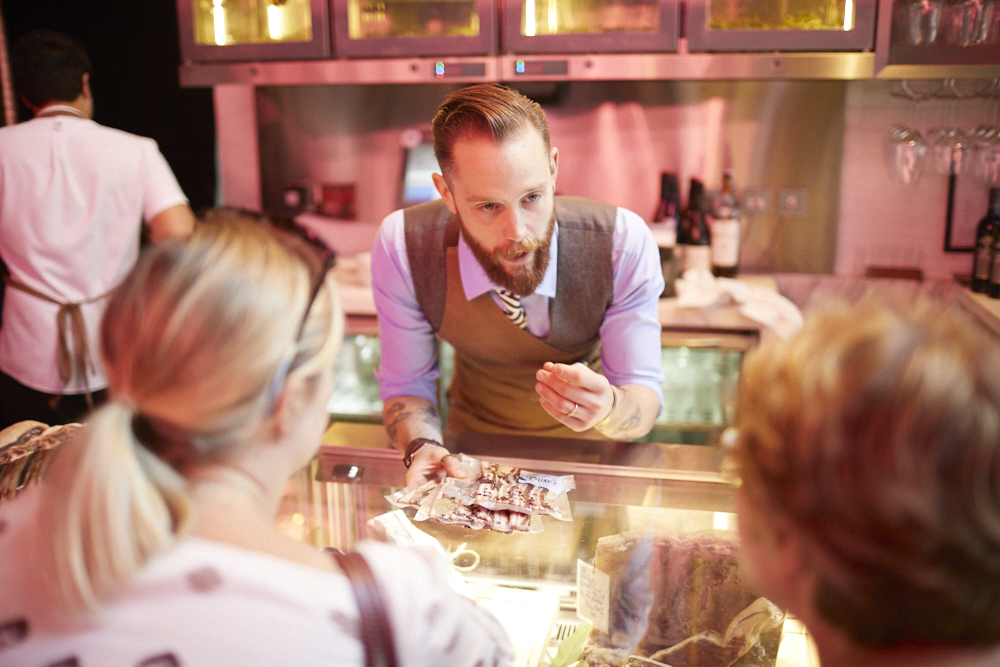