Hong Kong desserts just don’t get the recognition they deserve

Unless you have long lived in the 852, you might not automatically associate this city with its sweet tooth. The UK with all their heavy puddings, yes; France and its lighter-than-air pastries and cakes, yes; North America with their jumbo sweet everythings, clearly; but beneath Hong Kong’s showy savoury-loving exterior, you’ll also find a soft shell of saccharine-chasing aficionados who will cross over to the far corners of this town for a great bowl of syrupy soup, eggy pastries or gooey dumplings that ensure any sweet shop worth its salt will have queues that you can count on. 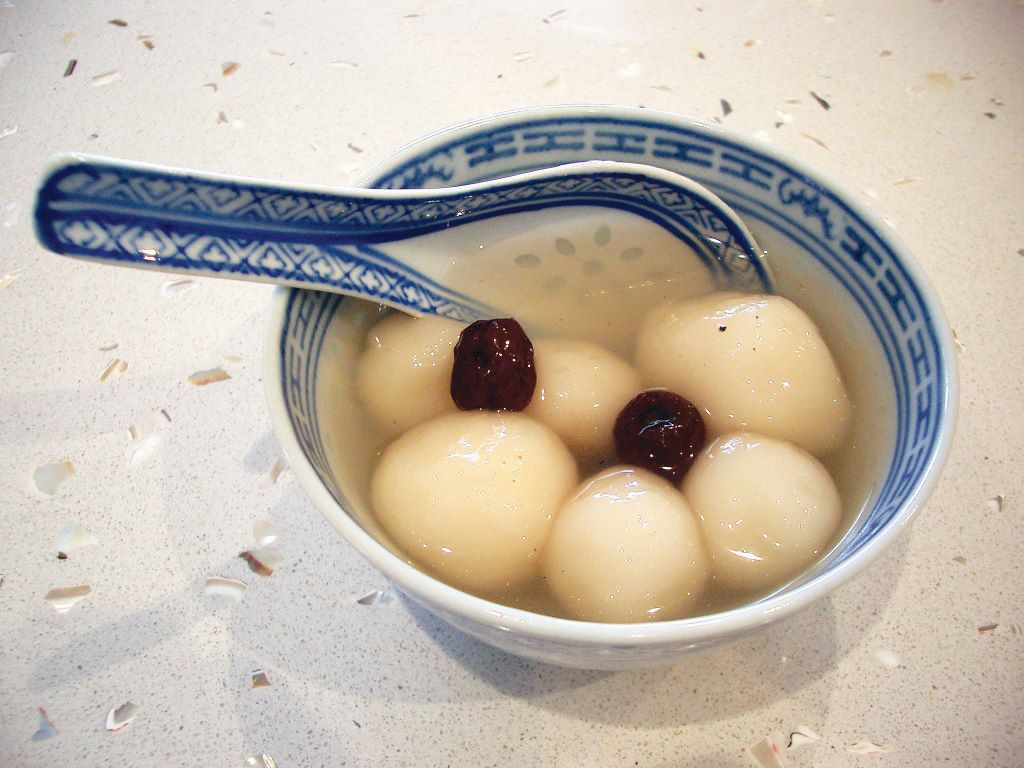 Just the name conjures images of gloopy goodness to our minds. For the uninitiated, tang yuan, as it’s known, is often translated as glutinous rice balls in ginger sweet soup – see, just doesn’t do it justice. These voluptuous spheres of glutinous rice flour give way to a rich and fragrant filling of roasted black sesame plonked into a syrupy soup of Chinese rock sugar and ginger. The sesame filling can be substituted for lotus seed or red bean if that’s more your thing. We like to get our dose at Fook Yuen, 7 Fuk Yuen Street, North Point, 3106 0129 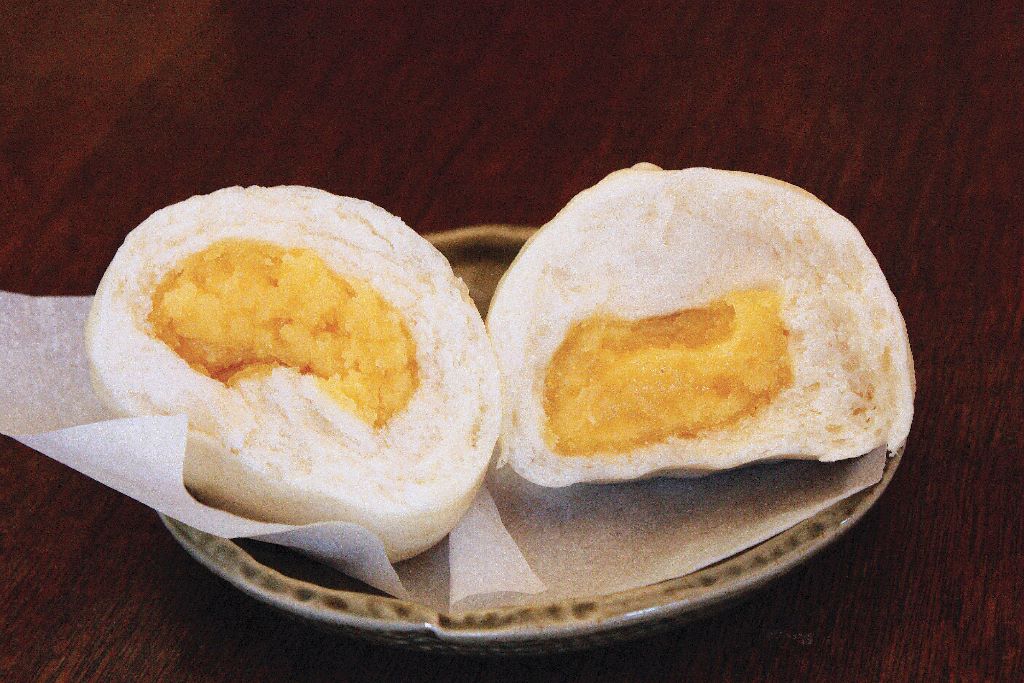 The latest versions of these all seem to be cuted up with little eyes and mouths that erupt custard when prodded strategically, but there are also plenty of innocuous-looking white rolls that reveal hidden depths of the salty-sweet flavours within. Soft, tender steamed salted egg yolk buns, or liu sha bao, should sport a glorious buttery hue of runny custard. There is also the lai wong baoversion with a firmer custard filling, which, although also delightful, doesn’t photograph quite as well, so we're more inclined to seek out the former. For a special sampling, visit Fook Lam Moon, 35–45 Johnston Road, Wanchai, 2866 0663 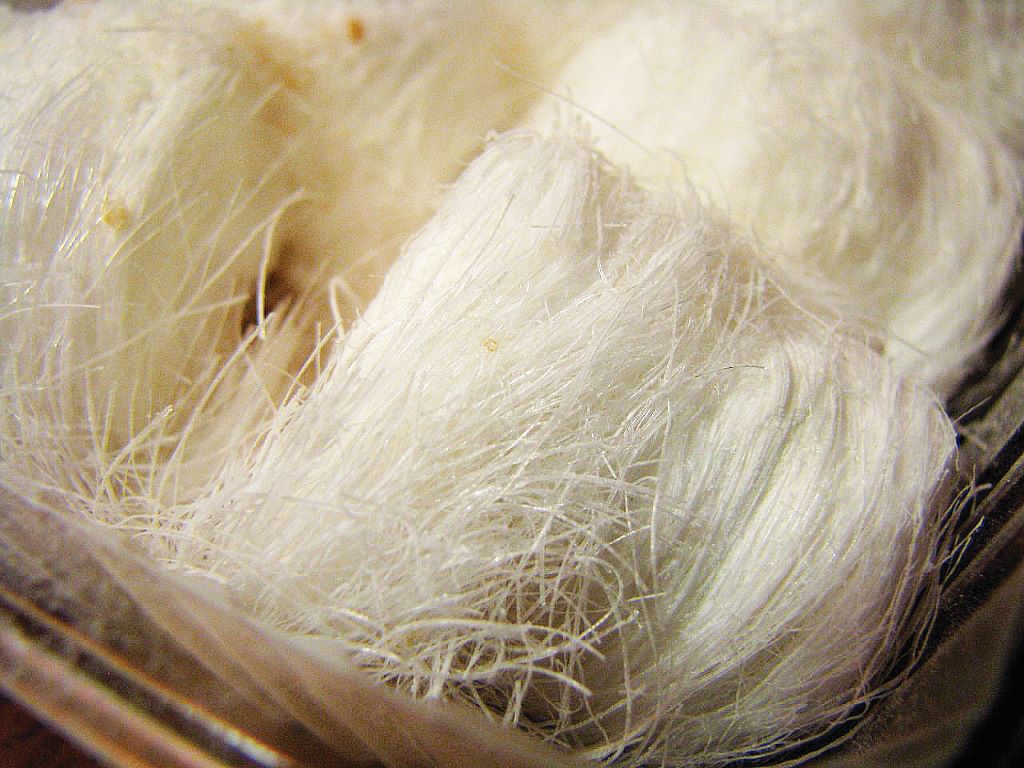 Often referred to as Chinese candyfloss, this spun-sugar treat resembles a balled-up spider’s web and dates back to the Han Dynasty. A lump of sugar and maltose syrup is tossed into a pot of glutinous rice flour and then folded and twisted until thousands of strands begin to appear like magic from the mixture. The strands are then delicately folded around a spattering of peanuts like a little bird’s nest bundle to be devoured at will. The sticky strands can easily get stuck on your face, and this was the very reason the emperor originally decided to deem them dragon’s beard. So stick a few on your chin and enjoy the rich flavour. Buy yourself a box at bamboogarden.com.hk 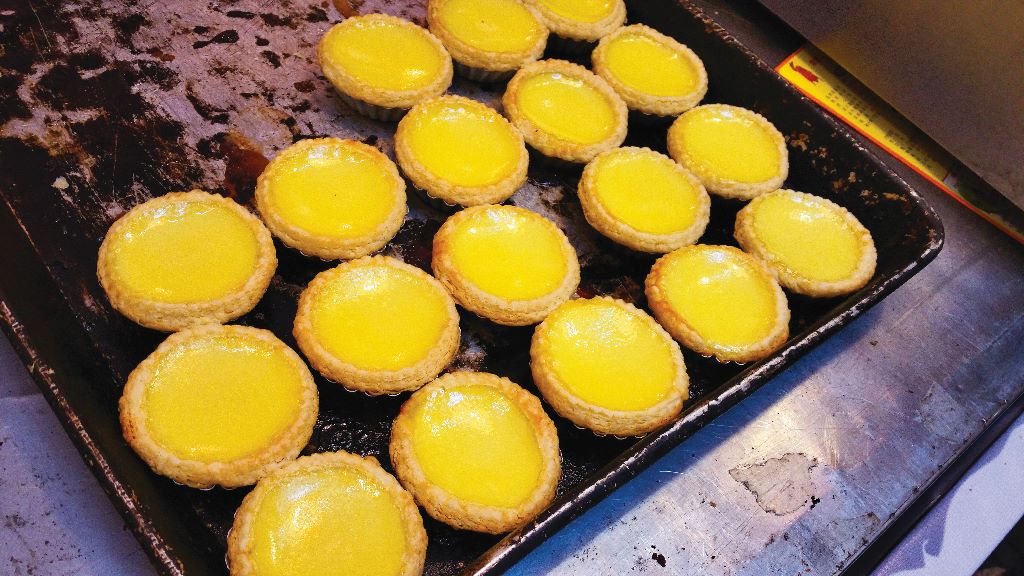 We have the British colonial period to thank for these sweet custard circles sporting an often luminous shade of yellow. Baked with a flaky shortcrust dough, people have their favourite shops for purchase, while some prefer the Portuguese version with its deep yellow filling and caramelised top layer encased in puff pastry. Our Food War found our faves were from Tai Cheong Bakery, 35 Lyndhurst Terrace, Central, 2544 3475 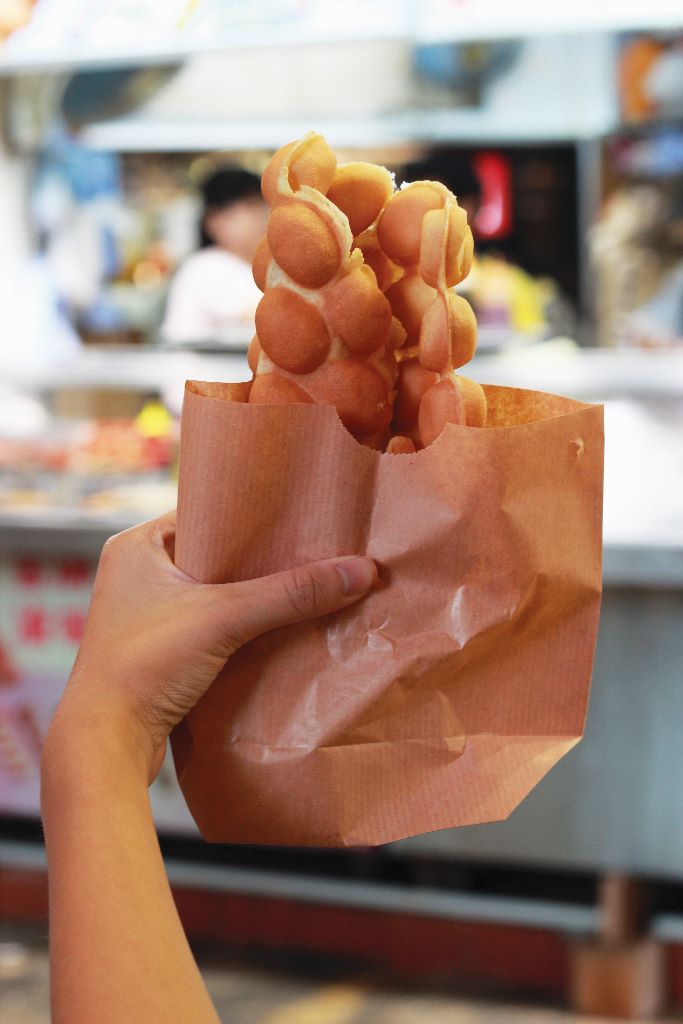 Put eggs in our desserts and we will devour them. Often referred to as eggettes, the egg, sugar, flour and evaporated milk batter is poured into a hot iron with golf-ball-sized moulds to form these small, crispy-but-soft-interior rounds that can be flavoured with everything from peanut butter and chocolate to nothing at all. They are delicious in every form. We are deeply addicted to the ones at Mammy Pancake, Shop K1B, 36 Man Tai Street, Hung Hom 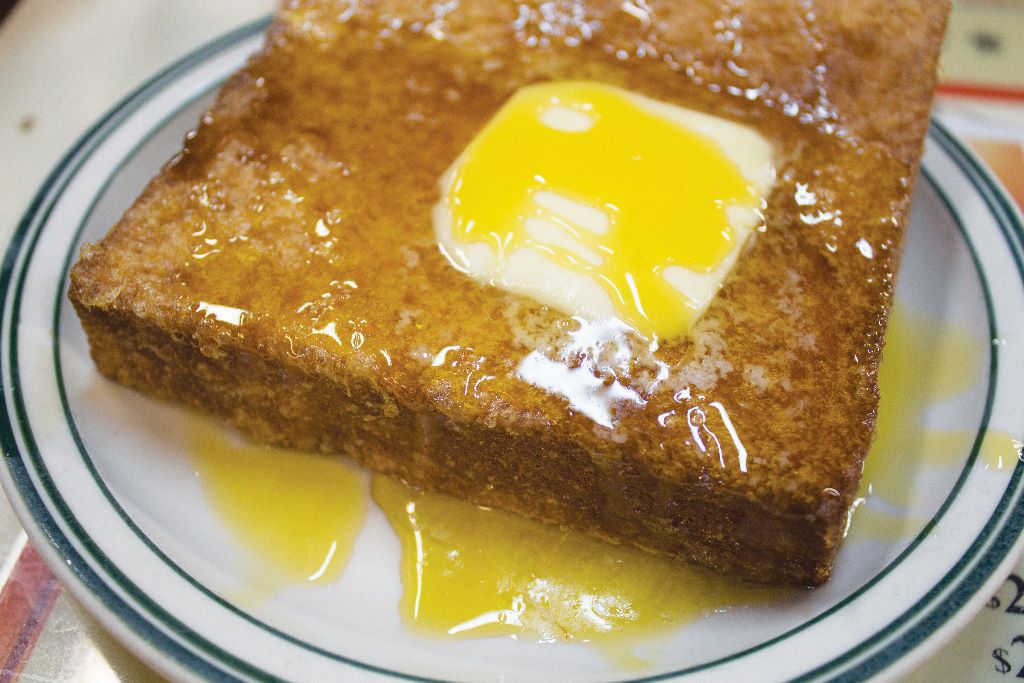 This is thick milk bread soaked in egg batter with a generous layer of peanut butter in the centre, served with butter and syrup or condensed milk on top. It’s like a giant brick of deliciousness. One of our favourites is at Hing Kee, 182 Hollywood Road, Sheung Wan, 2549 3419

This healthful dessert is made from the Chinese mesona plant, which runs in the mint family. The dried grass is boiled until it resembles a viscous black tea and mixed with starch to conjure a gelatinous texture that, when cooled, can be chopped into blocks and served up with sugar, milk or fruits. This is a strictly warm-weather dessert as it's known for its cooling effect on the body. Think of a slightly bitter, slightly sweet bowl of herbal jelly and you’re halfway there. However you describe it, it’s positively delicious. A trip should be made to Kei Kee Dessert, Shop 7, Chi Fu Centre, Yuen Long, 2479 4743 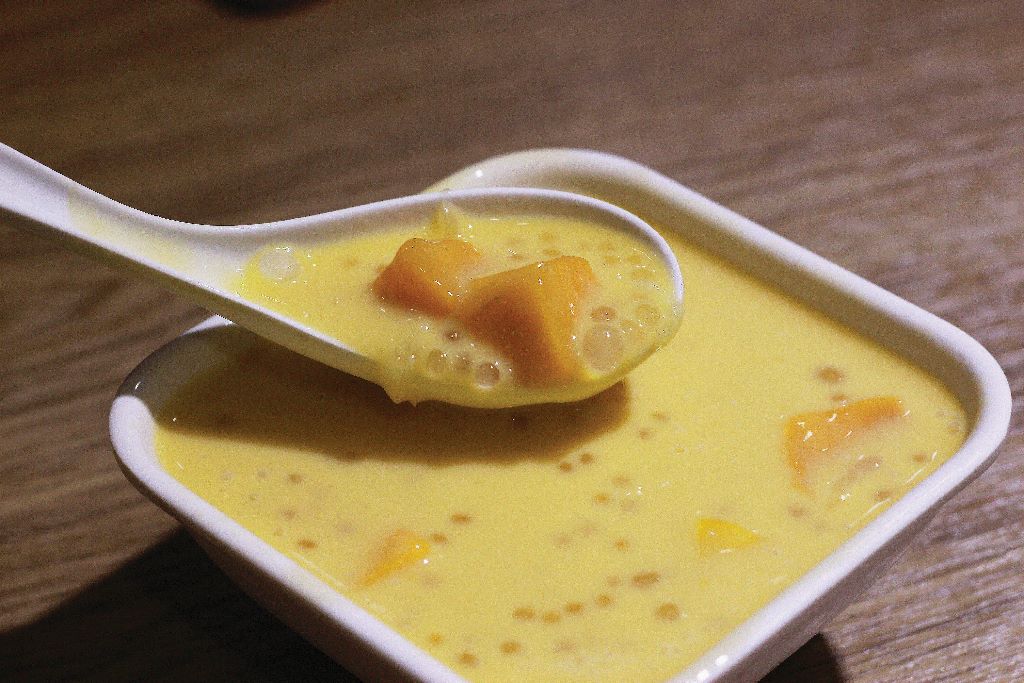 This relative newcomer to the Hong Kong sweets game was only invented in 1984 by Lei Garden but has gained a substantial following of dedicated dessert diners ever since. Although many variations have popped up, typically it's composed of chopped mango blended with boiled sago along with coconut milk, cow’s milk and evaporated milk, then topped with pomelo and served chilled. We’re partial to the version at Honeymoon Dessert, Shop B110-F, B1/F, Times Square, 1 Matheson Street, Causeway Bay, 2917 7233 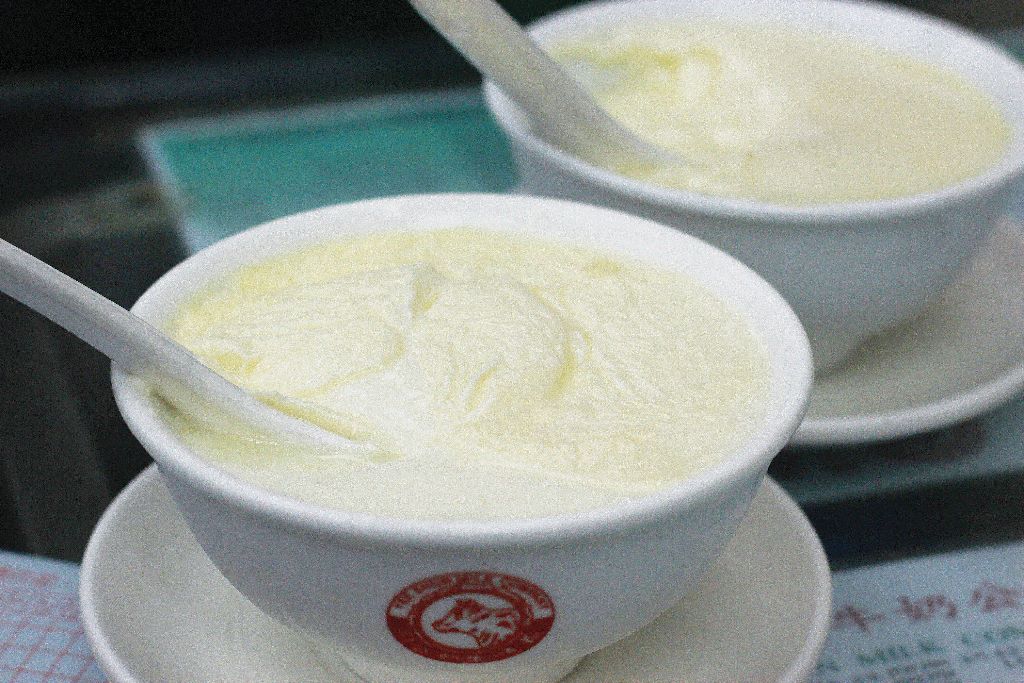 Oft referred to as double-skin milk pudding, which we admit doesn’t make it sound great. But a good double-skin milk pudding is the kind of thing that stays with you in memory for weeks afterwards. Simple in ingredients, it’s the fussy method that leads to this heavenly dish. Milk, egg white and sugar are all it takes, with a bit of boiling, letting it cool to form a skin, then steaming and letting cool again to get that decadent double skin. Silky, creamy and custard-like, you can go for the renowned original version or check out one of the more dressed-up styles that include coffee, ginger, chocolate, red bean and lotus nut. Cold or hot, in the run-up to the cold weather, the warm version will heat up the soul. Try it out at Yee Shun Dairy Company, 506 Lockhart Road, Causeway Bay, 2591 1837

Known as put chai ko, which literally means cakes in small bowls, these bouncy, chewy rounds are often served on sticks and are made of rice four and wheat flour with red beans and brown sugar, combined in a ramekin and then steamed until they come out springy and ready to devour. Red beans are low in fat and calories yet high in protein and fibre, and the gummy-like texture might bring back many a Hong Konger's nostalgic memories of childhood. We hanker for the ones from Kwan Kee Store, Shop 10, 115–117 Fuk Wah Street, Sham Shui Po, 2360 0328

Made with coconut milk and sago, this sweet soup known as hong dou tang is prized for its health-giving properties. Thick with a subtle sweetness, this dish will finish you off in the most pleasant of ways with its texturally rich, chewy balls of clear sago pearls, adzuki beans and dried tangerine peel that can be served hot or cold, depending on the time of year. The name says it all at Red Bean Dessert, Shop B1, King's View Court, 901 King's Road, Quarry Bay, 2601 9201

Another souper one for you, hun yun wu by those in the know, this is a hot, thick soup of ground almond powder and sugar that they say is good for the skin because of the vitamin E content of the almonds. So if you’re in search of that elusive fountain-of-youth sundae, this delicious, de-ageing dessert is the one for you. Try a slurp at Yuen Kee Dessert, 32 Centre Street, Sai Ying Pun, 2548 8687 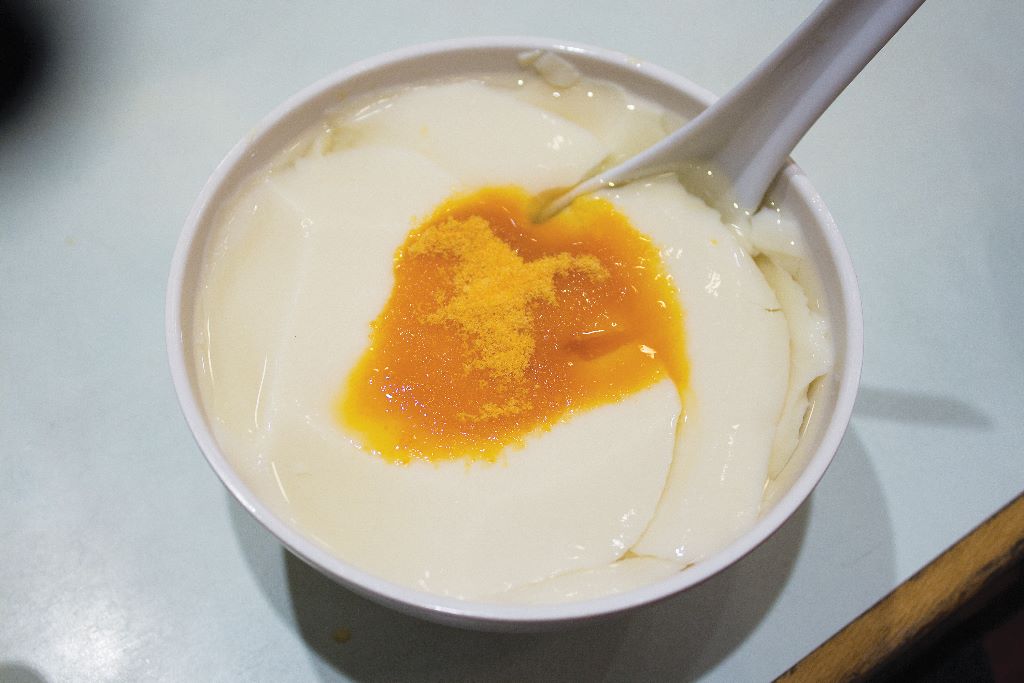 You can also call it soybean pudding, bean curd pudding or the more common dou hua. Either way, like most Hong Kong desserts, it has many names. Warm and wobbly, authentic tofu pud is made from soaked soybeans, ground up, filtered, then boiled and blended with gypsum powder and left to jellify. It’s an arduous process but worth the effort for the sweet, creamy concoction that is served hot or cold with syrup. Try it at Yan Wo Dou Bun Chong, 55 Jardine’s Bazaar, Causeway Bay, 2808 4738

Another victim of a translation that could really use a jazzier name, but as old Billy Shakespy aptly said, 'A rose by any other name would smell as sweet', and these certainly taste as sweet despite their stale moniker. Little springy triangles of a bright white make up this street snack that’s soft and airy, made from steamed rice flour and sugar. A smashing white sugar sponge cake can be found at Kwan Kee Store, Shop 10, 115–117 Fuk Wah Street, Sham Shui Po, 2360 0328 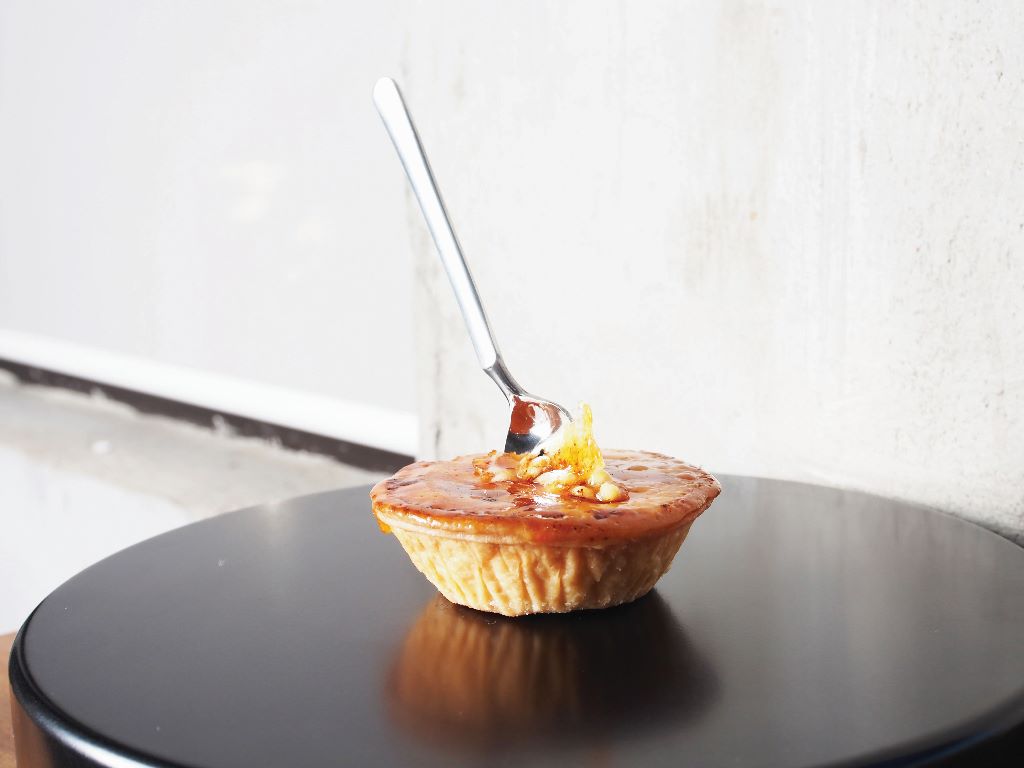 We are such fans of Jeffrey Koo’s crossover desserts, we had to include them. This celebrated pastry chef at AnOther Sweet Place has been whipping up sweets that celebrate Hong Kong’s heritage along with the flavours from classic French desserts. Treats include the Open Sesame, a black sesame forest cake, the crème brûlée tart, the mango sago coconut cake and the Prima Donna, a raspberry osmanthus cake, along with other classic pastry creations like chocolate cakes and madeleines. Try them for yourself at AnOther Sweet Place, Shop G, Lyndhurst Building, 23–29 Lyndhurst Terrace, Central, 2523 4388