At number one for the third year is Bangkok’s Gaggan, with seven Hong Kong restaurants also recognised as amongst the best of the best in Asia

Like the Michelin stars, the World’s 50 Best Restaurants announcement is eagerly anticipated each year by restaurateurs and food lovers alike. Here in Asia, we have our own annual 50 Best list – this year’s Asia’s 50 Best winners were announced yesterday at the awards ceremony in Bangkok.

Taking the tippity-top spot for the third year in a row is Gaggan, Chef Gaggan Anand’s progressive Indian restaurant in Bangkok. At number two is Restaurant André in Singapore. Hong Kong’s very own Amber, helmed by Richard Ekkebus, has been named the third best restaurant in Asia (despite, we should note, failing to be awarded its elusive third Michelin star). Hot on Amber’s heels is 8½ Otto e Mezzo BOMBANA at number 4, with its celebrated chef, Umberto Bombana, also receiving the Lifetime Achievement Award. China (including HK), Japan, Singapore and Thailand each have nine restaurants amongst the top 50.

The six other HK restaurants that made the cut are Lung King Heen (17), Ta Vie (33), L’Atelier de Joël Robuchon (41), The Chairman (47) and – one of only 10 new entries this year – Ronin, debuting at number 45. May Chow of Little Bao and Second Draft was crowned Asia’s Best Female Chef. 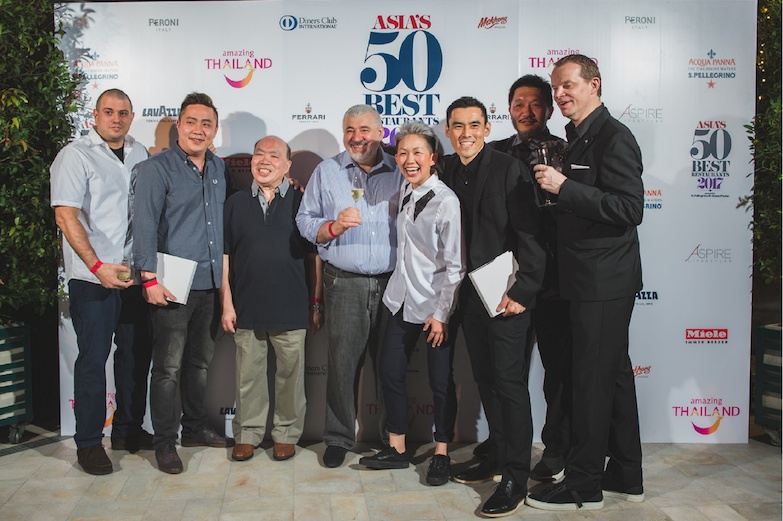 Like the Eurovison Song Contest, the Oscars and the Michelin stars, the 50 Best Restaurants list is highly controversial and, we may argue, political. For us, the most glaring addition in the top 10 is Burnt Ends in Singapore. Sure, it’s a great BBQ joint, but we’ve had the same or better at eateries across North America. We’d like to know what made it so special to the judging committee, which we’re told is made up of ‘an influential group of over 300 leaders in the restaurant industry across Asia’.

The winner for a third consecutive year, Gaggan, is indeed excellent, but it showcases Indian cuisine in Thailand. Shouldn’t more Indian restaurants in India be featured?

With the awards ceremony held in Bangkok each year, there seems to be a bias towards restaurants in Thailand, which this year holds nine spots on the list – the same as Japan, which is arguably THE best dining destination in the world. In our view, restaurants in Tokyo should dominate the top 50 and even the top 10 (the top 10 this year skews towards Singapore). At number 46 on the list is Wasabi by Morimoto – a Japanese restaurant in Mumbai – you get the picture.

We think the HK restaurants on the list are generally places we’ve enjoyed and would recommend to others – with Amber and Ta Vie being the most noteworthy for us – but are they truly the best in Asia? We’re glad to see the addition of Ronin, but how can it compete with similar Japanese eateries in Tokyo or Osaka that didn’t make the cut? The lack of restaurants in China (and Chinese restaurants in general) is disappointing, with the only two on the list from Shanghai: Ultraviolet and Fu He Hui.