There’s an ancient Chinese saying that boasts Guilin’s scenery as the best under heaven, typified by limestone karst hills unique to this region. Any visit to this city should see its rural regions prioritised over its cosmopolitan counterparts, for this is where you get to witness a melding of nature and culture that truly characterises China. 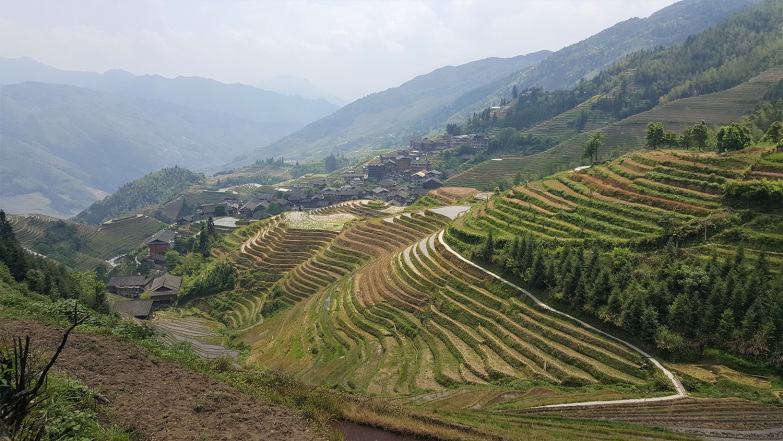 Dappled sunlight gleamed off the surfaces of the terraced fields, coiling along the contours of the dotted hills and dividing them into distinct layers of water and green rice shoots. These terraces were given the name Longji (Dragon’s Backbone) because they resemble the scales of a dragon. While these lands have largely shedded their true agricultural elements and are instead capitalised on for tourism purposes, the terraces still own over 2,000 years of history. It’s perhaps the perfect example of sustainable tourism: a conservation of natural and cultural landscapes that is, for now, untainted by hugely overwhelming hordes of tourists. The rich diet is signified by the Longji Sibao (four Longji local specialities: Yunwu tea, pepper, rice wine and glutinous rice). 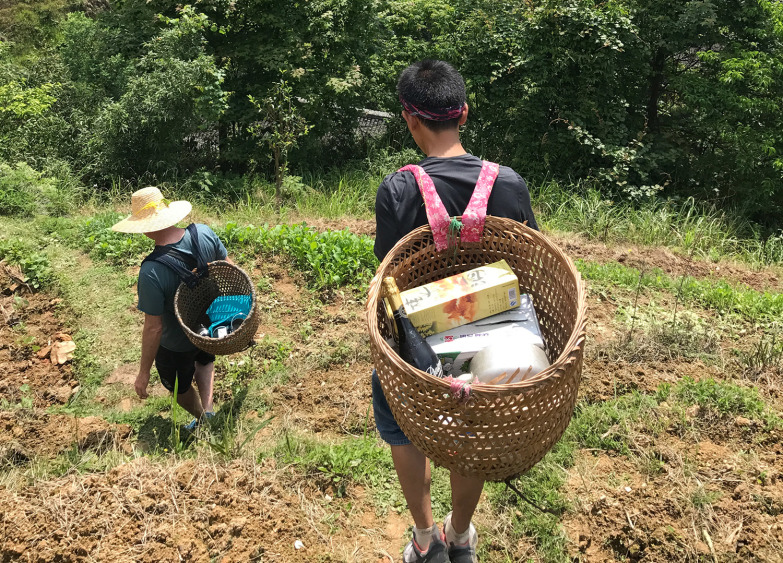 There’s nothing quite like waking up to a  screensaver-worthy view of Longji's hilly slopes and seeing the breathtaking network of layered rice terraces that have developed over a period stretching back as far as the Yuan Dynasty. The perspective from our hotel’s wooden deck, located over 600 metres above sea level, offered an unrivalled sense of tranquility.

Up close, Longji’s green canvases form into winding trails and stone steps, intertwined with rows of fresh kai lan and string beans. The vegetables, all of which are organically hand-grown in rich soil free of pesticides and chemical fertilisers, are a reflection of the energetic, laborious spirit of the local community. With our douli hats on and the weather in our favour, we felt confident enough to take on some digging and planting of our own. Several women, each decorated uniquely in individualised embroidered aprons and colourful, embellished headpieces, looked on with amusement. Sinking our ankles into a flooded rice field and trying our hand at ploughing the mud was a particularly illuminating experience, requiring the navigation of an unfamiliar contraption made of several wooden beams.

Understanding the generations of skill, knowledge and vigor encompassing the art of farming inspired an appreciation for the ingredients that were used in our hearty meal later. Our guide, a gregarious, bandana-wearing local called Tony, efficiently butchered a live chicken, which was added to an earthy soup of freshly picked garlic chives, Chinese cabbage and tomato, all simmering on a wood-lit fire. The rice noodles added a starchy texture to the soup and mopped up the fresh flavours. 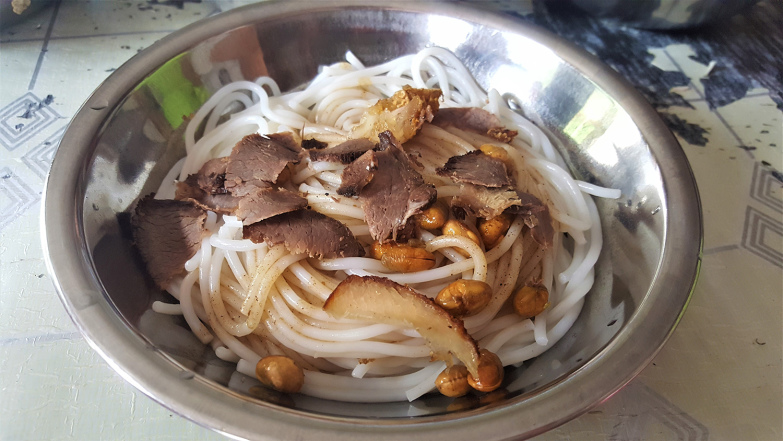 No visit to Longji is complete without a thorough appreciation of the staple food that the area’s iconic landscape has been designed and shaped to produce. As with most parts of southern China, rice forms an intrinsic component of the Guilin diet and is usually served plain with a variety of meat and vegetable dishes on the side. Characterised by fresh ingredients, mouth-watering sauces and a generous dose of wok hei (meaning “the breath of the wok”), Guilin’s cuisine is best described as a more flavourful, slightly spicier sister to its neighbouring Cantonese counterpart. 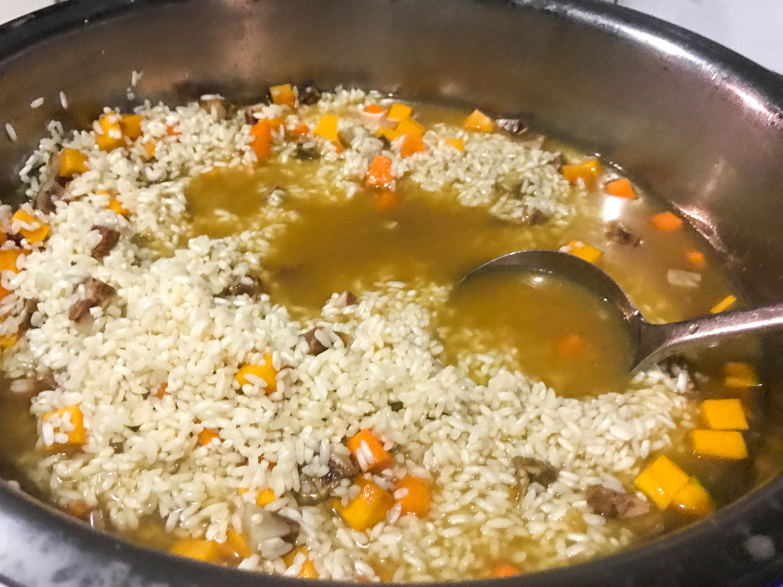 A more unconventional way of experiencing the region’s famed rice is to enjoy it hot from the hollow of a short bamboo stick. A soupy mixture of water, grains of black glutinous rice, carrot and meat is scooped inside a bamboo pole before corking the bamboo hollow with a shaved husk of corn. It is then cooked over an open fire, before being split open to reveal the fluffy, fragrant rice. 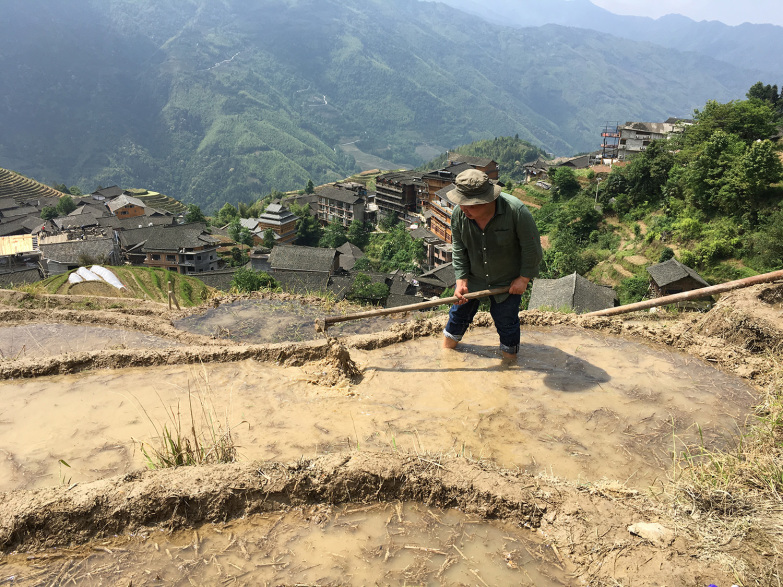 Truly veterans in the handling of rice, the brewing of rice wine using glutinous rice is also at the heart of Longji locals’ daily routine. The most traditional method of preparation involves extracting glutinous rice from local rice fields, feeding it into wooden baskets along with water drawn from streams outside villages and finally braising it with fire and fermenting it until milky white. A bamboo pole is inserted into the middle of the wooden basket where the fermented wine is allowed to stream down. The end product is sweet and fragrant and so easy to knock back that it will have you tipping over the edge before you know it.

The renowned Yijiang area along the Yi River is known for its majestic mountainous terrains, cascading waterfalls, canyons and rapids. Those up for a little physical challenge should opt to complete the journey on bike and raft the river through Wantian, a rustic agricultural district, as we did, where we passed lush villages, farms and bustling local street vendors. 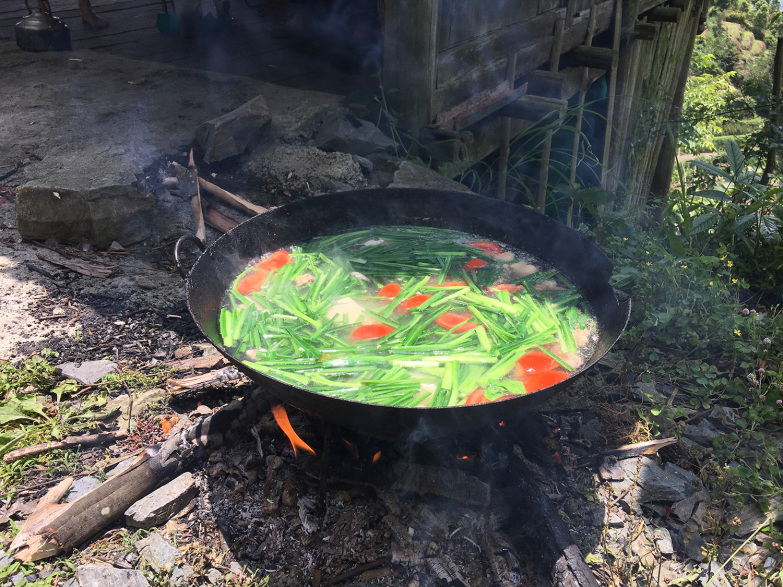 Earn your noodles by cycling to Guilin

Ping’an is an ideal starting point for a cycling trip because you start off high up in the mountains and coast down a series of pine and bamboo forests, before a short journey along the river and deep into the mountains again. The last stretch from Wantian to Guilin city is a much easier ride, on flat, concrete back roads through small villages, bustling marketplaces and farmlands. This was where we witnessed pastoral beauty in Chinese country life that is still largely unsullied by urban development and tourist attractions.

Stuff yourself with Guilin mifen

Guilin mifen (rice noodle soup) might just be the crown jewel of Guilin. The reputation for this type of noodle has spread so far and wide that many claim it the best noodle in the world. The mix of sour and savoury tastes in Guilin mifen is truly a sublime pairing. A staple amongst locals, the noodle soup is made by slow-boiling various ingredients that differ across shops but usually include pork, pig skin, dried tangerine peel, cinnamon and ginger. Condiments are then added on top, including shaved pork, fried peanuts or soybeans, pickled beans, chilli and chives. While much of Guilin’s cuisine makes use of Cantonese cooking methods, this is one of the few dishes that shares more features with its fiery north-western neighbour Guizhou, with its multitude of textures and pungent taste. 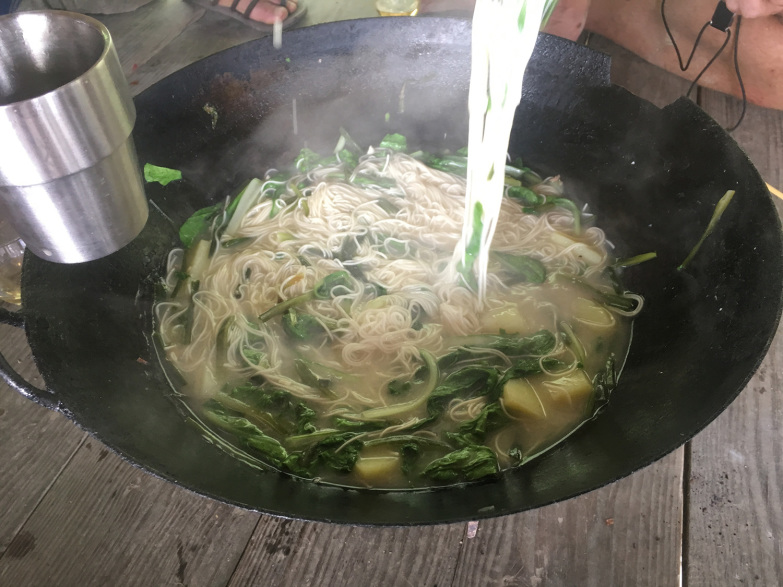 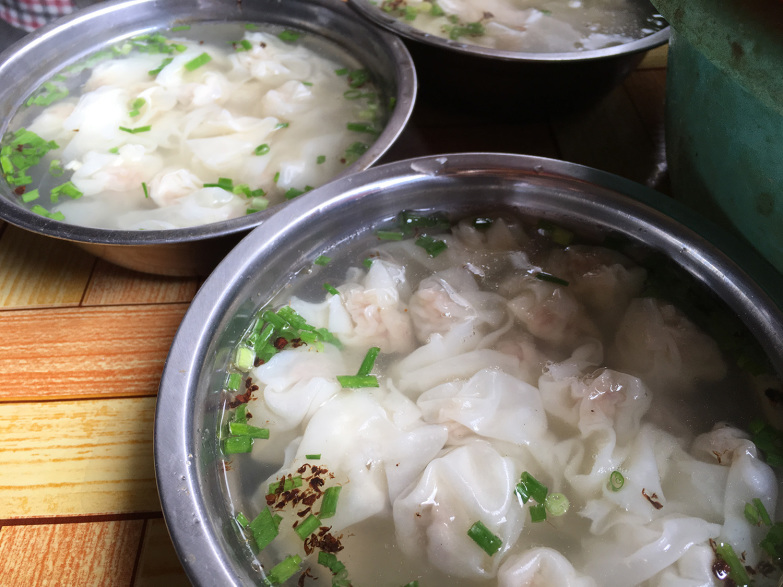 Take an unwanted bath by rafting down the Yi River

On the way to Wantian we hopped on a rubber raft and drifted down the Yi River, surrounded by the grandeur of towering canyons. It was a weird clash of senses – the thrill of the white-water action combined with the serenity from taking in the scenery in all its glory.

Our visit to Liu Sanjie Tea Plantation sadly marked the end of our grand Guilin adventure. Luckily, an enlightening lesson on tea planting and brewing was fascinating enough to distract us from our looming departure back to Hong Kong. We were surprised and delighted to learn that the different types of teas that we normally drink (black, green, oolong, white and so on) are all brewed from leaves that derive from the same plant. The unique character of each type of of tea comes from the part of the plant from which the tea leaves are picked. White tea, for example, is made out of a tea plant’s smallest buds. The miniscule size of white tea leaves and the hardly noticeable hairs on them are associated with health benefits such as detoxing and reducing blood pressure and cholesterol, as well “clearing away heat” – a concept ingrained in Chinese traditional medicine.

At the end of our tour around the farm, we sat down to digest our new-found tea knowledge with some of Liu Sanjie’s signature hand-picked teas. We sipped from tiny glass cups of ginseng oolong tea, followed by a lychee and rose tea, before the highly anticipated white tea. Although we appreciated the subtle sweetness of the smooth lychee and rose, as well as the lightness and delicate aroma of the white tea, we particularly enjoyed the depth and roundness of the ginseng oolong.

As with most traditional folklore, the tale of Liu Sanjie (directly translating to “the third sister of the Liu family”) has many versions, shifting and flowing with each telling of the story like a game of Chinese whispers. Most versions of the story, which originates from the Zhuang ethnic group, features Liu Sanjie as a beautiful, talented folk singer with an enviably sweet voice and the elegance to match. No matter what version you get, Liu Sanjie’s story is a charming one that has been immortalised in plays, ballads, films and even at a local light show you can experience.

This tour was organised by Bike Aways, which specialises in cycling tours around China and Asia. Their focus is on the appreciation of heritage and sustainable traditions and their tours are rooted in creating down-to-earth, authentic experiences.