Mention the name Sabatini and many long-time Hong Kongers will know exactly which restaurant you’re talking about. This TST stalwart, located at The Royal Garden hotel, has been around for over 25 years, serving Roman-style comfort food to many happy guests. Recently, Sabatini has appointed Claudio Favero as its new chef de cuisine. Chef Favero has joined from Michelin-starred Don Alfonso 1890 in Naples. At the moment, Sabatini’s menu remains the same, but guests will be able to try Chef Favero’s cooking via a limited-time six-course Chef Claudio’s tasting menu ($1,380/person) until 31 July 2018. Recently, we had the opportunity to try this menu for ourselves. 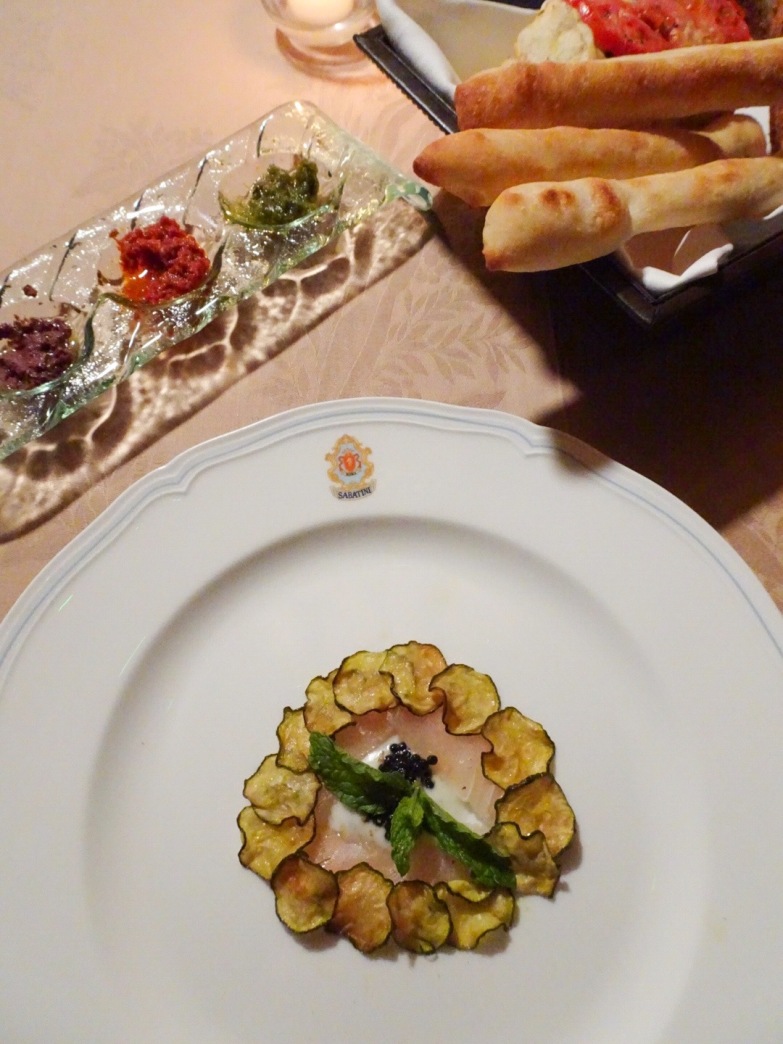 We started with the ricciola affumicata con zucchine, erba cipollina, yogurt al limone e caviale. This smoked kingfish with marinated zucchini managed to be smoky, creamy and tart all at the same time – very tasty. 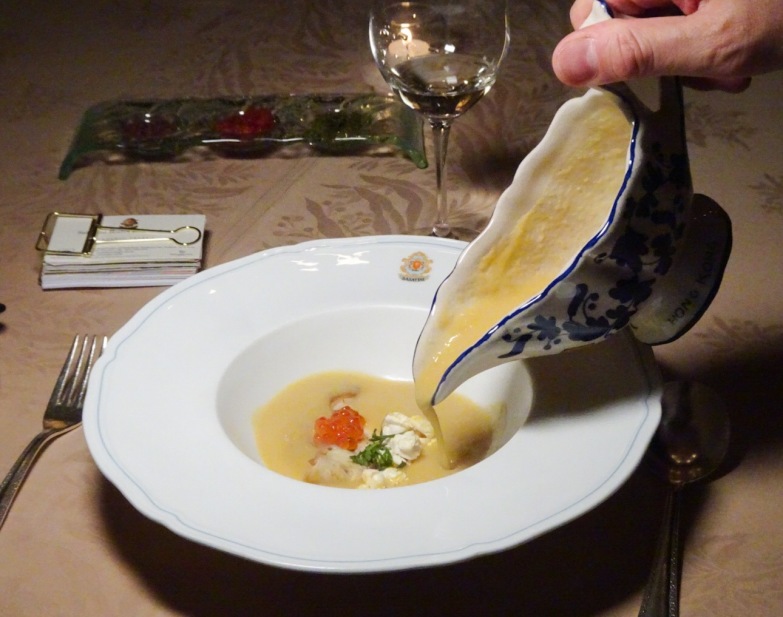 The creaminess of the zuppa di mais con polipo e coriandolo, or corn soup, was accented by tender grilled slices of octopus and salty nuggets of roe. The only thing that didn’t work for me was the addition of popped corn (the kernels were a bit stale). 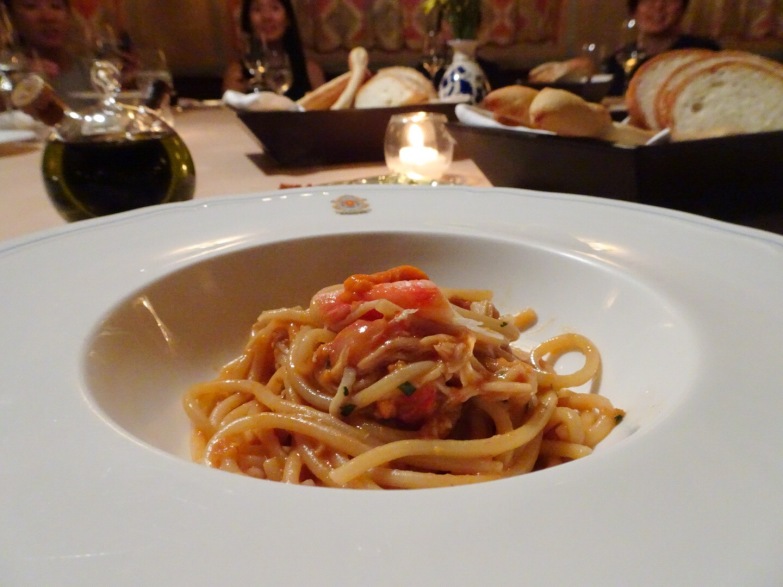 This spaghetti con polpa di granchio e ricci di mare, or spaghetti with crab (from Alaska) and sea urchin (from Japan), may not look like much, but it was close to perfection. The al-dente texture was exactly as it should have been. The sauce was fresh and flavourful, with an olive-oil base (rather than cream or butter), allowing the natural flavours of the seafood to shine. 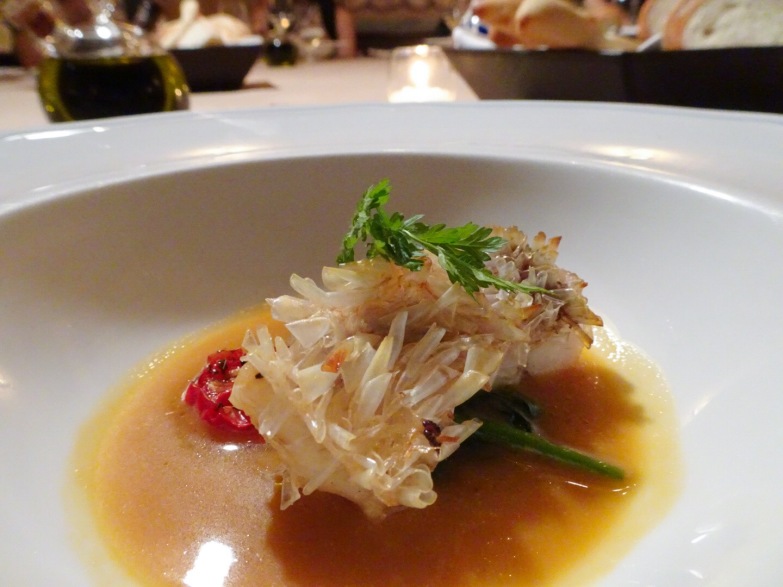 Moving on to the main courses, the filetto di amadai con spinaci novelli e salsa allo zafferano was well executed. The amadai fish fillet was very moist and its flaky crust was delicious. Note that there were still a few bones in the fillet, so beware if you’re feeding this to children. 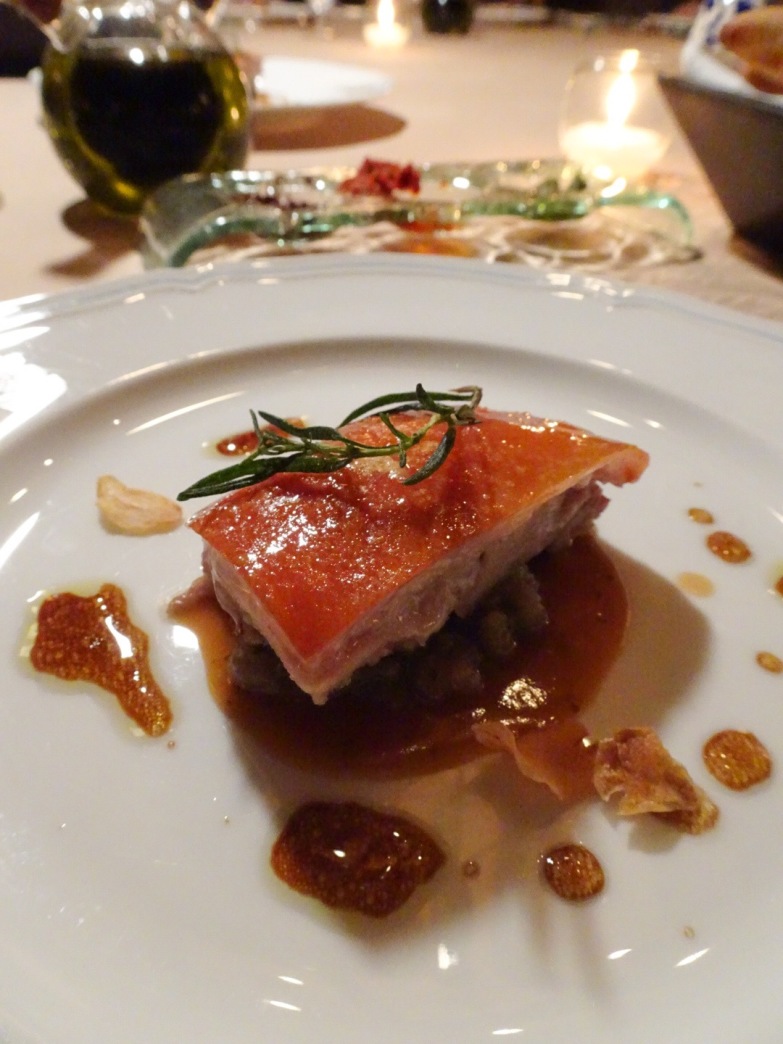 The second main course was the maialino croccante con purea di melanzane e salsa alla mostarda di Pommery. Crisp roast pork is always a crowd-pleaser, and this one was served with garlic chips and a touch of balsamic to help to cut the richness. The meat itself could have been a bit more tender and fatty, but perhaps guests can request this cut when they order. 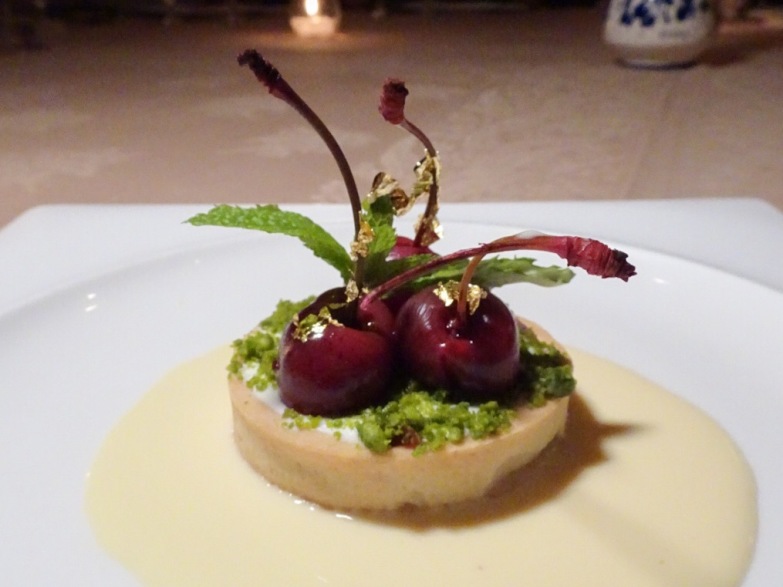 We ended with the torta di ricotta e ciliegie Bell’Italia con salsa al limoncello, a beautiful cherry and ricotta tart with limoncello sauce. This was delicious, especially the cherries, which had been cooked in a Chinese five-spice mixture before being layered in the tart’s filling as well as placed on top.

Afterwards, guests are served coffee or tea with a selection of house-made chocolates and biscotti. Don’t skip the truffles or the biscotti (you’ll thank me later).

From the welcome bread basket to the goodbye biscotti, Sabatini proves that it has been a Hong Kong favourite for 25 years for many reasons. Chef Favero has shown that he understands Sabatini’s classic style while having some exciting things up his whites. We’re excited to see how Sabatini evolves under his tenure.

Amp up your veg with a meaty stuffing