Restaurant Review: A Side / B Side

Despite Hong Kong’s sweaty summers, I’m still willing to trek around the steep streets of Sheung Wan for the right reason. The streets in this area are so charming, often filled with independent galleries, antique shops and, of course, restaurants. On a recent evening, I wandered up Sai Street to visit the understated A Side / B Side. 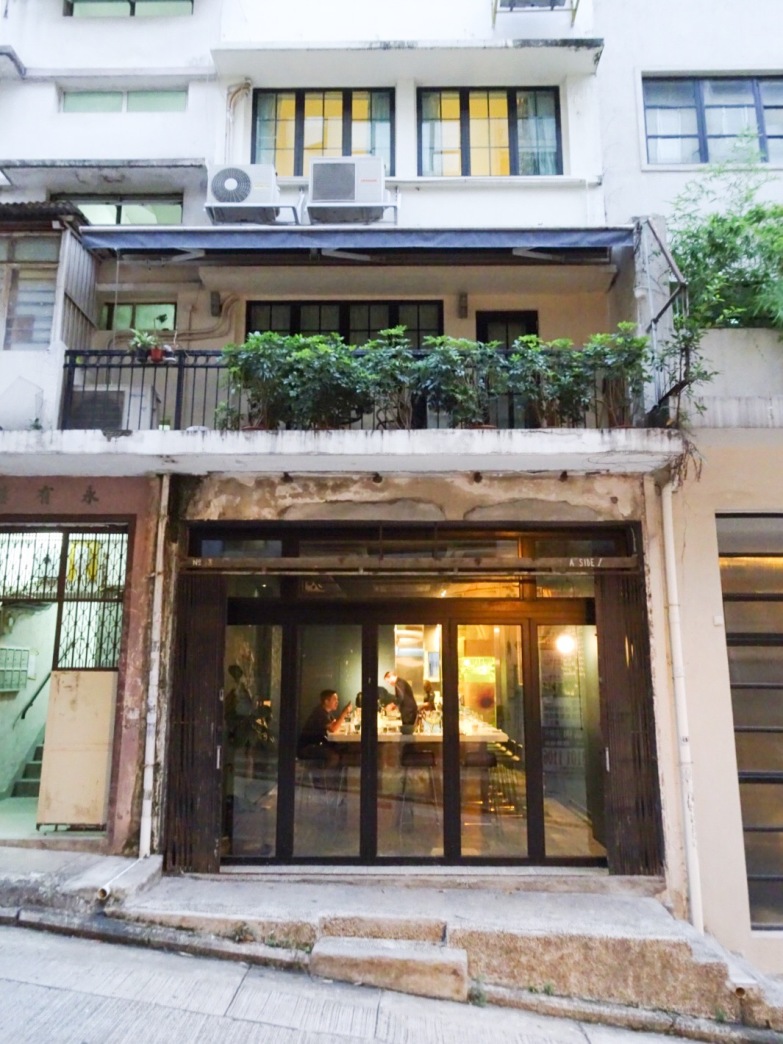 Before I moved to Hong Kong, Sai Street was one of my favourite streets as a tourist because it has so much character. There was bright paint from new restaurants, aged metal doors fronting dated walk-ups, rough concrete steps lining the street and so on – a great mix of old and new – and I’ve also seen a fair few photography/fashion shoots there over the years. Today, it’s sad to see some shuttered businesses, but A Side / B Side remains at the top of the street (across from long-standing gallery Sin Sin Atelier).

The space and the chef

Guests are seated around a large open kitchen, but it’s not overly hot or steamy. The restaurant seats around 15 people in total, and the chef, Jon Irwin, and his assistant are a small but efficient team handling everything. Jon’s worked at Michelin-starred restaurants including Akrame (both the Paris and Hong Kong locations) and now showcases his creative cooking as both the managing partner and chef de cuisine at A Side / B Side. 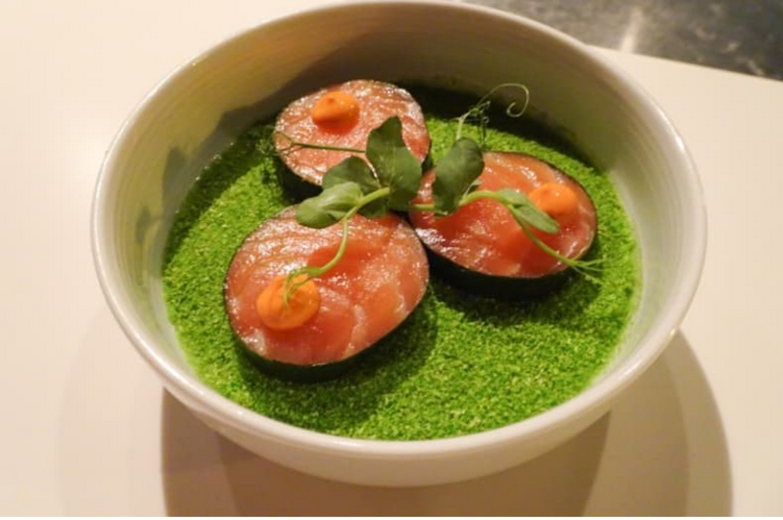 First up was Norwegian salmon with avocado, apple and cucumber jelly. The salmon was very fresh and fatty, delicious with the thin layer of nori surrounding it. It contrasted well with the spa-food-like jelly, though the cucumber taste was quite strong and may not be to everyone’s liking. 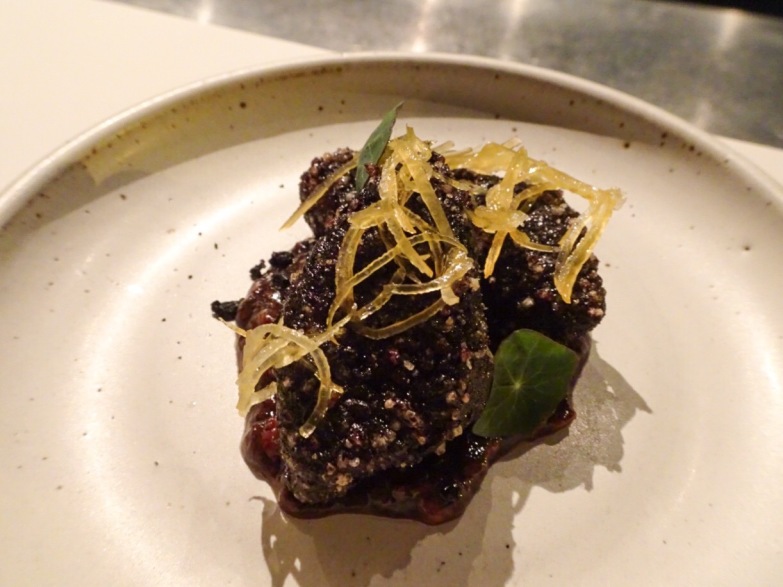 The foie gras nuggets were fantastic! Each nugget contained a sinful amount of foie gras and had a fragrant, chewy crust. The sauce underneath the nuggets was made of strawberry and black pepper, while some lemon zest sprinkled on top helped to cut through the richness. This was a very special dish. 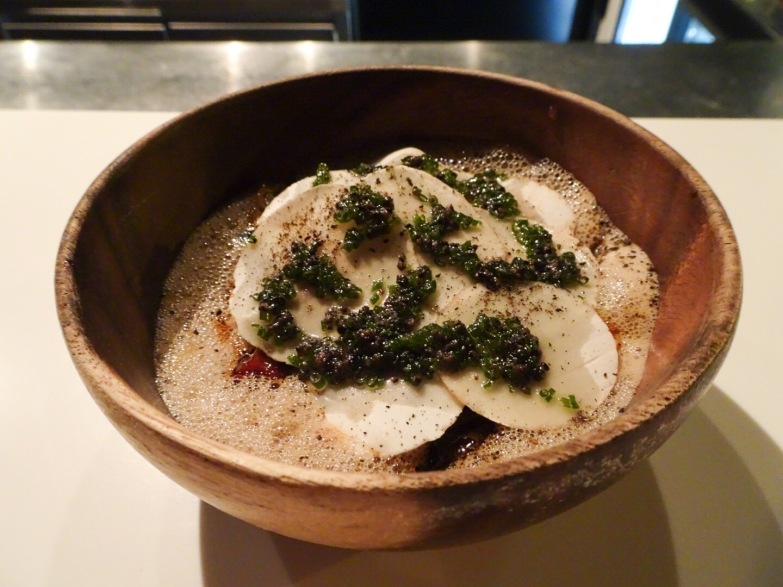 I consider this warm mushroom salad to be like a forest in a bowl. The base was made up of chopped mushroom “soil”, where snails and chunks of Madeira-glazed mushrooms lived, and the whole dish was protected by thin mushroom “leaves” (carpaccio). There were many textures in this dish that took some getting used to, but the overall flavour was very pleasing. It was rich and intense, sweet and savoury and very moreish – one of my favourite dishes of the night. 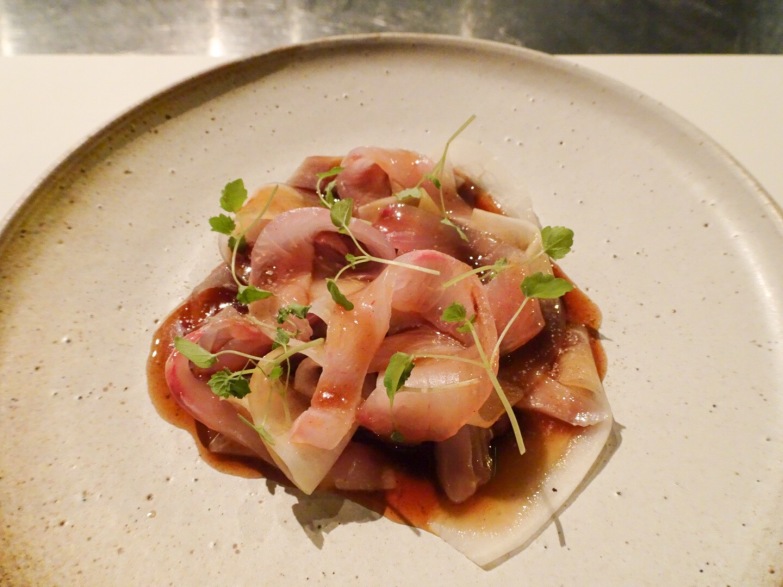 The first main was strips of raw hamachi with radish ribbons in a honey dashi sauce. Unfortunately, the hamachi was warm (maybe from the sauce?), and the natural sweetness of the radish was a bit much against the sweetness of the dashi.

The second main was French pork belly with asparagus (sliced, in a purée and served whole). It smelled so good that I ate the whole thing without remembering to snap a photo. Oops. But the main thing to know is that the pork used was of great quality, very soft and tender and cooked in a way that allowed the natural pork flavour to shine through.

For dessert, we were served a truffled chocolate mousse. The mousse itself was intense and addictive and had a “can’t quite put my finger on it” quality. Artichoke and dried apple slices added that something extra.

Eating at A Side / B Side is an opportunity to try some inventive dishes. Currently, only the four- and six-course chef’s menu is offered for dinner (lunch is by appointment only), but I’d love to see à-la-carte options available in the future since the prices of the chef’s menu are pretty steep. Many of the dishes are intensely flavoured and have an unusual mix of tastes and textures, so A Side / B Side may be a better choice for more adventurous diners. Those looking for out-of-the-ordinary dishes – and who are willing to take a risk eating out of the box – may enjoy trying this intimate spot in Sheung Wan.