You know where I'd like to be this summer? Barbecuing in the forests of Northern Portugal where the sun is shining, the vibe is relaxed, and the air is smokey with the smells of grilled chorizo and piri piri chicken. At least that's what I was thinking as I sampled Casa Lisboa's new seven course "Taste of Northern Portugal" summer tasting menu ($488 per person) and three of their other summer specials.

As a fairly recent transplant to Hong Kong, I'd never been to the restaurant but soon learned it has a reputation for some of the most authentic Portuguese food in the city. My hopes were high, and I could hardly wait to start eating. Ten courses, yes please! 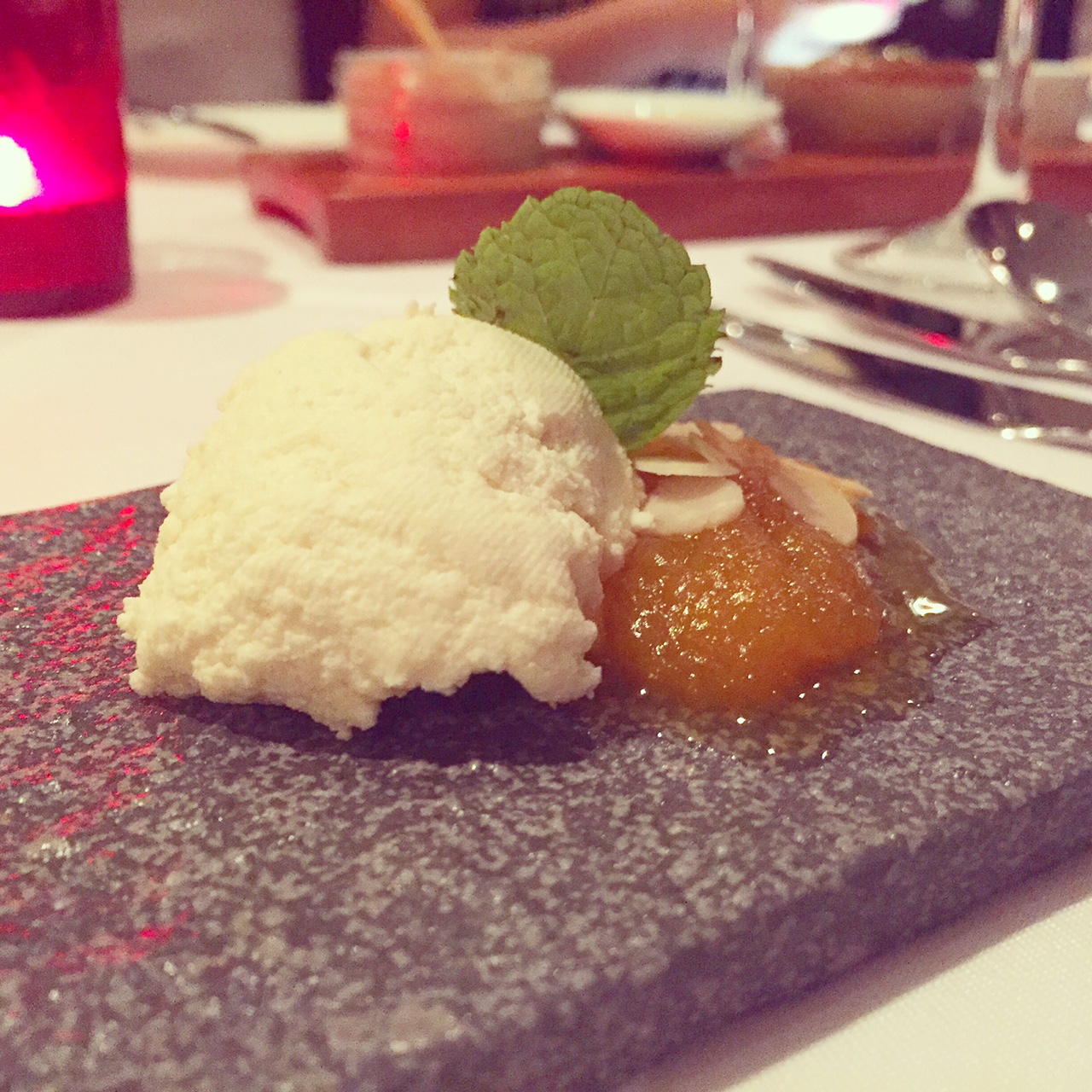 The tasting menu started with homemade requeijão (a Portuguese fresh cheese) accompanied by pumpkin compote. The cheese was creamy, crumbly and very light – absolutely delicious. In contrast, the sticky compote provided a complementary texture though I thought it was a tad too syrupy to eat so early on in the meal. 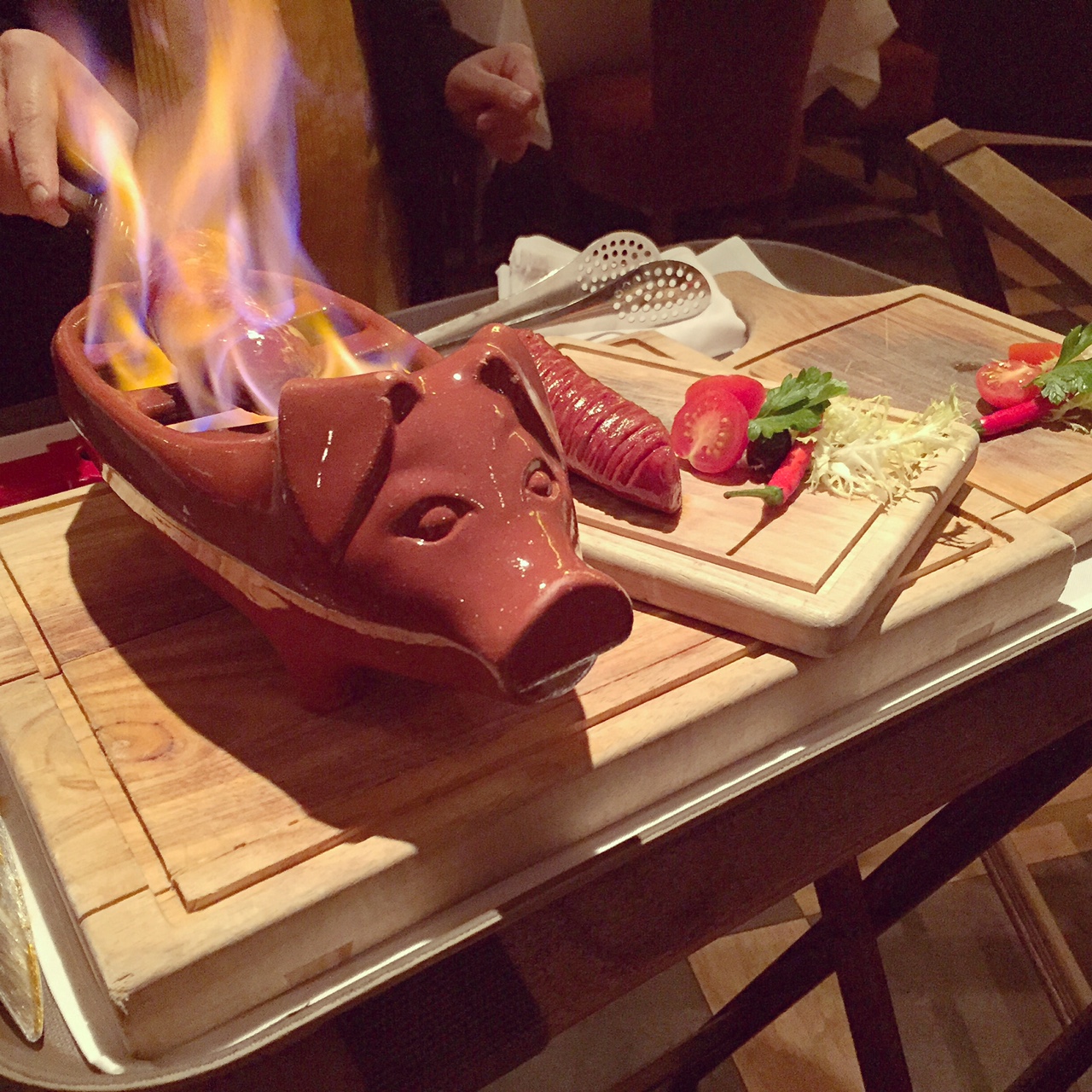 Next up was the chorizo flambée with sausages made from black iberico pork (a summer special, +$150). This dish disappeared quickly! Roasting the skin gave the chorizo slices a perfect chew. 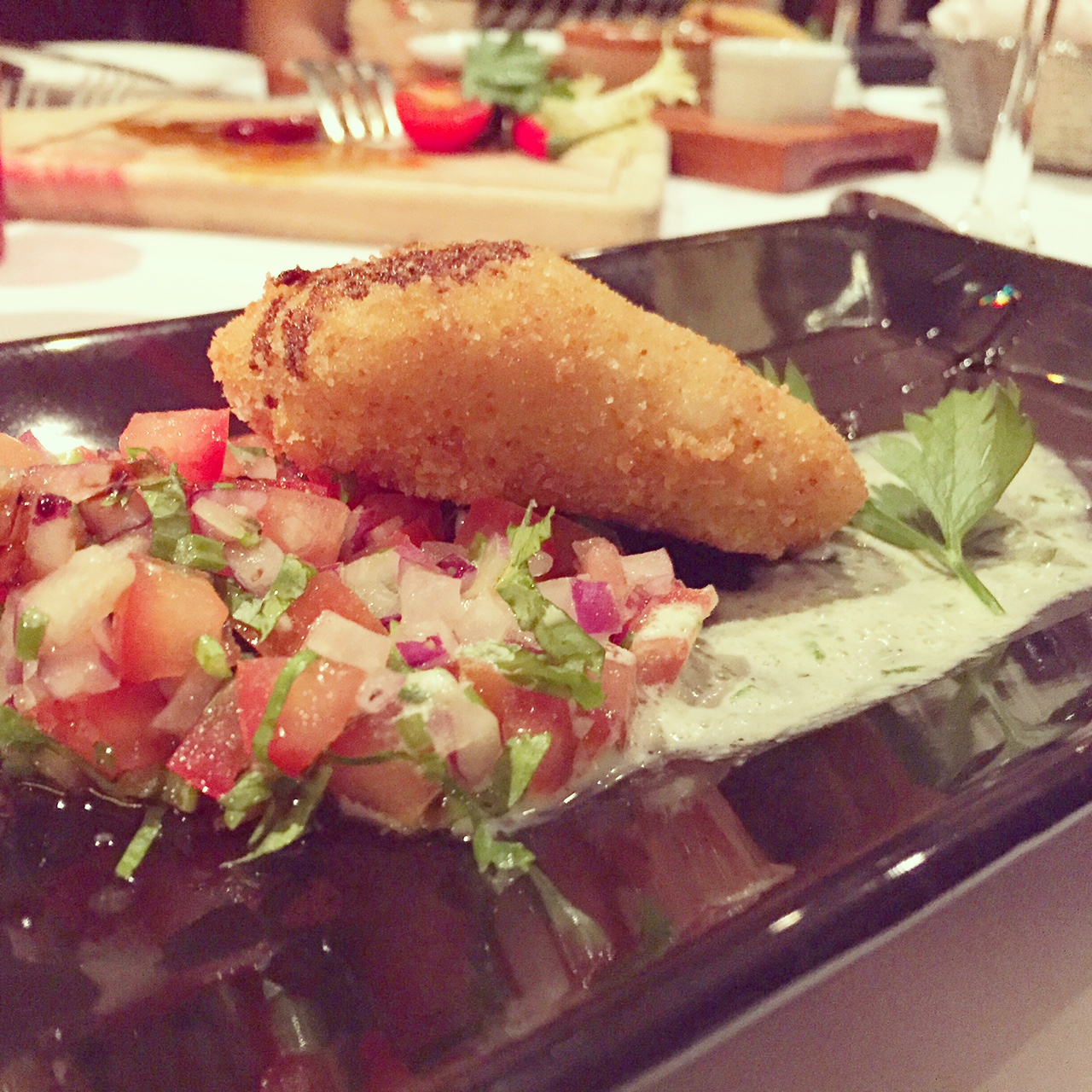 The second dish on the tasting menu was shrimp rissois accompanied by tomato tartare and coriander sauce. While the rissois could have been fried more crisp, the flavours present were lively and the accompanying salsa was fresh and sharp. 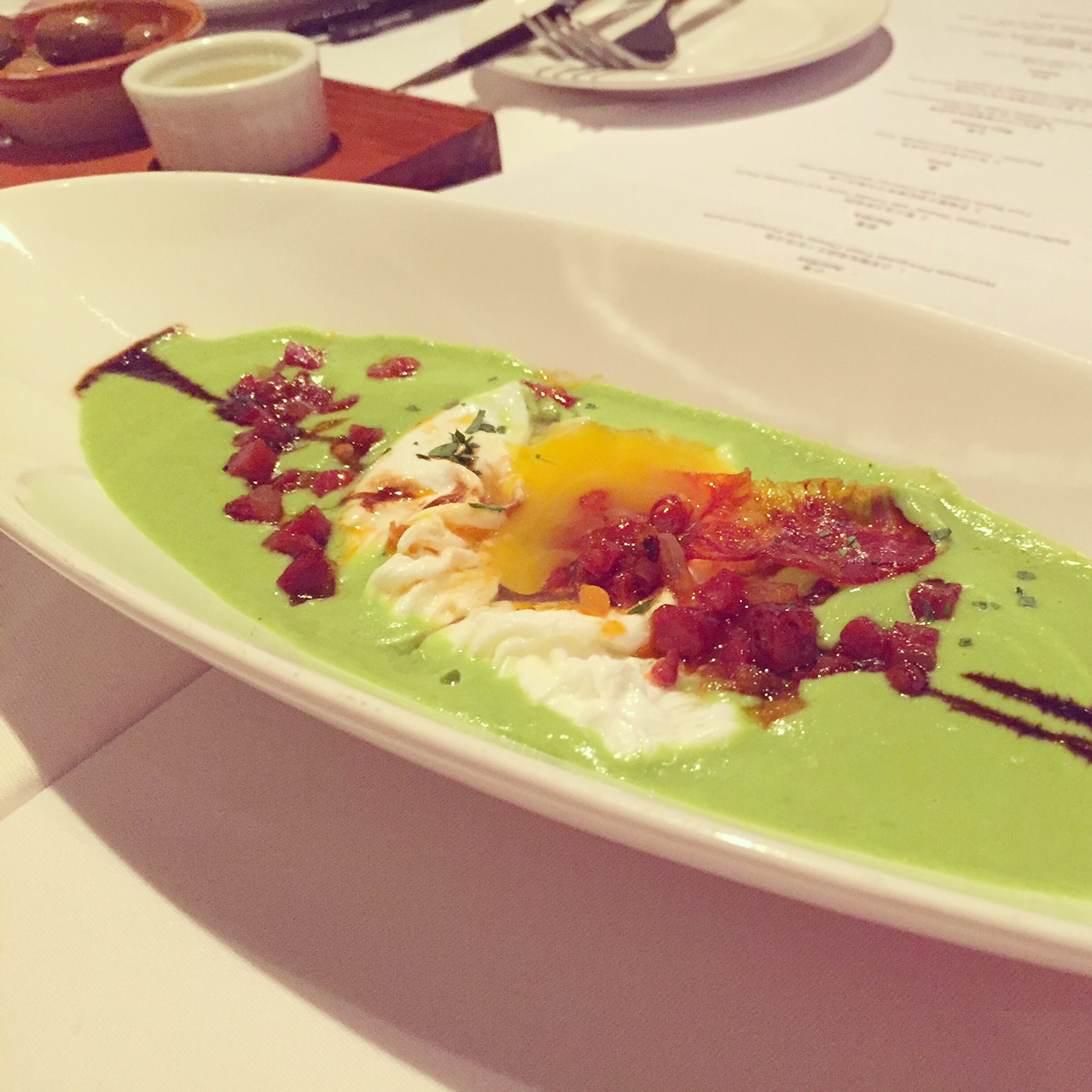 When the third dish on the tasting menu was brought out, a few at our table thought it was a soup. Rather, this fava beans cream dish topped with chorizo, a poached egg and bacalhau (cod) was spooned onto our plates. The texture made it a bit difficult to eat this way, but it was enjoyable. The ingredients complemented each other, with the runny egg yolk adding an especially tasty density to the dish. 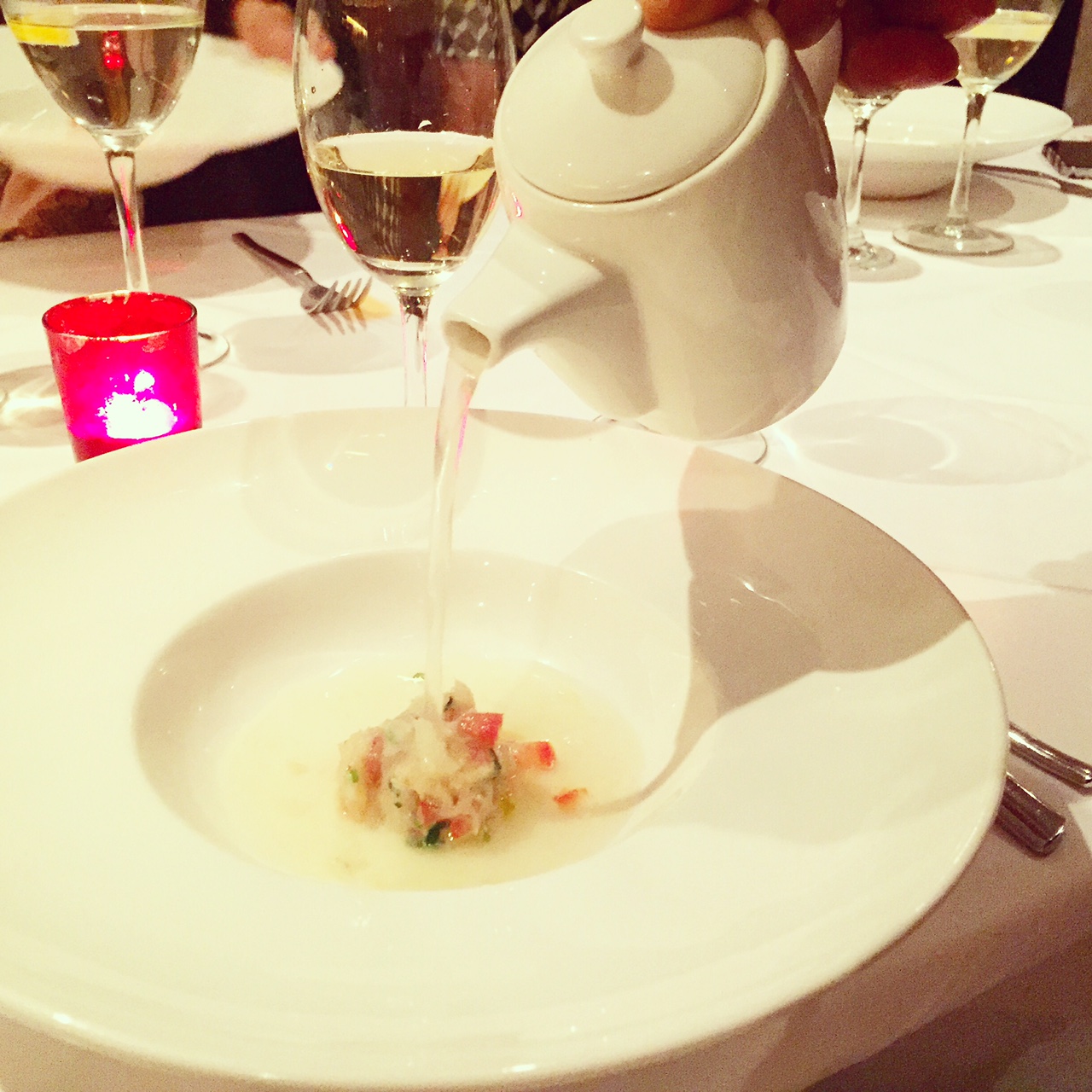 After having a small sample of bacalhau in the fava bean course, it was the star of the fourth dish accompanied by tomato and coriander. While impressive looking, the finished product was a mild, broth-based soup. Perhaps the richness of the previous dishes had overwhelmed our taste buds, but this dish was a bit underwhelming. 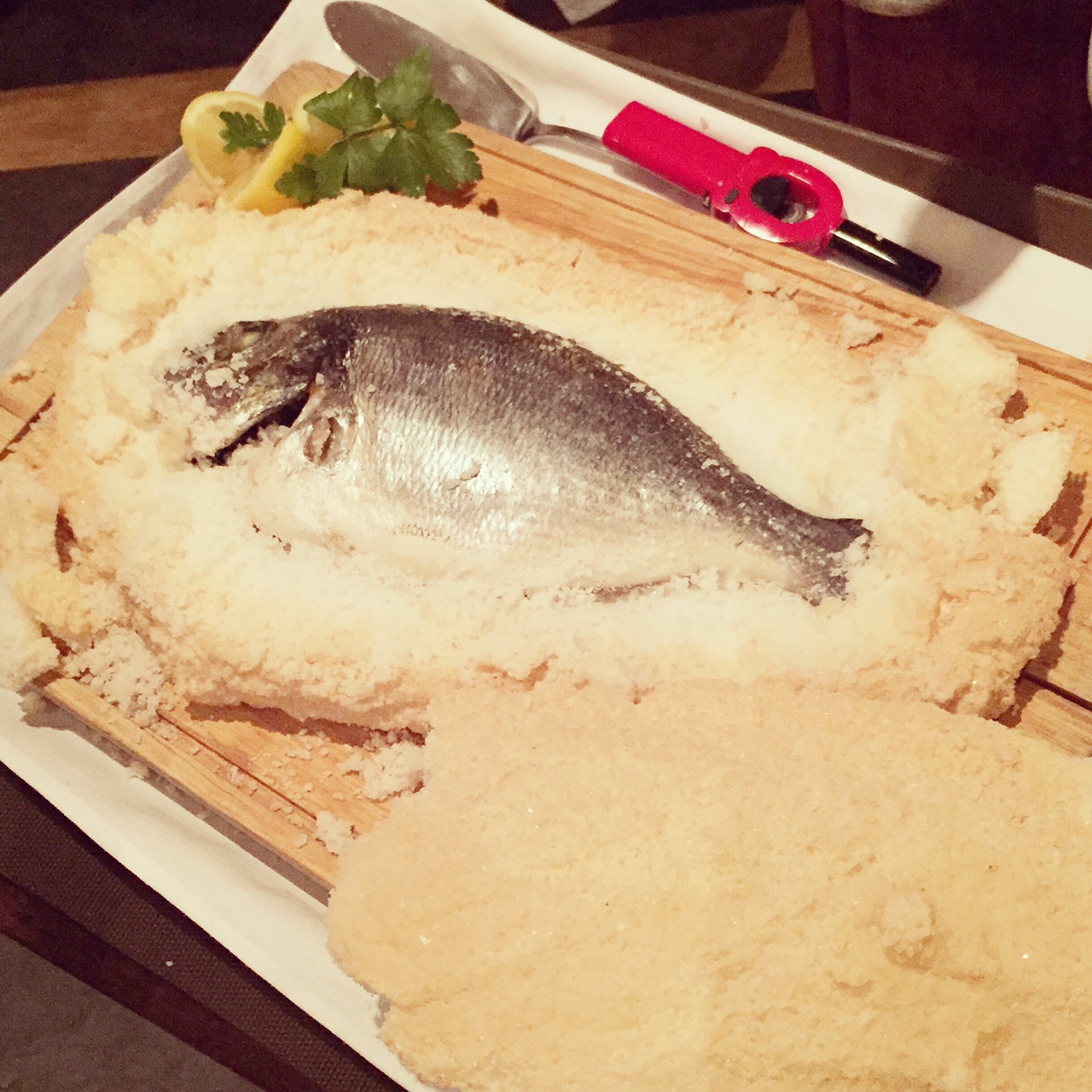 All eyes were on the Altantic seabream (another summer special, +$450) when it was wheeled out in its salt crust. The restaurant staff expertly removed the fish, and what was served was some of the moistest fish I’ve ever eaten. The natural flavour of the seabream shone through with no need for extra garnish. 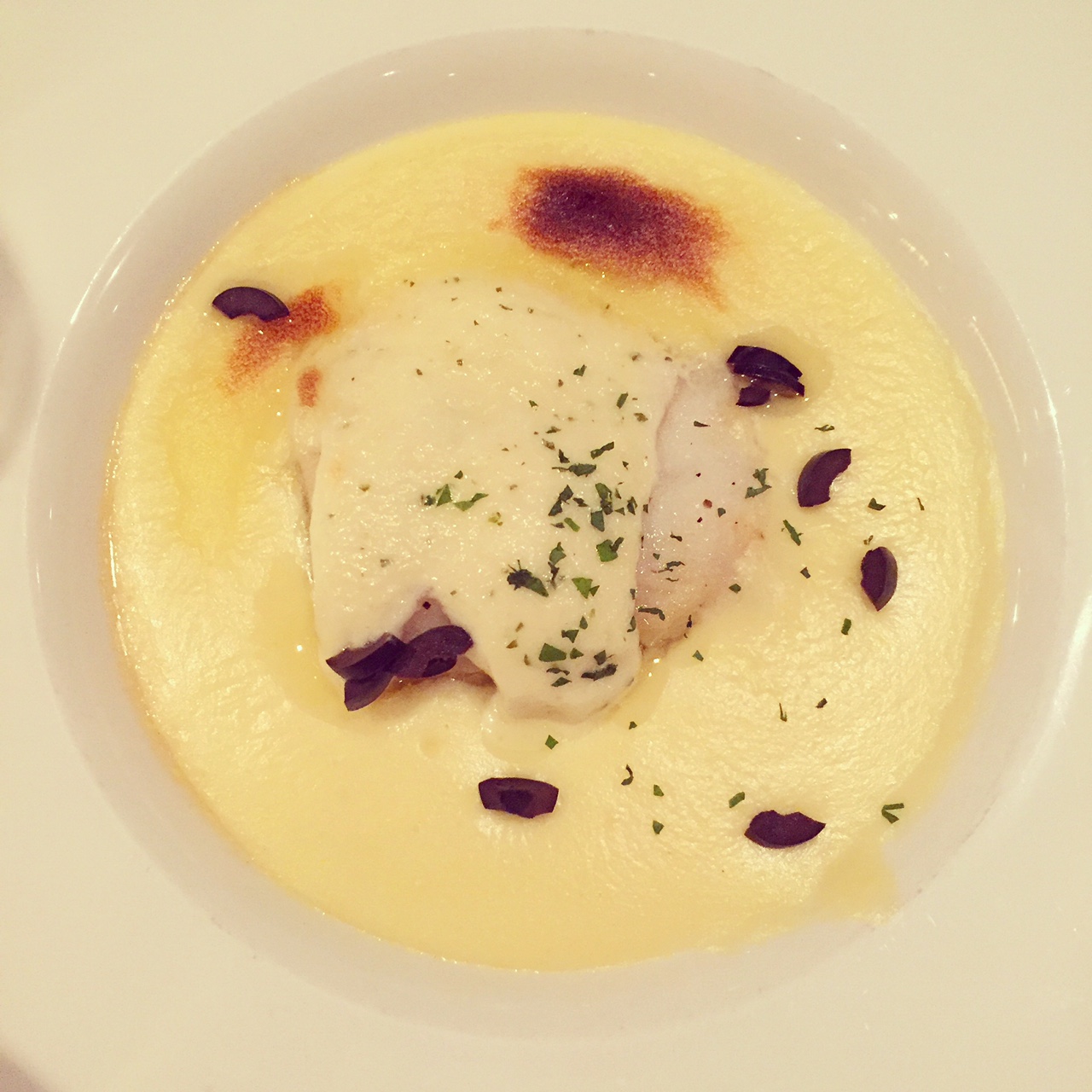 While I was ready for a change after so many fish courses, the third bacalhau dish ended up being a clear favorite of the night. It was served Ze do Pipo style, named after the chef who created it. Basically, a delectably buttery potato puree was topped with a bacalhau fillet and mayonnaise, before being baked so the flavours fused together. Incredibly delicious! 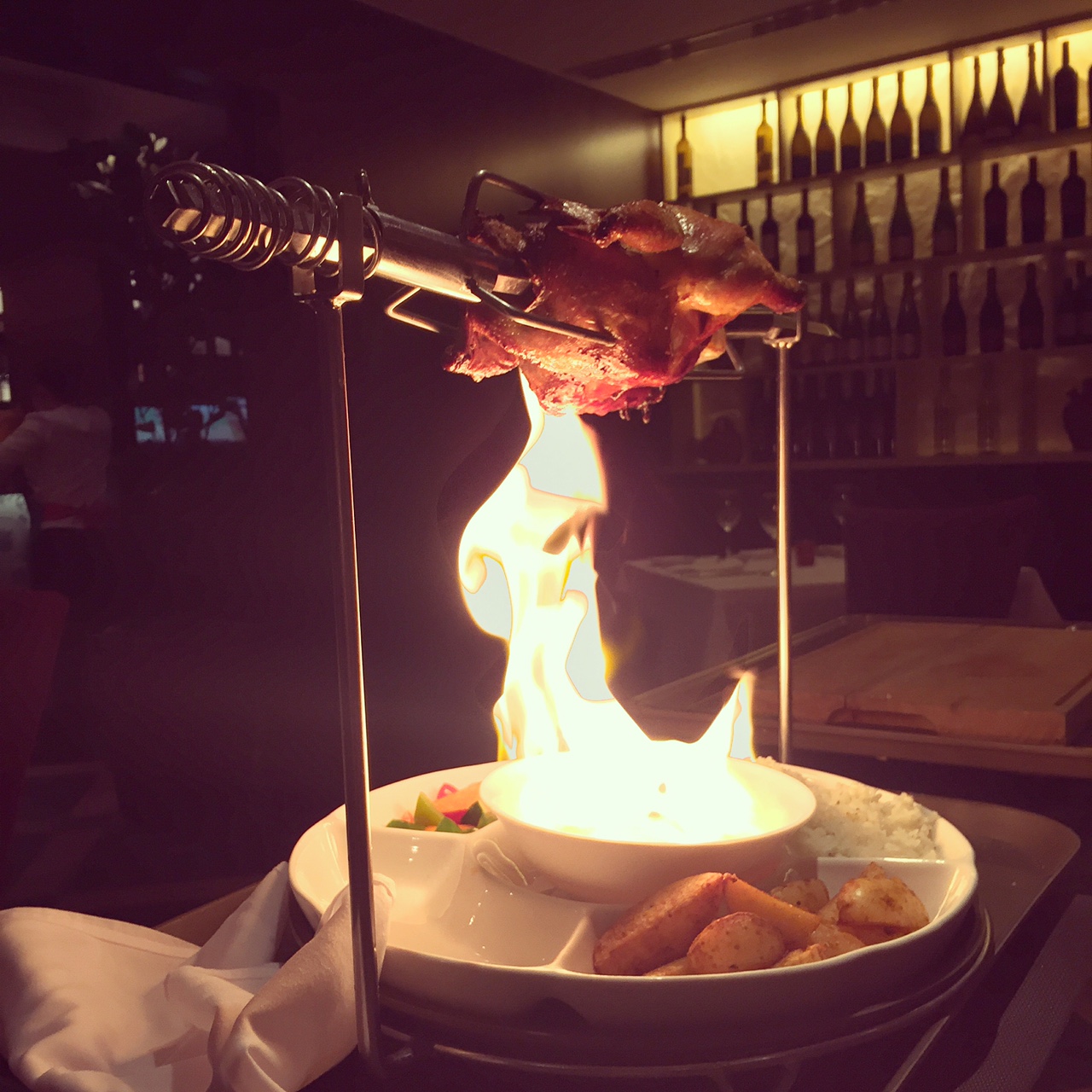 Our last dish off the summer specials menu (+$450) was the piri piri chicken. The skin was crisp and the meat was tender – a perfect roast chicken. As for the sides, the potatoes and salad were decent, but the rice was a surprise star. It was sticky and chewy, each satisfying bite fragrant with garlic and chicken fat. 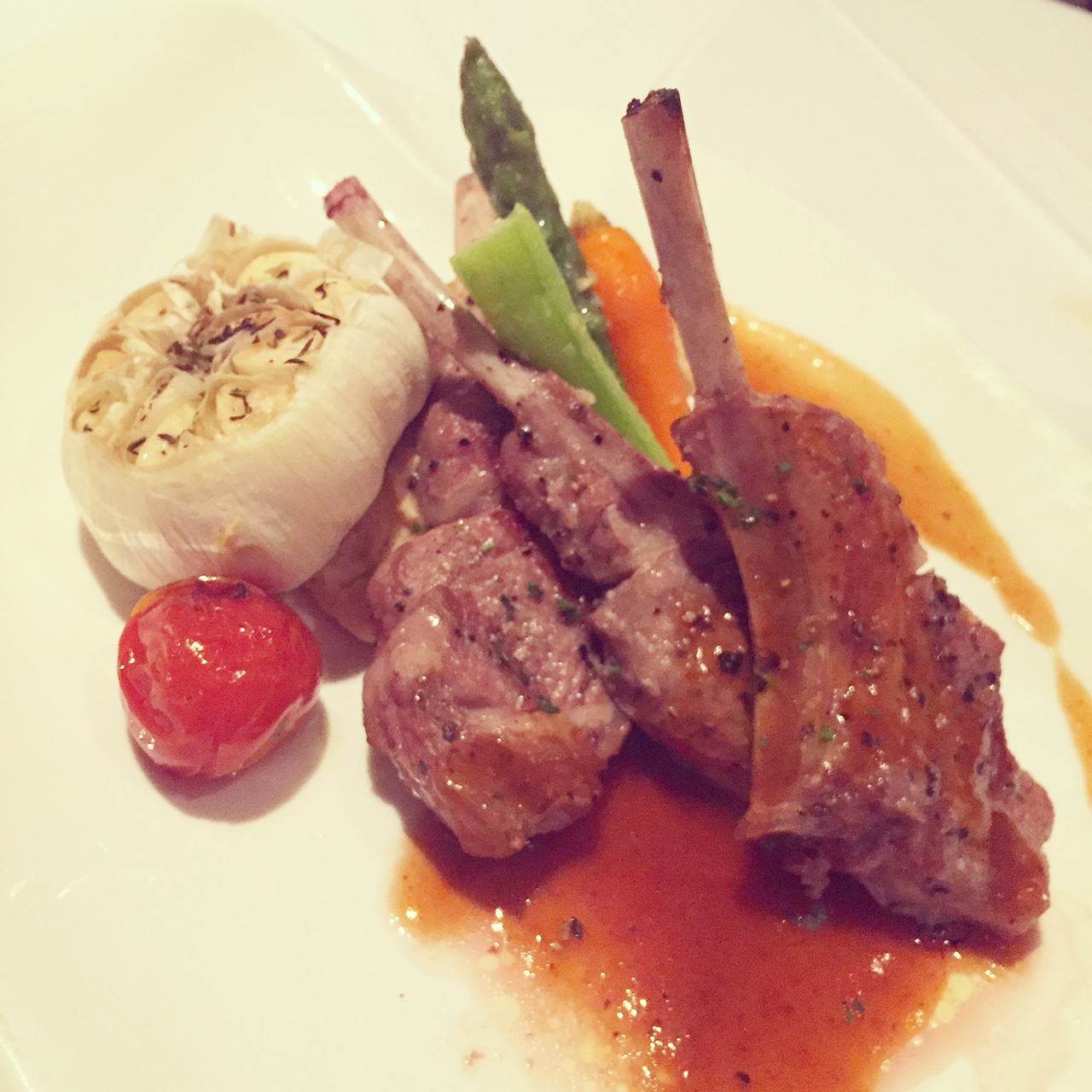 The main course off of the tasting menu was flame-grilled baby lamb. While it had good flavour, the meat was a tad tough. I loved the accompanying sides here too, and couldn’t stop mixing in the roasted garlic cloves with the chickpea mash. Though I was extremely full at this point, I made room for a few extra bites. 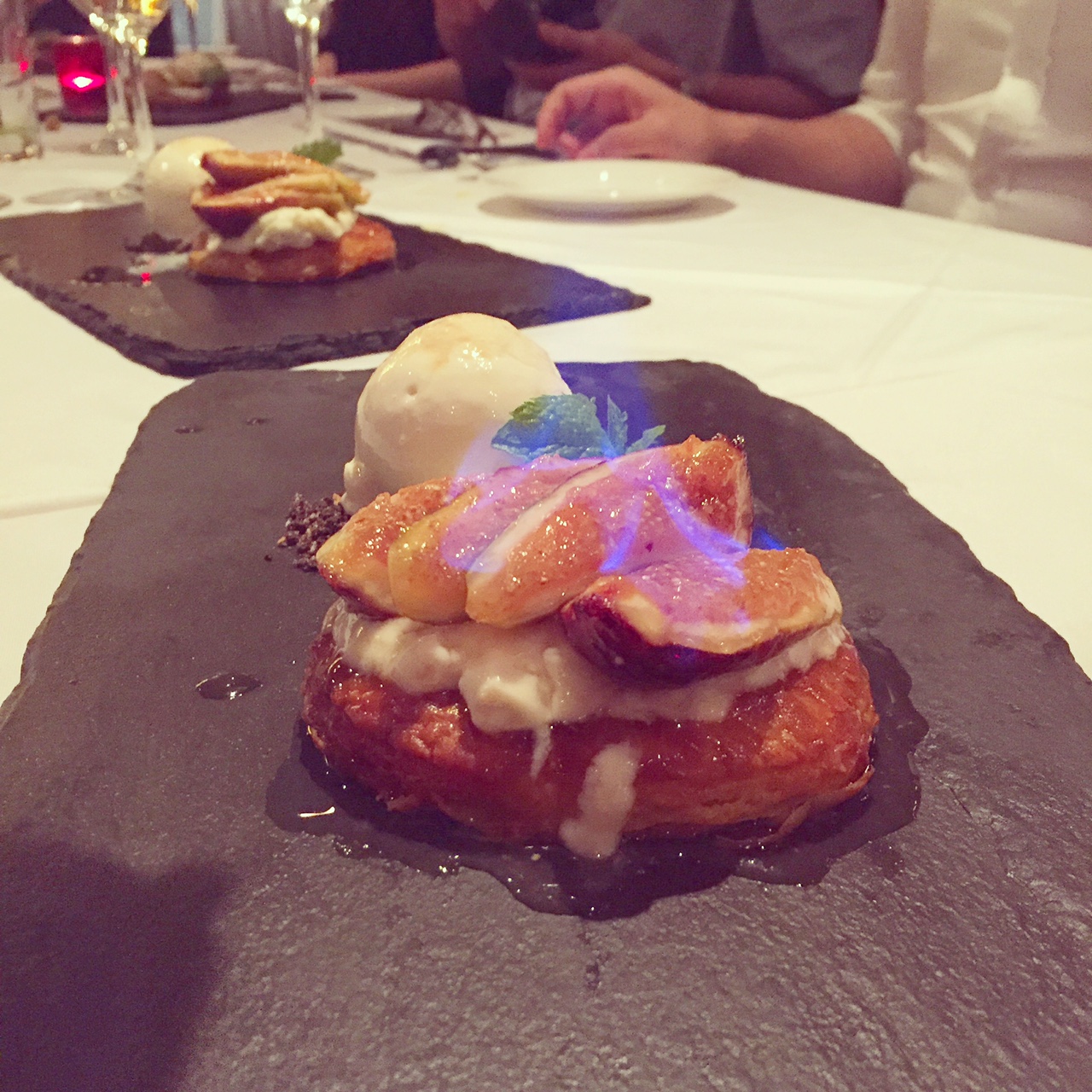 Like many of the dishes, dessert had a hearty, rustic quality. Fig tart with vanilla ice cream (part of the tasting menu, or +$85 à la carte) might sound simple, but this dish included goat cheese and nuts, which resulted in a heavy but satisfyingly tasty end to the meal.

While not light, the tasting menu and summer dishes are unique and flavourful. If you’re new to Portuguese food and looking to expand your culinary palate this summer, Casa Lisboa's new summer menu is worth a try.