What to Expect at Test Kitchen

Plus a review of the recent GLASS pop-up dinner

Hong Kong is a city full of people who like to eat. Whether tastes run high, low or somewhere in between, there are many restaurants working hard to satisfy demanding appetites. In a place so used to quality cuisine, how can a restaurant stand out? How about by hosting pop-up dinners cooked by up-and-coming chefs from around the world?

If you haven’t heard of Test Kitchen yet, it’s worth looking them up (and reading previous Foodie pieces on their dinners). In 2015, former auditor Vincent Mui started hosting pop-up dinners in Hong Kong after participating in a similar concept in the USA. Initially the venue changed for each dinner, but as of six months ago, Test Kitchen has a beautiful, minimalist space in Sai Ying Pun. 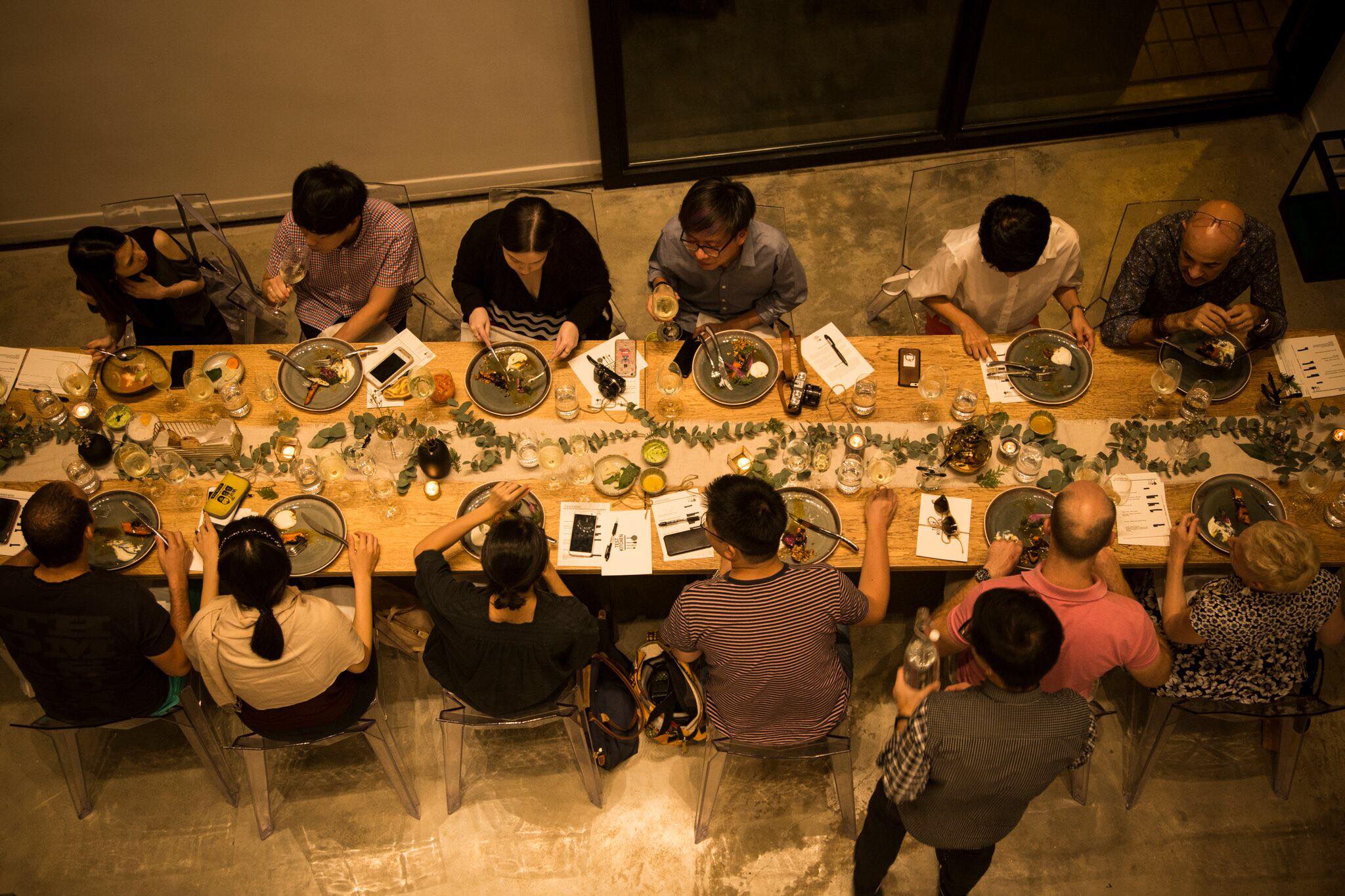 Vincent aims to host at least one dinner per month. The menu is often unlike anything currently on offer in Hong Kong. Previous chefs have included the duo of Toni Toivanen of Noma and Eric Räty of Café Gray Deluxe cooking new Nordic food, Carlos Garcia Rodriguez of The Black Pig Bar cooking Spanish-inspired food and Jordy Navarra formerly of The Fat Duck and Bo Innovation cooking Filipino food.

The most recent dinner was cooked by Israeli chef Gal Ben-Moshe, founder of GLASS in Berlin and whose experience includes a stint at three-Michelin-starred Alinea in Chicago. When we heard he would be serving up a ten-course tasting menu ($1,280 per person, including wine pairings) of modern interpretations of Eastern Arabic dishes, we didn’t know what to expect and couldn’t wait to try it out. By the time you read this review, the GLASS pop-up will be over, but we hope to give you an idea of what to expect at a Test Kitchen dinner.

Walking into the Test Kitchen space is like entering a friend’s dinner party. The large open kitchen means guests have full view of the action, watching the guest chef work his or her magic. Chef Ben-Moshe was very friendly, chatting with guests and introducing his dishes. His wife was our sommelier for the evening and regaled us with personal anecdotes of why they chose the wines – which was his favourite, which was hers and so on. The lively interaction with chefs and other diners made it an evening to remember.

We started with an arak-based cocktail. The liquor is anise flavoured, which went well with the
grapefruit juice and basil. We were told arak is often drunk by teenage underagers in Israel, providing a delightfully unexpected feeling of nostalgia for our younger days.

The chicken skin and pretzel roll starter paid homages to both the chef’s Israeli heritage and his wife’s German heritage. Served with an olive oil and cocoa butter emulsion, the deliciously salty, chewy roll whet our appetites. The chicken skin was crisp yet managed to retain a good bite. We’d had falafel before but not like this. Soft, devoid of crust and topped with a piece of raw sardine – it was delicious and very fragrant.

The ‘forest in a glass’ had an assortment of mushrooms and came with smoke, though we couldn’t detect any smokiness in the dish itself. 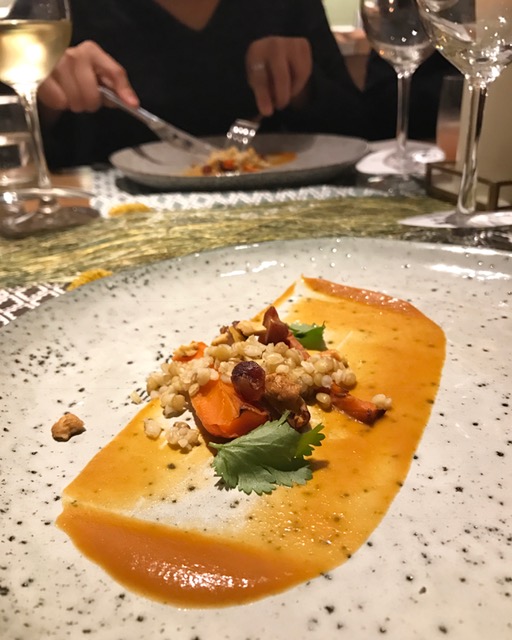 Salt-baked carrots are a treat, and ours were served on top of a caramel-y carrot purée, with soft dates, cashews and Israeli couscous. Soft, crunchy, sweet, salty all in one dish.

Once we’d taken a few spoonfuls of the cauliflower soup, gasps of satisfaction could be heard around our table. This was an incredibly thick soup with an amazing slow-roasted cauliflower aroma saturating every spoonful. 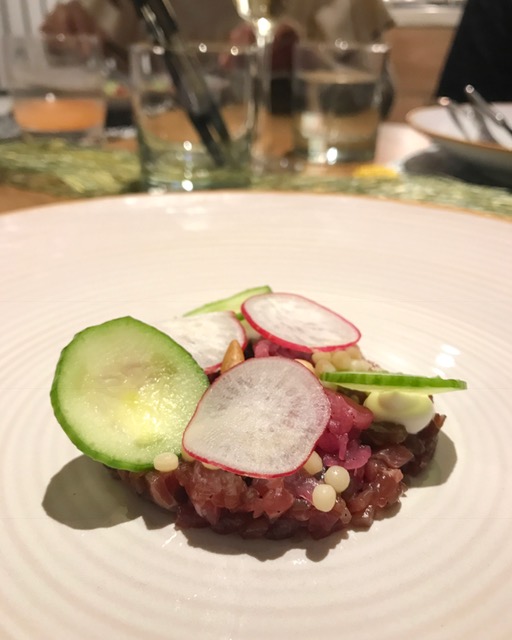 We enjoyed the chef’s take on tartare, using mutton instead of the more common beef. The mutton flavour wasn’t overpowering but fresh and earthy. The yoghurt, pickled red onion and pine nuts added additional flavour and texture.

The chicken breast was very tender, and we enjoyed the accompanying chickpea purée, chickpea puffs and pickled figs. 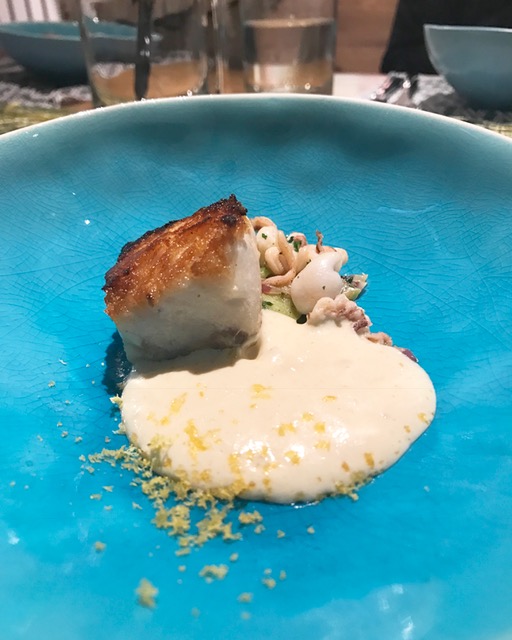 For the grouper, Vincent took the cooking team to a market to purchase a Hong Kong version as well as some squid. The top layer of the fish was fried crisp while the flesh was lovely and fatty. We really enjoyed the hints of citrus in this dish, as well as the foamy tahini sauce and melt-in-your-mouth fava beans. 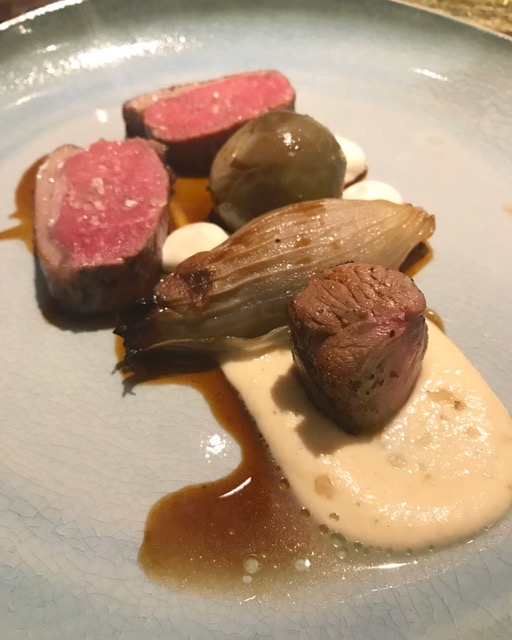 You haven’t had lamb (saddle, in this case) until you’d tried it with a rose water, cumin and pomegranate sauce. This stunning rendition was based on a recipe from the 13th century. We’re thankful we had the opportunity to experience it. 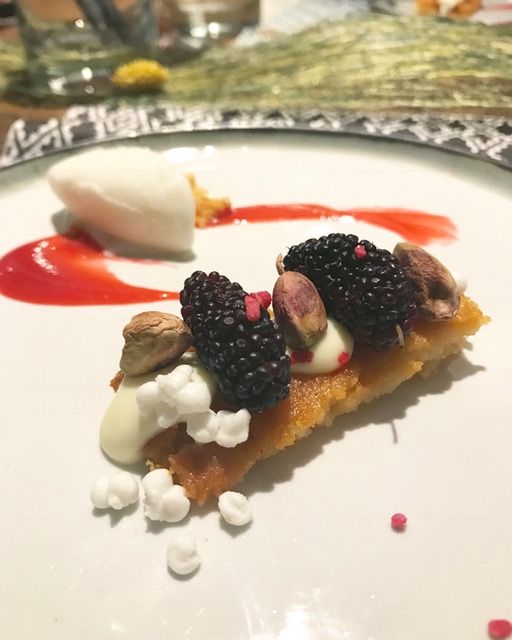 The Beirut Nights dessert was a slice of moist semolina and coconut cake, served with orchid root ice cream (sticky!), rose crystals, mulberries and pistachios. Given the richness of the previous courses, it was nice to end with a dish that spoke to our other taste buds – the ones that always have room for dessert.

Our evening at Test Kitchen was one of the most enjoyable dining experiences we’ve had in Hong Kong. Chef Ben-Moshe is definitely one to watch. There’s nothing like experiencing new foods, spices and flavour combinations for the first time. Nothing about the evening was pretentious; it just felt like food lovers coming together to enjoy creative dishes cooked by other food lovers.

Sign up for Test Kitchen’s email list if you’re interested in joining an upcoming dinner (we hear small-town Icelandic and molecular Indian cuisine may be showcased soon). Remember to request a seat at the table closest to the open kitchen for the best view in the house.