The Best Sandwiches in Hong Kong

With so many good carbs in town, which sarnie should you choose? 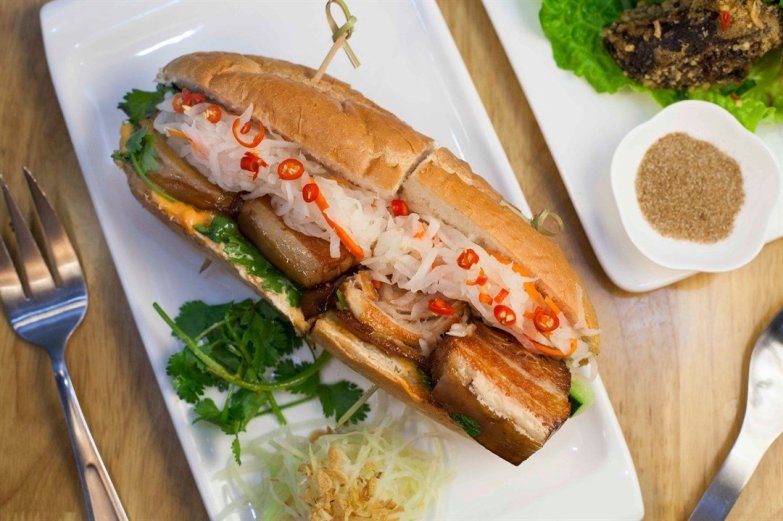 Photo credit: Too Full For Food

Bahn Mi Bakery in Kowloon City is well worth the MTR ride, boasting a whopping 19 banh mi varieties, some playing on the safe side and some a lot more outlandish. We’re looking at sandwiches like the confit duck leg ($128) and the flavour-bomb combination of portobello mushroom with blue cheese ($88), and then there’s the improbable beef stew in tomato sauce ($92) and the Japanese-inspired fish katsu ($82) in yoghurt sauce with pickled red onion. One thing’s for certain: their seemingly endless menu is going to leave your decision-making skills torn asunder. 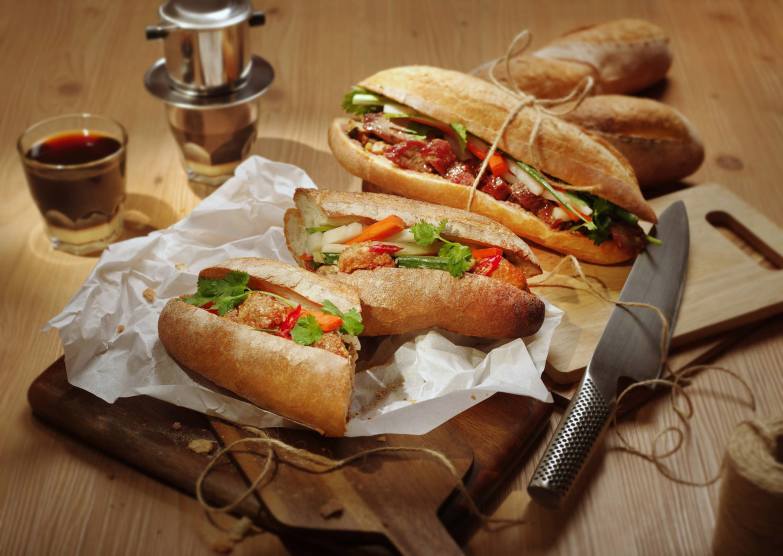 Yes, carb lovers, there are are several delicious options out there for our favourite Vietnamese sandwich. Central’s Bánh Mì Kitchen churns out a mouth-watering classic cold-cut banh mi ($48) that scored the runner-up spot in our Banh Mi Brawl last year. Freshly baked in-house, Bánh Mì Kitchen’s offering is generously packed with coriander, cucumber, spring onion and pickled veg, as well as optional fresh chilli, along with the four varieties of cold-cut fillings. The sandwich has a beautiful buttery flavour, a herby freshness and a well-balanced ratio of meat to veg to bread. They also have other non-traditional options such as charred char siu ($51) and lemongrass chic ($47). 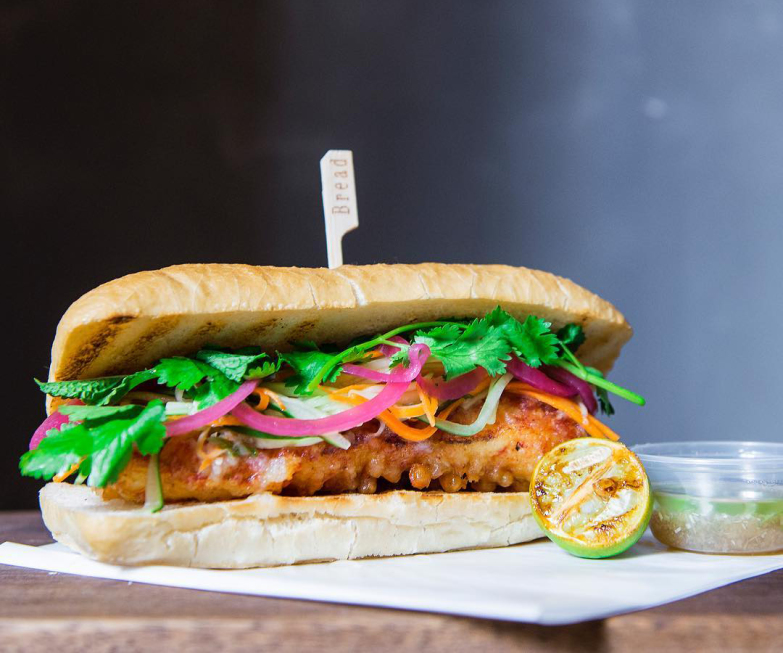 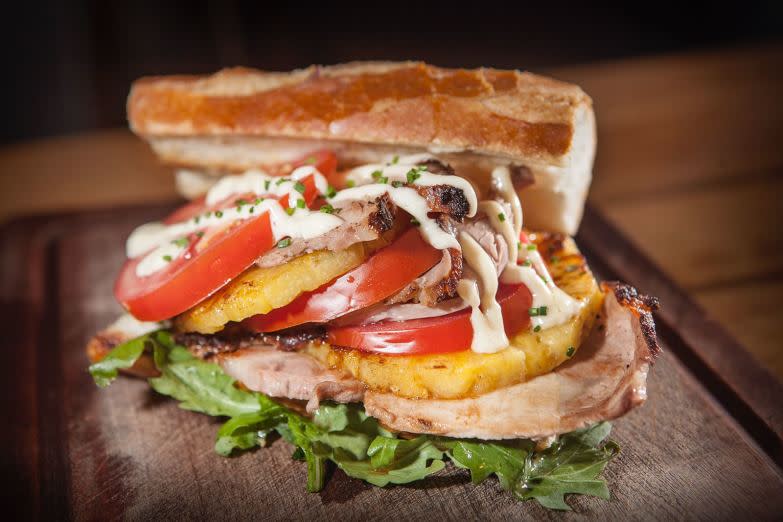 We recently made a visit to Sai Ying Pun’s Flying Pig Deli and tried their bestselling “UNCLE” roast pork sandwich ($78). We counted slices of grilled roast pork, pineapple, tomato, rocket and a slathering of creamy mayo – a fully loaded sandwich that struck a perfect balance between sweet and savoury, with the pineapple adding an unexpectedly sweet and zesty flavour. The chicken schnitzel sandwich ($78) was also a standout, made with homemade breaded chicken breast, rocket salad and fresh tomato salsa. 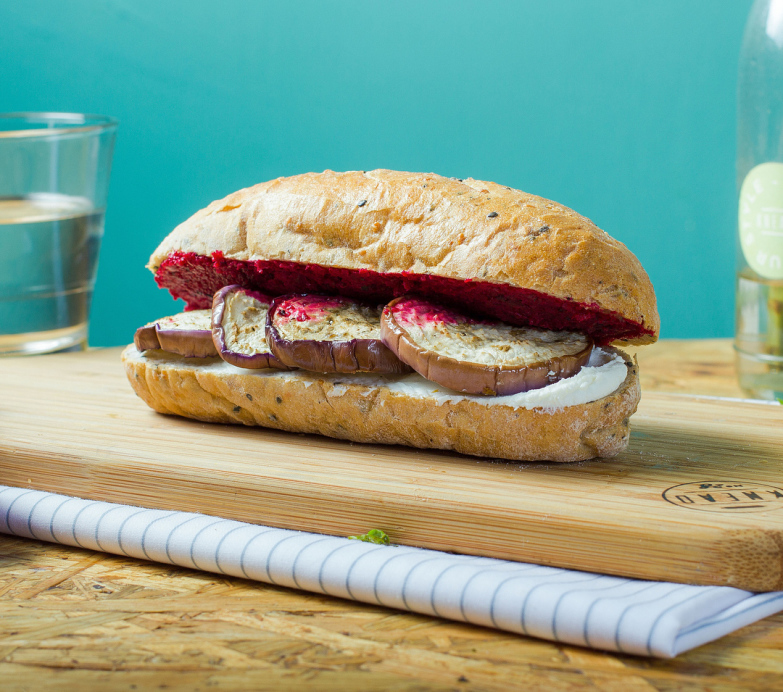 We love the “build-your-own” element to the sandwiches at Knead. An extensive menu of premium ingredients (read: lots of meats, fish, veggies, cheeses and the more unusual hummus and pesto), as well as different types of bread – from baguette and rye to quinoa and wholegrain – ensures oodles of fun when constructing your perfect bite, though Knead also has pre-built sandwiches for those in a hurry, like the ham-and-cheese toastie ($60), a toasted ciabatta of double Gouda, ham and ketchup, and the decadent salmon and goat’s cheese sandwich ($79), made with sun-dried tomatoes and baby spinach on a rustic rye roll. Is it lunchtime yet? 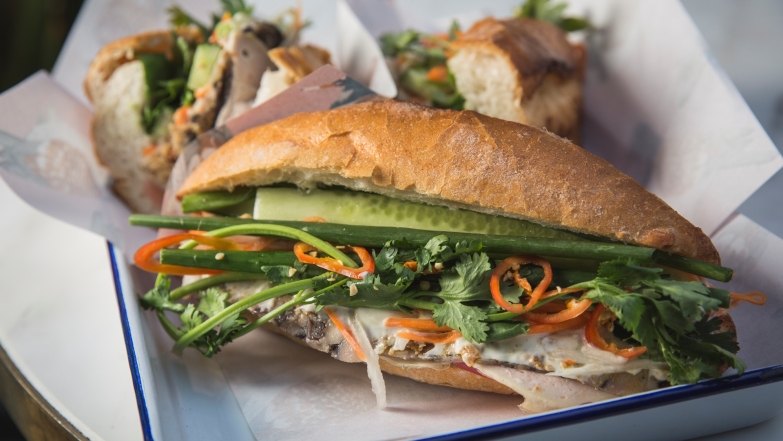 Le Garçon Saigon’s little brother next door does one thing and it does it damn well: banh mi. Le Petit Saigon’s traditional banh mi thit ($88) is as authentic as it comes, and this pretty (packed) package was crowned our favourite banh mi in town. Using a recipe passed down from the Vietnamese chef’s mama, you’ve got pork-belly slices, headcheese, sheets of pork tendon and pork floss, creamy chicken-liver pâté, homemade mayonnaise, pickled veg, cucumber and coriander, all amounting to just the right balance of flavours. Their bread is crunchy on the outside and soft on the inside – basically, an absolute dream. 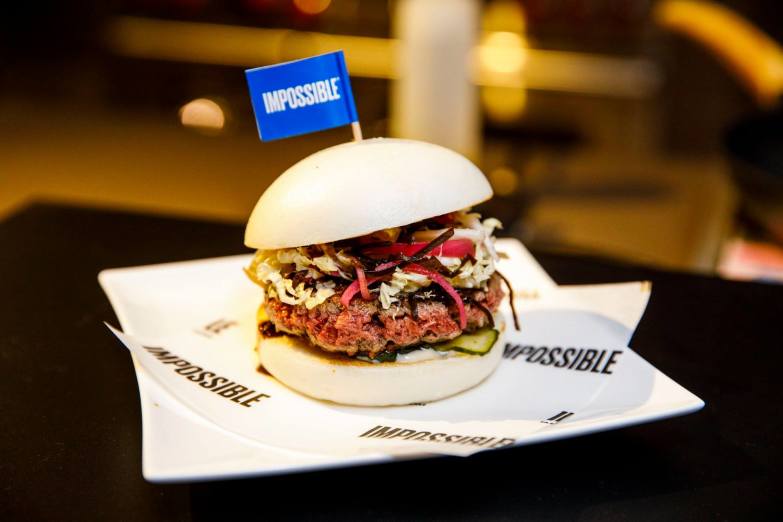 Purists may say that bao aren’t technically sandwiches, but any envelope of starch and carbs with filling is good enough for us. We are huge fans of their classic and slow-braised pork belly bao ($78), a pocket of deliciousness that’s succulent beyond belief, and the fiery fried chicken bao ($78), prepared with a Chinese black vinegar glaze and spicy Sichuan mayo. Plus, Little Bao is one of only a handful of restaurants in Hong Kong currently serving up Impossible Foods’ faux-meat patty in their Impossible Bao ($118), along with black-pepper teriyaki sauce, salted-lemon kombu salad and fermented-tofu sauce. 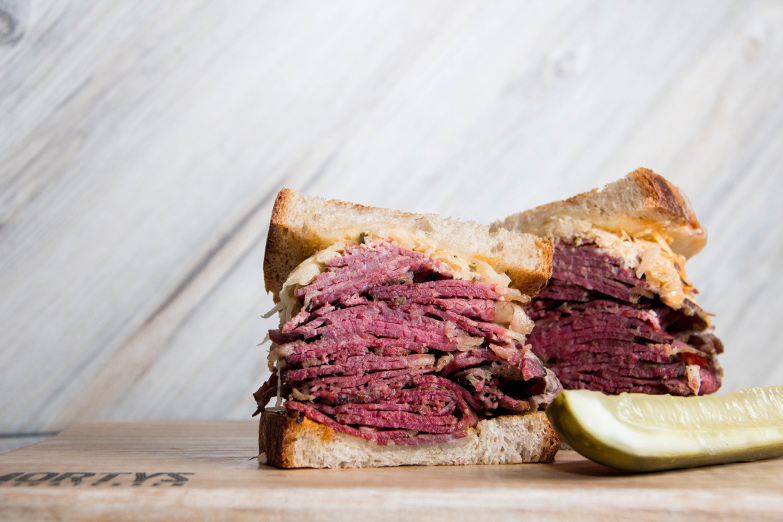 Morty’s brings a slice of New York to our shores, and boy, they’re generous, American-sized slices. Hands down, our favourites are the legendary Reuben ($128) – a tower of slow-smoked pastrami, Swiss cheese, creamy Thousand Island dressing and sauerkraut on house rye – and the classic pastrami ($118), which has added yellow mustard. Looking for something a bit different from these sandwich experts? From smoked truffle chicken ($105) to grilled cheese ($85), made with mixed sharp yellow and mild orange Cheddar cheeses, this is a sandwich lover’s heaven. Heads up: Tuesday is Morty’s buy-one-get-one-free day, exclusively for their pastrami and Reuben sandwiches. Starts at 4pm and dine in only! 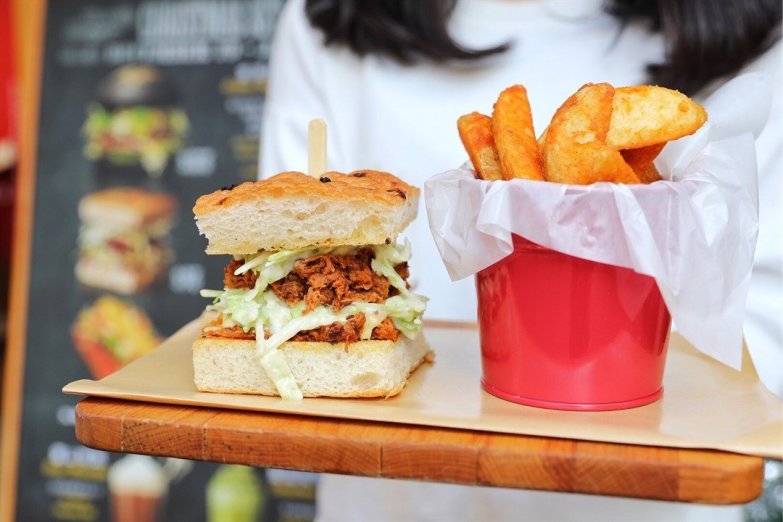 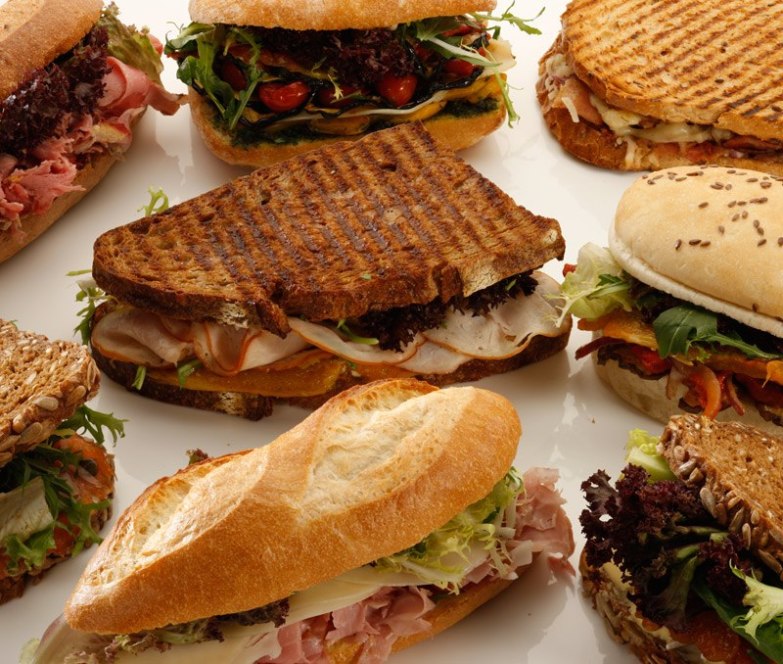 One of the best bits about a sandwich is the bread, and Passion does extraordinary bread. From traditional selections like French ham and cheese ($49) to something a little more crazy like the chicken tikka sandwich ($49), Passion’s long list of sandwiches and fresh daily selections keep us carb fans coming back for more. The staff are highly attentive, and the café oozes a vibe so chill that you’ll want to spend your entire afternoon there plotting your next holiday to Paris. 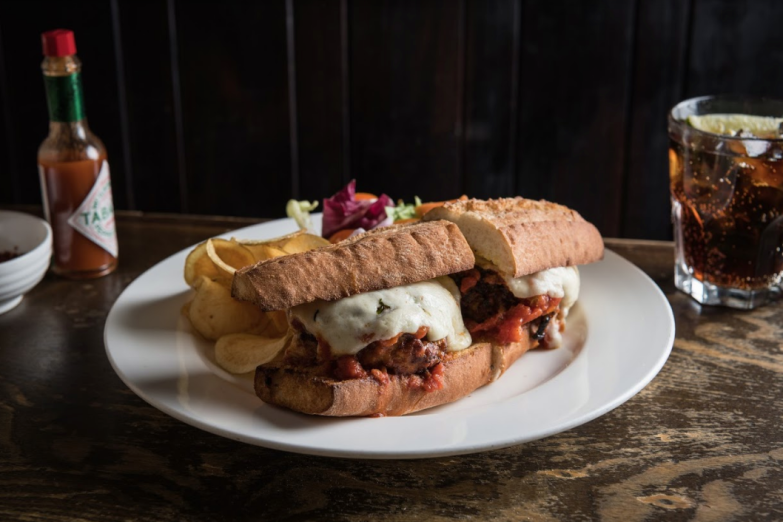 No one does a gooey, cheese-covered veal meatball parm ($178) like Posto Pubblico. We may well pose the question of whether a humble sandwich should demand such a high price point, but knowing what we know about the consistently superior meatballs that Chef Vinny Lauria and his team churn out, we feel that we can swallow it and splurge on special occasions. 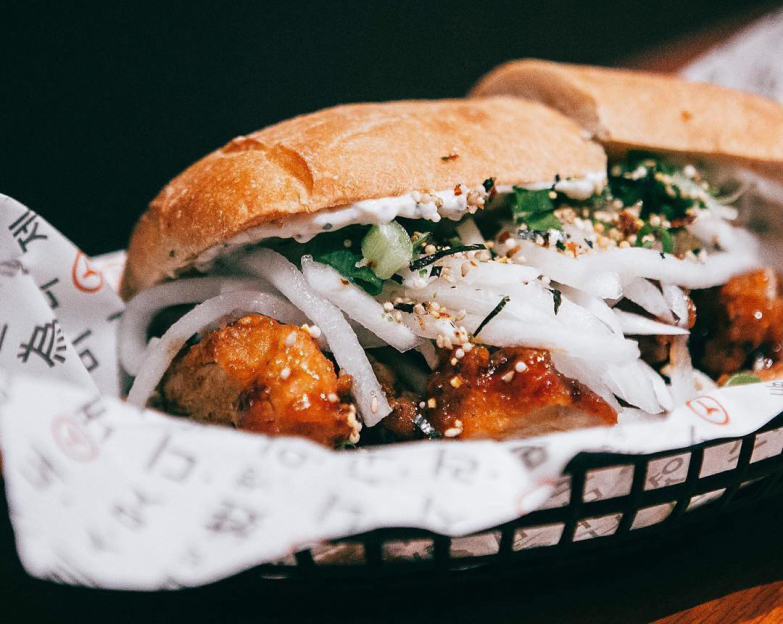 Cheap, fast and cheerful – not many restaurants can boast all three, but Seoul Bros does it effortlessly. Some may be perplexed by the non-traditional fusion take on Korean fast food served here, but we love their grub all the same, especially their banh mi ($48), a toasted ciabatta filled with your choice of meat, pickled daikon, kimchi, spring onion, sesame seeds and a piquant sauce. We like the beef and shrimp varieties the best. 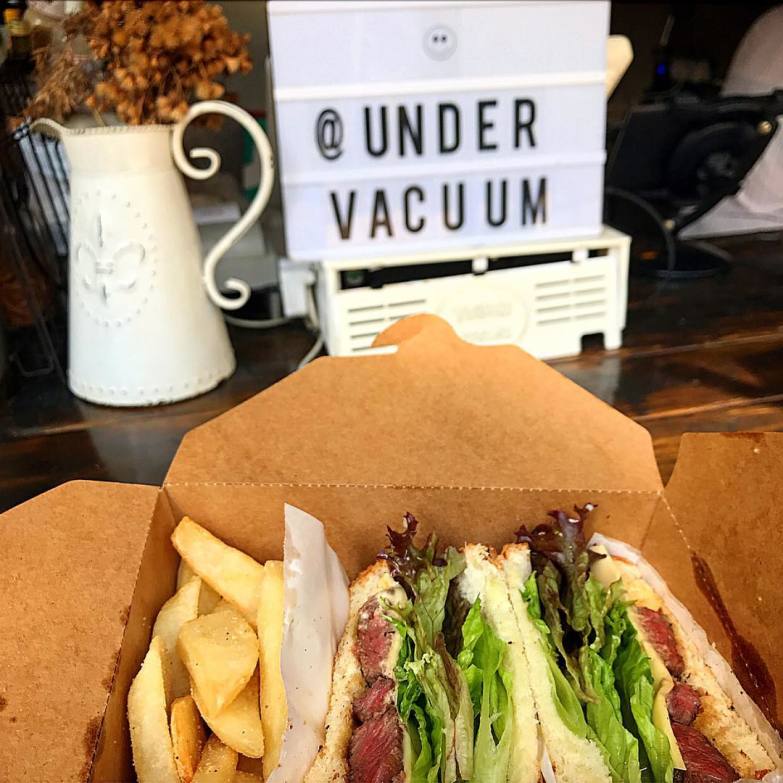 Take note, those labouring under the Food Truck Pilot Scheme: this place is doing stationary kiosk food the right way. If you’re able to locate Under Vacuum’s little booth in what the government likes to call a “garden” – we would call it a public square at best – you’ll be rewarded with juicy, easy-on-the-wallet sous-vide steak sandwiches ($48). The radish fries ($16), served with a sweet and spicy Thai chilli sauce for dipping, are also a must-try. Under Vacuum Deli only has a few seats available, so take your order to go and enjoy it in the park. 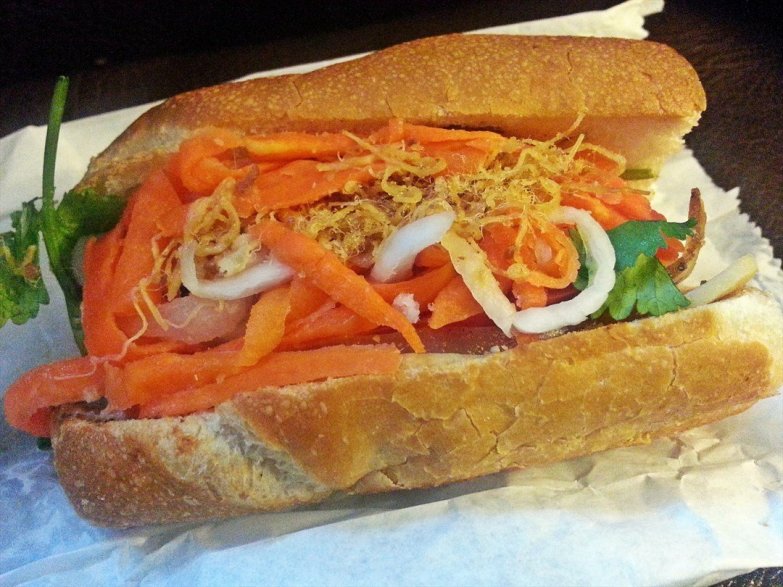 There’s absolutely nothing fancy about the look of this place from the outside, but within its little kitchen, Vuong’s churns out Vietnamese-style sandwiches at an incredibly affordable price point. Sandwiches here come in three sizes – big, small and mini – and their signature Vietnamese-French sandwich ($75) has a long laundry list of fillings: pâté, Vietnamese pork roll, roasted ground pork, smoky pork, pork floss, tomato, cucumber, pickled carrot and coriander. Feeling hungry? You might want to bring a friend to share a big sandwich; it’s quite a supersized beast. The photo above shows you what a “mini” sarnie looks like!

A new branch of The Pizza Project in Wanchai, a cocktail bar in Central for rum lovers and more exciting openi ... READ MORE