When there’s 16 dishes to be had, which one rules them all?

It seems like everyone and their mothers are offering up brunch menus now. How does one distinguish from the forgettable, mediocre brunches that make you wish you had just stayed at home and, instead, focus on the good sh*t that makes getting out of bed worthwhile?

Look for Spanish red prawns on the menu.

Now, that may not be a sure-fire way to smell out a winner, but it seems to be working for Club Albergue 1601. Their new brunch menu, served on weekends and public holidays from 12–3pm, centres around this crustacean theme, featuring 12 tapas, three main courses and a dessert platter.

Not having heard much about this fairly new restaurant, or of its Macanese sibling, we didn’t quite know what to expect. Certainly, we had high hopes for a good meal, though – foolishly – we didn’t expect anything would blow our minds. How wrong of us to assume... 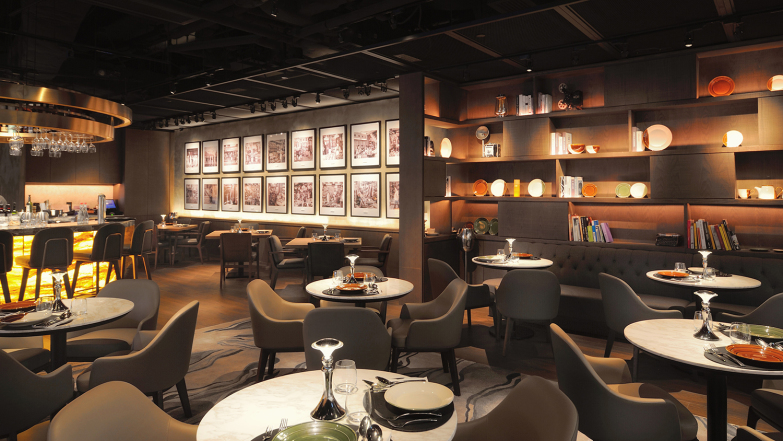 We were taken aback as soon as we stepped inside the restaurant. Located at Food Forum in Times Square, in the prime real-estate spot left behind by The Fat Pig, Club Albergue 1601 is split into several areas, each exuding an understated sophistication of its own. A coffee bar at the front of the restaurant, replete with plush armchairs, invites casual diners in for a relaxed bite and drink (and possibly refuge from the wild shopping spree going on downstairs), while there’s a moodily lit area deep inside the restaurant that’s well designed for more intimate gatherings. And let’s not forget that stunning outdoor terrace. 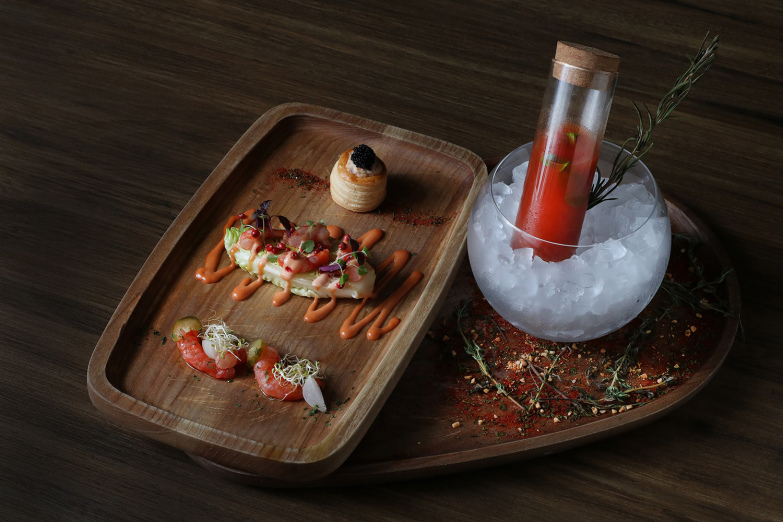 Things started off with a bang: a trio of appetisers – and a scientific-looking Bloody Mary. We were duly impressed with the ceviche – served with pickled pearl onion, cucumber and a tangy lime soy sauce that contrasted well with the sweetness of the red prawns – and the baby gem lettuce salad, which, aside from its whimsical, photo-ready plating, hit all the right notes in the flavour department. Lightly steamed, soft red prawns and a bed of fresh, crunchy lettuce provided a pleasing textural experience, and the drizzled Thousand Island dressing was rich, creamy and sweet. It’s been awhile since we enjoyed a simple salad this much. The flaky and light crabmeat and black-roe puff pastry was also well executed.

We were, however, let down by the Bloody Mary. Though we can’t fault its eccentric presentation, it was mixed much too heavy-handedly, the spiciness overpowering any other flavour it might once have had. The Spanish mini red prawns added a delightful texture, but they had to be consumed as if downing a shot; the risk of accidental, inelegant choking in front of your date lingers on the horizon. 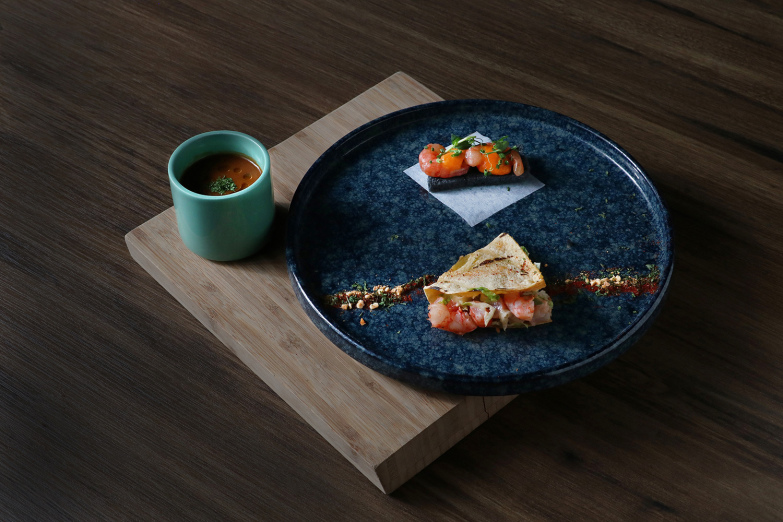 So far, so good, and we were really digging the trio platings. After the failed Bloody Mary, it was lovely to have the well-balanced and savoury red prawn bisque to mask and flush the taste. For a rich flavour and vivid colour, Spanish mini red prawns were first baked, then sautéed with brandy, onion, celery, carrot, black pepper and tomato paste. Thus vindicated, we enthusiastically moved on to the red prawn taco, a bite-sized masterpiece of a well-spiced taco that held a firm crunch despite a saturated filling of mini prawns, shredded lettuce, red onion, chilli sauce and mayonnaise. The raw red prawn with uni on baguette toast was equally satisfying, a smattering of red prawns marinated in yuzu vinegar atop pillows of uni and squid-ink baguette. 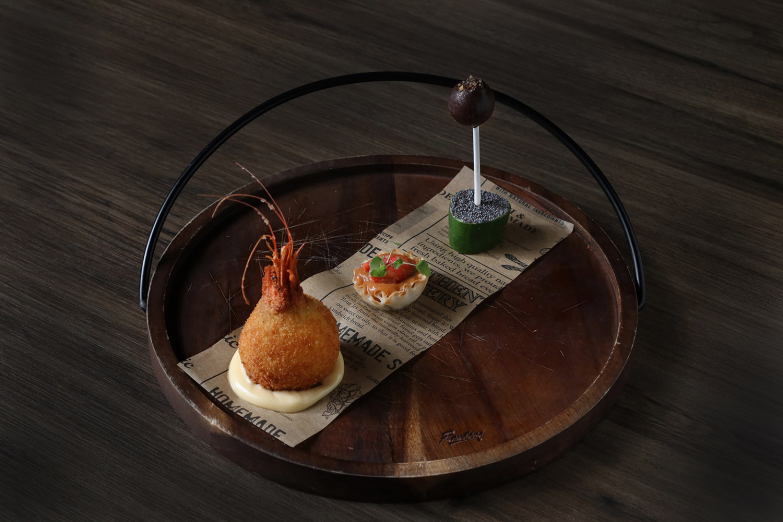 The presentation of the red prawn croquette was at once morbidly adorable and something a little too reminiscent of Alien; a deep-fried sphere of mashed potato and prawn head, amalgamated so skilfully, we couldn’t tell where the prawn started and the potato ended. Once we got past that, the crunchy croquette and savoury red prawn proved to be a match made in flavour heaven, with Japanese mayonnaise adding a sweet kick to finish. The sautéed red prawn filo tart looked good on paper, and on the plate, but its complicated preparation process didn’t take into consideration the heat and humidity that we’re currently suffering. By the time the tart had reached our table, the crust had lost some of its crispness, though what it had lost in texture, the aromatic red prawns and spiced laksa sauce redeemed in flavour. The foie gras and chocolate lolly, while ambitious, missed the mark by a mile. The idea sounded good in our heads – what could go wrong with mixing decadent Belgian chocolate and rich foie gras? – but the resulting flavours were a bit too muddled, a bit too fatty, just a bit too wrong. 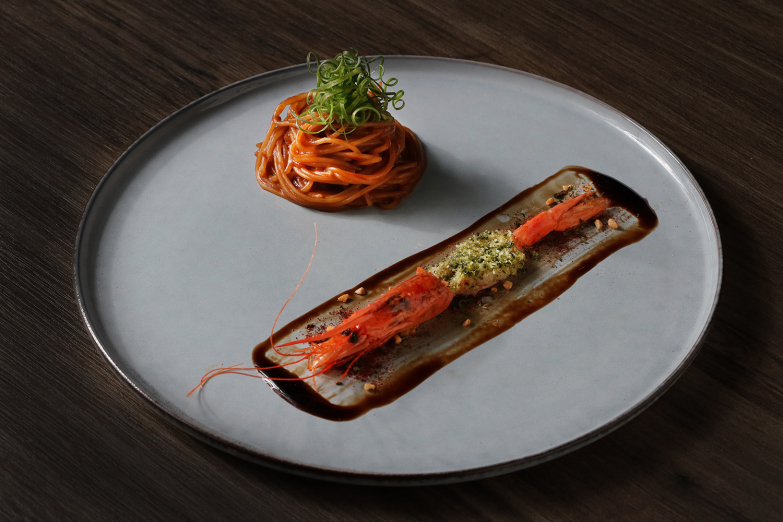 As we came to the end of the red-prawn-themed courses, we reflected back on the creativity of the dishes served thus far, appreciating just how the chefs at Club Albergue 1601 have gone to great lengths to showcase the diverse flavours of this one humble ingredient. To finish, the kitchen rolled out a basil-crusted red prawn, with a filling of battered prawn meat roasted in basil, breadcrumbs and salt, and a twirl of spaghetti, cooked in a briny red prawn stock. 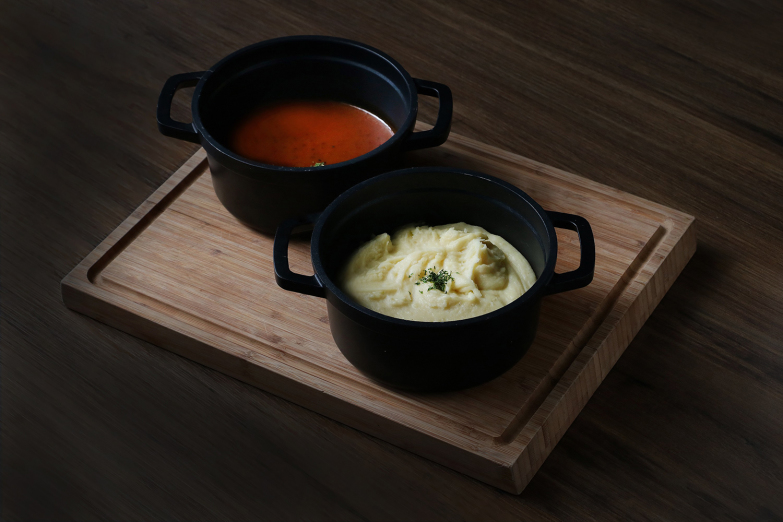 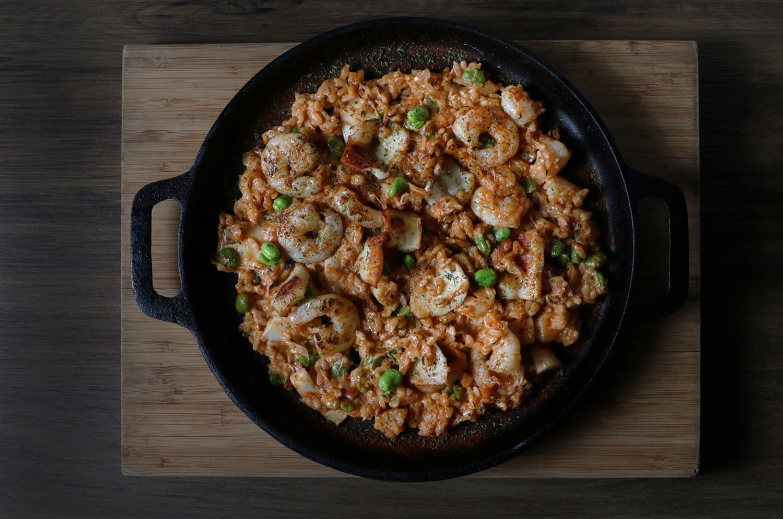 But we weren’t done yet. Velvety mashed potato, seasoned liberally with black pepper, followed. Mash as buttery and silky as this is a rare thing indeed, to be welcomed with open arms and open mouths. We smelled the seafood risotto long before we laid our eyes on it – a fragrant platter of creamy, savoury, cheese-riddled rice and juicy seafood, with a citrusy note to cut through the richness. Prepared on rotation during the brunch period and delivered to your table, all three mains come with an all-you-can-eat caveat and endless refill possibilities. 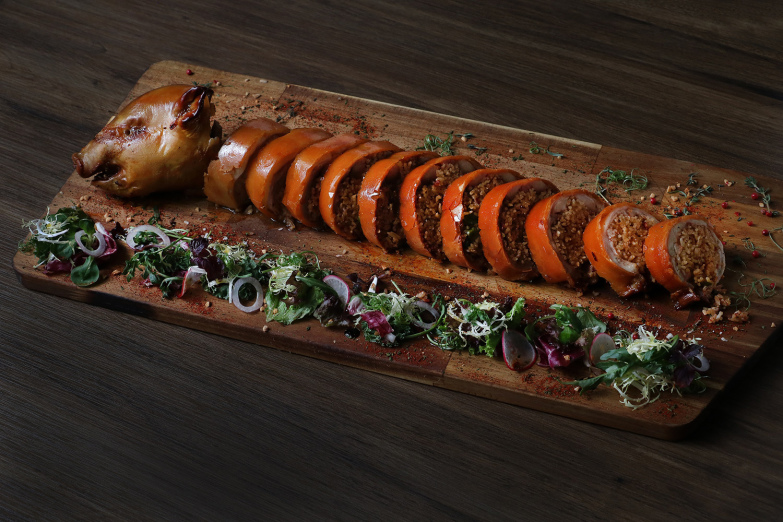 The crown jewel of the main courses was, undoubtedly, the roasted suckling pig. You know, we don’t ask for much; we’re not entitled eaters who can’t appreciate the small, simple things, and we’re perfectly happy with a juicy, crisp roasted pig, but the chefs at Club Albergue 1601 aren’t satisfied with being ordinary. It’s above and beyond or nothing at all, and the result is a suckling pig stuffed with rice, onion, fava beans and smoked paprika. Slow-roasted for an hour, the tantalising aroma was enough to make me cry. The flavourful pairing of crispy pork skin, tender pork meat and rice – amazing. 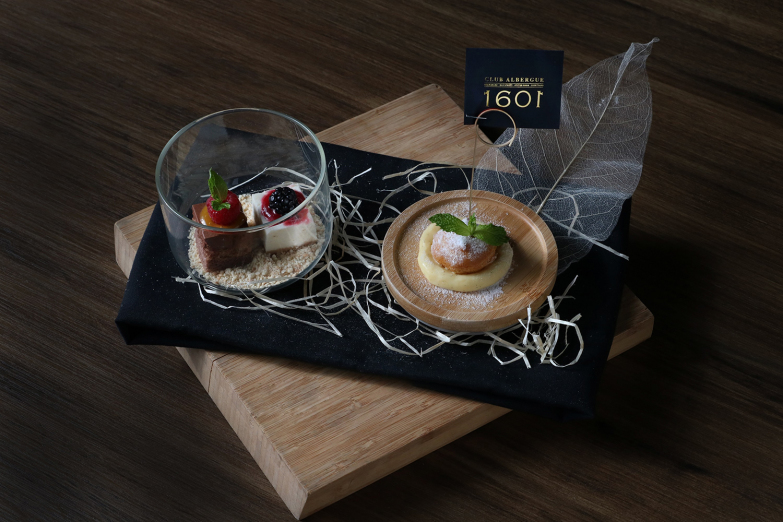 All good things come in threes, and good things come to those who wait. The triple threat of dessert made us weak in the knees. Luckily, we were comfortably perched and nibbled our way through velvety chocolate mousse and rich, dense cheesecake, before finally ending with a light, creamy custard puff. We only wished that they had come in larger portions to fully satisfy our sweet tooths.

And the price of this culinary achievement? A mere $388 per person for a 16-dish brunch, of which the three main courses are free flow, should you have an especially big appetite. We’re impressed by the value for money, creativity, quality and sophistication of the food served and the well-mannered, attentive staff. We will most definitely be back – though we might opt out on the Bloody Marys – and, next time, we’ll bring friends.