You know it's going to be a good tasting when you walk in and the restaurant is decked out in a Godzilla theme. Founded by "Ramen King" Shigemi Kawahara, this joint has been a long-time reliable favourite on our list, and its six different locations in Hong Kong mean that we can get it anytime, all the time. For their 5th anniversary, Ippudo is going all out and teaming up with the iconic Japanese monster for a series of celebrations this year, including rolling out a new limited-edition Ebi Ton Ramen ($88), inspired by the 1966 classic Godzilla film Ebirah, Horror of the Deep. In addition to the special anniversary dish, Ippudo is also refreshing their offerings across the city and introducing different menus and exclusive ramen for each outlet in Hong Kong. If you're a ramen lover, this is a fantastic opportunity to hit up all Ippudo restaurants to try their new exclusive dishes. 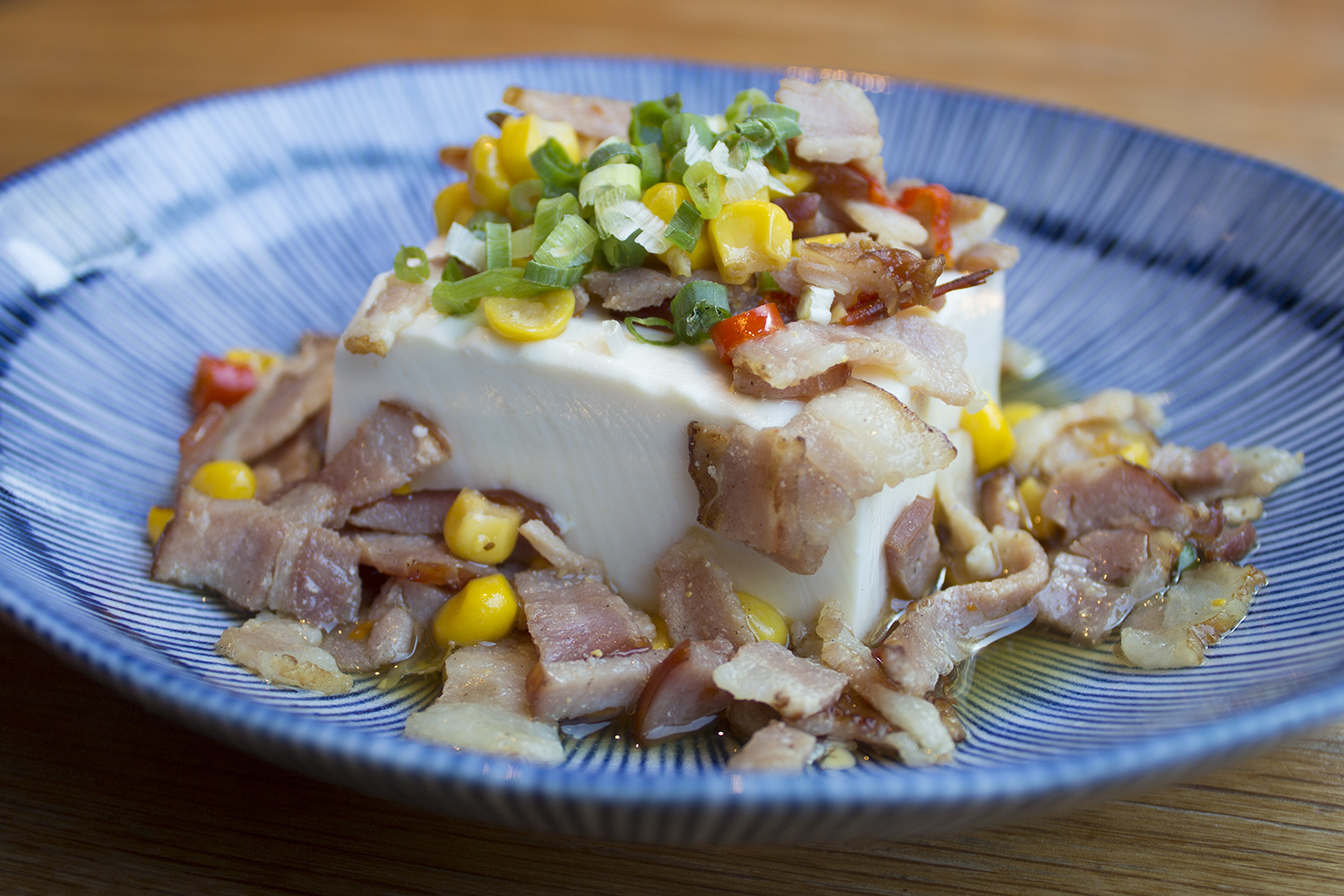 Our tasting started us off with "Bacorn" ($28), a bacon and tofu combination, drizzled in a spicy house sauce. We appreciated the interesting concept of the dish and Ippudo's attempt to wrangle the challenge of uniting seemingly all the flavours on our tastebuds, from the mildly sweet tofu, to the salty bacon, and hot sauce, but the end result fell a little flat and we agreed that the dish was too overwhelming and confusing. My tasting partner Steph added, "It won’t be on my must-eat list." 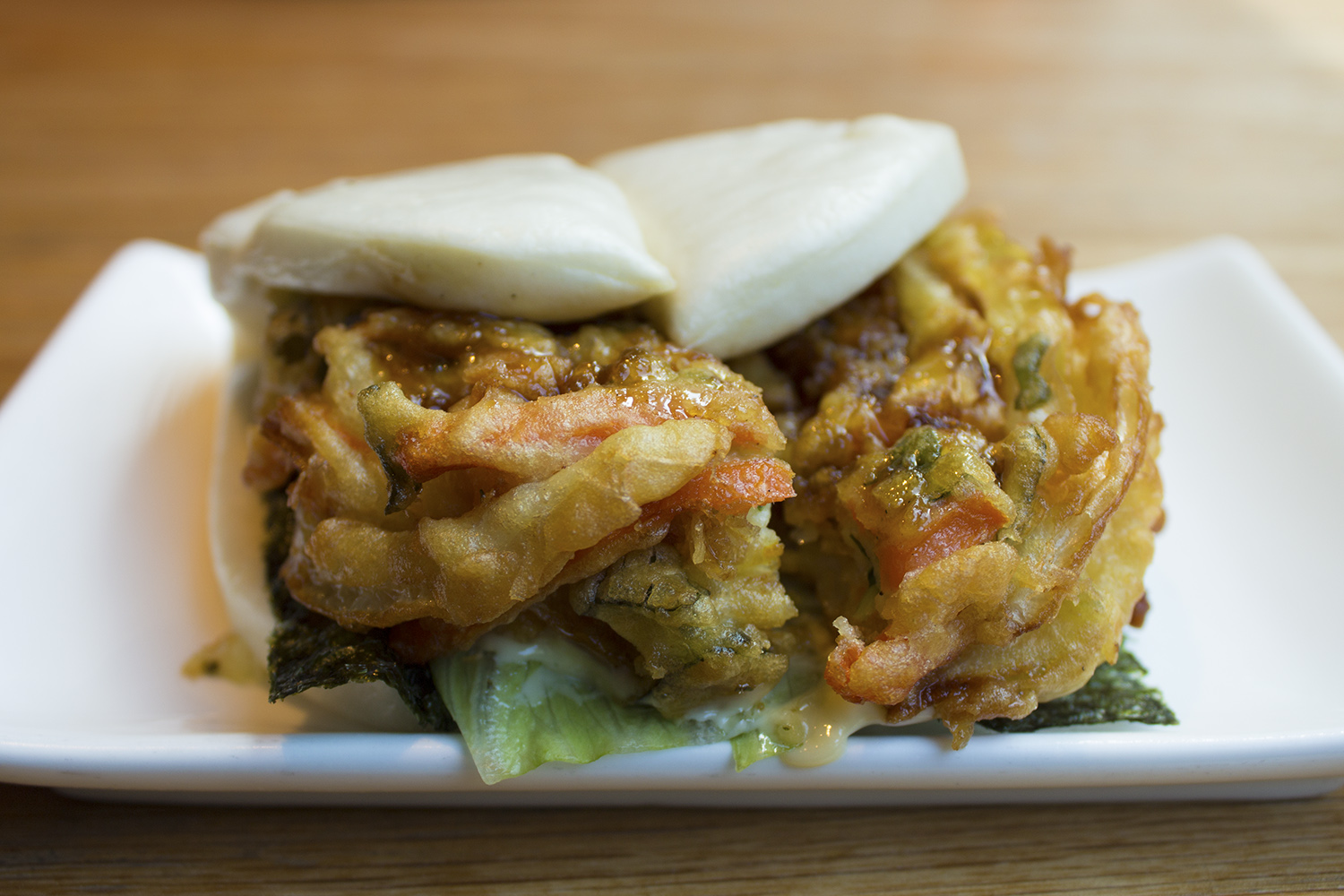 The Kaiage bun ($28) was an instant hit, in taste, texture, and execution. Decidedly the best dish of the tasting, the steamed bun was unbelievably pillowy and soft without being overly doughy, and the tempura was crispy, but not too oily or greasy, despite the deep-frying. We had a bit of fun attempting to decipher exactly what type of tempura we were sampling, as it bore rich flavours of soft shell crab and meaty chicken, although being listed as a "vegetable tempura". I loved it either way, and so did Steph, who said, "If I had to use one word to describe my experience eating this bun, it will be foodgasm. This bun will be the first thing I am ordering when I visit Ippudo again." There you have it; this one's gold, guys. You have to try it. 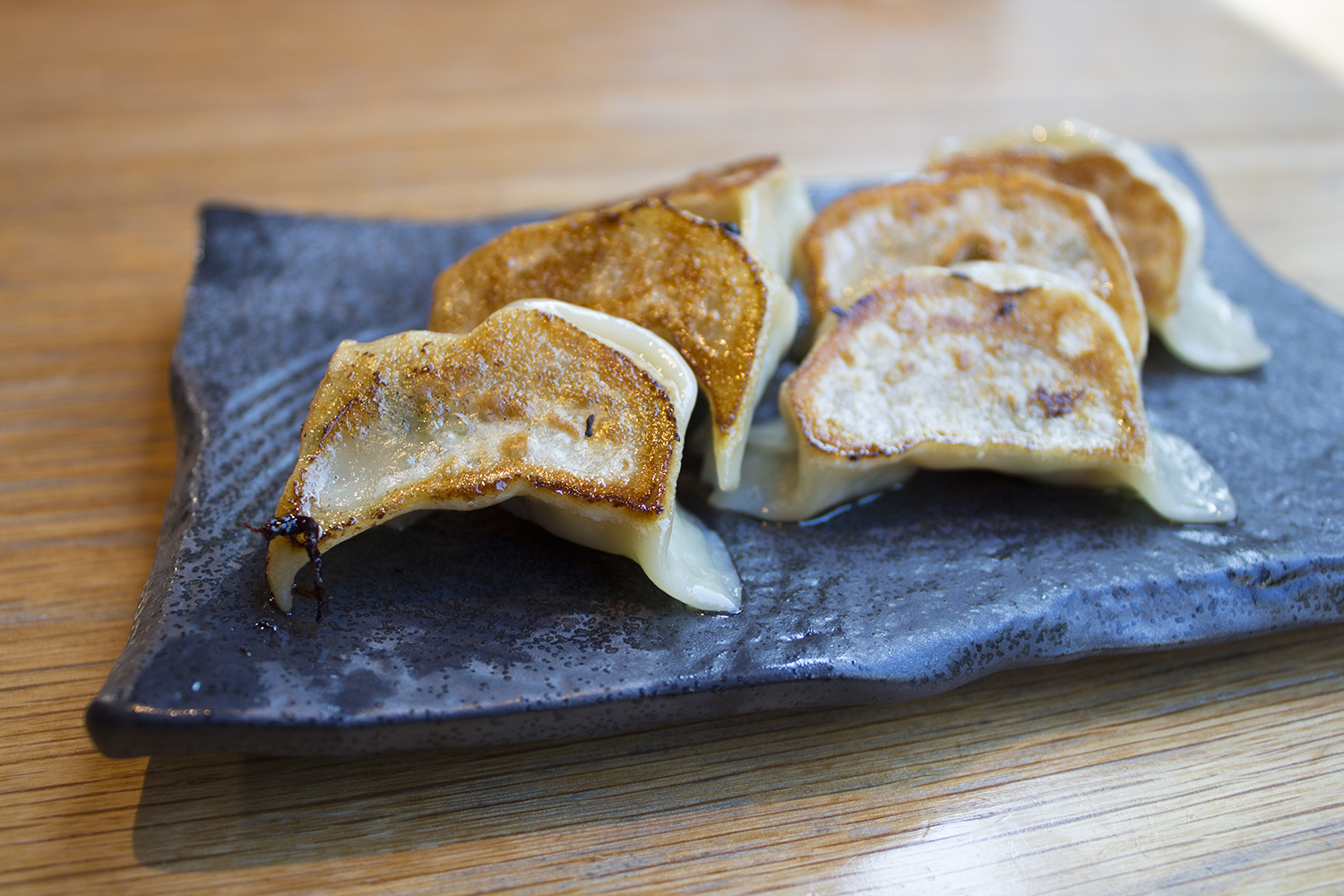 Joining in on the summer truffle trend, Ippudo's Hakata-style gyozas ($48) were served in perfect bite-sized portions with a dipping sauce of truffle. Our overall impression was favourable; the gyozas were well developed and prepared, with an ideal ratio of dumpling skin to filling (very important in our books; we don't fancy thick dumpling skins that you have to gnaw through to get to the good stuff). Steph adds, "The truffle sauce was not too overwhelming, hence it complemented the gyoza perfectly." Add this dish to your order when you try out the new Ippudo menu; it's a solid version of a universal favourite. 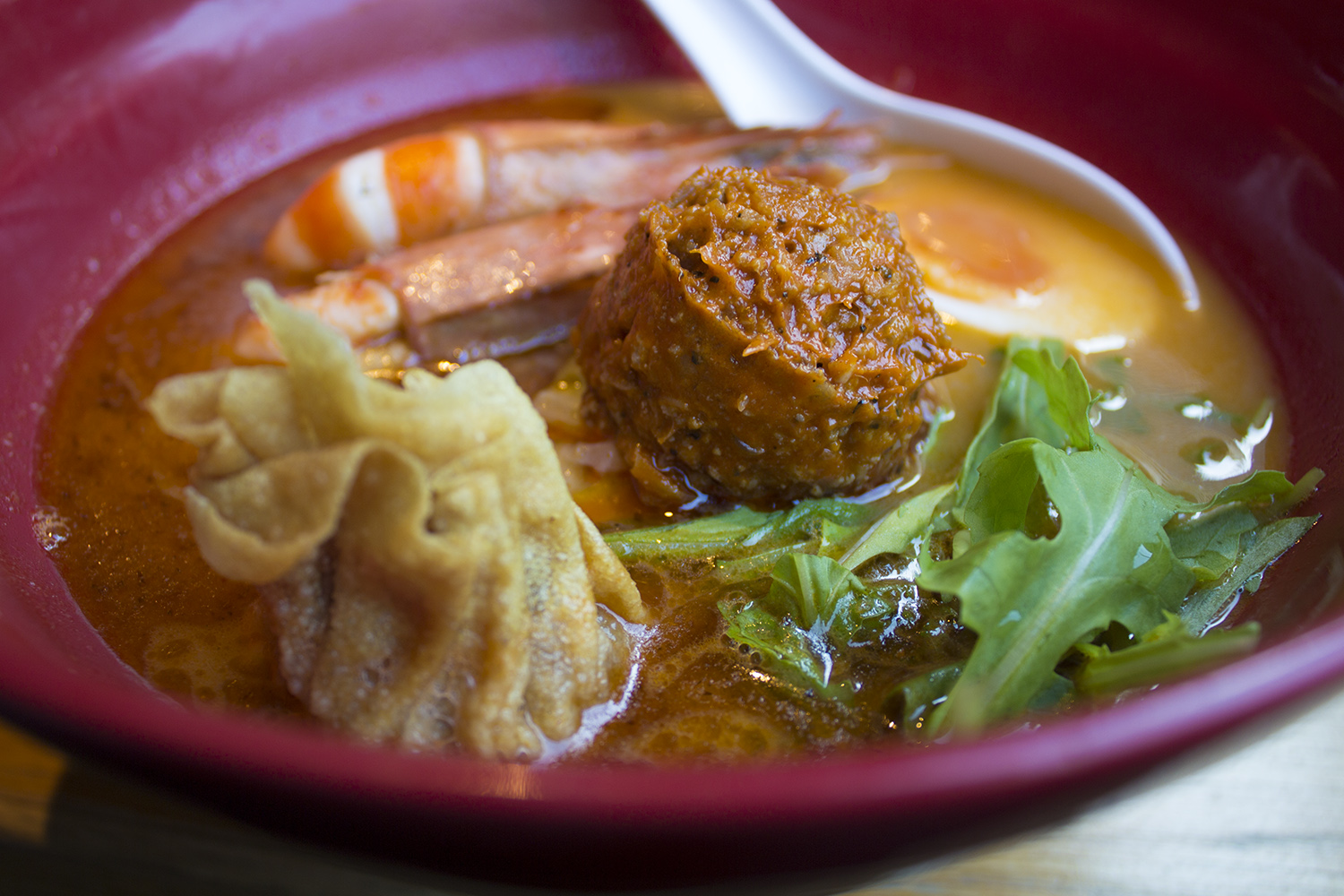 Not going to lie, I was a little skeptical when I first saw Ippudo's anniversary Ebi-ton ramen ($88). Having never tried a seafood ramen before, I didn't know what to expect, especially since Ippudo's usual offerings specialise in Tonkotsu and shoyu broths. Influenced by the Ebirah monster from 1966's Godzilla film, this new concoction is as shrimp-rich as it will get: two king-sized prawns, a dollop of shrimp paste and shrimp XO, with a drizzle of fragrant shrimp oil, all on top of a bed of specially-made shrimp roe noodles not served in any other Ippudo shops. Were you counting how many times I listed "shrimp"?

Luckily, my apprehension was soothed with the first bite, and despite the misleading colouring of the broth, the soup did not carry a hint of spiciness with it. In Steph's words: "The ramen not only looked and smelled really good, it tasted amazing. The soup was thick and flavourful, but it wasn’t too salty. I quite like the texture of the noodles. It was chewy and soft at the same time."

The prawns were crisp and succulent, and the shrimp wonton and onsen egg were delightfully moreish. Grated cheese was served with the ramen, and we sprinkled some over our noodles, but didn't care much for flavours it added. Taking into account how filling the dish was and how much we'd already eaten, we were struggling to finish our bowls. 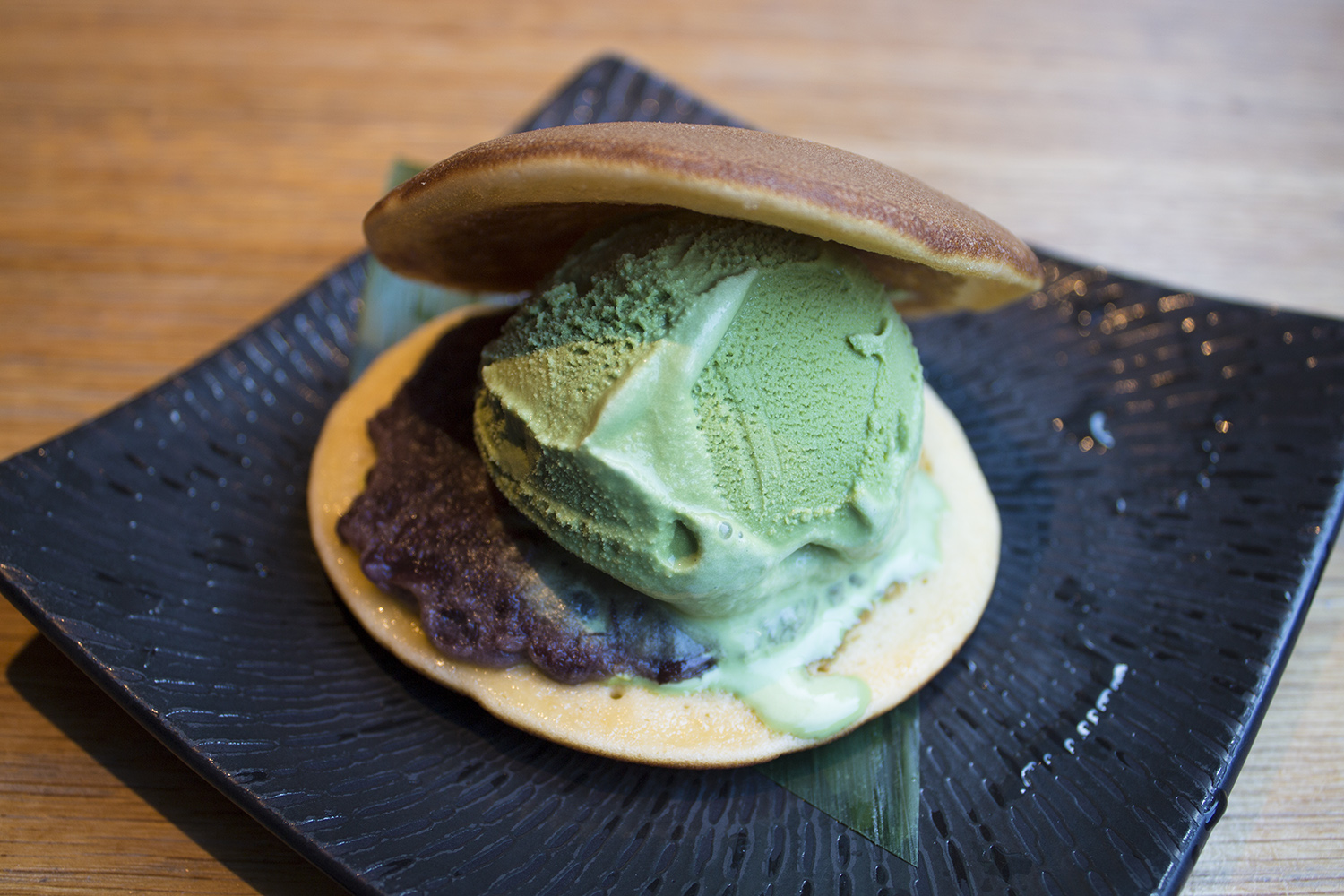 Little did we know there was dessert in the form of an ice-cream doriyaki ($28). But we have space in our second stomachs reserved for that, especially when matcha is involved. Arguably one of the best matcha ice-creams we have tasted thus far, it was rich and sweet. The doriyaki followed in the footsteps of the Kaiage bun in being soft and airy, and overall a wonderful accompaniment to the matcha and red bean paste.

Despite the obvious miss of our first starter, everything else that followed was a hit. We only sampled a few of many dishes from the new menu, but it's clear to us that the brains behind Ippudo have put some serious time and work into developing these offerings to celebrate their 5th anniversary. We give it two thumbs up. With the introduction of their outlet-exclusive ramen dishes, it's certain that we will have to revisit Ippudo again, and again, and again. The celebratory and limited-time Ebi-ton ramen is available in all Hong Kong restaurants starting 27th July, so it's high time to start making plans with your friends and family to try it out. And definitely order the Kaiage bun to go with it. 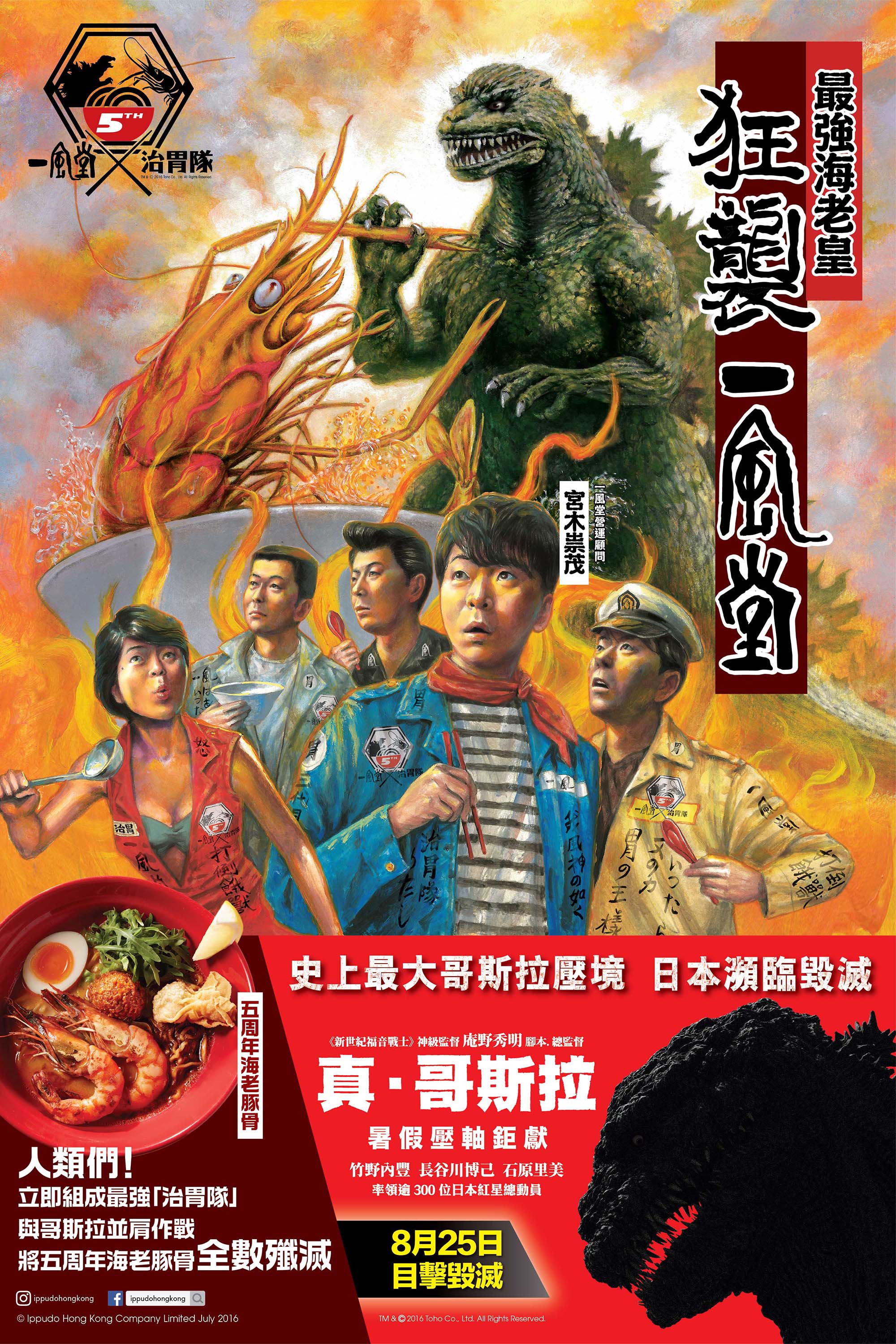