To honour the Portuguese summertime tradition of spending time outdoors engaged in family activities and outdoor barbecues, Casa Lisboa's Chef Edgar Alves is introducing classic northern fare with a fiery twist in his new summer menu. Combining dining entertainment with smokey flavours, the four dishes are presented and lit up in flames at the table to drive home the notion of festive countryside barbecues. Which is great, because you know I only want to leave the comforts of my own home willingly when I'm being entertained and pampered.

Aside from the hot new additions, Casa Lisboa is also presenting a 7-course seasonal tasting menu to further immerse its Hong Kong diners in the traditional flavours of northern Portugal. Armed with the challenge of diving into a hearty lunch sitting where we will sample a combination of 10 courses, we loosened the notches on our belts a little and strapped on our metaphorical bibs. 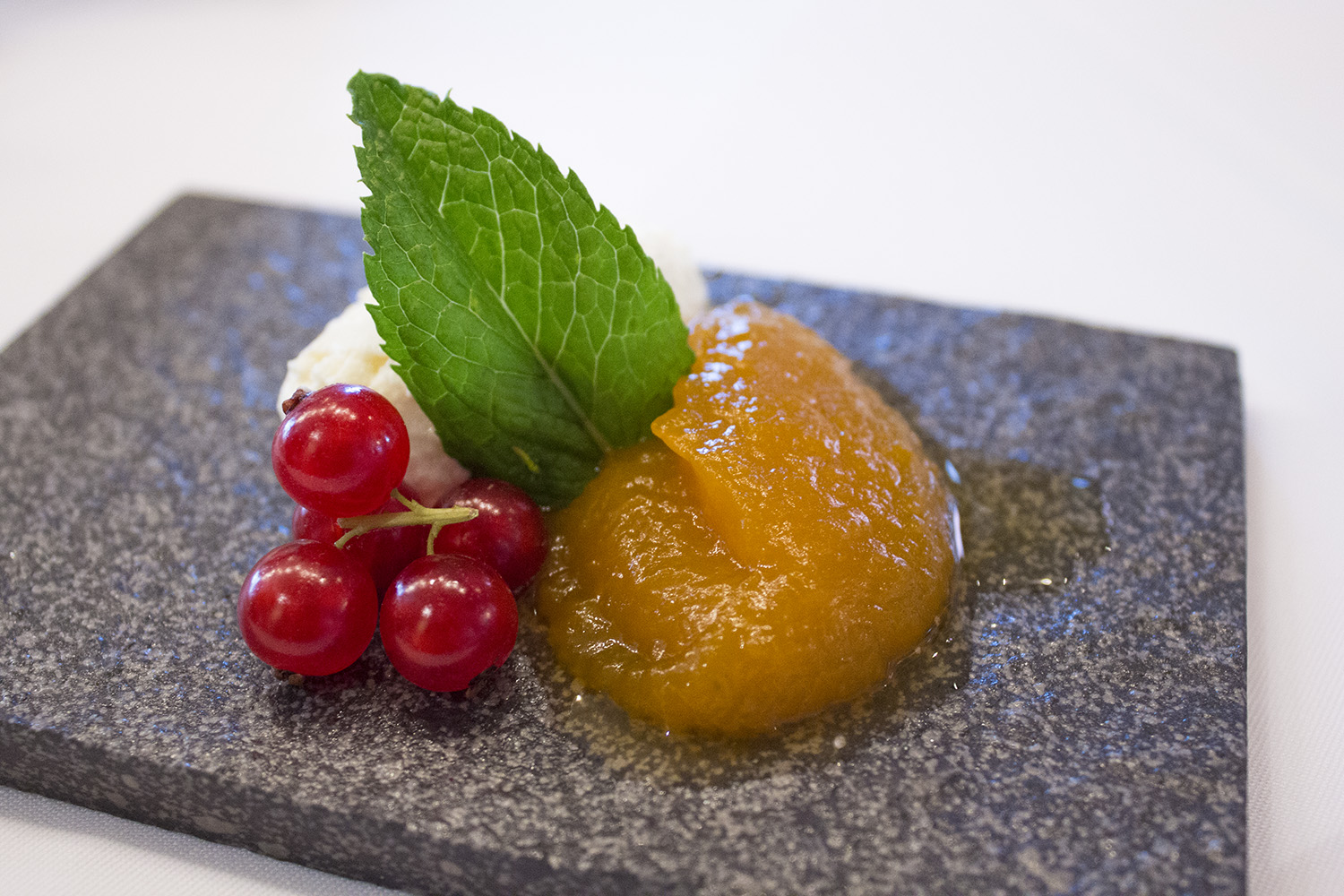 Our starter of homemade Portuguese cheese and pumpkin compote was a light and mild number, with flavours so sweet and delicate that it could have passed for a dessert nibble. The homemade cheese had an airy consistency, and the mint leaf provided a zingy contrast in flavour. It's a successful dish, but we found it a little strange to have been served something so sweet as a starter. 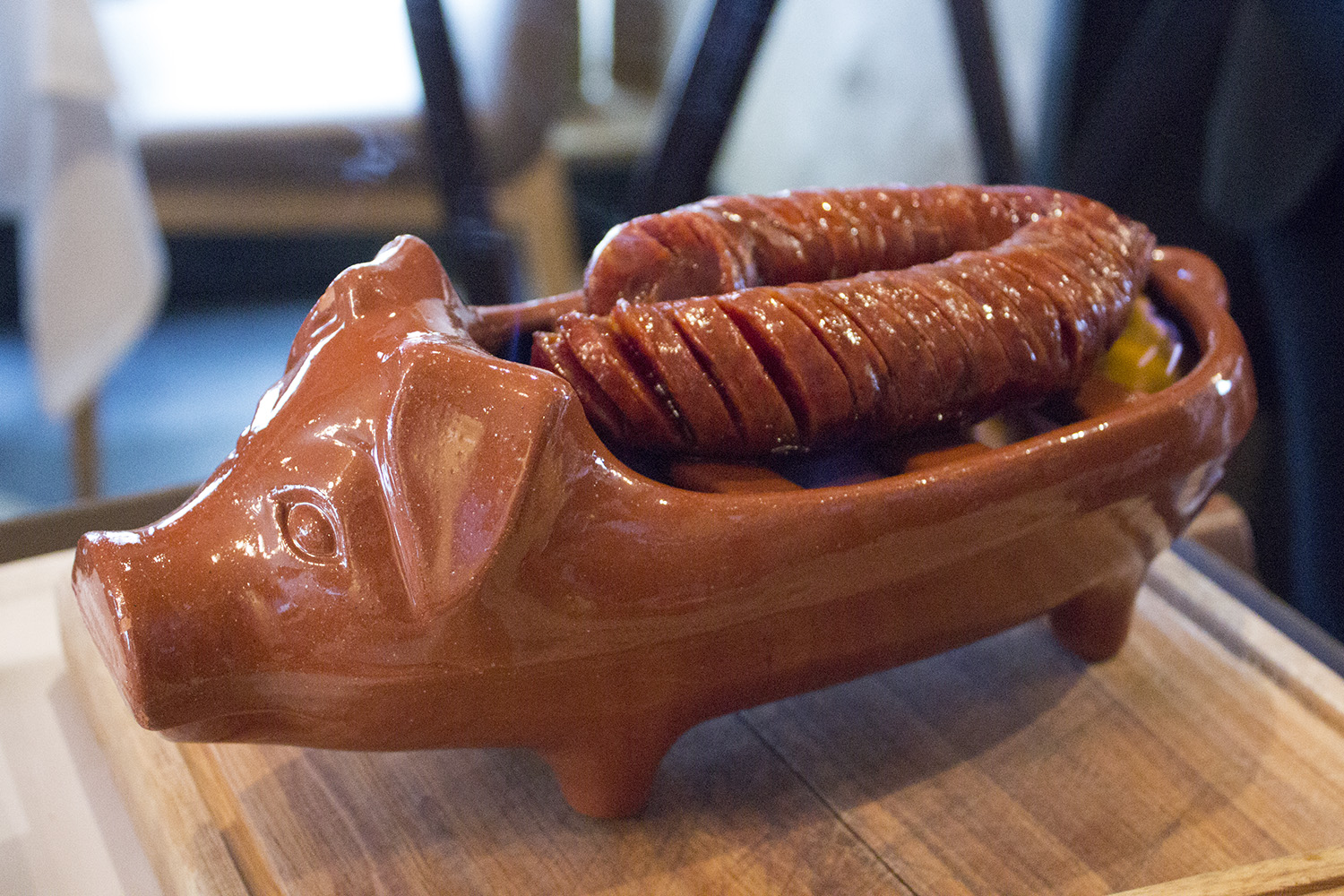 Cute and tasty, the Portuguese sausage flambée was served atop flames on a ceramic pig vessel, sizzling away before our eyes. Crispy-skinned and salty as only cured barbecued meat can be, the traditional and smokey chourizo provided the wake-up call our tastebuds needed after the moderate starter, and left us salivating for more. 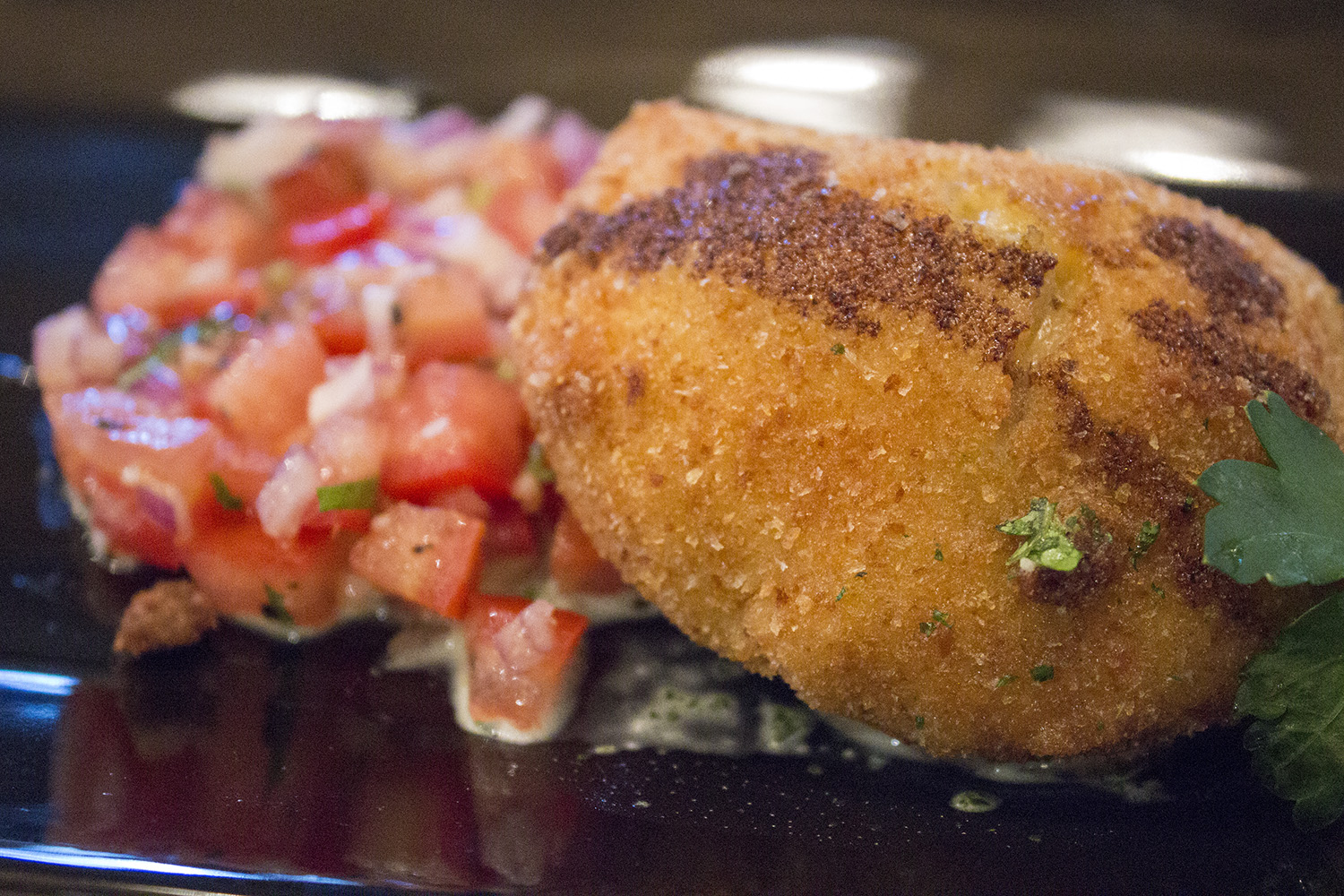 Chef Edgar spiced things up with the stuffed shrimp cake; it came with a tangy, sharp, and interesting flavour profile courtesy of the fresh tomato tartar and coriander sauce. Dig into that with a forkful of the crumbly shrimp cake and it was a soft, succulent match made in food heaven that got polished off of our plates in a matter of seconds. 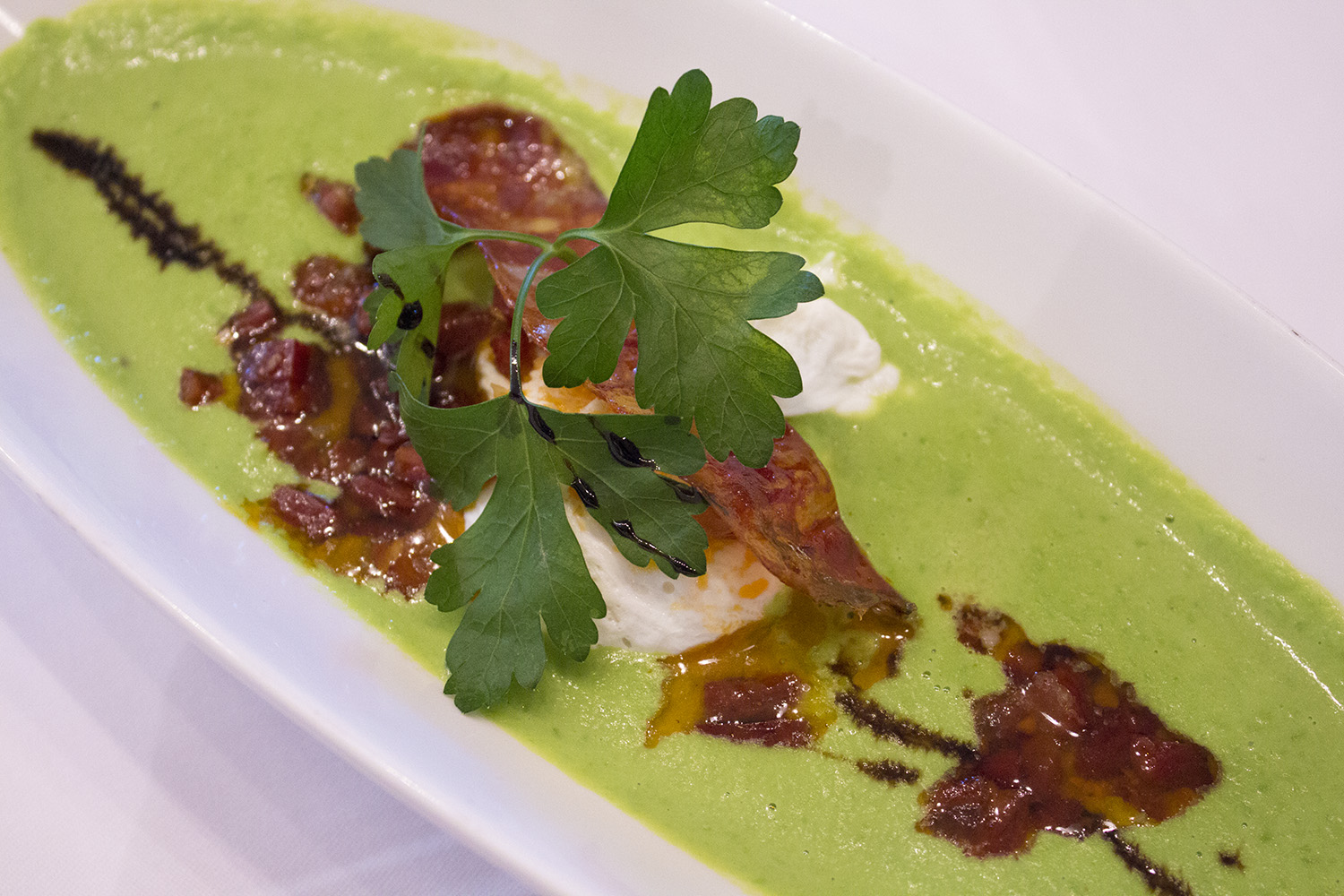 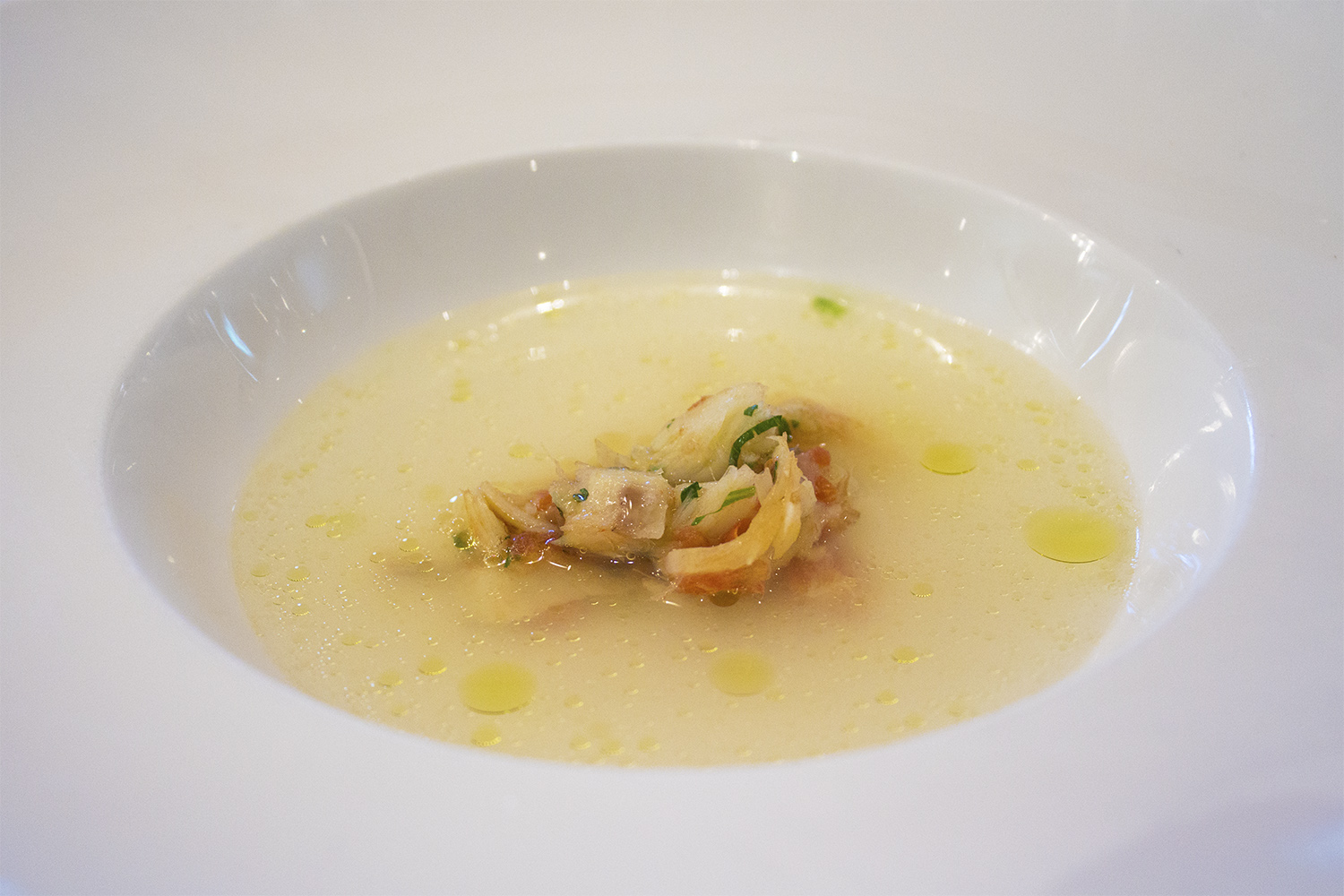 What would Mediterranean summers be without summer soups? Being the first course we've had so far that prominently features greens (even if only mostly in colour), the dense fava beans cream was refreshing and soothed our bellies with its warmth, moreish taste. Following closely was the bacalhau, tomato, and coriander soup, a much milder option with a delicate, blander taste, but it proved to be just the thing to cleanse our palates and prepare us for the mains. 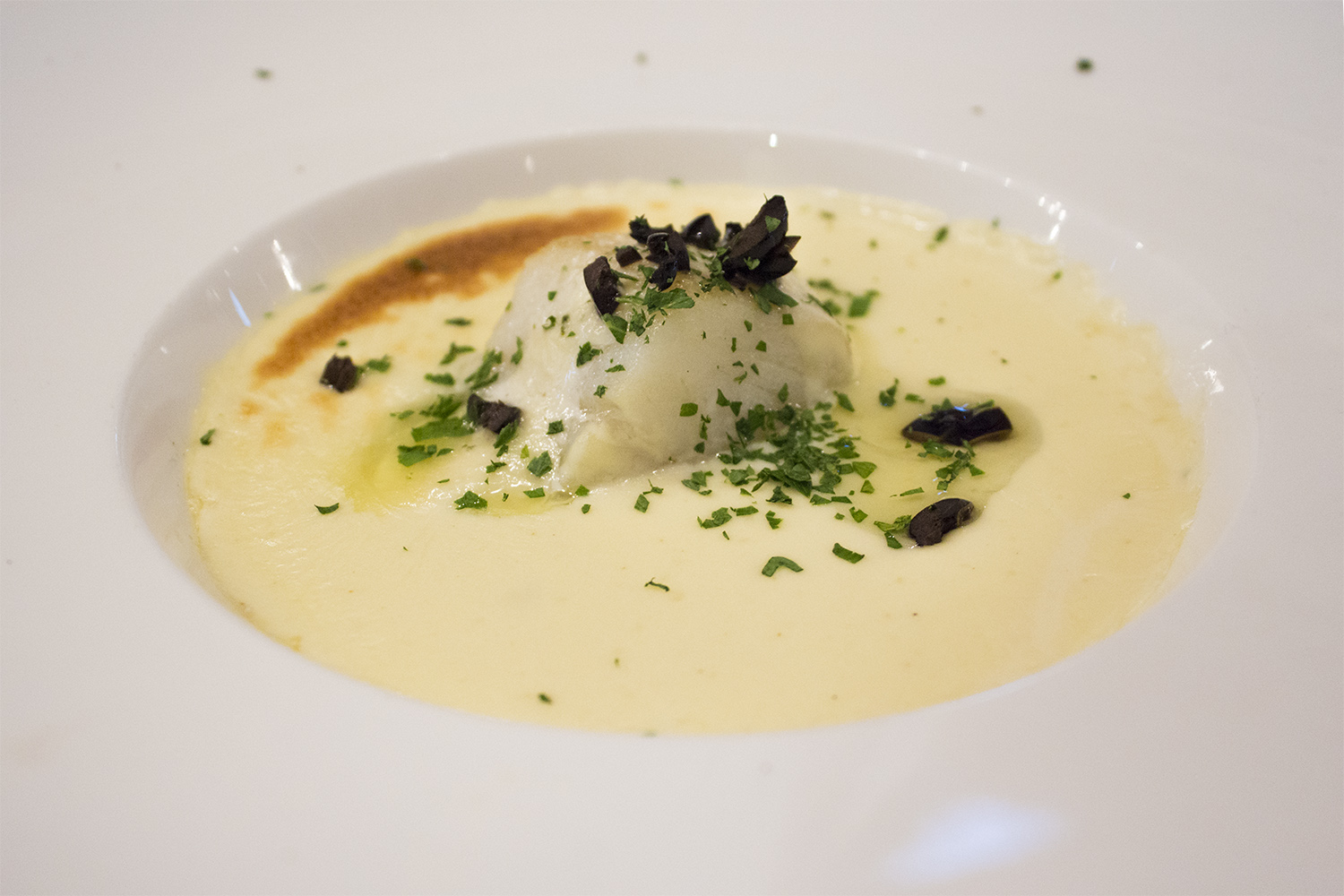 Bacalhau featured heavily on Chef Edgar's new menus and we loved his delicious and sophisticated take on the bacalhau à zé do Pipo, a common codfish dish in Portugal. We broke through the top layer of scorched skin to scoop up heavy and creamy potato purée and moist oven-baked cod and let it melt on our tongues. 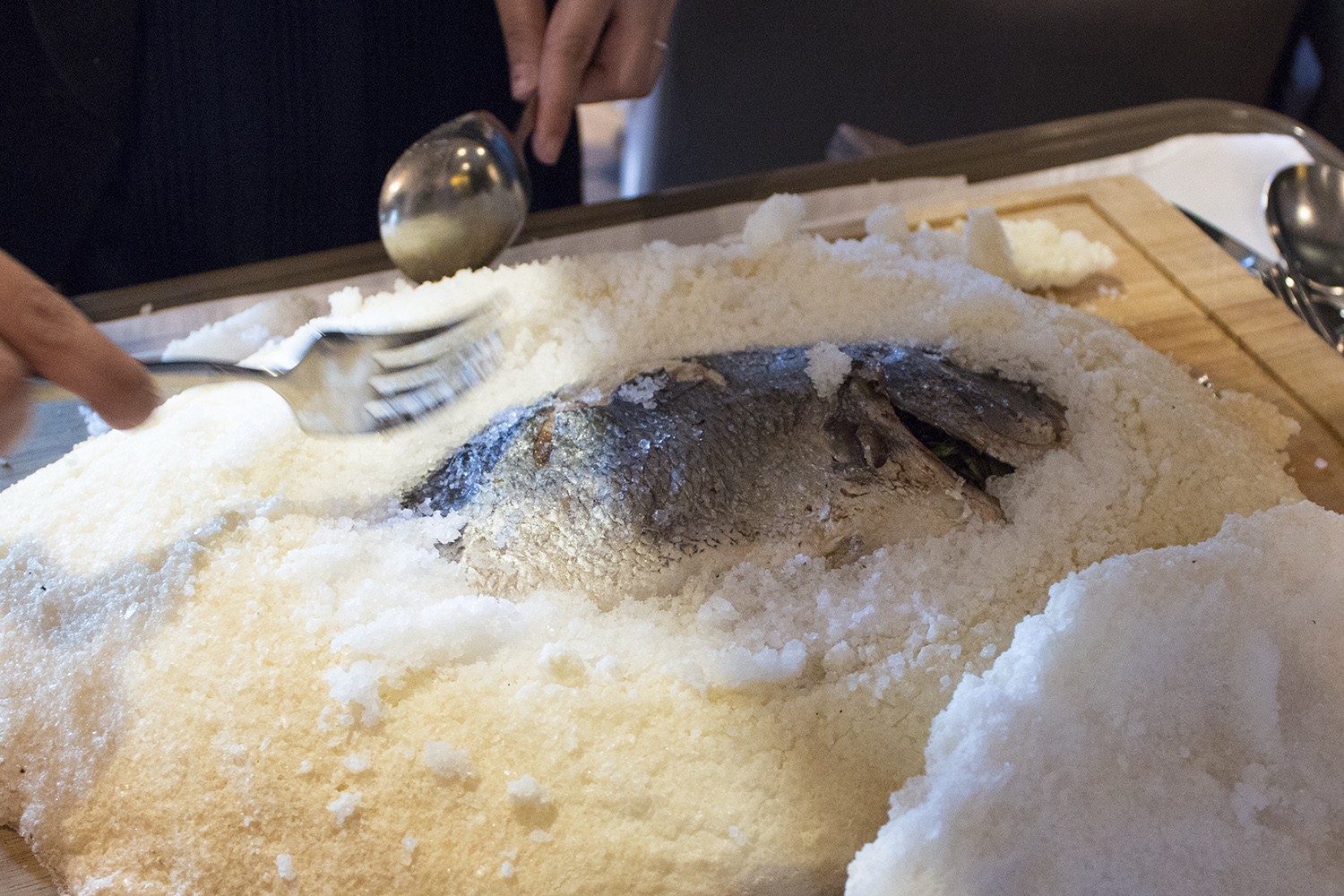 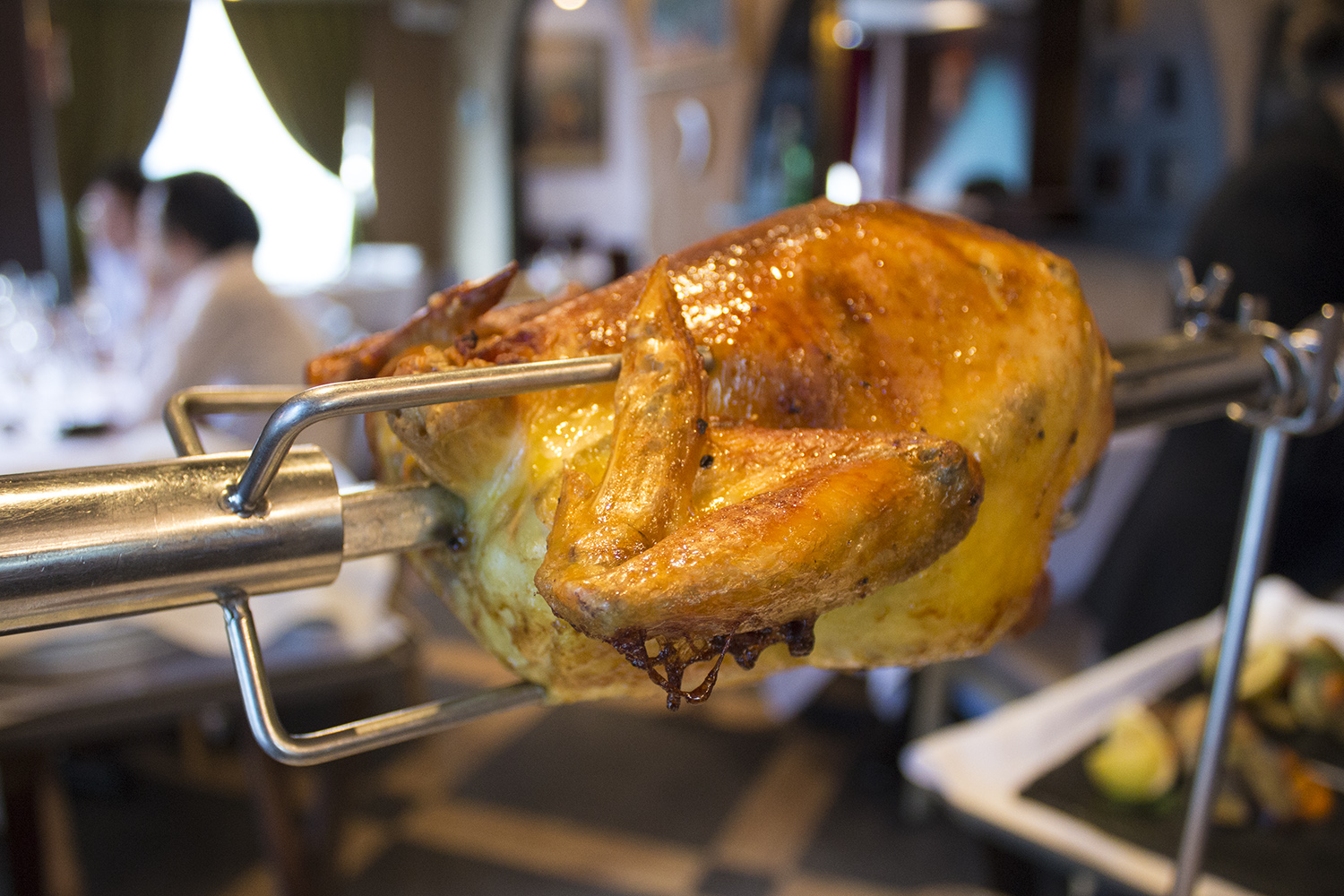 Adding to the entertainment value, the Atlantic sea bream and flaming piri-piri chicken were wheeled out on separate trolleys and set aflame. While the chicken happily crisped away above the fire, the staff set to work cracking the salt crust away from the sea bream with a delicate and calculated extraction method.

Sparingly seasoned with just salt and pepper before its encasing, the sea bream emerged from its cocooning phase to pack a flavourful punch and took us by surprise with its elevated natural taste. Keep it simple, and ye shall succeed, it seems. The piri-piri chicken was excellently executed in its tenderness and moistness, but the side vegetables, albeit well-seasoned, were a little too soft for my taste. 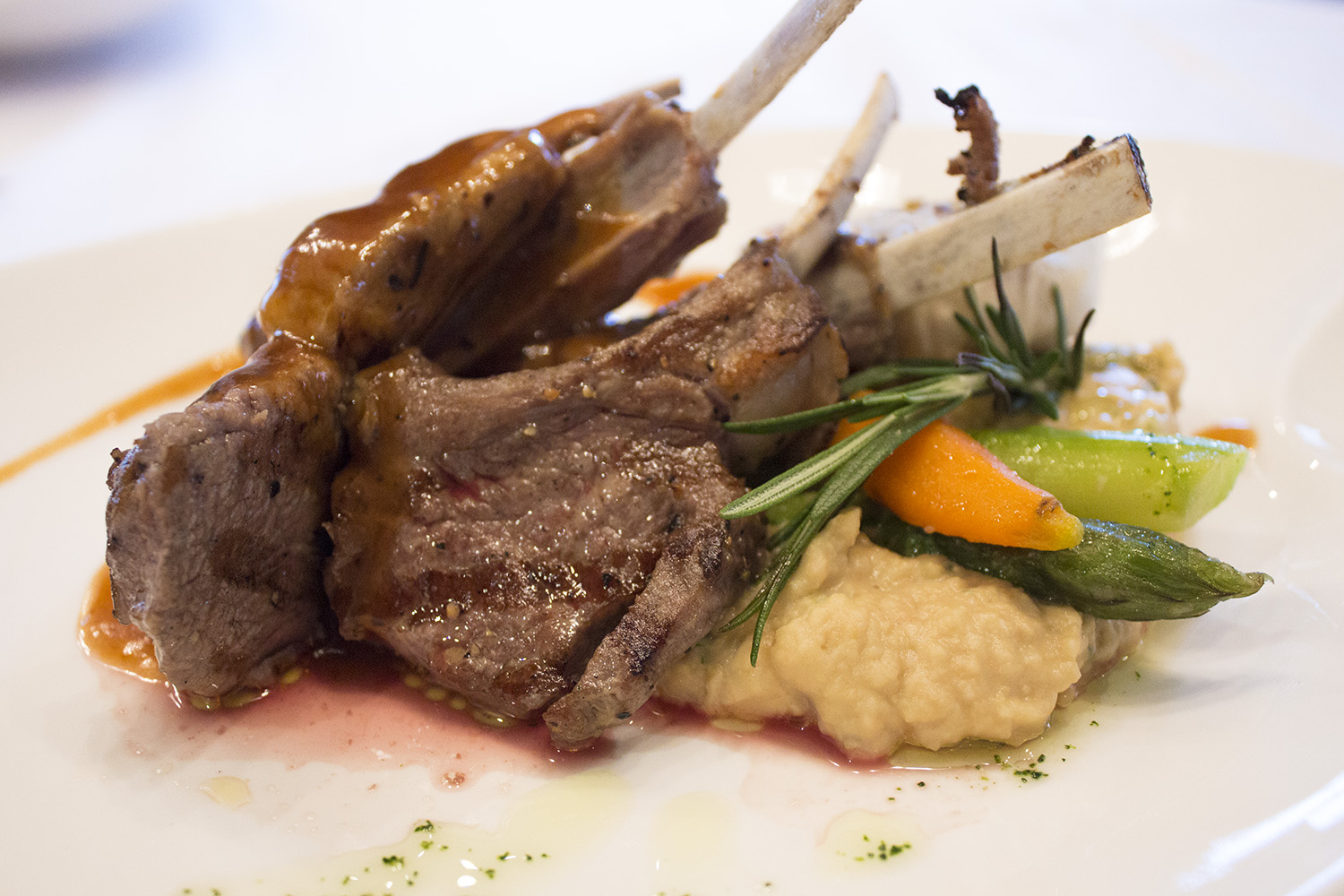 The flame-grilled baby lamb rack came with a side of perfectly crunchy vegetables and a whole, roasted garlic clove. Rustic and classic, the lamb was flavourful and juicy and, together with the mashed chickpea and firm asparagus, formed a trifecta of tastiness with every forkful. 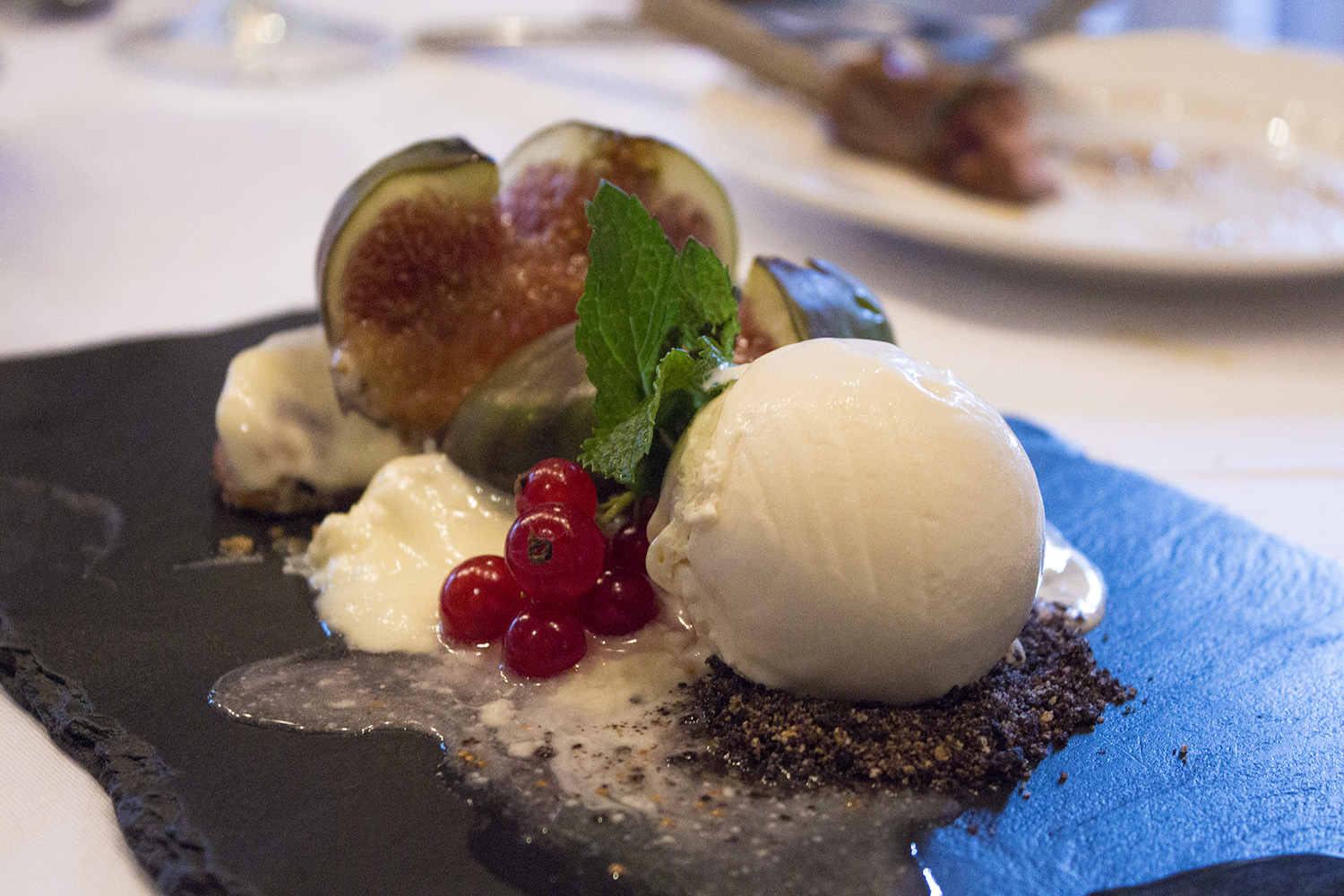 With an unassuming name, this dessert proved itself to be anything but. A plump fig sat atop a throne of hearty goat cheese and pastry, with a side of a dollop of vanilla ice cream. This was a sweet, tangy, and chewy bite to round up our lunch.

As a whole, we found the new fiery and seasonal tasting menus to be a success, with the piri-piri chicken and Portuguese sausage flambée taking the spots of personal favourites. Chef Edgar elegantly combined sophisticated and unusual flavours to elevate the family-style dining aspect typical of northern Portuguese fare, and the result was something quite unique in Hong Kong's restaurant scene. At the price tag of $488 per person, the tasting menu may not resonate with every audience and their budget, but Casa Lisboa's lunch offers are available at a very reasonable price of $190 per head, with the option of creating your own lunch set from the dishes featured in their extensive regular menu. The flavours and experience we've had at Casa Lisboa cements it as a reliable choice for authentic Portuguese fare in Hong Kong, but don't let me tell you that; try it for yourself and see what you think.