Generous portions, flavourful chicken and delicious drinks in the heart of SoHo

It's been over a year since we've last written about Flaming Frango, and a solid dining destination is always worth mentioning again. It was high time for us to have another round of exceptional chicken, so we recently revisited this quiet SoHo stalwart to suss out if their piri-piri-focused menu is still as fiery as ever.

If you've not heard of Flaming Frango, we don't blame you. It's not a standout place on Staunton Street: the exterior is unassuming and modest, with a couple of tables outside for people-watching; it's the kind of place you're likely to walk past on a speedy stroll through the area. But if you've peeked inside, you'll immediately notice the bright red high chairs and vivid murals, and that's enough to pique our interest. The menu looked delicious from top to bottom and our hunger pangs were raging, so we lost no time in diving into the feast. 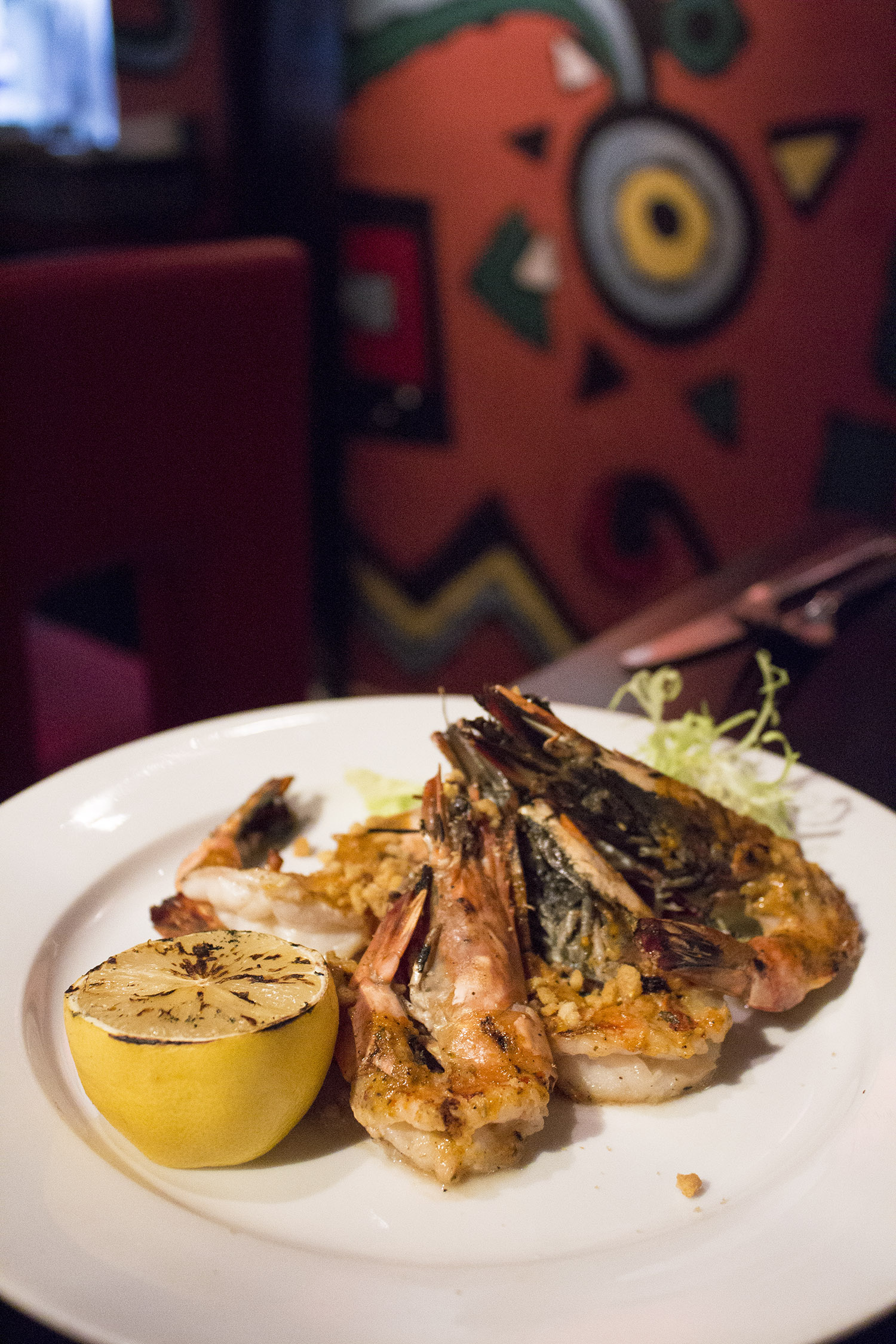 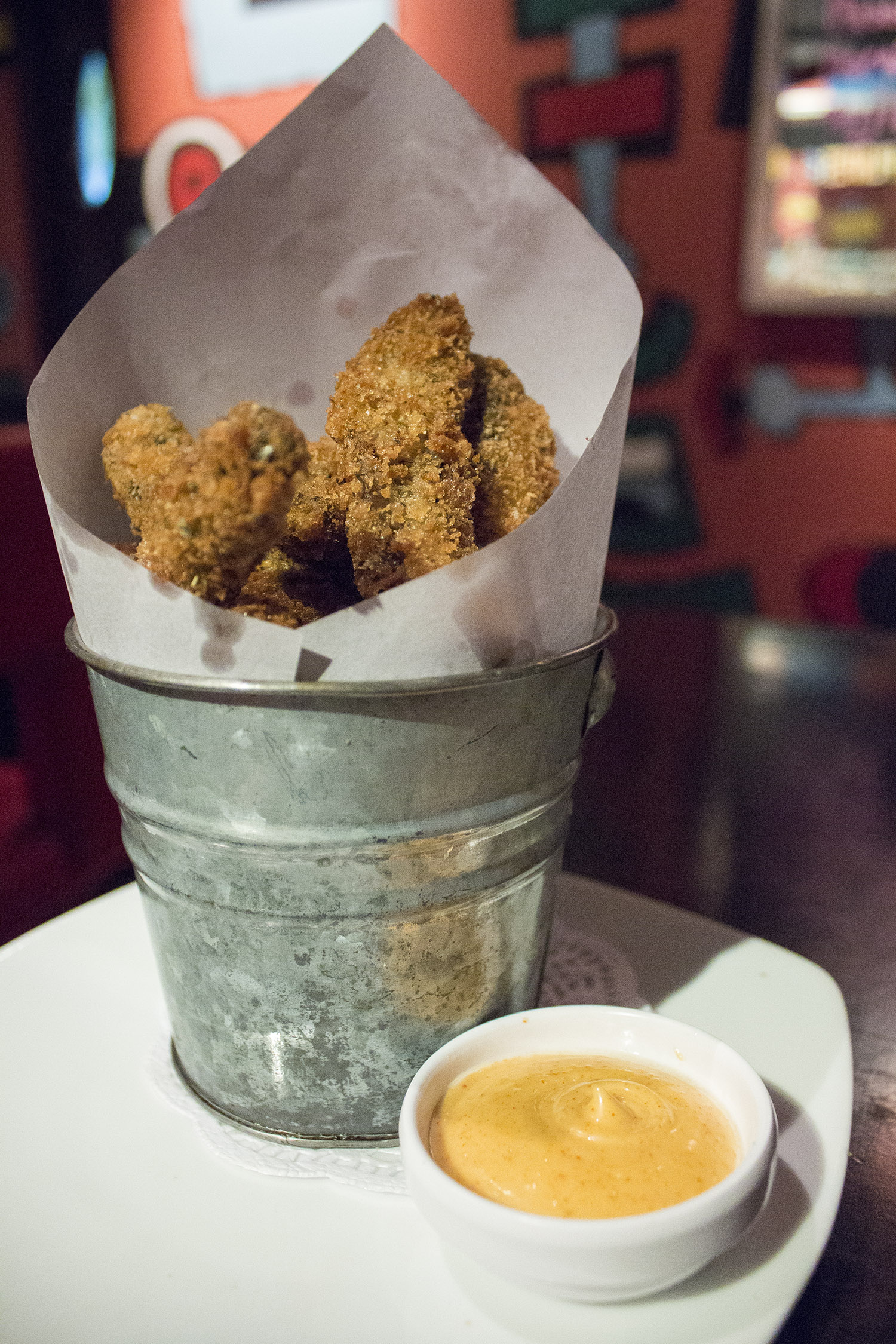 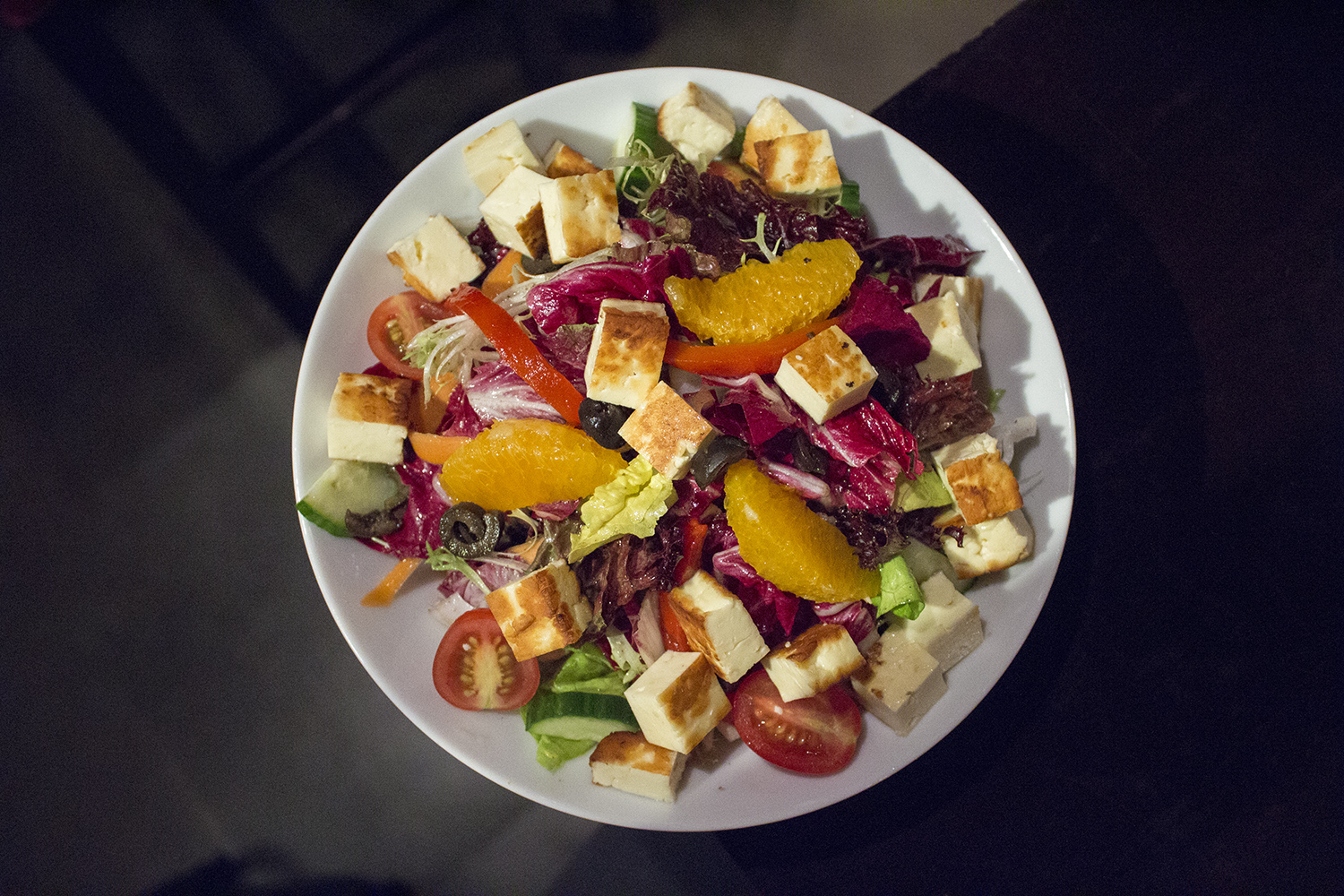 Our starters were varied, colourful, infinitely moreish and, best of all, perfectly seasoned and generously portioned (which made the request of three starters a bit of overkill on our side, but we regret nothing). The portobello mushroom strips ($78) were lightly breaded and golden fried, served with a side of piquant 'pirioli', Flaming Frango's special housemade piri-piri aioli. Earthy and rich in flavour, with a chewy texture that reminded us of aubergine, the breading was surprisingly and pleasantly light, allowing the full-bodied mushrooms to take the limelight. The piri-piri prawns ($138) were marinated in garlic and homemade piri-piri mix and perfectly sautéed, with a dash of lemon to pull out the flavours from the succulent flesh. We especially liked the Mediterranean salad ($108), which so often means a run-of-the-mill line-up of greens, olives, feta, tomato and cucumber, but this version was styled up with additions of sweet orange slices, halloumi cheese and strips of juicy red bell peppers. Tossed in Frango's house dressing, we couldn't stop eating this one (but had to, for the mains were on the way). 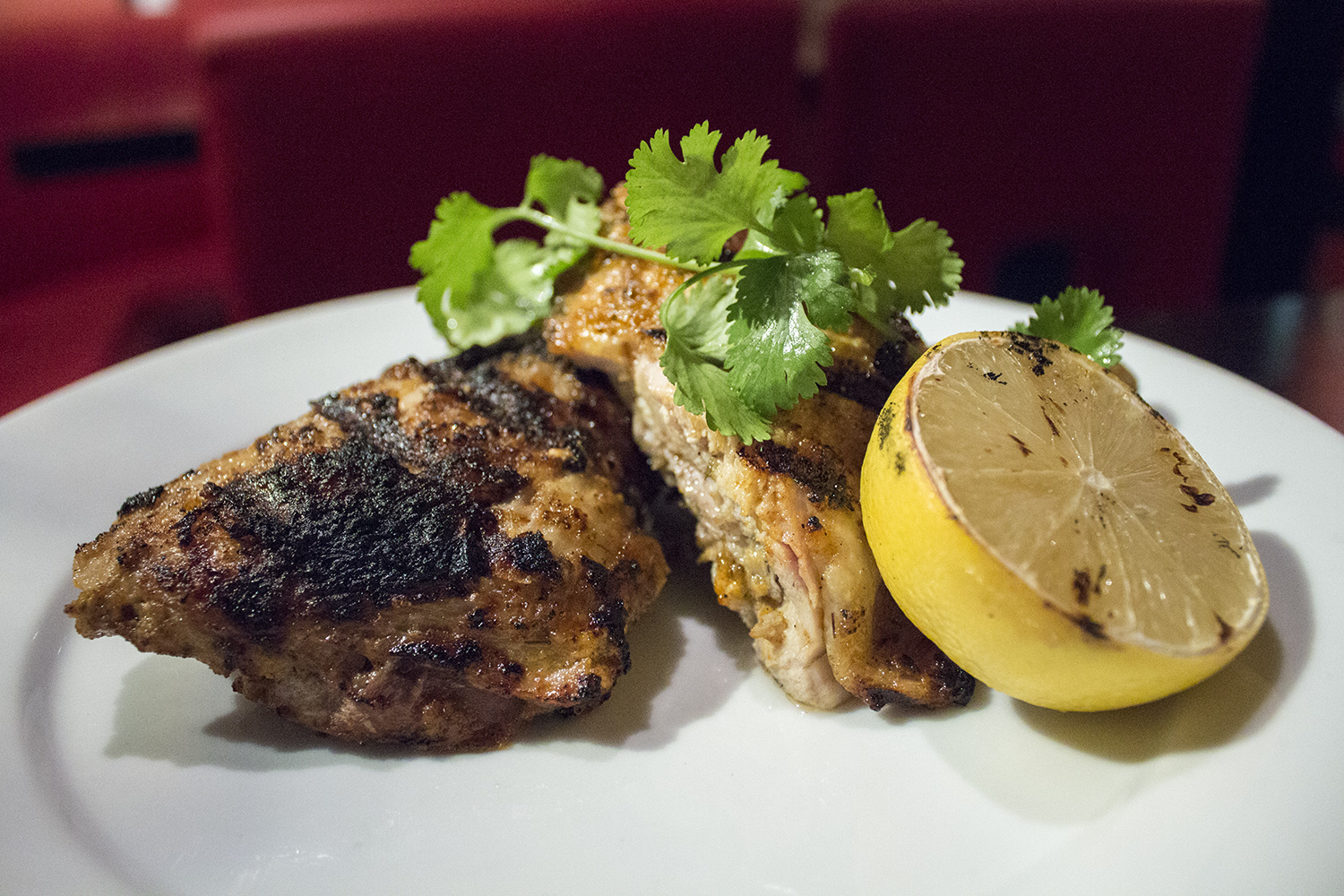 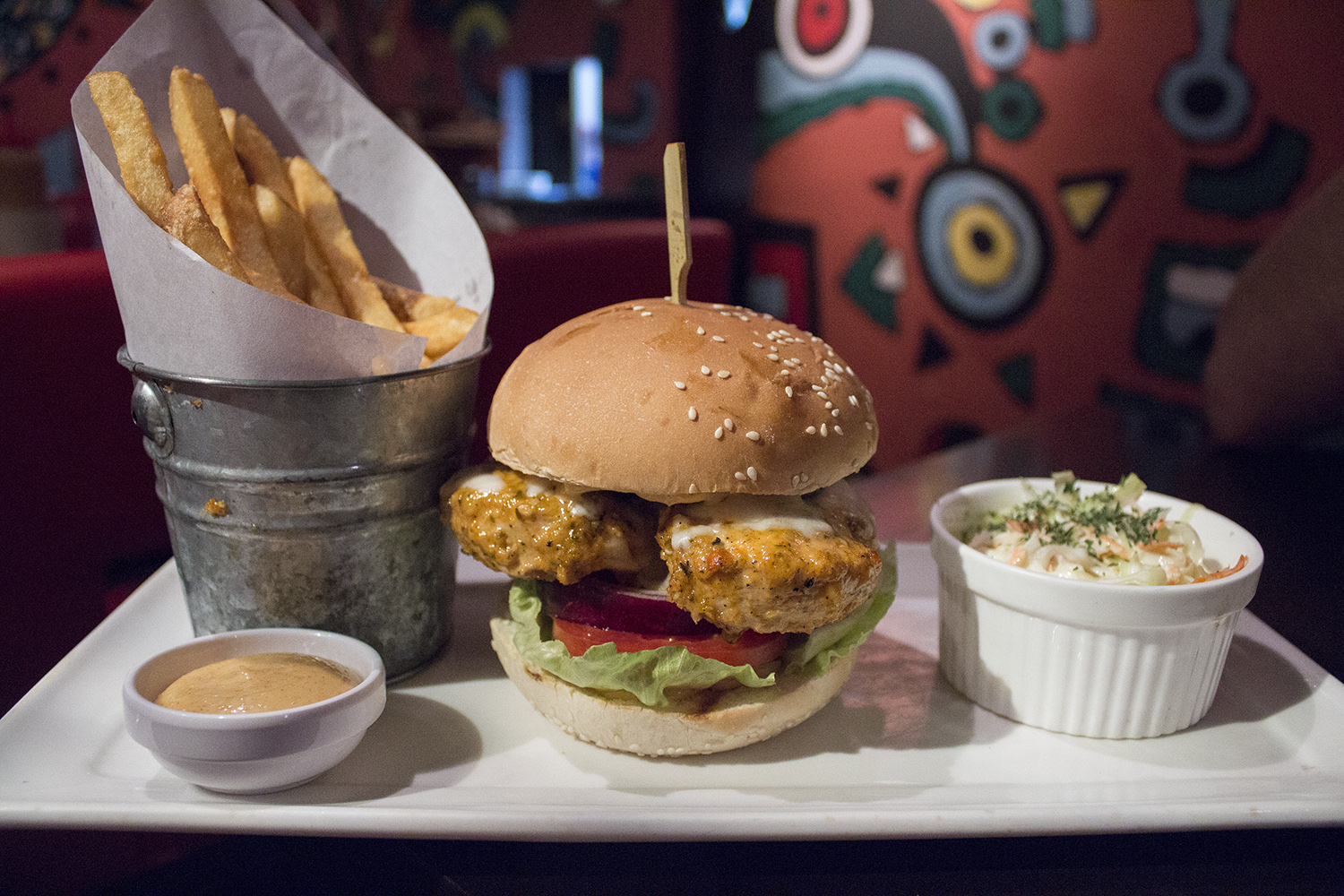 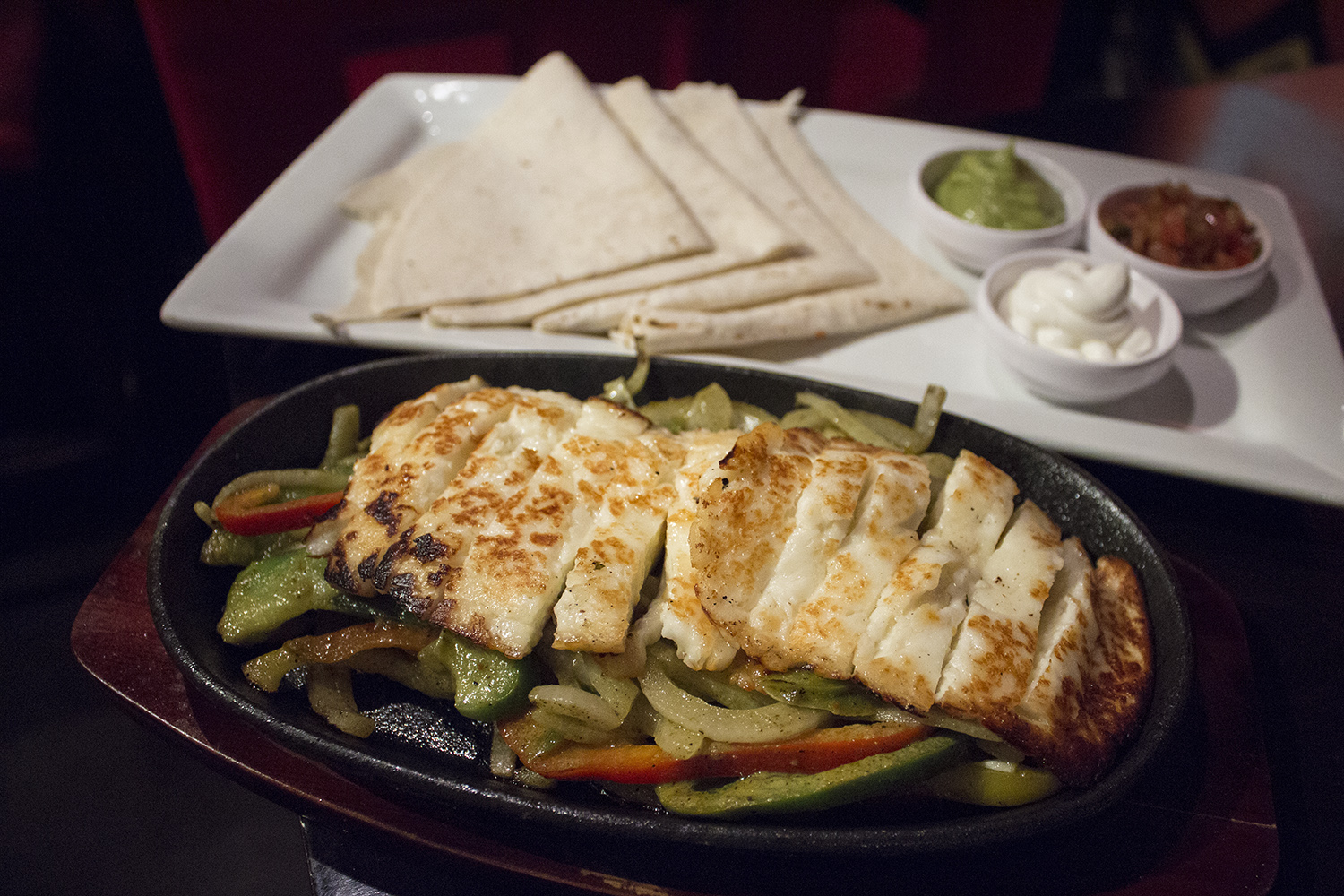 Moving on to the star of the show: the infamous piri-piri chicken. Flaming Frango sources its poultry from Argentina, currently one of the largest chicken exporters in the world. The restaurant carefully selects its produce to ensure the best quality, and it shows; the 1/4 piri-piri chicken leg and thigh ($88) was a great indicator of how Flaming Frango does its chicken: perfectly seasoned, bursting with flavour, juicy and tender. Marinated in homemade piri-piri mix for 24 hours and flame-grilled, the textural contrast between the blackened, crispy skin and soft flesh extracted more than just a couple of mmms at our dinner table. The level of spiciness wasn't a turn-off for the more chilli-shy amongst us either; everything was spiced to the edge of 'bearable' and 'just a tad exciting', not so much so that you'll be immediately reaching for water. We were ungainly loosening up a few buttons by the time the chicken and mushroom burger ($168) arrived, but there was no chance of us passing on it. The slaw was sweet, the fries moreish. We weren't huge fans of the burger buns, but we certainly liked everything in between: the cheese, red onion and the thick-cut slab of tomato were all winners in our books. Did we mention the supersized pieces of chicken that were bursting out from underneath the buns and fixings, dripping marinade and sauce over everything? The photos speak for themselves.

The unusual standout of the night was the halloumi cheese fajitas ($138). Served on a hot platter with onions and bell peppers, with sides of sour cream, guacamole and pico de gallo, the halloumi arrived at our table smoking with anticipation. Though not as memorable as the other mains in flavour, we thoroughly enjoyed the move away from poultry for a little bit of variety. 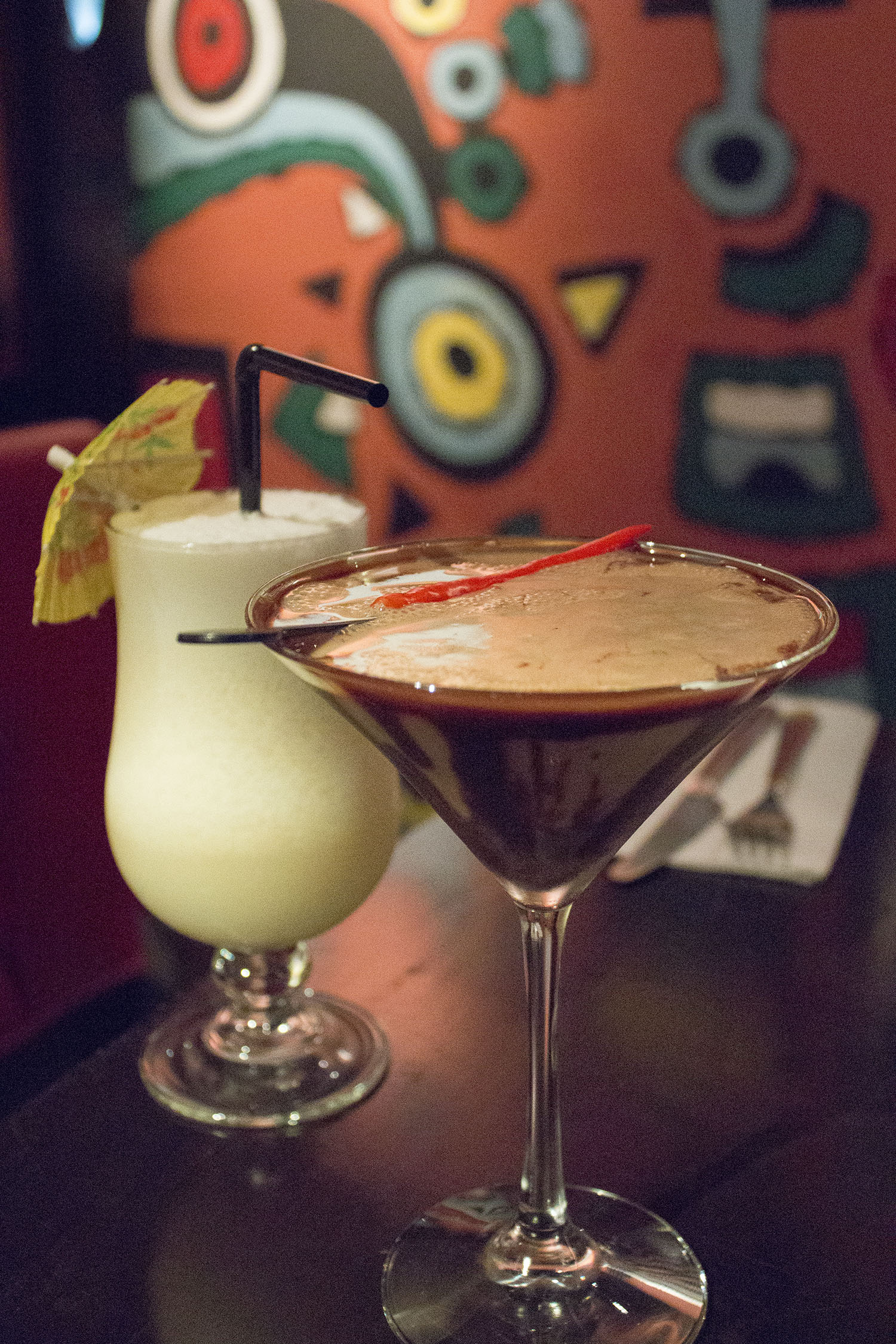 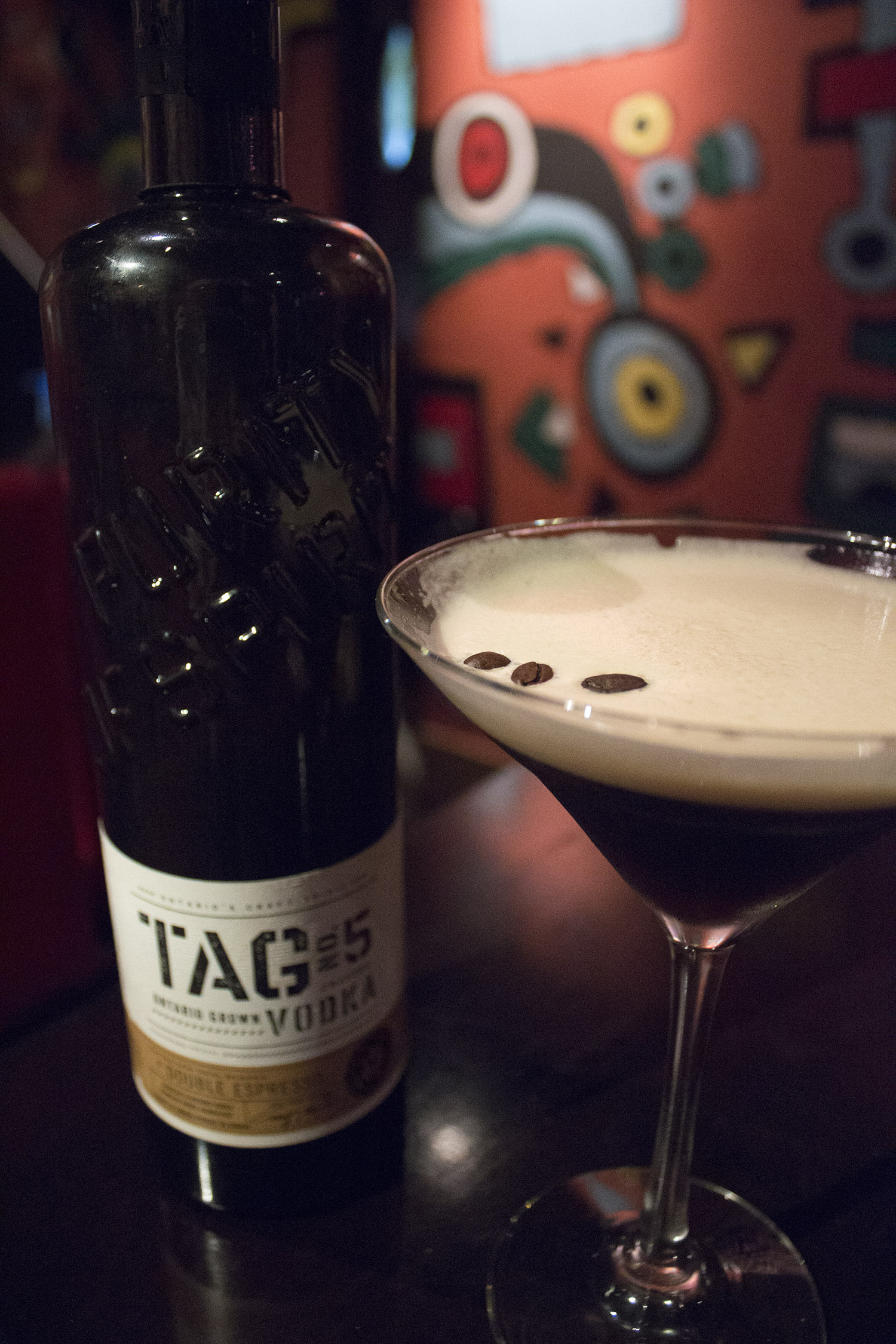 This time round, we thoroughly enjoyed the lychee and lemongrass colada ($85); the drink was balanced, quite subtle and not too alcoholic and proved to be a smooth, sweet and fruity sipper and a much-needed refreshing accompaniment to the fiery dishes. The piri-piri chocolate martini ($85) was a little heavy on the vodka, but we enjoyed the adequate spicy kick to it. A surprise of the night came in the form of Flaming Frango's espresso martini ($88). Hands down, one of the best espresso martinis we have tasted; we highly recommend it. Using a more unusual (and slightly secret) ingredient sourced by Rex Kumar, the general manager, this outstanding drink uses Tag 5 Double Espresso Vodka from Ontario, Canada, as the base with additional espresso elements – instead of just run-of-the-mill vodka and then having to compensate with heavy-handed espresso flavouring. Smart move; we enjoyed the resulting richness in aroma and flavours a lot more than the regular recipe and eagerly slurped our way through this well-blended drink (which didn't last very long).

Generous portions, flavourful chicken and delicious drinks? We like it. No doubt that it must be challenging to maintain a largely poultry-focused menu when it's rarely the number-one choice amongst most avid meat eaters, but Flaming Frango does the job so well that I'd consider it one of the best spots in SoHo to grab some chicken. Serving up homestyle cooking with a twist, we can all agree that this is a great spot for a casual meal.

Jeniffer Chiat | about 7 hours ago