And it's a no from me

With an office space located in the heart of Wanchai, I'd like to think of myself as a Wanch dining veteran. I've seen the eateries of the 'hood come and go, some with a nonchalant shrug and barely audibe 'eh' and some with genuine lamentation (we'll always remember you, Dumpling Pro). Countless facades hailing soon-to-be new openings are a familiar sight, and I like to be first on the scene when the construction curtains draw back to reveal the show.

一木小料理 Ruto is brand new. So new, in fact, that at the time of my writing this, there was not yet an OpenRice entry for the restaurant (which is my go-to measure for gauging how far behind I am on new openings). Promoting Japanese 'home feel' food, we had high hopes when we first passed by; the decor is minimalistic and tasteful, with wooden furnishing and large windows that light up the tiny restaurant. We love the 'less is more' aesthetic of Japanese homes, and entering Ruto made us feel like we could bask in that mindset. That, and a soft opening special lunch offer drew us in.

Ruto's lunch menu looked promising; available in a mix-and-match set, we selected three toppings each on a bed of rice with mochi wheat and a mug of lychee and longan tea for a neat price of $75, an opening special offer, the menu proclaims proudly. Immediately, we were told that one of our chosen toppings, the Japanese croquette with beef, had sold out for the day. No worries, we'd have the braised beef tendon with yuzu pepper instead.

We were served two separate sets soon after. One came with grilled chicken in sesame sauce, braised pork belly in tea and tofu with miso sauce; the other with braised beef tendon with yuzu pepper, braised pork belly in tea and shakshuka runny egg in a peppery tomato sauce (why we had the option of selecting a North African dish on a Japanese menu was beyond us, but we decided to roll with it). 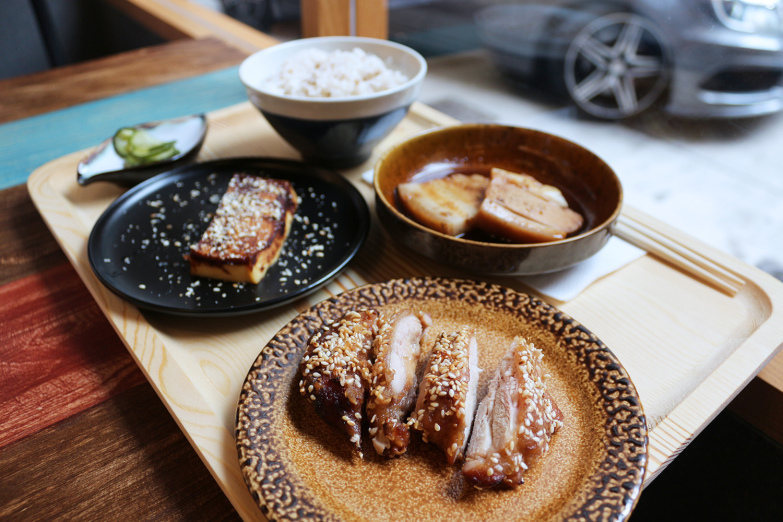 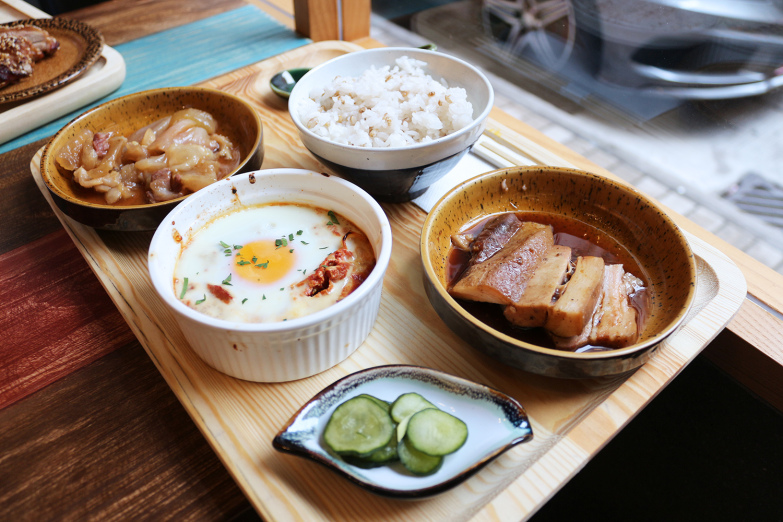 Good things first, of which there were few: the pearly rice was delicious. Hot and steaming, with a firm bite to it courtesy of the mochi wheat, this is the kind of rice we wish we had at every meal.

On to the not-so-good things: our lychee and longan teas were delightfully hot but tasted more of boiled water with a very faint longan flavour than anything we'd describe as tea. Of the lychee, there was none in sight – or anywhere near our taste buds. At least the mugs were beautiful.

The grilled chicken was well seasoned and bore an evenly crisped skin, but the sesame sauce it was meant to be served with was curiously AWOL. That turned out to be a dang shame, since the meat itself was dry as bone and could have used some form of dressing to lend a helping hand. The same thing happened with the tofu dish; the surface was beautifully grilled and it looked deliciously appealing, but where in the world was Carmen – I mean, the miso sauce?

The braised pork was flavourful as well, and we quite enjoyed the tea-soaked meat – that is, if there had been enough of it. Ours came thick cut, but it had such a large amount of fat that it was impossible to devour the thing whole without leaving us feeling like we'd just consumed meaningless calories. We gingerly picked the paltry meat from the dish and carried on.

Next up, the braised beef tendon. These were utterly flavourless – as beef tendon normally are, so where was the sauce to give it some character? – and too chewy, and not in the gelatinous way in which they're meant to be eaten. We left this dish untouched and sitting at the edge of our table with the hopes that we could make it vanish with an 'out of sight, out of mind' mentality.

At this point, we felt like we had seen it all, but we weren't prepared for the shakshuka. What was meant to be a North African dish of poached eggs swimming in a well-spiced sauce of tomato, chilli pepper and onion – similar to the Western dish of eggs in purgatory – ended up to be a poor imitation of neither. The surface of the dish shone with a plasticky sheen, and the egg itself was resistant to puncture and looked gummy and elastic. Definitely not a good first impression; those are not descriptors we like to associate with food we're putting down our throats. The tomato sauce tasted straight out of a jar, with no discernible real tomato bits, and the advertised 'peppery' taste was completely nonexistent.

We recommend a bit more work behind the scenes. The entire experience was, to the say the least, disappointing. We allow for a certain amount of wiggle room during a soft opening phase (we're not savages, you know), but the hiccups we encountered during our visit were appalling to the point of being inexcusable. It's not uncommon to have a few hurdles to overcome, but without some significant improvements to the dishes on the menu, it's hard to say with any amount of confidence that we'll be back for more. We are, however, aware of the possibility that our lunch experience could have been an unfortunate one-off and the result of an inexplicable 'sh** happens' kind of day, so we don't have it in us to brush off Ruto just yet.

This write-up is based on an anonymous, independent tasting. No monetary compensation was provided in exchange. The opinions expressed here represent the author's; she's so stubborn, it's not like you could tell her otherwise anyway.
review