There was a certain mystery behind Room28. Firstly, its vague name, a relic of its old premises on SoHo's Peel Street. Secondly, the kind of cuisine on which it focuses, which we couldn't quite decipher before, during or even after our visit. Located in prime Sheung Wan real estate spot The Pemberton, with Trattoria Doppio Zero and luxe hair salon Emmanuel F amongst its neighbours, it would seem that we were in for a treat, so we dined here on a rainy day, hoping that the promise of top-class food would cheer us up.

But things were confusing from the start. A dim orange glow for the lighting instantaneously made us sleepy. The walls were either completely bare or covered from ceiling to floor in a layer of generic clip-art illustrations. At the other end of the room, we spotted cartoon character decals. So far, not quite the elegance we were anticipating. 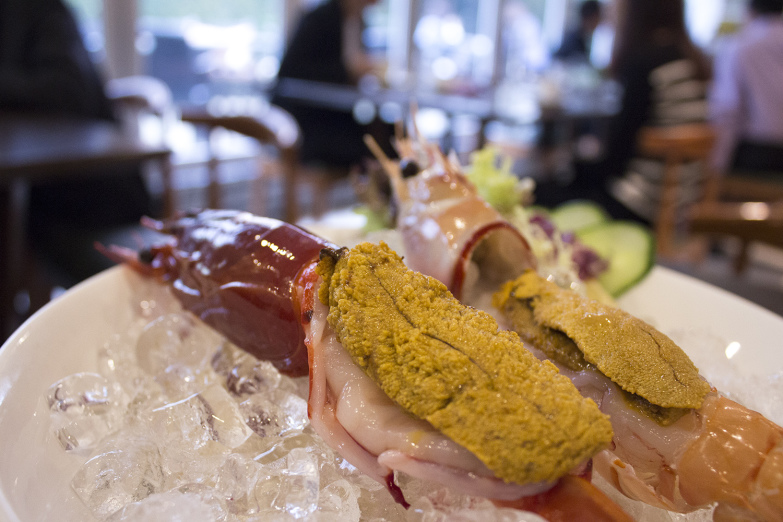 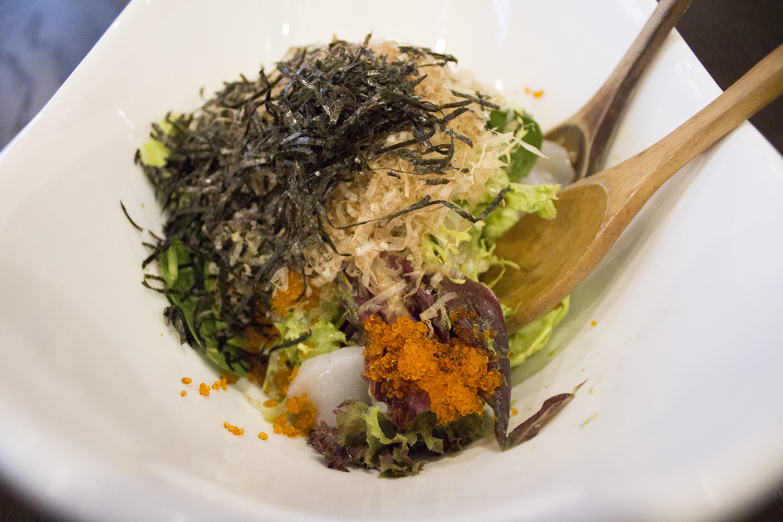 One of the beautiful raw sea critters in our first course bore the unmistakably fishy odour of old seafood, though the wasabi and soy sauce dressing served with it helped to mask its age. In comparison to the New Zealand scampi ($246), the Spanish red prawn ($306) was piercingly fresh and tasted much, much better. The creaminess of the Canadian uni (sea urchin) complemented the prawns well, but the richness of the combination was too overwhelming for our palates; perhaps the addition of uni wasn't truly necessary. We were advised to consume the heads of the prawns as well, but the intensity of the flavours was an overkill and dominated our taste buds, effectively limiting our taste perceptions for further courses to come.

Room28's signature Japanese salad ($158) came to the rescue with a dose of fresh greens and sliced raw Hokkaido scallops. The dish had an overall homogenous taste, perhaps a souvenir of the strong prawn heads we'd previously eaten. It was mostly a leafy pile that the sparse amount of homemade dressing didn't quite reach. We felt that it wasn't enough to leave a lasting impression. It lacked a refreshing kick, but the topping of bonito flakes, wasabi, tobiko (fish roe) and nori added a much-needed salty dimension to the salad. 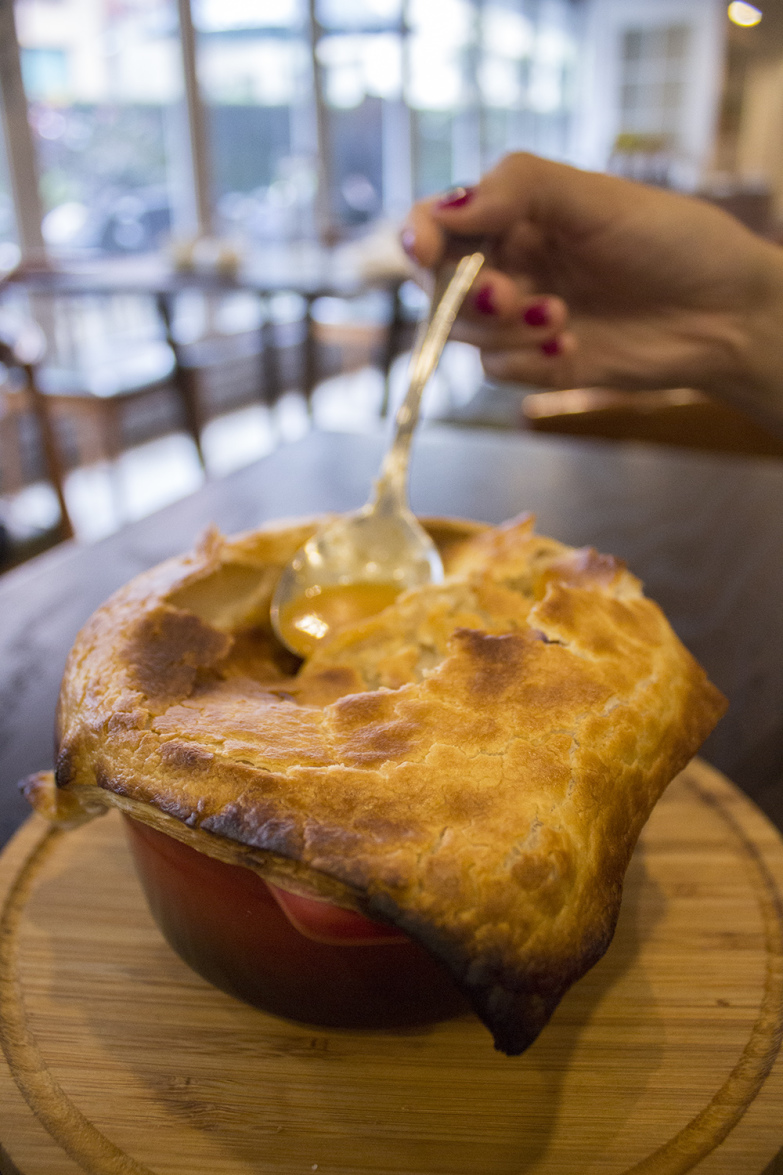 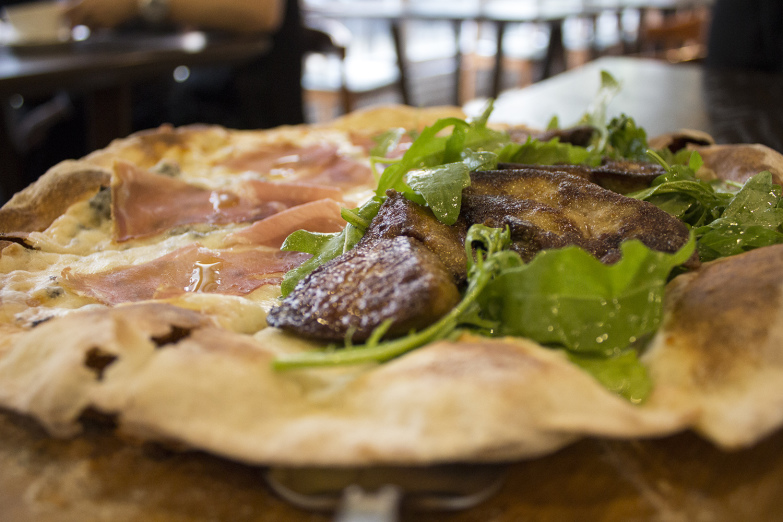 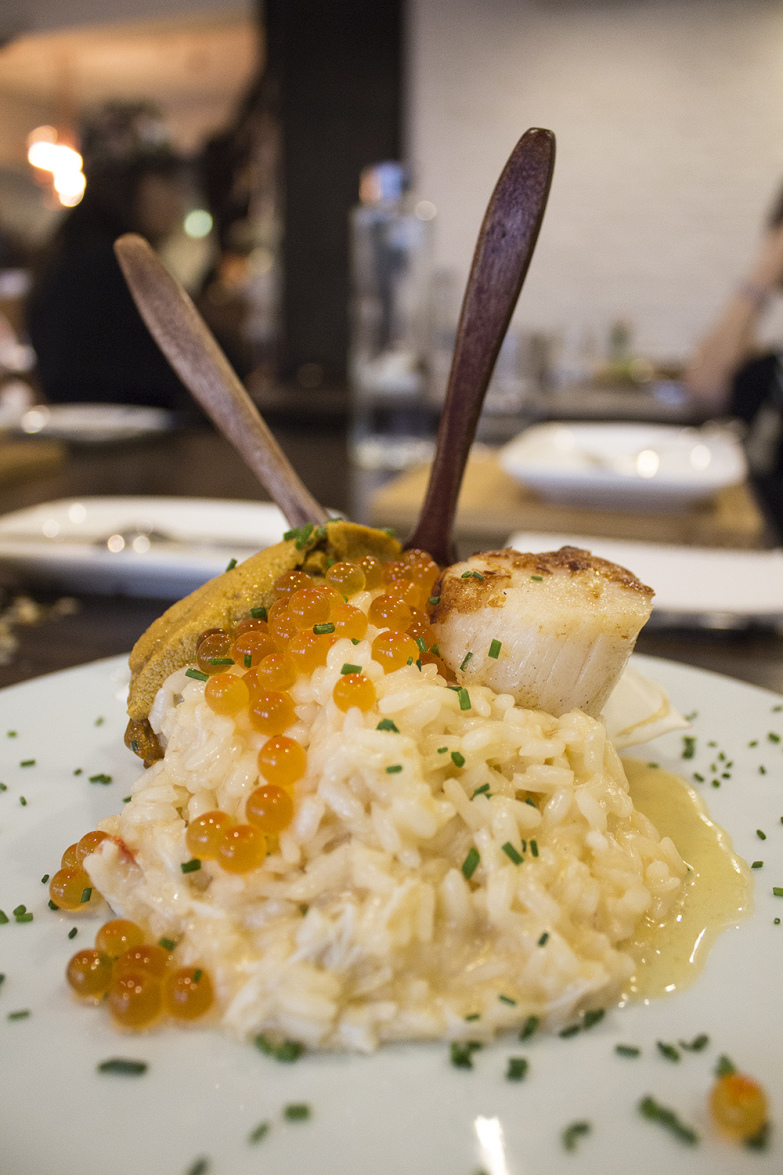 We loved the fresh, buttery filo pastry that covered the cup of classic lobster bisque ($158), which we diligently peeled off until the very last morsel. A sweet creaminess and curious herbal, medicinal undertone (which we later discovered was due to a dash of brandy) dominated the dish, leaving us hankering for every spoonful of savoury lobster that we could find. The substantial texture and rich consistency landed a hit with us.

When asked at the beginning of our meal whether there was anything we didn't eat, we confidently declined, presuming the owner was referring to food allergies or intolerances. This didn't prepare us for the next course of Rougié foie gras pizza ($498). Personal convictions prevented us from truly enjoying those slices, so generously topped with juicy, thick-cut medallions, though we had no such qualms about the Parma ham and truffle pizza ($338) half of the pie (which we'd wager was the best thing we had that day). We only wished it had come with some sort of green topping instead of just meat – perhaps a handful of rocket would have given it more dimension? We were also pleasantly surprised by the crunchiness of the thin, light base, which was one of the highlights of the meal.

The crab risotto ($368) gave us hope with its whimsical presentation, but the opulent choice of ingredients left us bemused. At this point, it was hard to separate what felt like unnecessary decadence from refined gourmet noshing. The excess of 'premium' ingredients made us feel like the kitchen was putting on their best impression of a nouveau riche dining experience. We dug into the lavish heap of rice and found that the pellets were too firm, and it wasn't nearly creamy enough to be rightly called a risotto, though it did have a nice crab flavour. The plump scallop tasted old, and the salmon caviar added a tang to the rice that was overbearingly fishy. We were told to mix the uni into the rice to spread around the flavours, but as it turned out, the uni served wasn't that easy to fragment, so after awhile, we just gave up and ate the thing whole (though, overall, we felt that the sea urchin was wasted on a dish already so rich with other savoury toppings).

Ultimately, this lunch felt more like a lesson than a meal, from which I take away this: less is more. For all our indifference toward the meal itself, the same cannot be said for the service. Our servers were attentive, helpful and knew their customers; regulars were greeted in a chummy, outgoing manner, sociable and intimate in a way that we rarely see in the HK dining scene.

It was difficult to pin down exactly what our expectations were, but we were sad to conclude that the meal did not meet them. We didn't think much of the food, yet the stream of returning customers during our lunchtime visit told a different story about the experiences that are being had at Room28. In addition, the hefty price tag on our meal floored us. Perhaps we just aren't the right target audience.

This write-up is based on a complimentary media tasting provided in exchange for an honest review and no monetary compensation. The opinions expressed here represent the author's; she's so stubborn, you couldn't tell her otherwise.
review