A dining experience that, in all ways, changed our perception of food and the boundaries that are being pushed in modern gastronomy

Because of the scarcity of reservations available (by our rough estimates, at 35 covers per service, two services a day, for six days a week, over the course of six weeks, equated to 2520 bookings sold. Over 60,000 people applied, meaning upwards of 50,000 people were on a waitlist), we felt both honoured and deeply inspired to be able to dine at the NOMA pop up at the Mandarin Oriental in Tokyo on February 6. 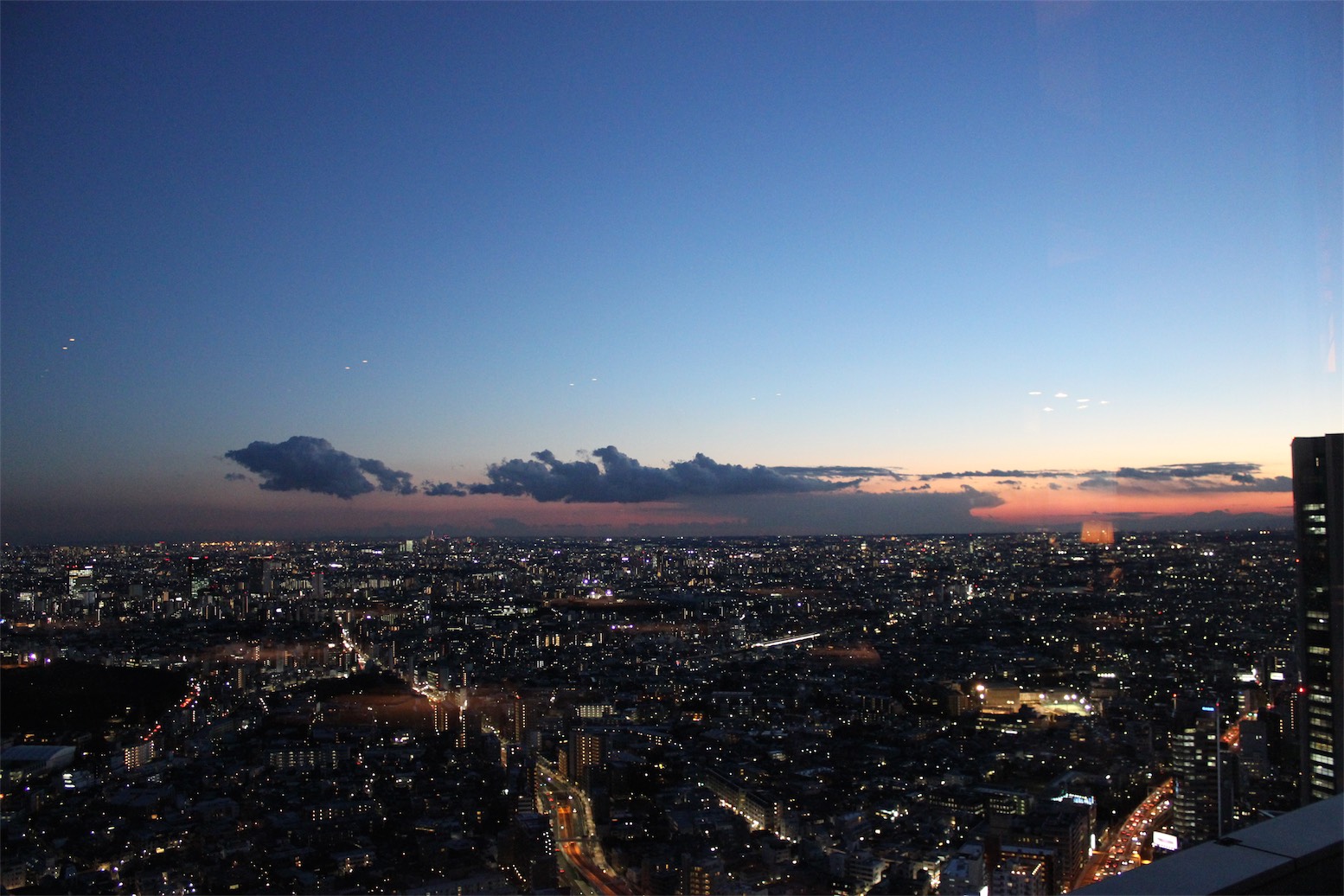 For those unfamiliar with Rene Redzepi and the two Michelin star restaurant from Denmark, NOMA has been ranked best restaurant four years in a row since 2010. The name is inspired as a portmanteau of Danish words "nordisk" (Nordic) and "mad" (food), which indicates the motif driving the Copenhagan based water-front restaurant.

The importance of understanding this cuisine type, and seeking to employ it in our everyday lives, really cannot be overstated. Food is central to human existence, that much is supremely obvious, and yet there exists a collassal disparity between individuals and what they are consuming, leading to ill-health and dissatisfaction. Further, in keeping with the nature of the rampant commercialism that grips us in the 21st century, a willful ignorance has meant that nature’s reserves have been pilaged to feed our appetites for resource-rich foods. Inimical reactions to this thinking have further meant that chefs often rely on heavy, unsustainable ingredients to satisfy the diner. Conversely, seasonal, terrior-led cuisine of the type Chef Redzepi initiates, is unceasingly supportive of gentle practises that safeguard against the destruction of the planet. 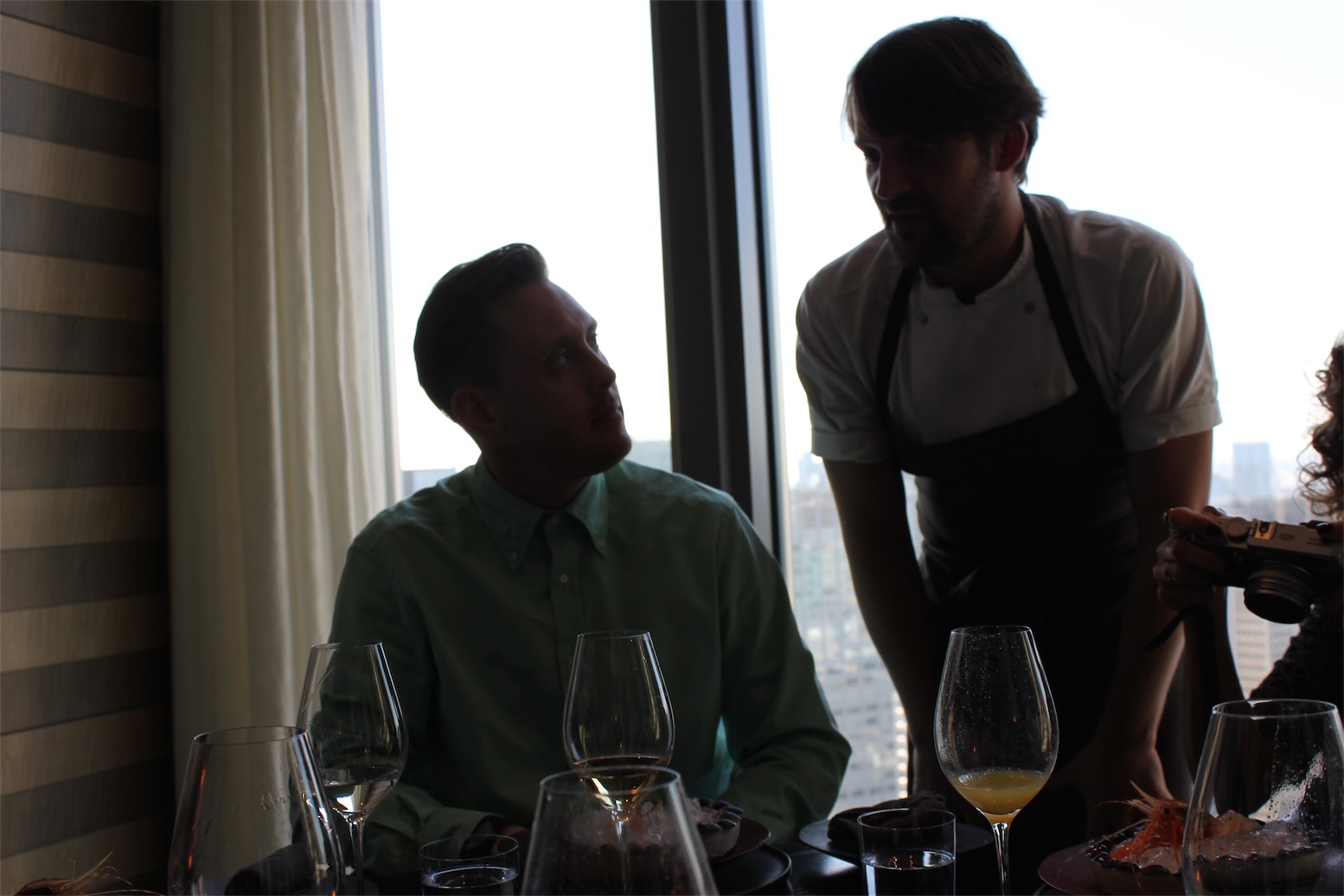 The pop up’s announcement saw unheralded response and popularity in the culinary world, as it brought together three optimal conditions; a dining scene based on dense Michelin starred quality cuisine, the best natural ingredients in the world available precisely within the right season, and a restaurant that is filled with cooking geniuses. The meal was held in French fine dining restaurant ‘Signature’, atop the Mandarin Oriental in the middle of Chuo, Tokyo. An intimate restaurant that felt more like a sophisticated private kitchen, waiter and chef alike presented dishes to the tables, which had been transformed into a NOMA interior, with a few Japanese touches.

The meal began in typical Noma-tic form, with measured chefs and wait-staff delivering the first of a series of two or three bite courses. With precision we were granted a stunning first course, a bowl of unripe strawberries and sake lees. 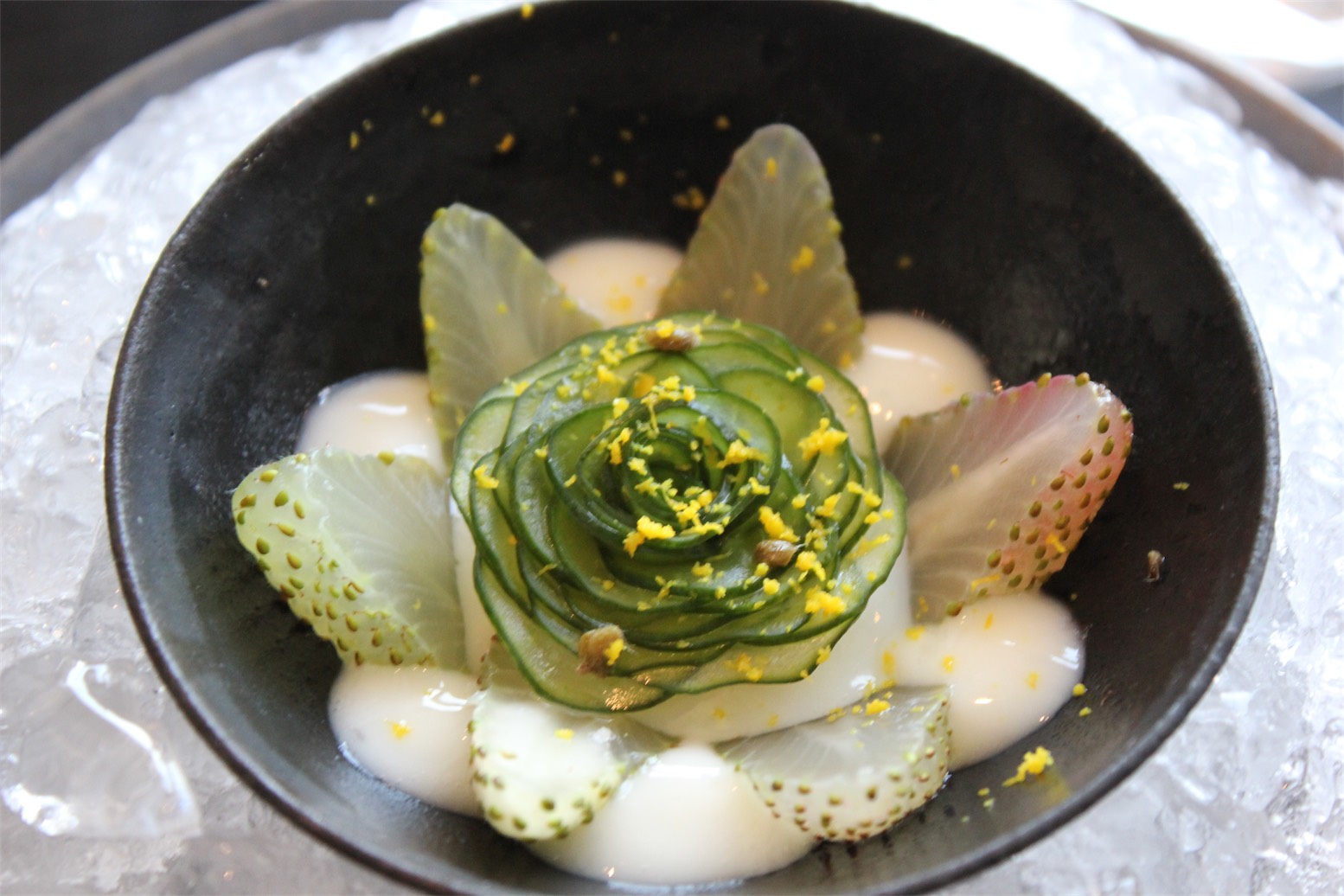 One of the most photographed of the NOMA series, a langoustine that was killed four minutes before it was brought to the table (and so was still wriggling), was accented with flavours of the Nagano forest by way of ants. These ants added a bitter acidity that popped in the mouth. 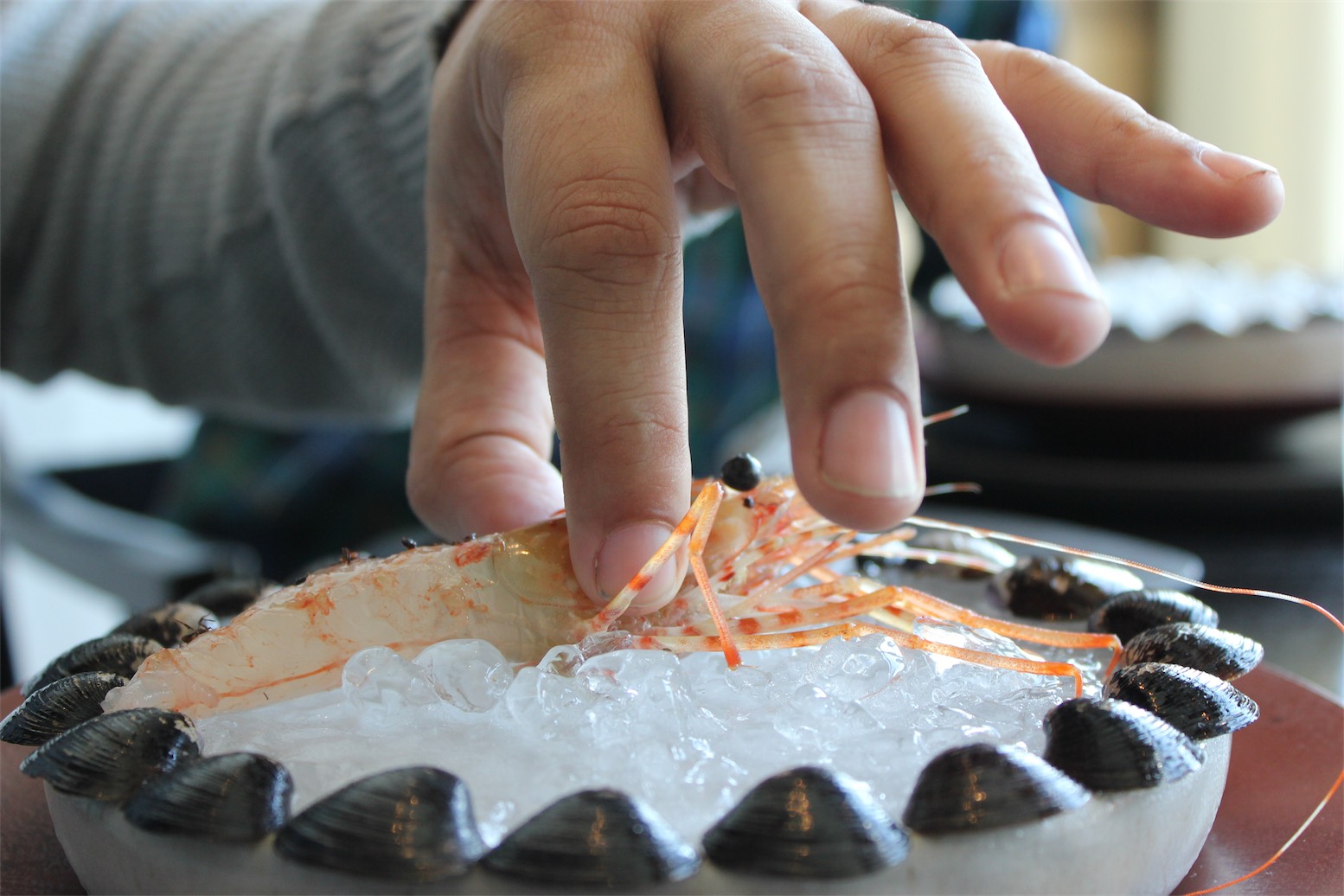 Citrus and long pepper with a sesame oil forever changed the way we look at sesame oil.

Shaved monkfish liver that had been frozen was served on a sourdough crisp (which had a texture we would liken to a tostado) was like foie gras of the sea, and the clever technique of freezing the liver removed trademark bitterness that can often accompany this particular type of liver. 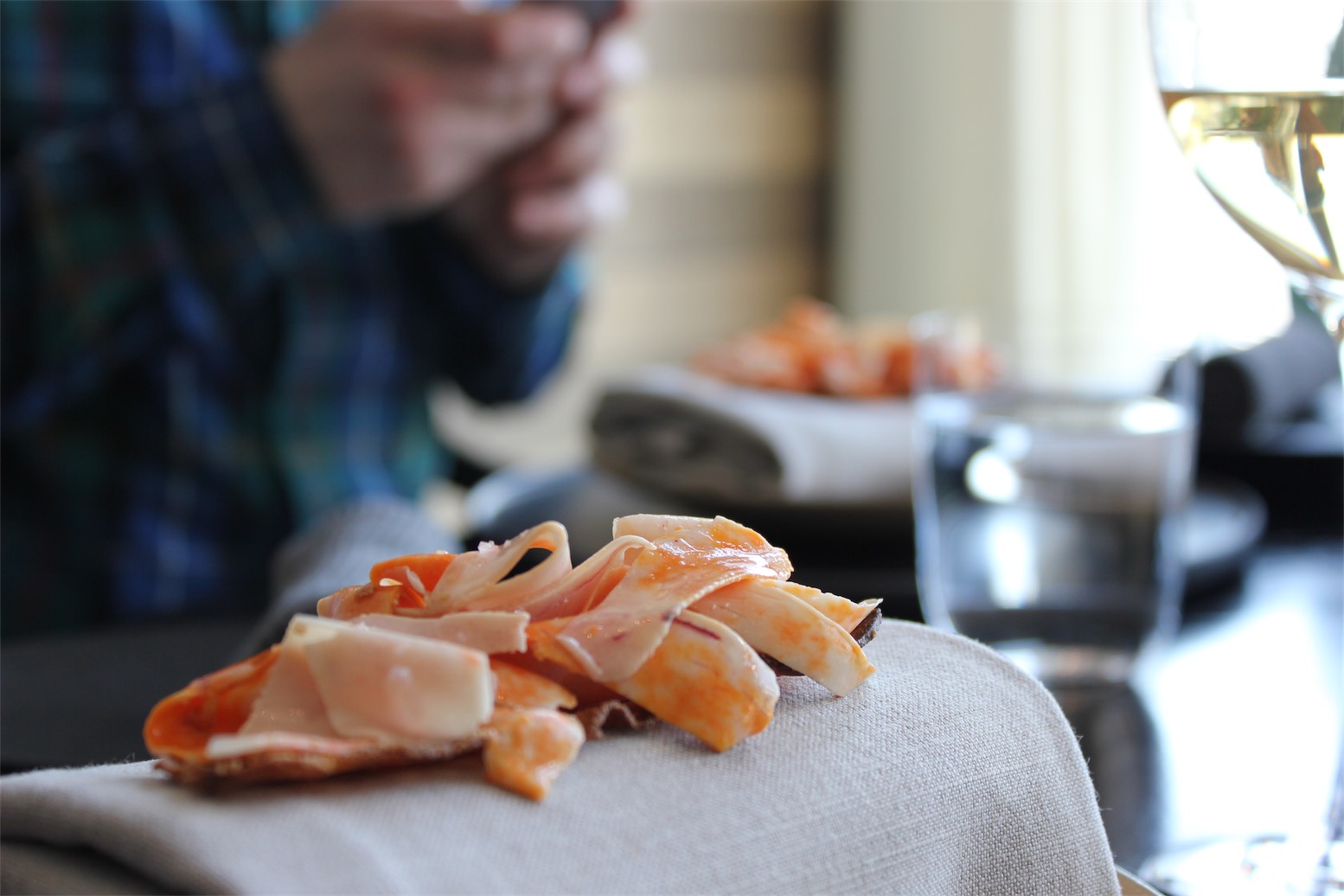 Kaika cuttlefish ‘soba’ noodles were brushed with a sauce made from the trimmings of the cuttlefish, and reminded us of a less creamy abalone liver sauce, popular in Omakase restaurants. A dashi made with kombu and dried pine nettles, rose and rose oil accompanied. 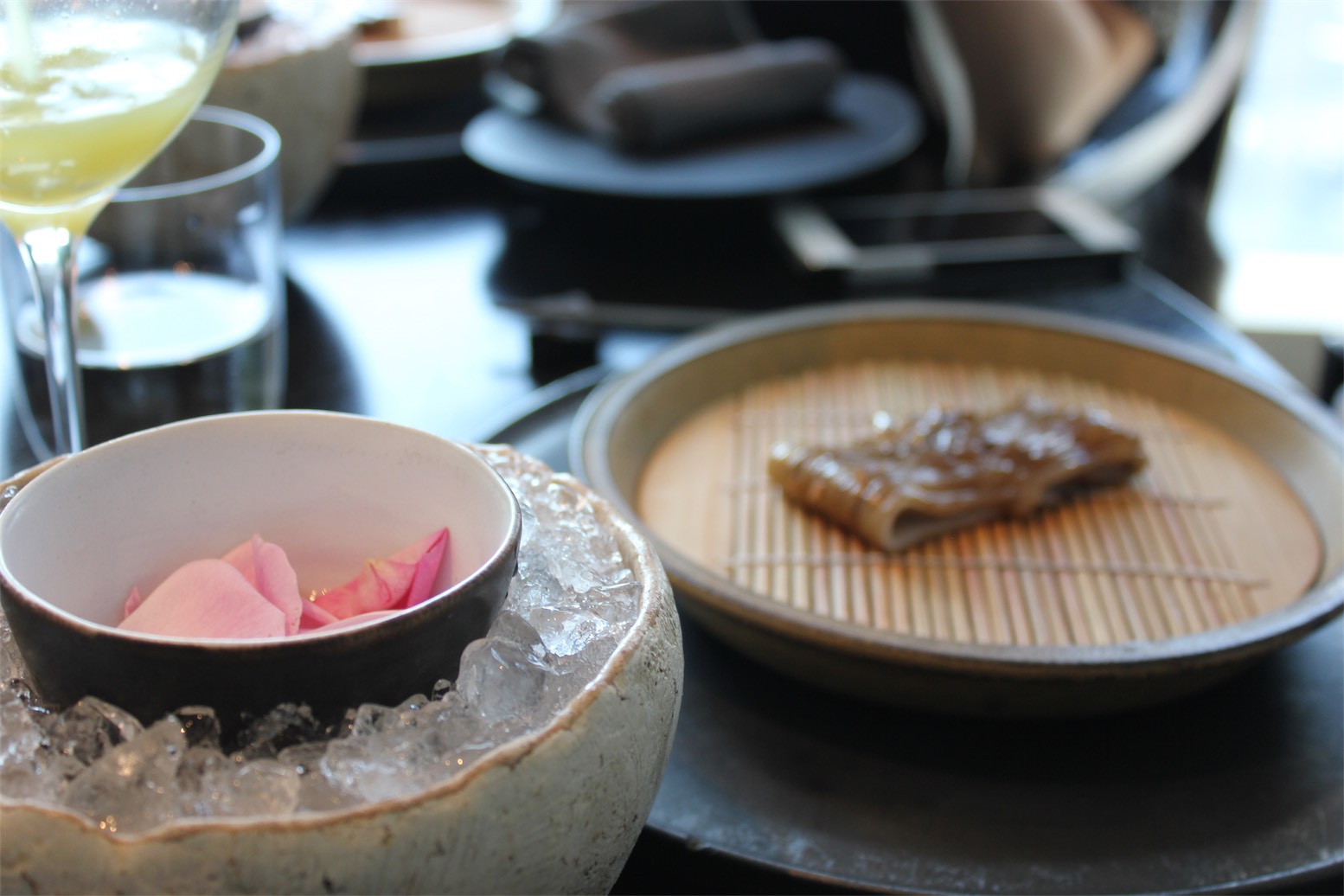 A fresh water clam and wild kiwi tart did things to our mouths we have never, until that point, experienced. An ongoing iodine taste, heightened with time, was felt resonating on our palates that was lent by the wild kiwi. 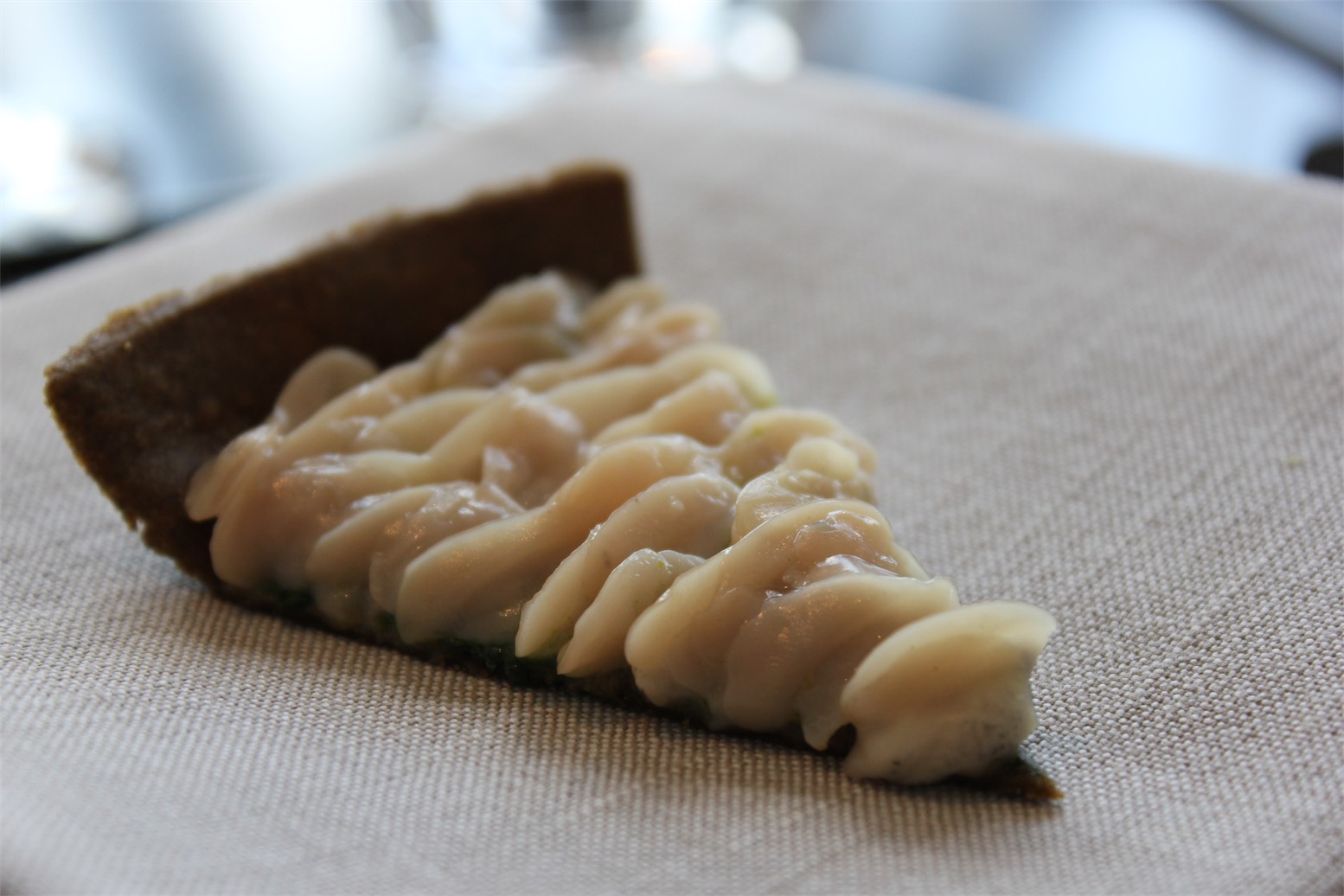 Tofu, just steamed with wild walnuts, gently hovered in the middle of the sweet and savoury realms, and for us was one of our favourite courses. 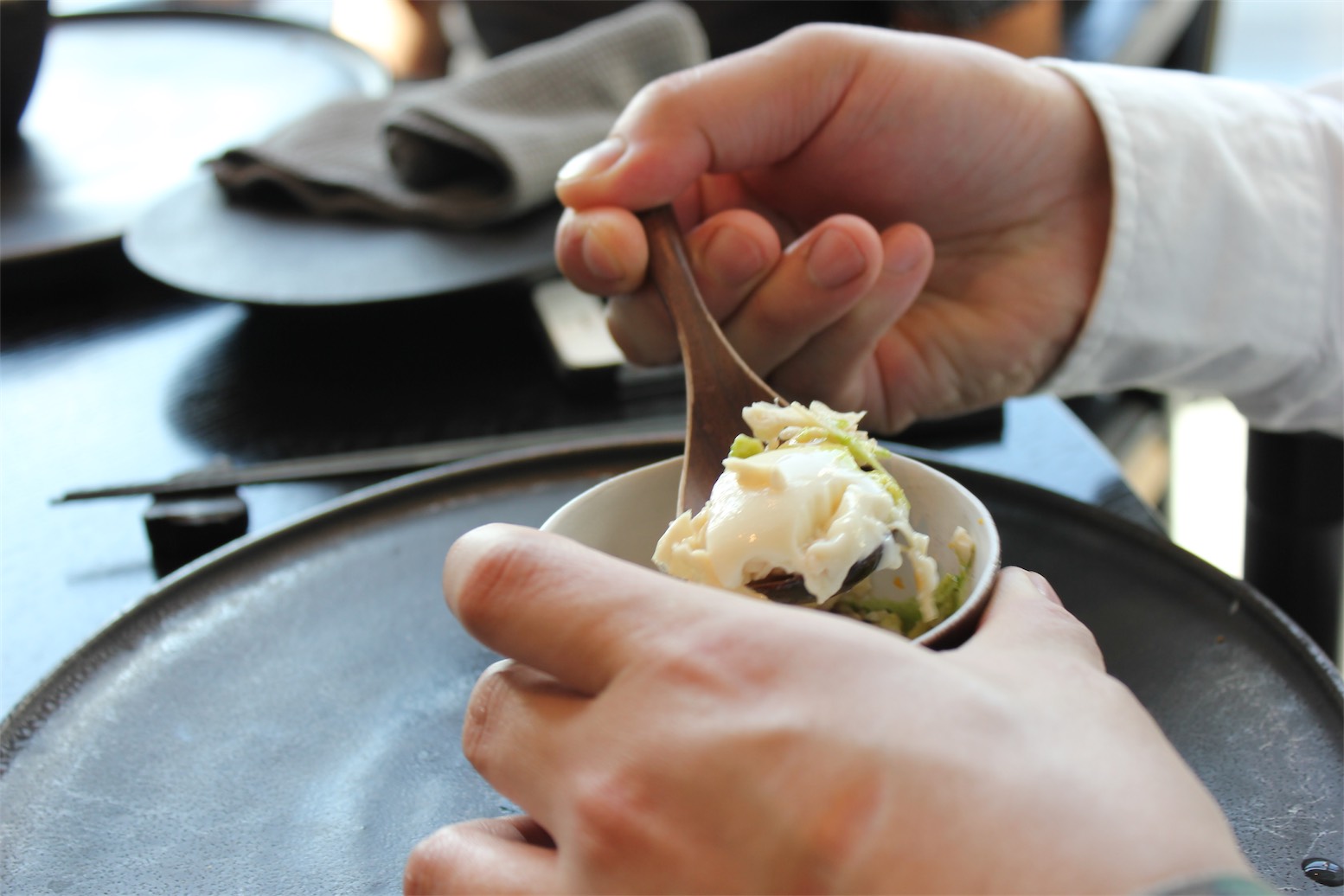 A cabbage leaf, sizeable and cooked only lightly so there was still resistance when bitten through, was plump with fresh sea urchin, and finished with a mushroom water. 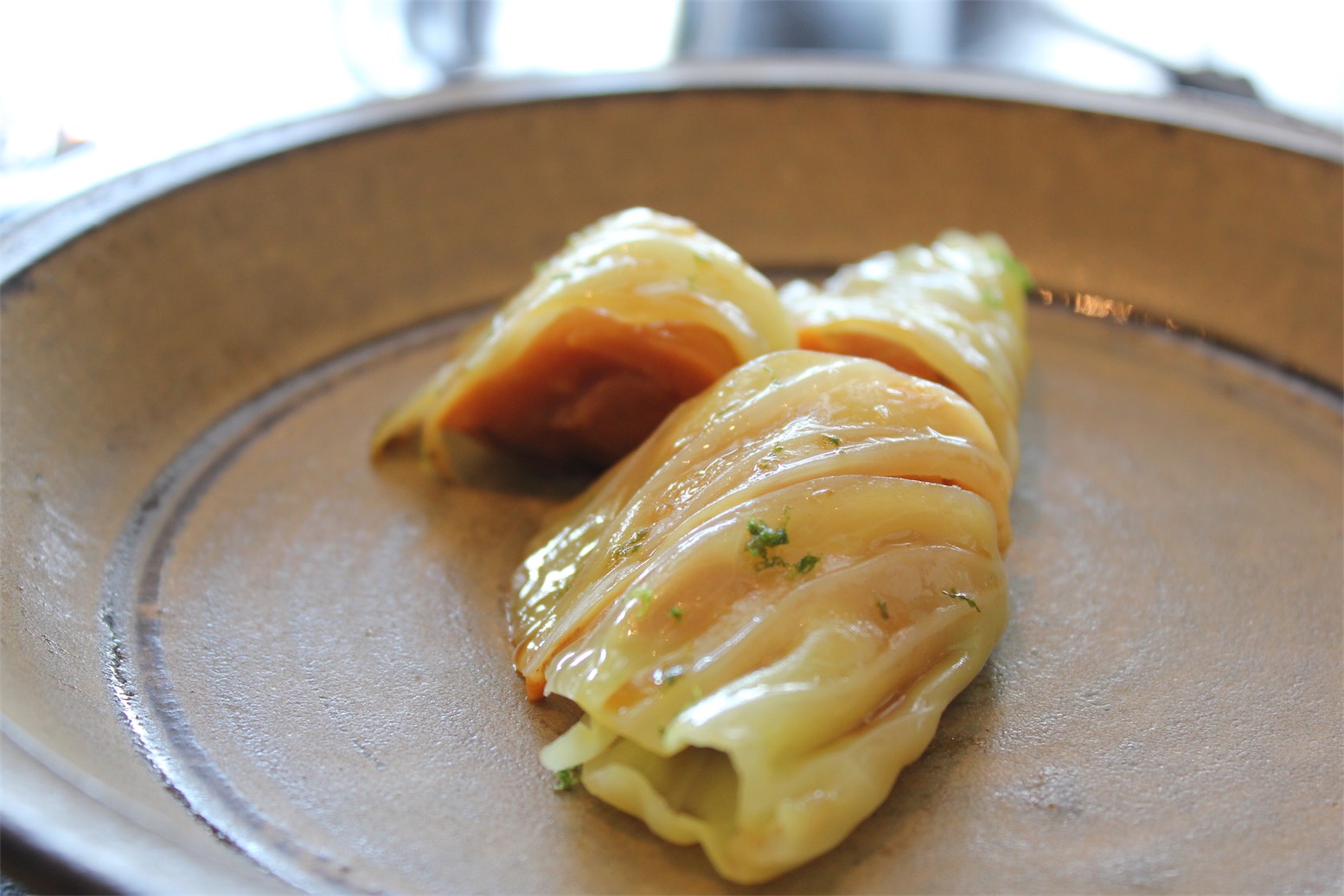 Kelp and beech nuts provided the base for the scallop fudge that was unlike anything we had tasted before. The scallop is dried for two days, caramelised by cooking, blended with butter and thus turned into a scallop fudge. The dense, slightly sweet but overly savoury fudge was then aerated to be this obscure but breath-taking texture that somewhere between cake, fudge, mousse and foam.

Hakkori pumpkin, swimming in a barley water with cherry wood oil and salted cherry blossoms, was another perfect dish. 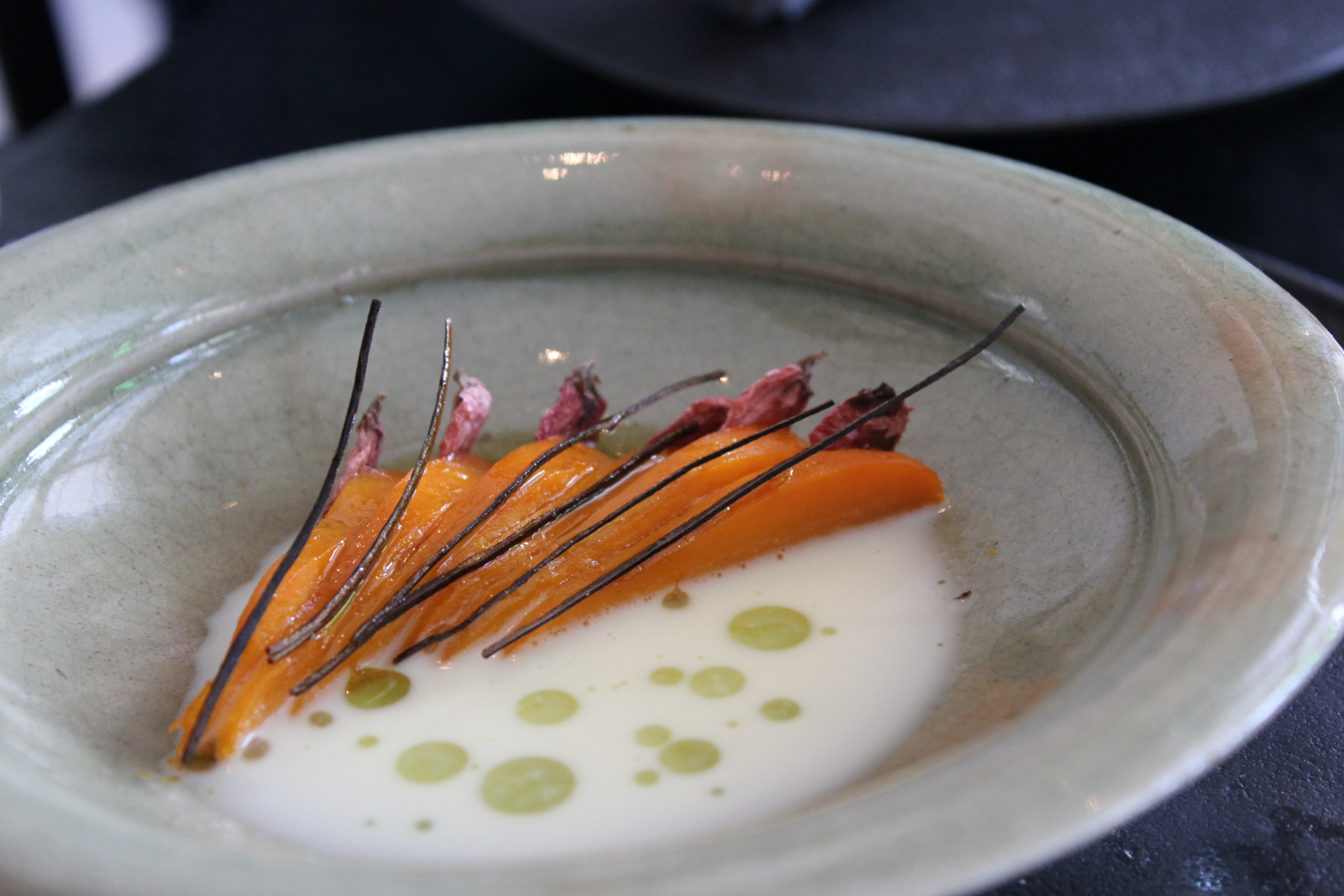 An obscure highlight came in the form of black flowers that diners were invited to reach into the centre of the table to claim, made entirely of black garlic and then brushed with rose water. At the same time as being chewy and savoury, the garlic did at no stage dominate. 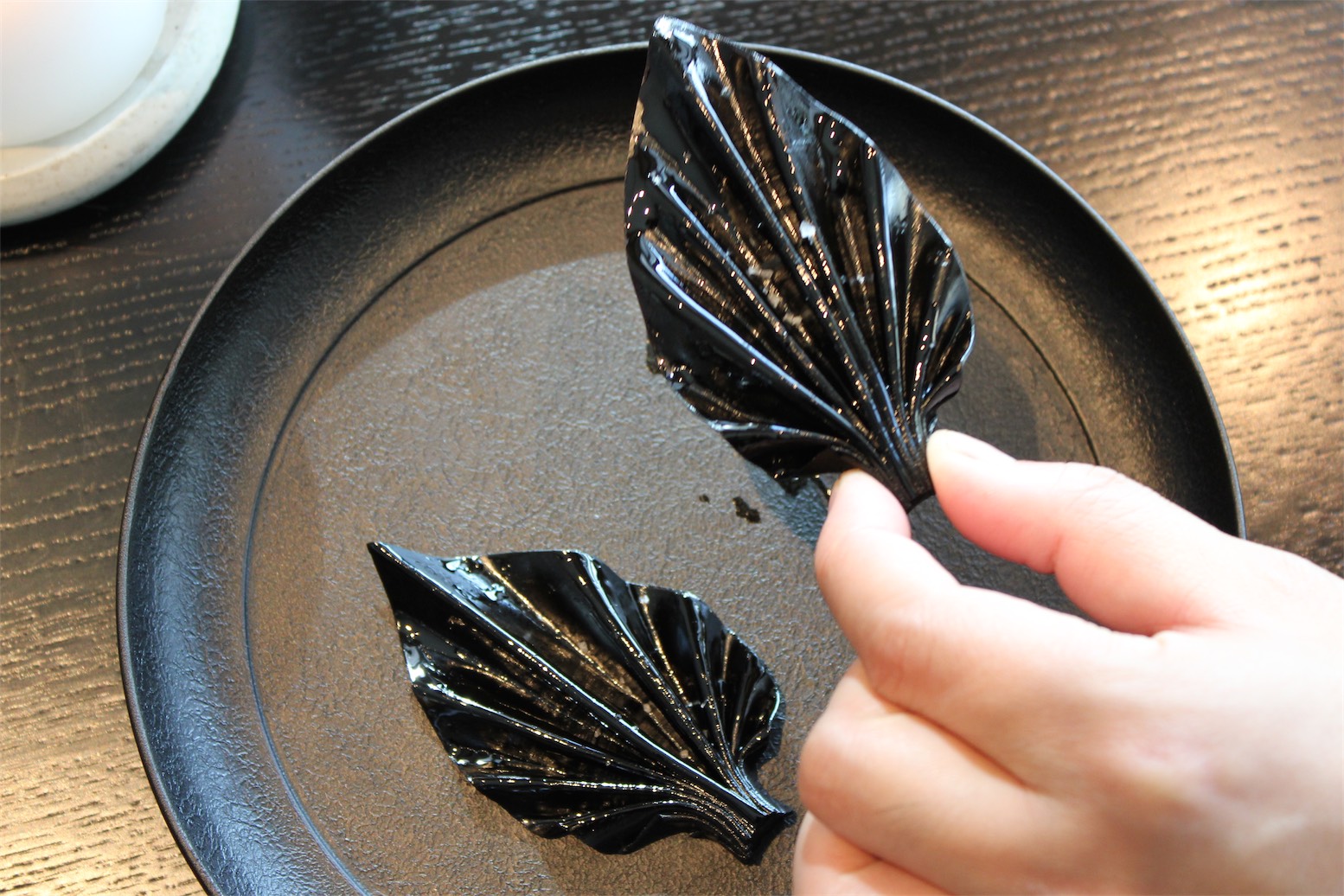 Roots and starches cooked with ginger were another entirely different texture and taste experience, and followed majestically from the chewy garlic petal.

A two week aged wild duck, killed by strangling technique rather than the more abrasive/common bullet, was impressively kept in tact so a whole bird adorned the table like a prized hunting centrepiece. Deliciously tender, cooked to be medium rare with a crispy skin, and cured for four hours before roasting, had a sour matsubusa berry sauce to accompany. 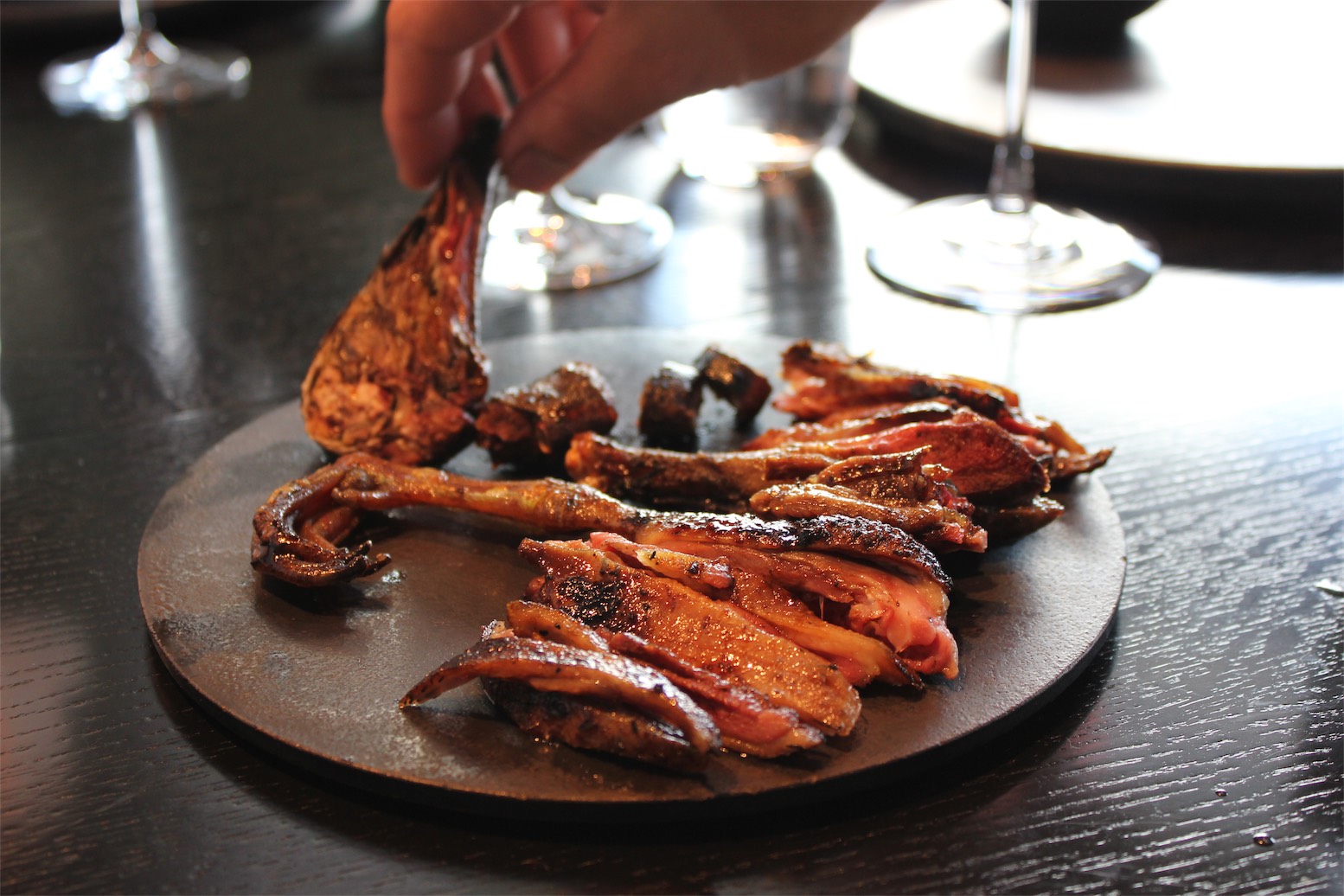 Though we had desire to ‘clean up the carcass’ of the bird, before we reduced ourselves to such savagery, the skillful NOMA team whipped it away for expert preparation.

As we awaited its return, yeast and turnip steamed in a shiitake brick with parsley oil offered a deeply satisfying intermission.

Monsieur duck returned with all the ‘good bits’ delicately seperated, from head to drumsticks. The feet proved particularly tasty. 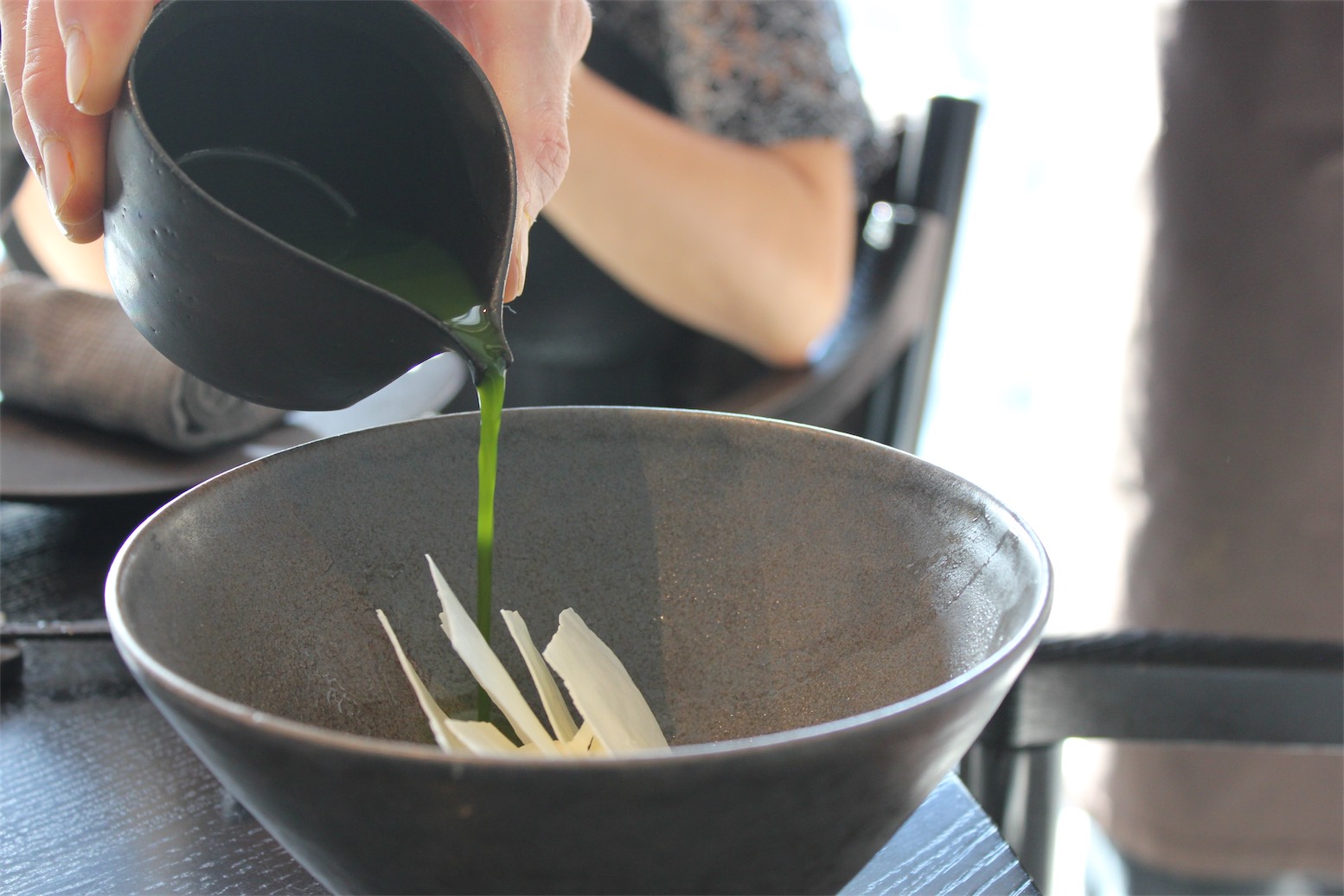 Rice was the simple label given to the first dessert, playing with the concept in Japanese culture of finishing a meal with rice. In NOMA’s interpretation, thin rice crackers punctured sake ice cream, which was perched on sticky rice and wild soil, surrounded by a moat of sorrel juice. 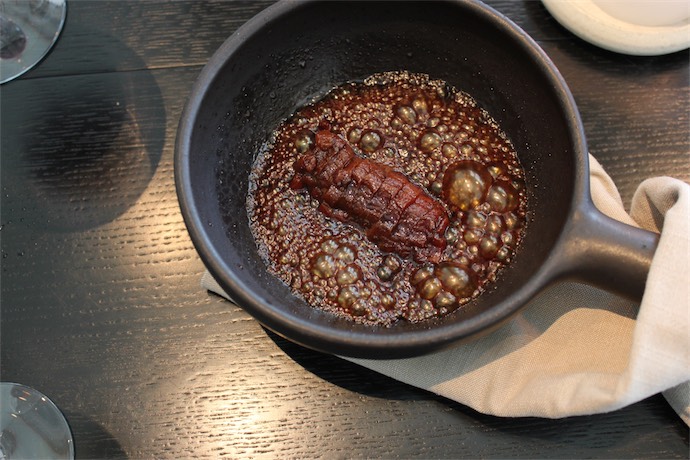 Sweet potato simmered in raw sugar all day finalised the degustation, who constitution felt like a cross between dense tea cake and roasted yam.

Wild cinnamon and a fermented mushroom covered in chocolate were a play on petit fours, with the mushroom replicating the same chewy/sweet/savoury melting pot of flavours and textures we saw in the garlic leaf. The wild cinnamon made for excellent gnawing, whose flavour profile sat somewhere between cinnamon, cassis and pine bark. 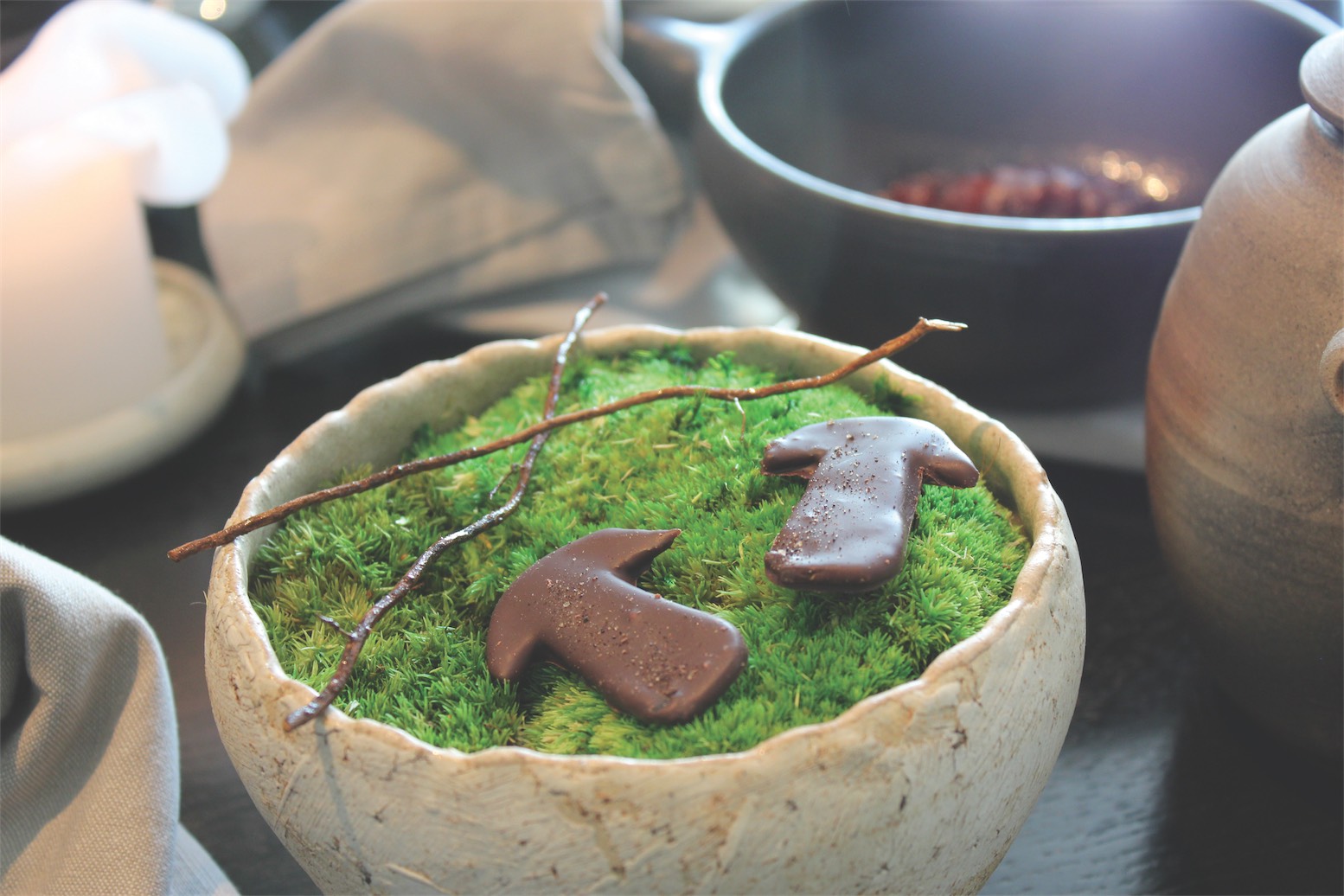 Signature coffee, a floral and aromatic bean from Ethiopia and roasted in Norway, concluded what can only be described as the most innovative, nourishing and mind-blowing banquet we’ve ever had. If this is the future of cooking, then may it only hasten in its arrival.