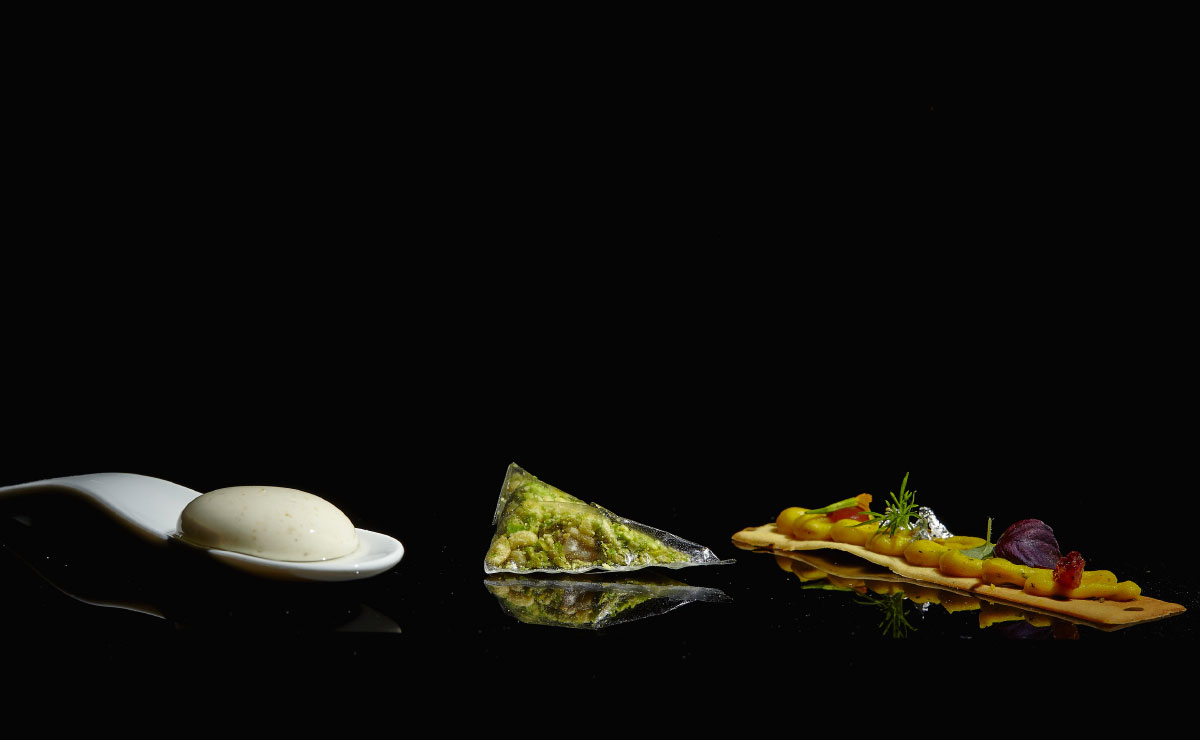 What is most extraordinary about Chef Gaggan’s food is his capacity to perfectly capture the flavours of India, particularly street food found in Kolkata and Bombay, in a contemporary and technically exquisite manner, much like taking a photograph by medium of his dishes. 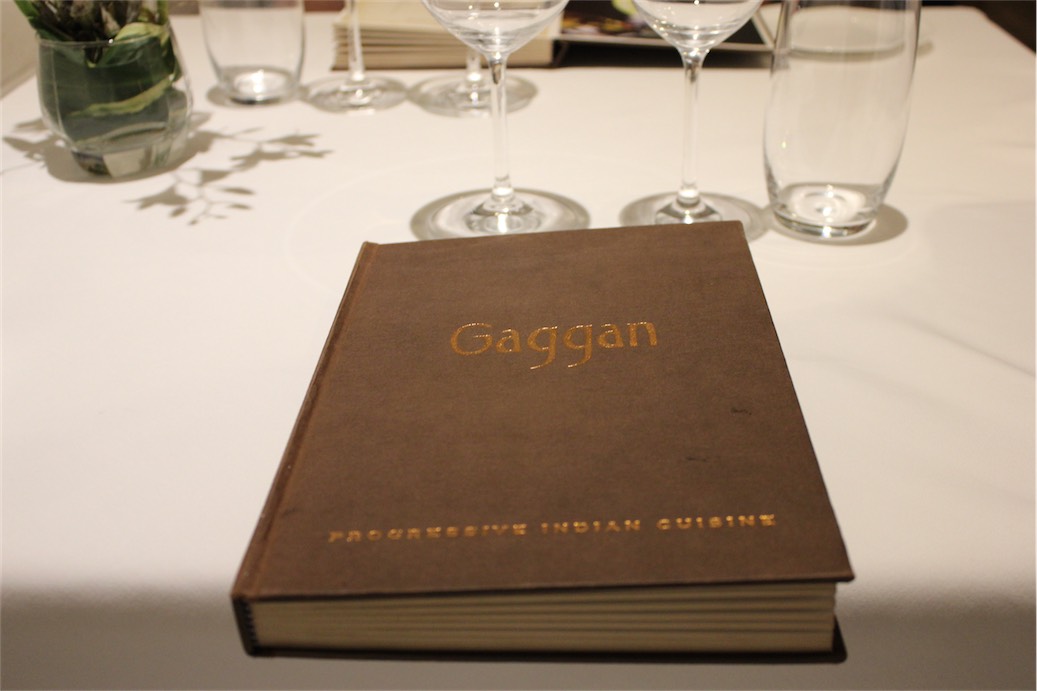 Yoghurt explosion, spurred on by the use of chaat masala, tastes, looks and smells like egg. Bengali mustard and noori show up in what is described as a ‘pakoda’ but has the consistency of a rice flour biscuit, and crumbles into glorious enigma when it enters the mouth. 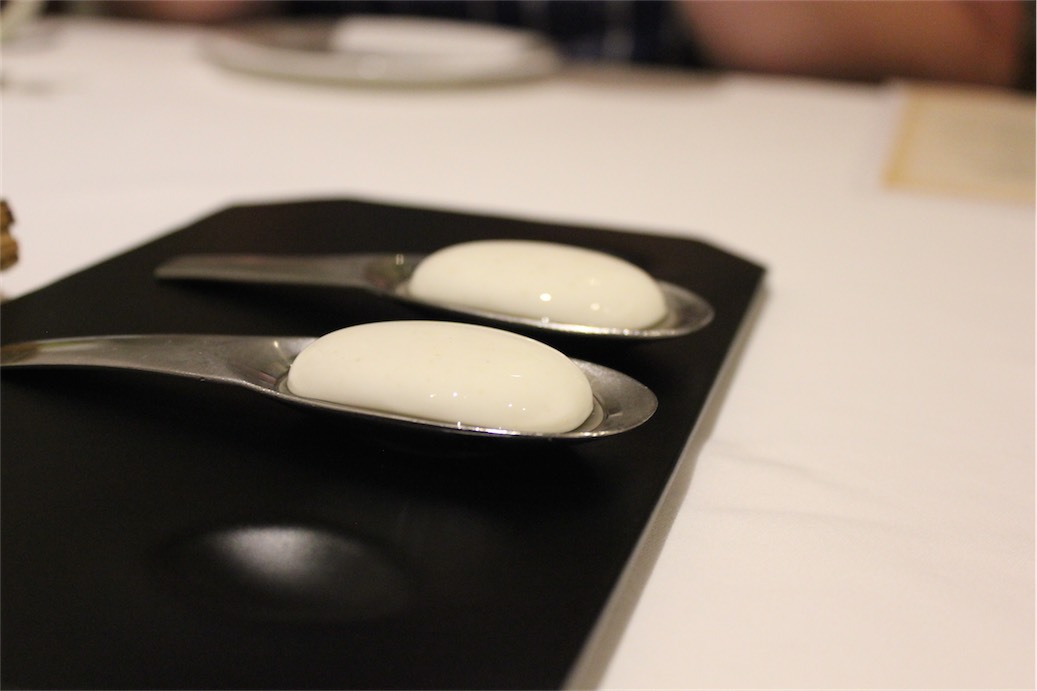 A white chocolate orb cleverly disguises a pani puri water (liquid flavoured with the sweet spicy symphony of chilli, tamarind and chaat masala among many others) and then is topped with a signature sheaf of silver as many Indian desserts carry. Spiced nuts and wasabi peas are contained in a plastic that is edible, and if all that were not enough, the cocktails are shrouded in liquid nitrogen and utilise essential oils. It’s almost too much to handle, and we haven’t yet progressed past the amuse bouche. 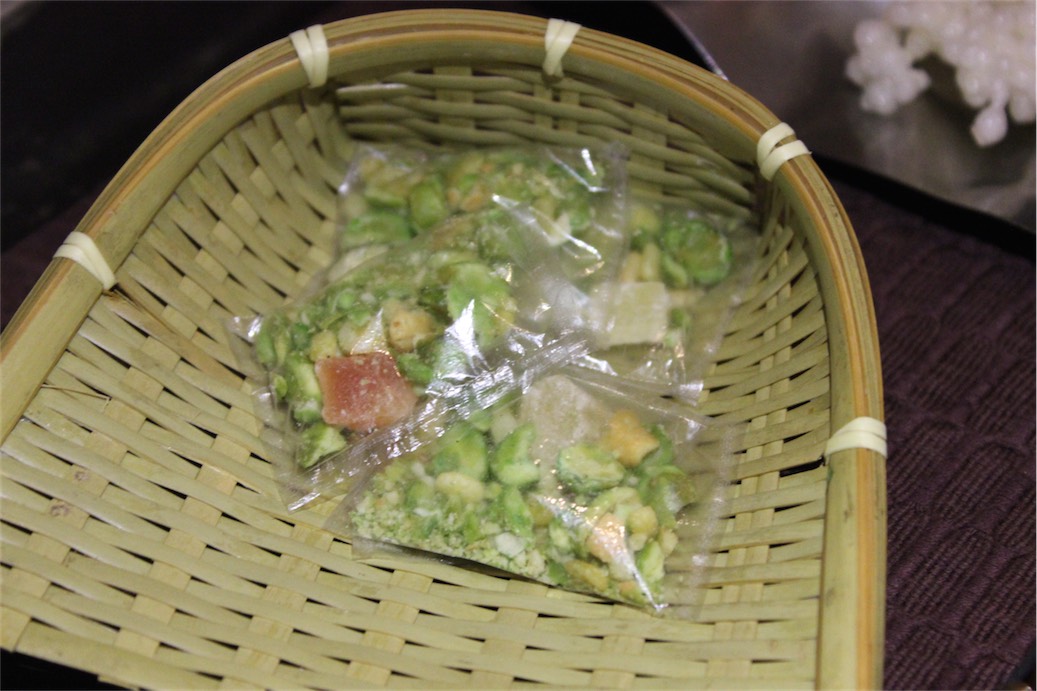 Say Cheese is a hot souffle of 4 cheeses (that tastes predominantly of pecorino and a Roquefort-esque blue), with a tomato chutney and green chilli oil. This was a tad heavy so early on in the meal, and felt far more France than India, but still hummed with a subtle spice lent from the oil and tomato chutney layer at base.

Sandwich is a foie gras mousse on an onion water ‘baguette’ that chef convinces us is made literally with onion and water only. How this is achieved we’ve no idea, but the vegetarian alternative of a crispy puri with potato baji and chutney in a syringe was equally as, if not more, tasty. 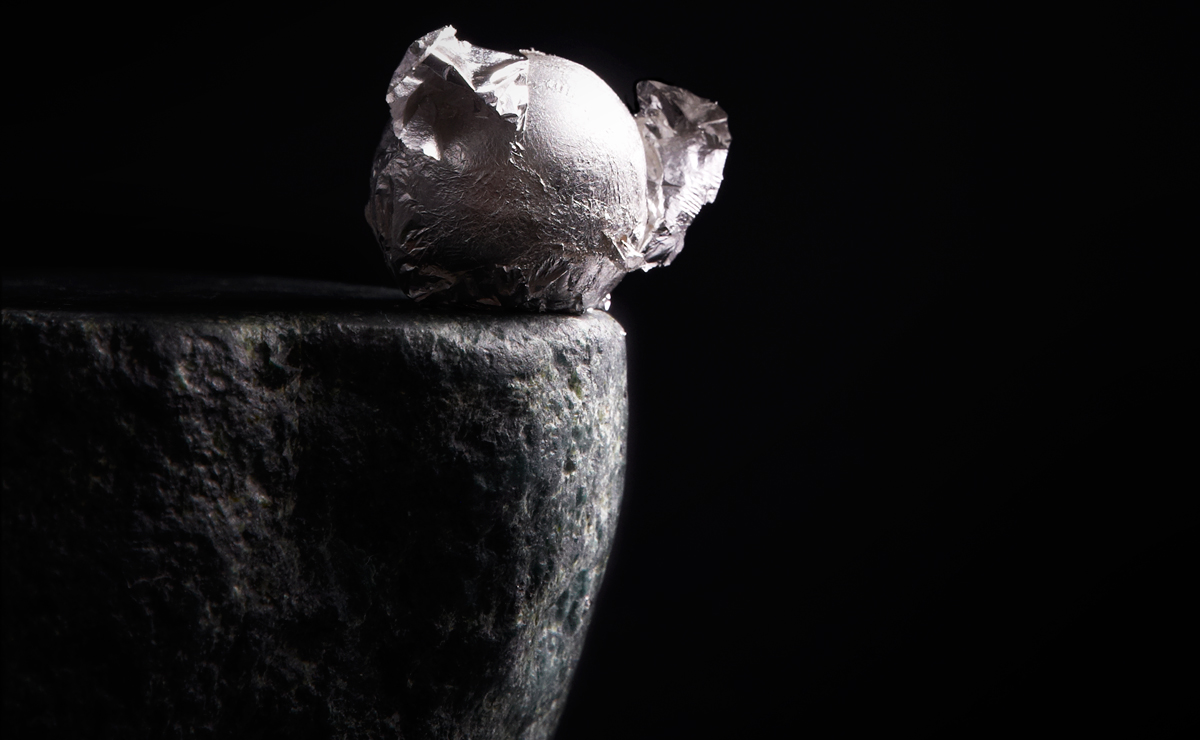 Down to Earth is a surreptitious ordeal whereby a 62 degree cooked egg yolk finds its way to the table in an earthen, nay, stone vessel, which is dramatically lifted to reveal an ebullient truffle and chilli air that shrouds asparagus, morels and artichokes made liquid.

Charcoal, an ambiguous title with no given explanation, is a scrumptious seabass ground with chilli garlic ginger and then cooked in bamboo, topped with onion powder, to form a fishy kofta. The vegetarian option is a green pea iteration with chilli and coriander and is so moist that we nearly mistook it for chicken. Both these tasted like India. 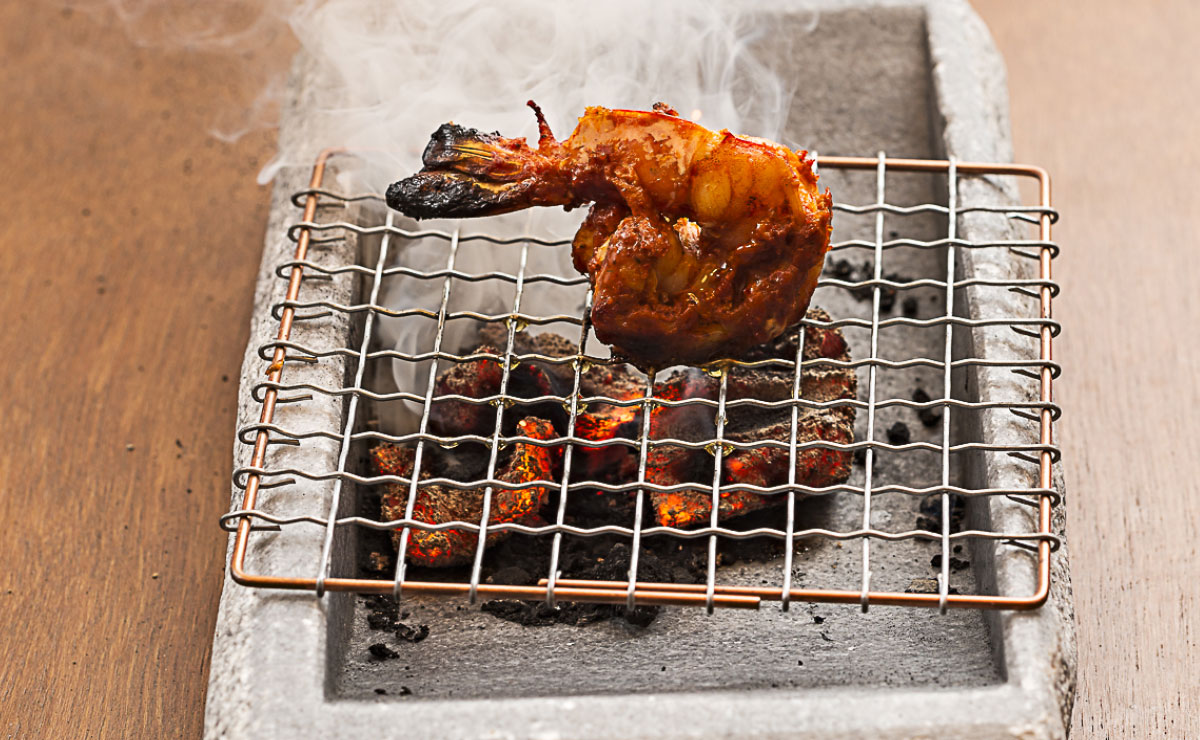 Fresh river prawns grilled in a tandoor with Jack Daniels oak and a curry leaf infusion was satisfying yet was not quite as outstanding as the predecessors.

Angry Bird, a slow cooked country thai chicken was a glorified Chettinad style curry which was most justifiably glorious. It was one of the best curries we have tasted, and although simple, reminds the world why it loves curry the planet over. 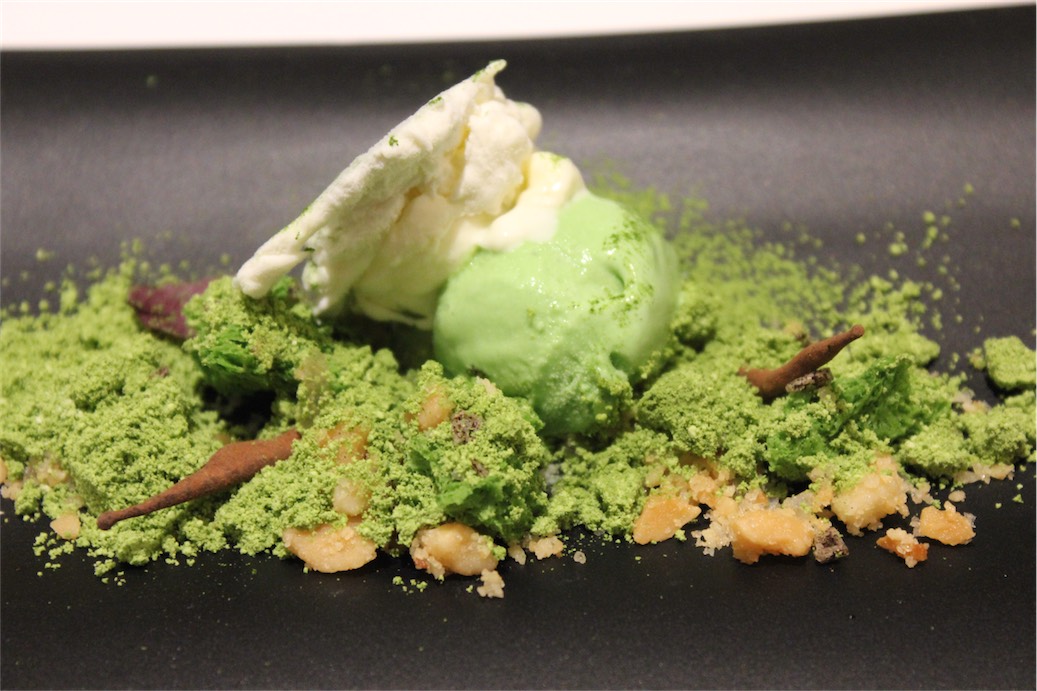 Both desserts were fantastic, though without Indian influence. The first, a Japanese themed dish with matcha tea cake that had been perfectly siphoned then aerated was served nestled in a bed of marscapone cream, vanilla salt, shiso leaves,  macadamias and fresh wasabi, was an outstanding dessert and one of the best we’ve ever had. Dessert often disappoints, even in the finest of dining. This was the opposite of disappointing. 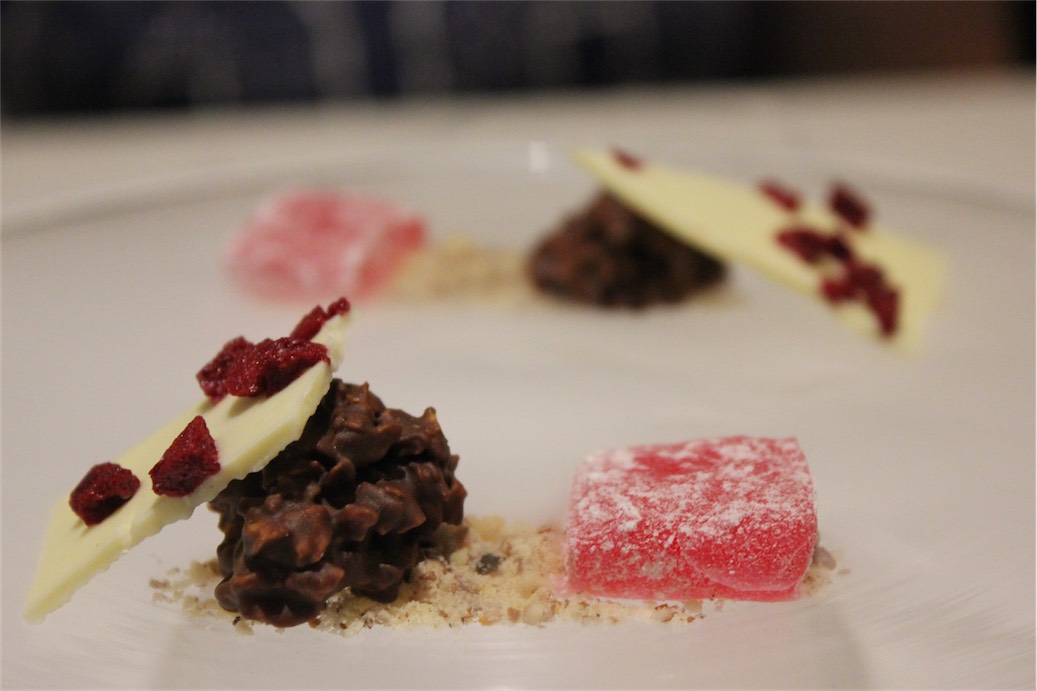 A Gaggan take on a magnum replete with popping candy was outdone by the petit fours, which consisted on another-worldy Turkish delight resembling no middle eastern rose we have had before,  and some salty tart cranberries on white chocolate.

Gaggan’s central progressive philosophy, advocation of new take on an ancient flavours, and understanding of cookery has mean taking a cuisine which although wildly popular, can at times be mired in sweetness, oil, excessive ghee and too much batter, and turning it into literal masterpieces. Liquid nitrogen aside, the food at Gaggan is the stuff of legend. 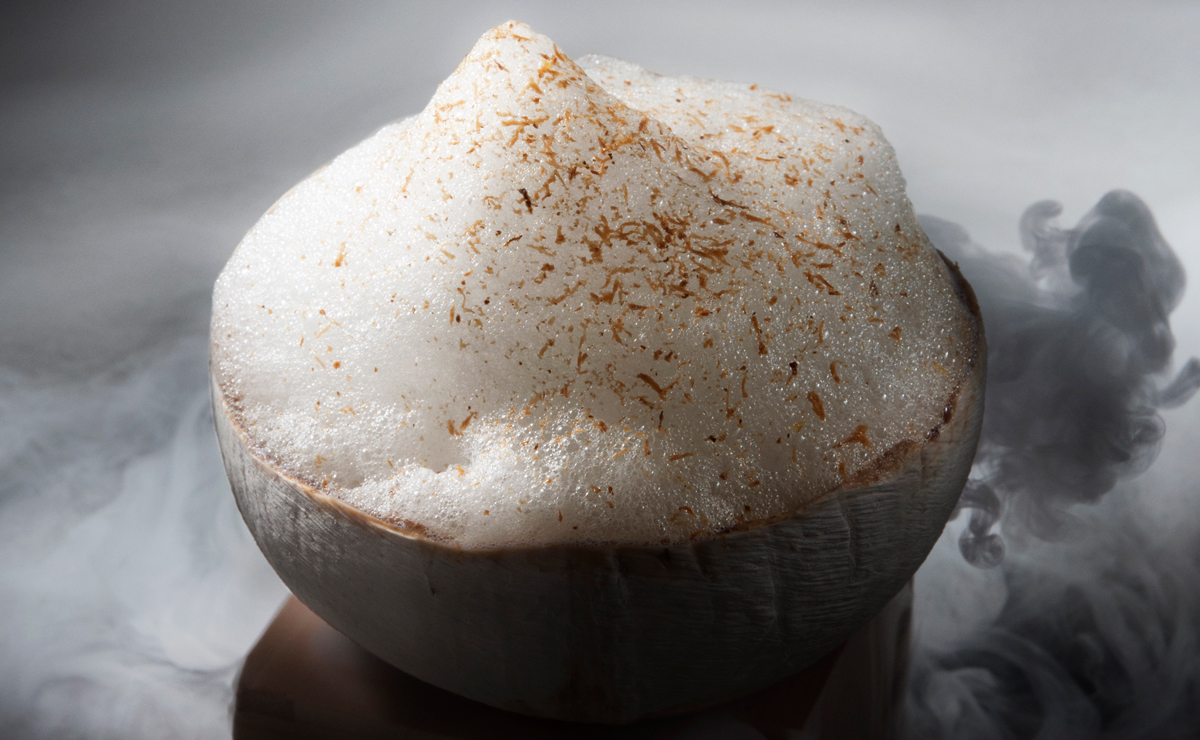