Restaurant Olo in Helsinki is a summary of Finland through food

I didn't know too much about Finland. Norway was the land of breathtaking fjords and Sweden seems to make really good music and furniture. The Danish gave us pastries and Copenhagen has seen freakish fame emerge from their foraging restaurants. But I didn't know much about Finland, and even less of Helsinki, aside from the apparent noteworthy architecture. 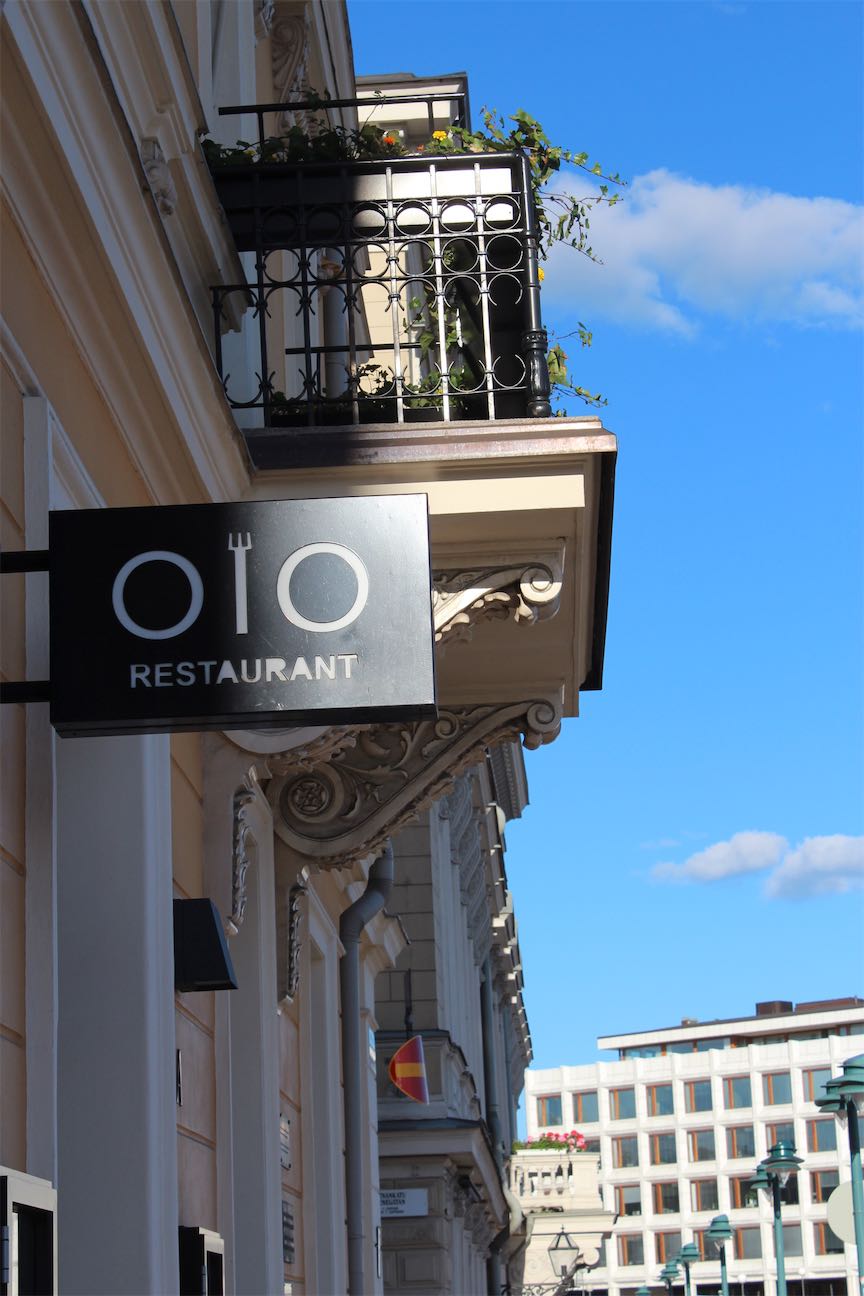 Restaurant Olo, or Olo-Ravintola in Finnish, is one Michelin-starred and situated right on the water's edge in the South Harbour of Helsinki. When I ate here over the summer, it was as though the whole region had been made into a menu summary, providing a comprehensive tour of Nordic culture.

At any point in time the menu can differ significantly depending on season and supply. When I was there, a few standout ingredients were seabuckthorn berries from Merimasku, Finnish vendace, Swiss chard from Långötorp, wild strawberry from Punkaharju and Malmgård farm's organic emmer and rye. 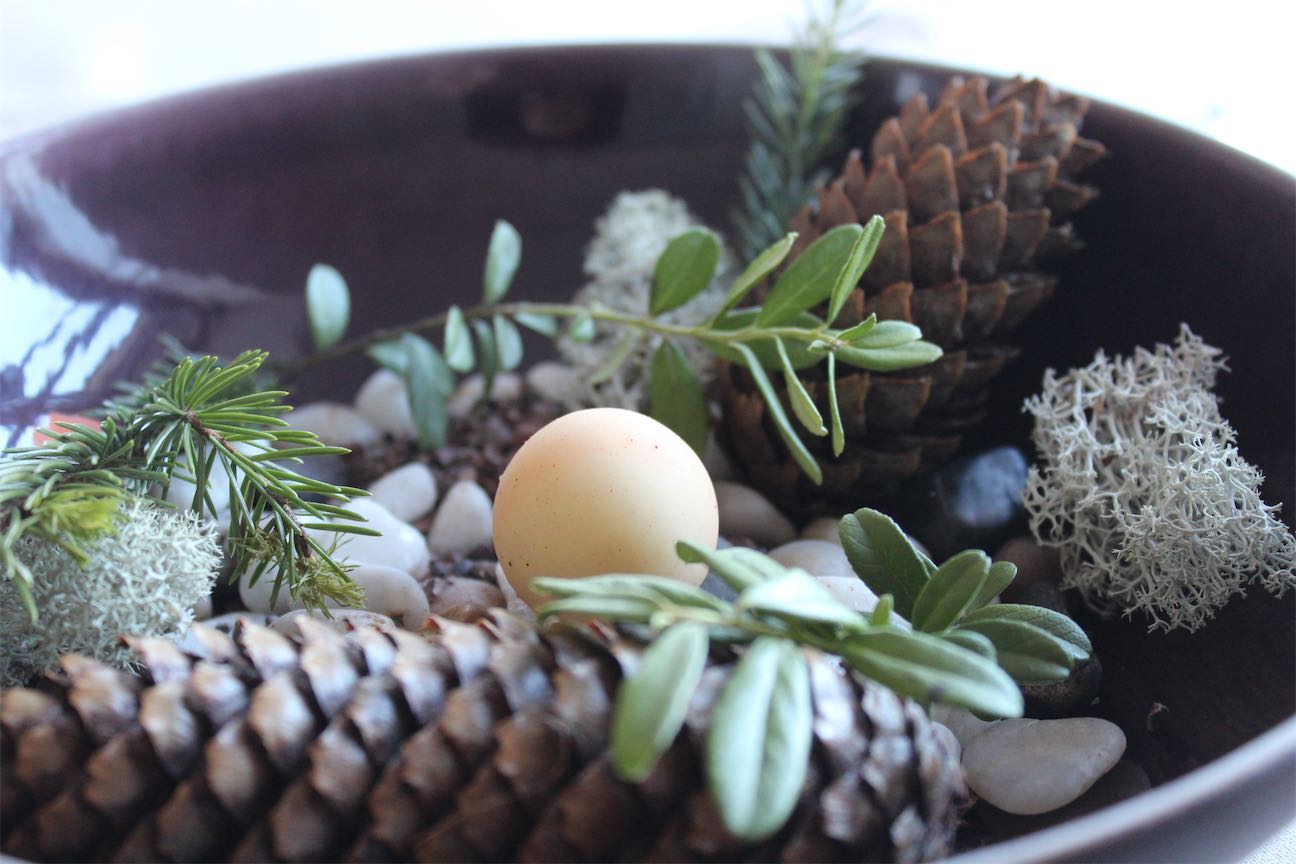 Unpasteurised cow's milk yoghurt with seabuckthorn berries shows up a sphere first, exploding in the mouth as the dairy coats the tastebuds. Good start. It is like eating a gastronomic Rafaello, nestled amongst pine cones/needles, pebbles and moss. It's perfectly balanced with just the slightest edge of salt. 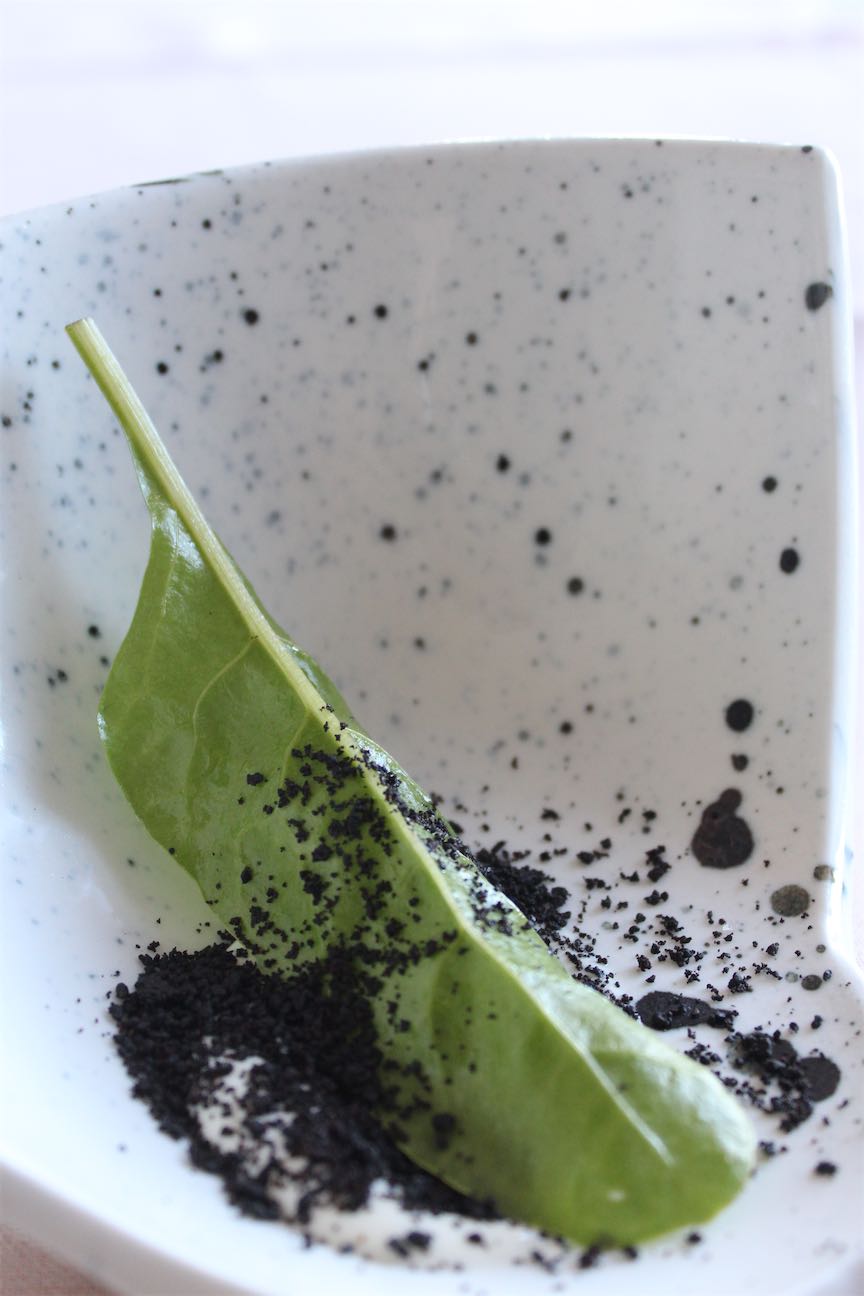 Swiss chard, Saloniemi goat's cheese and octopus-ink stained beetroot and almond soil became one of the best starters I've had. The gentle chard with salty crumble and the mellow goat's cheese is simple and modest, eaten with the hands. 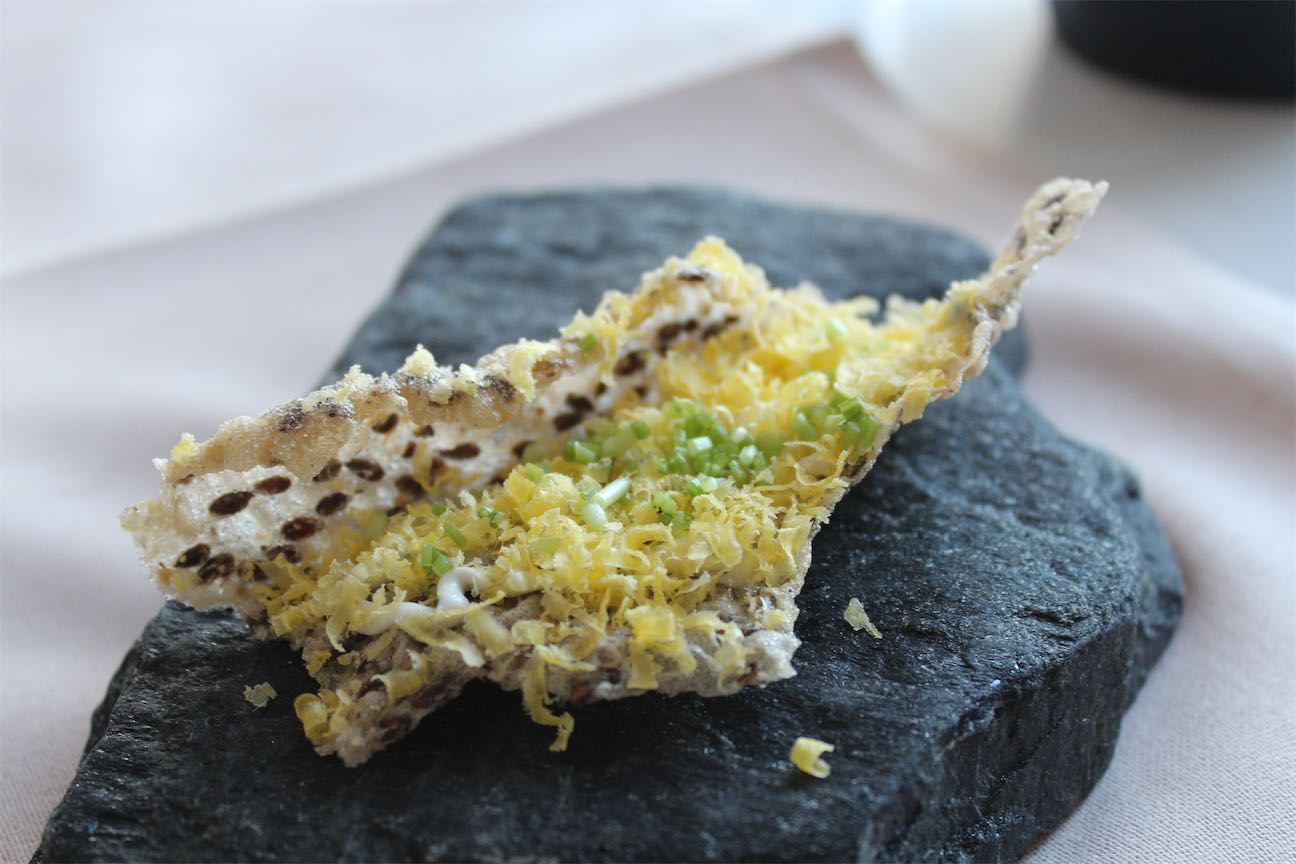 A fermented rye cracker with linseeds, lemon flavoured sour cream, shaved egg yolk and chives was crisp with yolk showcased very cleverly. Served alongside were malt cracker-sticks, a fish not encountered before called "vendace"  (Finnish white fish found in lakes) and samphire, all placed with precision on a slab of rock. 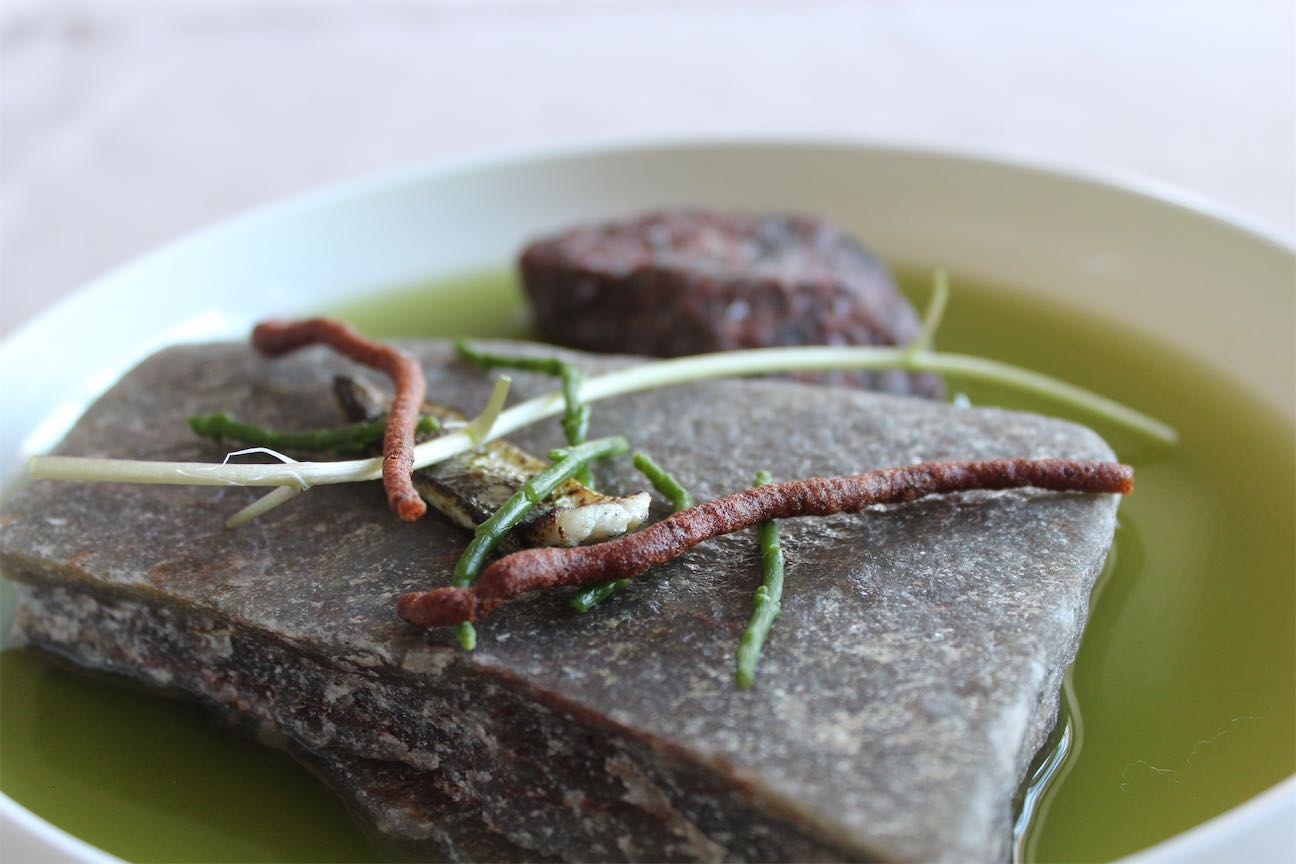 The highlight of this initial precession came with the potato, which was simply a buttery roasted Finnish potato, filled with Swedish cheese and dusted with burnt leek. Evoking memories of the campfire, it's a classic reinvented and the height of simplicity. 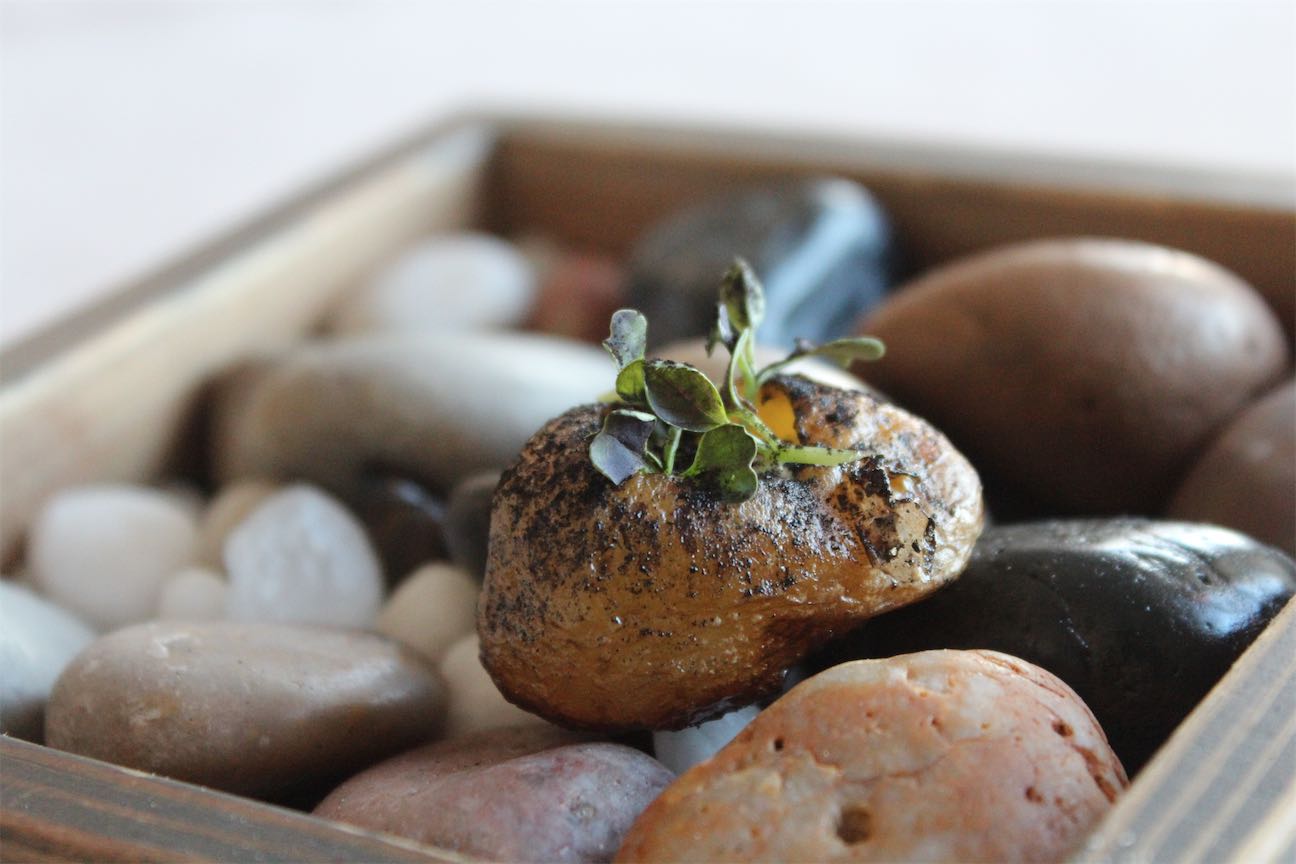 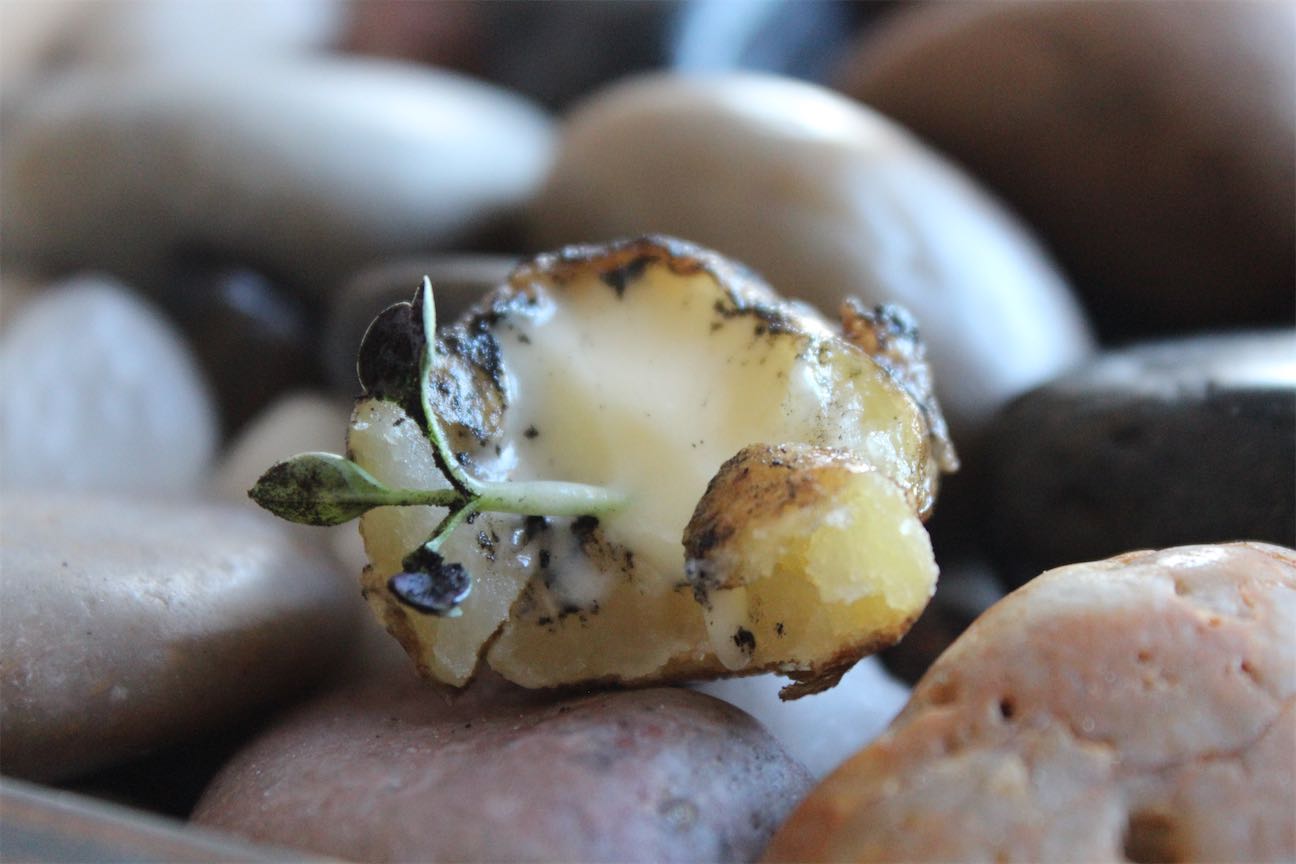 A Finnish Romaine lettuce is filled with and Norwegian king crab and Icelandic seaweed–sweeter and milder than Japanese konbu–and finished with fennel. It is an alchemy where creaminess meeting minerality. 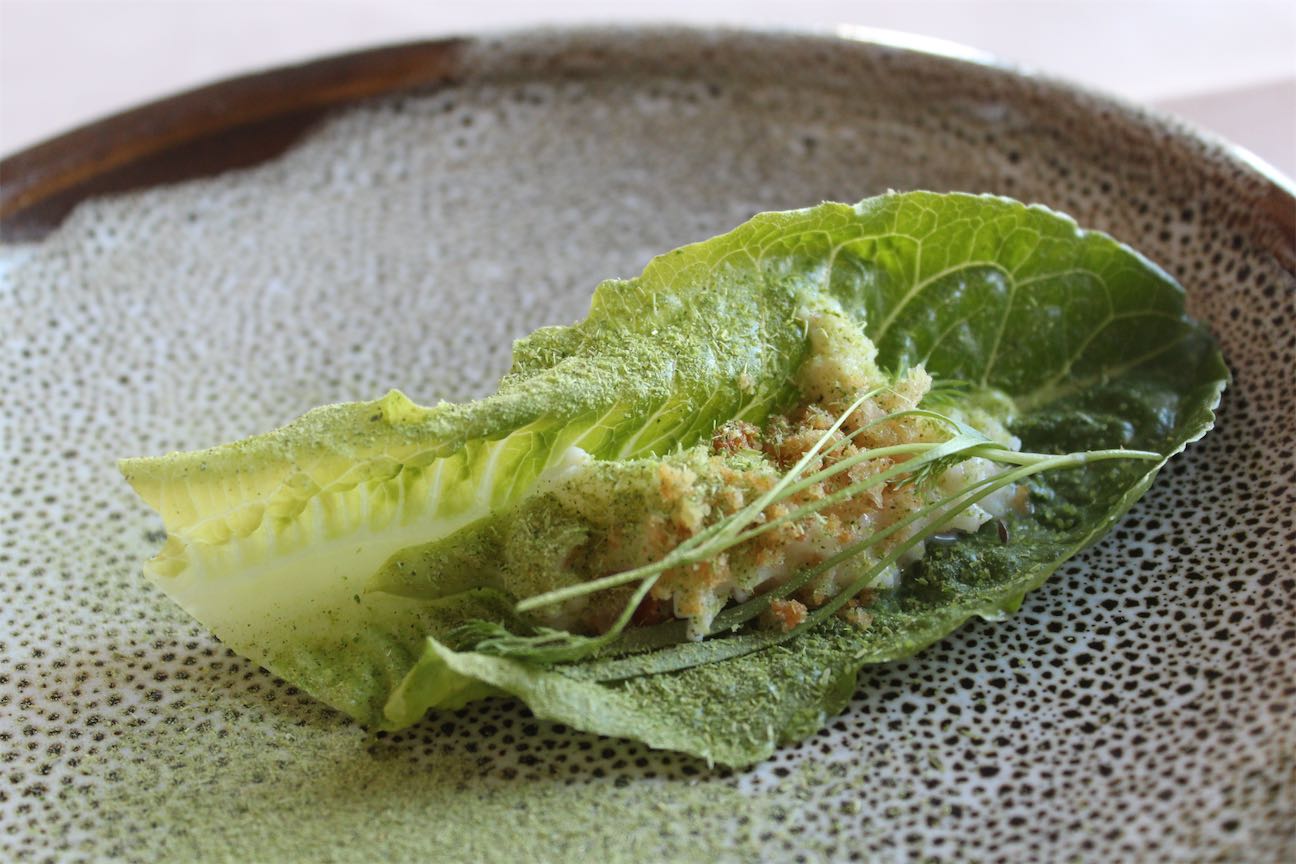 It is worth noting at this point; FOH staff at Olo Ravintola know what they're talking about for the most part. Call them on the seaweed, they'll tell you it's Icelandic. Enquire about water and not only are the origins spoken of, but the four layers of filtration explained which means it doesn't detract from either the wine or the food. Knowledgeable and kind, they're a multicultural cadre of hosts, British, American and Scandinavian accents getting amongst the mix. 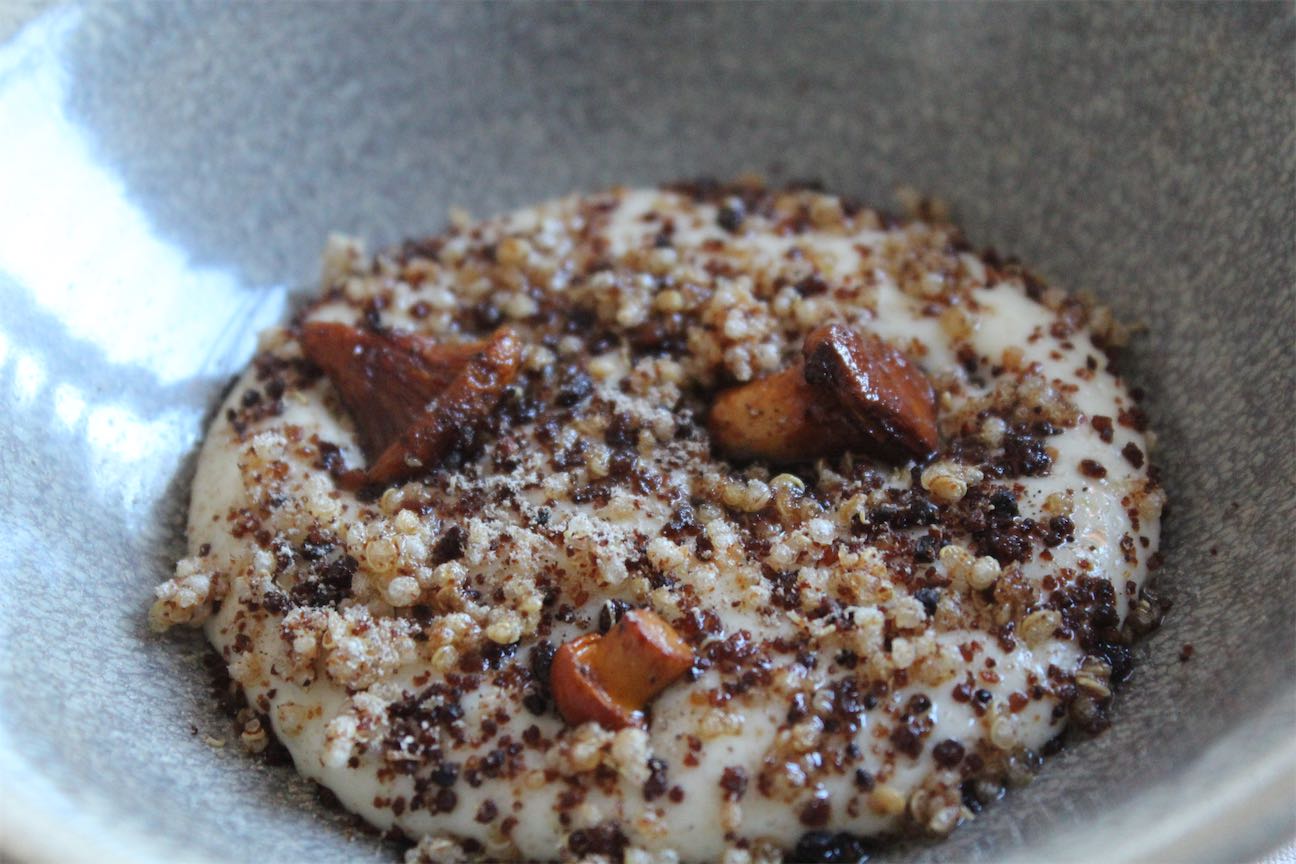 Starting with lively and light Chablis, the first course is a semolina, creamy, smooth and puréed, with a mushroom consommé and puffed quinoa. Malt joins the quinoa garnish and dispersed throughout are chanterelle mushrooms. The semolina has been whipped with cream and the consommé is reduced to be almost a thin gel. It's magic in the mouth and I want to dip my whole head in. The roots of Finnish culture and the links to food resurface, with Chef Jari explaining this dish reminds him of his childhood when his grandmother would serve porridge with sliced rye. Porridge is a quintessential breakfast for Finland. 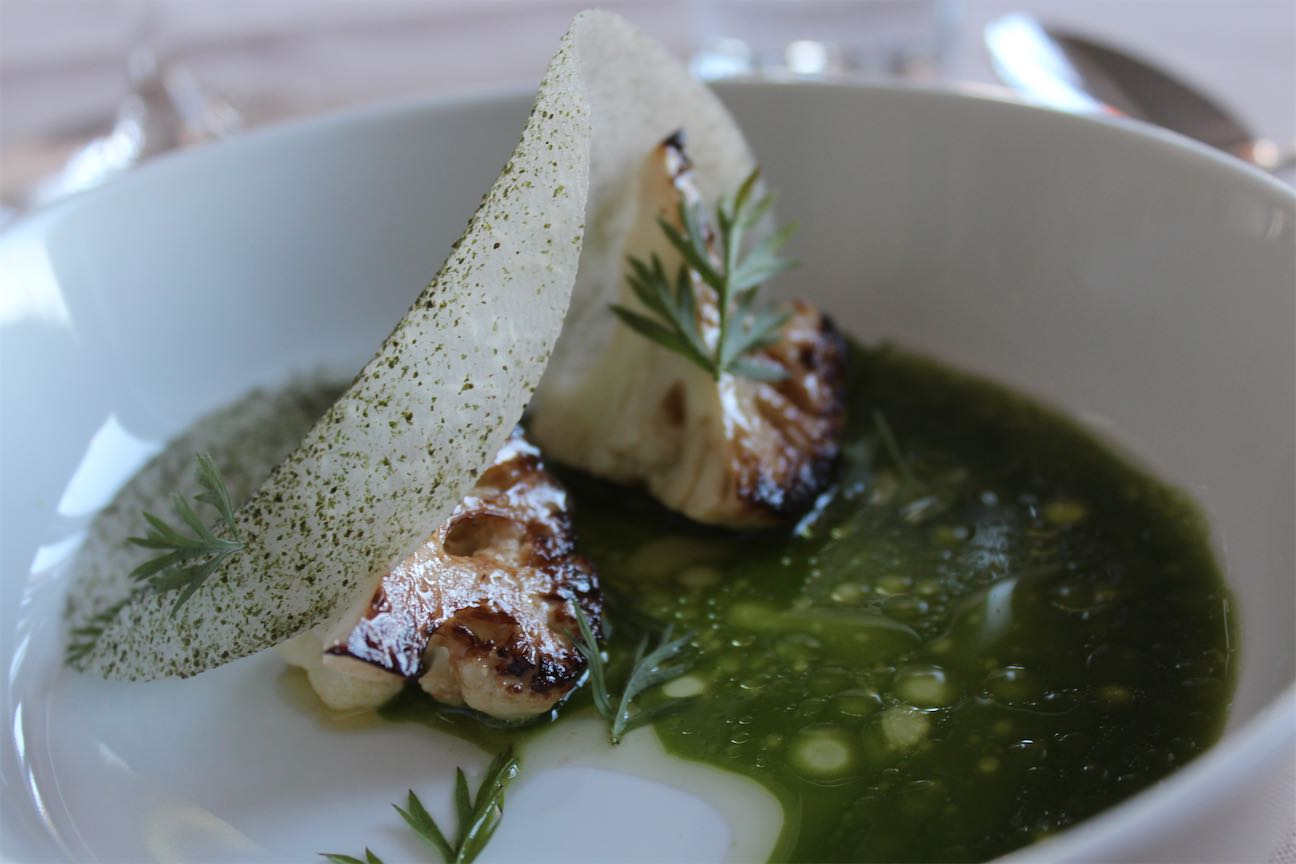 Kohlrabi as never seen before is the star of the next dish, coming as a great sheet, served with spruce oil, Finnish cauliflower purée, seared cauliflower and finished with fresh spruce and spruce oil. Though the cauliflower was a touch too salty, the kohlrabi balanced it all out, giant though it is. Kohlrabi grows larger in this part of the world because of the contrast sunlight that summer provides in Finland. 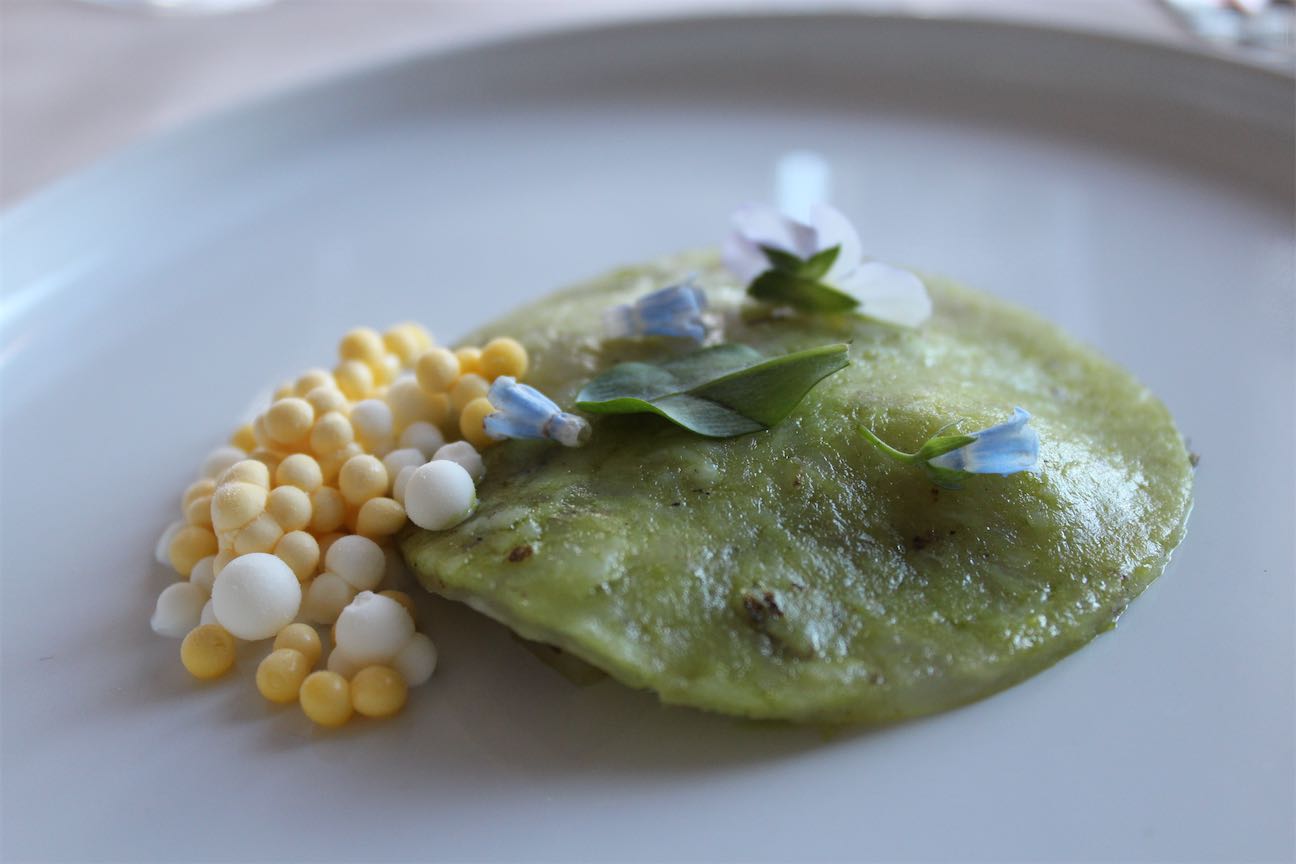 Sugar salted white fish on a bed of cucumber with liquid nitrogen egg yolk and buttermilk orbs is flaccid in all the right ways. The frozen textures played with the soft fish very nicely. 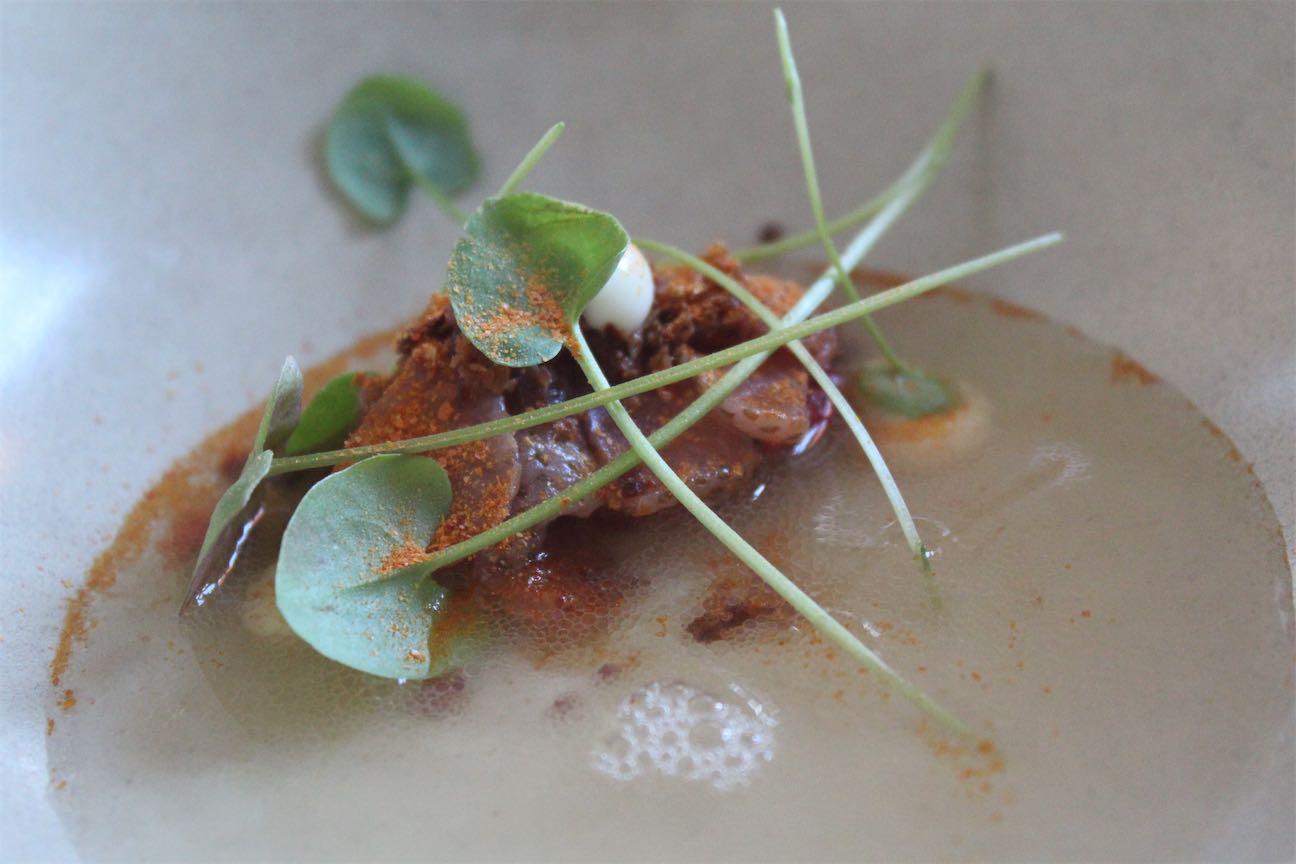 Organic Finnish tomatoes, white strawberries, an emulsion of pork, tomato broth, tomato powder,  and cress comprises the next dish. The emulsion is made from the skin, and the broth made from the belly or loin. It is an umami bomb of a dish lent by the sodium in the pork and the natural umami in the tomato, though a little too sharp at times, with the emulsion, broth, tomato and tart strawberry all lending their punch. It's a very tasty but hard hitting dish, especially after the more genteel white fish that preceded. This being said, the Chablis balanced it out perfectly. 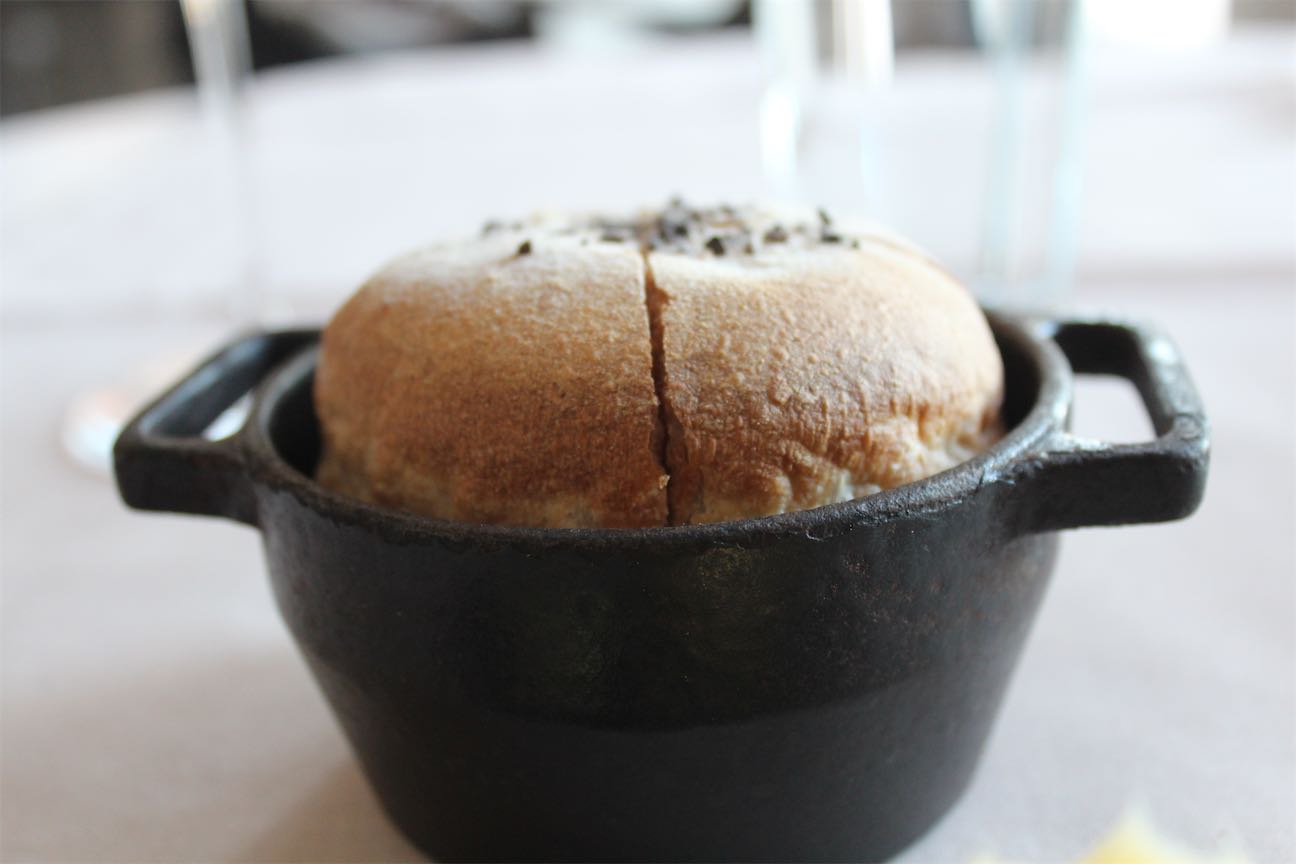 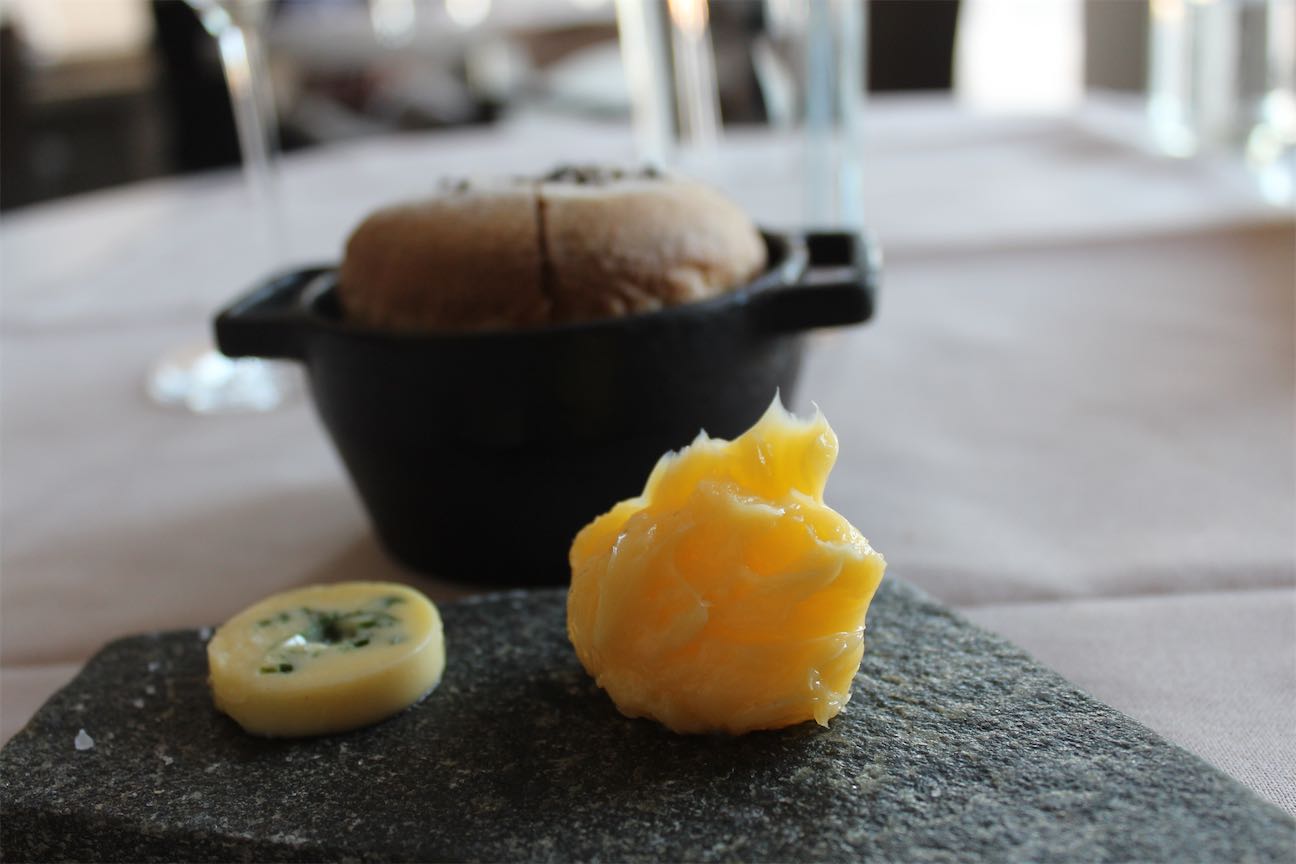 What was perhaps the most impressive component of the whole meal was the next course: the bread. A deal-breaker at the best of times, the bread that is served at Restaurant Olo is easily the best bread I have ever tasted. It sits ambiguously on the table upon arrival in unbaked form, and is then whisked away after the snacks. It returns perfectly golden and crisp, nestled in the cast iron pot it was baked in. Making a course of the bread is genius, and the carb fiend within me rejoiced. You really have to believe in your bread to do this. Being the centre of attention for the entire duration of ten minutes-ish says a lot about how assure Olo are of their product. The bread was stunning. Crunchy and soft, and when coupled with the heavenly country butter from Suonenjoki, it was paradisal. Extraordinary how much the simple salted butter resembled cream yet entirely retained the profile of butter. Highlight. 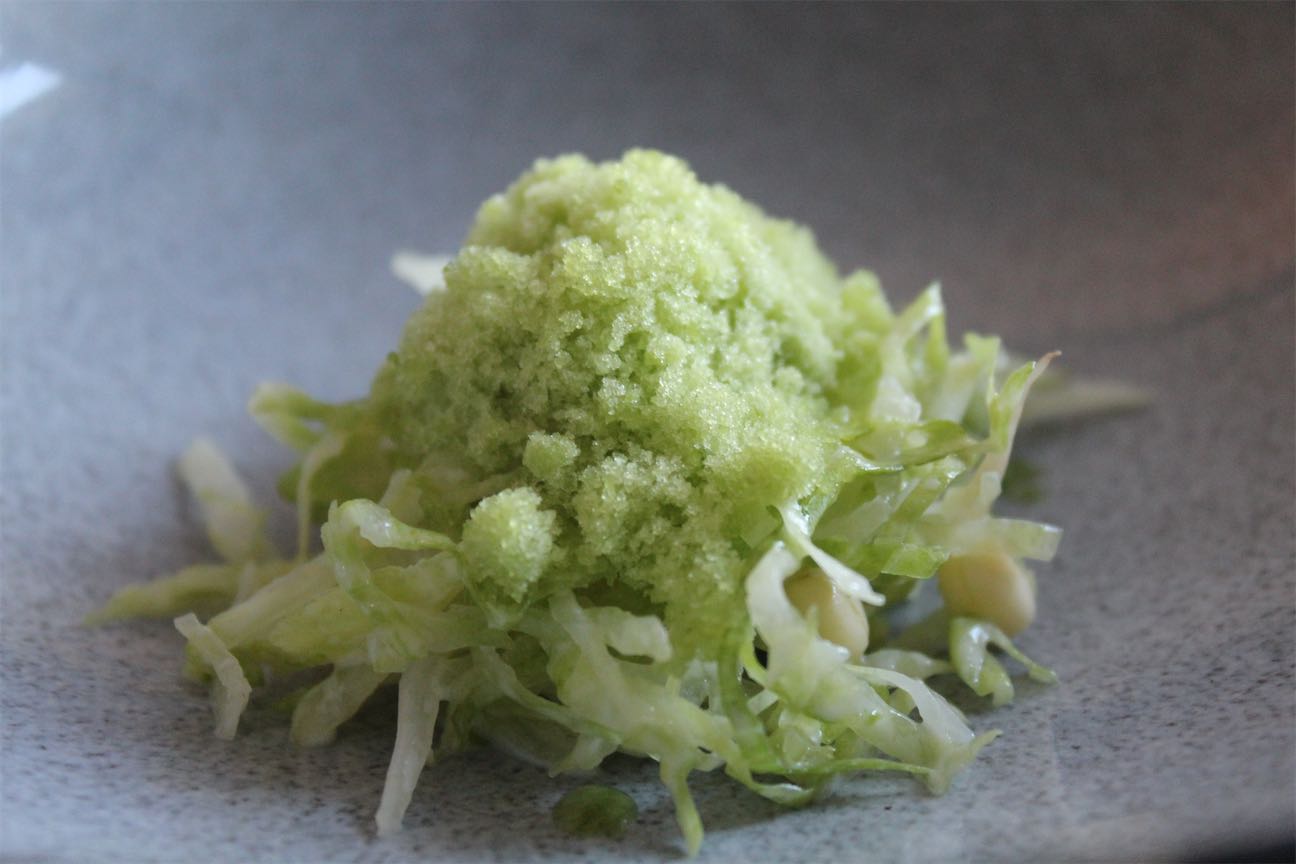 Lettuce, sour milk gel, verbena granita, and homemade goat's cheese coated in a buttermilk vinaigrette is next. There seems to be a touch of thai basil and it is all pleasant. 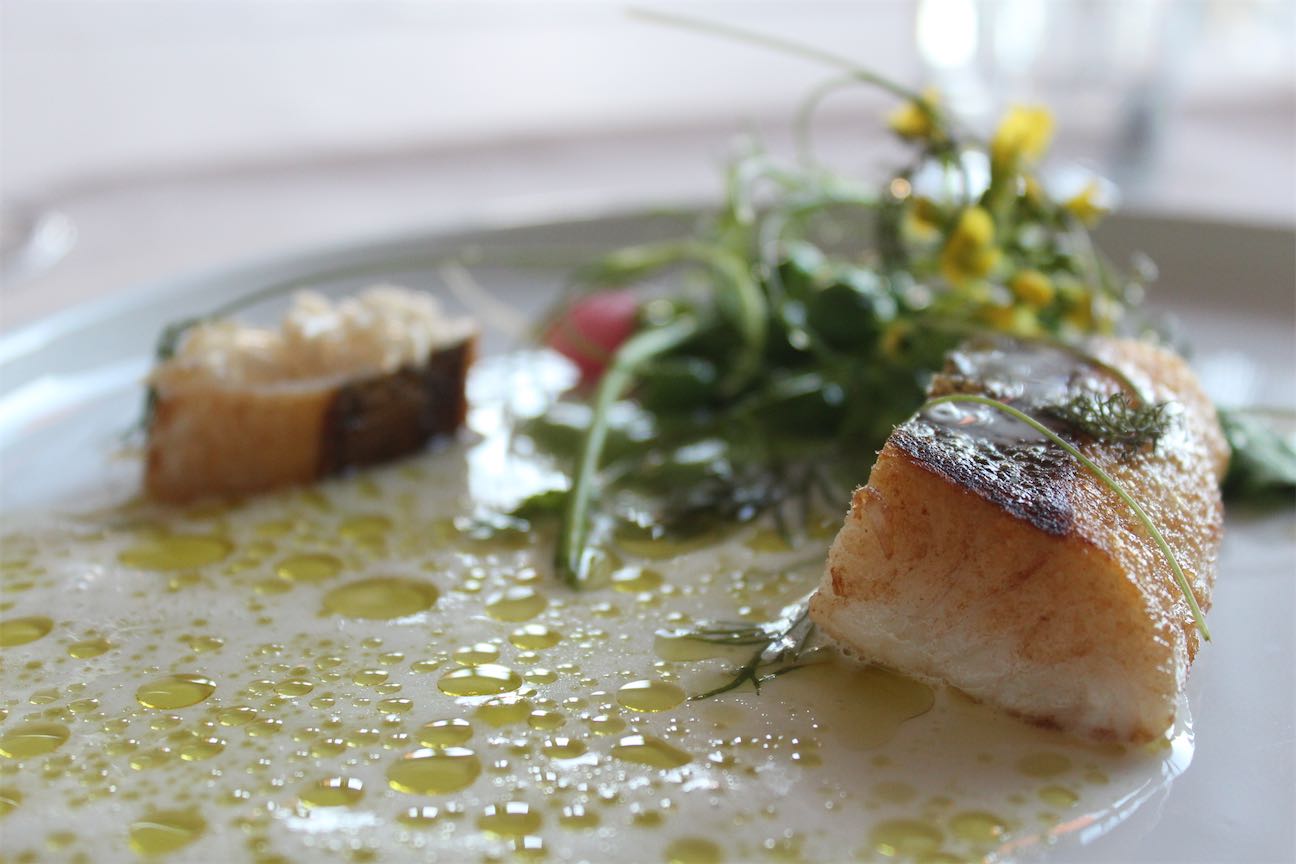 For the following course the waitrons served the sauce from a silver saucepan–a nice touch. Taking away from the glass and ceramic vessels that have come to haunt fine dining establishments and their servers, the silver saucepan reconnects diner to kitchen, reminding us of the labour that have gone into each dish. No dry ice or transparent teapots here. It is perch, pea purée, broccoli flowers, whey sauce from cheese. The peas are barely cooked, leaving them with a slight bitterness that becomes essential to balancing out the heavy whey and fish. The fish is cooked so well, to the perfect consistency in a butter that coats the whole thing in an apex of a main course. 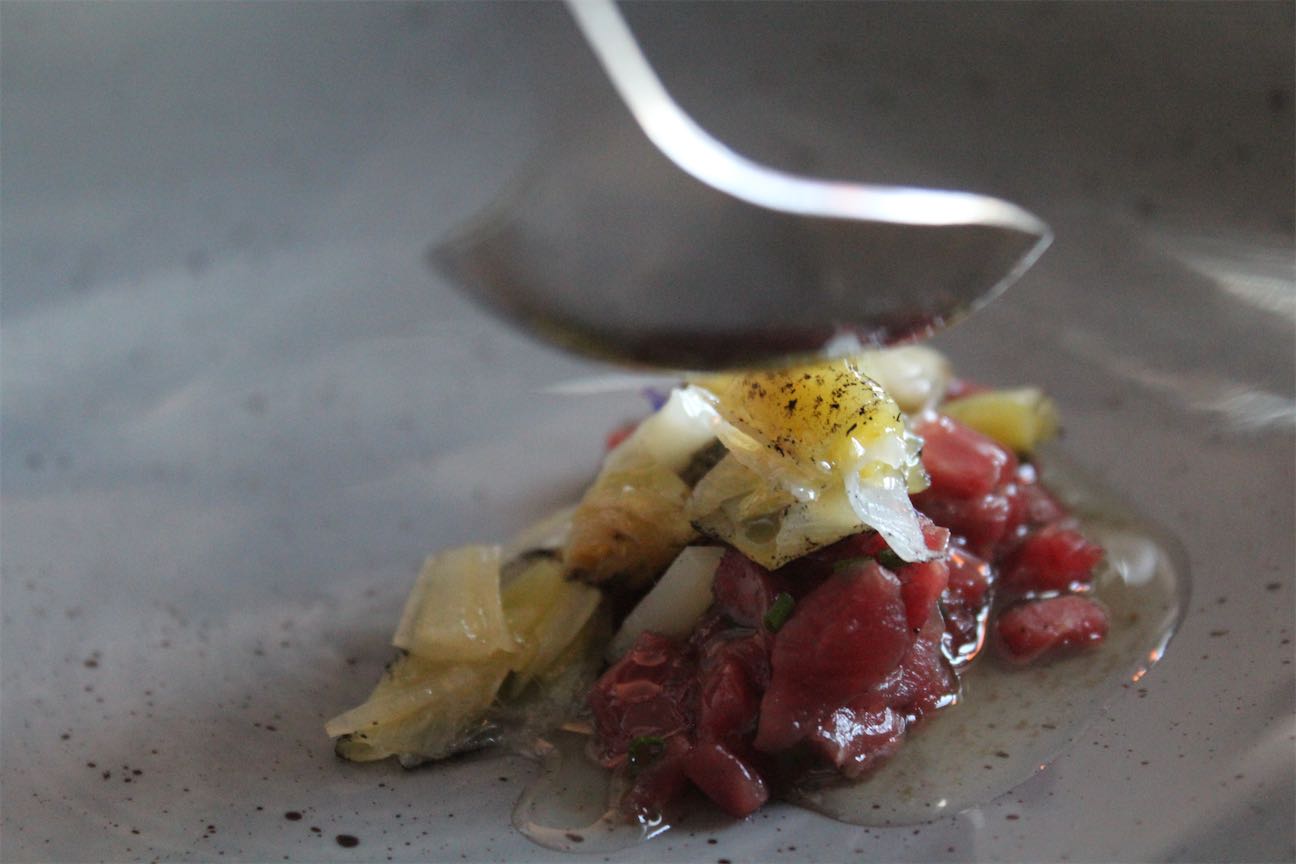 Hereford beef tartare with charred leeks and a reduction of tail broth and bone marrow oil. The beef is clean and perfectly seasoned, with leeks and pickled onion popping through just when they're needed. It's sweet, deeply savoury and highly memorable. It was so ideal that it would not have been a huge loss to miss out on the last course. Though it was cooked superbly, and the flavours were rich, it seems a shame to divert away from Scandinavia after being entrenched in the eating philosophy for so many preceding courses. 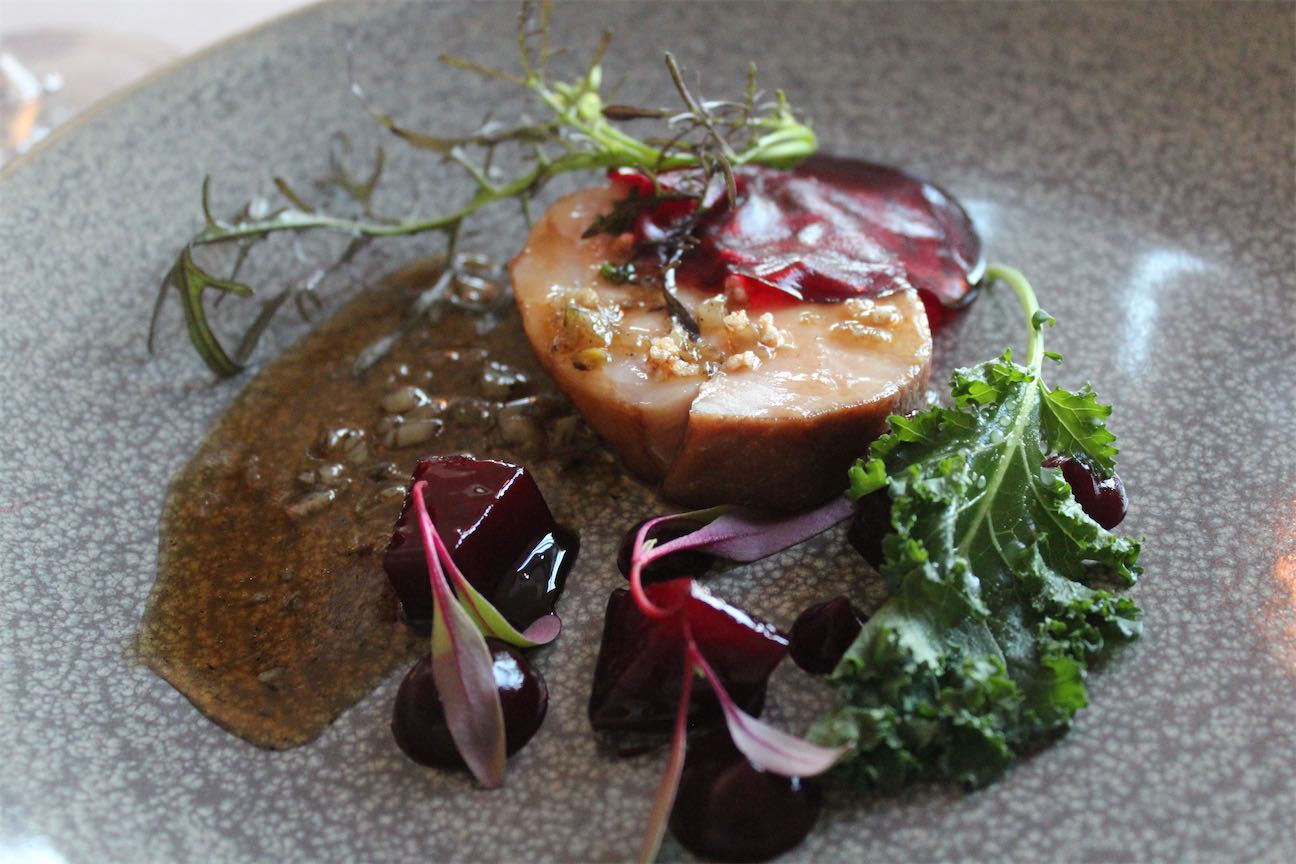 The black pig from France is of superior quality no doubt, but the flavours of beetroot, kale and mustard leaves do not wow. It would be more impressive to end on the note of the tartare. 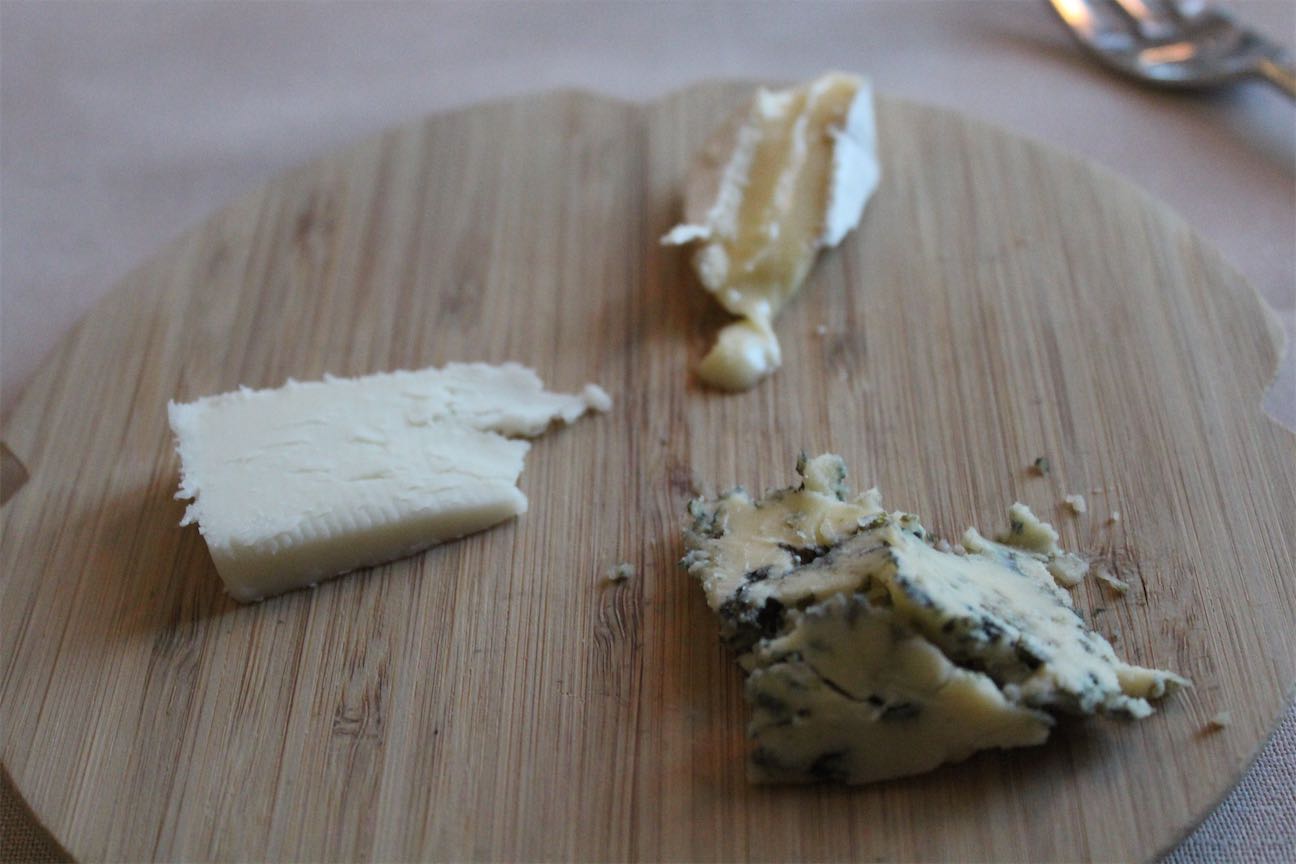 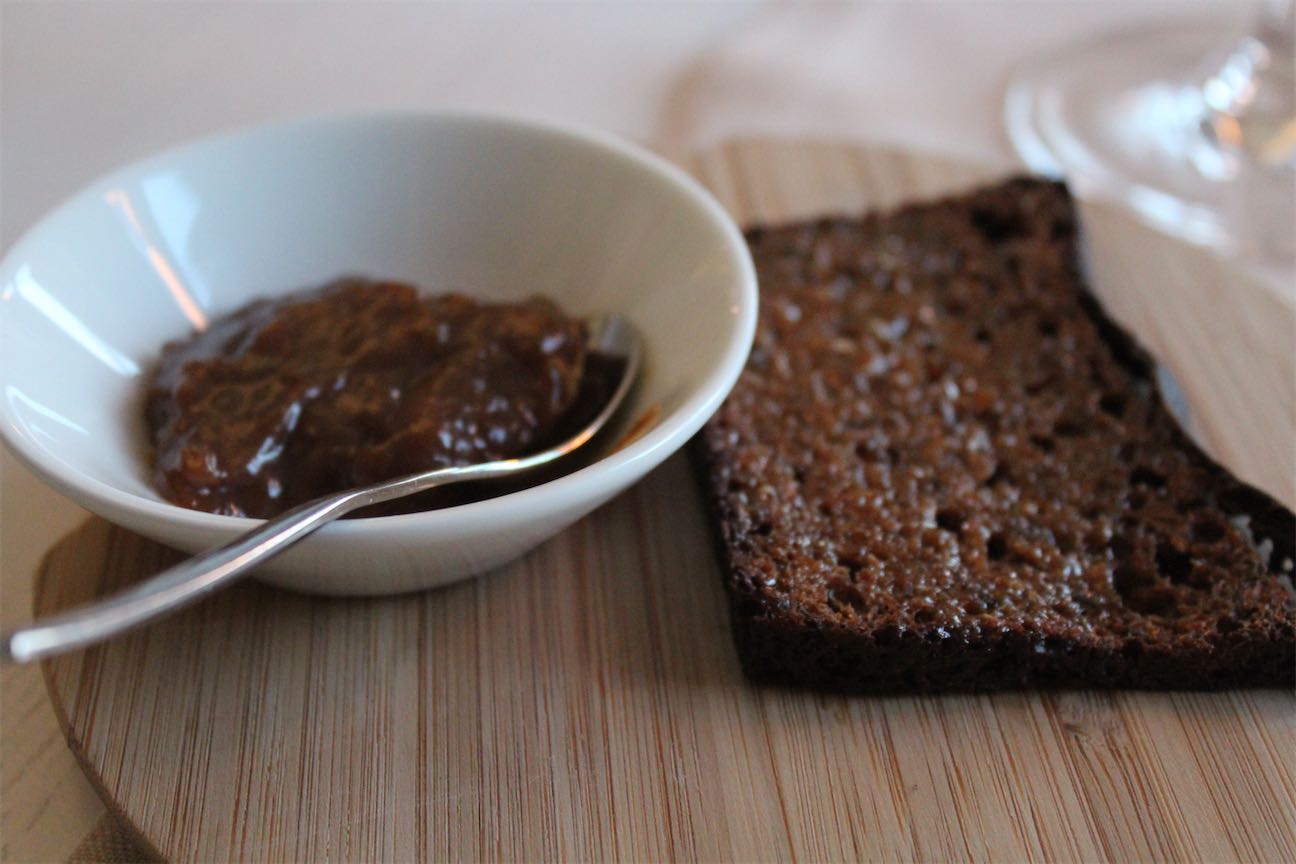 The cheese course is sublime. Malted bread with an onion fudge and three cheeses. One imitating Roquefort, one goats milk cheddar and one Camembert lookalike made with cow's milk. All alive, all pleasantly pungent. Originally I gawked at the fact onion chutney could now have so many names as to also encompass fudge. But the state of the war was that this very much was a fudge. Butter sugar and onion collide in a richly sticky onion toffee, which when folded over malt bread and eaten alongside the sharp goats cheddar is euphoria. 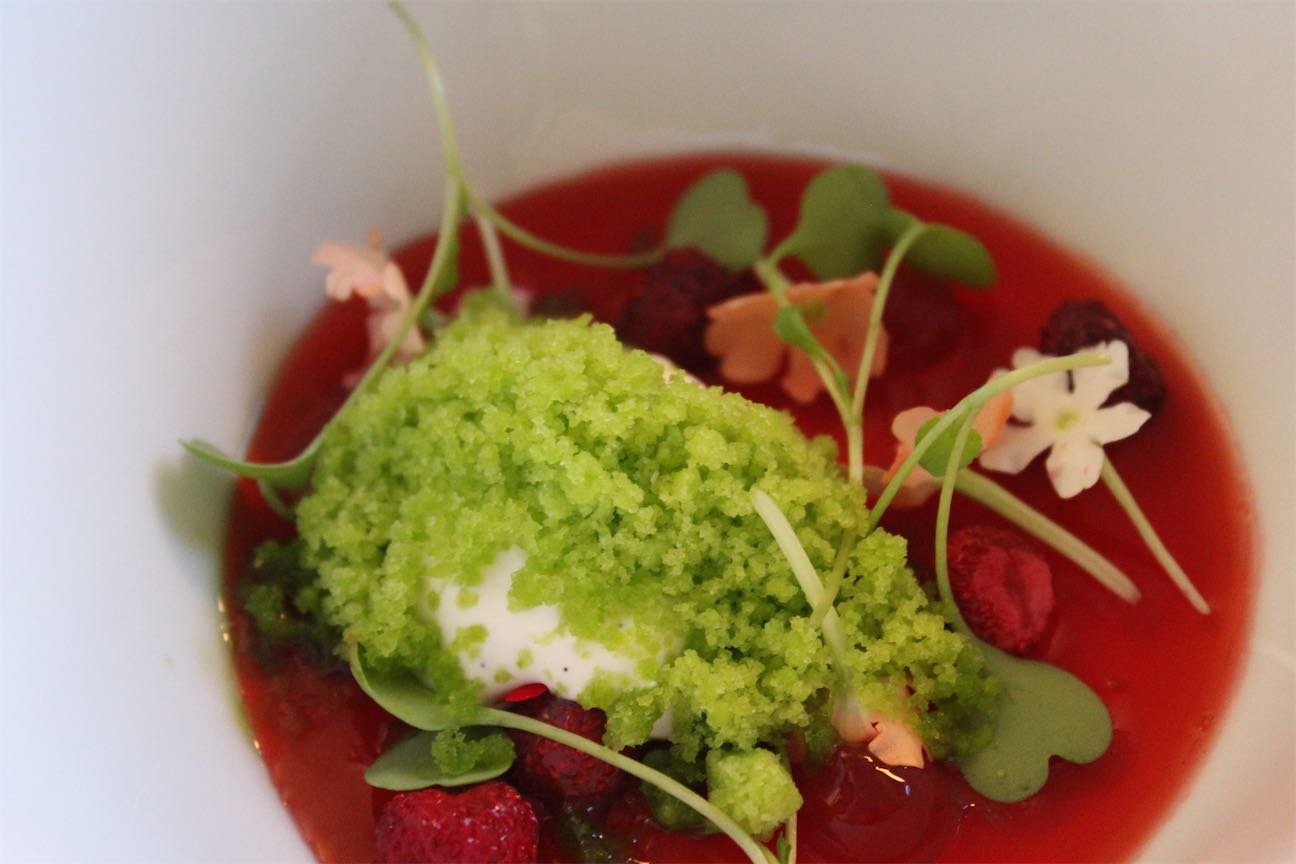 Wild strawberries show up in a gelatinous layer underneath vanilla cream and arugula sorbet. It's a delight and feels as though you're eating jam without all the jarring sweetness jam usually brings. More of this on croissants please. 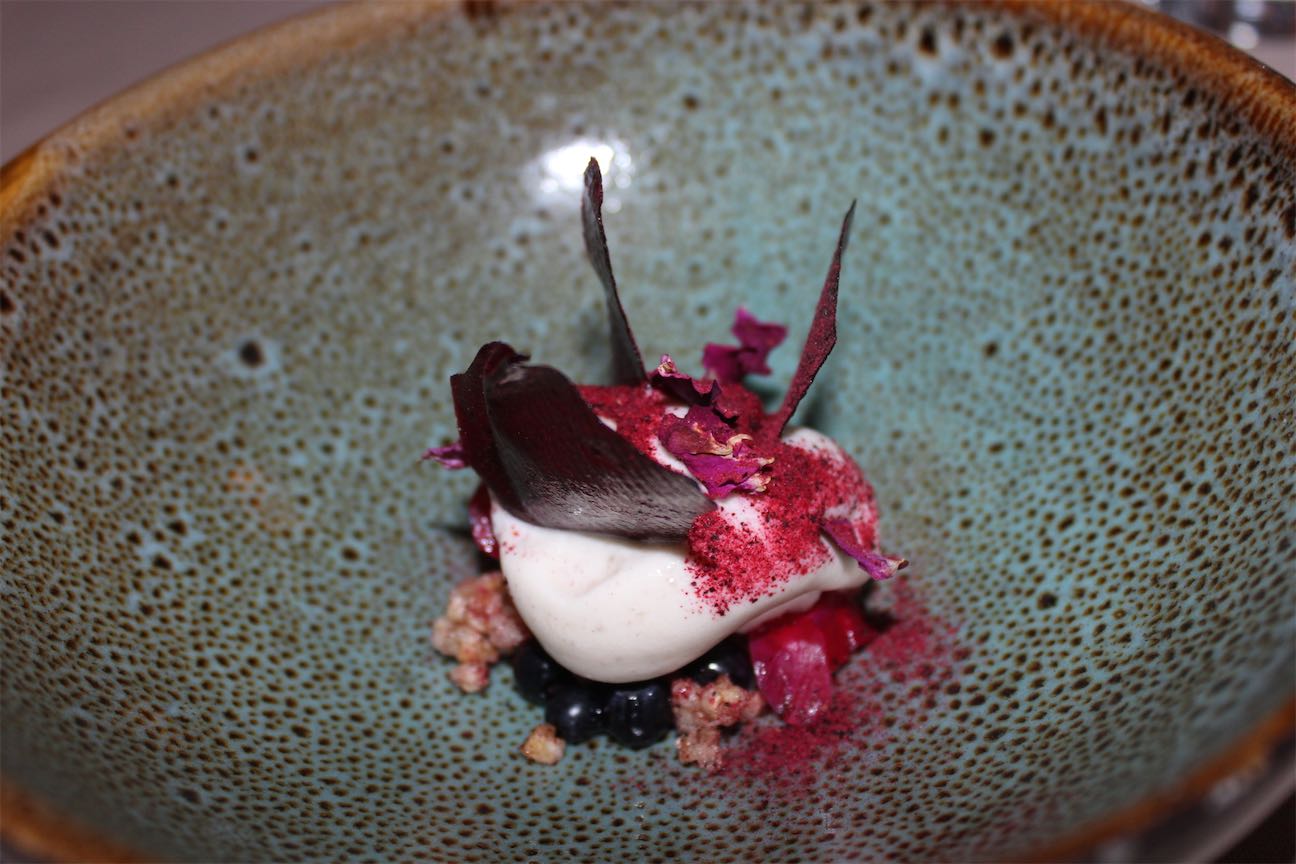 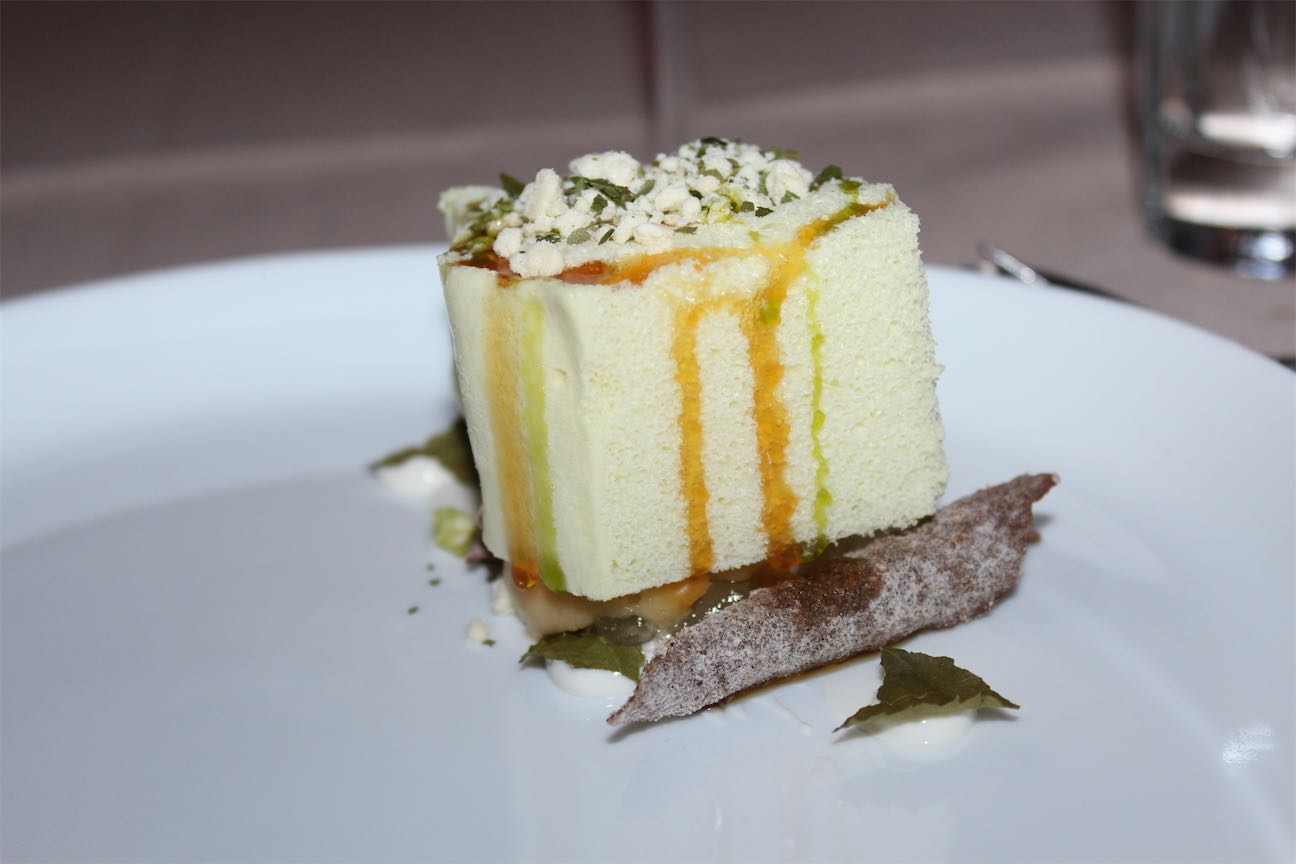 Birch, on the other hand, was stunning. An aerated birch oil parfait that was doused in malt, whey jelly and birch sap sorbet, this really was all about the birch.

Eating at Restaurant Olo is a tour of Finland and the greater region through food. It is all of skilled preparation and a head nod is owed to chef Javi and the team, who have crafted an experience that is polished without being dry, authentic without losing world-class standard, and unlike any other meal I've experienced. In Helsinki, this is a restaurant which tells the local story. 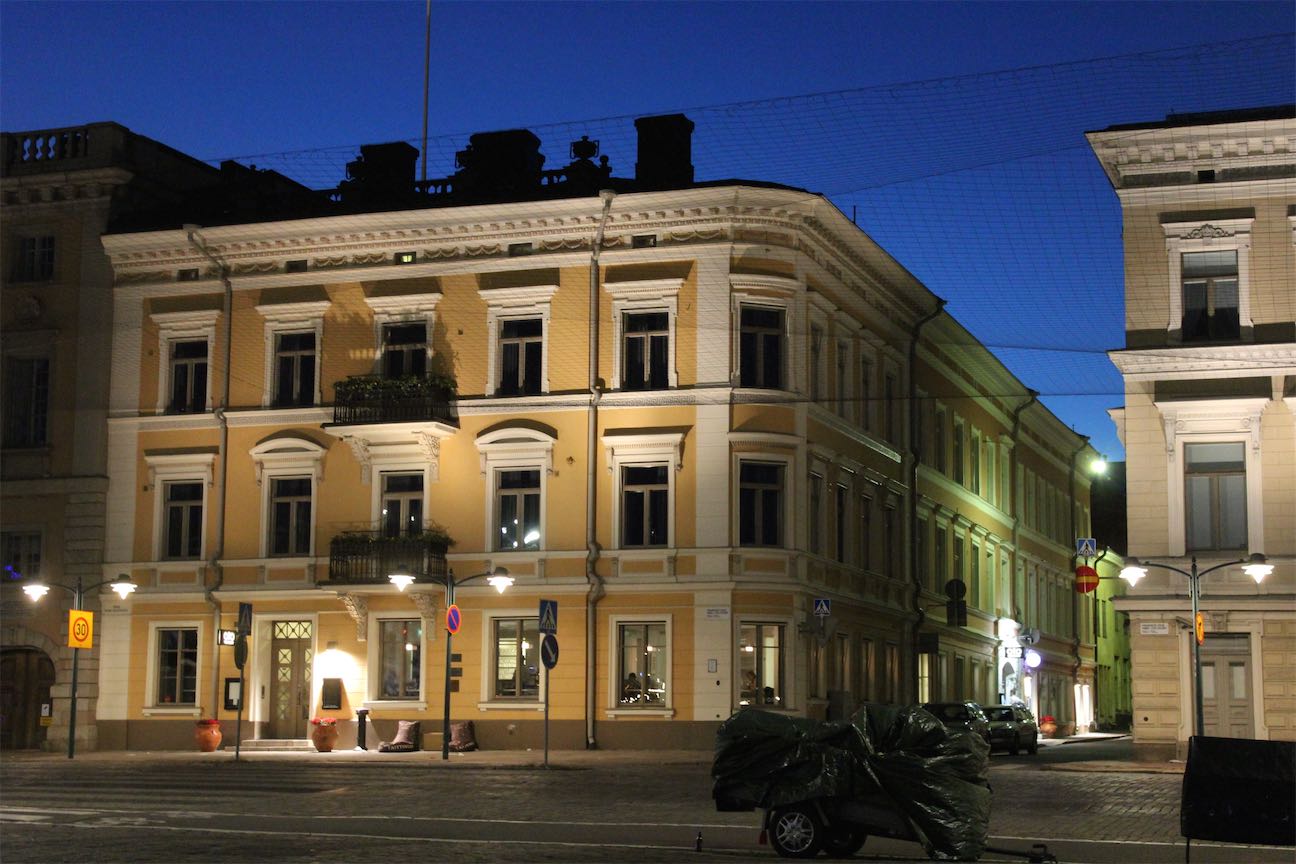